Dan is usually fine to just go along with whatever I have planned on our trips, but this time he had a request: he would like to visit Dracula’s Castle in Bran. Bran was just south of Brașov, about a three hour ride. That sounded like a fine destination to me, so off we went!

The morning was cold (4° C) and the road followed the bottom of a long, wide valley. The roadkill tally continued, with foxes and dogs being the most numerous victims. It was three hours to get there in the most direct way and fortunately the temperature gradually increased as the sun rose further in the sky.

Selling goods along the road 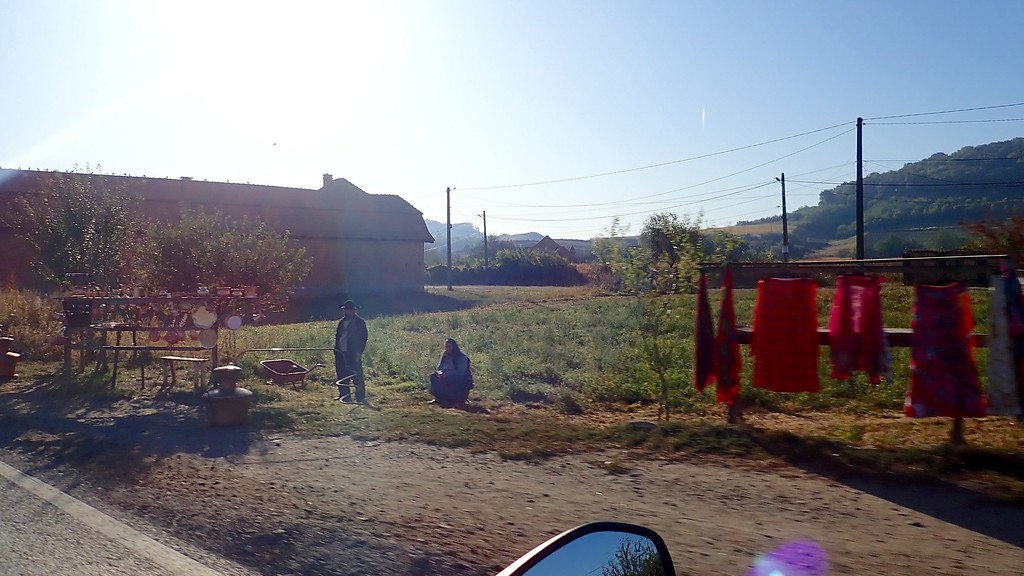 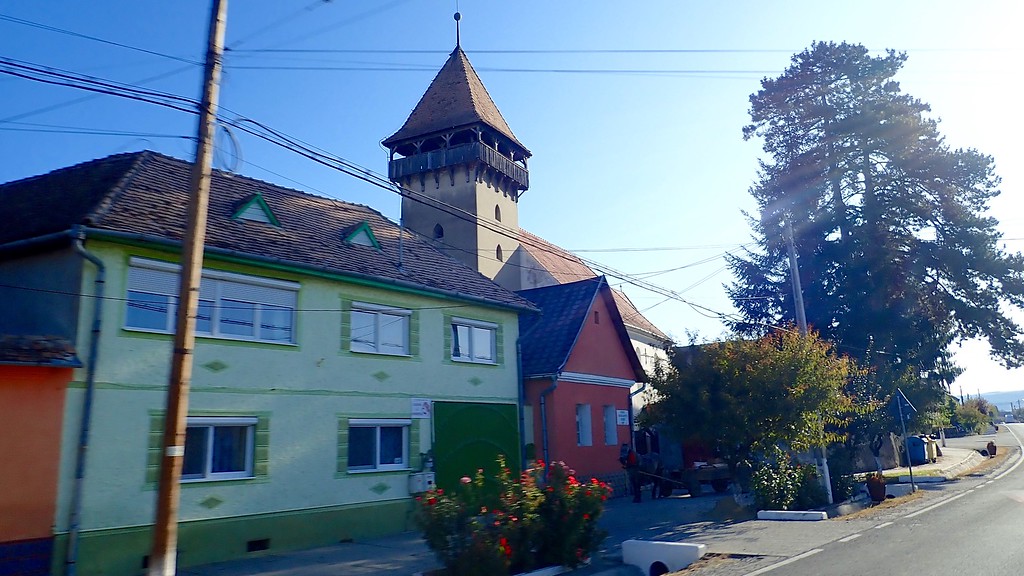 Whew – barely caught it as I zipped by

As I had mentioned back in Slovakia, there was very little evidence of animal husbandry in this region of Europe. I couldn’t recall seeing anything in that vein before spying this field of sheep – complete with shepherd and sheepdog!

The citadel on the hill caught my fancy immediately. It was visible for a long time before I got close enough to even recognize it for what it is: a massive fortress overlooking a scattered village. I made a note of our location and that I would look it up “later”. Now that it is “later”, I have learned that the fortress dates from the 1300s, although that is the date of the “modern” fortress visible today. The history goes back much further, including when the Romans defeated the previous defenses that had been built on the hilltop.

The road wound through some mountains, with a small well-paved pass in the middle of a forest. Traffic was fairly light and the road fun. 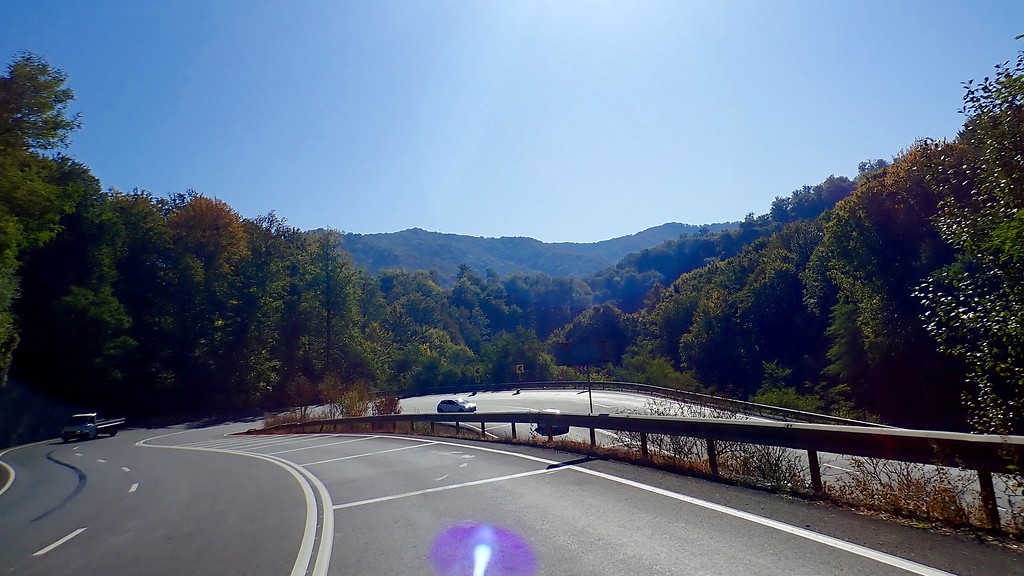 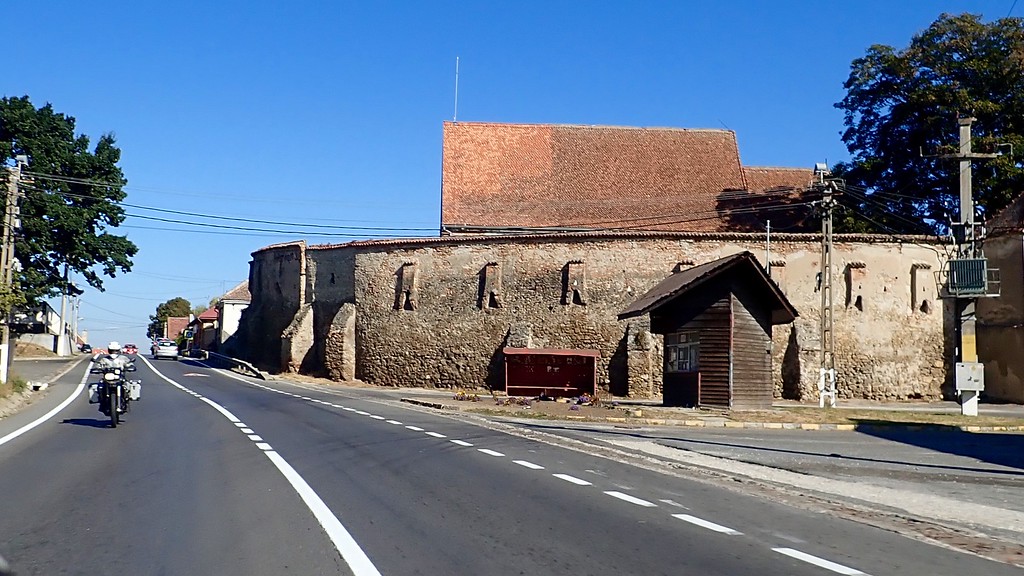 I love these power poles and insulators 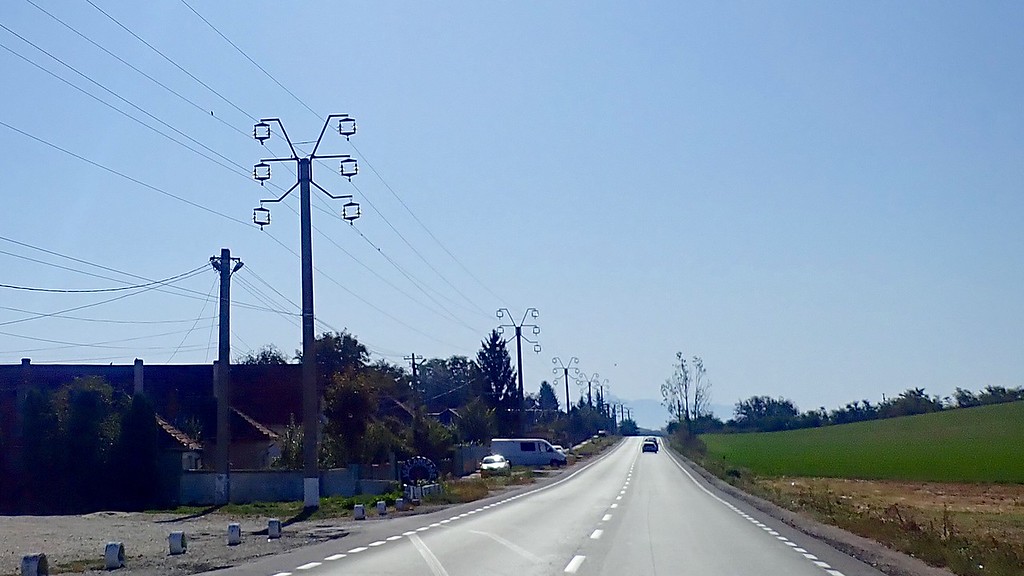 As we skirted around Brașov and headed south, we were almost immediately stopped by construction traffic. It was a long stop, and upon resuming, it was an even shorter period of time before we stopped again. And again. And again. At one point we cut to the front the stopped traffic and nipped in closer to the construction, but it was still a long time before we finally reached Bran. 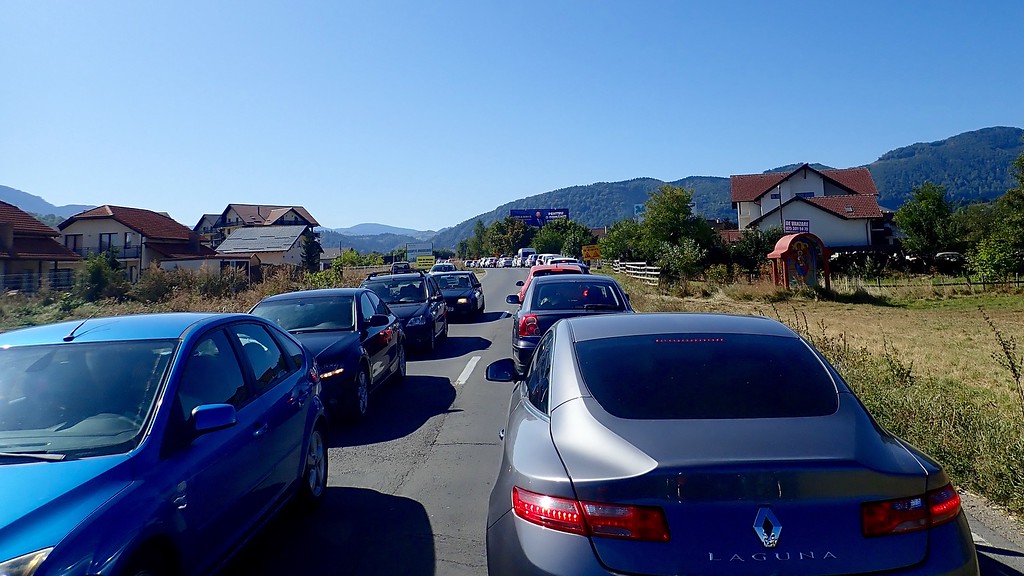 The town of Bran was surprisingly non-commercial, but the area at the base of the castle more than made up for it. We found a place to park the bikes (no free parking here!) and stashed our gear for a more comfortable walk around the castle and its grounds. The castle itself was surprising in its stature: I had always assumed that it sat high on a mountain top, majestically looking over the small town at its feet. But no. Instead it was on a bump of a hill, a metal fence encircling it at the street level and power lines running across the grounds.

Dracula’s Castle, in all of its glory

As we approached the castle grounds entrance we found ourselves suddenly enveloped in a mass of people and market stalls. The amount of kitsch and cheap goods that clamoured for the attention and money of those who loitered were overwhelming. The Dracula “brand” had been commercialized to an obscene extent and it was very distasteful. Dan looked into buying tickets to enter the castle and we both agreed that it was not worth it. Again, most of the things that I had read online made mention of the tour being hollow, in the sense that very little of any original furnishings or memorabilia.

After an hour or so of walking around, looking at shops and considering what we wanted to do, we eventually returned to the bikes and got ready to head back. We still had a three hour return journey, and it was a beautiful day for a ride.

Some of the shops did have fun stuff for sale, at least

I checked the map and found an alternative way back to Mediaș that would avoid the terrible construction, and it turned out to be a much better route than our arrival. The roads were rough and remote, and cut between rounded tree-covered hills; they were just what we were looking for.

Grazing horses at the side of the road

Gorgeous day for a ride

Leaving the hills behind

Something that I noticed on this trip was that the further east we went, the more likely our bikes were to get a reaction from the people we passed. I’m somewhat used to little kids staring and waving, but normally the adults never even turn their heads. But as we got further and further away from home, the more likely we were to turn everyone’s heads. It was an interesting feeling.

Still in the land of horse and wagon

Crashed car I had noticed the first time we passed Rupea

On the way to Bran I had noticed another fortified town at the top of a hill and, in looking at the current time and our travel time, I estimated that it would be a good place to stop for an early dinner. Dan disagreed at first, but when I pointed out that by the time we got back to the hotel it would be late, and we’d be stuck eating at the restaurant there yet again, he relented.

Sighișoara came into sight and I found ourselves a spot to park at the base of the hill. I really knew nothing of the place other than “it looked cool!” as we had ridden by earlier. Now it was time to find out of my instincts were on target.

We kept our gear on for this exploration, as we really didn’t intend to spend much time here. Of course, that also meant walking up the cobbled road to the town walls in all of this gear. By the time we reached the top I was rather wishing I’d at least left my jacket on the bike.

The town was typical of most medieval towns I’ve visited: tall towers, gates, narrow cobbled streets, cozy shopfronts that sold magnets and wooden swords. It was charming, but not completely unusual in my experience. Perhaps if we had spent more time exploring the nooks and crannies (and walls and towers) I would have a better appreciation for this ancient town. But it had been a long day, our gear was inconvenient, and Dan’s patience thin. I would definitely recommend others to visit.

A lovely day for a wedding

We found a restaurant (Terasa Cafe La Scara) at the end of one of the streets and decided when we were done that we would climb the steps (The Scholars’ Stairs) the rest of the way up the hilltop. From the website: “built in 1642, the covered stair-passage was meant to facilitate and protect schoolchildren and churchgoers on their climb to the school and church during wintertime. Originally, the stairs had 300 steps, but after 1849, their number was reduced to 175.”

View from the top 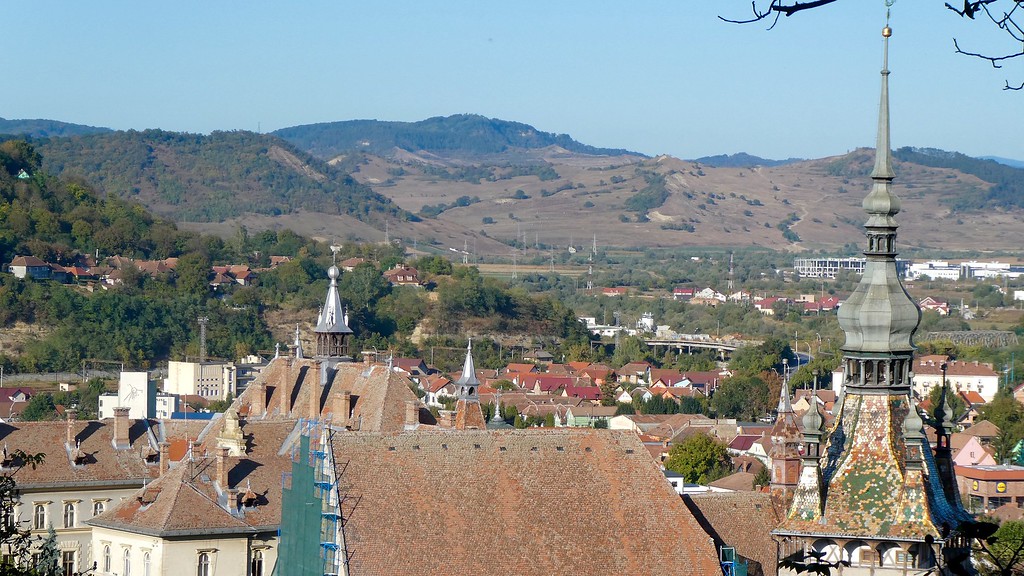 The church and the school at the top of the hill

It was a short ride back to our hotel and a quiet evening for once. We planned to hit the road in the morning, moving to a different spot for the next night. I had some planning to do, to find an appropriate place – and how we’d get there. This was also the apex of our trip: from here on out, we’d be heading home. The Black Sea was not reached, but no worries: we were having a great time with what we were seeing. And there would be plenty to see on the return trip, I had no doubt.