Northern Hungary really wasn’t much different than southern Slovakia. Corn and sunflowers greeted us once again, the landscape stretching out flat as far as we could see. While reading this, you might think that this trip is falling woefully below my expectations. On the contrary, it was exactly what I had been looking for: seeing what these “relatively unknown” countries were like with my own eyes. I had no idea that sunflowers were such a prevalent crop, or that there were so many foxes to be killed on the roads, or that houses might not even have a front door. Little things like this are what make traveling rewarding.

Today would be a long day in the saddle, but it would be worth it (I hoped!). Small villages dotted the Hungarian plain, giving us a bit of variety as we headed for the Romanian border. It was interesting to see the number of people on bicycles in some of the villages, clearly one of the more reliable ways to get around in a country that was lacking reasonable public transit or the luxury of a car.

No, I have no idea how to pronounce this…

My first interaction with a horse and wagon driver: he was motioning for me to pop a wheelie! 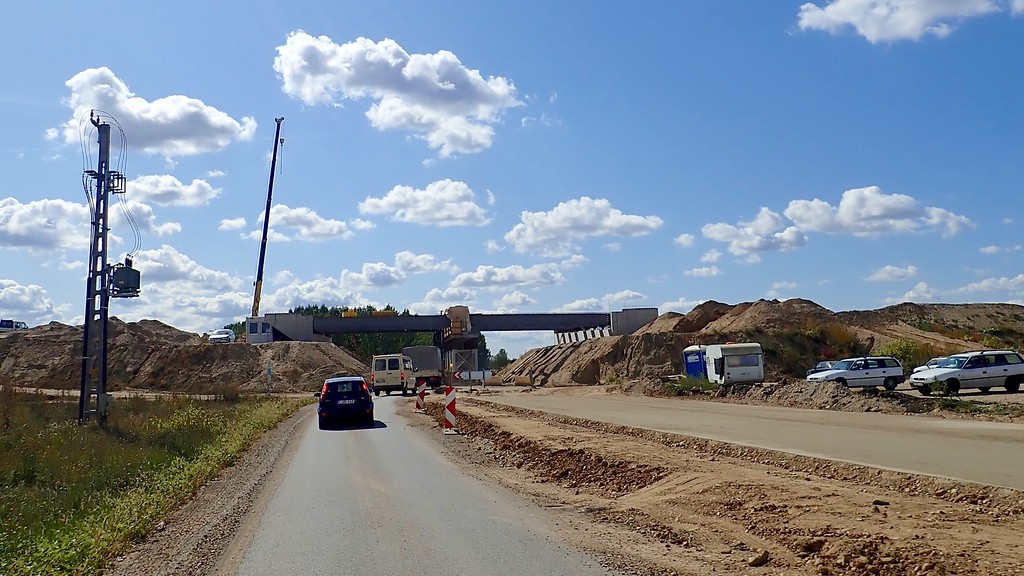 Other than a short break at the side of the road for a “tank bag lunch”, there wasn’t much to note on the rest of Hungary. Well, other than there was some really nice clouds in a cheerful blue sky. 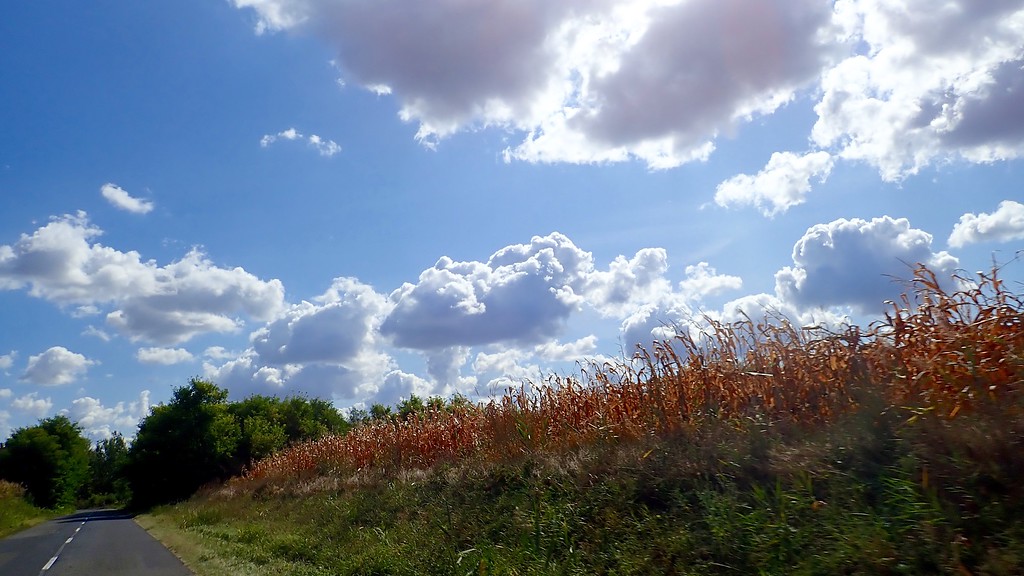 It seemed like a long time before we reached Romania, but once we crossed the border, everything changed. But first, we had to cross the border, and my American passport was causing a bit of a delay. It wasn’t anything serious, but the border guard had to take my passport and do whatever it is the border guards do in their little booths. And Dan made use of the time by going over to the little service hut to inquire about a vignette, since we’d be now taking high-speed motorways to get to our destination. What Dan found out, however, is the motorcycles don’t require a vignette. Hooray for motorcycles!

Yay! No line up at the border crossing 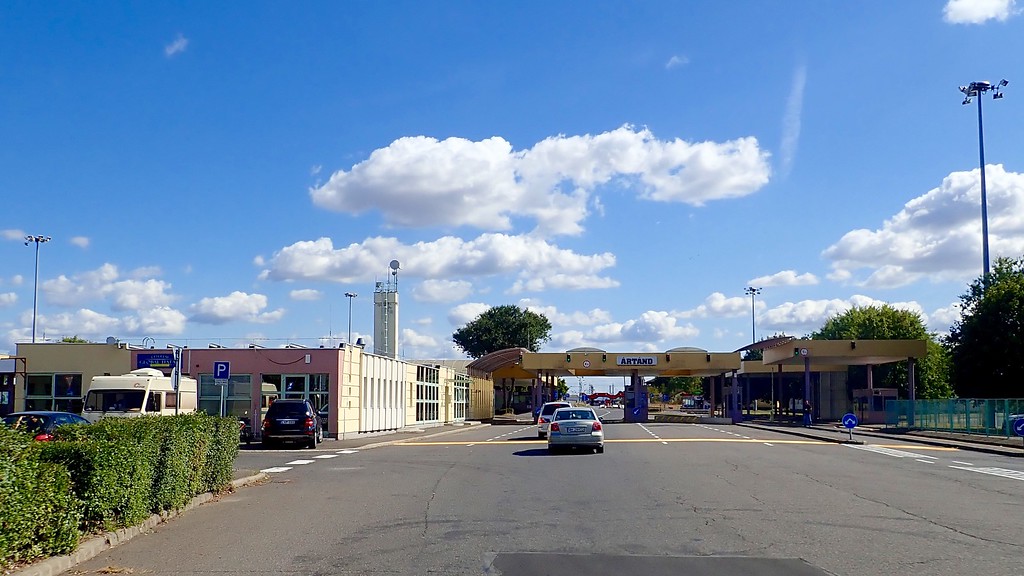 Oh, hello there. I see you peeking out!

We don’t need no stinkin’ vignettes where we’re going! 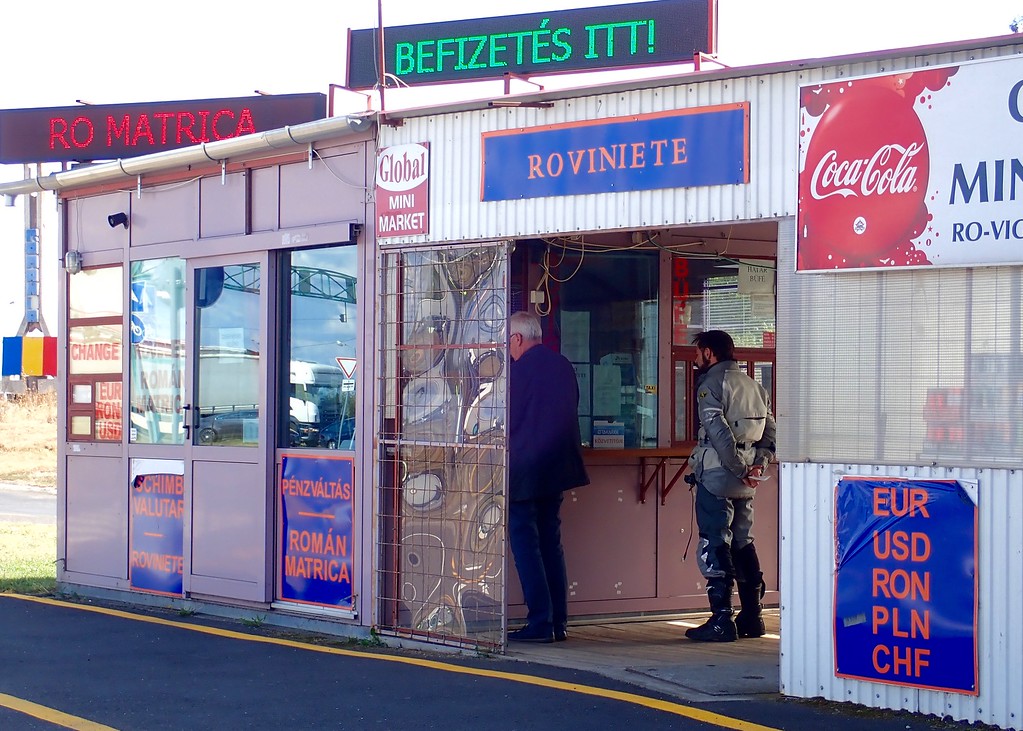 What was really noticeable was the sheer number of “anti-corruption” signs and billboards as soon as we crossed the border. That, and the total chaos that is called “Ordedea”. This was the biggest city that we had been during this trip, and that coupled with the “less-restrictive” driving habits of the Romanians, made for a challenging passage. Dan asked that I keep both hands on the handle bars and leave the camera in the tankbag and to make him feel better, I did. So… no photos; I had to wait until the roads opened up. 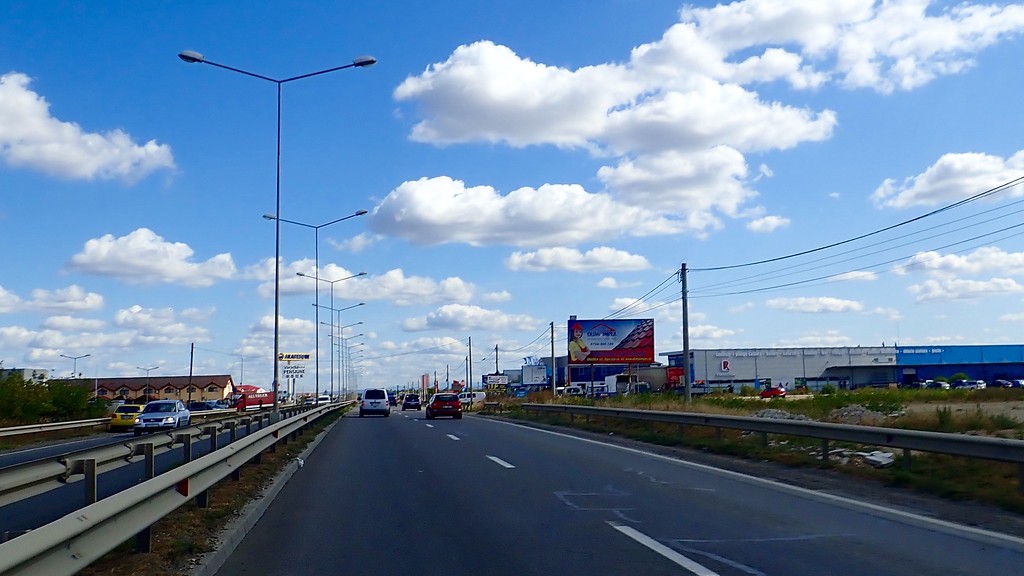 Neighborhood on the edge of Ordedea 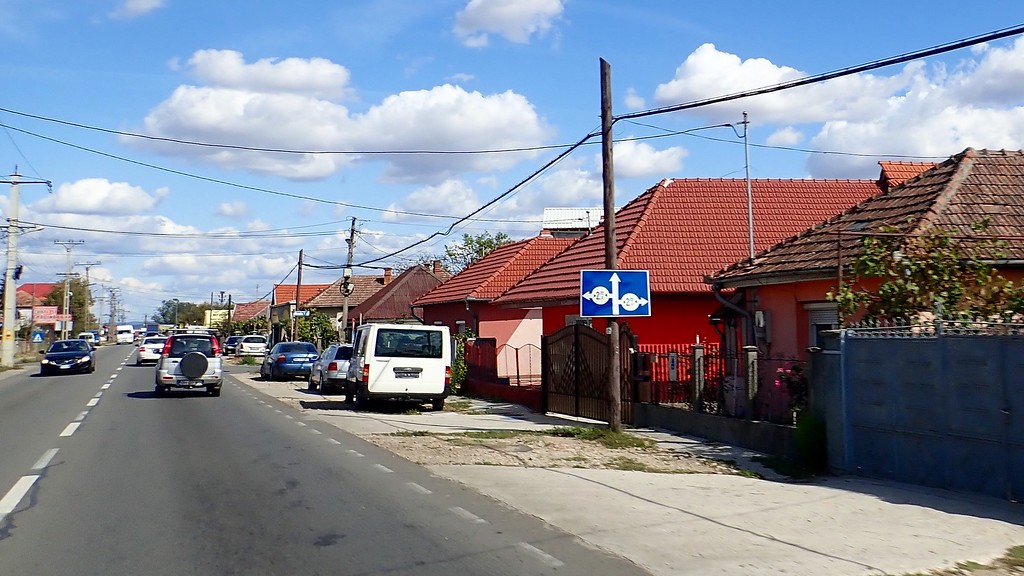 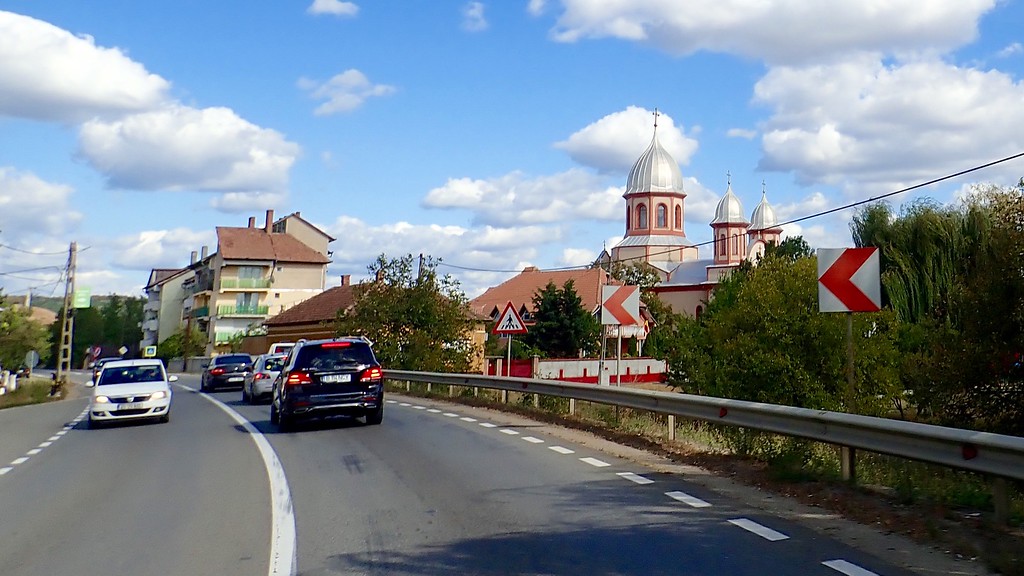 We’ve moved on to “hidden doors”

Now we were free of the city and back into the countryside. But those “fast roads” that were promised on the GPS were not to be found. Instead, we were stuck on E60, a two lane road, passing through numerous towns, along with every vehicle that was trying to get to Cluj-Napoca – and that was a lot of vehicles. 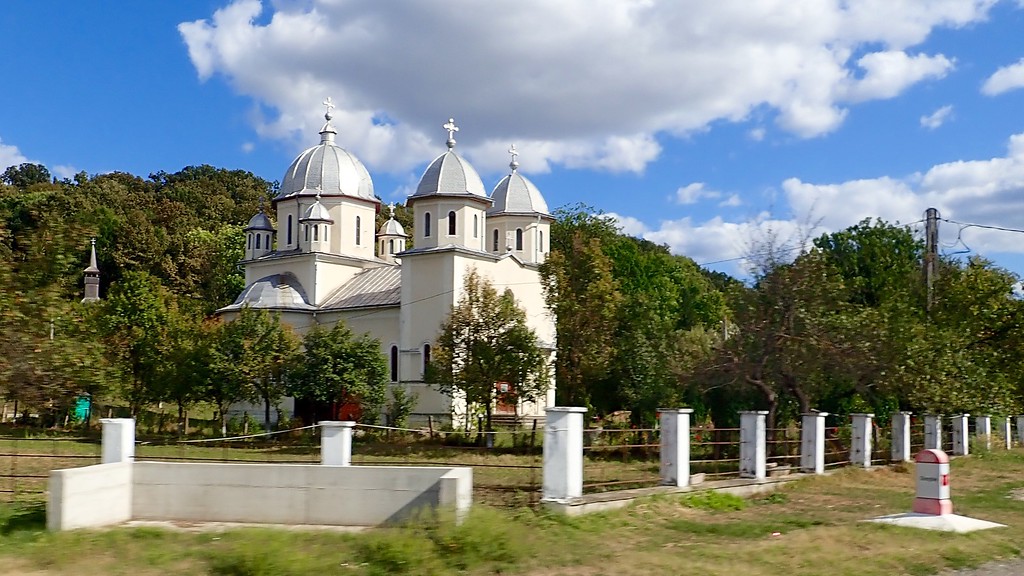 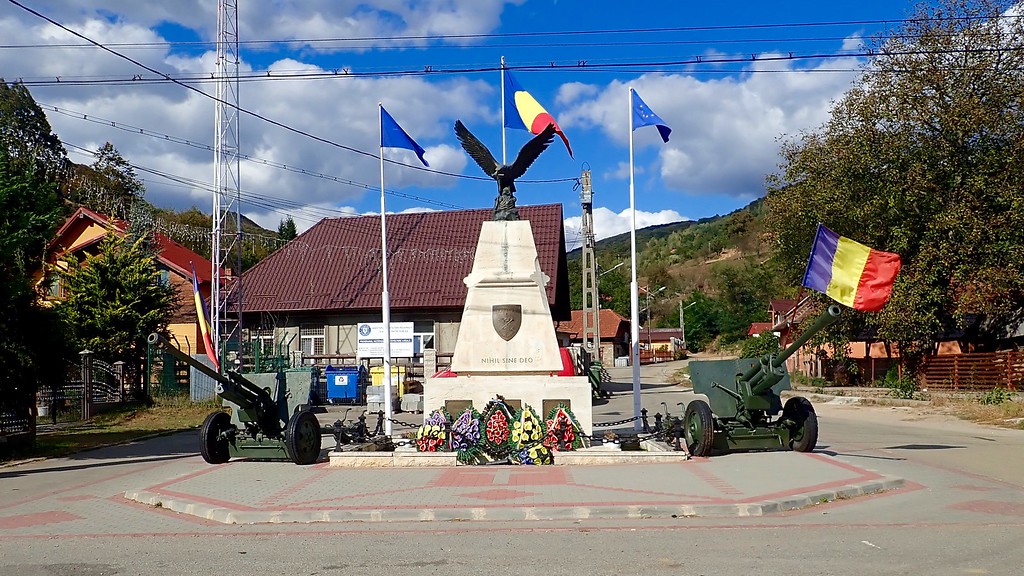 The traffic that we’d been following suddenly stopped for no apparent reason. We sat for a moment, assuming that it was just yet another construction delay, but then we realized that even if it was, there was no need for us to sit back here. We pulled our bikes around the truck in front of us and, with no oncoming traffic to impede us, we rode to the front of the line. The reason was clear: a serious traffic accident had recently taken place, blocking both lanes.

Another motorcycle was already at the front of the line and it wasn’t but a few minutes before someone from the emergency crew came over and said a few words to him. He got on his bike, turned around and headed back down the road. Dan and I eventually learned that if we did the same thing, there was a parallel dirt road down in the valley that would get us passed the accident site. We took advantage of this information – as did a number of car drivers. We had barely gotten off the pavement when we were blocked by more cars in front of us. Apparently, this same detour was being used by vehicles on the other side of the accident, and as it was a one-lane road, traffic was now at an impasse. We could go no further.

Looking over a potential detour in the valley

Taking photos while sorting our our options 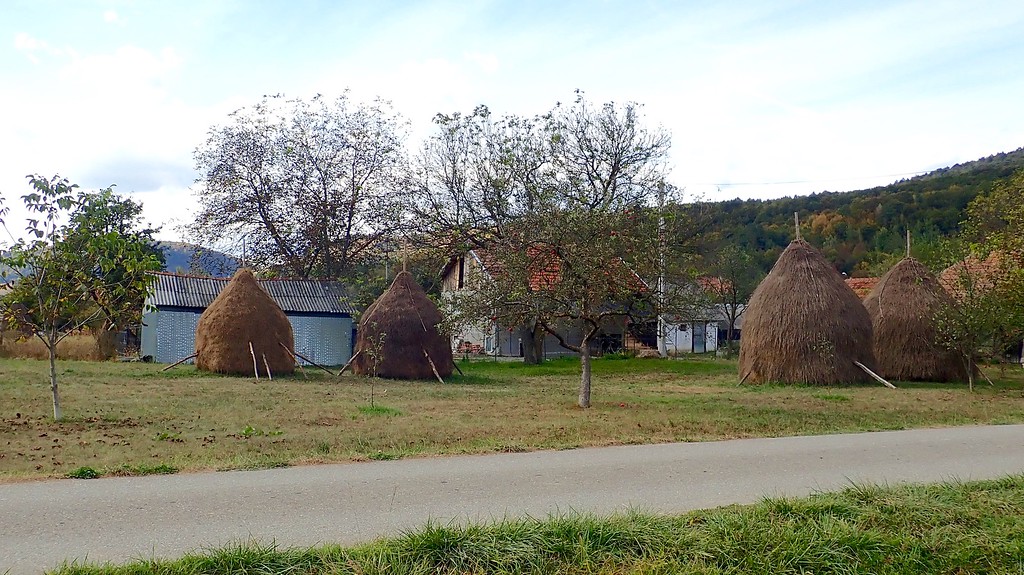 Eventually we returned to the pavement and to the front of the line. The accident scene hadn’t changed much, other than the addition of a few more Emergency response crew wandering the site. One of them saw us and came over. This time the solution was to ride through the accident scene – slowly. We did so, being careful to avoid as much of the broken glass, plastic debris and mystery fluids as possible. The line up of traffic on the other side of the accident was impressive – I’d say at least 7 km of cars, trucks and busses were parked, with many drivers wandering around in the sunshine, clearly annoyed at the delay but powerless to do anything about it. 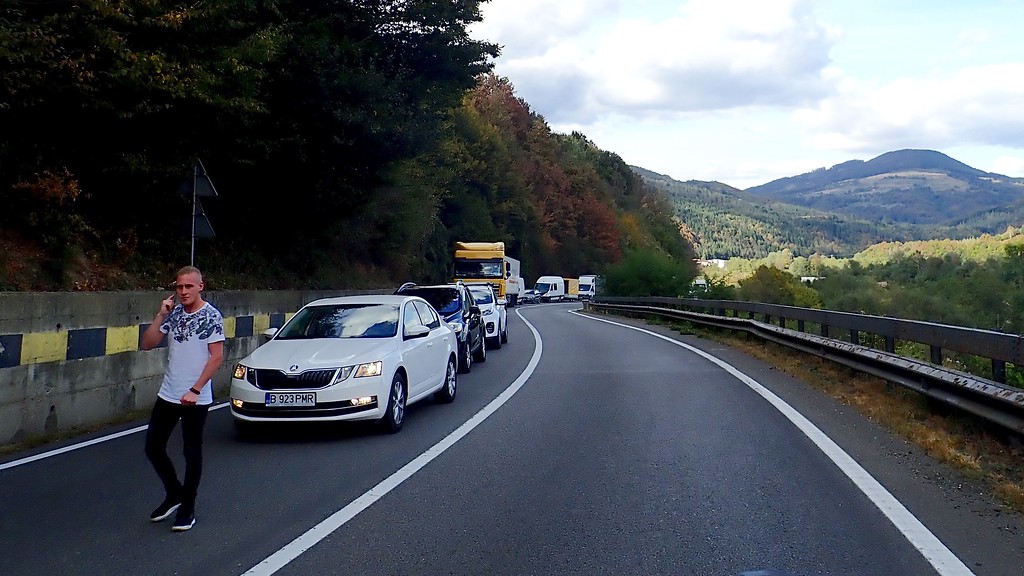 We had the road to ourselves. Everyone was still stuck on the hillside behind us and nothing stood in our way. Well, other than a continuation of curvy roads and linear towns. The towns sometimes had open shops along the street, usually selling baskets or cheap items that no doubt were made in China. I couldn’t imagine who was buying the items, as there didn’t seem to be much of a consumer market. But what do I know? I was just driving by on a single, random day. 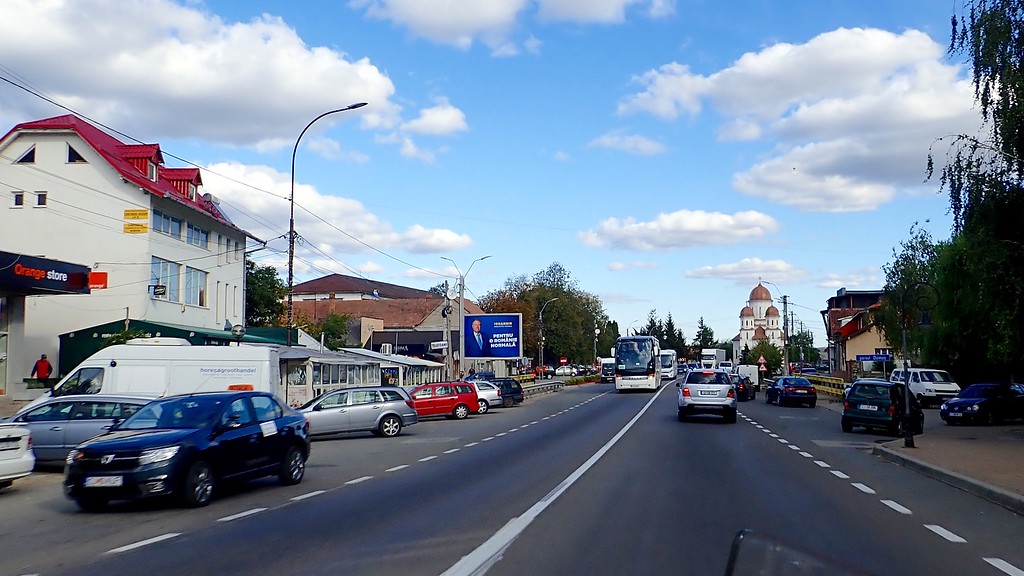 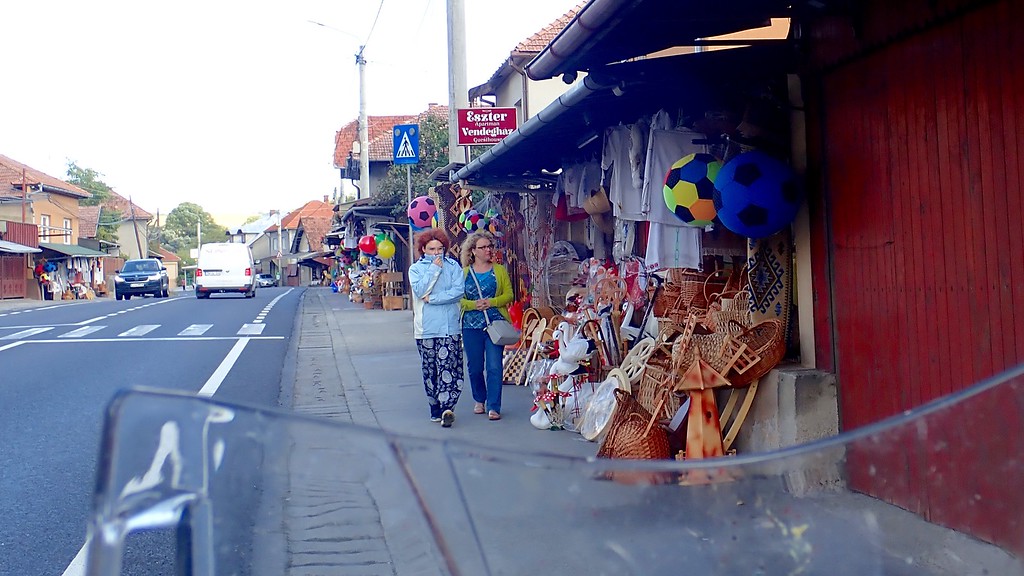 I sort of wanted to stop for a basket

The buildings were starting to get bigger and more ostentatious, but few of them were finished. I can’t find any reliable information on it, but the theory is that there is a tax benefit for unfinished structures. That is the only thing that makes sense to me, anyway.

The GPS continued to lie to me, showing a thick red line along our route. It was the A3 – not yet built but clearly “in progress”. I would say that joining the EU was a boon for Romanian infrastructure. But for now, it was just a tease of things to come. 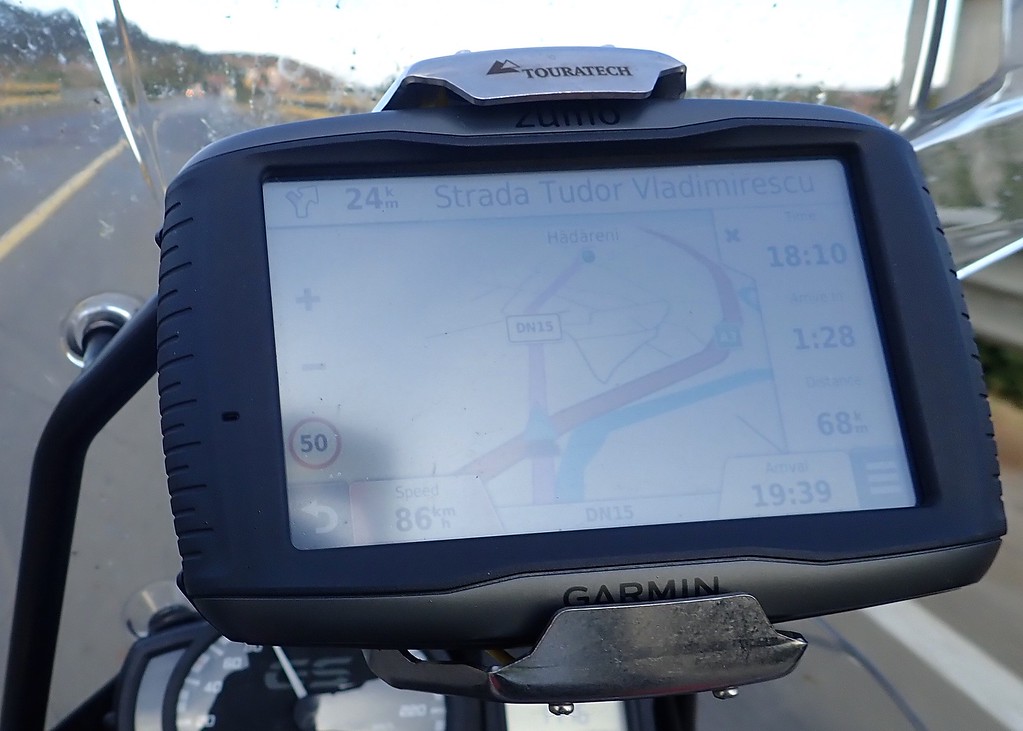 As we neared Cluj-Mopoc the A3 became real and we were able to really pick up the pace. The road kept us away from the city as it looped south, and we made a quick stop in Turda for fuel (yes, I chuckled at the name). The A3 was short-lived and we were back on the curving roads of the countryside. The sun was going down and the last thing I wanted to be doing was riding on narrow country roads in an unfamiliar region in the dark. Especially since I’d seen more roadkill since leaving Austria than I had in the all of the time I’d lived in Switzerland.

It is getting late 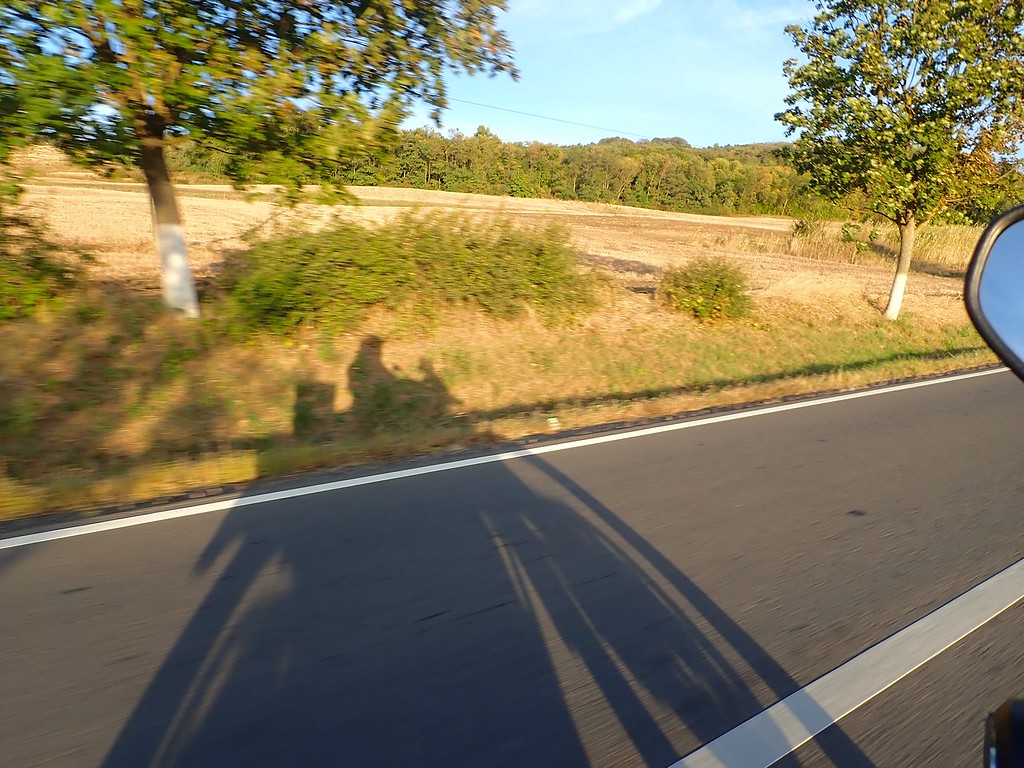 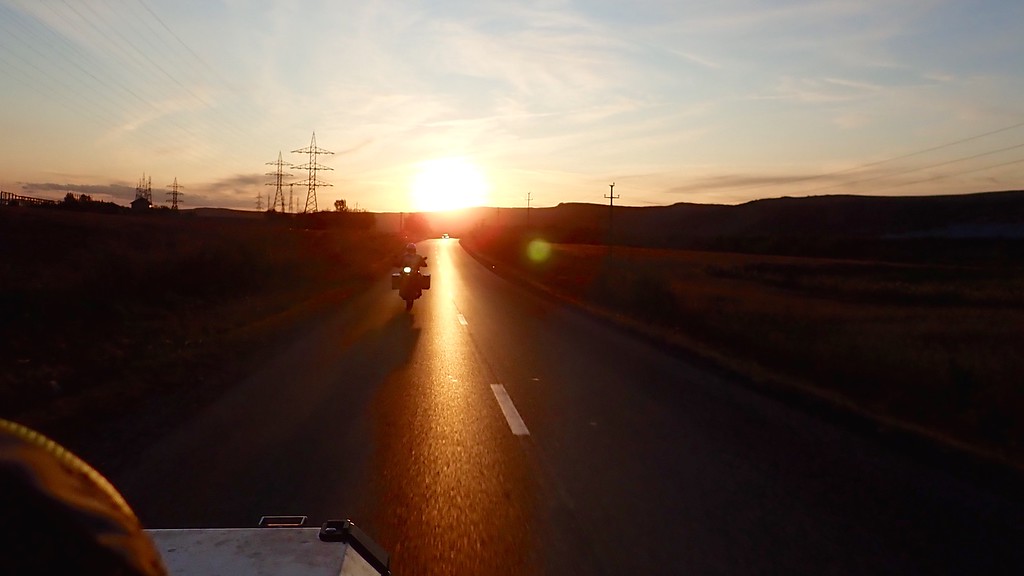 The road to our destination, Mediaș, was a steady downhill stretch that curved constantly down, down, down – just like the sun. The GPS took us through the city and to the other side, up the hill and to a side street under construction. There was no hotel there. I was getting anxious about getting off the bikes soon, and fortunately had done a bit of “street view” scouting the previous evening. I was able to look around and recognize a couple of landmarks, thereby getting us to the hotel a minute later.

It had been a long day and I was only too glad to take our stuff up to our room and get out of my gear.

Sunset from the hotel 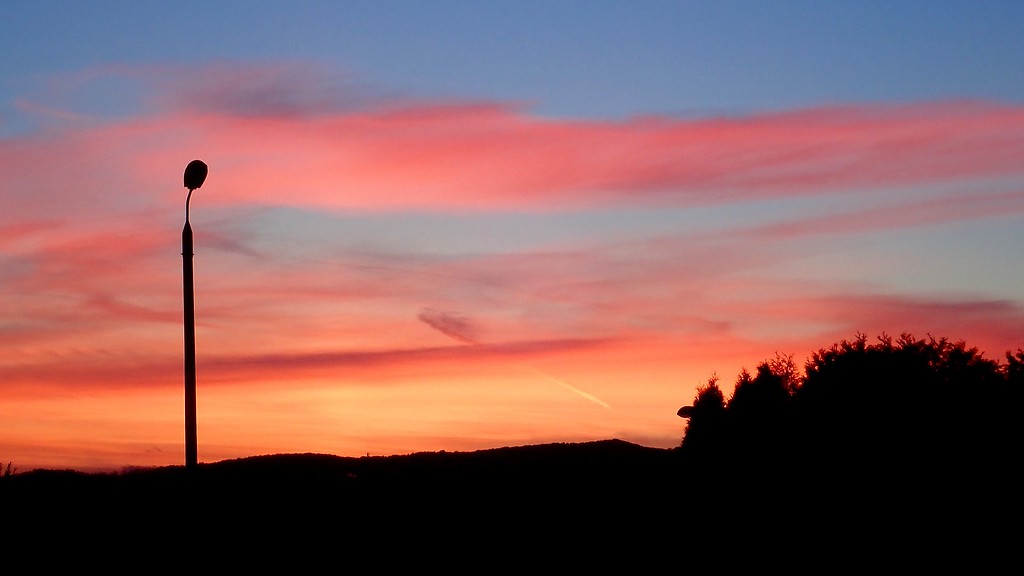