One of the selling points of our hotel (the BinderBubi) was that it was a “quiet place at the edge of the city”. Unfortunately I think that we were given the noisiest room in the place. We were directly over the kitchen, our window was next to the kitchen fan, and the wedding party downstairs celebrated heartily until late in the night. It was not a restful night and this was disappointing, as we would be here for two more nights and I had little hope that things would improve.

Our hotel in the daylight 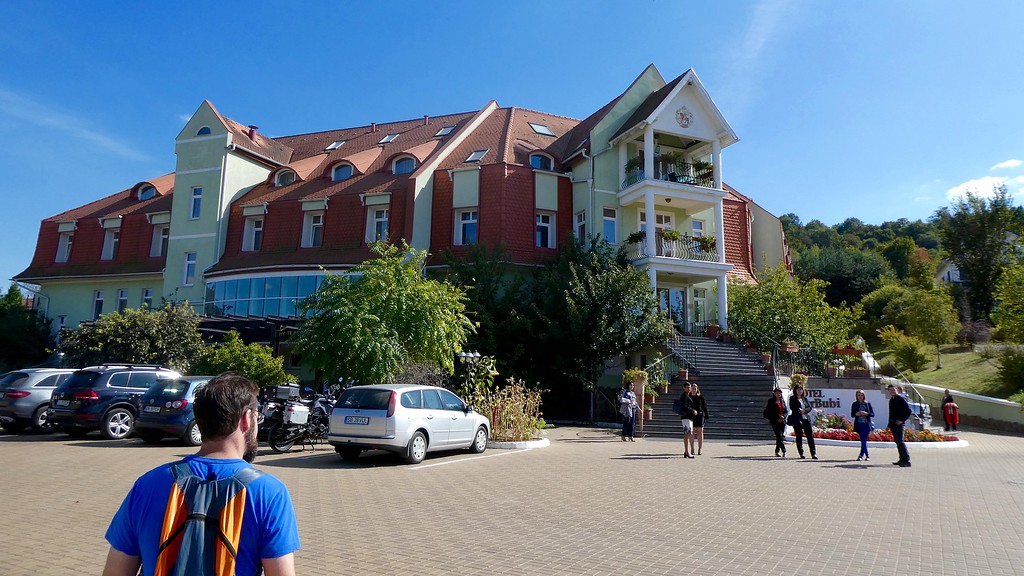 Awesome house across the street

Inside the building was the pool area

For those who forgot their swimsuit… 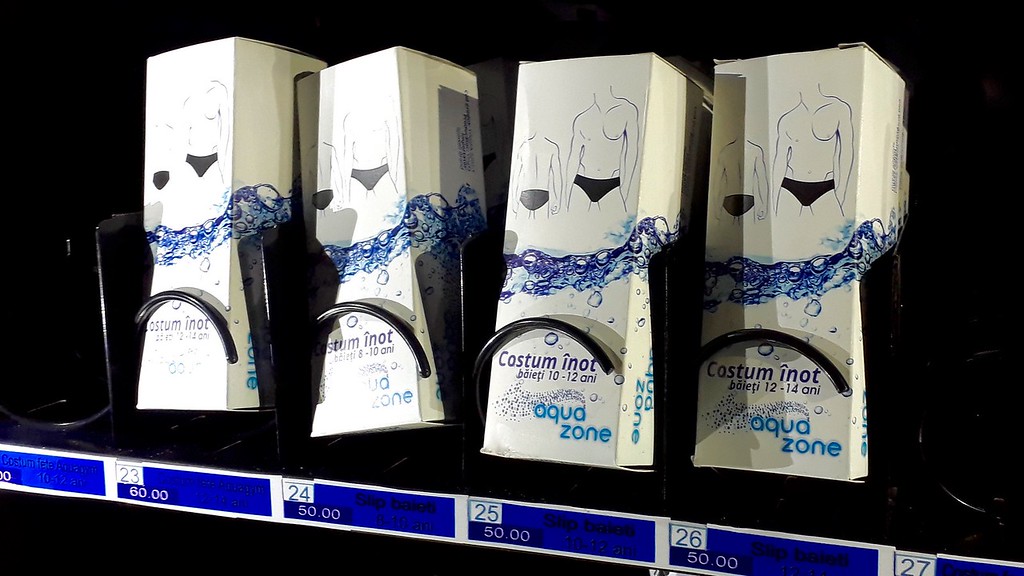 After we finally got up, dressed, and enjoyed the breakfast buffet, we headed out into the sunshine. Since the hotel sold itself as being “at the edge of the forests” we thought that we would explore those forests. The road lead further up the hill and then we decided to leave it behind and explore “off the beaten track” and through the forest. We eventually found ourselves on a mountain bike trail and we followed it back down to our hotel. It had been a nice diversion and it felt good to get some exercise.

View of Mediaș from the trail 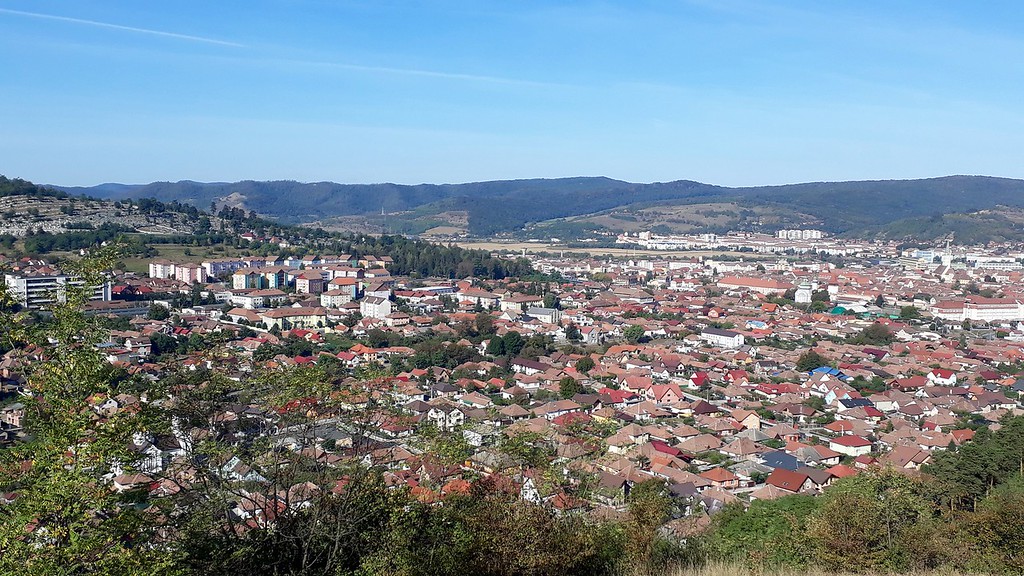 After our “nature walk” we made the walk into the center of Mediaş. I had chosen this town primarily because of its location to two places: Bran Castle and Transfăgărășan Pass. But it also looked like it might have some interesting history to explore for the afternoon. It was time to find out if I guessed correctly. 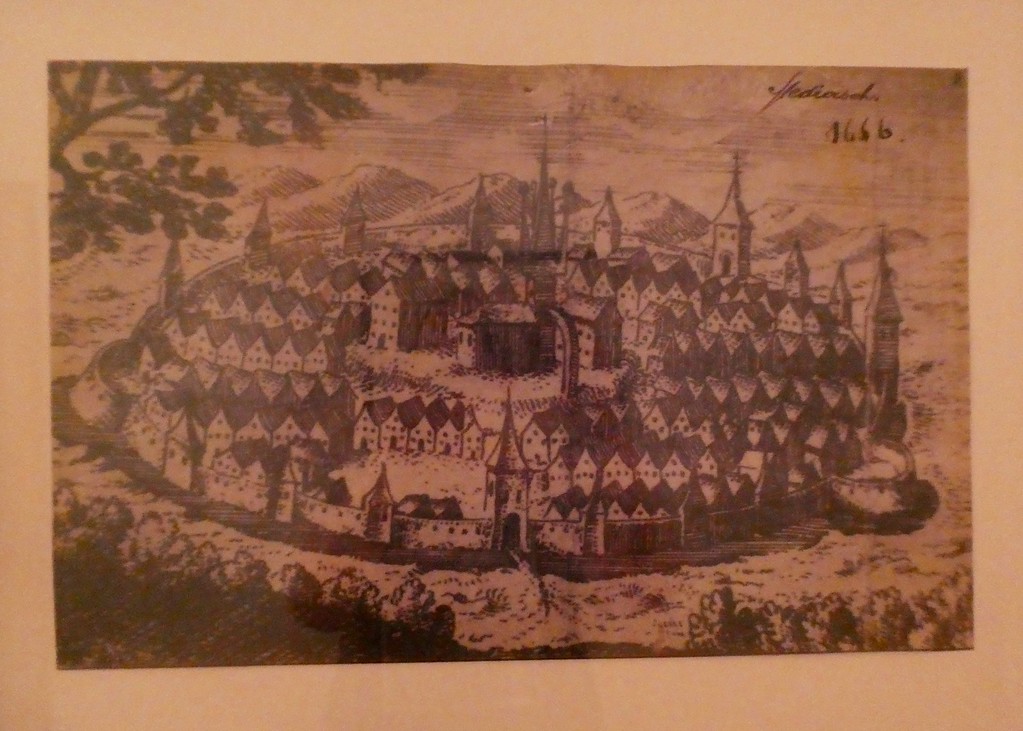 Did I mention that we were in Transylvania?

Our first impression of the town center was a good one: they were setting up for a Wine Festival. But as we got closer, we saw that we were a few hours too early and the wine merchants were still setting up. We walked around some more, exploring a few of the old city gates and checking out the architecture – and the various states of repair/disrepair it was in. 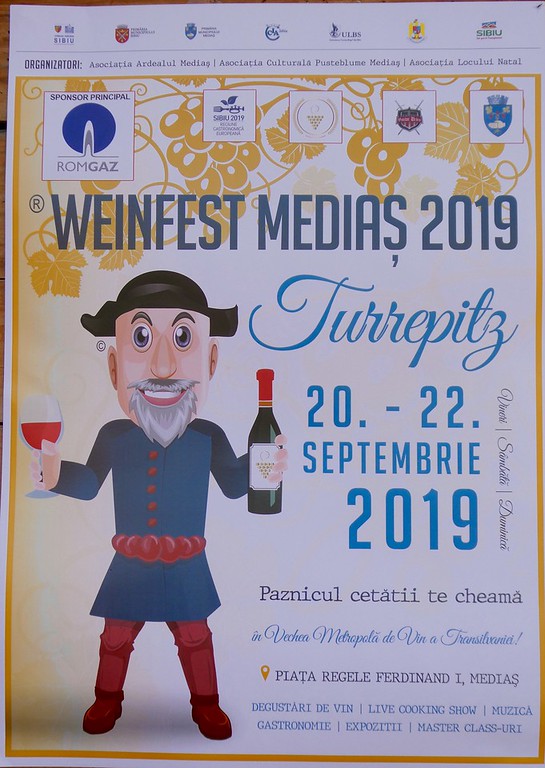 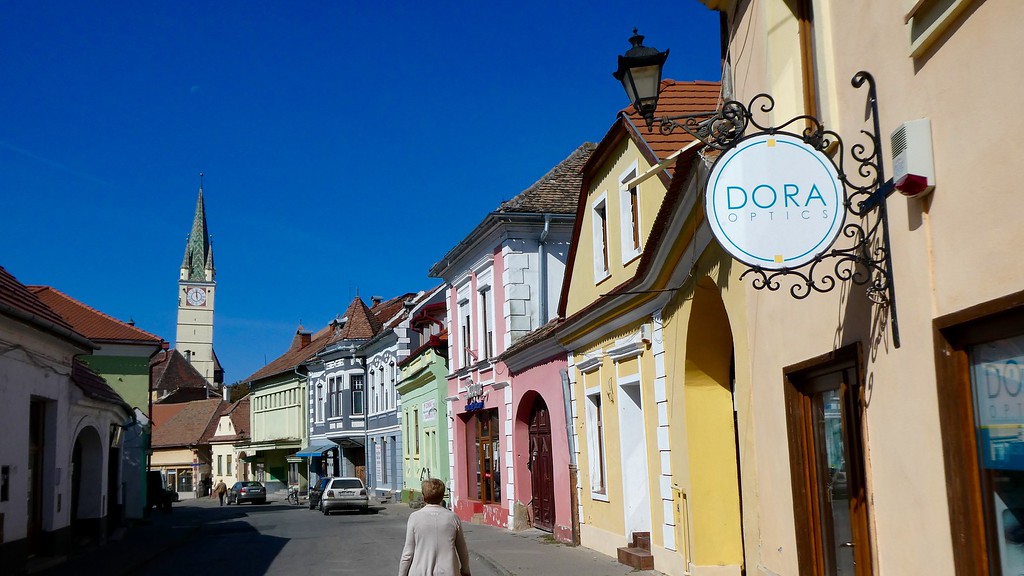 Church St Margaret in the background 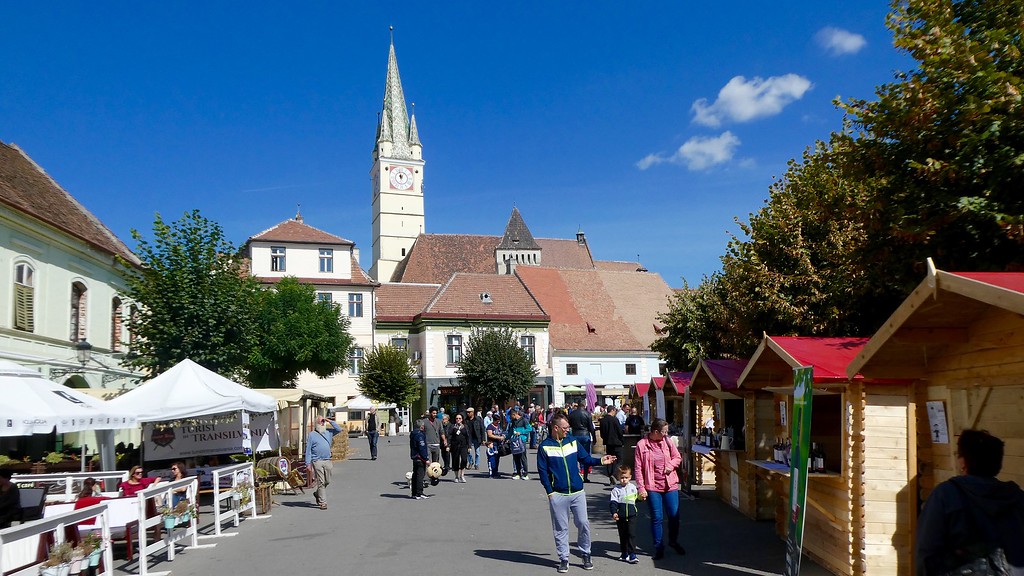 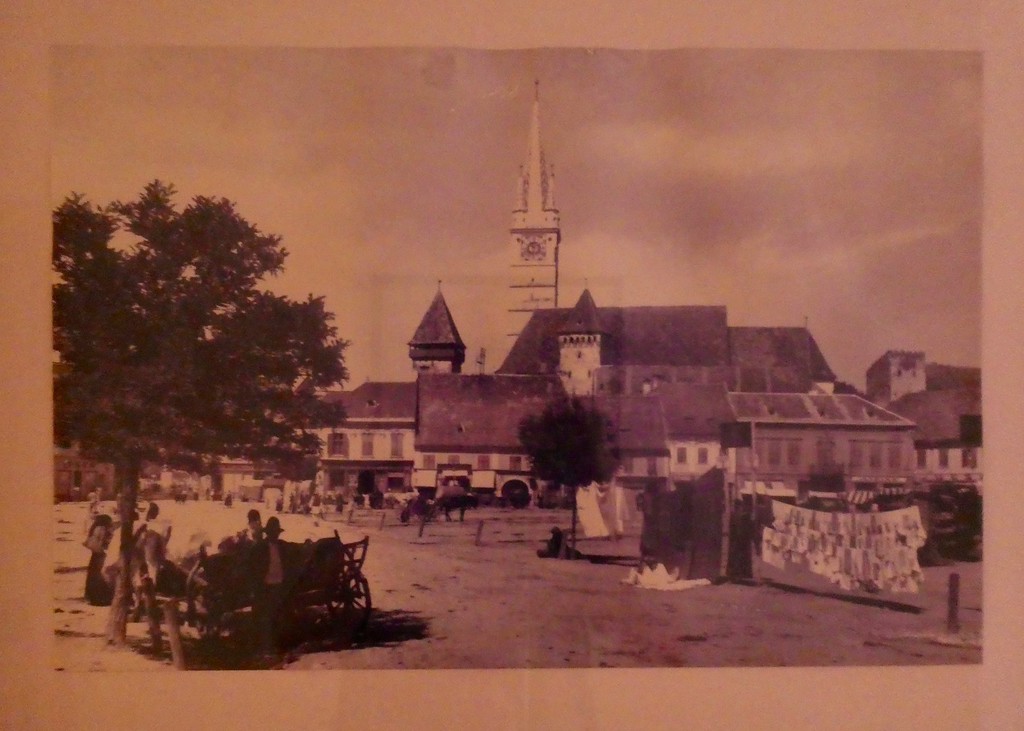 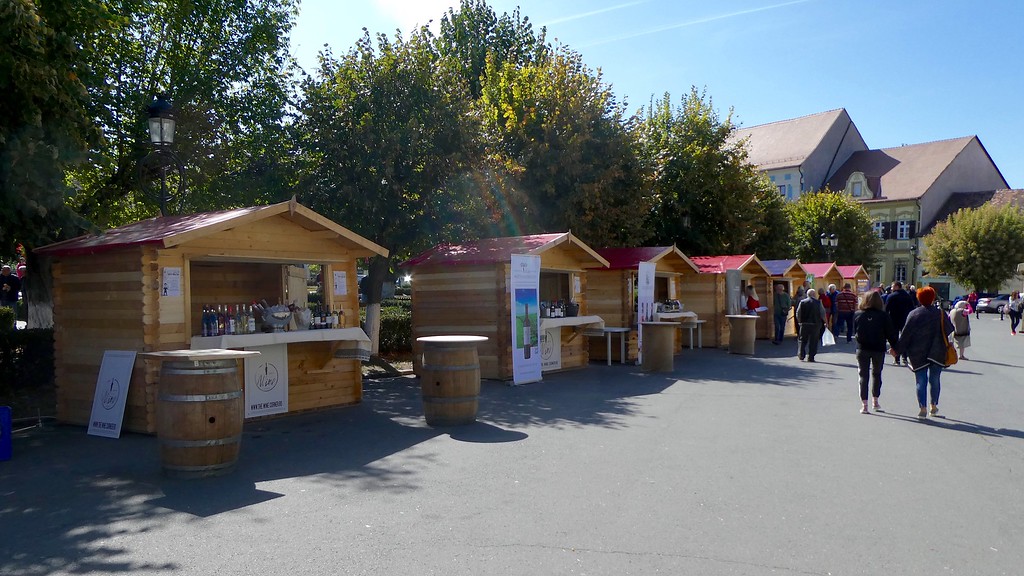 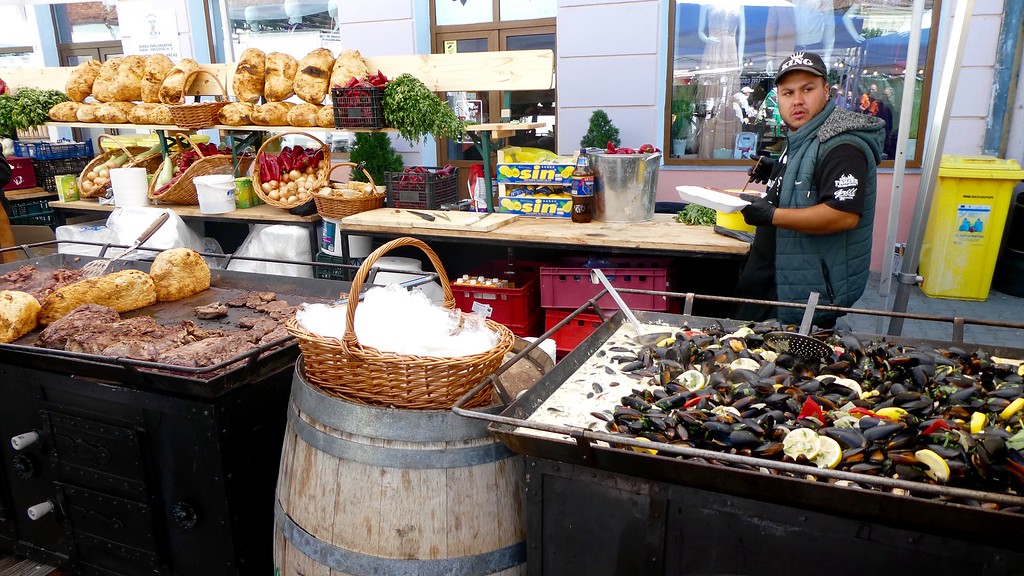 This old-school carousel piqued my curiosity, looking like something from 100 years ago 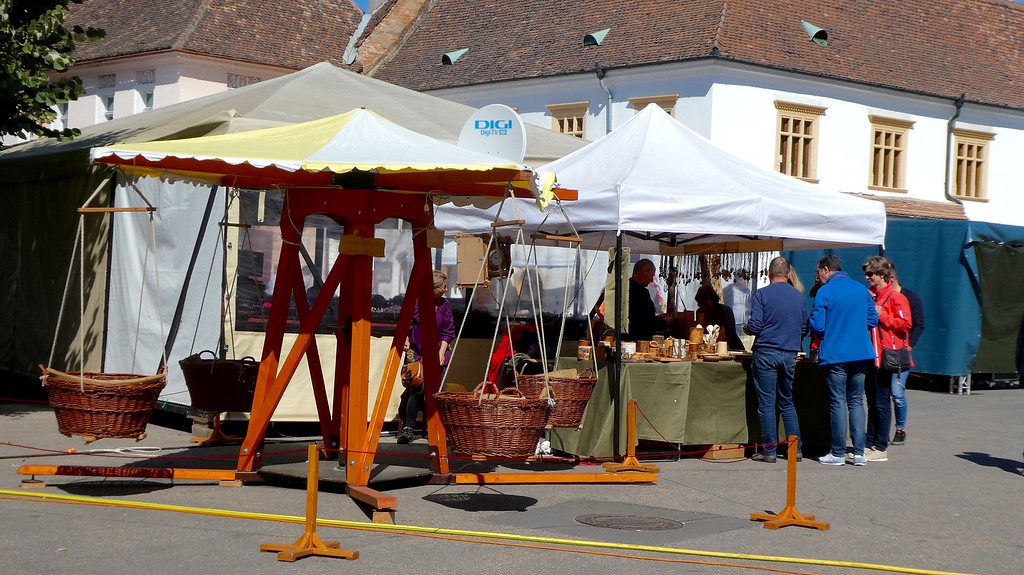 The kids didn’t seem to mind!

The one thing that was unique to the region of Transylvania was the idea of a “fortified church”. The churches were seen as a safe place to retreat to if the village was attacked, so there were walls built around the church to aid in its defense. There are hundreds of these churches in Transylvania, and Mediaş had a fine example of one. 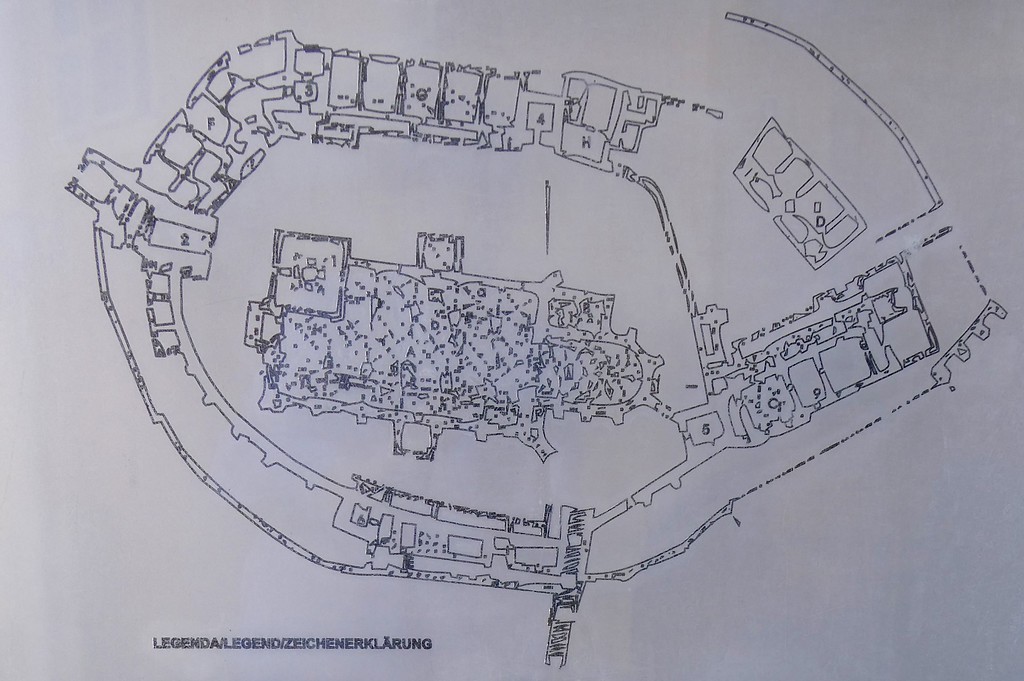 From a sign at the church location:
“The phenomenon of fortified churches in Southern Transylvania is unique within the context of European architecture due to the large number of structures (it is estimated that 300 fortresses existed) and diverse architectural solutions implemented during their construction. Protection against invasions of migratory peoples was the main reason behind the construction of such a large number of fortified churches. Initially, protection measures were primitive and included mainly deep ditches, filled or not filled with water, and earthen or wooden fences. Between the 14th and 16th centuries, the Saxon communities of Southern Transylvania built small, but strongly fortified, citadels around their churches as the church was generally the most durable and strategically positioned building in the area. In addition to the bell tower, various craftsmen constructed other towers and were tasked with the duty to protect it during times of need or danger. Guard towers, including shooting crenels and the areas for throwing burning pitch, were also constructed within the overall fortifications.”

Church on the left, wall on the right 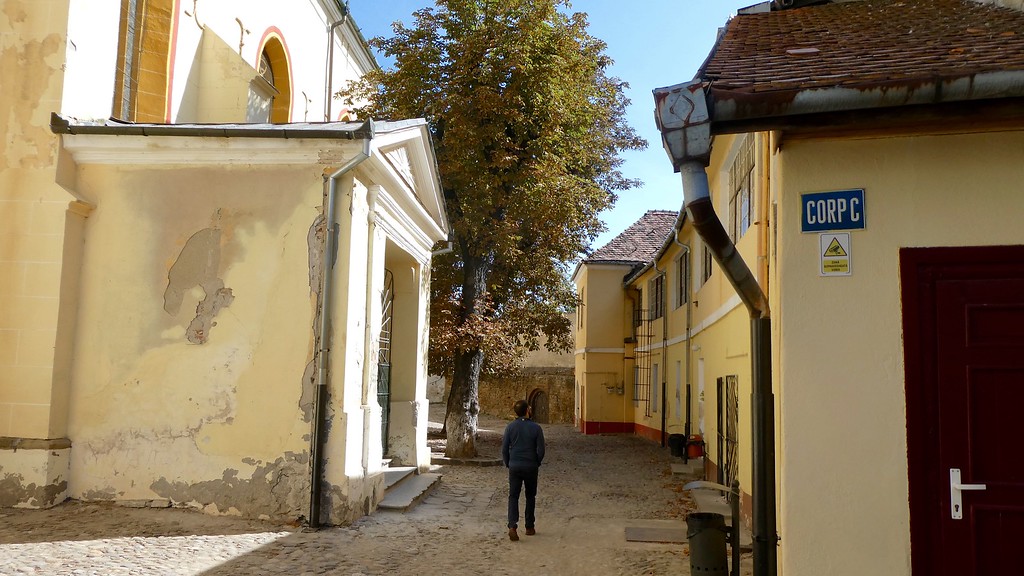 We returned to the main city park and found the town was humming with activity. More people had arrived for the weekend activities and most of them appeared to be Romanian based on the language we heard. Despite an overall feeling of poorness in the city, I could see that it was trying hard to be a good destination. It will be interesting to see what the future of Romania holds.

A well-tended and cheerful facade 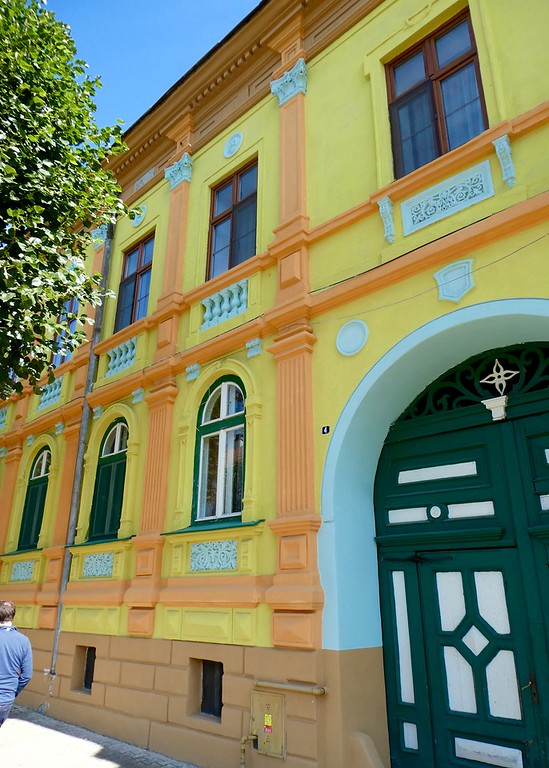 Outside of part of the city wall 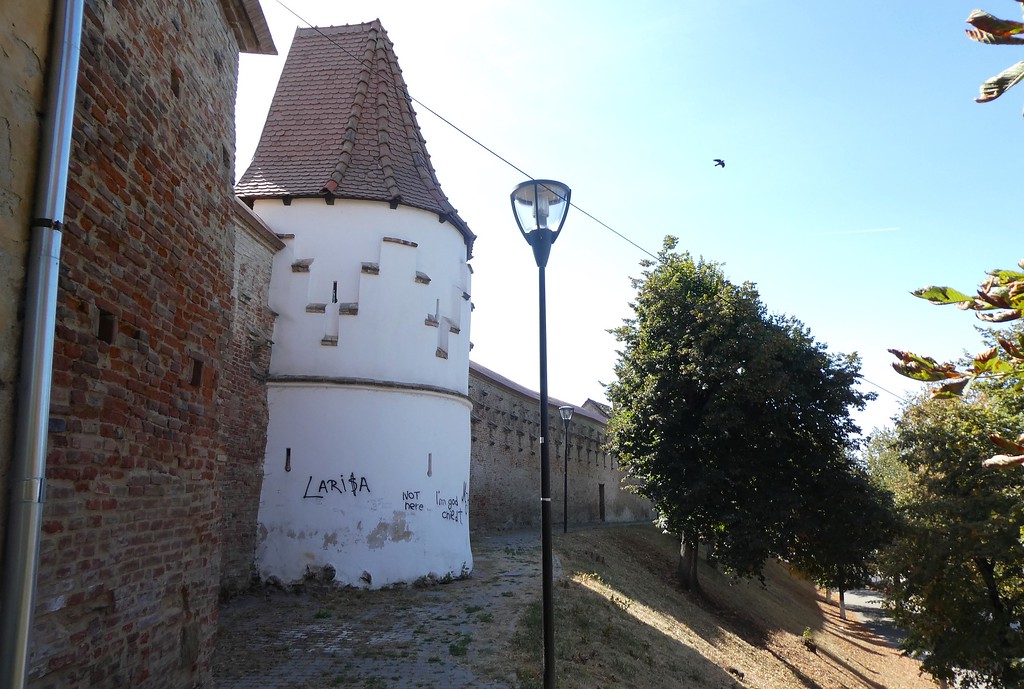 Just outside of the city walls was a fresh market and a large grocery store. We crossed over to see it, before skirting the outside of the old city and coming back in from a different angle.

Crossing over to the fresh market 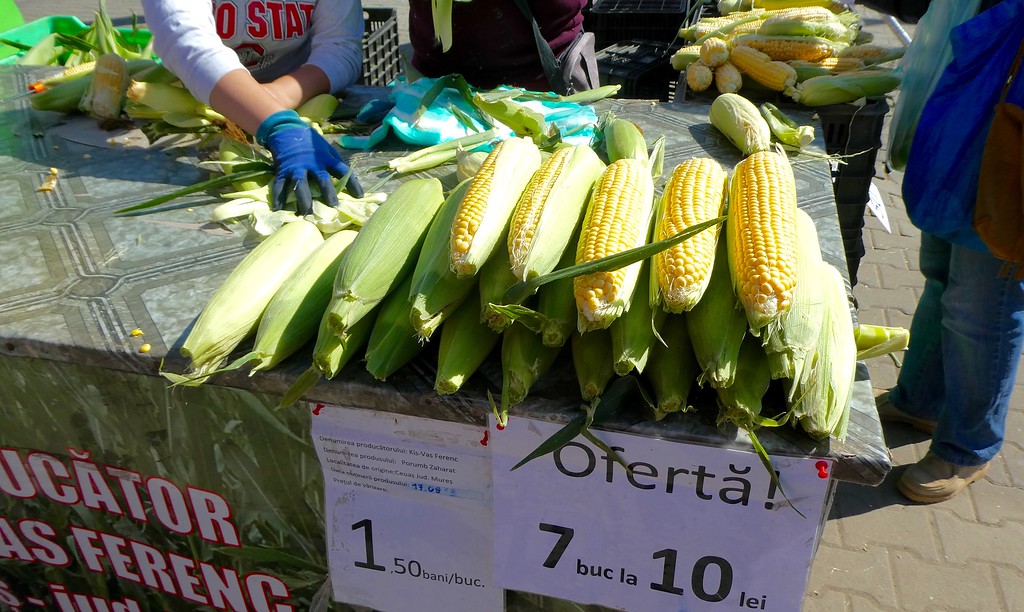 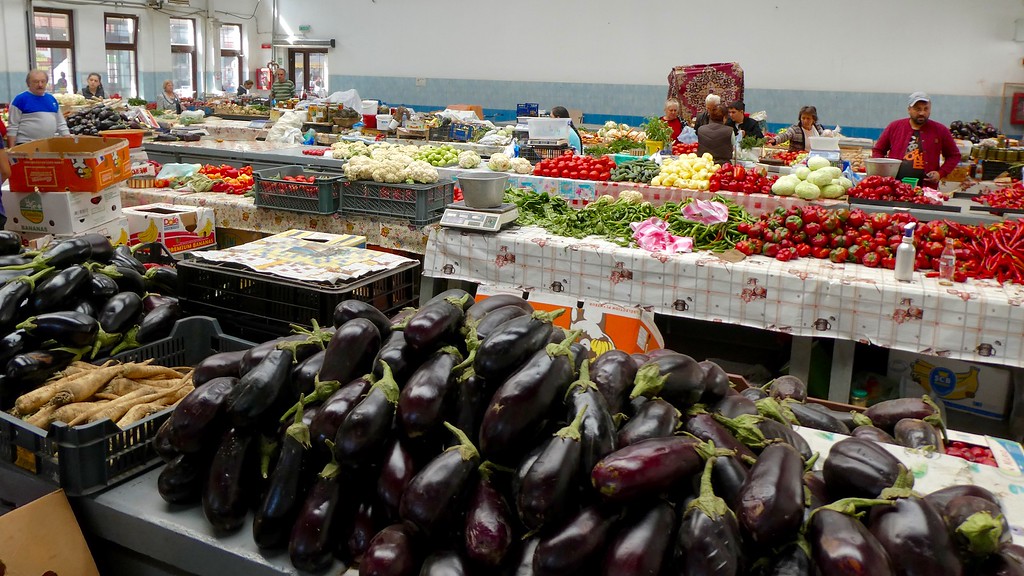 We circled back to the old town, and then eventually returned to our hotel. 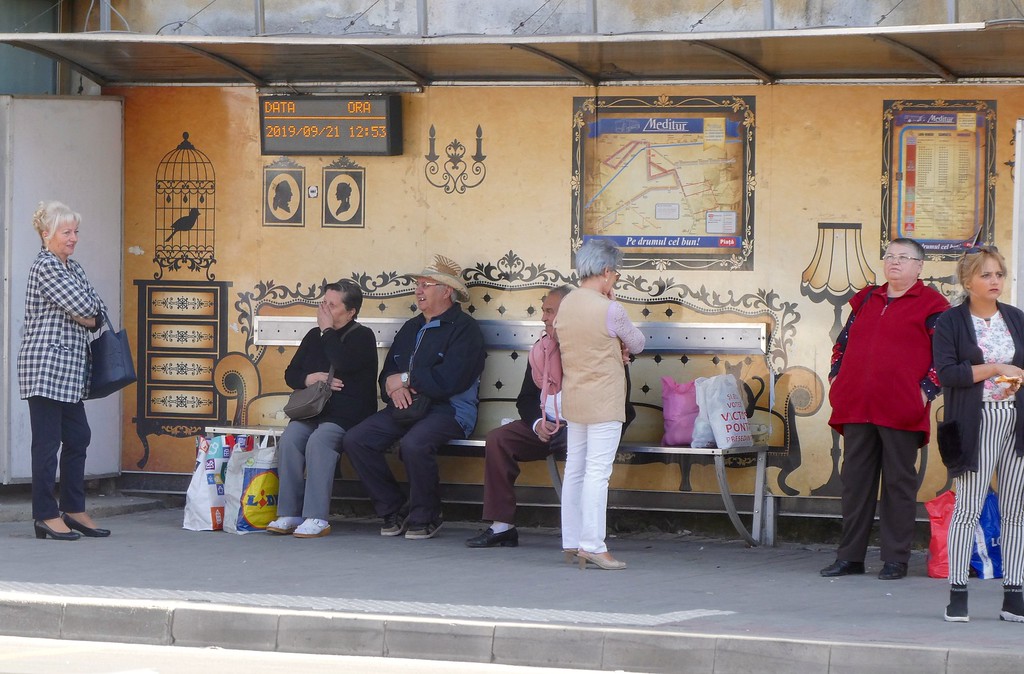 One more look back… 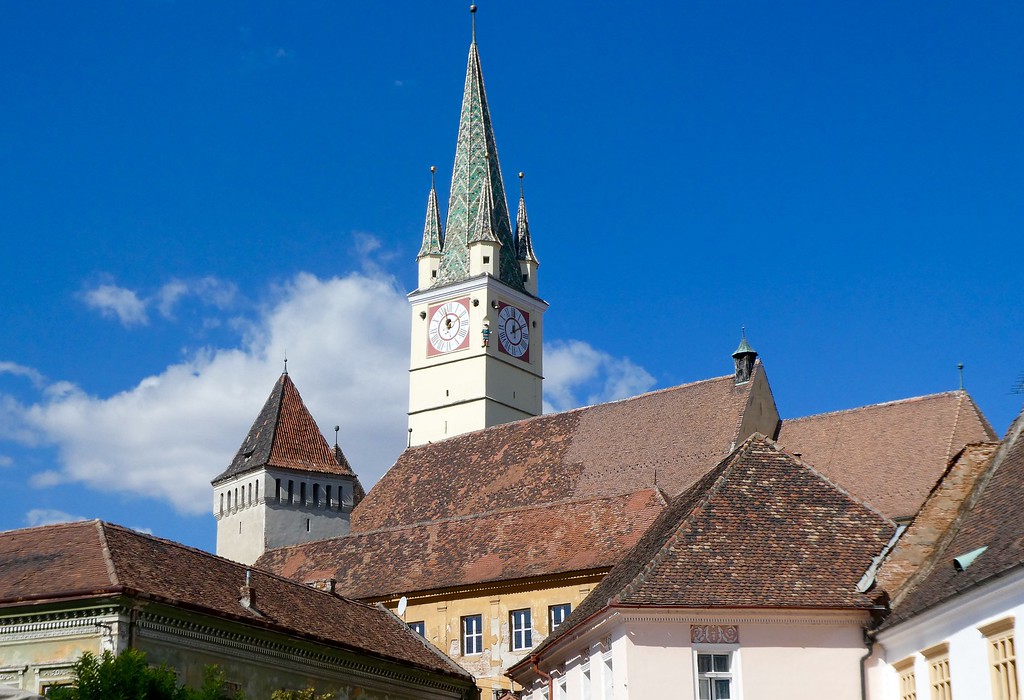 One of the city gates 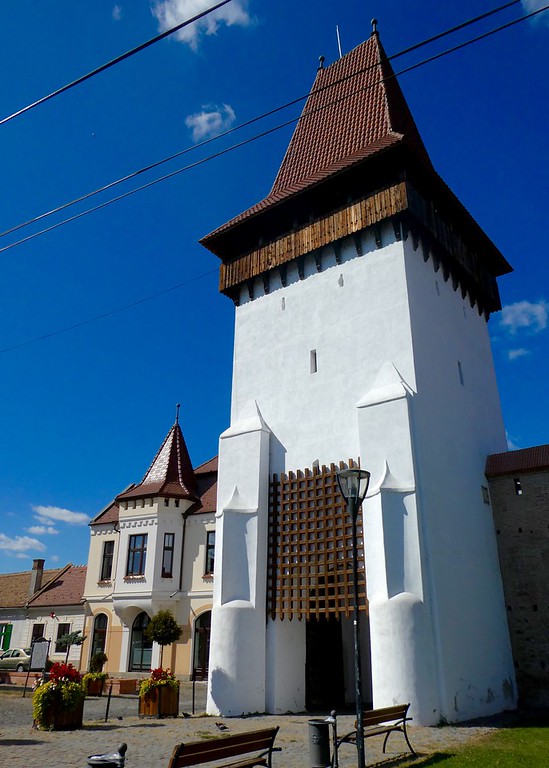 Is that a wedding taking place over there? 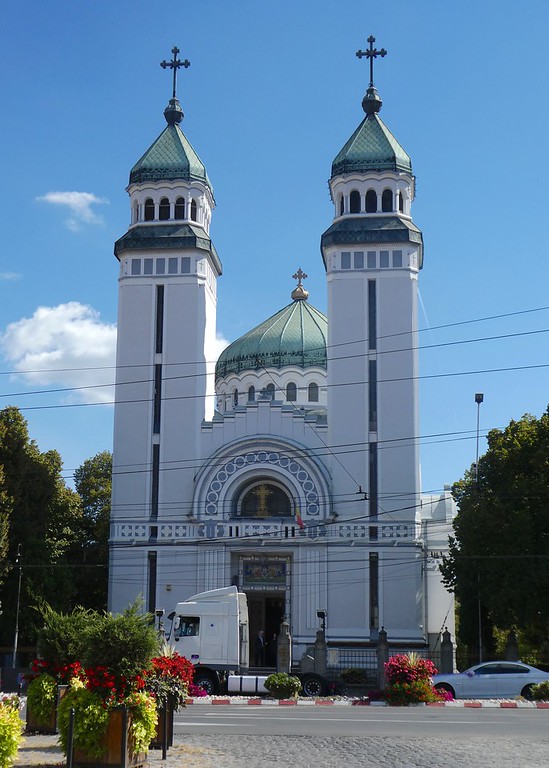 Why yes! And the bride looked very happy in the front seat

It was a quick walk back to our hotel, taking alternative roads to spice things up. We took note of some of the unusual architectural touches here, such as the “crowns” on the gutter corners: 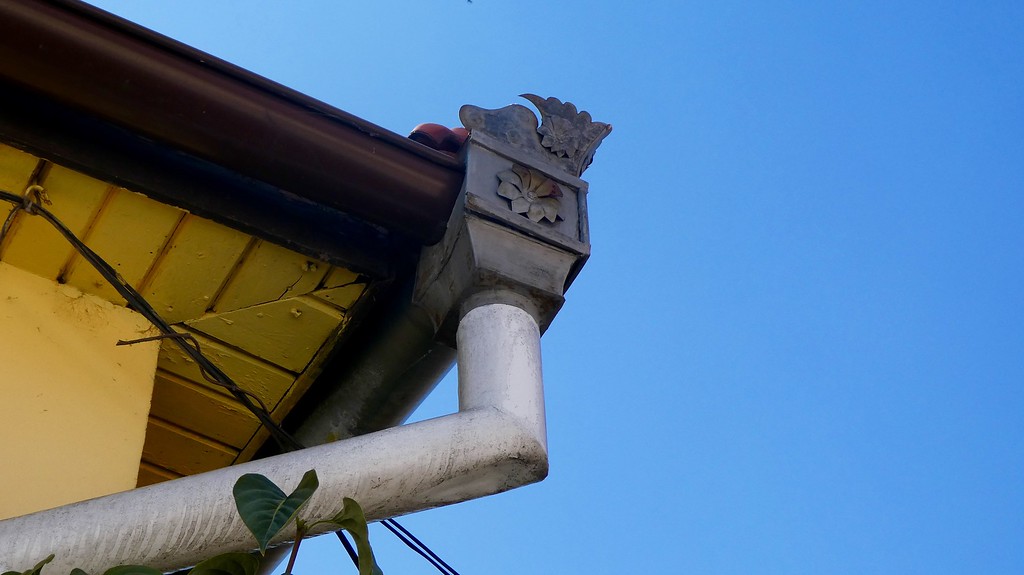 And a street being freshly paved 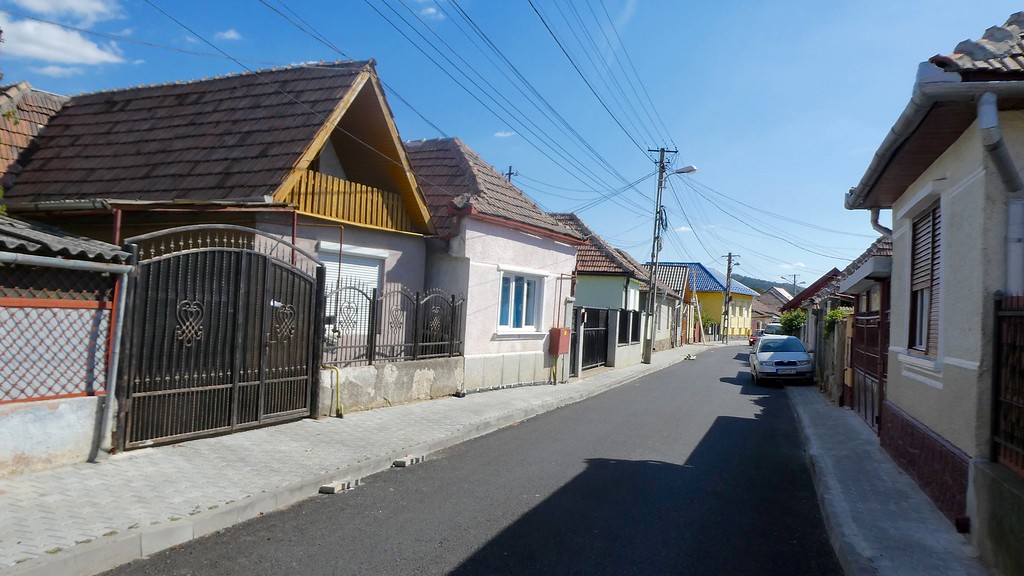 Back at the hotel, we took a dip in the pool and checked out the sauna. There was no sauna meister to pamper us, but that was ok: I wasn’t ready to spend fifteen minutes in an unnaturally hot room. We ate at the restaurant again, and hoped without much expectation that we’d have a quiet night.

There was another wedding, so no, it was not quiet at all.