Being so deep in the south east corner of Germany meant that we were also very close to Eagle’s Nest, Hitler’s iconic mountain retreat. Last night I did a lot of last-minute research into the best way to see Eagle’s Nest. What I realized was that I really didn’t want to visit the place at all. Apparently there were limited original items left from Hitler’s stay there and, while the views were supposed to be incredible, it wasn’t like we haven’t had our share of “alpine vistas” in our time. That, plus the hours that would be dedicated to just getting up there, we decided to do a “drive by” visit.

I’m sure that we saw it – I’m just not sure which mountaintop it was. 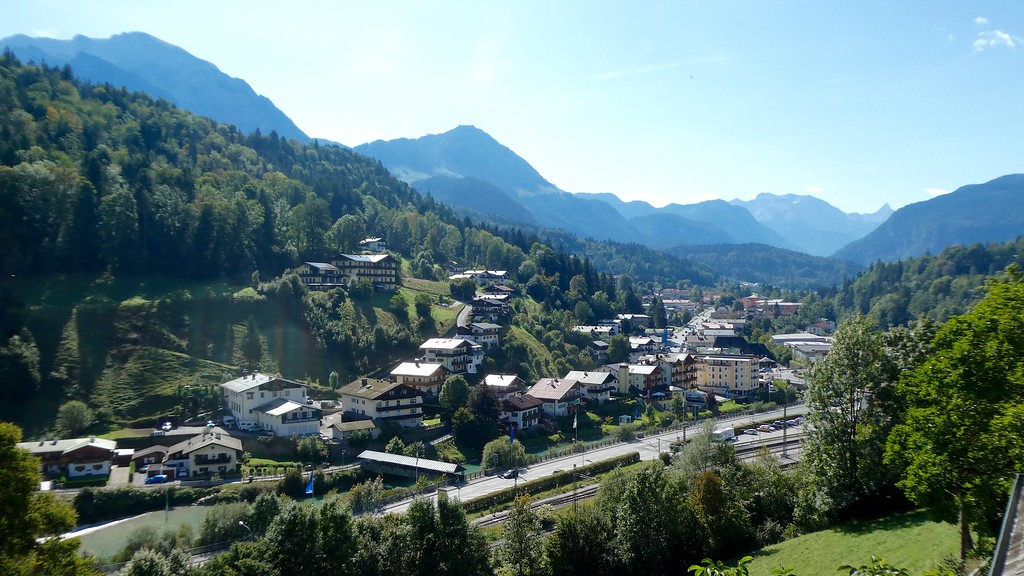 It had gotten warm by now – 28°C on the bike’s thermostat – and it was good to keep riding. Our next destination was Admont, a small town in Austria. The RV crowd was out in force as we made our way through some beautiful countryside. The crossing into Austria was uneventful and soon we were following long valleys lined with cloud-topped mountains. I was surprised by the number of small towns that we passed through. For whatever reason, I had assumed that this leg of our trip would be mostly natural landscapes with infrequent signs of humanity. I should have known better, since Austria is a well-developed country with a long history.

“Roller skiing” in the mountains

I don’t think this is a Maypole, but not sure what else to call it? 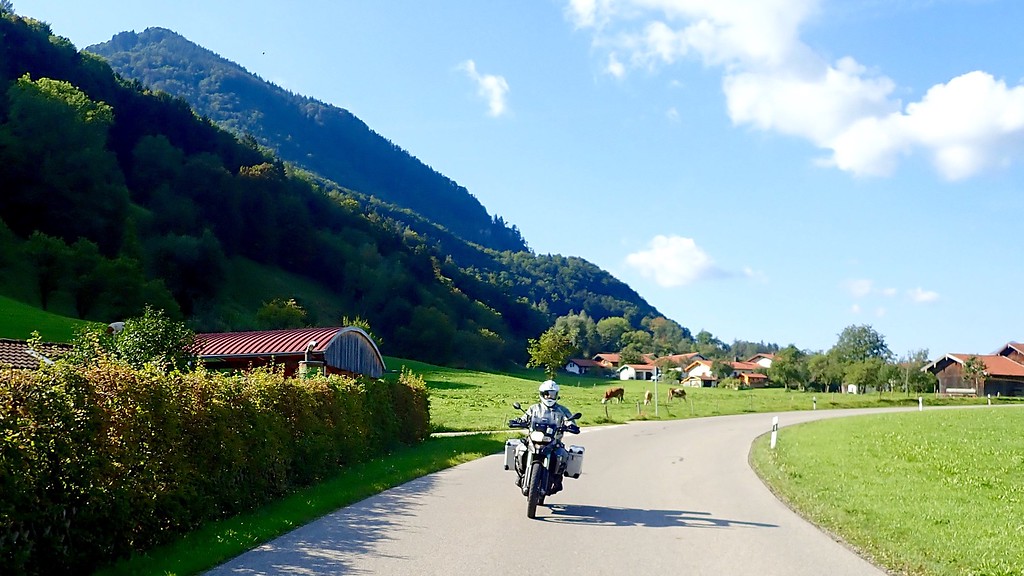 At one point we pulled over to adjust our gear (it was getting warmer!) and we were able to fully enjoy some of the many tractors that had been lumbering down the road for the last hour. I bet that there was going to be some amazing tractor show nearby! Some were truly classics, and some of them were bringing their own camper. It really was incredible to see so many of them on the road!

(Shooting into the sun) 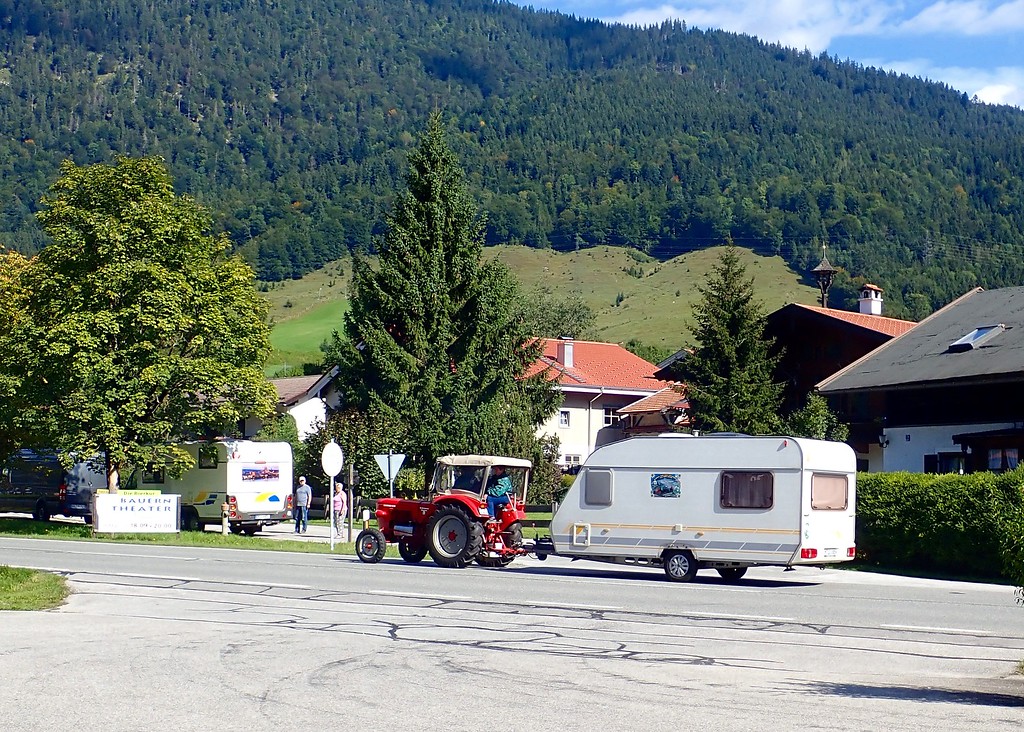 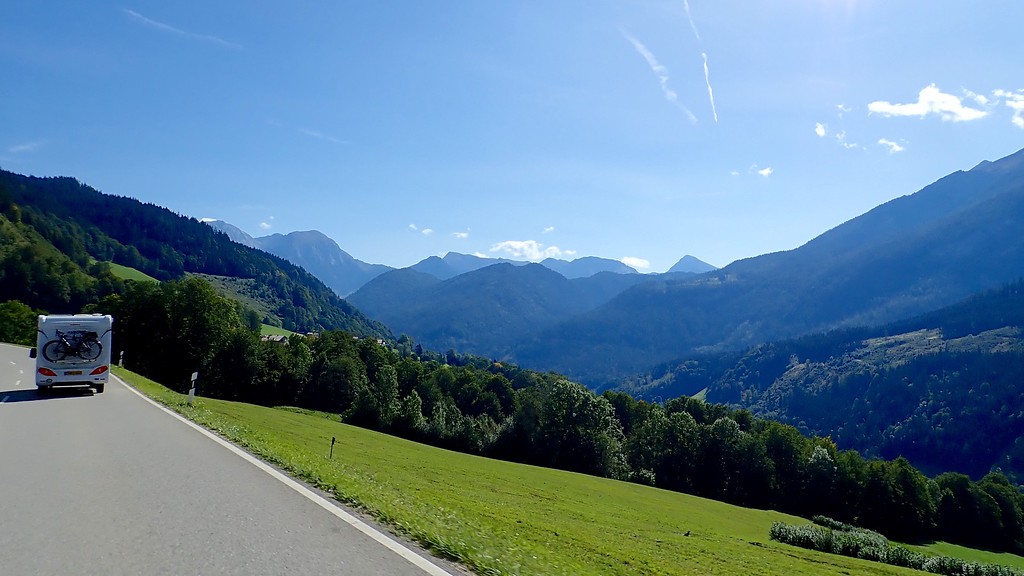 Riding through the mountains – literally

One of the things I love about traveling by motorcycle is that we’re more likely to stay off the main roads and instead find little gems like this one. I love the idea that we’re seeing views that 90% of the people traveling through will never see. 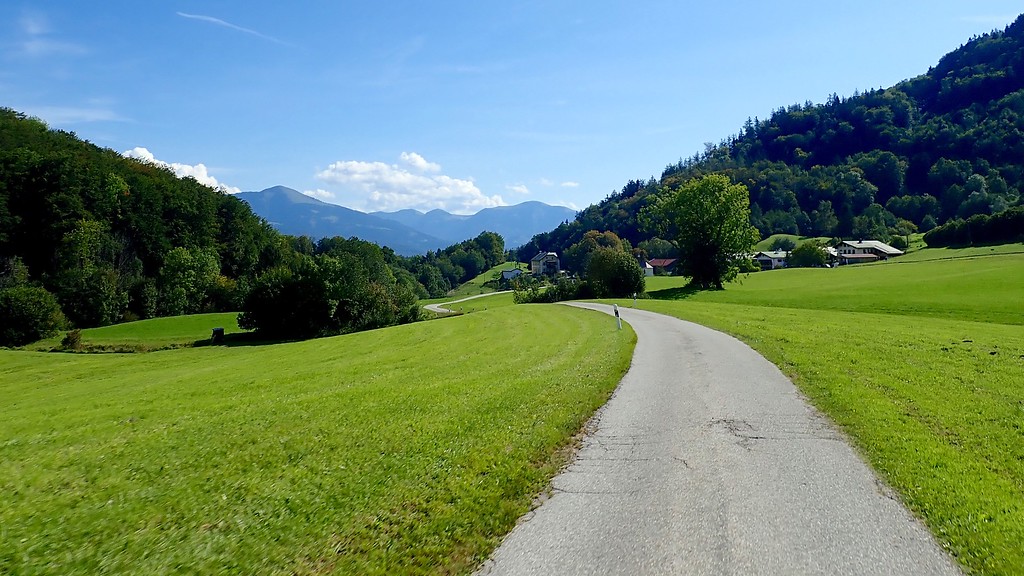 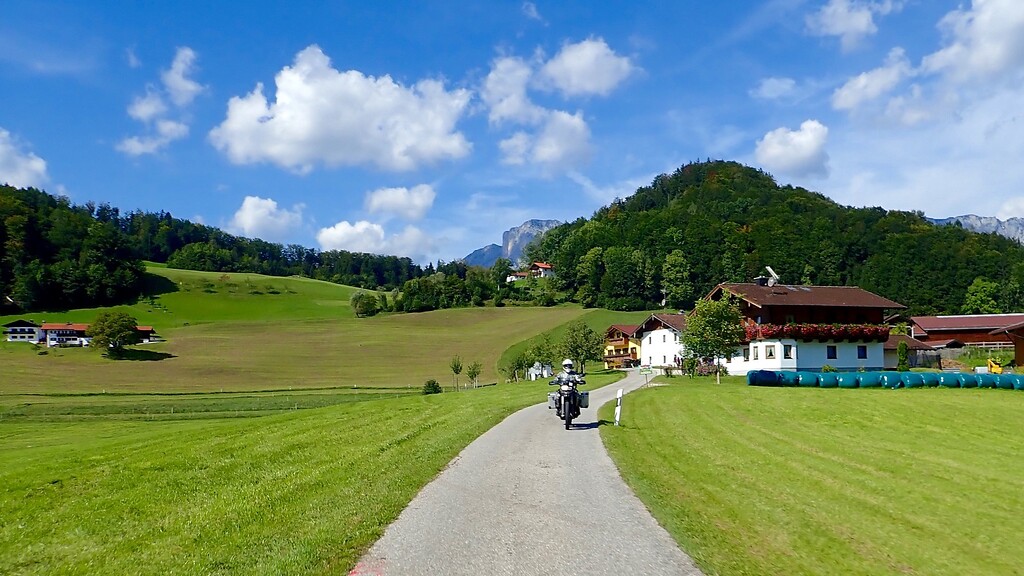 Passing through another small town 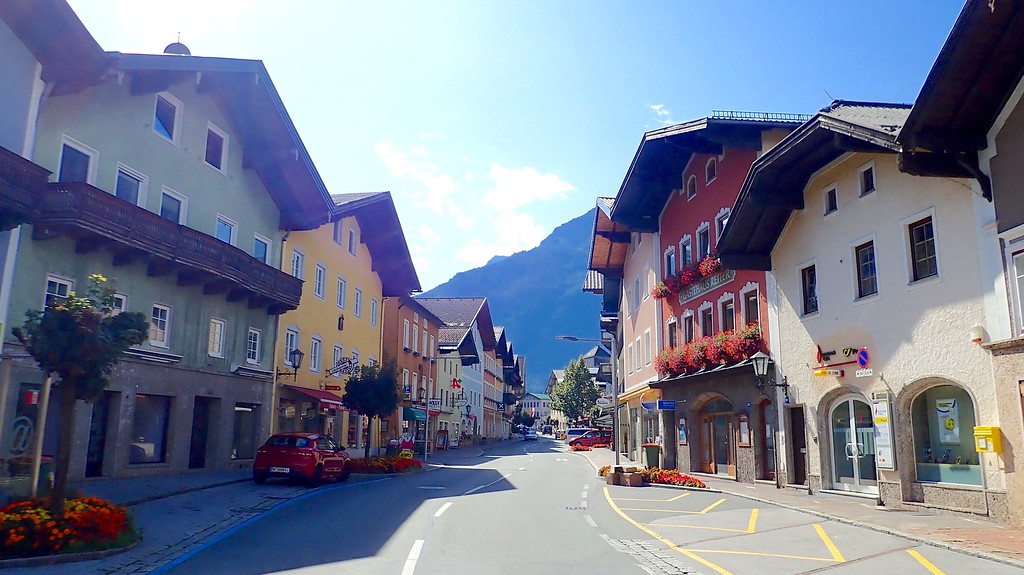 Riding down another long Austrian valley 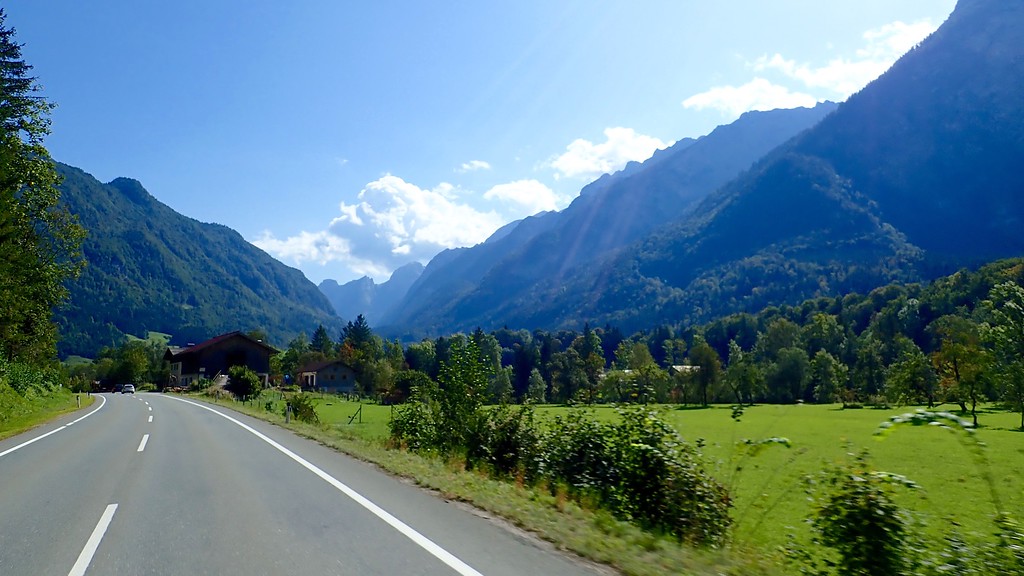 And another narrow lane

In scouting out our route I saw that we’d be very close to Hallstatt, a charming lakeside village that Dan and I had visited in 2014. It was winter then, and I thought it would be fun to see it in the autumn splendor. What I wasn’t counting on is that the main road through Hallstatt is actually a tunnel, so we didn’t see much of the town itself. 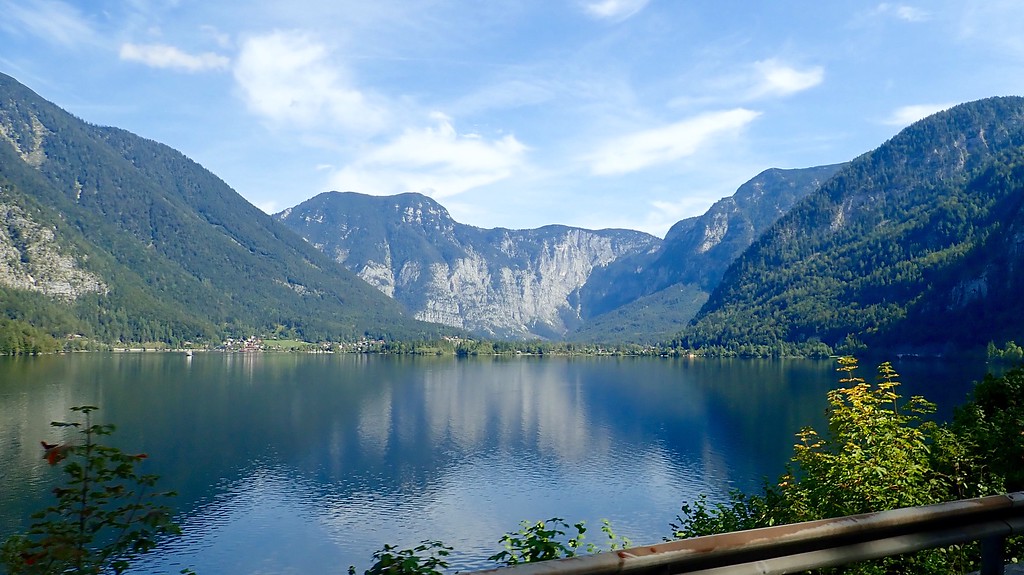 Hallstatt on the other side of the lake

A surprisingly steep pass (18% grade!) was on the other side of the lake and then the landscape opened up considerably.

We reached the town of Admont at a reasonable time and found Landgasthof Buchner. We learned later that many businesses in Austria are not open on Mondays. We hadn’t realized that, and were surprised when the hotel doors were locked and no one was about. At first, I thought it was because we had arrived late in the afternoon and they weren’t prepared for the evening’s guests. But a quick call to the phone number on the door indicated that this was a standard affair, and the host provided the information needed to access our room key from the key box.

The building was silent and empty while we brought our things up to our room. It was a nice space and we did a quick load of laundry in the sink so that it would dry while we explored the town. 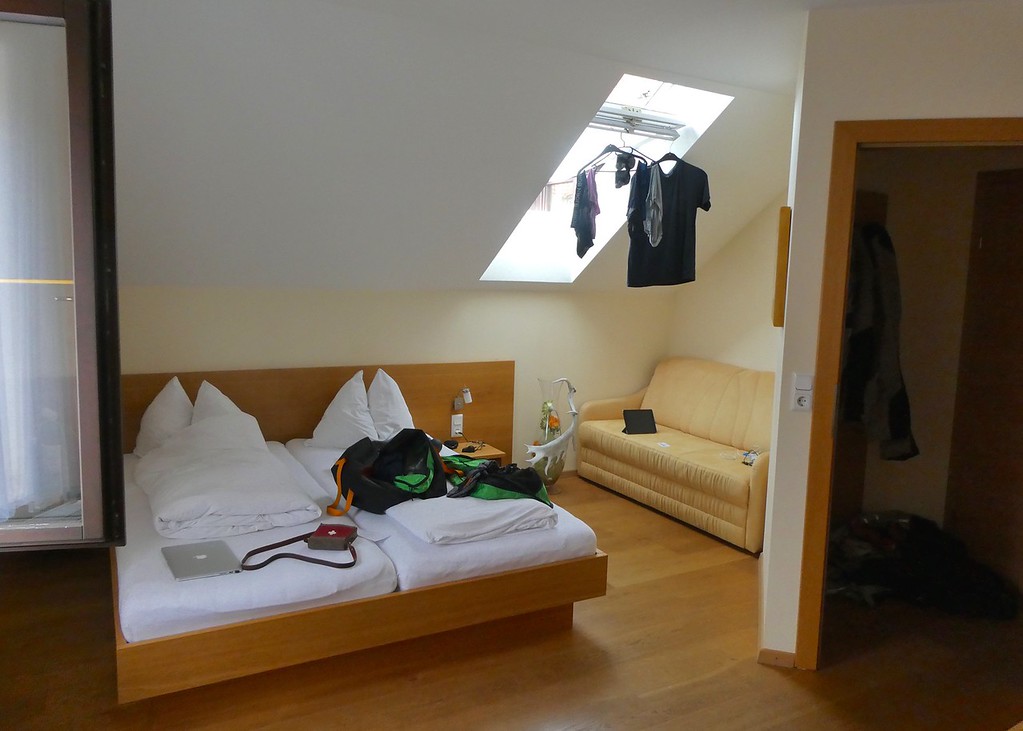 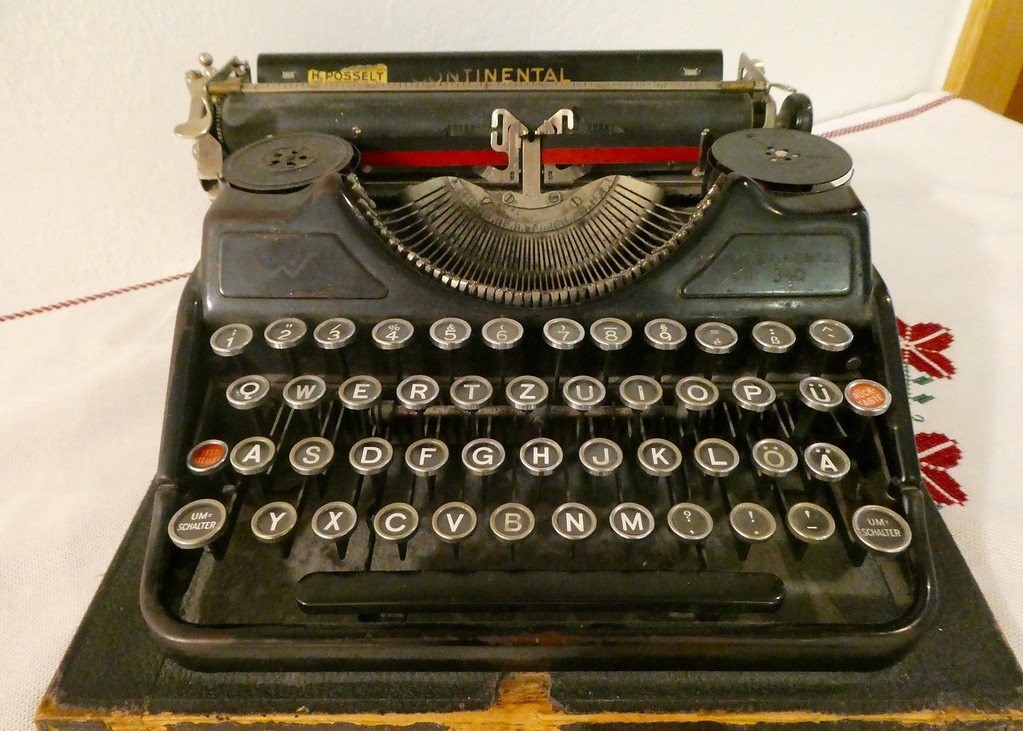 It was still early and the hotel empty so we went outside to explore a bit of the neighborhood. Across the street was a large park and beyond that was the huge complex of the Admont Abbey. This would deserve a more thorough investigation – when it was open.

Gardens of the Abbey 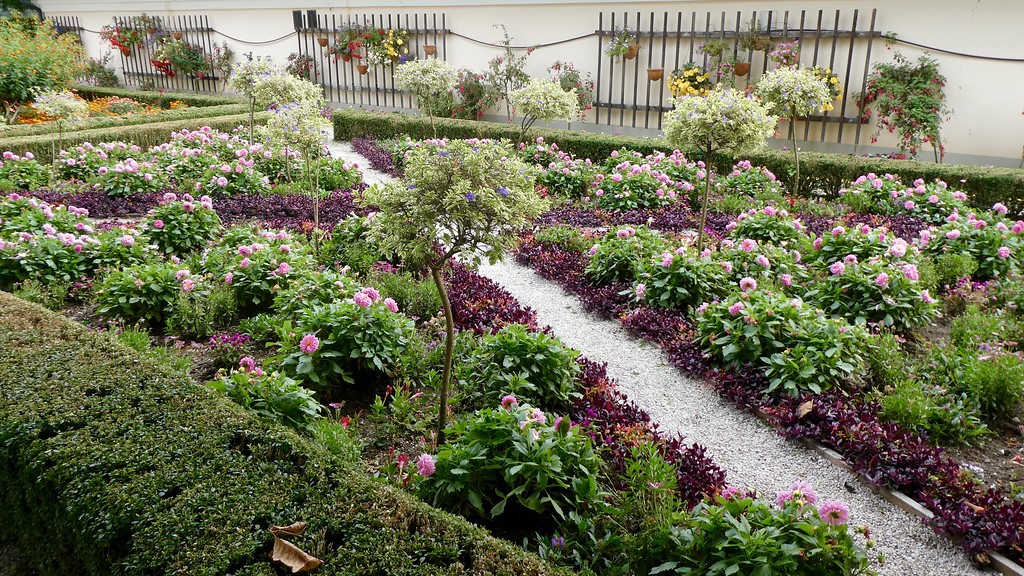 Dan and I returned to the hotel in anticipation of having a nice dinner in their restaurant. Much to my surprise, the entire ground floor was empty. There was no hostess in the restaurant, and not a single sous chef was in the kitchen. There weren’t even any lights on. I took a seat in the restaurant because as far as we could tell, the Wifi on our floor was turned off between 9:00 – 17:00 every day. I was doing a little bit of planning for tomorrow’s activities when another visitor of the hotel greeted me. He had just arrived in Admont and I mentioned that the most of the businesses were closed. I was pleasantly surprised when he returned a while later with the news that there was an open restaurant at the Abbey. Excellent news, and thank you, kind stranger. We shall not starve tonight!