We were ready to leave Ljubljana. I had enjoyed my time here, but it was time to continue our progress towards home. We dragged our bags down to the bikes, geared up, and made our way to the underground lot’s exit. The hotel had given us a voucher for our parking for a reduced rate, so naturally we left at the same time. No sense in paying for two bikes when we only took up one space!

Leaving the city was super easy and it wasn’t long before we were in the countryside. There was no rain (yay!) but there were low clouds. 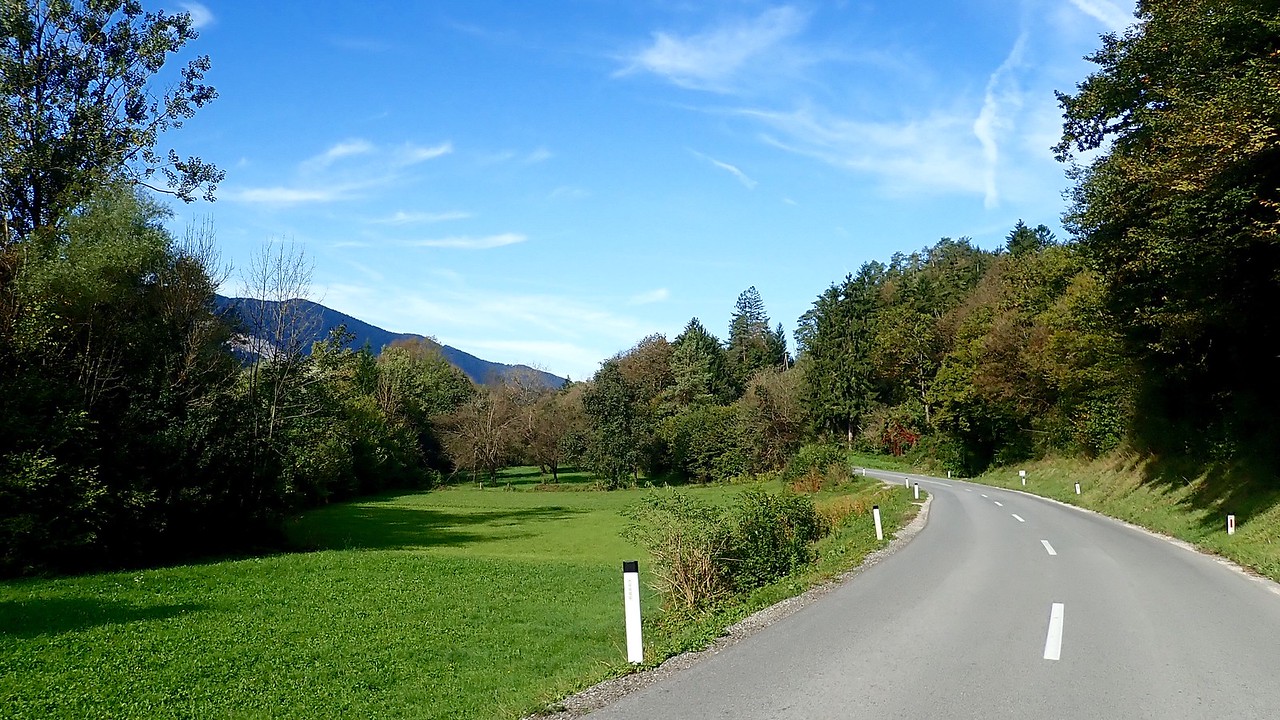 We had entered some rolling hills and forests – it was turning into a fantastic riding day. I noticed around one bend a castle on a distant hill – very cool! Then we passed a massive golf ball and some dinosaur skulls. What was going on?

Castle in the distance

And then suddenly – Lake Bled!

Dan and I planned on coming here on this trip, if only to ride through, but I was still surprised that it was so close. We had already spent of bit of time in the town itself on a previous trip, but I wanted to see it again, and the weather was so much better this time! I naively thought that a quick “ride around the lake” would be in order, and then we’d be on our way. Except that it is not possible to ride around the lake. So we went as far as we could, turned around, and then continued on our merry way.

The restaurant that made me cry, the steak was so good

Leaving Lake Bled behind, we also left the traffic behind, and gained elevation quickly. I could not believe what beautiful weather we had today. We had entered the sun-filled isolation of the Radovna Valley.

A stone ruin at the side of the road caught our attention and we took a break to investigate. I was also trying break up our day so that it was more relaxing and comfortable for us; I tend to ride-ride-ride! and am then surprised when Dan’s back aches. I’m such a bad wife!

We pulled off and parked the bikes, taking off some gear for a fully-immersive relaxtion stop. Based on what I read on the signage posted there, the ruin marked the site of the Radovna Massacre. In addition to the what I read there, I also found this on the Internet:

BURNED-DOWN RADOVNA
The inhabitants of Radovna supported the partisan movement, and by the year 1943 the whole village was active in the fight against their German oppressors. Radovna was the crossing point of numerous trails from Pokljuka to Mežakla, and the starting point of a courier route to Koroška (Carinthia). The activists of the Liberation Front held meetings in the Radovna valley and it was from Radovna that the supplies were delivered to the partisan technicians in the rocks below. On September 20, 1944 the Germans and their collaborationists retaliated by burning the village down. The ruins of the Smolej farmhouse and a monument, uncovered in 1961, still stand here in memory of the tragedy.

Keep your seal on a leash

There were a surprising number of bicycle tourists along this route, and I could see the attraction to it: it was a quiet, level road, surrounded by natural beauty and with very little motorized traffic. Actually, we had seen quite a few touring cycles on this trip. Then again, you see a lot more of everything when you leave your couch. It was good to be on the road.

With the story of the burned down village of Radonva fresh in our minds, I suggested that when we leave, that we take the gravel road that I had parked in front of. The GPS indicated that it would join up with the paved road just a little ways down the valley, and I was curious to see any further ruins that might remain.

There were no more ruins to be seen, but the gravel road was an absolute delight!

The gravel ended abruptly in a farmyard. I was a little confused at first, and hoped that we weren’t intruding on the residents. We soon found an exit back to the main road and were on our way!

The modern village of Radonva

The town of Mojstrana 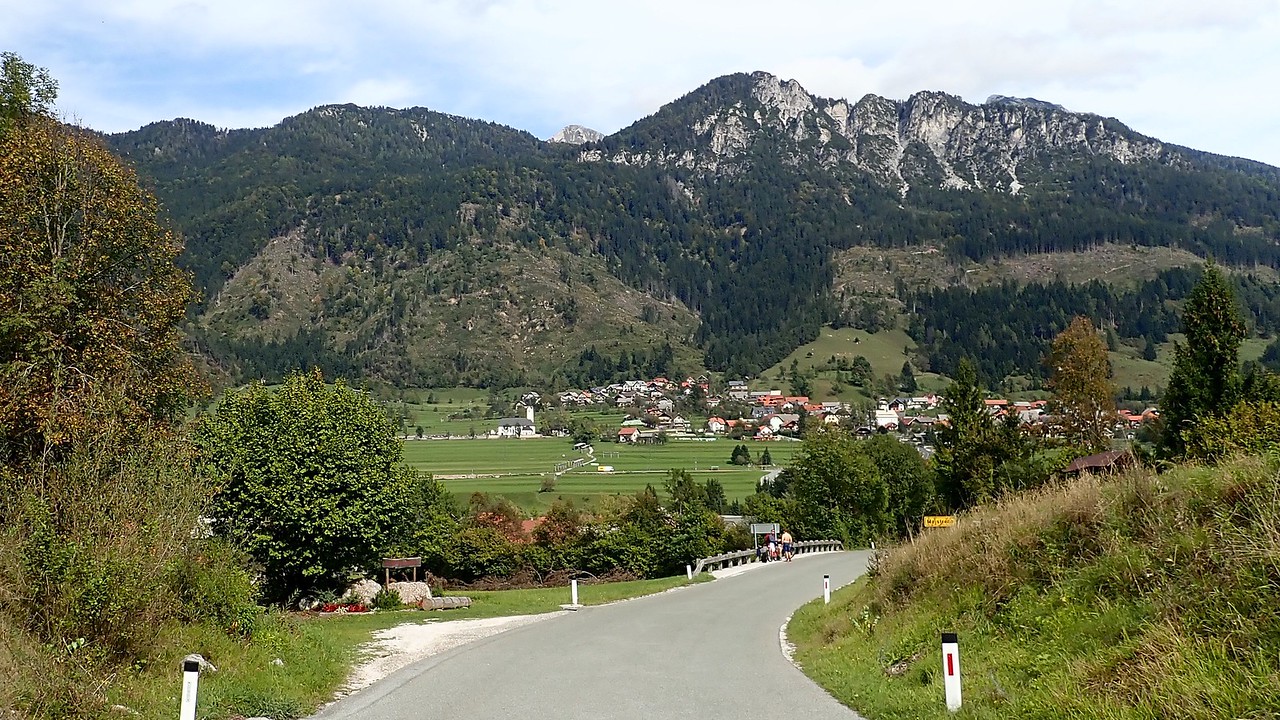 From Mojstrana we followed a narrow, beautiful valley, crossed over a small pass that was also the Austrian border. Woooo! 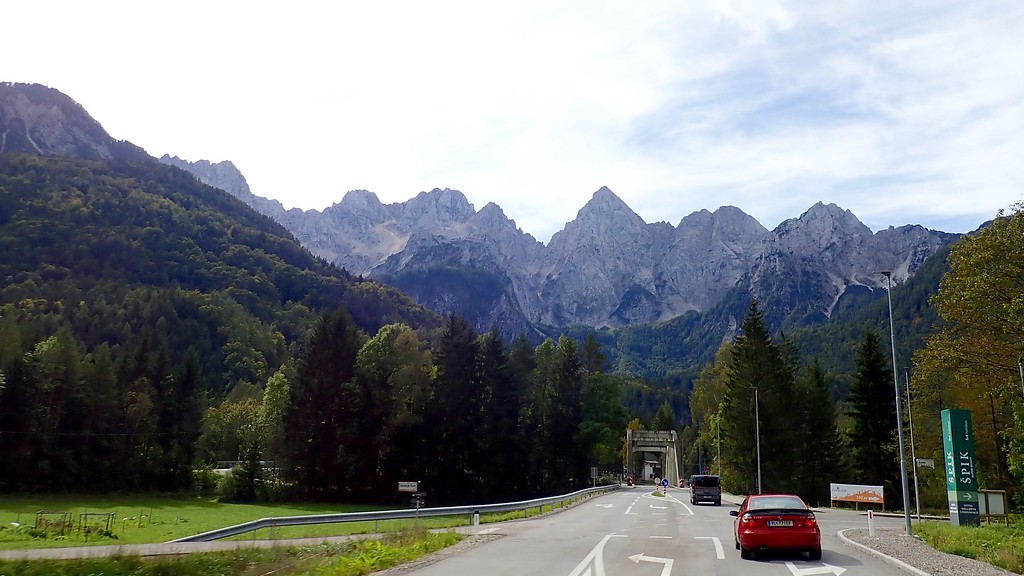 Great artwork at the entrance to some towns

Crossing into Austria was a non-event, although coming down from the mountain pass was a pleasant surprise. I found out later just how close we had been to Grossglockner Pass, but I wasn’t thinking about passes when I was planning today’s route. I was once again (still?) caught up on maintaining the delicate balance of distance and time to home. I think that we hit some good roads regardless.

Austria really is a beautiful country 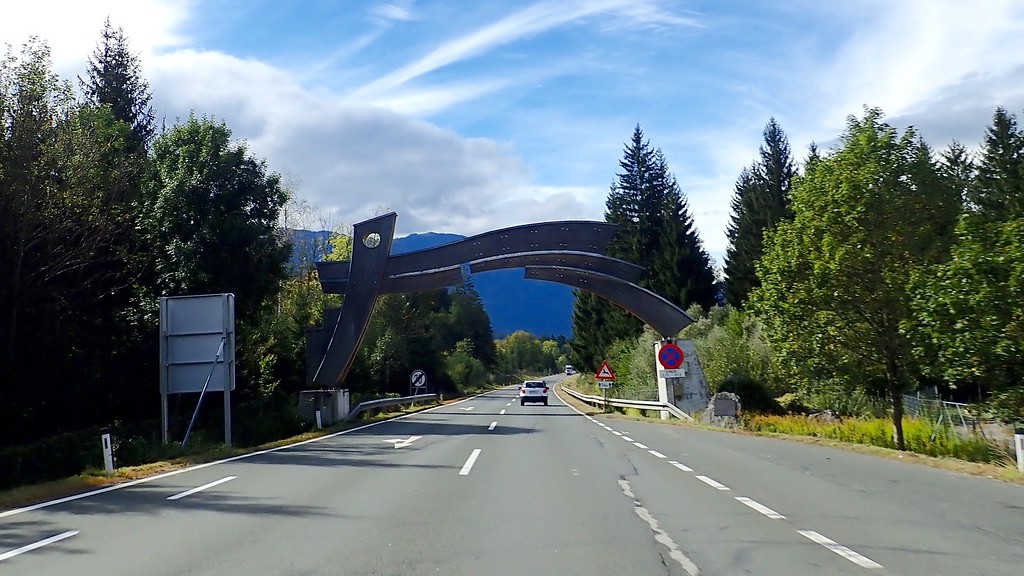 We followed this guy down the pass

At the town of Oberdrauburg we took a sharp left and followed the road for some time down a wide valley. Eventually we stopped at a grocery store for some lunch and enjoyed our meal sitting outside and enjoying the scenery around us.

Turn left at the river, please 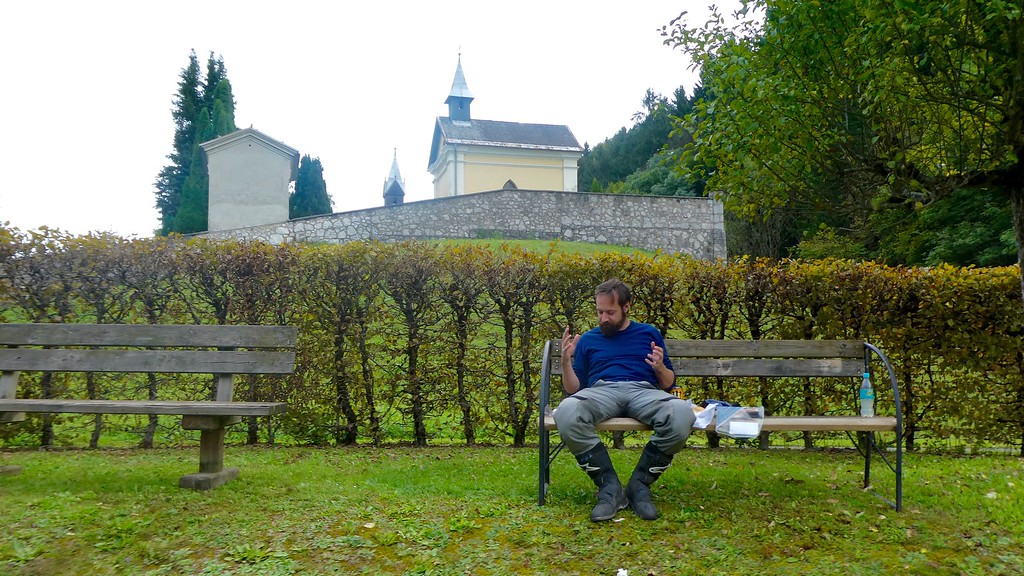 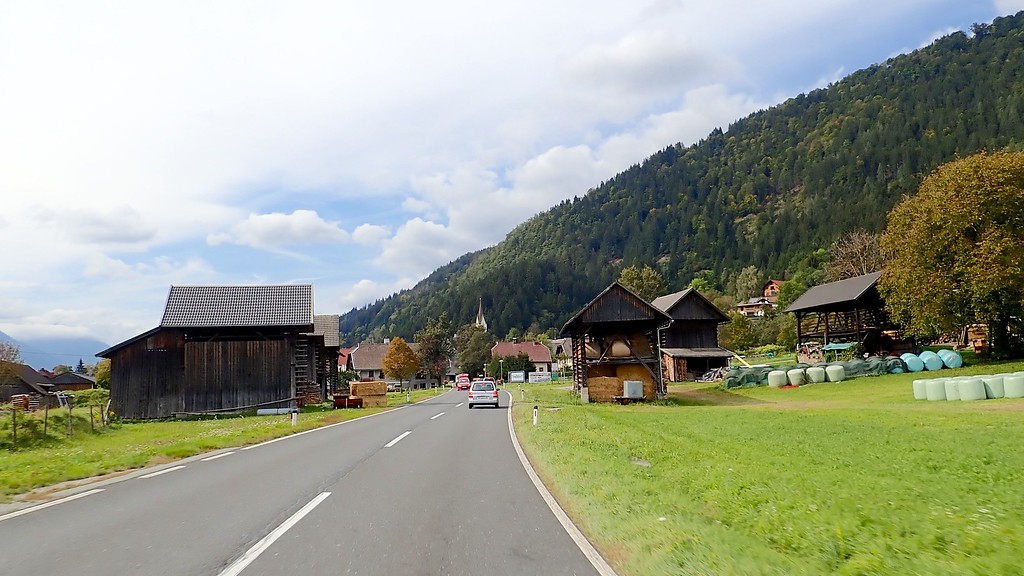 It was a quick ride to Lienz, our destination for the night. One of the drawbacks to an AirBnB vs an outright hotel is that your check-in time can be much more stringent. Our hostess would not be available until 5 o’clock and here it was, barely 3 pm. What to do?

It turned out that our accommodations were quite far from any town center, so we decided to explore the town while we waited for our rooms. We parked in the center of Lienz and then proceeded to explore on foot. It was a bustling day, with tourists and a group of young climate protesters filling the streets of the old town.

To be honest, there wasn’t much to see in Lienz. We quickly found ourselves outside of the city center and poking around along the Drava River that cut the city in two. Not wanting to completely squander our time, we found a motorcycle shop and picked up a fresh can of chain lube. Better late than never, right?

With our purchase in hand, we followed the river back along the far bank and stopped at a coffee shop to while away a bit more time. It was a pleasant place to stop: right on the river, in the sun and close to the bridge that would lead us back to our bikes.

As 5 o’clock approached, we got back on our bikes and headed back to the AirBnB. We had just arrived when a car pulled into the driveway, the hostess anxious about keeping us waiting any longer than we had been. With our reassurances that we hadn’t been waiting long, she showed us to our room and then left us to our own devices for the evening.

It was a simple but clean room, and having already explored the nearby town, we had not much to do for the rest of the evening but read and relax. And plan for one more night on the road!

Our view of the Dolomites that night 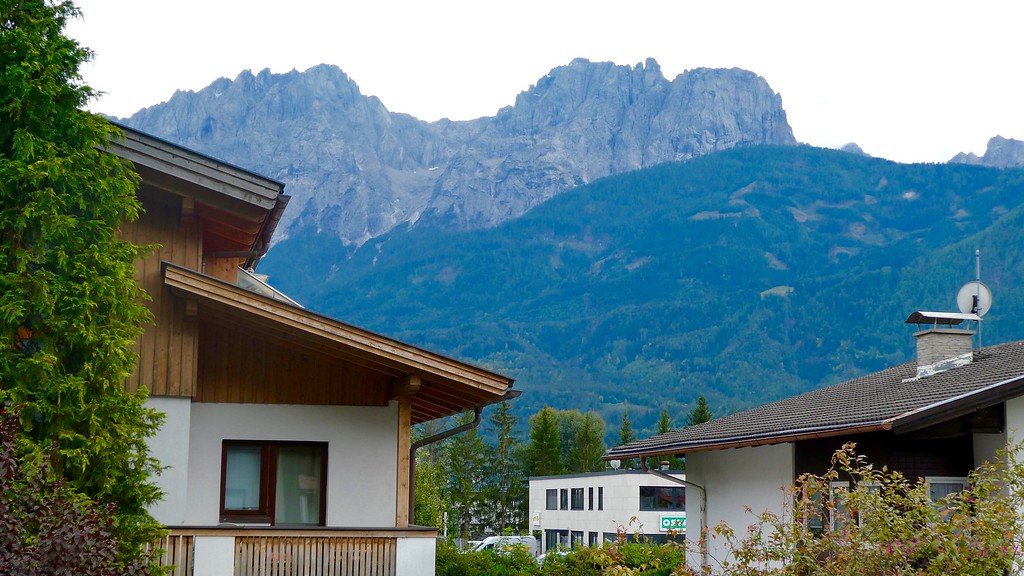