Dan had read that the ancient Germanic people called the region we were in “Windlichland” (“Windy Land”) and it was true: the winds were strong and consistent. We had left the Little Carpathians behind and now we were on an open plain. Left and right were fields of sunflowers and corn. Sunflowers and corn for hours.

Soviet-era signage still outside of some towns

Our route would not show us the most beautiful or interesting sections of Slovakia – or so I hope, since what we saw was not particularly engaging. Still, it was a new country with many small cultural differences that periodically surprised us. One of the most glaring differences was an almost complete lack of farm animals. All of these fields and there were no cows, sheep, or goats. Not even chickens. Just sunflowers and corn. And not enough wind turbines, considering the constant wind that we were riding through.

At one point we pulled off a small side road and had a “tank bag lunch” with some leftovers from last night and extra treats we had picked up along the way. It turned out quite good! 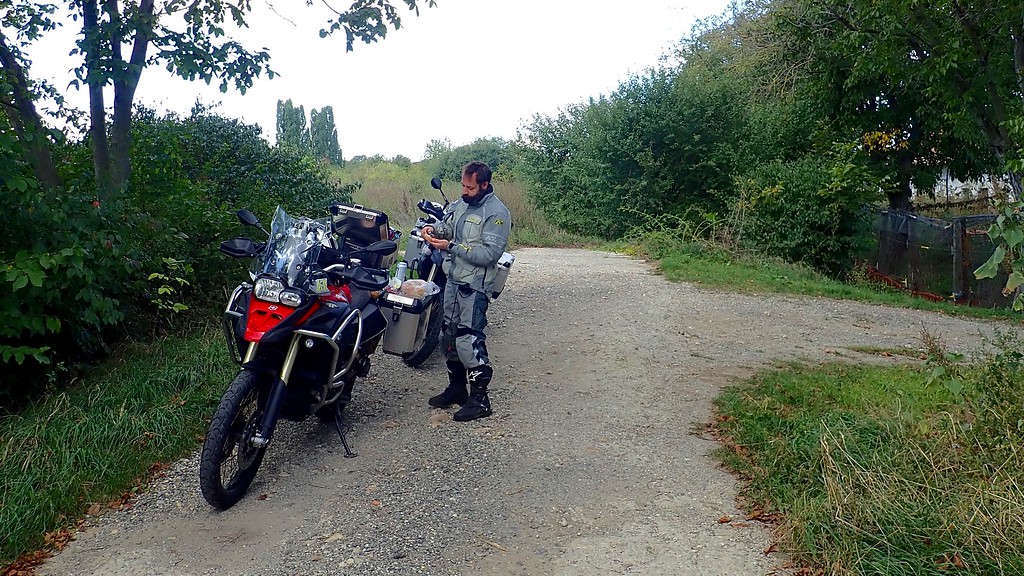 And back to the sunflowers 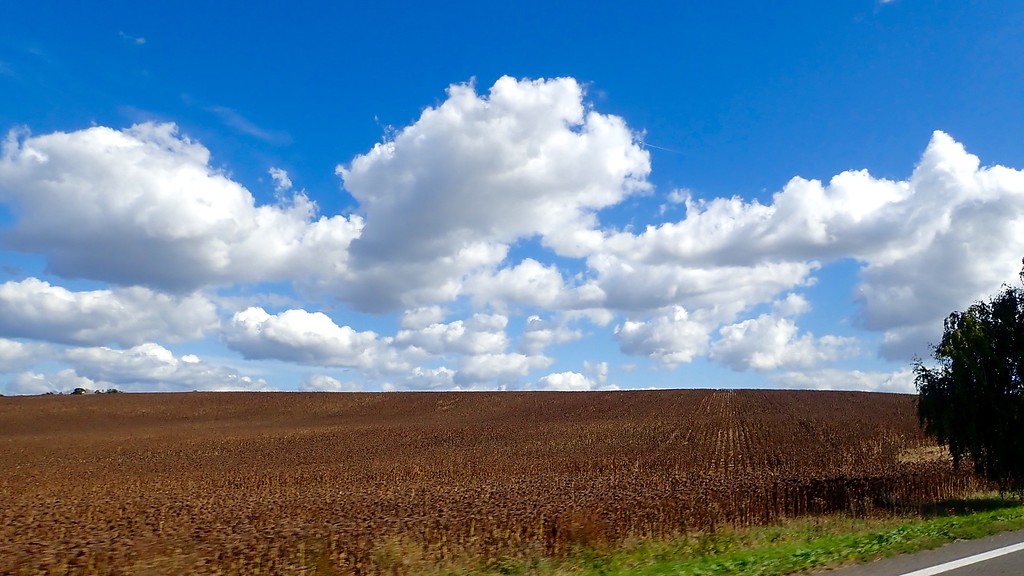 Every town that we crossed through was depressed looking. There were very few – if any – visible business or commercial centers. Just home after home after home. At one point as we passed through one of these towns I saw that a couple of kids were waiting to cross at a cross walk. So far, Slovakia had not given us any indication that crosswalks were for any real purpose as the cars never stopped for anyone in them. This was not my way though, and when I saw two kids waiting on the curb to cross, I stopped for them. They both looked at me with visibly surprised faces and did not appear to understand what to do. I waved for them to cross and they did so, all the time looking at us like we were some sort of aliens. 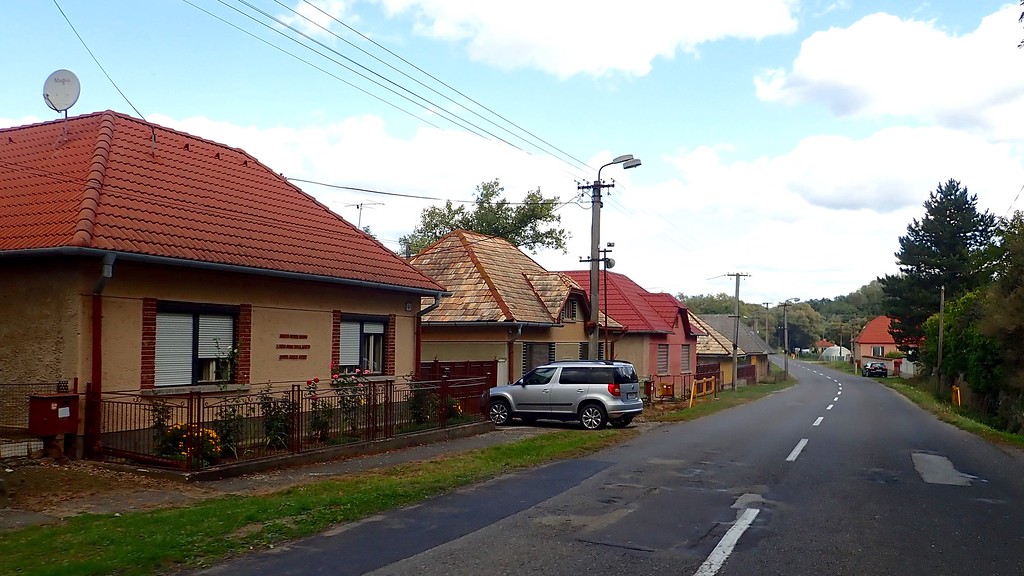 As we passed through the plains on small back roads there was still a surprising amount of traffic. Most were big trucks or really slow tractors, but zipping amongst them were cars that passed in seemingly inappropriate places. The sight of another motorcycle was not be had for most of the day, but unfortunately the frequent sighting of roadkill never let up. 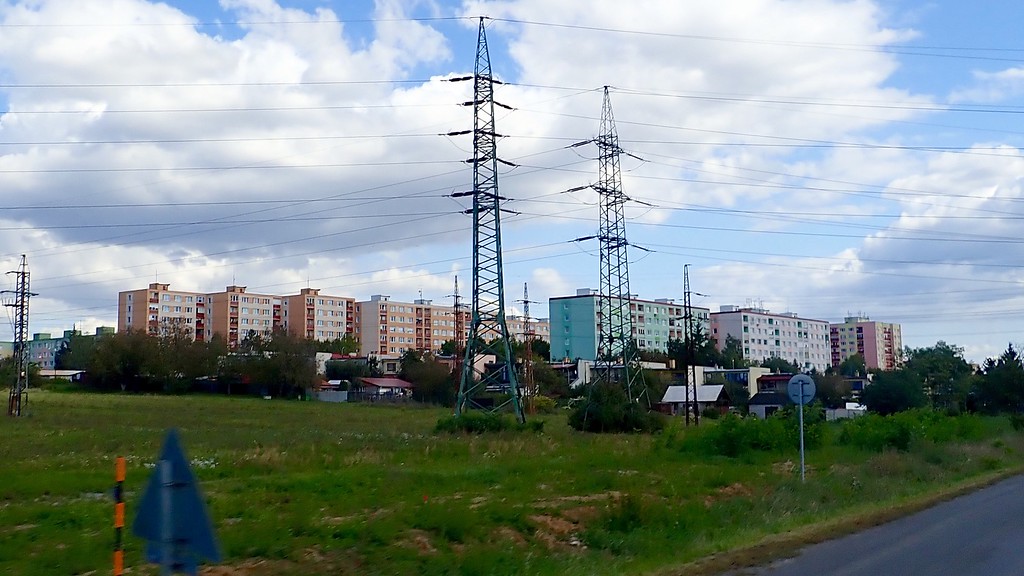 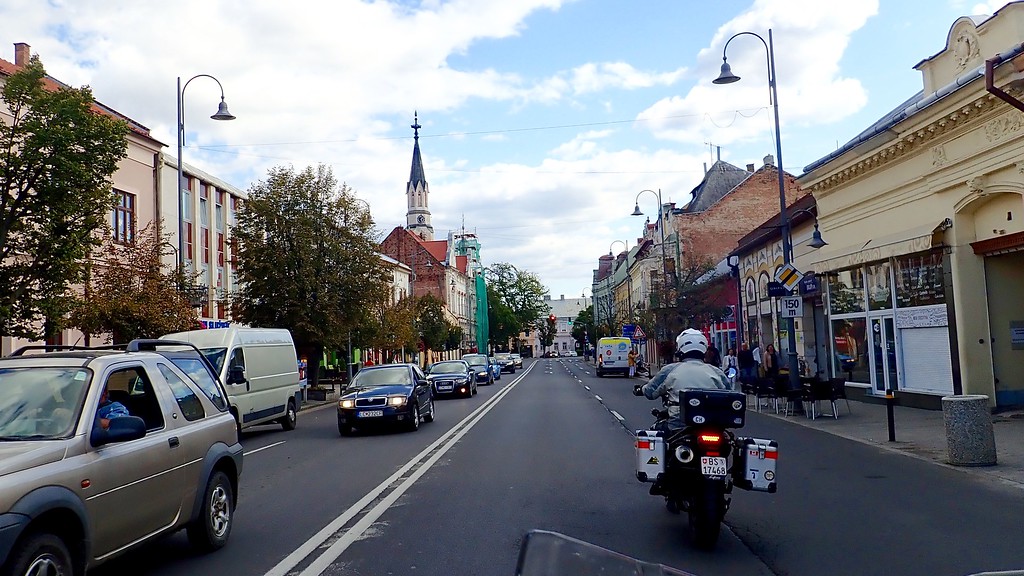 Somewhere north of Budapest (but still in Slovakia) the landscape changed. We found ourselves riding through a lush, cool forest on a road with bad pavement. The traffic had dropped off considerably and we had the road to ourselves.

I was admiring some overgrown, abandoned buildings near a rail yard when I suddenly noticed the sign: we were crossing into Hungary! Well, that snuck up on me! Crossing into Hungary was a complete change of scenery. Industry was king and there were numerous towns full of businesses and traffic and people.

The change was immediately noticeable: much more businesses, more shops, more buildings. This region felt much ricer than the southern portion of Slovakia. 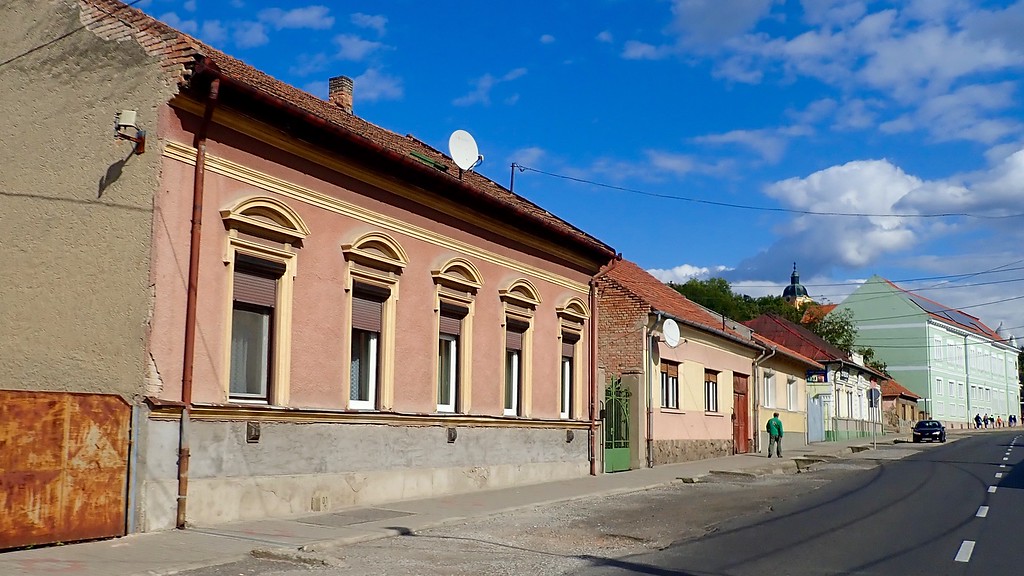 Something caught my eye – for almost two kilometers, the righthand side of the road was built up for the VanDeMark company, a massive chemical plant. It was big enough for me to take note and then find on Google simply because it was too big to miss.

As we fought our way through the city of Miskolc, the GPS had its own ideas about how to get to our hotel, and it entailed some rather questionable dirt roads. While we enjoyed the idea of some dust on our wheels, the options that were before us looked pretty sketchy for two fully loaded bikes on street tires at the end of the day. We retreated back to Miskolc and forced the GPS to find us an alternative route.

Whoops! This isn’t the right road… 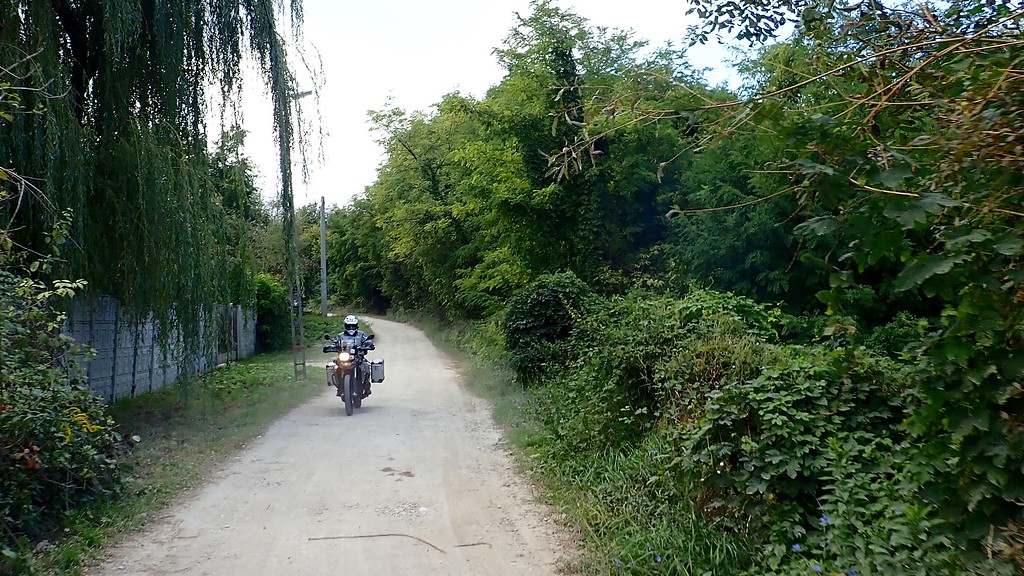 Per Dan’s request, I had booked us into the Calimbra Wellness Spa. But what I was really interested in was the Miskolctapolca Cave Bath that was just down the street from our hotel. 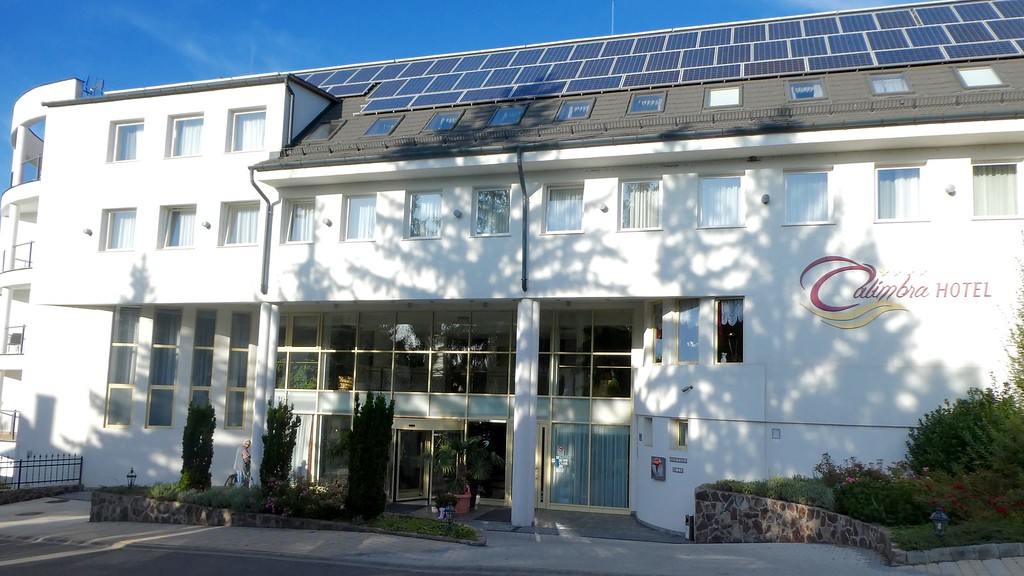 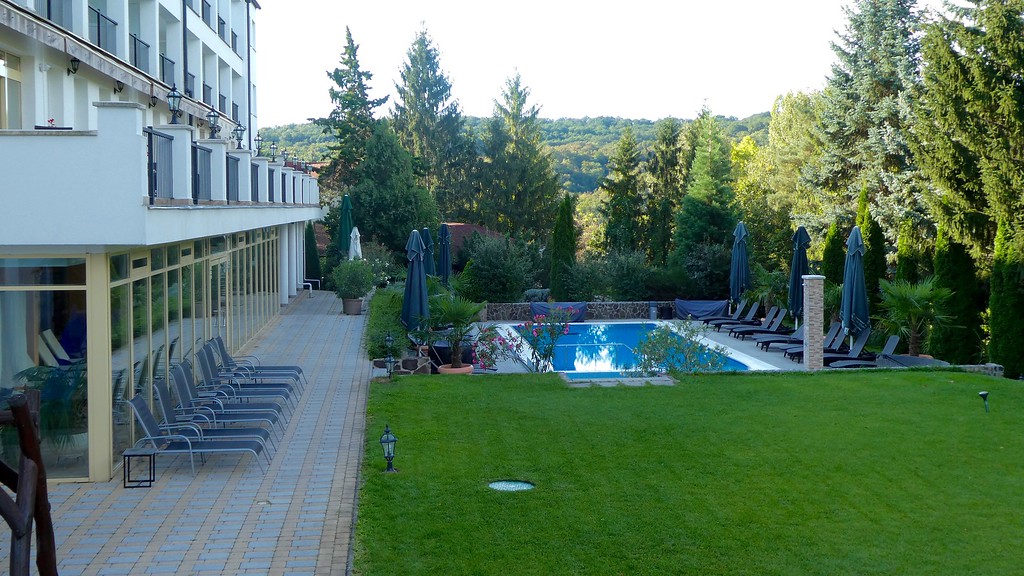 We checked in and when the desk clerk asked for payment, I pulled out some of those treasured Hungarian forints that I had tucked away so many years ago. The clerk looked at them, looked at her colleague and then carefully informed me that some of the larger bills I had were no longer accepted: the country had updated their currency a couple of years ago. Oops. Fortunately we weren’t to late to exchange the old bills and there was a post office nearby that would be able to take care of this for us.

(if I can find it, my Hungarian money photo will be placed here)

After unloading the bikes (I was getting this down to a science!) Dan suggested that we pop into the pools here at the hotel. I agreed, and then we found that we were in time for a full sauna “treatment” – I had no idea that anything other than sitting in a steamy box was possible! But about eight of us sat ourselves into the cedar-lined room while the sauna meister (SM) dabble some aromatic oils onto the hot coals. Steam enveloped the room and the SM flapped a towel around the room, moving the hot air around so that it didn’t all rise to the ceiling. It was the hottest conditions I had ever been in: 90-95°C, 15-30% humidity, and for 15 minutes. It was difficult for me, but I stuck it out!

Our hotel had a dinner buffet, so we took advantage of it and went down for our meal. Dan and I found a nice table for two, took our seats and waited for a server to come and take our drink orders. After she had gone off to fulfil our order, Dan and I got up to check out the buffet. It was an ok layout of food, and I had no trouble filling my plate. However, when I returned to our table I saw that there was a sweater on the back of my chair. I put down my plate when a man come over. “This is our table” he said. Um, no – we had already placed our drink order and had been sitting here. “This is our table. See my wife’s sweater?” he insisted. That’s nice, but we were here first. “This is our table” – again. I sighed and picked up my plate. Clearly it would just be easier to move to the next table over than to try to win this argument.

This is where my disappointment hit: after dinner I checked and only then realized that the awesome Cave Baths down the road closed at 8 pm. The one things I really wanted to see from Hungary and I had missed it. A couple of photos from my internet research that had piqued my interest…