One of the goals of this trip was to visit the town of Priem an Cheimsee. I had heard good things about the area, including the lake and especially the islands capped with gardens and palaces. I was eager to see them for myself and this was the perfect opportunity.

One of the benefits of today’s navigational tools is that while I may not know of “must see!” routes along the way, the sight of a squiggly line on the map has a certain draw and the GPS made it easy to find. This morning’s route would take us on such a route, and Sudelfeld turned out to be quite a fun little pass.

For over an hour we explored the mountain pass with very little traffic to delay us. The views were quite delightful, and the sight of clouds filling the valley below was like bowl full of cotton. 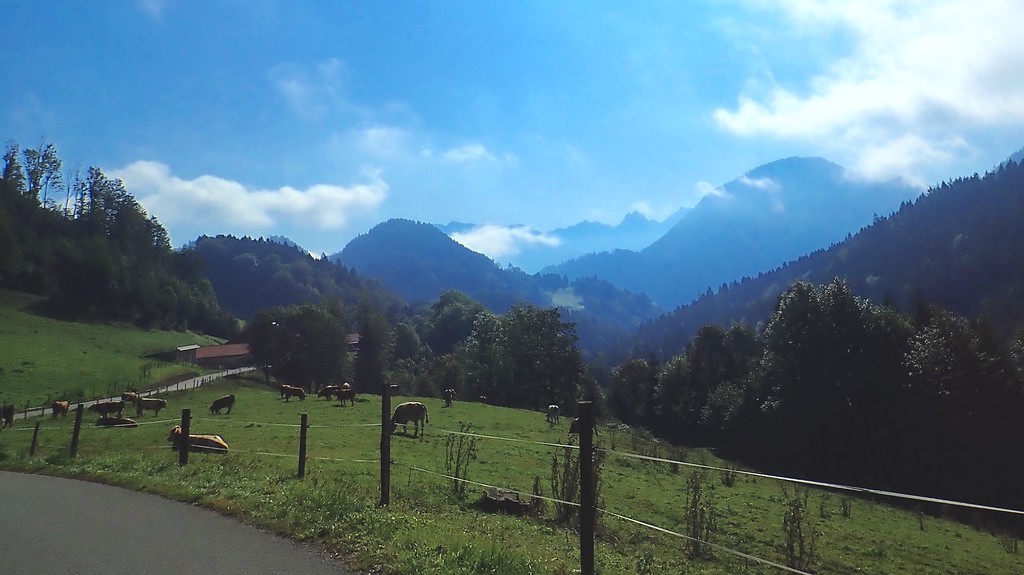 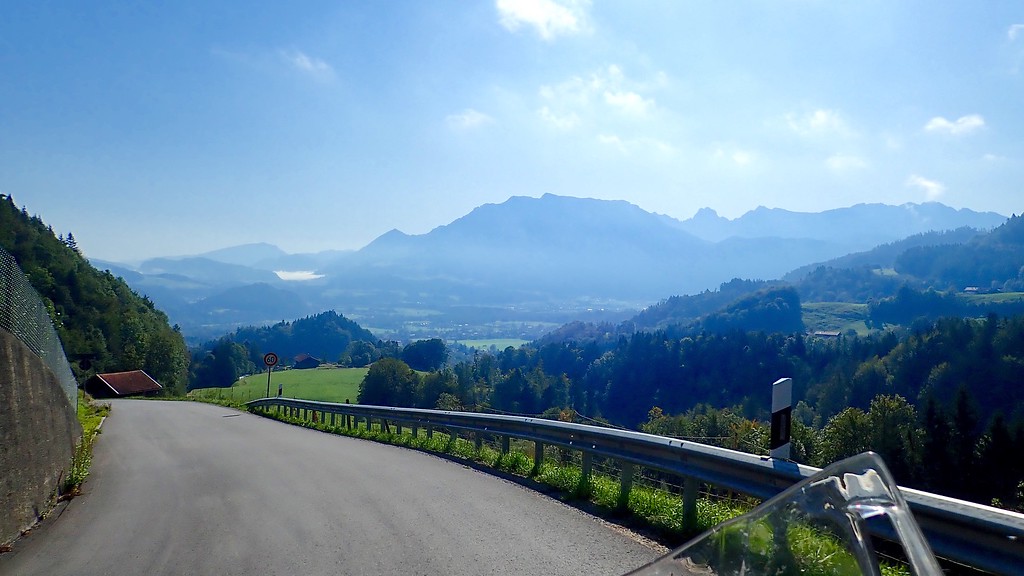 An oncoming car flashed their high beams at us at one point and I wondered what the reasoning was. Soon it was apparent: the police had set up a speed camera in the corner. Fortunately I am a slow rider and they had nothing to pin on me!

In one of the small towns we wound through we were met by a sidecar rider. What we found most interesting was that both the driver and his passenger were in full military camouflage and the drivers’s wave was much more like a salute than anything else. I’m more than a little sad that I didn’t get a photo of him.

But I did get a shot of these horse and wagons! 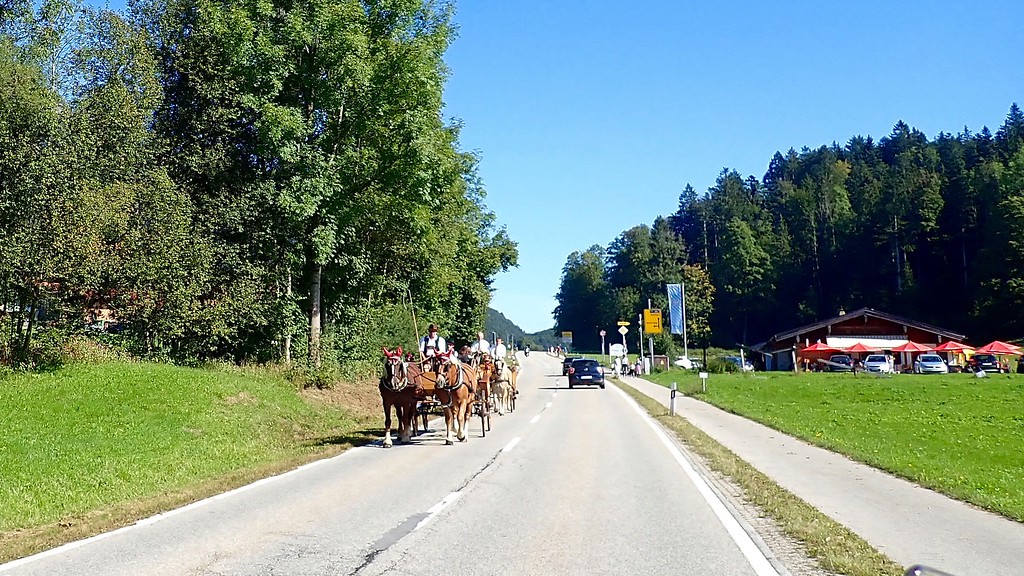 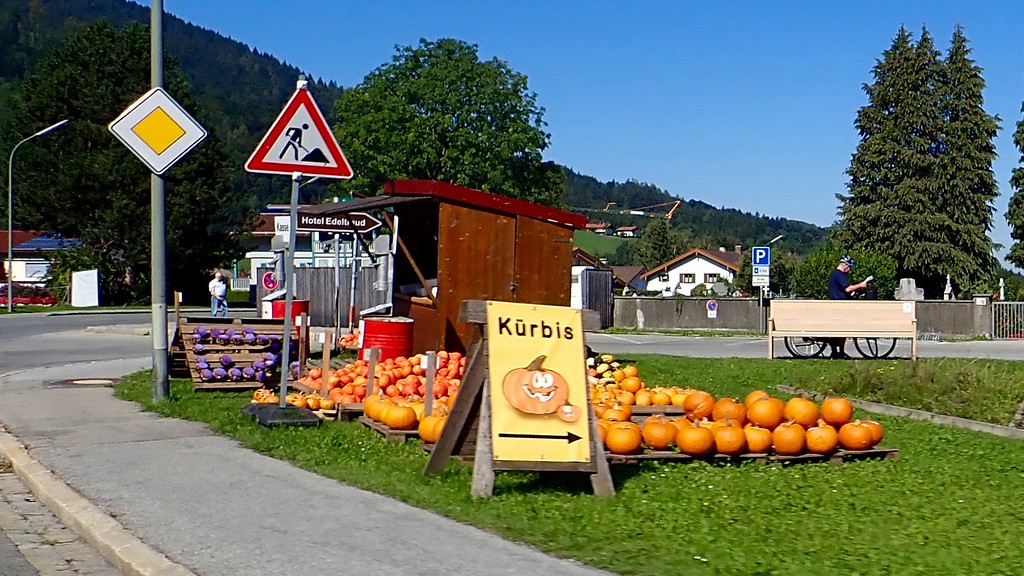 We arrived in Priem an Cheimsee early in the afternoon and found our AirBnB for the night. The ad for the space cautioned us that while the apartment was right on the main road, the traffic was not constant and would give us a quiet evening. The ad was sort of right: the traffic died down, but not until fairly late in the evening. Even so, the space was comfortable and clean, and fortunately looked nicer on the inside than the outside. We were early, but the host was accommodating in that we could leave our bikes and gear nearby, as the room was not ready for us yet. We changed and then made the 12 minute walk to the lake.

It was an uninteresting walk to the lake front and once there, we found lunch at the Restaurant Westernacher Chiemsee. The meal was simple but good, and afterwards we wandered our way over to the docks and bought tickets for a boat ride. We chose to visit Herreninsel (officially the “Neues Schloss Herrenchiemsee”), but skip Frauenchiemsee (“Frauenwörth Abbey in Chiemsee”), as we were interested in the gardens and landscaping, whereas Frauenisle was known primarily for the Abbey.

The ferry boat was comfortable and spacious, although I could easily see that in the high season it would be packed with tourists making the trip out to the islands. I could not believe how many private and rental boats were out on the lake – I think that only time I’ve seen so many boats under sail was at a regatta. It looked like it would be a challenging place to sail, what with the other sail boats, the ferries, the private motorboats (electric!) and human-powered watercraft all vying for attention.

Soooo many boats on the lake

Our boat sailed around to the back side of the island and sidled up to the long dock. We disembarked and made our way to the information booth / gift shop / toilets. At least they had this laid out well! We declined the entry into the Schloss and instead took a path in the opposite direction: we would meander along the island’s many paths and planned to stick close to the outer edge of the island. The outbuildings were all in use and the pasture land was clearly being grazed regularly. It was nice to see that the farm was “working”, even if not to its full potential. After crossing some open fields, we entered the forest and enjoyed the pleasant weather and almost complete lack of people. Eventually our path led us to the Schloss and the gardens.

Walking around the grounds 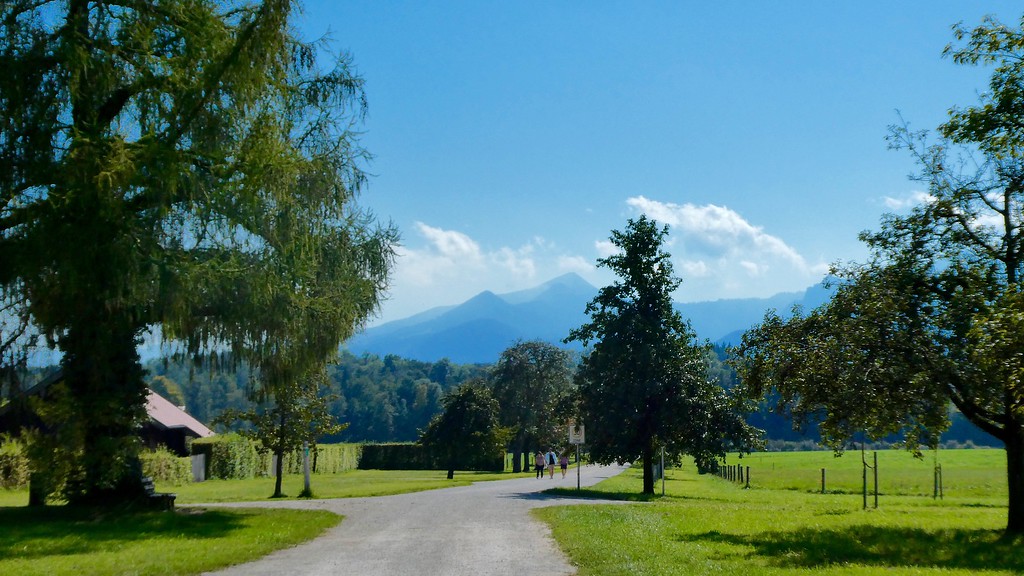 Good views of the surrounding mountains – and more boats 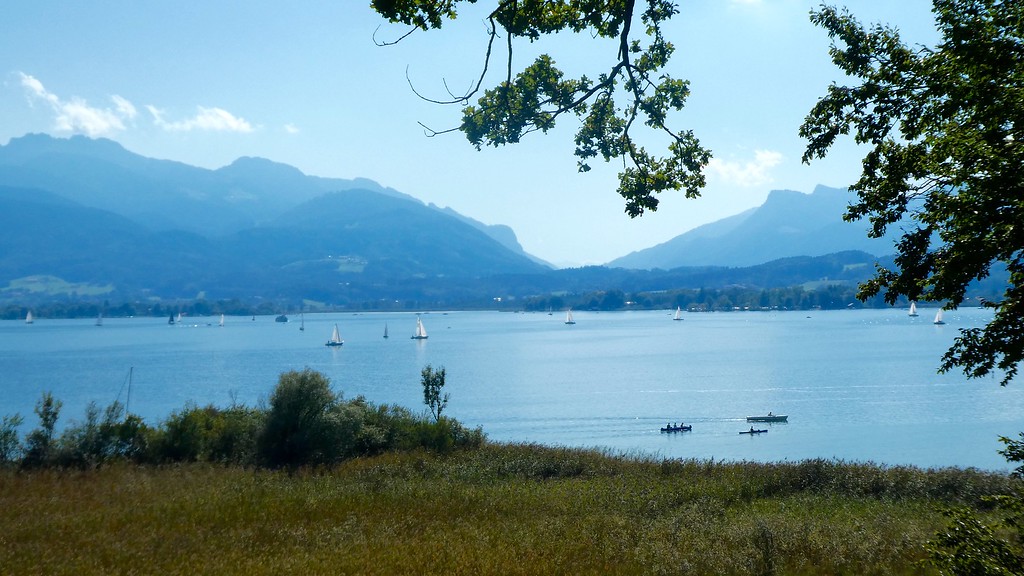 Sadly, the gardens were skimpy and barely worth noting as “gardens”. Sure, I expected that at the end of the season the primary blooms would be past, but it looked like there wasn’t much to bloom in the first place. But then again, the grounds were never fully developed, as wiki reports “from 1878 onwards, [King Ludwig II of Bavaria] had the New Herrenchiemsee Palace (Neues Schloss) erected, based on the model of Versailles. It was the largest, but also the last of his building projects, and remained incomplete.” 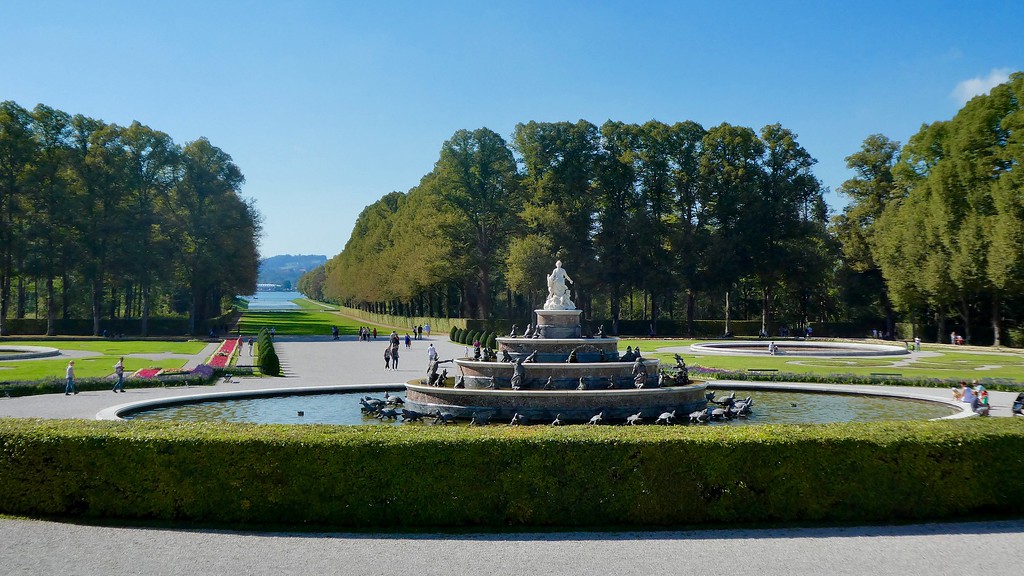 To me, the Schloss lacked character, although if you really looked, you could find some interesting details in the exterior design. Out front, the fountains were impressive, although the water stopped flowing shortly after we arrived. One benefit of this was that I could see the statuary that made up the fountains without the interference of the flowing water.

Massive fountain statues, but water stopped flowing shortly after we got there 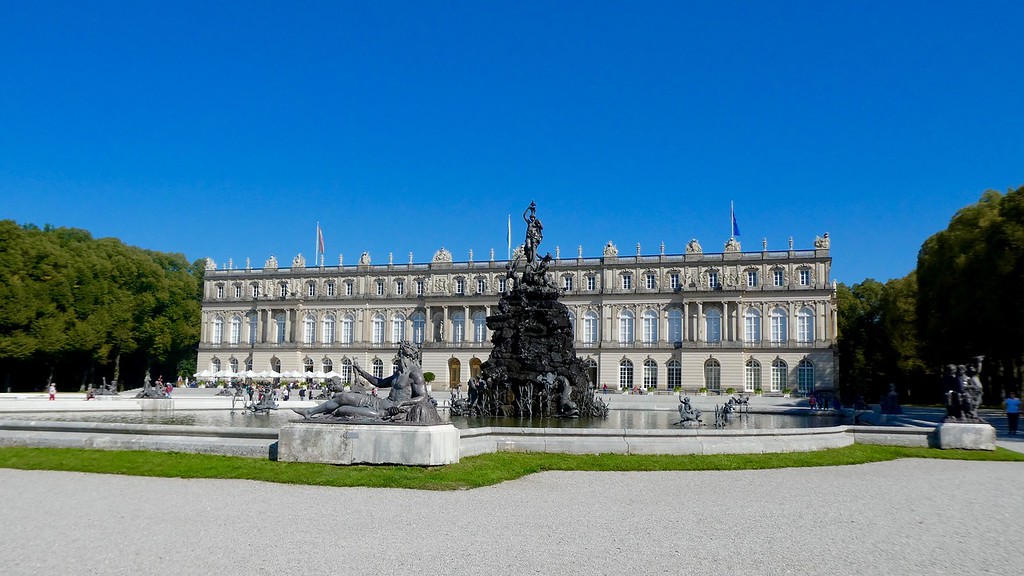 Who thought this was a good design?

The view as I had taken it from the mainland, but now without the need for a zoom lense 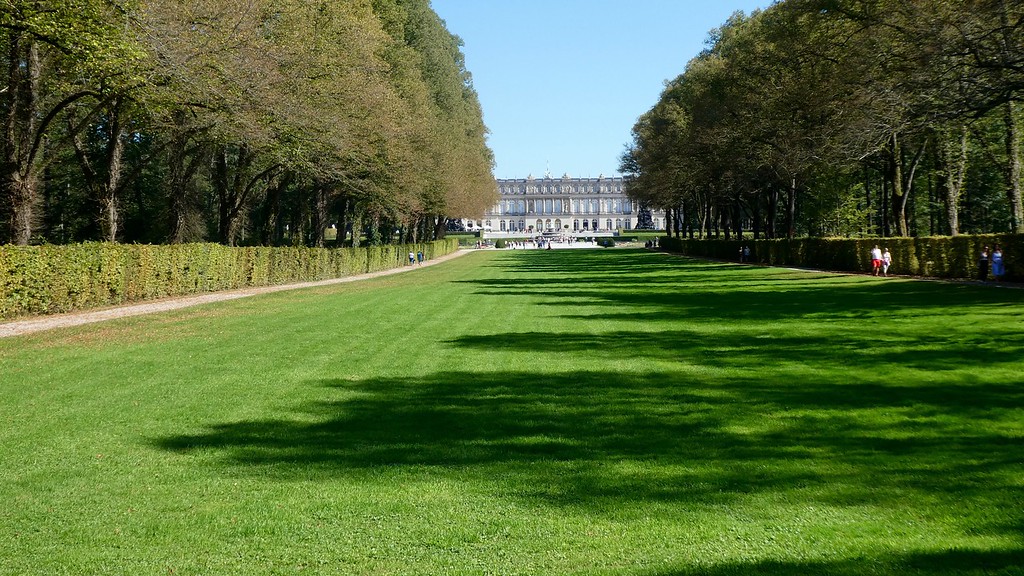 We had exhausted our interest in this island. The walk back to the dock was quick and we waited in line for a ferry to arrive to take us back to Prien am Cheinsee. Once back on the mainland, we grabbed some fresh ingredients and went back to our BnB to make a quiet dinner and plan out the next day’s route. I had work to do!