Today was the day that I would find out if my decision was a good one.

I had chosen our current location in Mediaș partially for its proximity to the Southern Carpathians – and the famous Transfăgărășan Pass. I deliberated for an exceptionally long time about our options in heading south. The Transfăgărășan was the obvious choice, but I don’t always go for the obvious. The decision was complicated by the presence of a second pass, the Transaplina.

Everyone knows about the Transfăgărășan Pass. The internet is full of photos and videos, and even Top Gear filmed an episode there. But what was this other, lesser-known pass? I researched a bit and found minimal information, primarily that the current road was built in 1932 (based on shepherds’ tracks from antiquity), is the highest pass in the Carpathians, and work began in 2007 to turn it into a “modern highway”. Ahhh, that’s probably why it is relatively unknown: it is too new!

Excited to explore this “new and relatively unknown pass”, we left Medias behind and headed west – we’d follow the valley that we had seen from our mountain bike trail hike the other day.

We were heading towards the town of Alba, at which point we’d turn south and make our way over the mountains. I was pleased to see that the weather, while cool, was clear and dry. Mountain passes are much more enjoyable when there is no rain – or snow. 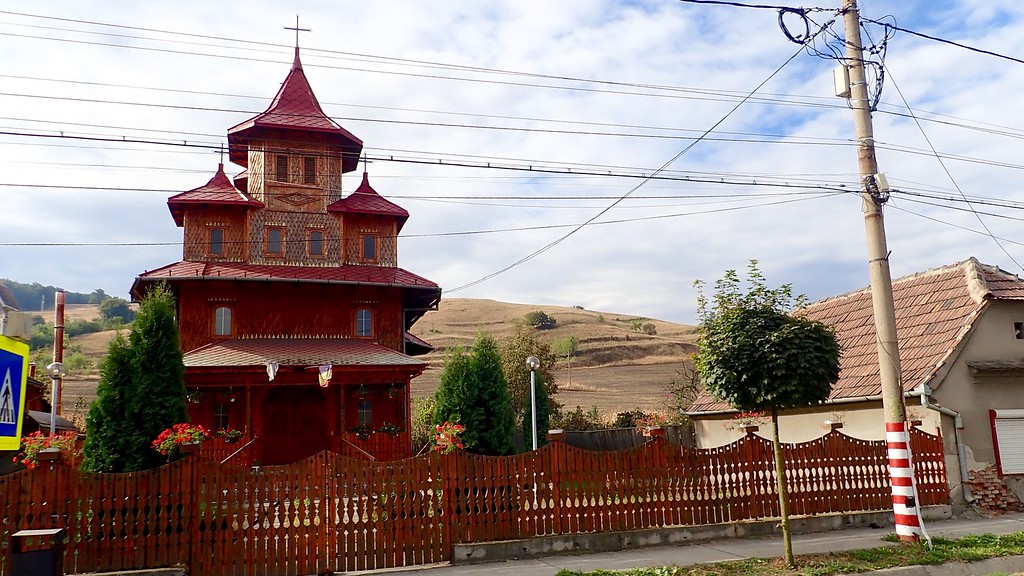 Following the valley to Alba

We stopped just north of Alba to fill up our bikes, as it is always nice to have a full tank before entering the mountains. Plus, Dan’s bike has a small tank – hahaha. We pulled into a station on the far side of town and after filling both tanks Dan went inside to pay. While waiting for him I started to play around with the GPS, making sure that the route programmed was the one I wanted. During this, I noticed out of the corner of my eye a man walking by. He was staring at the bike with a rather vacant, distant look in his eye. Then someone else wandered by, also staring. They both ended up at the far end of the station yard, where two other people had also made their way. None of them seemed overly alert to their surroundings – Dan likened them to zombies. And so I present to you, the Zombie People of Romania:

Zombies in the background

We’ve been known to skip gas stations when the names and colors are beyond our comprehension! 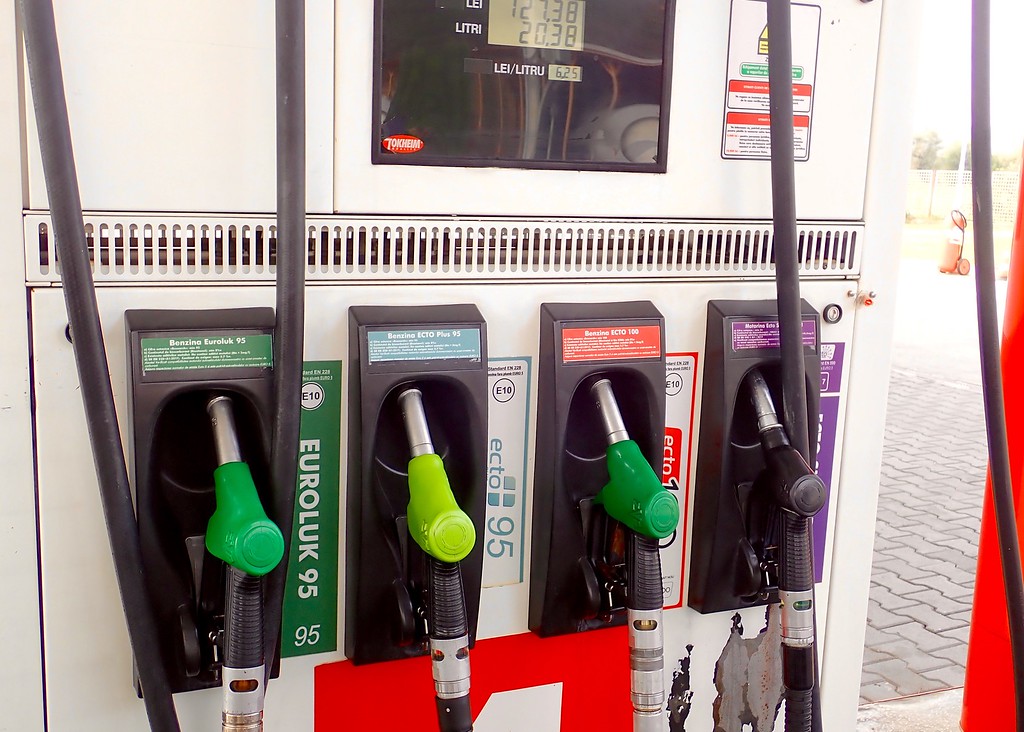 Everyone has something to sell… 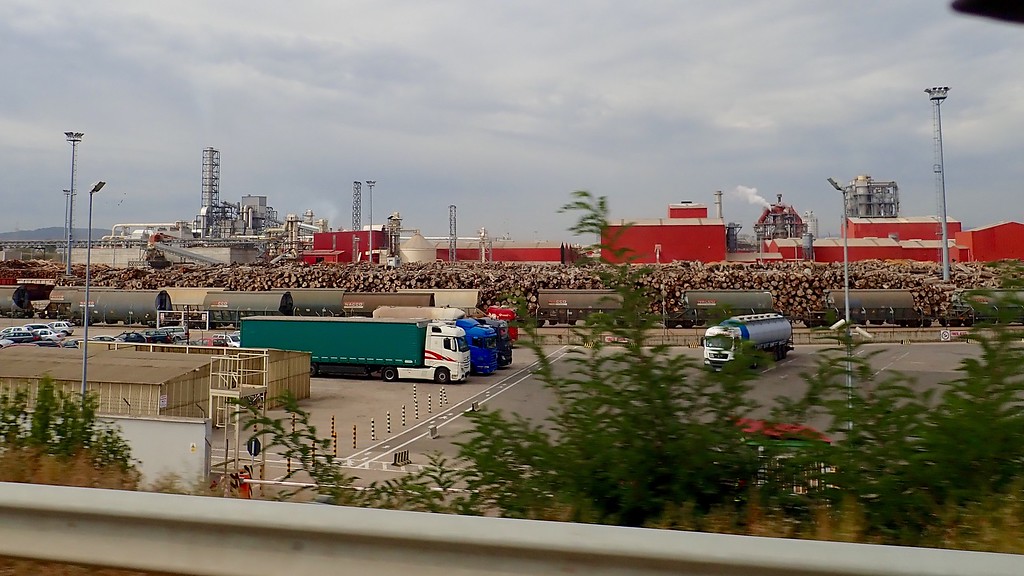 At the city of Sebeș we turned away from the buildings, the construction and the traffic and embraced the nature of the Carpathians. 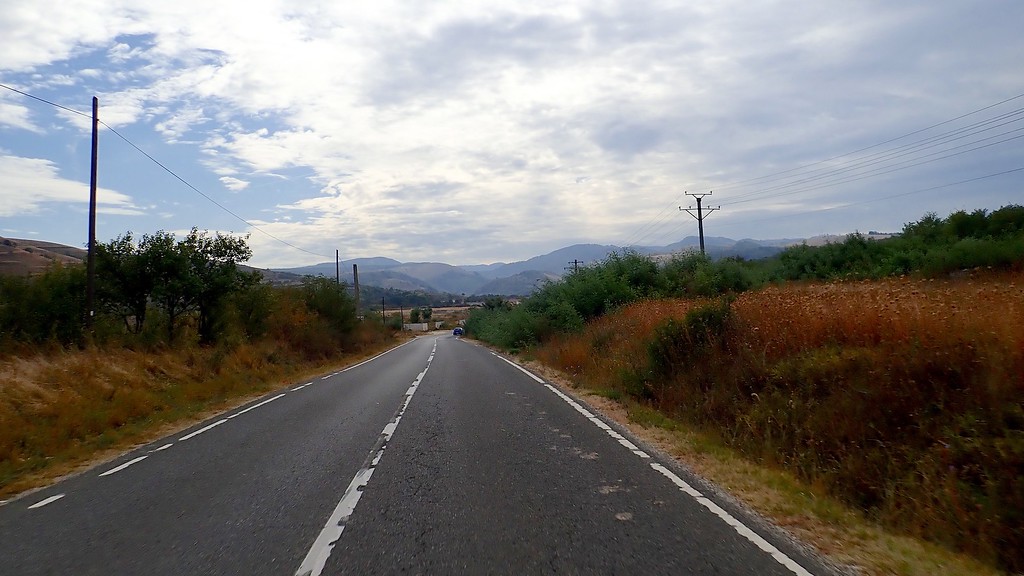 The approach held great promise: infrequent villages were serviced by a freshly paved road. There were enough curves to make things interesting, yet not too many to keep me from looking around. It was a great combination. 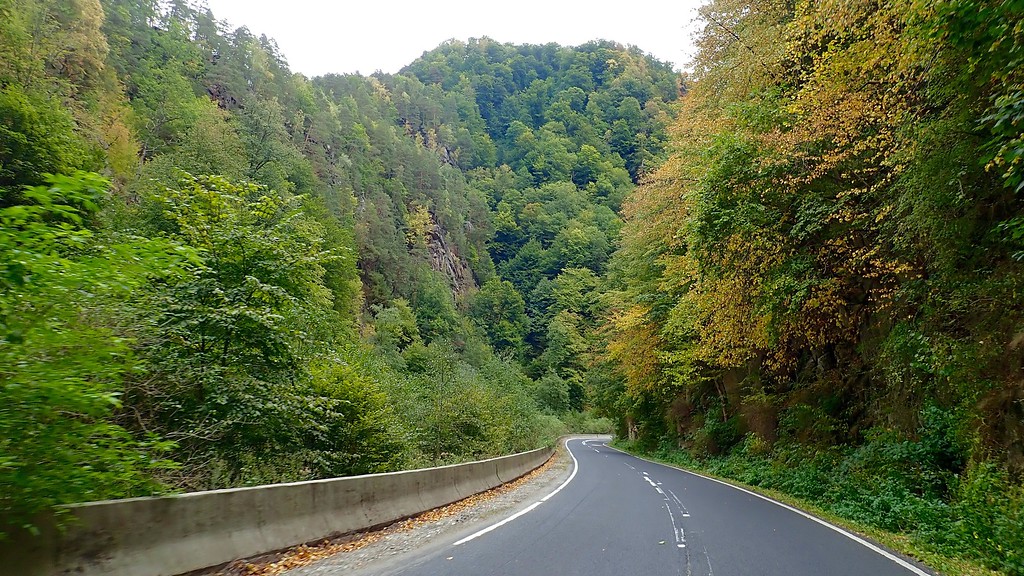 The approach from the north was gentle. Subtle, even. The gain in elevation was almost unnoticed and the lack of buildings made the kilometers pass easily. And then suddenly, without notice, we were at a lake. Oașa lake stretched out before us, a red and white fenced bridge crossing its grey expanse. We pulled over to switch up our gear and I took a quick look around. There were a few hardy souls selling food and trinkets, but not many people were here to shop. The weather had taken a slight turn and there was the faintest of drizzle coming down. Nothing that would interfere with our plans, but warmer gloves were in order. 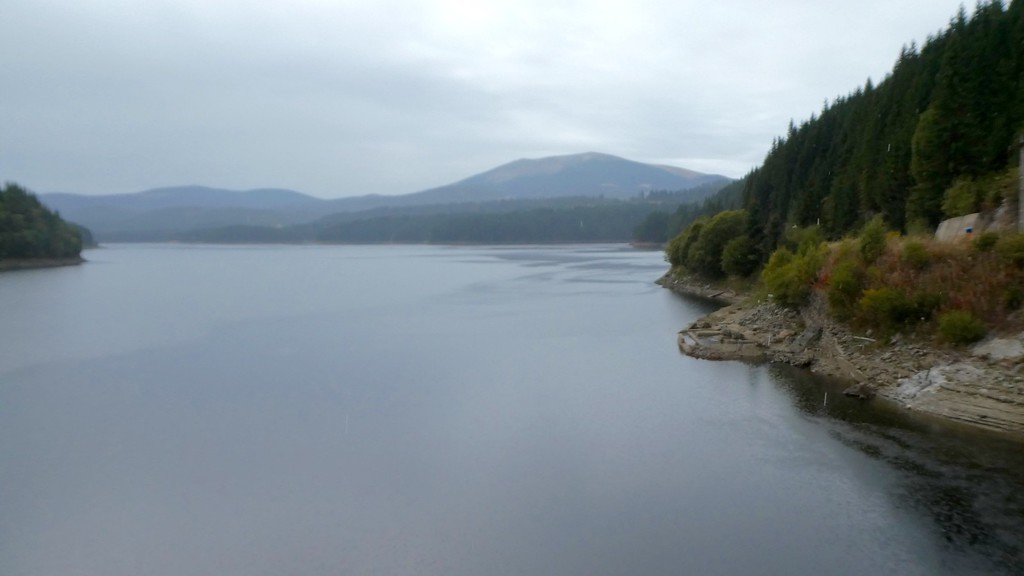 Crossing the bridge to the other side 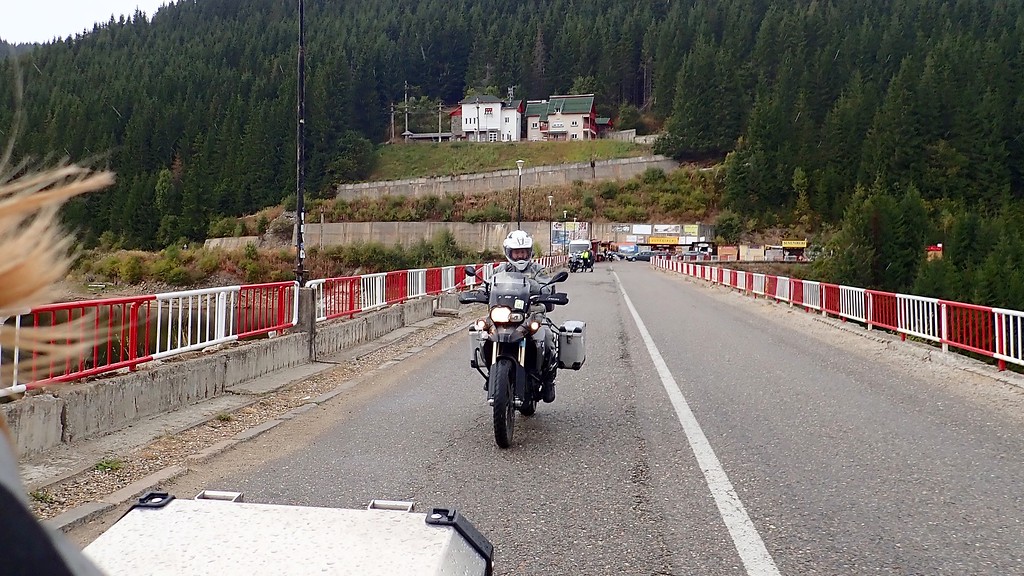 I assumed that at this point the road would descend, opening up to some wide vistas. But this was delayed, as the road instead snaked along the shore of the lake. And that beautiful smooth pavement? That was a thing of the pass. We were back to standard Romanian road conditions.

Accommodations for those who need more time in the area 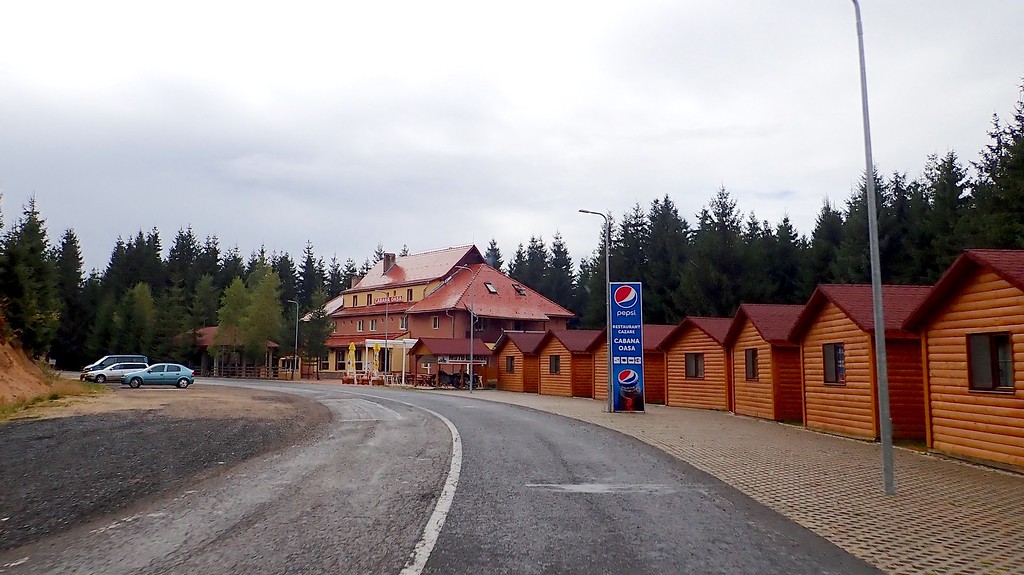 Forestry is a big industry here (taking a break) 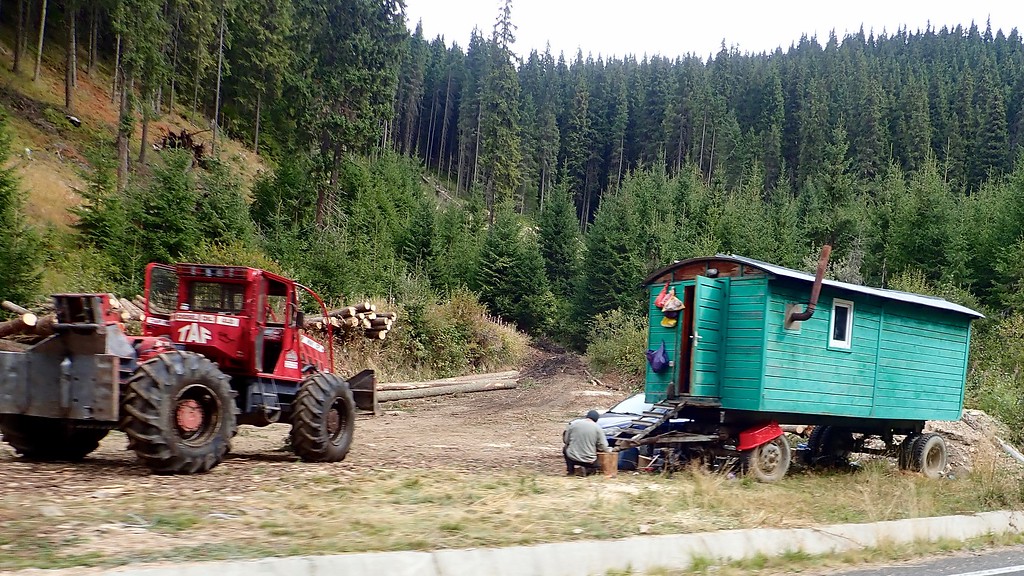 Leaving the lake behind and starting our descent

Good to know that she is ok! 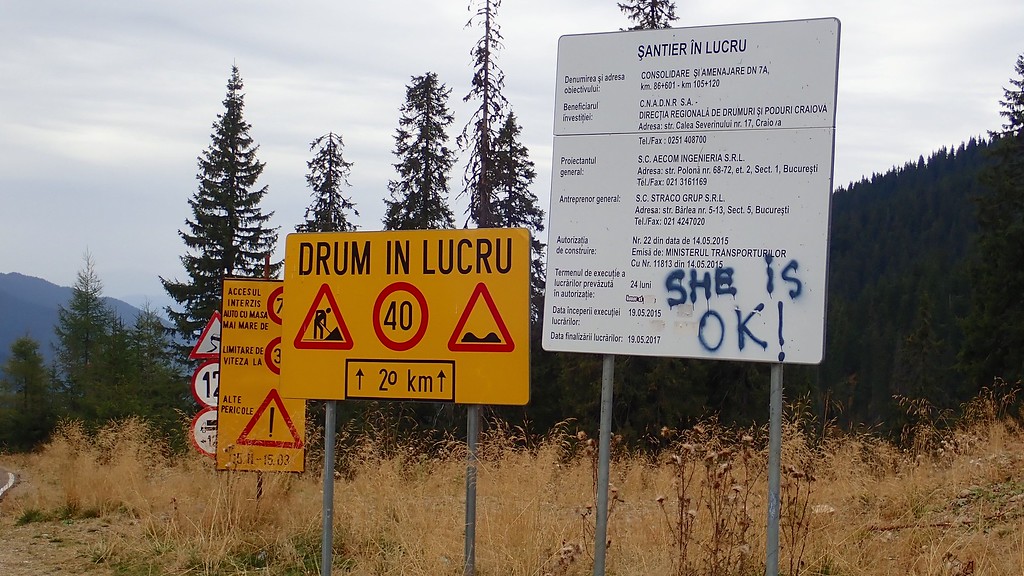 The descent was gradual and the trees prevented any of the grand vistas that I was expecting. Perhaps I had read the wrong description online? Or who knows, maybe I was on the wrong road. Stranger things have happened. But whatever the case, Dan and I enjoyed our time coming down the mountain and when we reached the intersection marked as “Obârşia Lotrului” on googlemaps, I figured “that was that” and we were back on flat land. I was wrong. 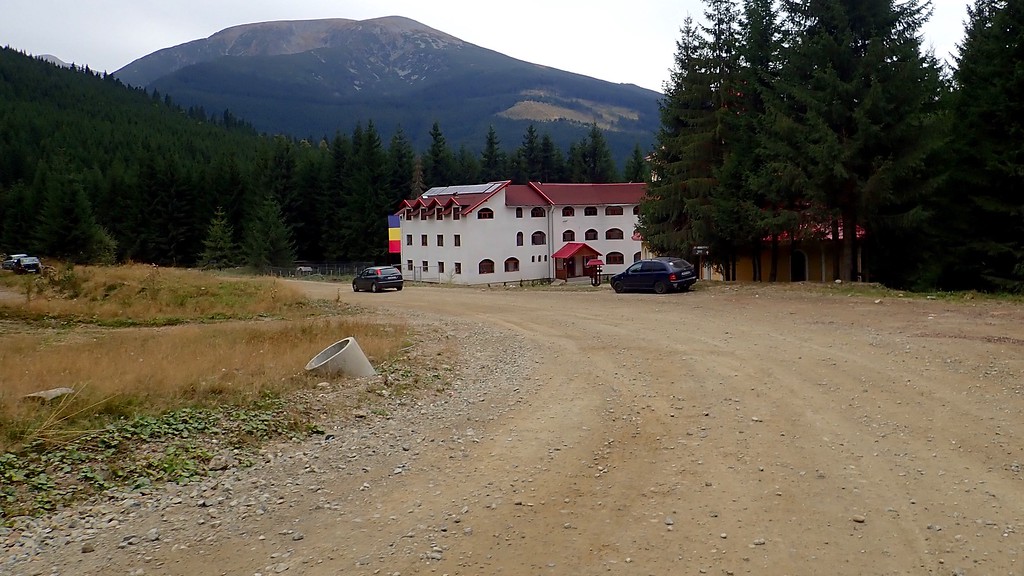 This was unexpected. For about ten kilometers Dan and I traversed a mixture of dirt and gravel while I wondered how on earth I had missed this in my research? I mean, it wasn’t a problem for us: our GSs were built for just these conditions, and the weather was good enough to not cause any problems. I guess when I read that the government had “opened the road” I just assumed that they had also paved it. Watching two small-displacment sport bikes make their way up did make me wonder what it would have been like if we’d taken Transfăgărășan Pass instead. 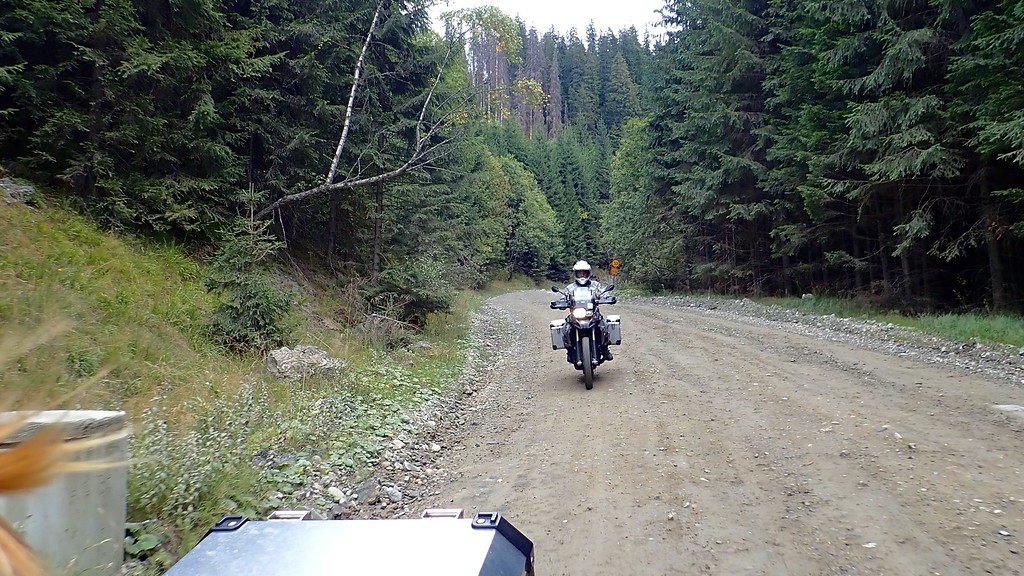 Eventually the pavement came back, but I soon wished it hadn’t; it was in worse shape than the dirt road. We weaved our way around the bigger holes and exercised the suspension on the smaller ones.

I never tried to photograph the pavement before…

Having four wheels makes it trickier

The road nestled itself into a narrow canyon and I was glad that the traffic was as light as it was. The “bad pavement” lasted for about twenty kilometers. Twenty fun kilometers. At one point there was a construction crew working on one of the retaining walls – the fact that there was any work at all being done on this road surprised me. And apparently the crew was just as surprised to see me, based on what Dan told me. Dan was riding behind me and he saw one of the guys make the facial equivalent of “That’s a GIRL!” as I rode by.

I have no explanation for the angle of this shelter 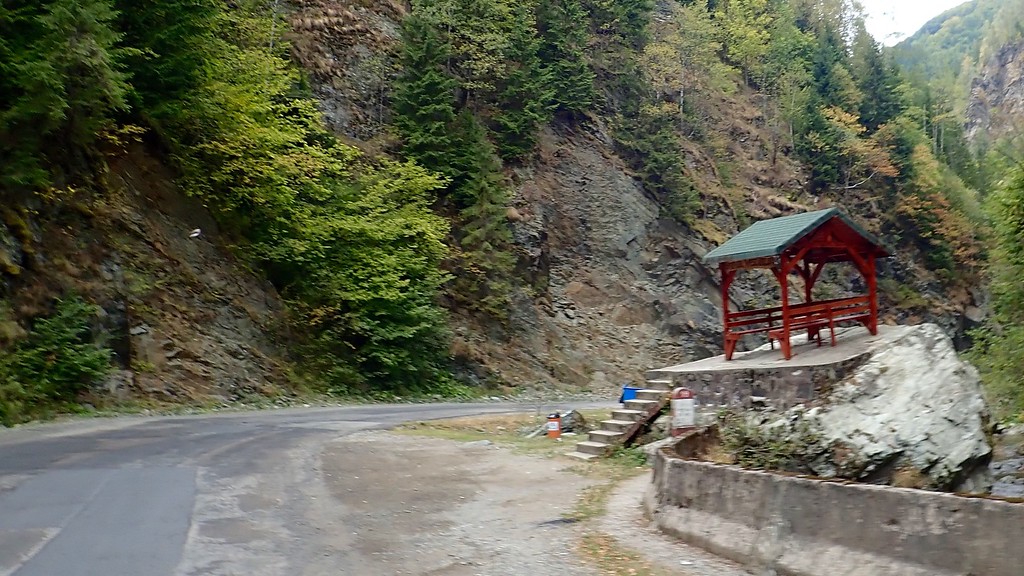 Marking the end of the mountains 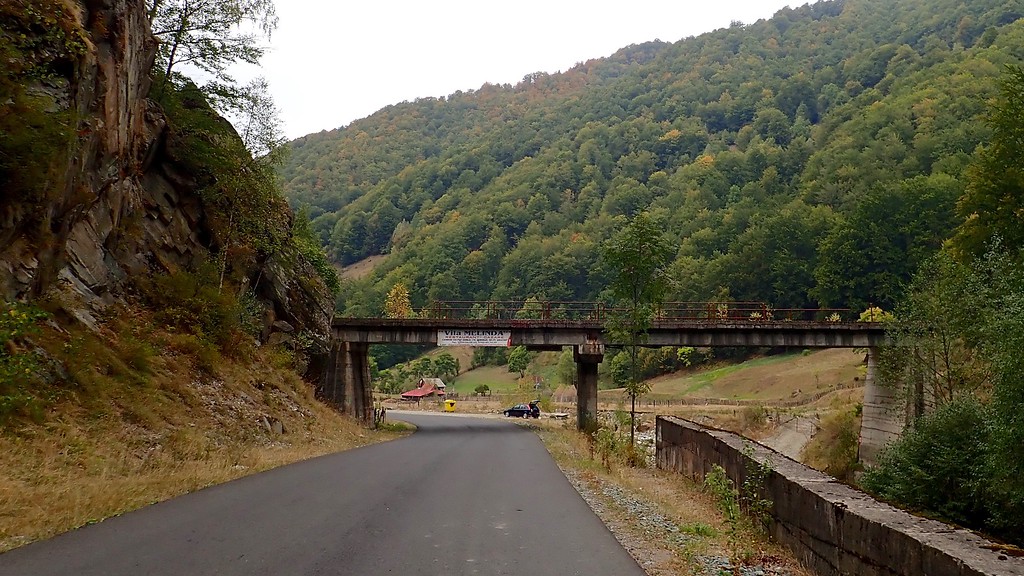 Someone likes their private space

Did I say that we’d reached the end of the mountains? I was wrong! Sure, we were over the pass, but there were still a few hills that needed to be avoided, much to my pleasure. This was a great day. 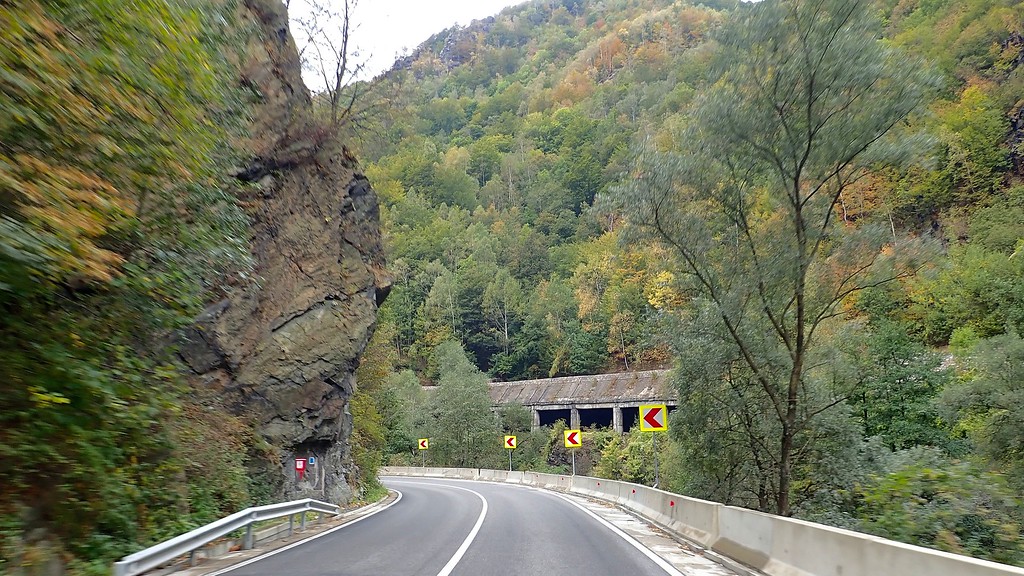 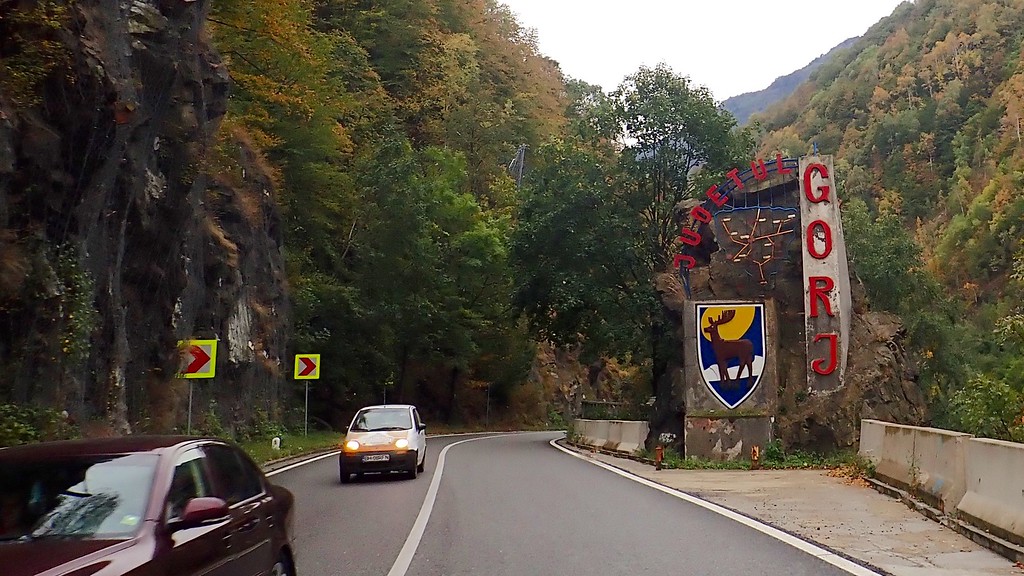 I thought that we were done with the hills when we reached the city of Petroșani. This was the first outpost of “civilization” that we reached since leaving Sebeș and it seemed like a good place to stock up. I had ensured that tonight we’d be somewhere quiet (no traffic, no weddings) and that we’d have access to a kitchen, since there was no where nearby to eat out. When I spied the sign for “Kaufland”, a well-known grocery chain I knew this was the place. They would have everything we need.

Think I can fit this on the bike? 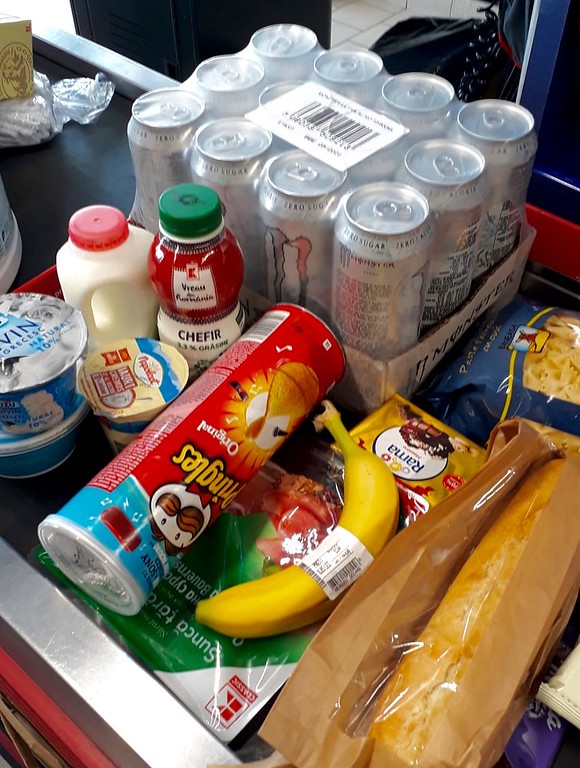 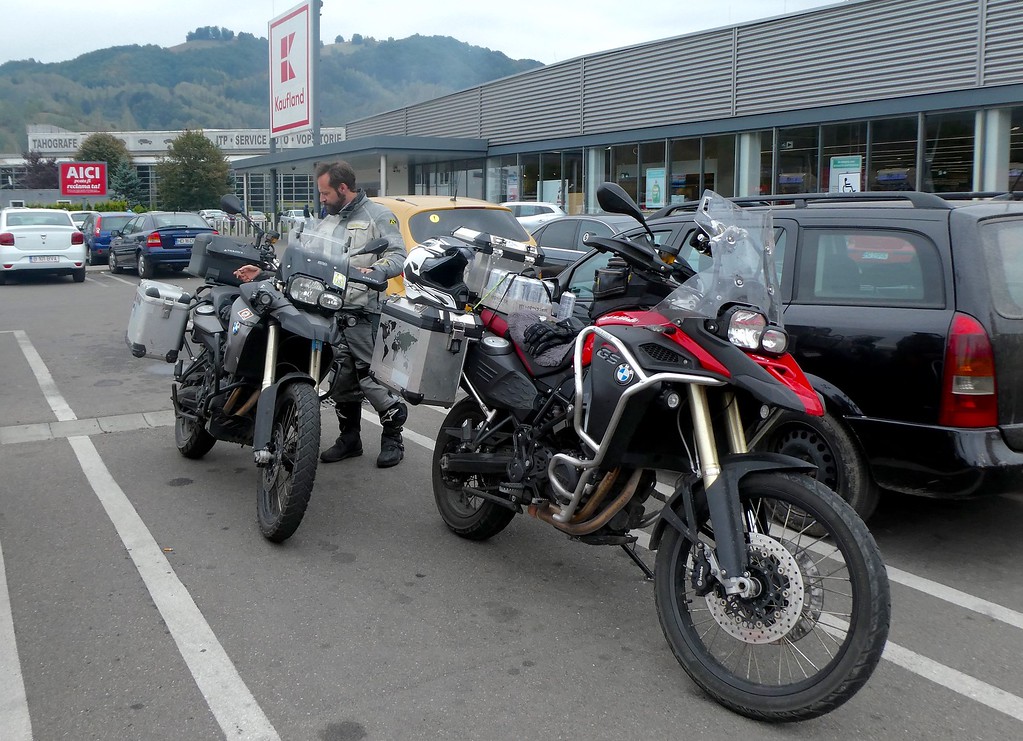 With the bikes loaded we got back on the road and found – more hills! What a pleasant surprise. Unfortunately there was also a lot of traffic now but at least I had things to look at while I sat the behind trucks.

We had entered a big green block on my GPS, known in the real world as Defileul Jiului National Park. It was a pleasant ride through the park, although unlike the National Parks I am used to, I didn’t see any evidence of hiking trails or other outdoor activities. Just trees – lots and lots of trees. I was ok with this.

I had noticed throughout the trip so far that the seasonal changes were starting to take place. Some places were more obvious than others, but autumn was coming. The slight variety of colors on the hillsides added another dimension of interest to the view. 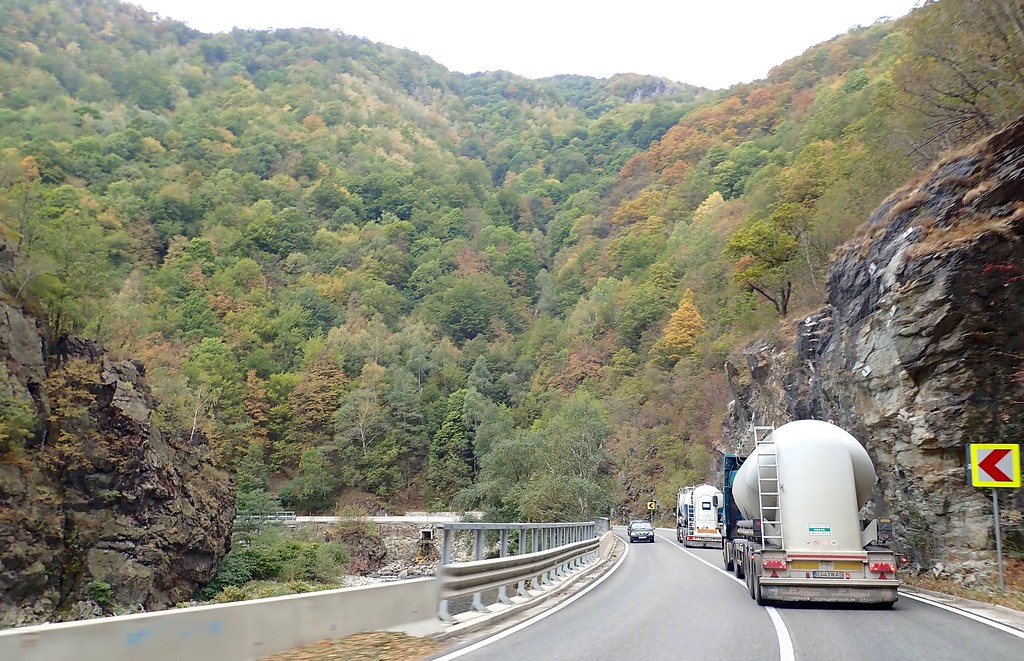 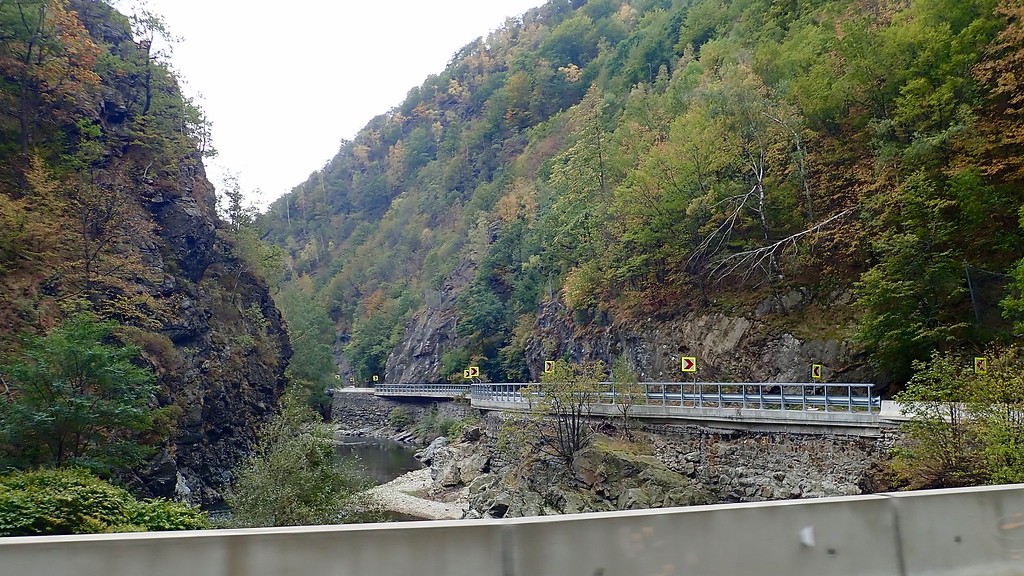 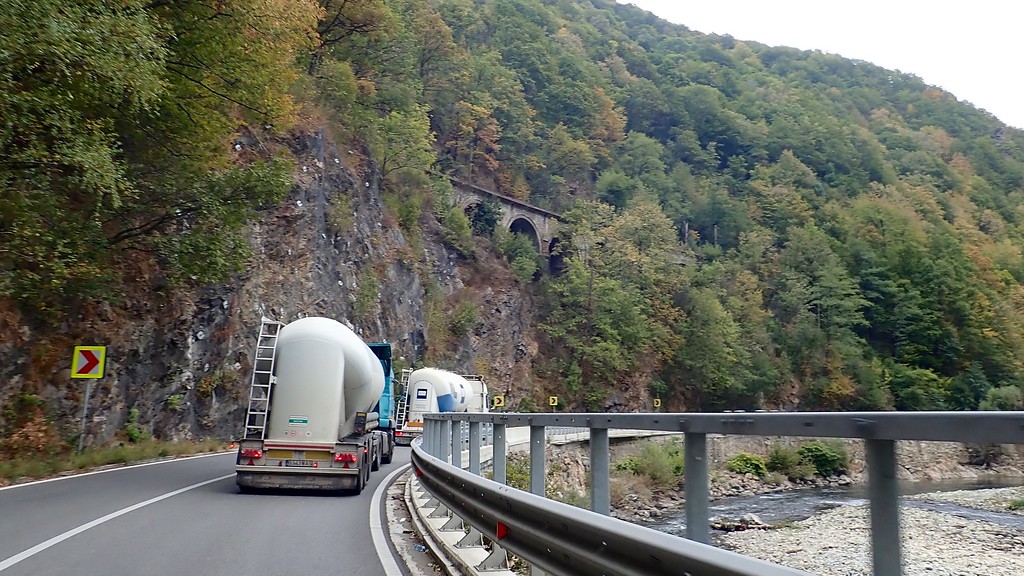 Are we out of the mountains yet? 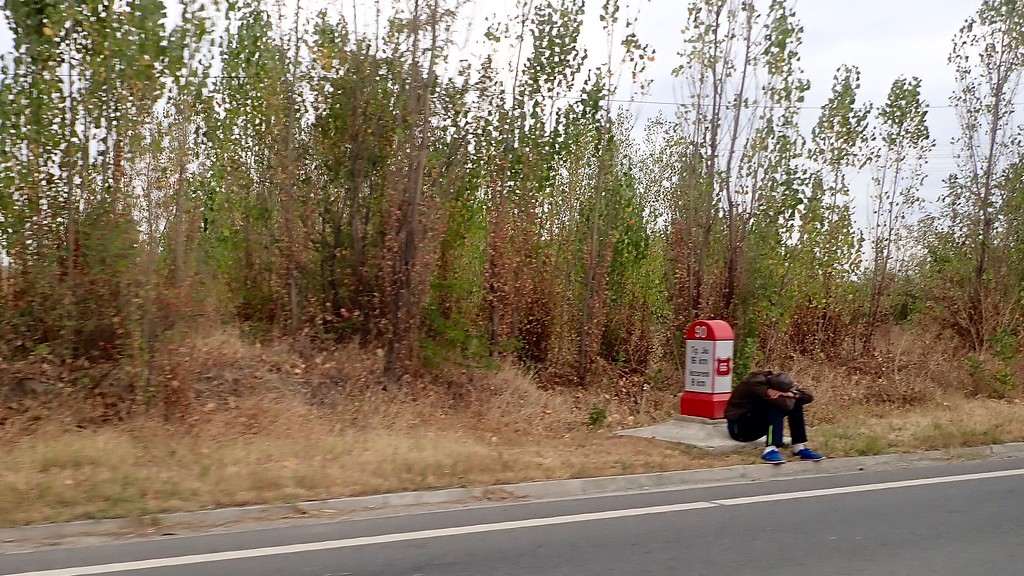 We were out of the mountains for the day. They hovered to the north of us, but we would stay on the more open plains while we finished our route. We skirted around the town of Târgu Jiu and then veered abruptly back towards the mountains, but never quite reaching them.

Our BnB was in the tiny village of Runcu, population 5,311. The hostess was very welcoming and immediately showed us to our room. We were surrounded by pastures and vineyards – could it be any more peaceful? 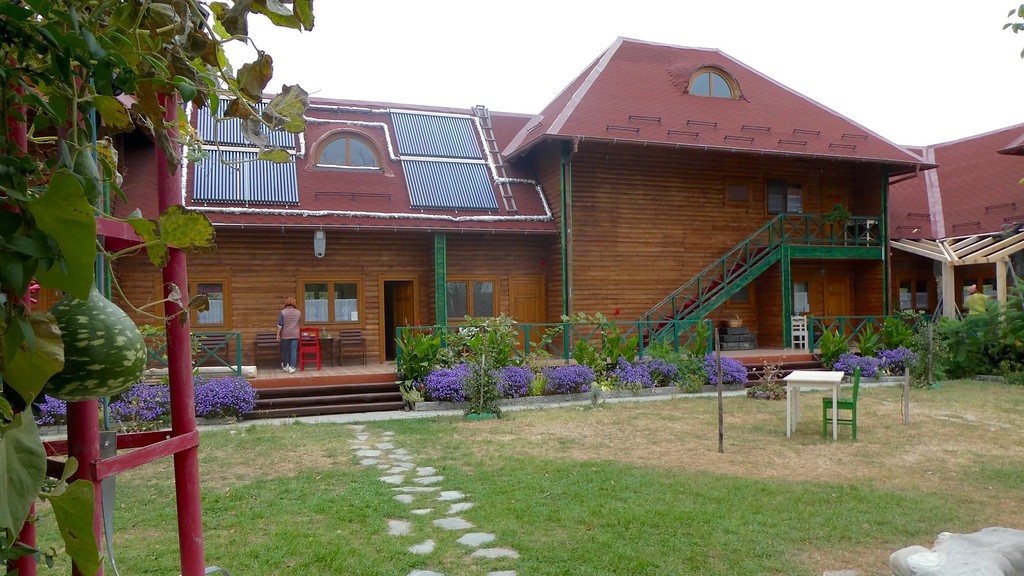 Outdoor grilling station – to the extreme

Our hostess was eager to make us feel at home, showing us the kitchen and the grounds. She started to rattle off a list of things to see and do in the region, clearly thrilled with where she lives and wanting to share it with everyone she could. And apparently she does: while her AirBnB listing was new, she clearly has an established name for herself with the community. While we were there, a group of builders were extending the roof over the porch. The whole establishment was fairly new, and the assistance of the EU was evident: almost every appliance and large piece of furniture had a sticker on it, proudly stating that it was possible through funding from the European Union. 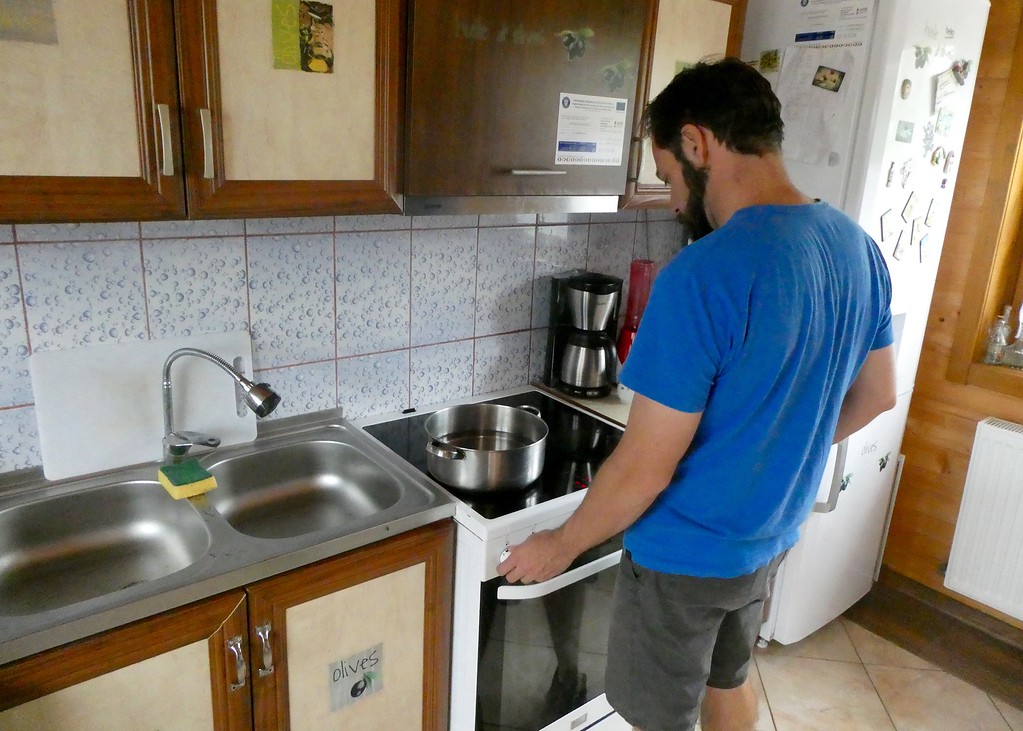 While Dan made dinner, I wandered the grounds and looked around. I also went to the bike to check on it. When we were in Mediaș I had noticed that one of the bolts holding my GPS mount had disappeared. I tried a bit of low-tech jury rigging that consisted of toothpicks and tape. But now I could see that the toothpicks did not work and sought another solution: a nail. I figured that if I could figure out how to keep it in place, it would do the trick. Time will tell!