Our night on the banks of the Danube was a comfortable and relaxing one. We packed up quietly in the morning and left after a brief thank you and “Auf Wiedersehen” to our hosts.

Serbia. What we had seen so far was interesting, but not amazing. The weather continued to be grey and damp, and the roads led us across farmland and fields.

Some things don’t change just because a river was crossed 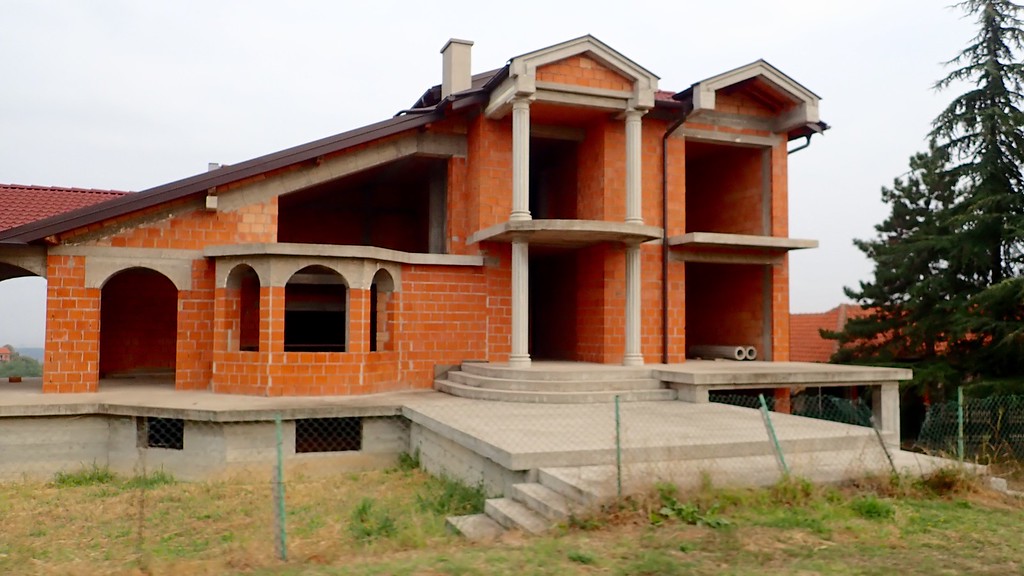 About half an hour into our morning ride I got a quite the wake-up call: I had noticed a sign warning that there was construction ahead, so when I rounded a gentle corner, I wasn’t terribly surprised to see a vehicle stopped in front of me. I also stopped, as did Dan. But then suddenly in my mirror was a car speeding up behind me. Before I knew it, the car was stopped next to me, close enough that I was waiting for the “thud” on my pannier from his bumper. I looked over, even with his rear passenger window, but the driver never even acknowledged that I was there. And when the construction light turned green again, I waved him ahead, as I would rather be able to keep my eye on him than to have him behind me again. My heart had skipped a beat, although from Dan’s perspective, it “really wasn’t that close”. Whatever…

The road to Belgrade was fast, and it wasn’t long before the city grew large on the horizon. We’d stay well out of the city itself, instead following the motorway that gave the city a wide berth. Our hostess in Romania was excited for us to visit Belgrade, naming museums and other attractions that would be of interest. As much as we would like to visit, it is our rule to avoid “big cities” on our motorcycle trips. The idea of threading our way through traffic and pedestrians and one-way roads was the least appealing thing we could imagine. Add to that the amount of time that a trip to the city would entail and it was just something that we could not afford to indulge in. We would save “city visits” for another time.

Belgrade in the distance 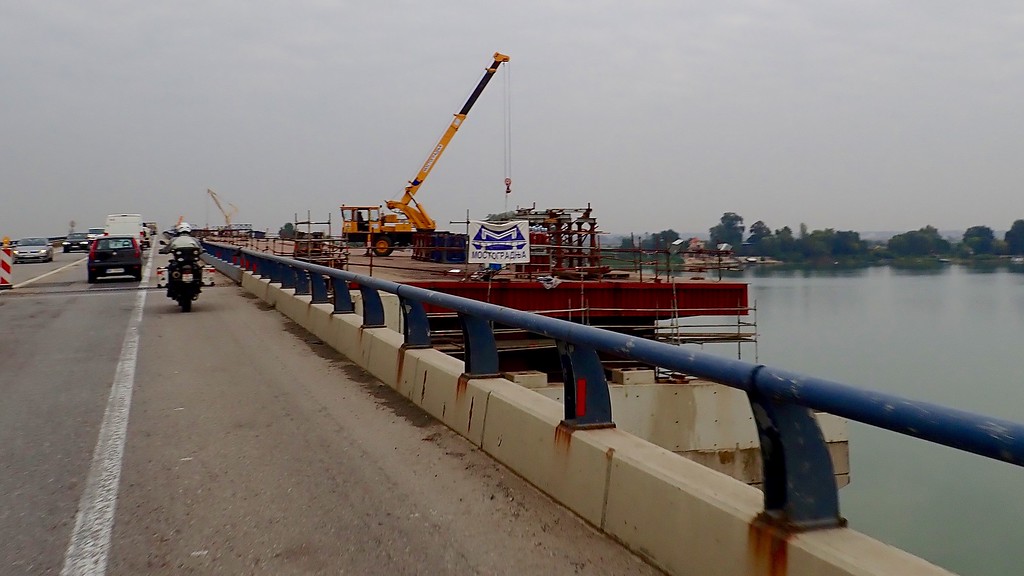 Leaving behind the city

And leaving behind the motorway 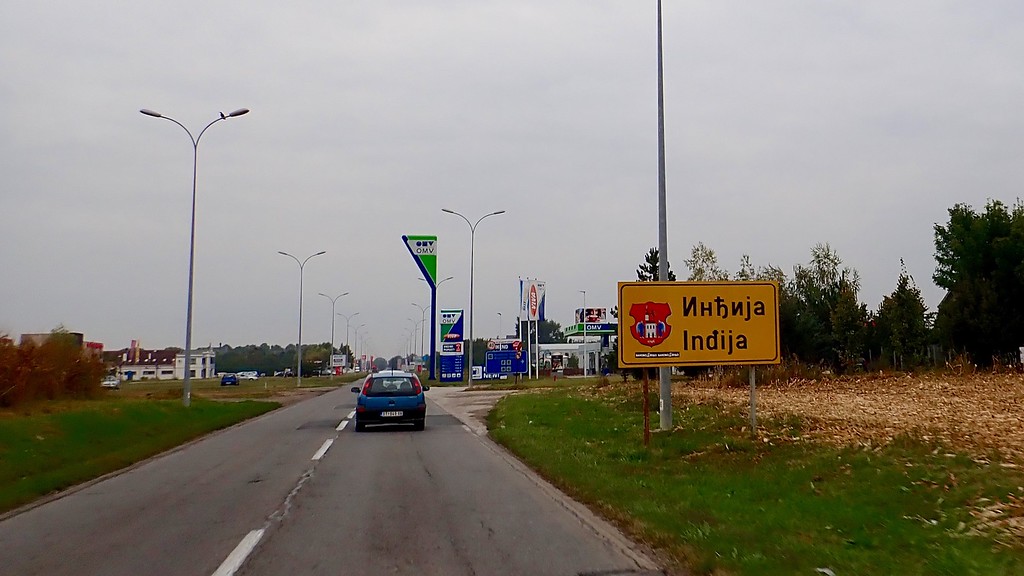 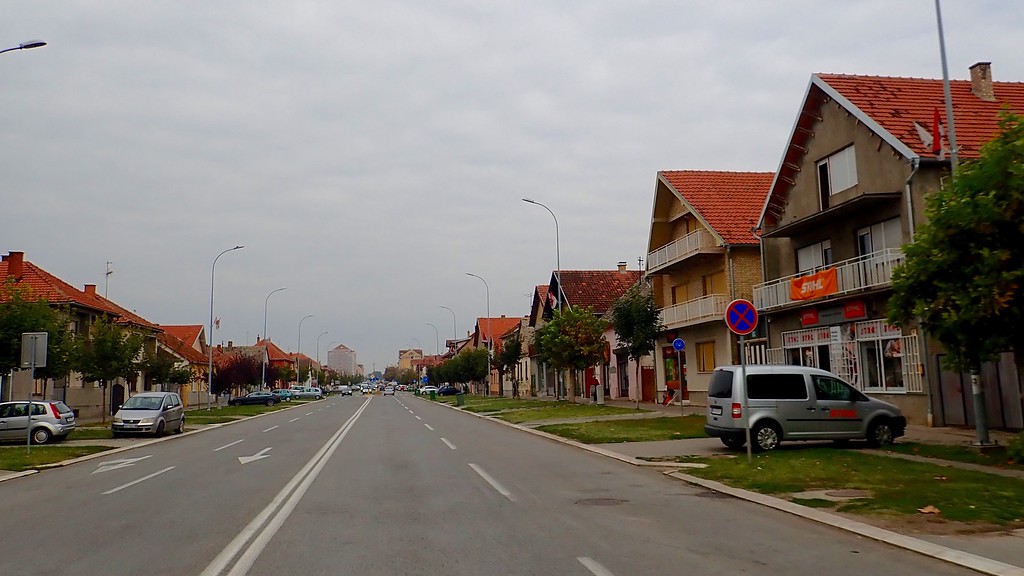 Tell me again why motorcycle tires are round?

Western Serbia was flat. The landscape rolled by and we observed…not much. It is amazing how much land there is in this world. Most of what we saw was under cultivation, although at this time of year, that didn’t make for much color or interest. I would say that one of the most notable things that I saw was a fox – a live one. It skittered across the road, frightfully thin, but at least it was still alive.

Shortly after the fox sighting we arrived at Novi Sad, one of the larger cities that we have encountered so far. It was a straight road in and traffic was pretty light – not like the chaos of the border town of Oradea back in Romania. Thank goodness.

Life in the big city

In the middle of Novi Sad the GPS took us down tree-lined streets and then a sudden left turn. A few blocks later we saw the reason for the turn: we were near the Serbian border. Trucks had lined up to cross the Sava River – and into Croatia! – and were backed up into Novi Sad. This didn’t seem to stop the usual traffic from trying to get by, however – including us.

So many trucks line up at border crossings… 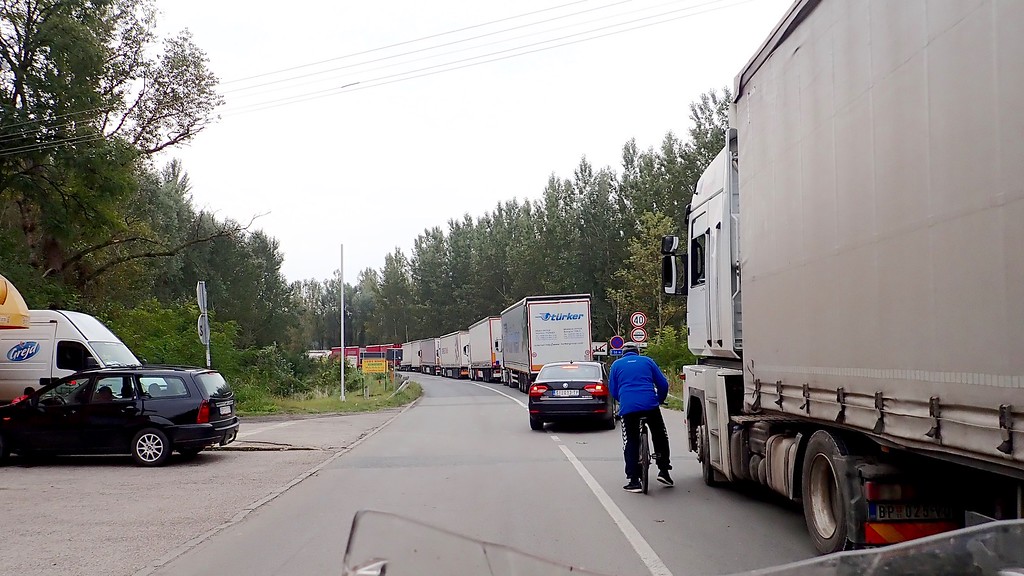 The crossing into Croatia was fast and uninteresting. We were back in the Schengen Zone and only a cursory look at my passport was required. We were once again flying along country roads, with very little visible change in the landscape since passing into a new country. The manmade items, however, were slightly more interesting in the little towns we passed through. 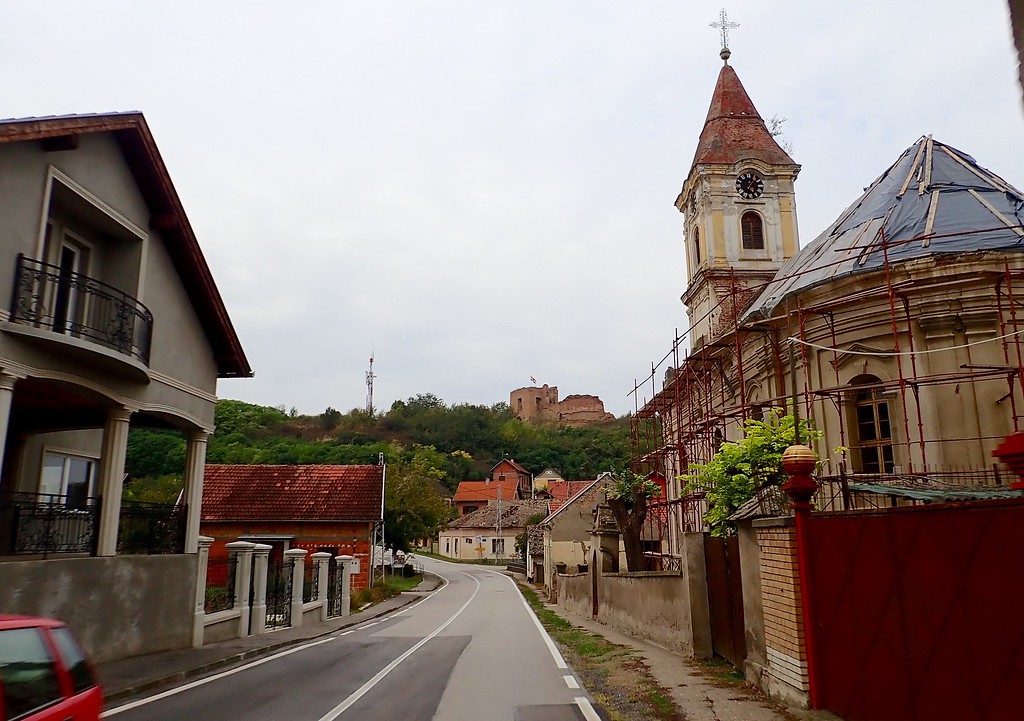 Mysterious activities at the side of the road

Hay animals in the center of town 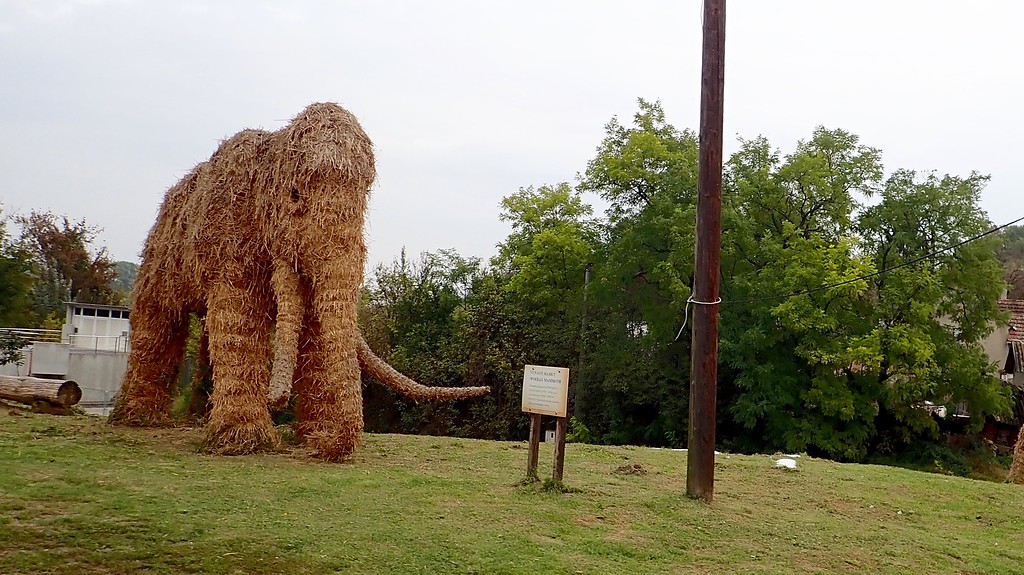 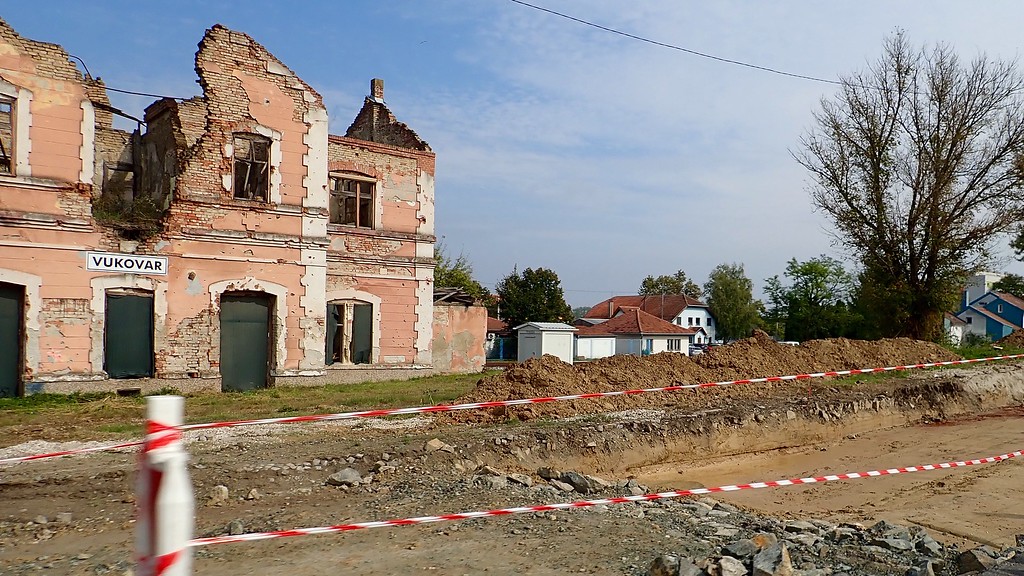 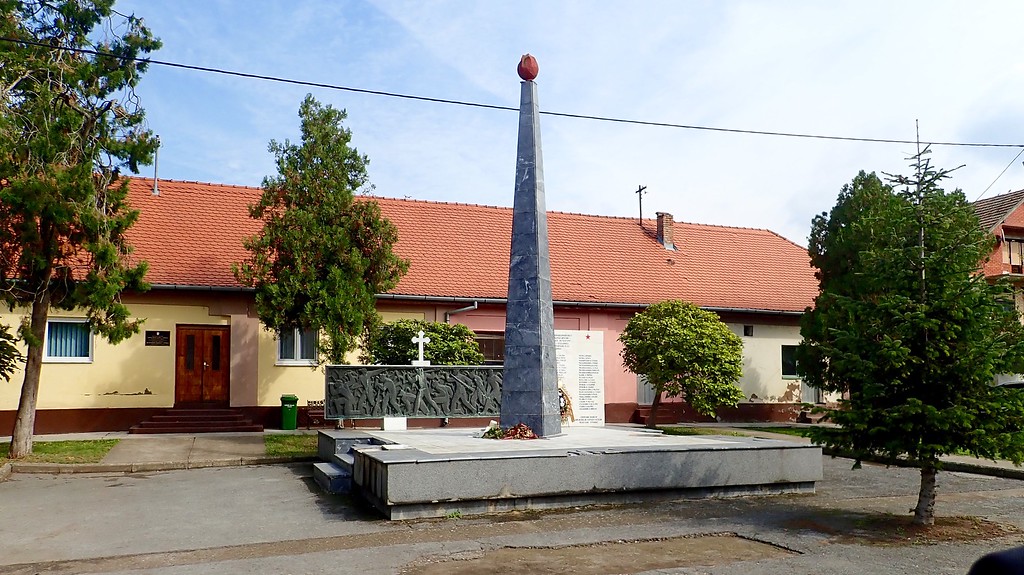 Every house has their own driveway/bridge

At one point the road wound through some small hills and villages. At a bend at the bottom of one of these hills we came upon a recent accident. Unless the clean-up crew was fast, it also appeared to be a single vehicle accident, and the single vehicle was a motorcycle. But not just any motorcycle, but a police motorcycle. Oops. I didn’t take any photos since I was 1) navigating around the emergency vehicles and 2) feeling more than a little self-conscious about riding by with a camera in my hand. The amount of grass lodged in the bike’s fairing made me think that someone took the corner too fast and low-sided in the ditch. Again: oops! 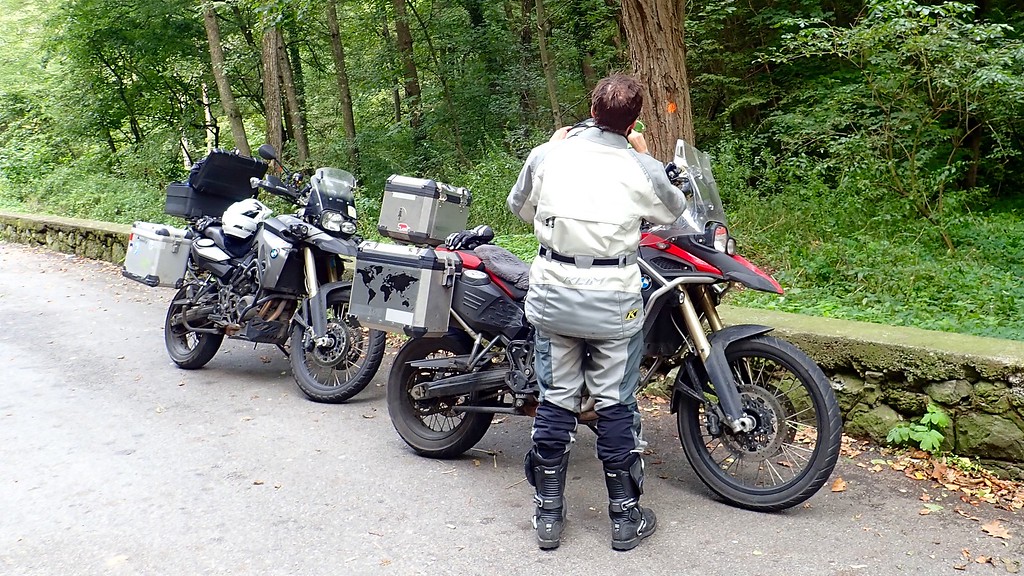 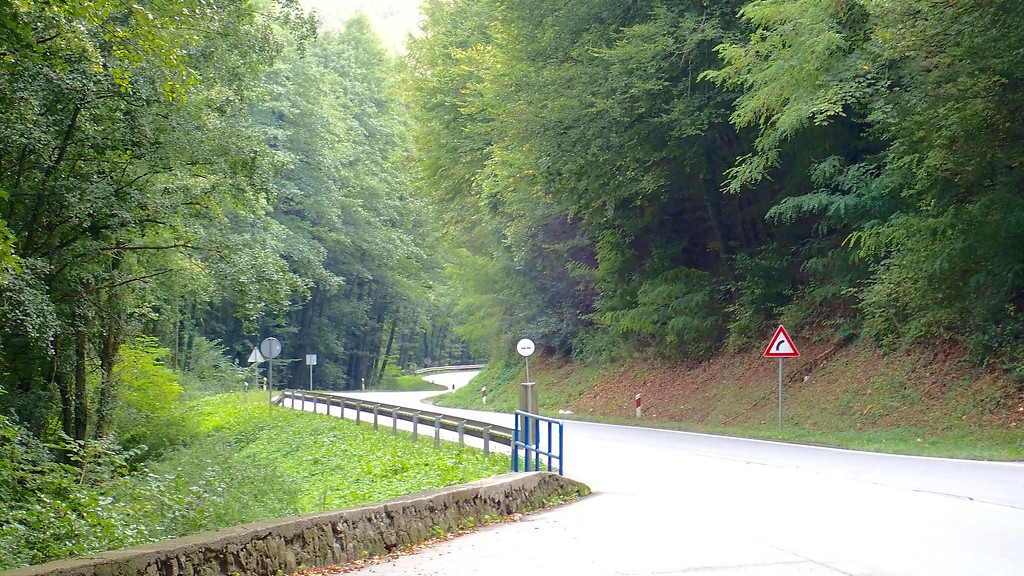 Leaving the forest behind and back into an agricultural landscape 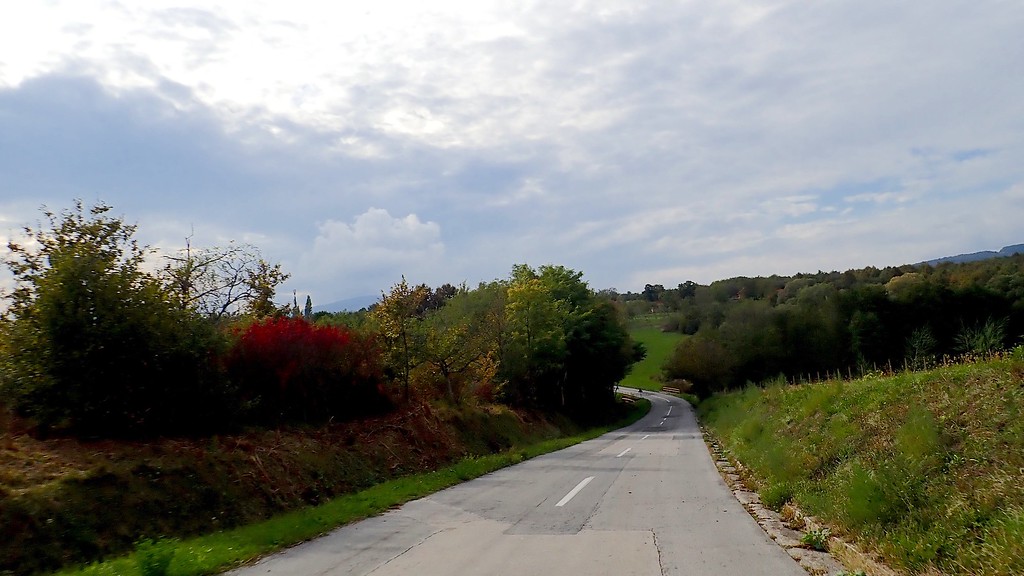 The scenery was becoming hillier and more pleasant to look at – and ride through. It also became more apparent that a war was fought here – the “Croatian War of Independence” as it is sometimes referred to, in 1991. It was a brutal war, and the link gives many details of who fought and why they fought. In short: “A majority of Croats wanted Croatia to leave Yugoslavia and become a sovereign country, while many ethnic Serbs living in Croatia, supported by Serbia, opposed the secession and wanted Serb-claimed lands to be in a common state with Serbia. Most Serbs sought a new Serb state within a Yugoslav federation, including areas of Croatia and Bosnia and Herzegovina with ethnic Serb majorities or significant minorities, and attempted to conquer as much of Croatia as possible.”

The above led to four years of bloodshed, and thousands of people kicked out of their homes and forcibly moved elsewhere. At first I had no idea that we had entered the cradle of this conflict, but with the repeated sight of pock-marked walls and ruined homes, it soon because quite obvious. One of the most intriguing signs of one of the effects of the war was when the GPS kept showing me “grey boxes” that indicated buildings alongside the road, but no buildings were visible. The buildings had been either destroyed in the conflict, or dismantled afterwards by people who still lived here as they salvaged materials to rebuild their own homes.

It was in a slight drizzle that we pulled into the town of Pakrac, where the Hotel Pakrac awaited us. The woman at the reception was friendly and welcoming, giving us our room key and instructions on where we could park our bikes. After putting our stuff in our room and changing into something more comfortable, we took a walk in town to see just where we had ended up.

I had chosen Pakrac based purely because of where it was on the map: a decent day of riding, a location with reasonable room and food options, and still kept us on our steady course for home. What I didn’t realize was that Pakrac was considered the cradle of the Croatian-Serbian conflict. While no blood was officially shed, plenty of shots had been fired. Based on the condition of the buildings that we saw that day, the economy hadn’t quite recovered – although there were some small signs of progress to be seen. 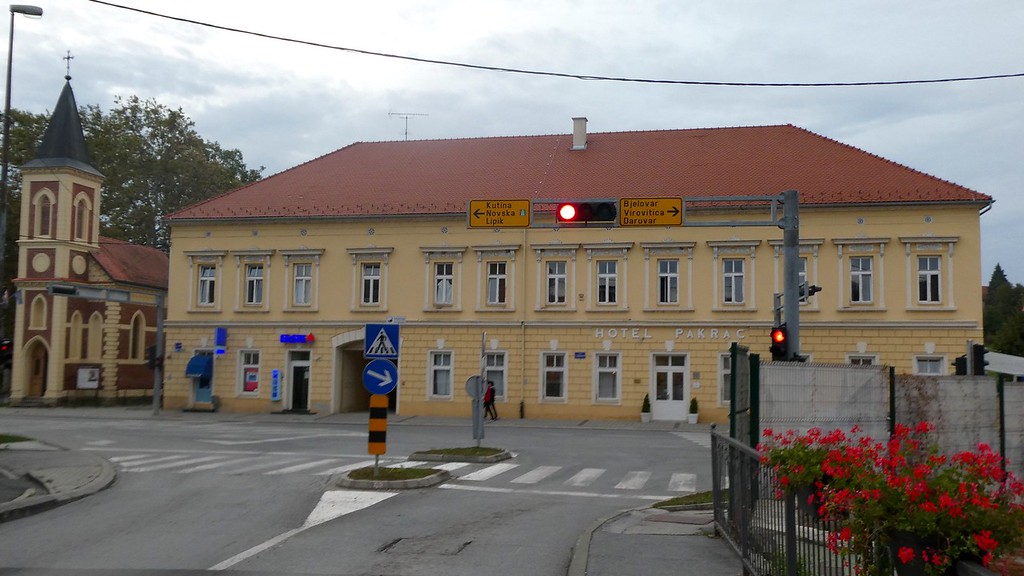 Across the street from our hotel 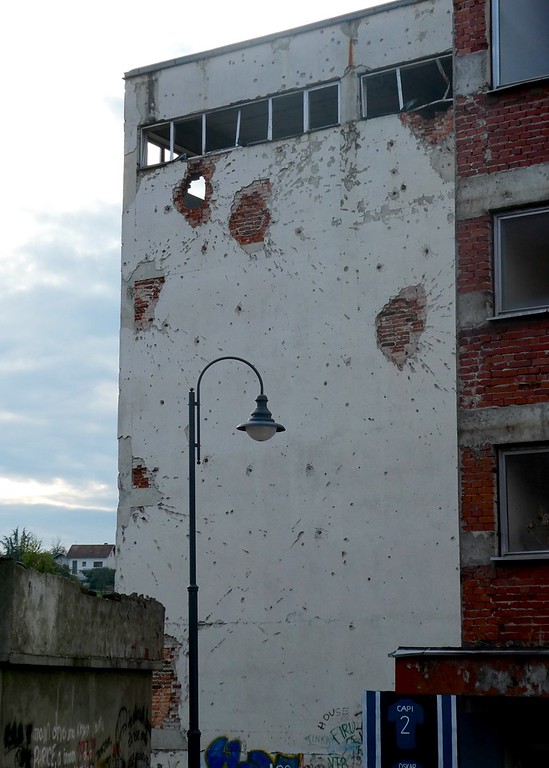 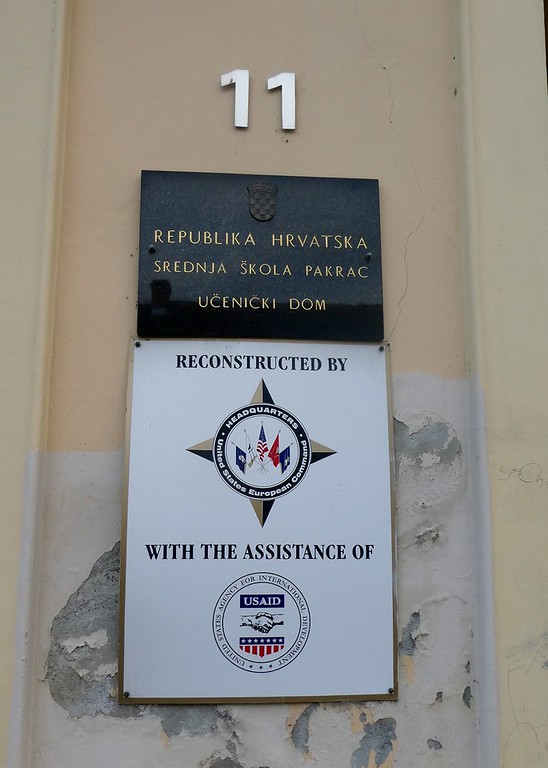 Front of the church

A restored Catholic church around the corner

It was fascinating to walk around the town and see the evidence of the war. I mean, in my mind, wars happened hundreds of years ago. When I walk through the medieval center of a European city and look at the city walls built for defense, THOSE are the wars that I think of. But here I was, in the midst of a town that had been at war within my own lifetime. I tried to imagined my city and what it would take for Basel to raise arms against another canton – and I couldn’t do it. I just don’t understand how something like this happens.

Once I was home I found this site that commemorated the fall of Vukovar 28 years ago. The page has some disturbing images on it, but it really gives you a sense of just what a devastating war it was.

Our options for dinner were limited. Pakrac is not a big place, and our lack of knowledge of the area meant that we were reliant on Dan’s phone for suggestions. It suggested the Tessari Pizza parlor – why not? Pizza is good just about anywhere. Unfortunately, I had planned poorly for this portion of the trip: I hadn’t taken into consideration what currencies the various countries accepted, and we were now in a country that didn’t take Euros, but still had their own kuna in circulation. I had left our kunas at home, and now all we had were Euros, Hungarian forints, Romanian leu and Swiss Francs. As Dan and I prepared to place our order, I spoke to our waitress (thank goodness that the German language is so common in Croatia!) and explained our predicament. She reluctantly agree to take Euros as payment, and when we were ready to pay she gave us the total Euros owed in a most apologetic way. But Dan and I were more than happy with the cost and exchange rate and left with contented bellies.

“Restored” versus “Not restored”

A couple of women gossiping in the rain

Pakrac is actually quite small and after dinner we made our way back to the hotel, as there wasn’t much else for us to see. Besides, I still had to plan out what we would do tomorrow!

Our beds were comfortable (the only room they had for us had separate beds) and it was blissfully quiet. Our room faced the back of the hotel and the sound of a steady rain lulled me to sleep.