Today was our last full day in Cape Town. I had slept very well: the ear plugs kept out any disturbances. This turned out to be a good idea because according to Dan, there was some sort of fight in the market square in the middle of the night. Ah, ignorance is bliss!

While we had intended to visit Table Mountain at some point during this trip, every day was the same story: the cable car was closed due to high winds. I asked Dan if he wanted to hike to the top, as there were a few different trails to get there. Much to my surprise, he said “no” to this adventure, so we decided to see another of Cape Town’s famous sites: Kirstenbosch Gardens.

The City Sightseeing tour bus company offered various hop on / off off routes and we signed up for the one that would take us to the gardens. The drive there was quick and I was pleased to see that it was a bit overcast – no hot sun to bake me this morning!

There weren’t that many people who got off the bus with us and the process to buy our tickets was quick. We passed through the gates and were greeted by a nice area surrounded by shops, galleries, ancient bonsai trees – and a Dan!

Artwork in the gardens 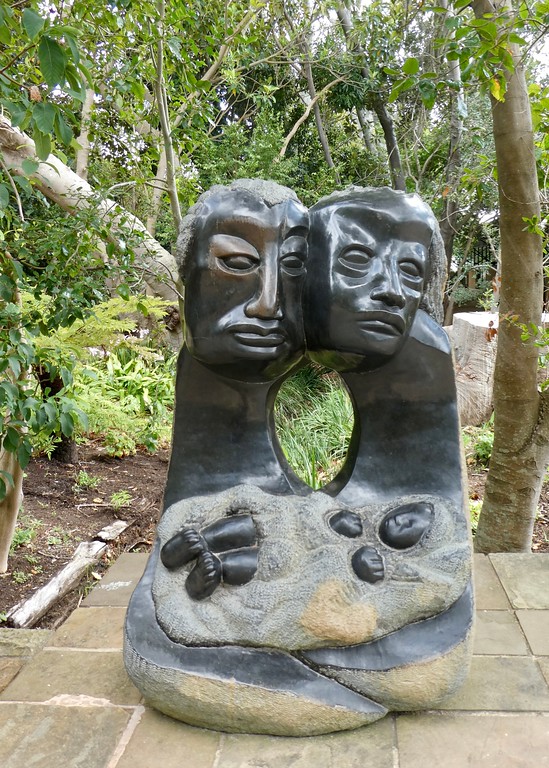 While looking up information on Kirstenbosch I ran across a news article from the previous day. The day before, someone had spotted a Caracal moving one of her kittens across the garden lawn! I kept an eye out the entire time, hoping to see her. Sadly, I had no luck with the kitty cat sighting.

Photo from the internet – Caracal momma! 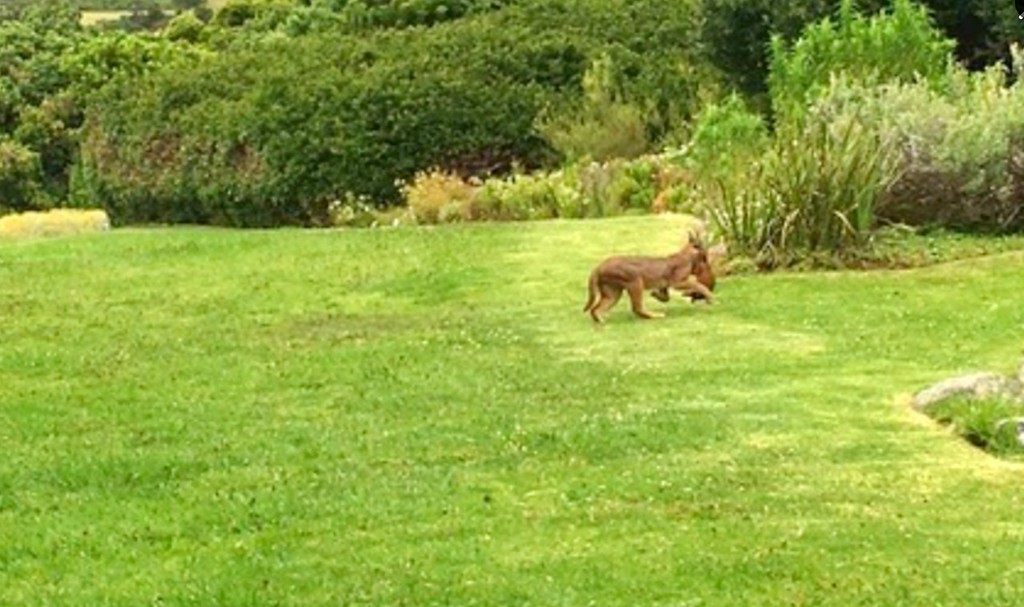 What a great day for a walk

We had seen a sign at the garden gate that there free guided walks offered in the garden. Excellent! Although we had just missed the one that was due to start at the gate we had entered, there was another tour that would start shortly from another of the gates. We headed in that direction; we didn’t have to rush, but we didn’t dally.

I dallied long enough for some photos though!

We reached the gate and found the meeting point, watching as others joined us, standing around awkwardly as we waited for our guide to show up. 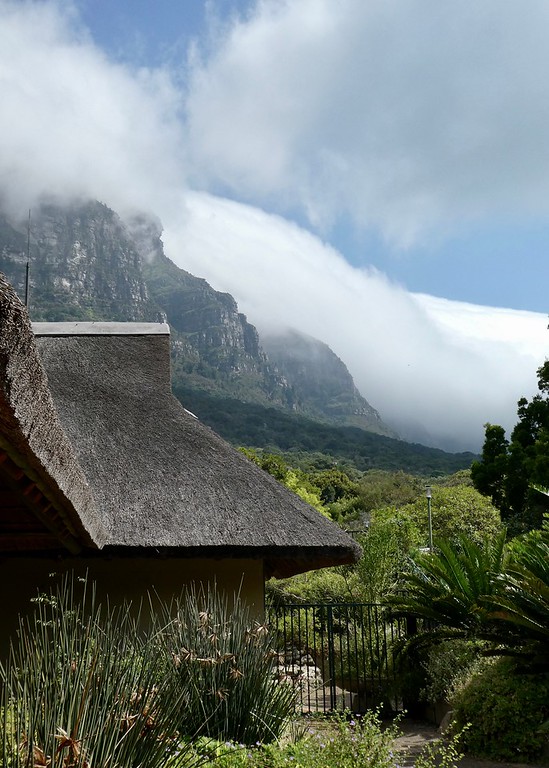 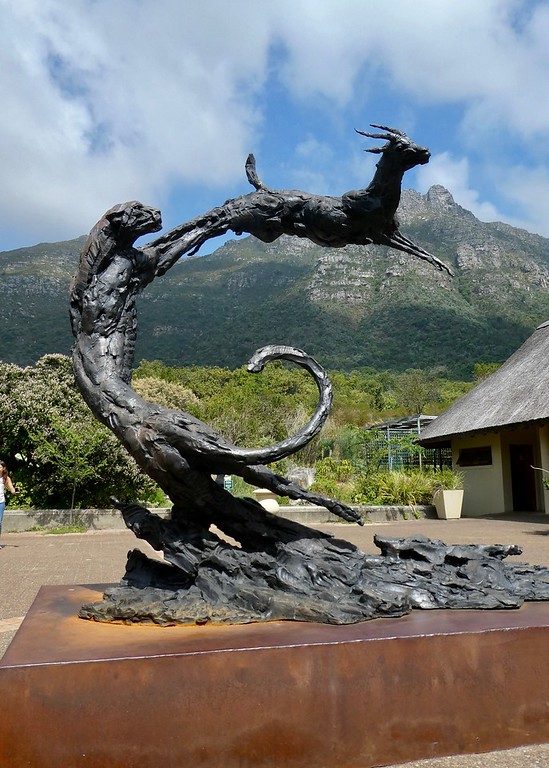 Our guide showed up, introduced herself, and gave us a quick overview of the upcoming tour. She was an engaging person and immediately started to tell us about the plants around us. She went into great detail about the history of the fynbos, how the main genus “Erica” was named, what characteristics they have and other taxonomic information.

Our guide in the big sunglasses 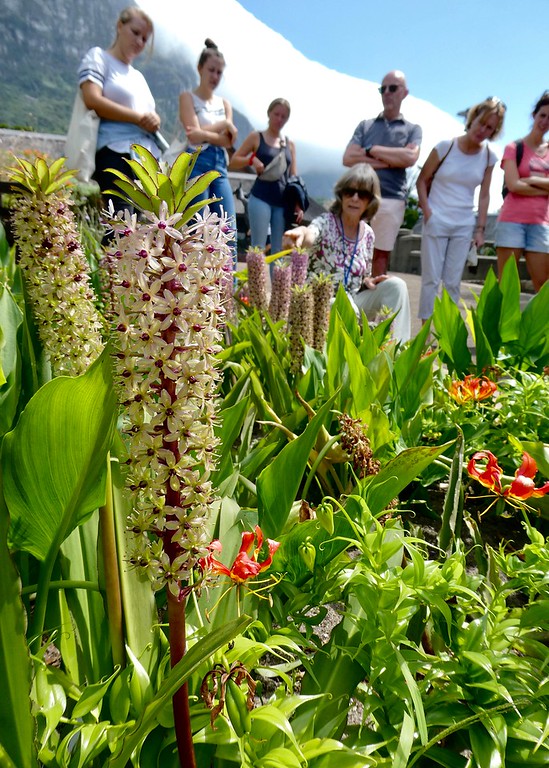 One of the stories that she told us was how the early Dutch had planted oak trees in the area so as to be able to provide building wood for the busy port. Unfortunately for the Dutch, they didn’t take into consideration the relatively mild winters in this region. Without the harsh seasonal temperature fluctuations, the rings that give an oak its strength didn’t form properly. In addition, the hot and dry summers make the tree susceptible to insects and rot. The oak had become a weak tree, hollow in the middle and liable to fall over in a strong breeze. 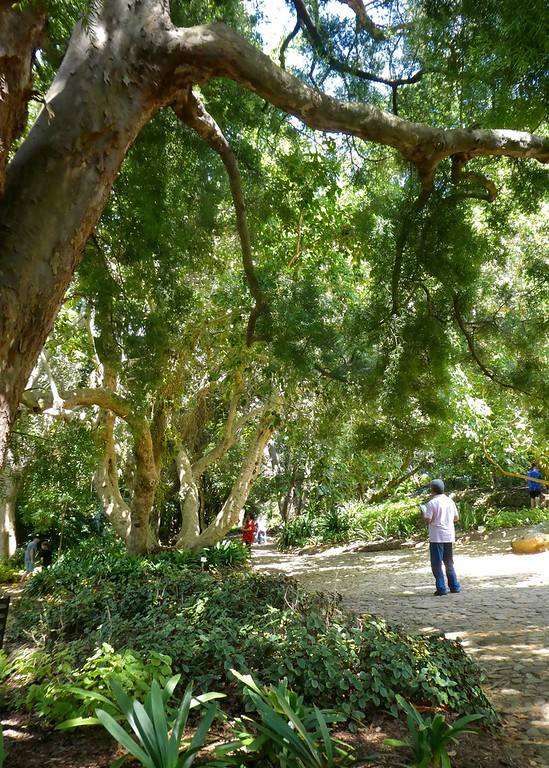 Because of the way the wind comes off the ocean and hits the Table Mountain range, clouds form and flow over the edge like a waterfall (<- random video from the internet). This then creates a steady amount of precipitation that clings to the vegetation and eventually seeps into the ground, creating crystal-clear streams further down the mountainside. I filled up my water bottle from this spring, and I can tell you, it was really good! Colonel Bird’s Bath: a little pond to collect the naturally-flowing water from the mountain

Learning about the ancient Cycads

The Cycads have survived from the time of the dinosaurs, and have become a rare and threatened species. In fact, twenty-four of them were stolen from the very gardens we were in. I didn’t think that they looked very special, but everyone has their own sense of what is “valuable”.

Plants that lived with the dinosaurs 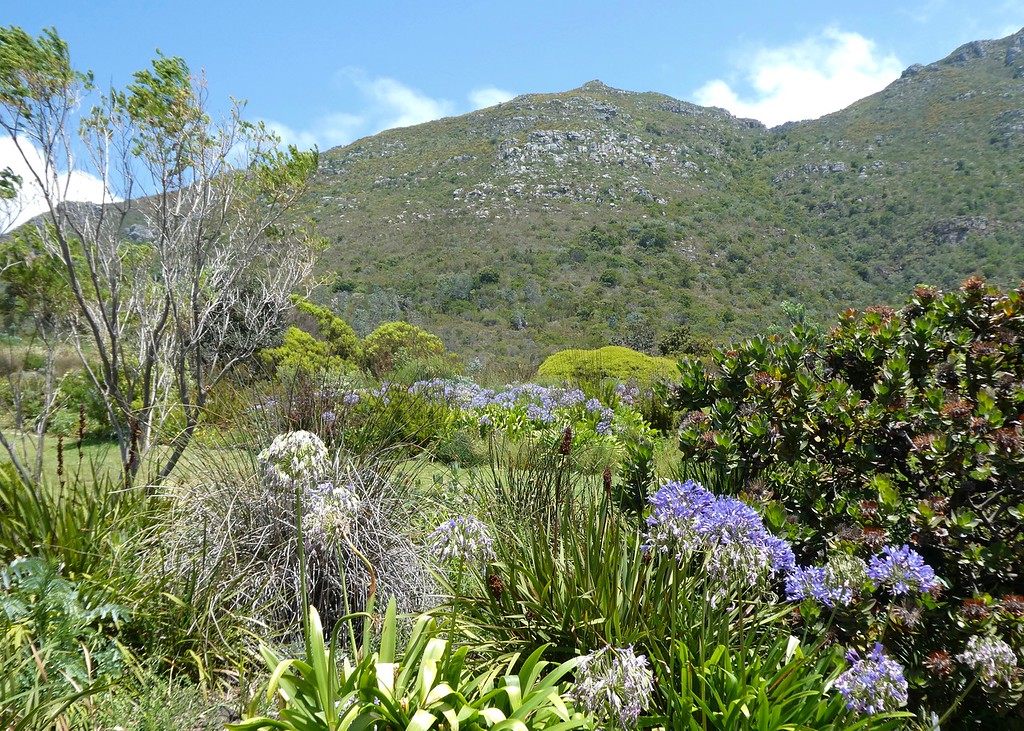 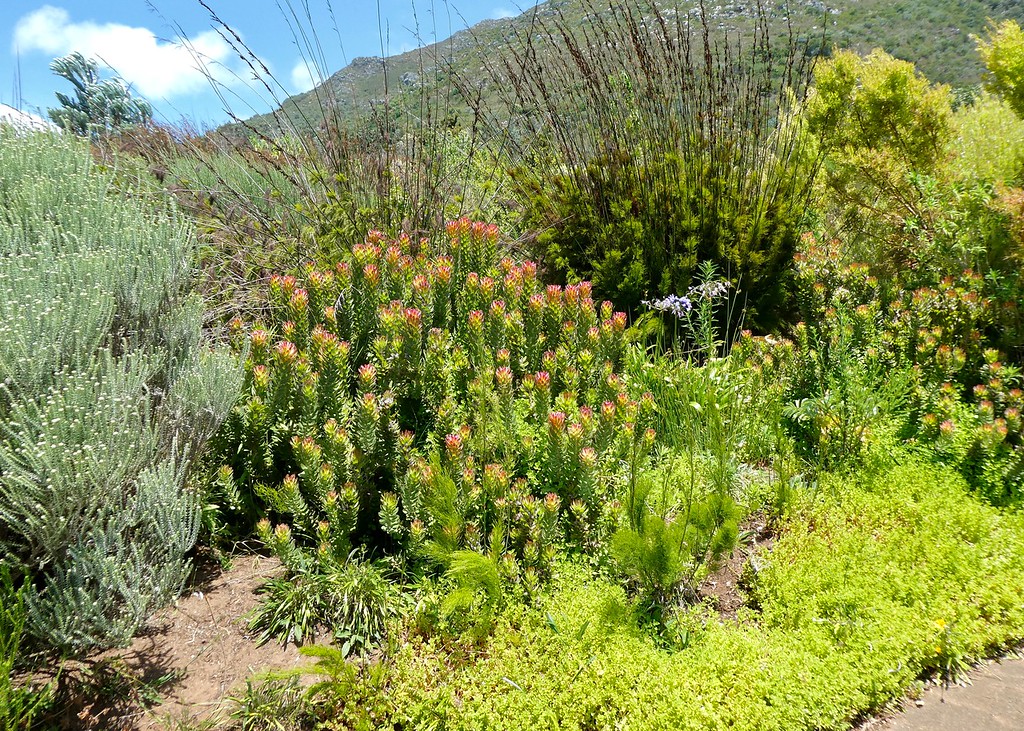 The view towards Cape Town from Kirstenbosch

Cool bark of the Silvertree 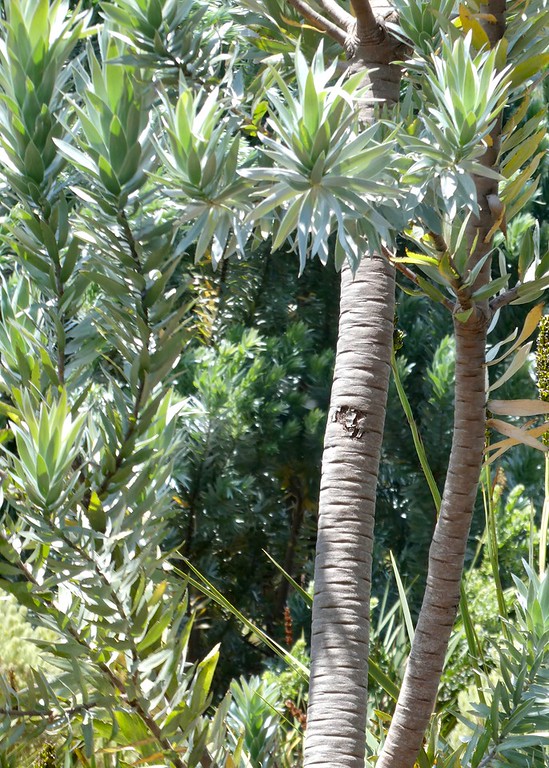 A couple of the amazing flowers from the region: 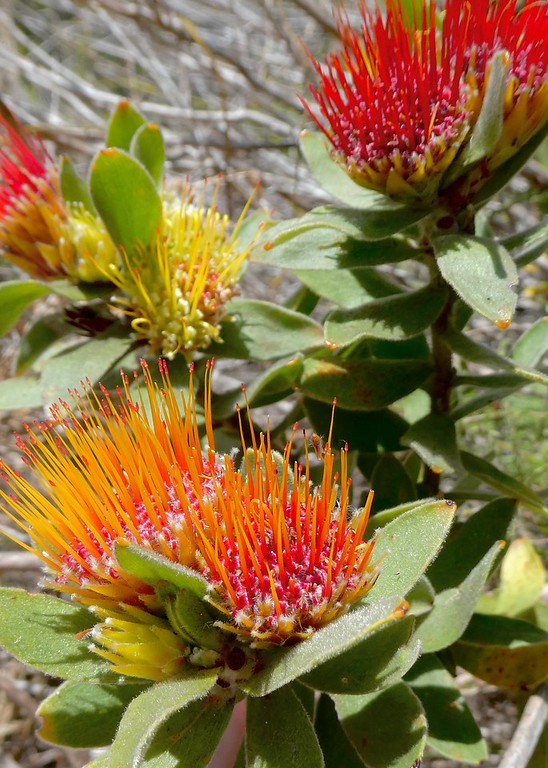 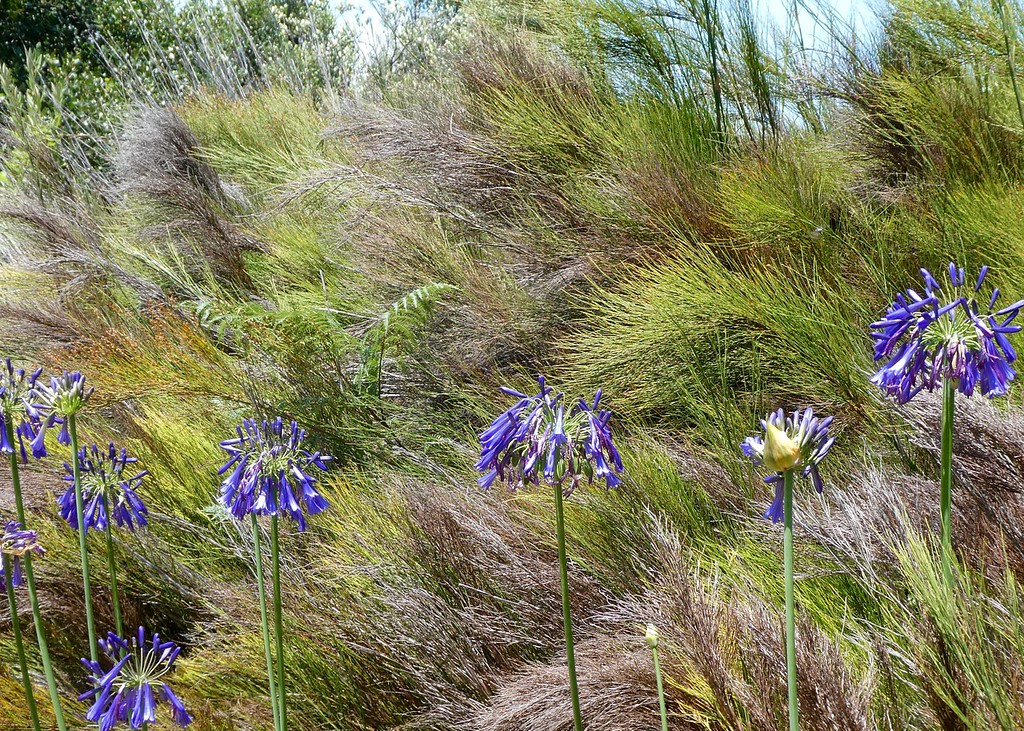 Enjoying the canopy walkway above the tree tops

African Milk Plant: I’m used to seeing these as a 2′ tall house plant (Dan for scale) 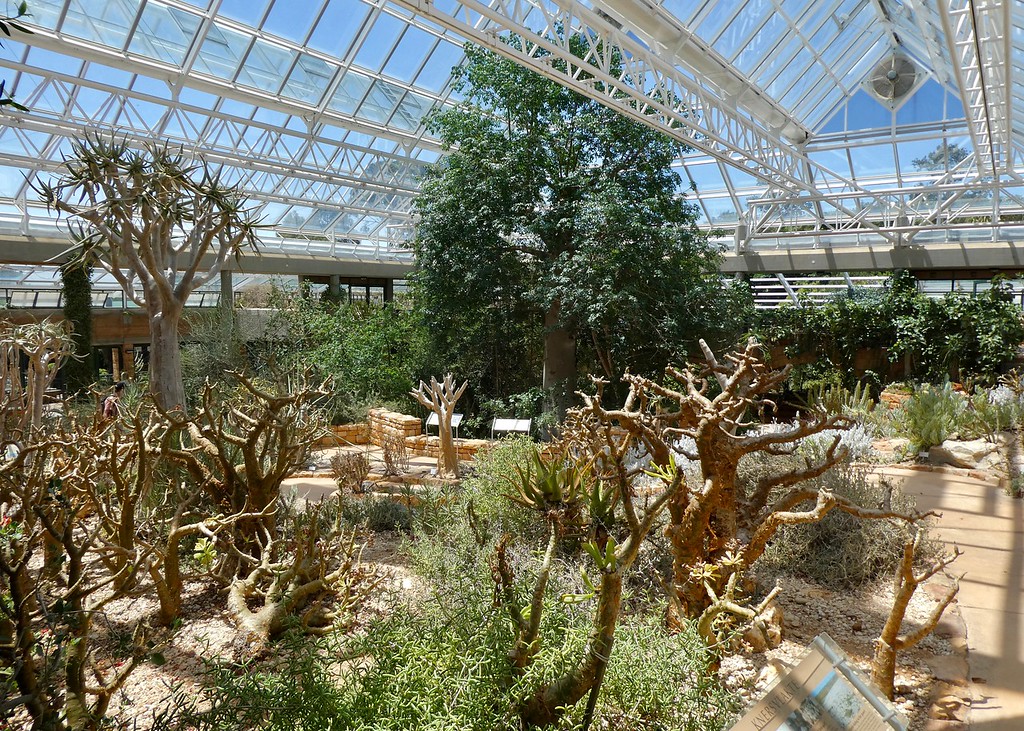 We had explored the gardens as much as we wanted and made our way back to the gate to catch the next Sightseeing Bus. Our ticket (and the bus’s route) would take us around the peninsula before reaching Cape Town again. The bus passed through some lovely countryside on the “back side” of Table Mountain, and got off at one of the planned stops at Hout Bay for a quick bite of lunch. 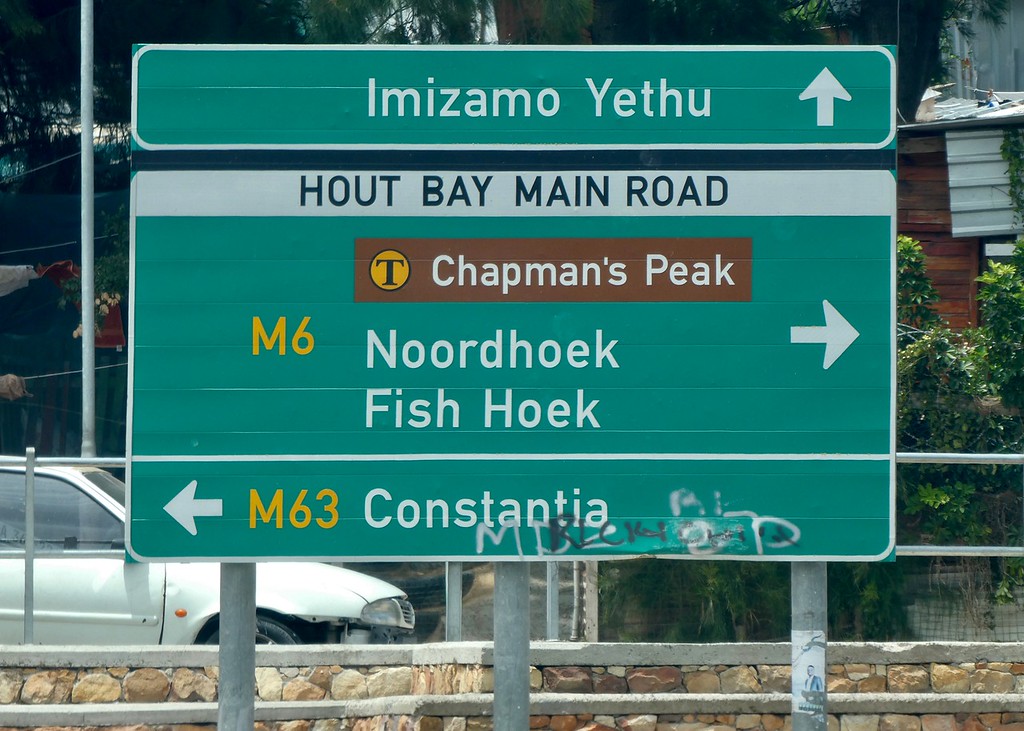 The “informal settlement” of Imizamo Yethu

The marina at Hout Bay

We followed the others that got off the bus at this stop to the “Mariner’s Wharf Harbourfront Emporium“, which turned out to be a touristy fish ‘n chips joint, and it wasn’t half bad. While we ate, I watched the guys operate a bulldozer on the beach, as they tried to move the wind-blown sand from the parking lot back onto the beach. And the seagulls were entertaining as they did their best to snatch up the fries that kids tossed into the air. I’m sure that there was more to see of this town, but our limited exposure was less-than-interesting. Perhaps if we had taken more time, and a light rain hadn’t started, we would have found something more interesting in our explorations.

We caught the next bus to continue our loop back to our hotel. We passed through some more small waterfront towns and saw beautiful shorelines. The ocean was dark with low clouds and the wind continued to whip up the waves.

We got off the bus again a Camps Bay and it was completely different than what we had experienced the other day. The mountains had disappeared behind a layer of clouds and there were fewer people enjoying the day. 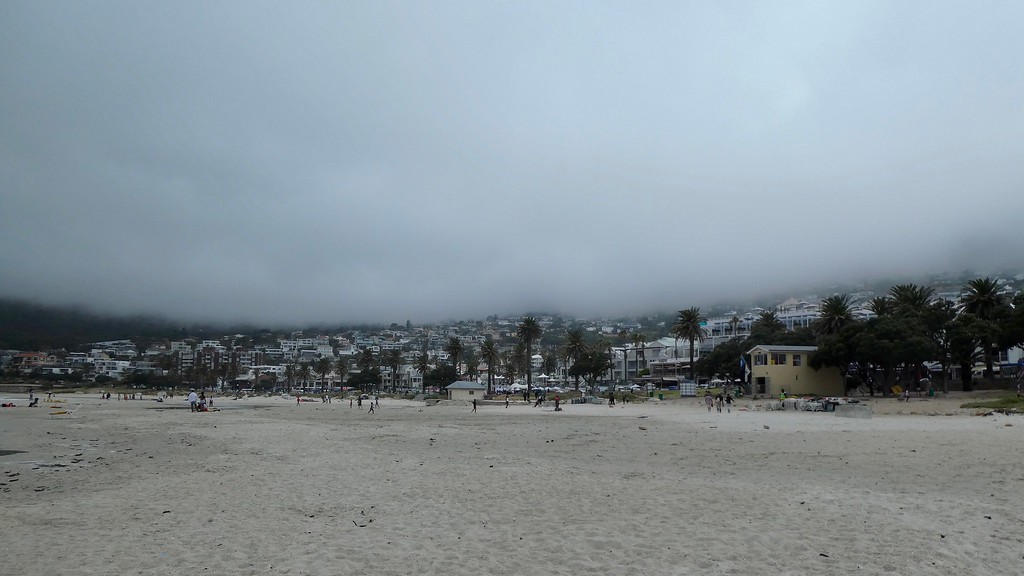 We didn’t stay long at all, since we planned on having dinner in Cape Town. Jonathan, one of the guys in our upcoming motorcycle tour, had contacted us and invited us to have dinner with him. I was looking forward to meeting him, seeing as we’d be spending the next two weeks together. He had made reservations for the three of us at an upscale restaurant (Aubergine) that was within walking distance from our hotel. The current rain eventually let up so that we could leave our umbrellas behind. Oh wait – we didn’t have any umbrellas! It was a good thing that the rain had stopped.

Dinner was fantastic and Jonathan was a very friendly and gregarious guy. We spent the rest of the evening getting to know each other, swapping stories as each course was brought to our table. At the end of the evening, we ordered a couple of Ubers to take us back to our hotels. It was dark and inadvisable to make the return walk to our hotel, and as Jonathan was staying near the waterfront, so he had even further to travel.

It was midnight before we were in bed. Tomorrow would be a big day: we’d leave Cape Town behind and start our tour of South Africa!