Much to my dismay, Prince Albert has mosquitos. And even worse, they were in our room. I had been enjoying the strong, cool, breeze that blew through our windows that evening, and naively assumed that leaving the windows open would guarantee a good night’s sleep with plenty of fresh air. Instead, I spent a good portion of the night hiding under the blanket, keenly aware of how much I was not sleeping while I waited for the next whine of the little buggers. Other than that, it was a comfortable night!

Breakfast by the pool

Birds at the feeder 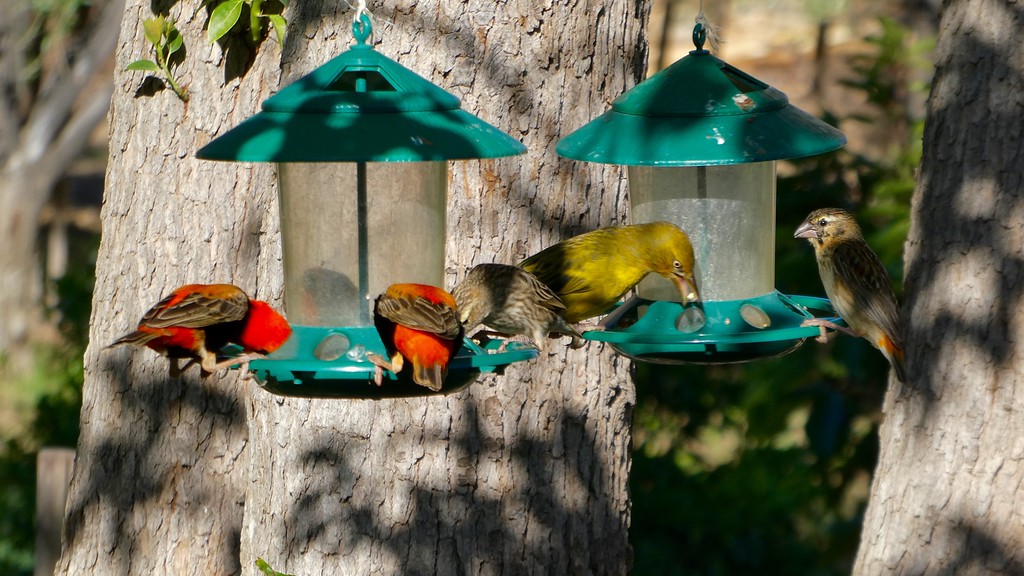 The breakfast buffet was light and healthy – just like I would expect from a Swiss person. Yogurt, muesli, veggies, meats, cheeses, cereals and juices; everything looked fresh and tasty. There were a couple of interesting additions to the layout that I have never seen before:

The juice pitchers had delicate lace clothes draped over them, weighted down by beautiful beadwork 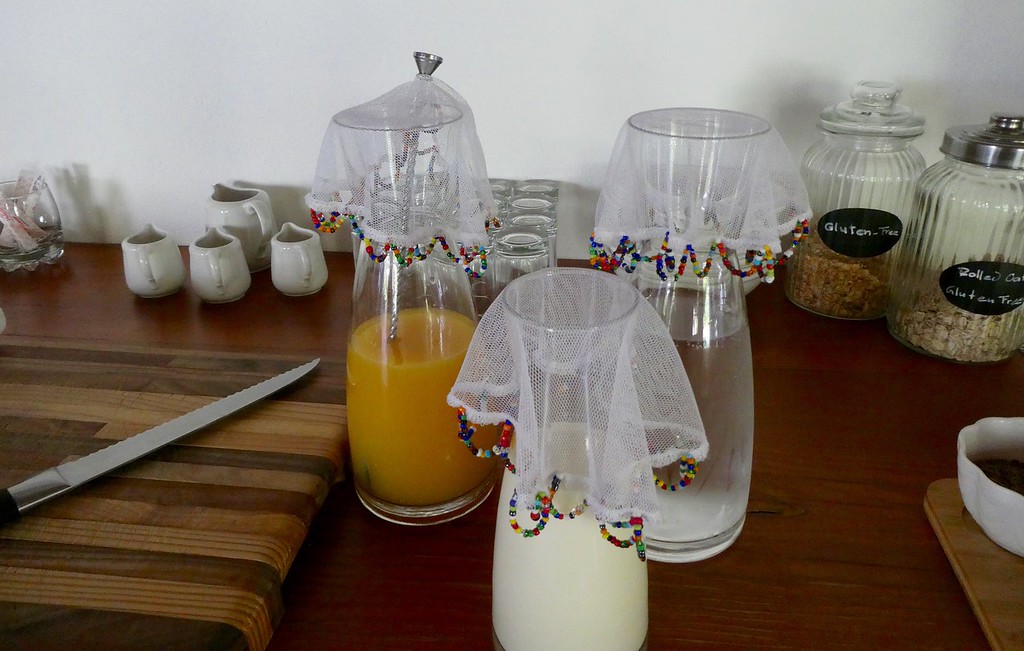 At 9 o’clock our bikes were packed and we were ready to hit the road. We were heading east, parallel to the Groot Swartberg Nature Reserve. The roads were flat and straight. Oh-so-straight. It really was unbelievable just how straight a road could be.

Borrowed from GoogleMaps because I can’t find my photos 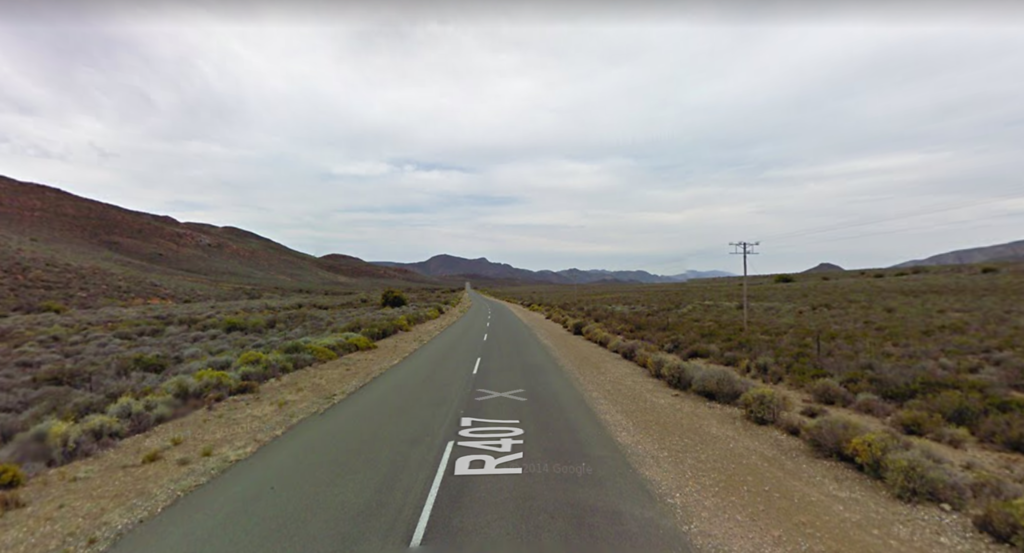 We had reached the edges of the Nature Reserve and the road took an abrupt turn south, into the Reserve itself. I assumed that we’d cross over the mountains, but instead of a road that crested over the top of the range, this road cut its way through, following the natural contours of the Grootrivier.

Video of the canyon road

The Garden Route – “you are here” 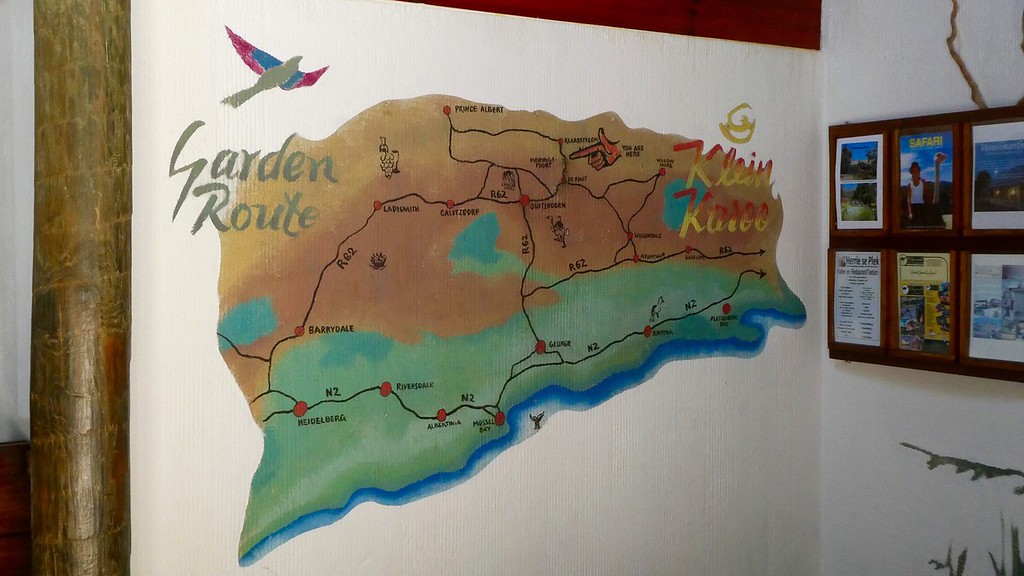 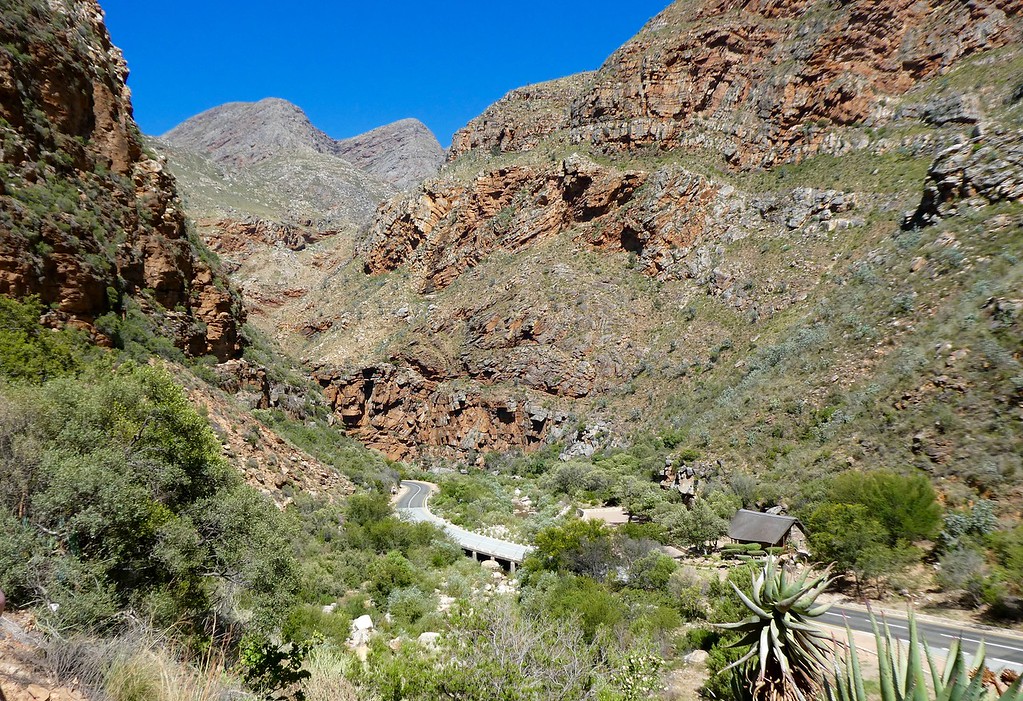 We had pulled off for a short diversion: the Meiringspoort Waterfall. It was a nice place to stop, and the waterfall itself was just a couple of minutes’ walk from the parking area. I was once again happy that I finally had a pair of boots that are comfortable to walk in for more than ten minutes.

Walking to the waterfall

I would have loved to have taken more photos, but the lighting was “difficult” and I knew that I would just be frustrated with the under/over exposed pictures I’d have when I got home. So I took minimal photos and burned the images into my memory instead.

Walking back to the bikes 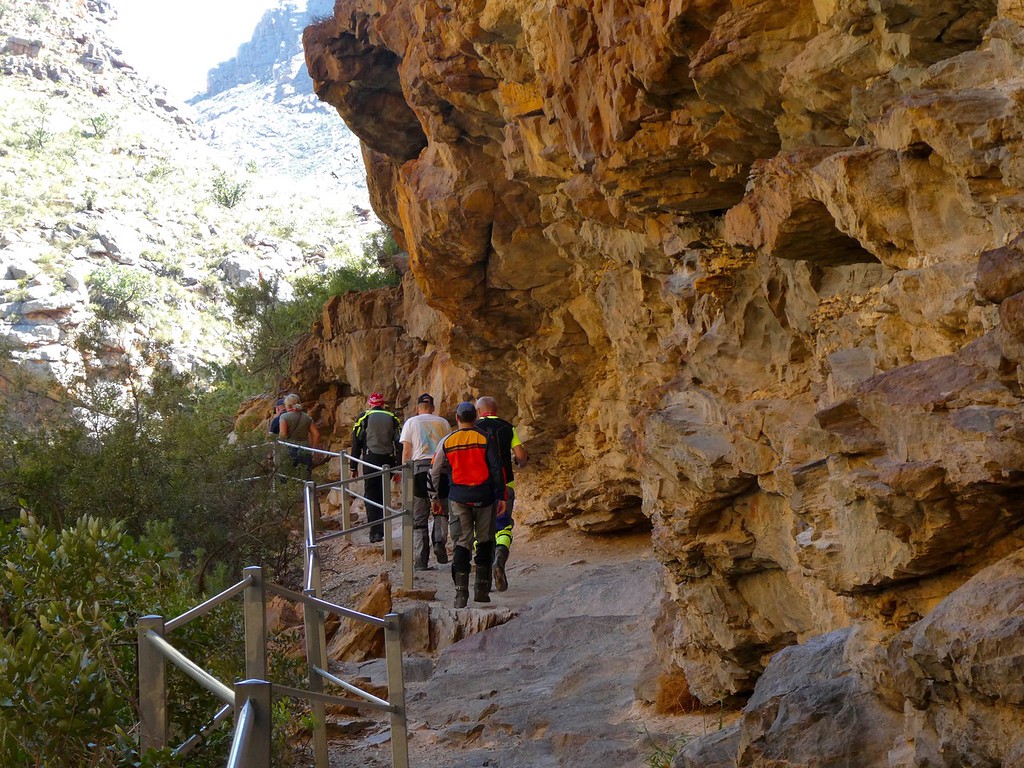 I spied this pair napping in the cliff face

Video of the canyon after leaving the waterfall

After a quick fill-up in De Rust we once again headed east down yet another long, flat and very straight road. 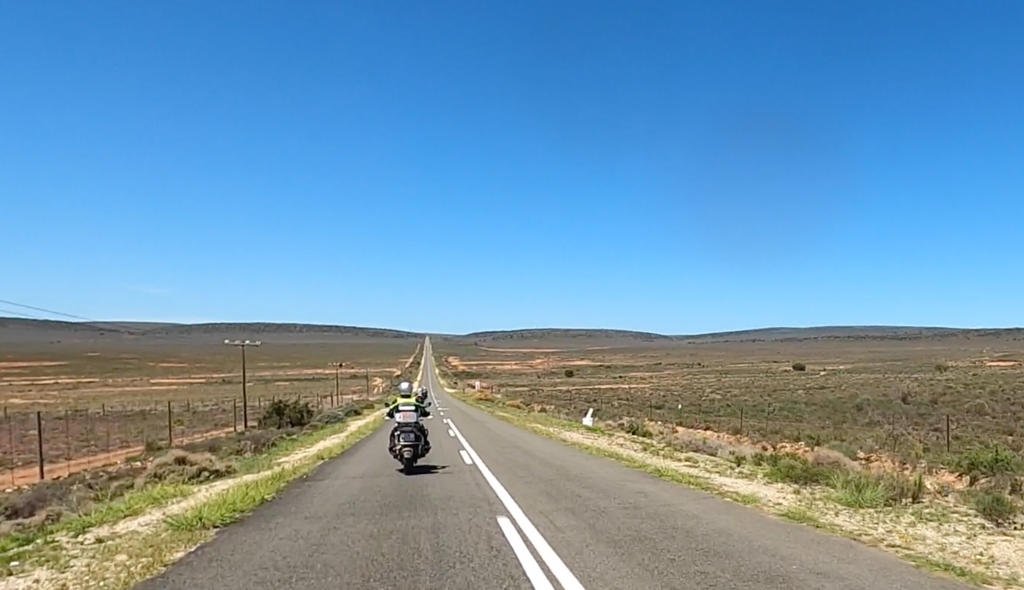 In the middle of one of those straight stretches of road, there was a sudden slow down and stop. At first it wasn’t clear what was the cause, but eventually I could jockey into position to get a better look: a truck carrying a massive load of hay bales had lost part of its load. And the police took this opportunity to check the registrations of the vehicles that were now stopped. Fortunately he only checked Hana’s bike and was apparently satisfied that we were all part of the same group and let us all go by.

Video while passing the hay wreck

And back up to speed

I have to admit that when people raved about “The Garden Route” this is not at all what I had in mind. I was expecting more scenery, more curves, more dramatic elevation changes. The name comes from the verdant and diverse vegetation found here and the numerous estuaries and lakes dotted along the coast. That all sounds lovely, but it didn’t seem like what I experienced. This photo is what I think of now when someone says “Oh! The Garden Route!”

Video of the *Garden Route* 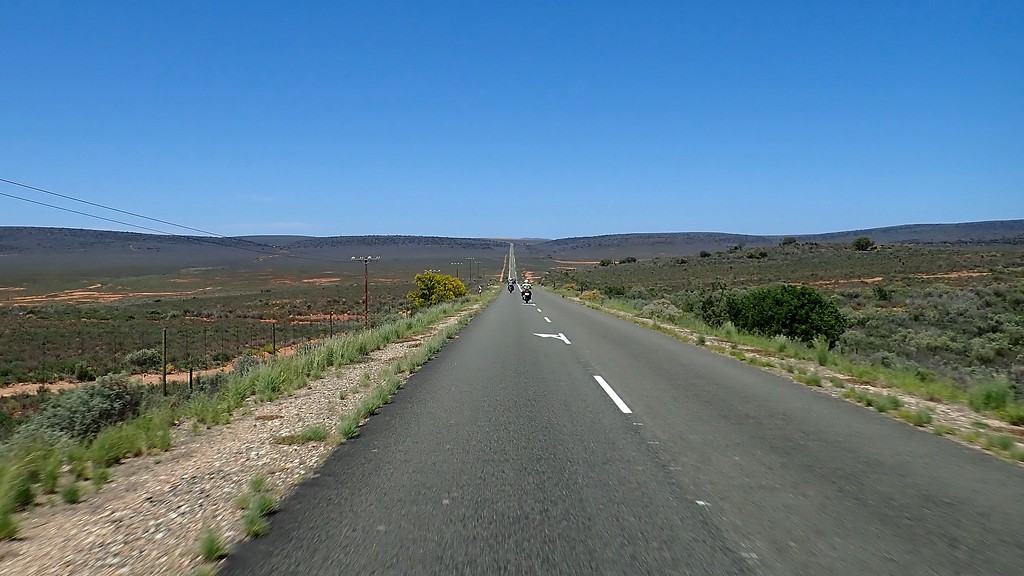 Our coffee stop today was in Uniondale, whose only claim to fame appears to be “a ghost“. Apparently the ghost is “a young woman who stands alone alongside the lonely stretch of road between Uniondale and Willowmore. When people stop to offer her a lift, she gets into the car and then – unsettlingly – vanishes.” Booo!

No ghosts hitched a ride with me when traveling through here. Bummer!

View across the street; that’s a Boer War monument on the hill in the background

I zoomed in on the monument

Back on the road! 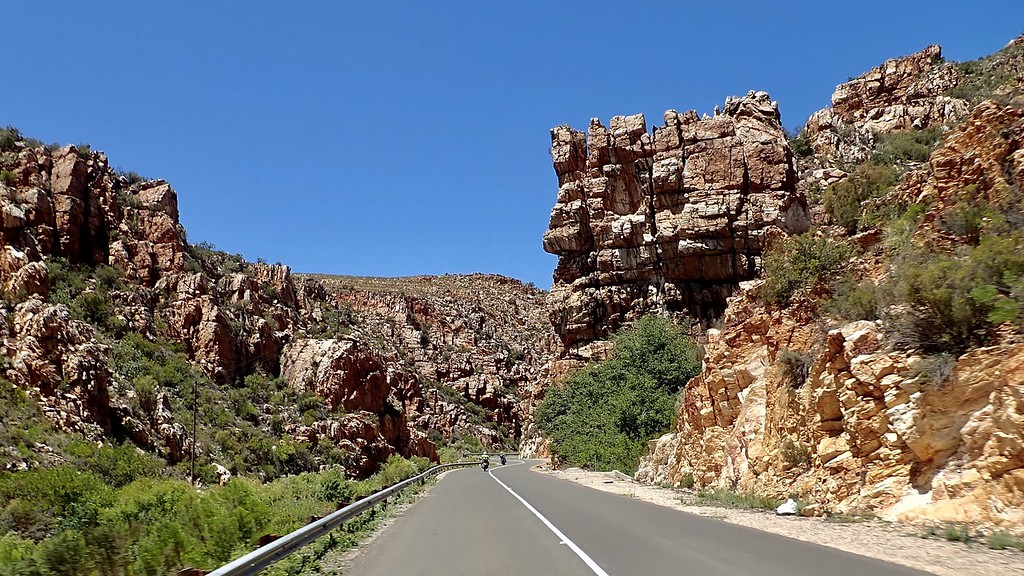 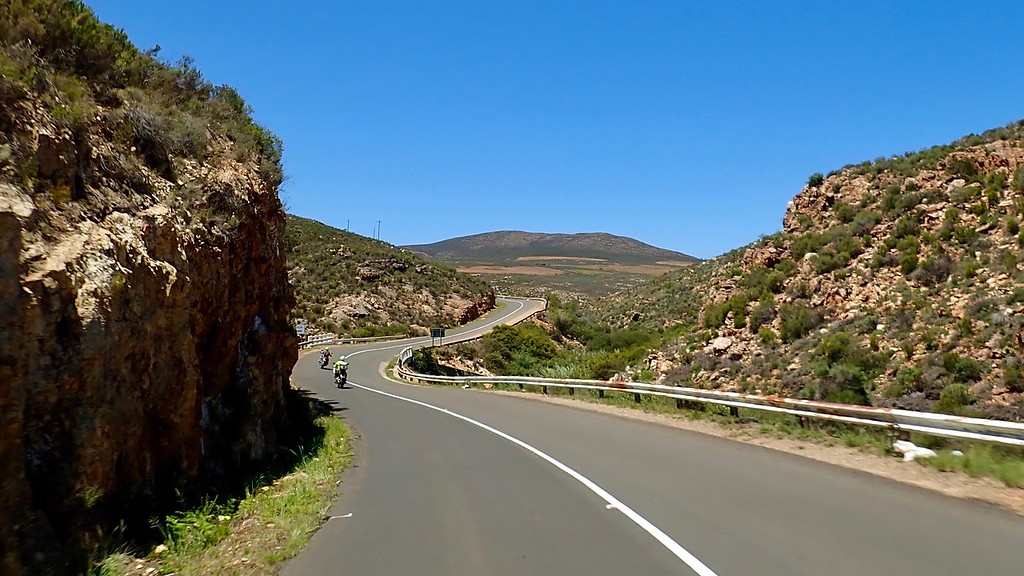 It was a really short ride after the coffee break before the pavement ran out. The new road surface was fast and easy packed dirt, and our group spaced itself out into “those who love dirt” and “those who tolerate dirt”. And then me: “I love dirt but want to take photos”. I ended up being at the back of the pack, and eventually back far enough that the dust had settled by the time I came by. 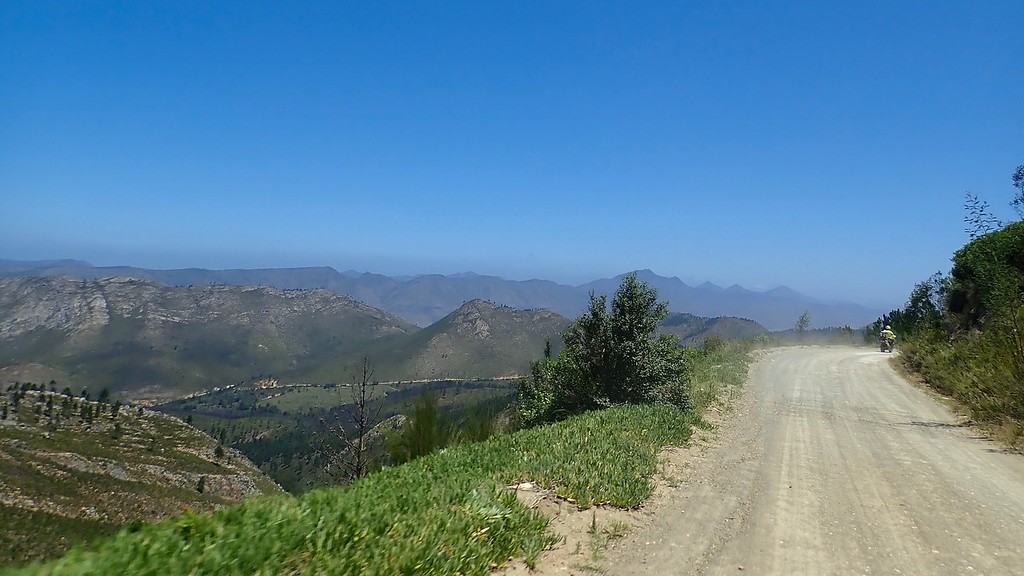 This region reminded me a lot of eastern Oregon. The pine trees gave off a wonderful smell in the heat, the dry-but-green hills, and the mountains in the distance all made me think of the trips I’d taken through the Oregon outback. But this was not Oregon – this was South Africa!

Long video of this stretch

Another long video from here

The road was narrow, and narrowed considerably more as it dropped down into a valley. This wasn’t an issue except that it was still a two-way road and many of the corners were blind. And while the road was fairly remote, it was still active and I had to keep on my toes – and on the left hand side of the road! 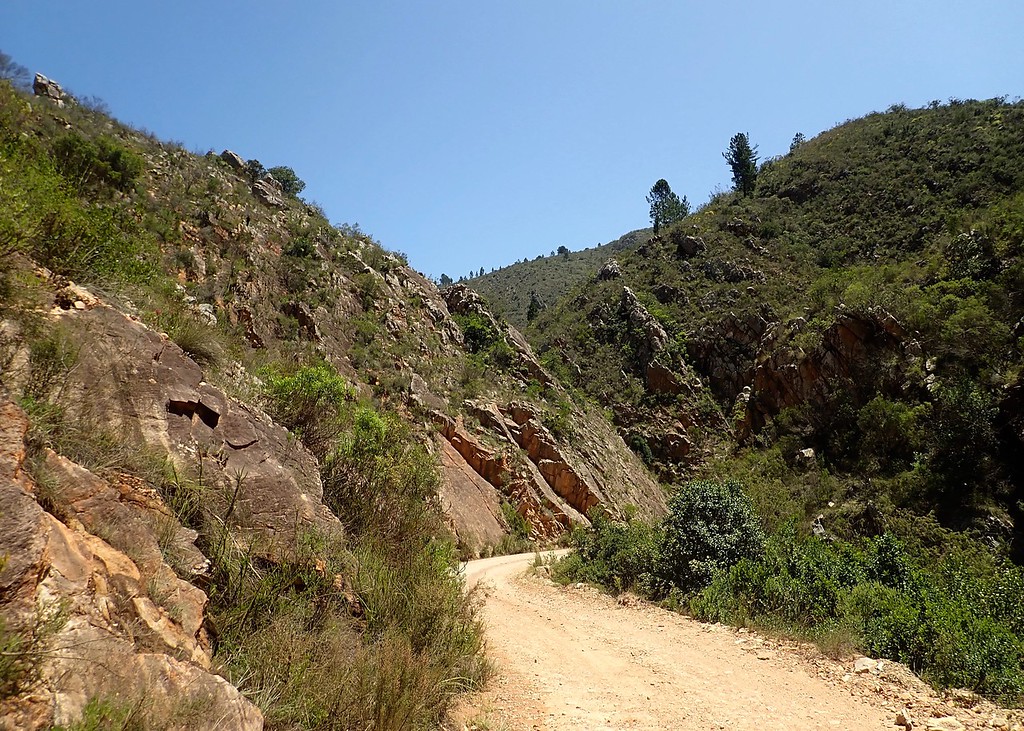 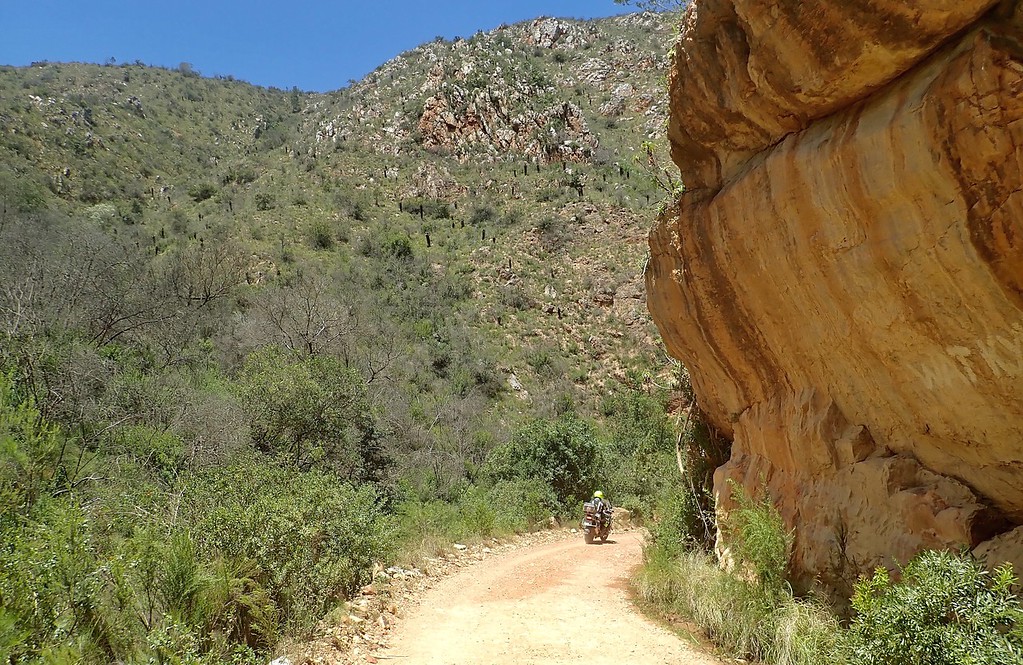 Video of the dirt road

We had reached the bottom of the valley, which was just a narrow flat area where the Keurboomrivier flows through. We were on Prince Alberts Pass, and it was a glorious road. The weather was outstanding – not too hot – and recent rain kept the dust down. 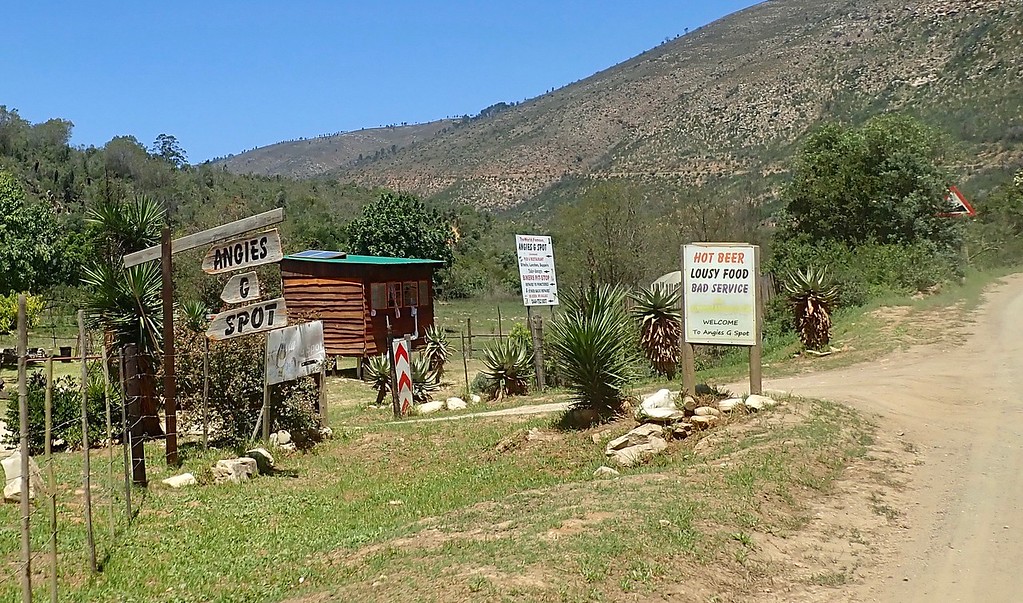 Video from this section 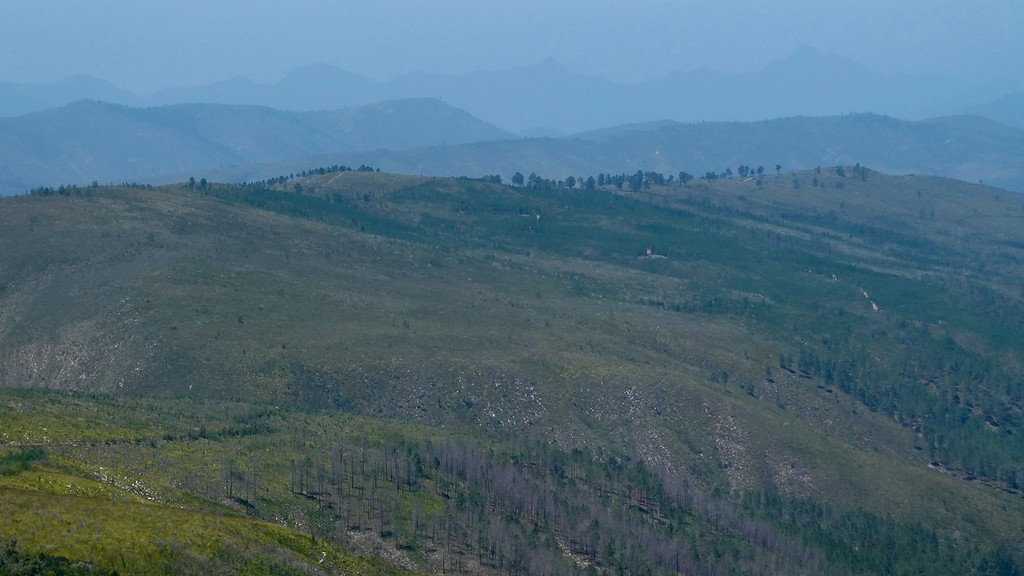 We had stopped again for the view and some water. The road had been much more technical then I had expected. Nothing strenuous, but still enough ruts and switchbacks and loose patches to keep me on my toes. And when I’m on my toes, that means that the camera is not in my hand, so there is no photographic evidence.

Always something on the road to be aware of 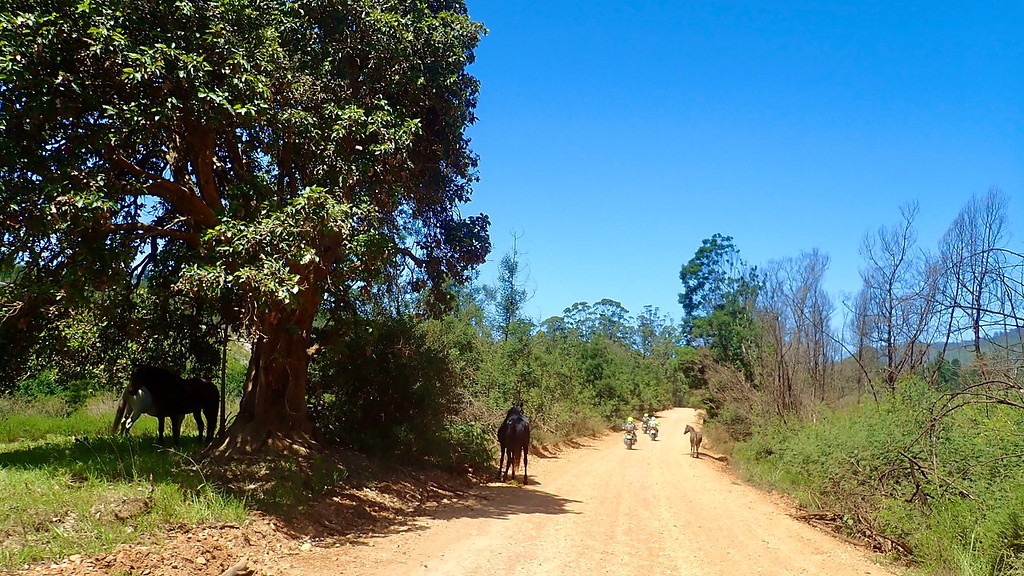 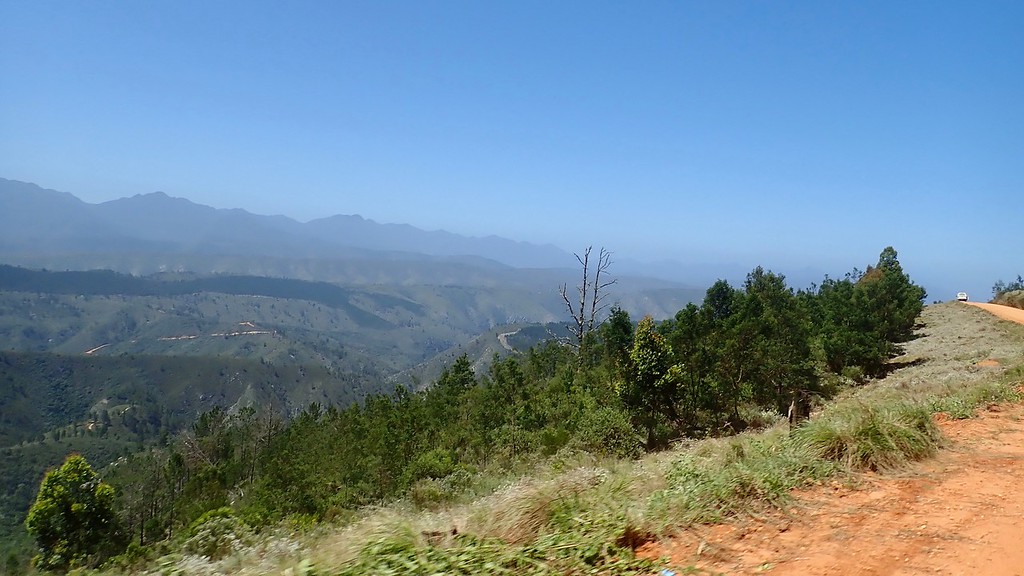 Workers taking care of the roadside 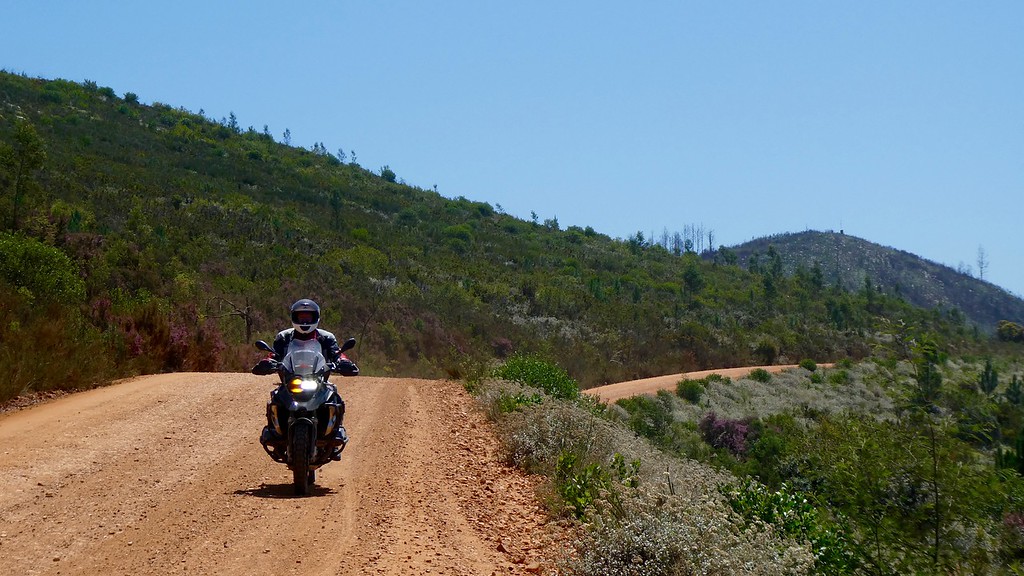 We stopped for a break and a re-grouping of riders and the support truck. The views were amazing; I was really enjoying today’s riding.

While at one of our stops we were joined by a local rider “Jerry”. He’s from Cape Town and made this road part of one of his regular routes. Yes, we had taken a very roundabout way to get here. If we had been serious about getting to Prince Albert pass from Cape Town, we could have been here in six hours instead of five days. I could see making this a nice weekend overnight ride, if I lived in Cape Town.

Jerry at the end of Prince Albert Pass 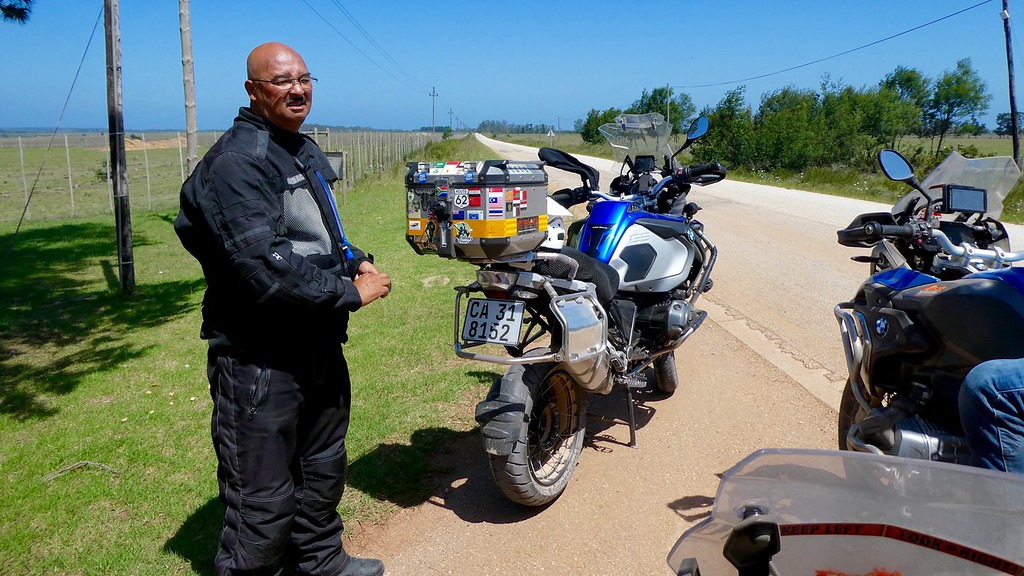 We returned to pavement, but not for long. It was lunch time! And Hana and David had quite a feast in store for us: we were going to a winery! And I am embarrassed to say that I do not know the name. This is really too bad, too, as it was an amazing meal. 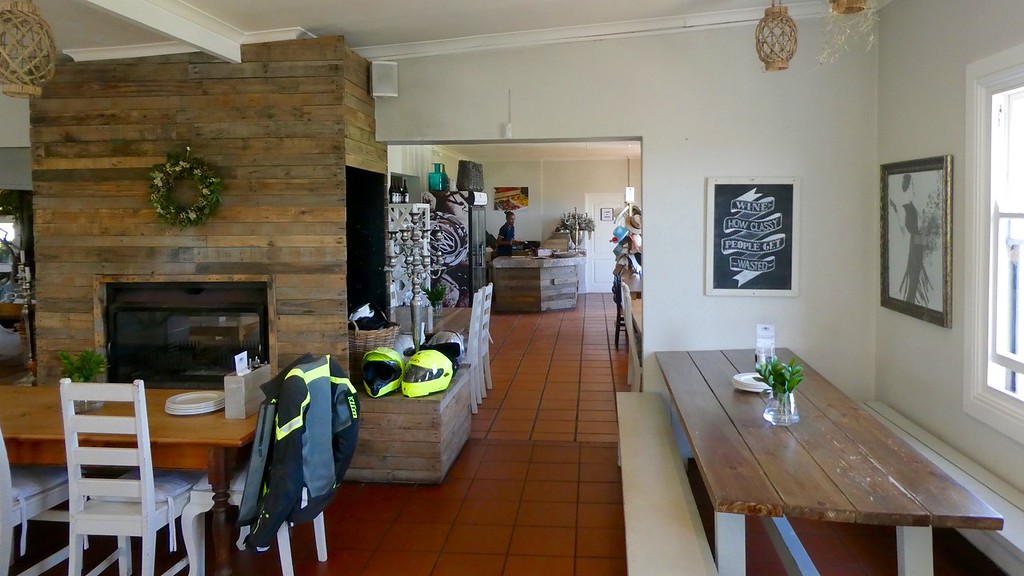 I love this style of map

This meal was unique on this trip, as it was served “family style”. Our servers just kept on bring platter after platter of scrumptious food to our table. Fresh bread, salmon, calamari, various salads…it was all amazing and our group was in full agreement that it was the best lunch we’d had so far.

The rest of today’s riding was generally uneventful. We were on a major road and heading towards the coast. The speeds were fast and the traffic light.

Toll roads suck on a motorcycle

I loved these flowers, but had a hard time capturing them with my camera

We were heading for “The Fernery Lodge and Chalets” near Storms River and in the Tsitsikamma National Park. It was a long, dirt road through a dense pine forest.

Colorful cows in this region 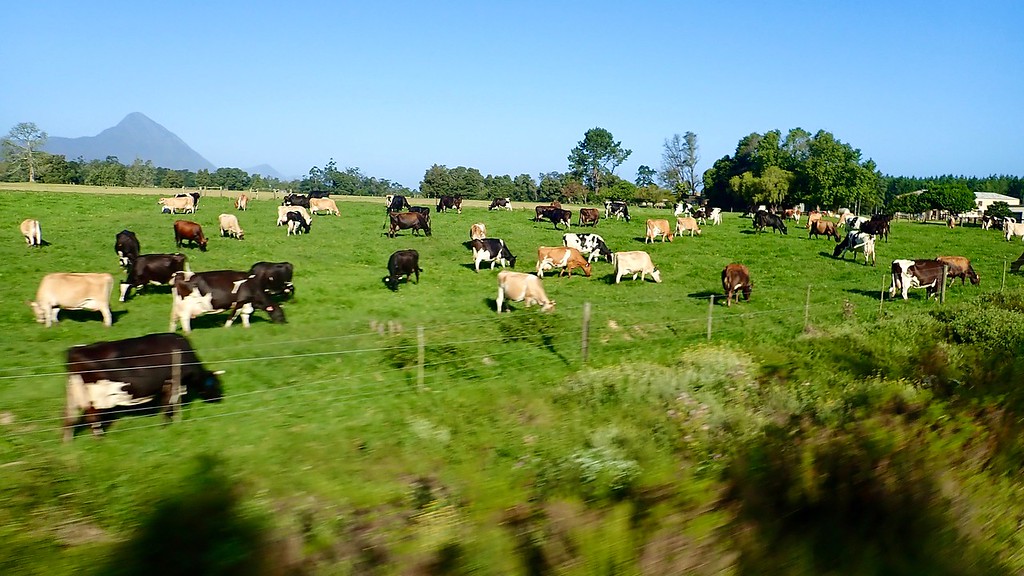 Through a dense pine plantation

Arriving at The Fernery 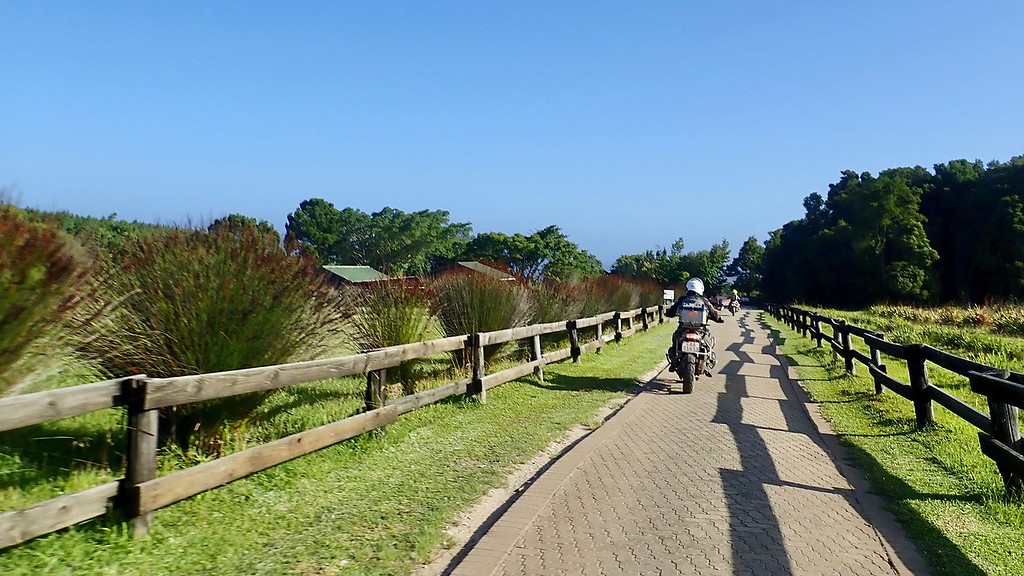 Once we reached the Lodge itself there was a bit of confusion as to where we staying and how our bags would get there. The property was large, with individual lodges for us accessible by a walkway. But should we leave our bikes near reception? Or should we park them closer? They had someone to carry our bags to our rooms, but it was not clear how or when that would happen. But like most things, it worked itself out and we were soon in yet another amazing accommodation.

The pool, overlooking the Sanddriftrivier that flows into the Indian ocean 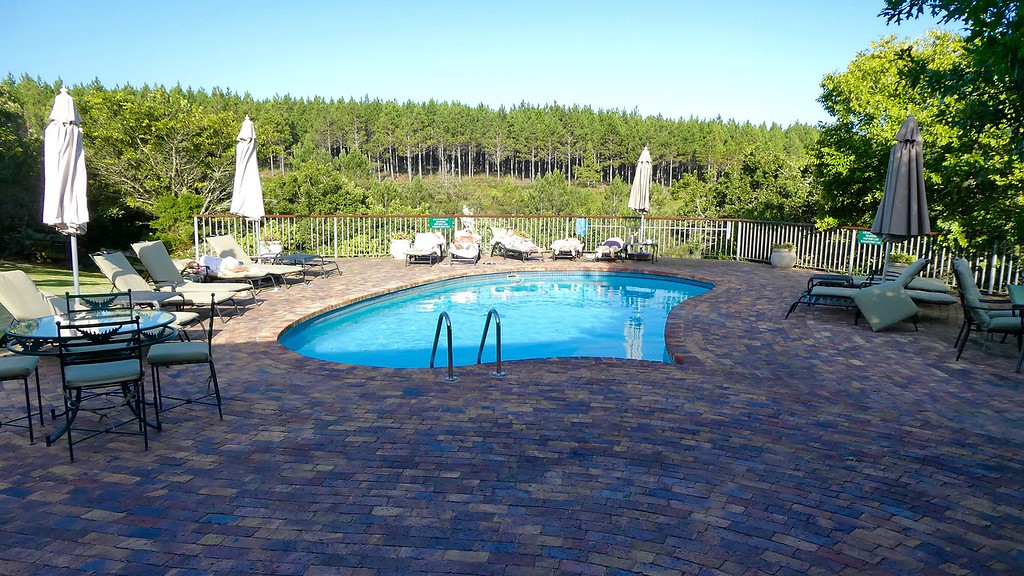 I would be happy to live here 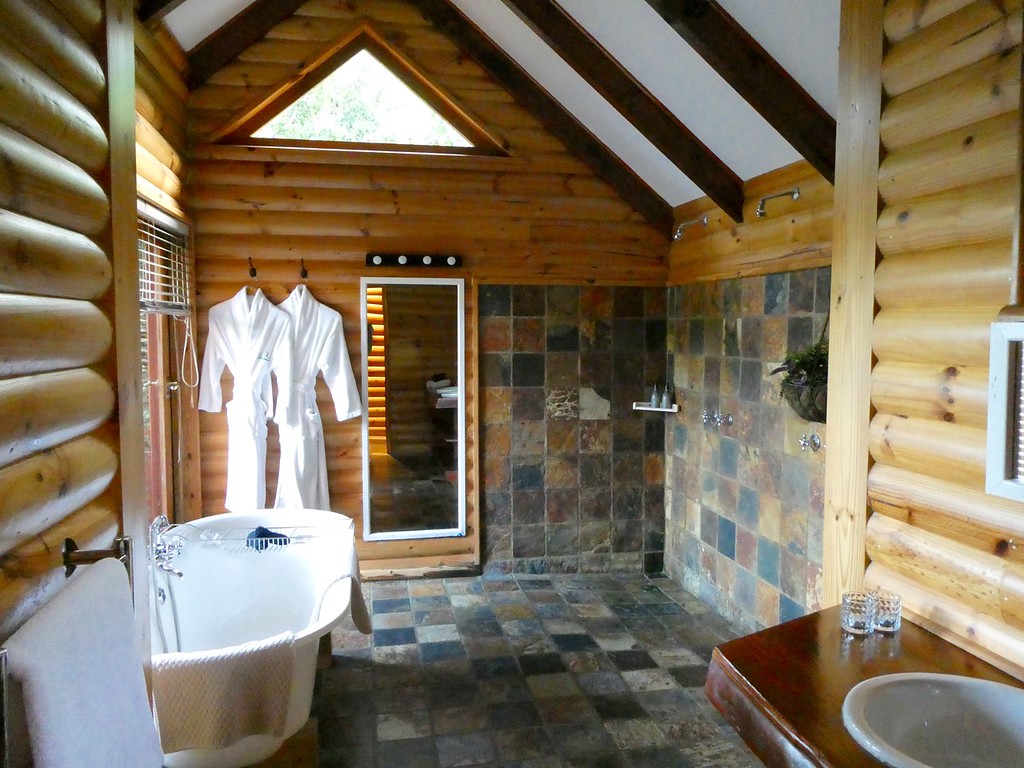 We had some time to explore the grounds, which Dan and I did gladly. We found that it is called “The Fernery” because they actually supply plants (ferns!) commercially. My green thumb was quite happy to see their green houses. 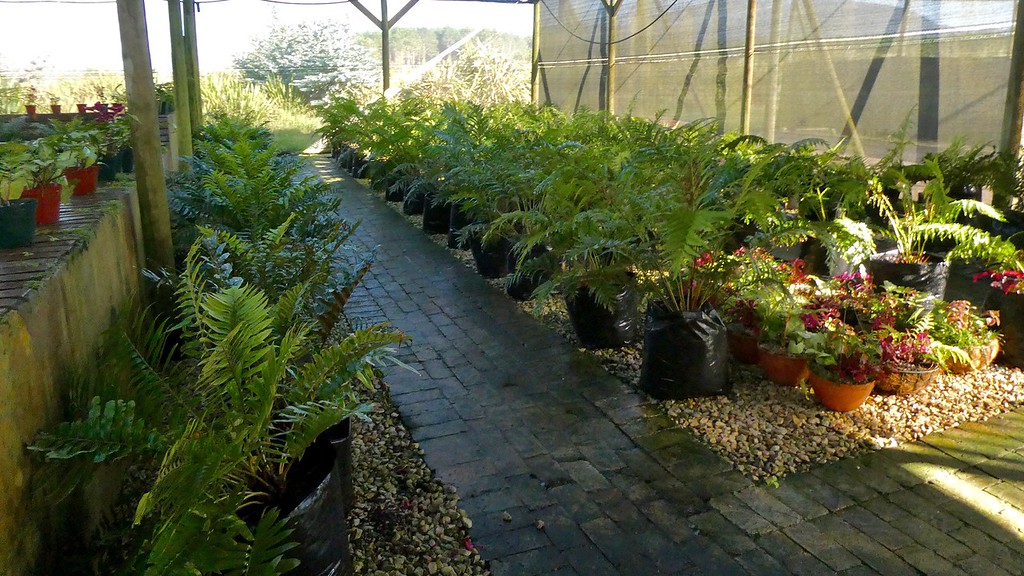 Pond plants on the property 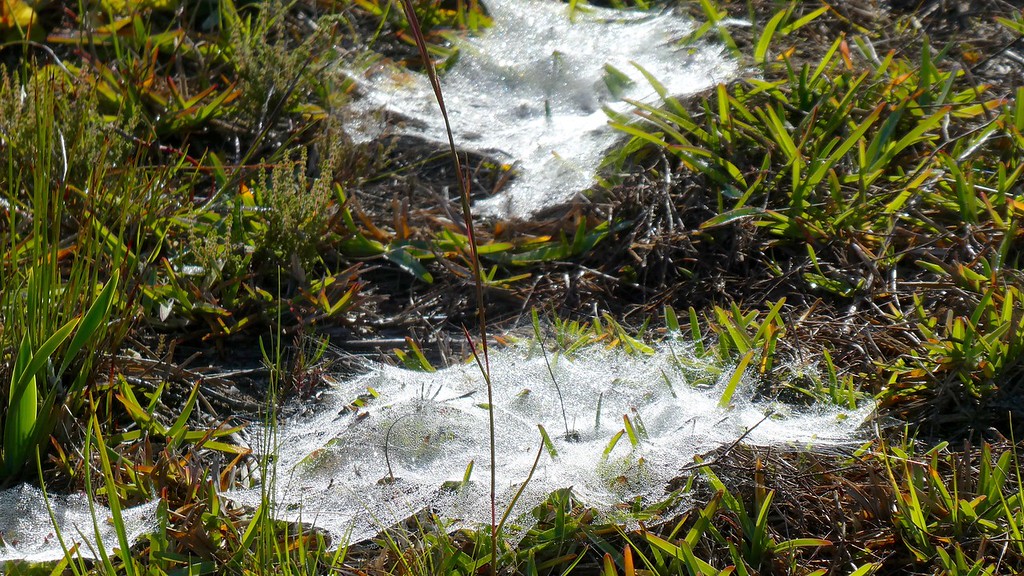 Morning view of the Sanddriftrivier 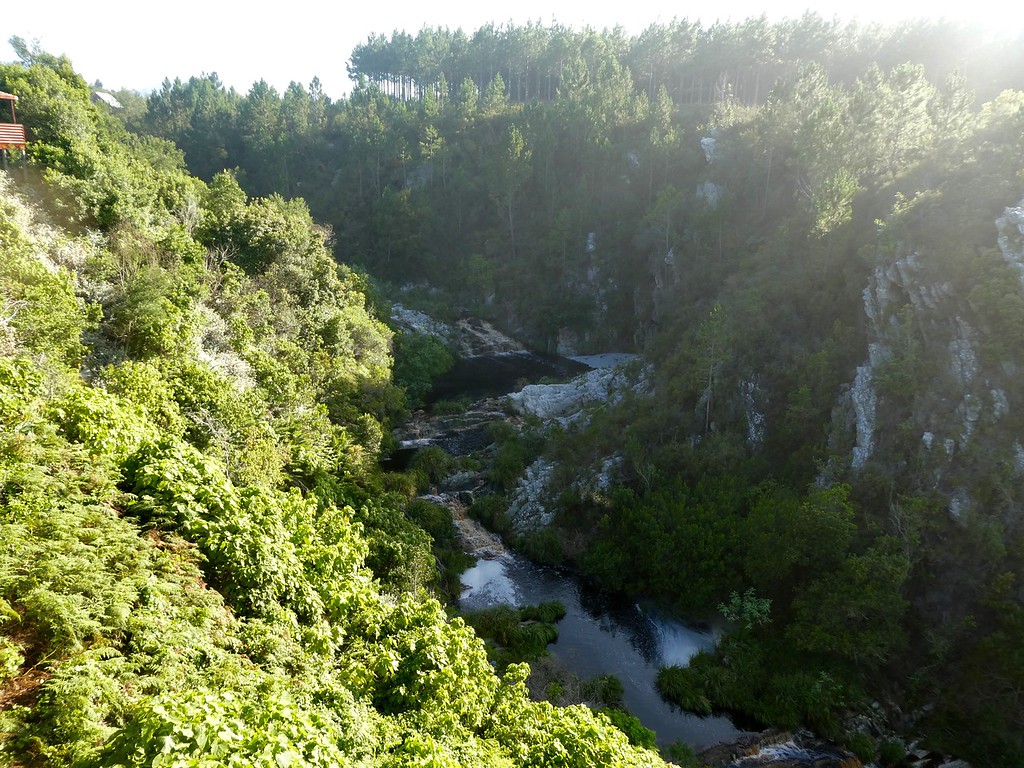 Right on the ocean! 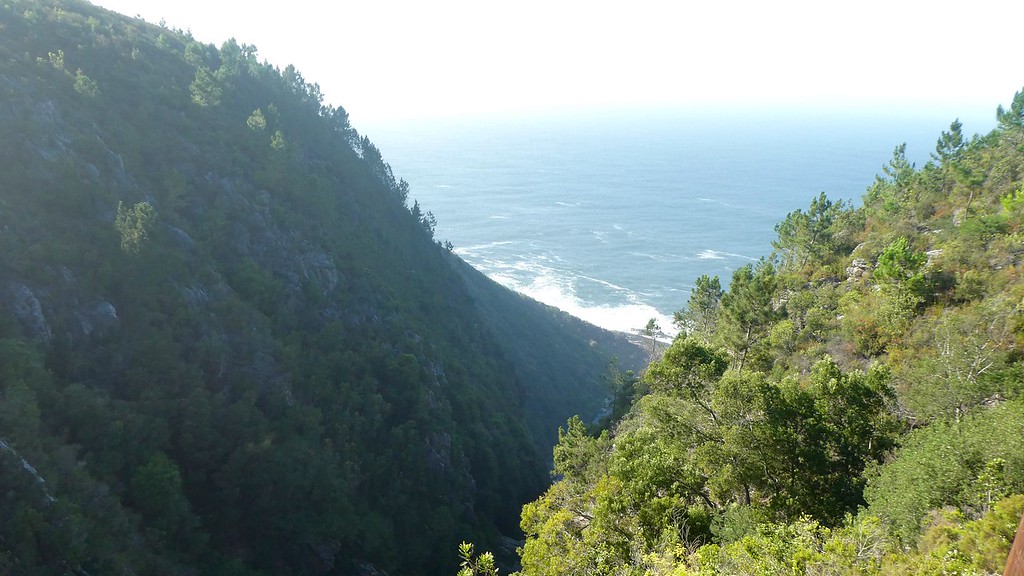