Today would be a short and quick day. We had a tasty light breakfast at the guest house before dragging our bags back out to the truck and gearing up. It was another beautiful morning and I was ready to see more of South Africa!

Fueling up – they pump, we pay! 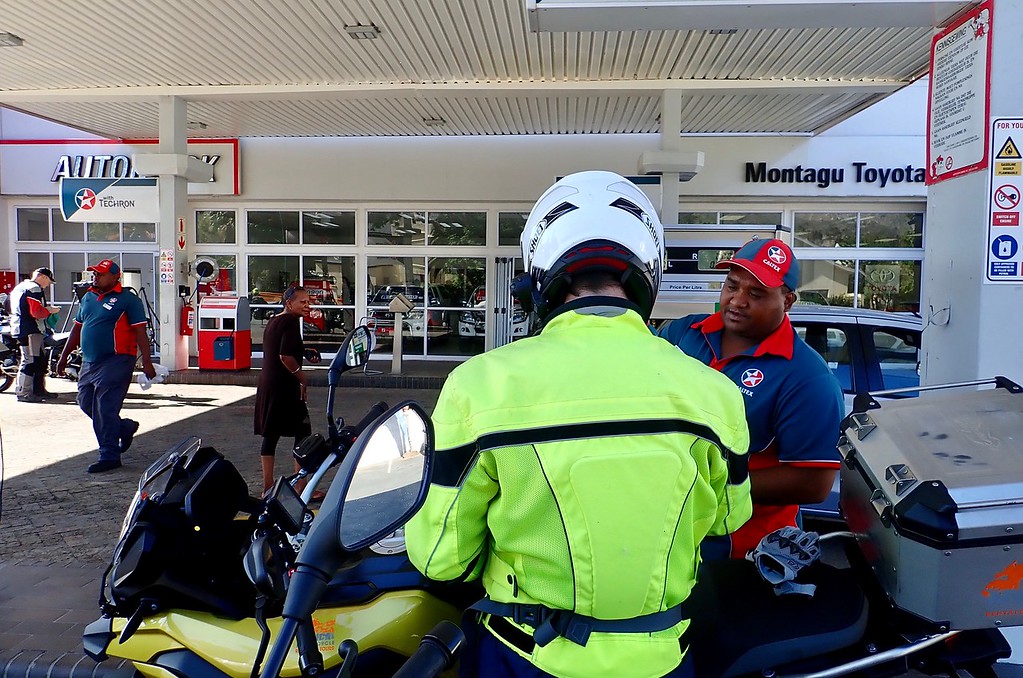 Drivers in South Africa were very courteous: any time they noticed that someone was coming up behind them, they would move way off to the side, allowing plenty of room to pass regardless of oncoming vehicles. They were good drivers in other ways, too, with great lane discipline and awareness. I was a little surprised, as I assumed that it would be utter chaos down here. 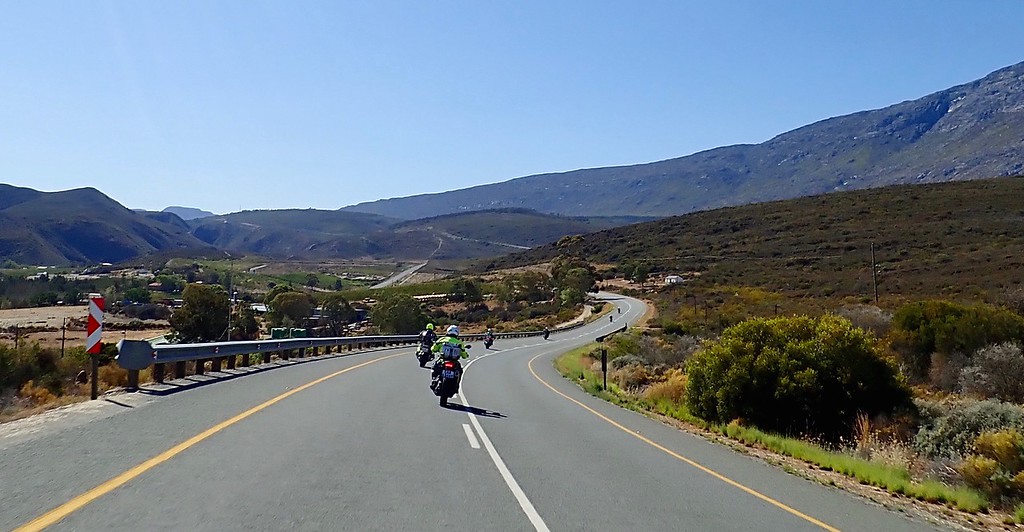 Workers in the orchard 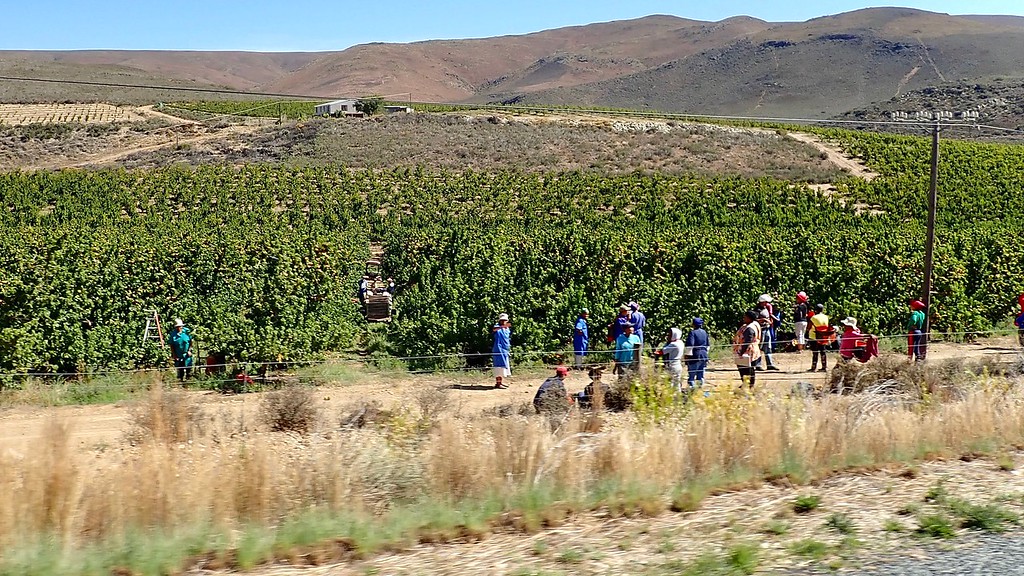 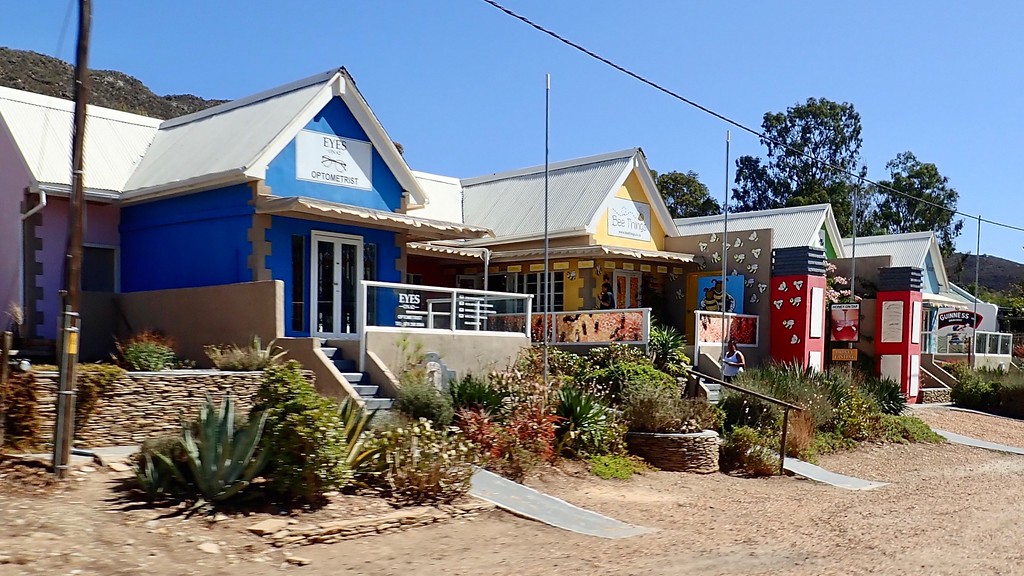 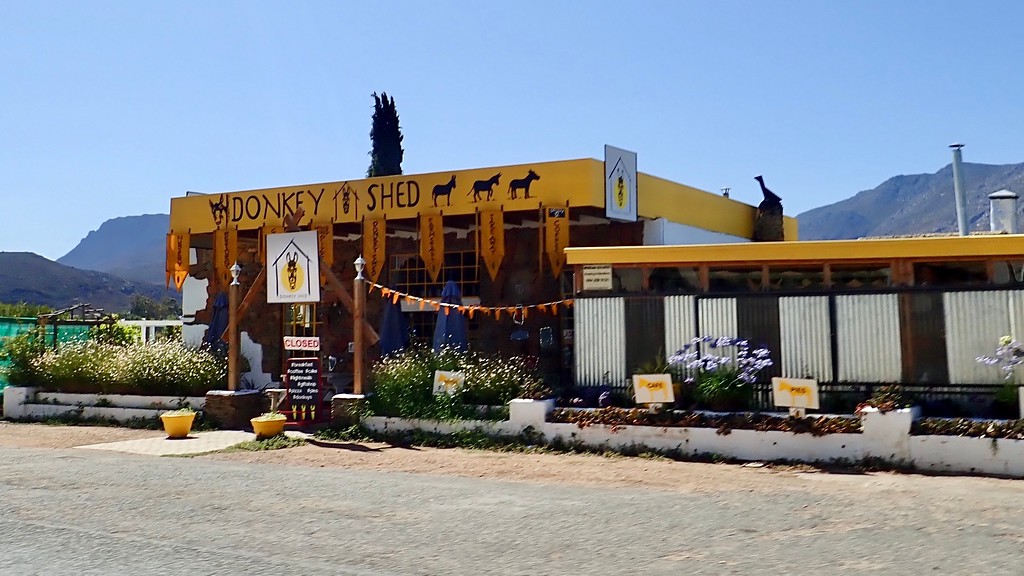 This morning’s coffee stop was at an odd place called “Ronnie’s Sex Shop”. It was a little hole-in-the-wall cafe with a ceiling hung with donated shirts, undies, bras… some with personal messages written on them. The cafe didn’t have much to offer, but considering that there wasn’t anything else around, what little it did have made it stand out. For anyone who knows, it reminded me a lot of Coco’s Corner in Baja, Mexico. With the exception of Coco not being there, of course! 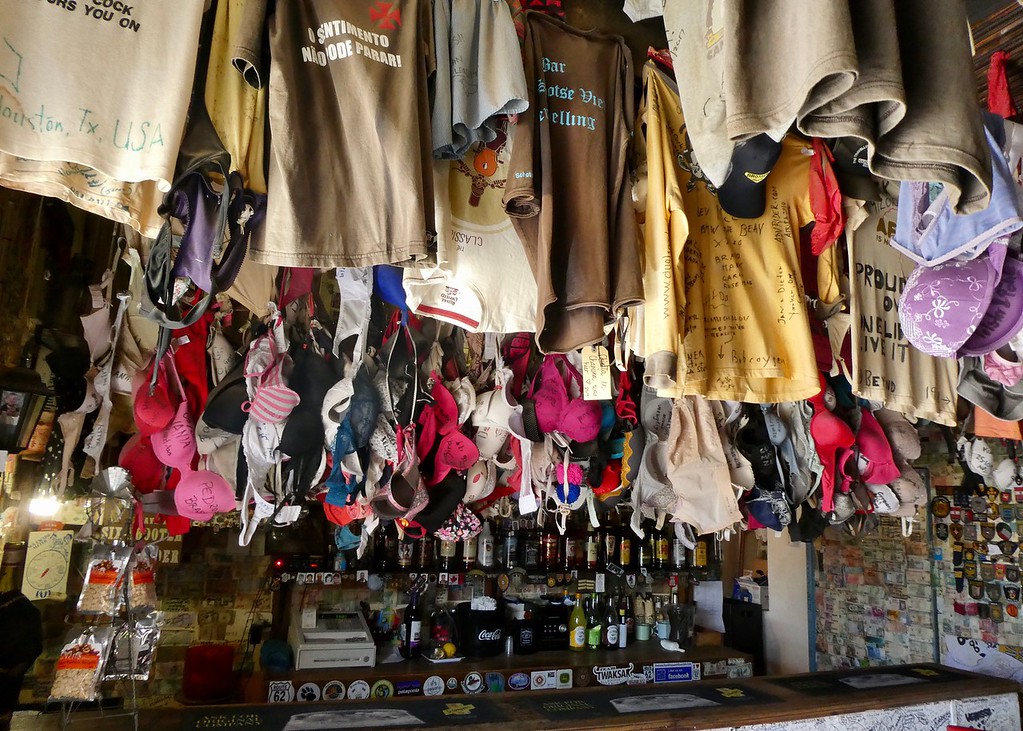 After our coffee at Ronnie’s we got back on the bikes and back on the road. It was already hot and not even noon. I was glad that it was going to be a short day! And part of that day included Garcia’s Pass, a lovely, high-speed road through the Garcia Nature Reserve. 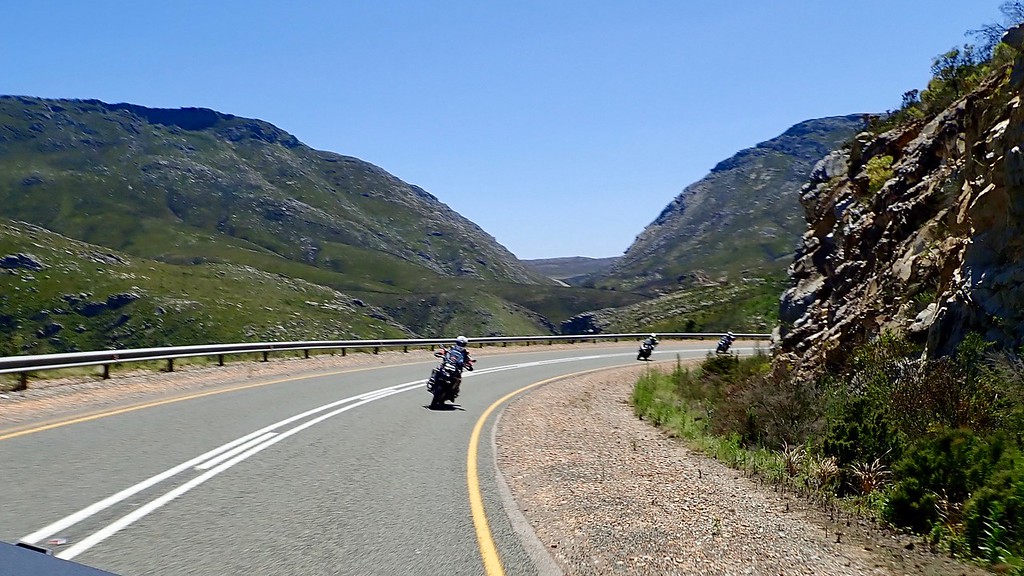 The countryside was getting greener

Sheep grazing in the field

We turned off the pavement and onto a dirt road – it was the first dirt road of the trip! It was an easy road and a good place to get a feel for the bike’s handling on a non-paved surface. It was also interesting to see how the group re-ordered itself according to those who had more confidence than others.

From that dirt road there was a short section of pavement, and then more dirt until we reached the gates of Gondwana Game Reserve. This was our destination; now we just had to get to our lodge.

At the gate we checked in and waited for our escort. Because we were now within the reserve’s property, there was nothing between us and the animals. And since the animals were not used to motorcycles, this could be a dangerous situation. A safari vehicle pulled in front of us and asked us to follow closely. We did – it was too early in the trip to be lion food.

Following our escort through the park

At some point we stopped. There was a lot of discussion between our escort and other rangers: apparently there were a couple of elephants grazing near the road and we were not allowed to pass by. After some deliberation it was decided that we could get around by taking a “side road”. Challenge accepted!

Elephants in the bush 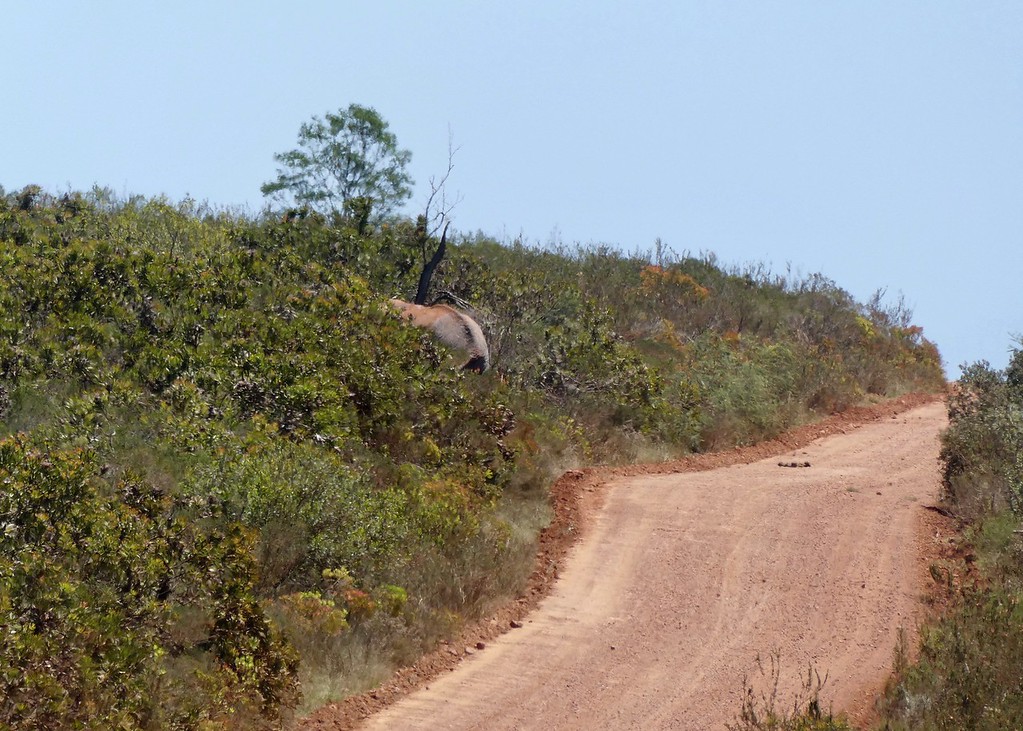 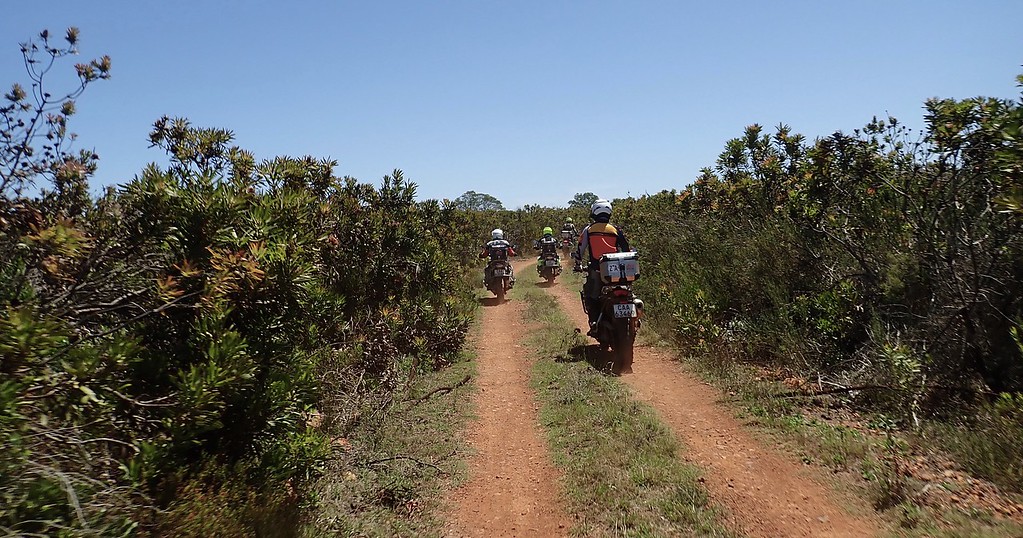 The fynbos were in bloom

The accommodations were extravagant; there is no other way to put it. We each had our own separate lodge and there were a couple of larger buildings for guests to gather at. Our room was amazing. I never thought that a round living space could be so comfortable!

View across the pool to the gamelands

A shower with a view!

Video looking around our lodge

We had a few hours to ourselves, so I used it to do some sink laundry and charge my electronics. The time went much faster than I expected and rather wished that I had the chance to actually sit and relax and enjoy the view. Time was up before I knew it and we walked over to the bar for our 4:30 game drive. The first game drive of the tour! I was very excited and had no idea of what to expect.

While you’re waiting for the safari to start, I can recommend reading up on the Making of Gondwana. It really is fascinating how this reserve came into being, and what it takes to make something like this work.

Link to the Safari