We had early morning game drives before, but none of them required us to be ready at 4:45 am. Ugh. Dan and I had discussed whether or not he would go on the game drive, but it was decided that with his ribs being as sore as they were, it would do him no good to ride around on bumpy roads in the back of a truck. I promised him I’d take photos.

The rest of the group had gathered at the appointed time and we stood outside in the pre-dawn, waiting for the driver to show up to take us to our destination: Kruger National Park.

And we waited; he was late.

While we waited, we chatted about this and that and Jonathan complained how terrible the mosquitos had been! We all looked at him with surprise: didn’t he use the mosquito netting? It was Jonathan’s turn to looked surprised. “I thought that was just decorative!” We all tried not to laugh, although we did tease him about it for the rest of the day.

Our driver finally showed up and we piled into the truck and returned down the hill to Hazyview and then on to Kruger Park’s Numbi Gate. Once we got to the gate we had to wait even longer; because we had arrived late, we were now almost last in line to go through the gate once it had opened. One by one, other safari jeeps and even buses passed through the gate and into Kruger. Finally it was our turn.

The first thing we saw were some elephants. Another jeep had already pulled over to watch them and we pulled up behind them. It was a small family group and they played hide-and-seek with our cameras in the dense trees.

The landscape in Kruger was vast and impressive, and ecent rains made everything green and lush. What really stuck out to me was the height of the grass. In the smaller and more restricted private game reserves, the animals grazed the grass down very short. But here, with almost 5 million acres of land to graze on, the grass was able to grow tall. It was beautiful, but I also realized that it made it much harder to see the animals. 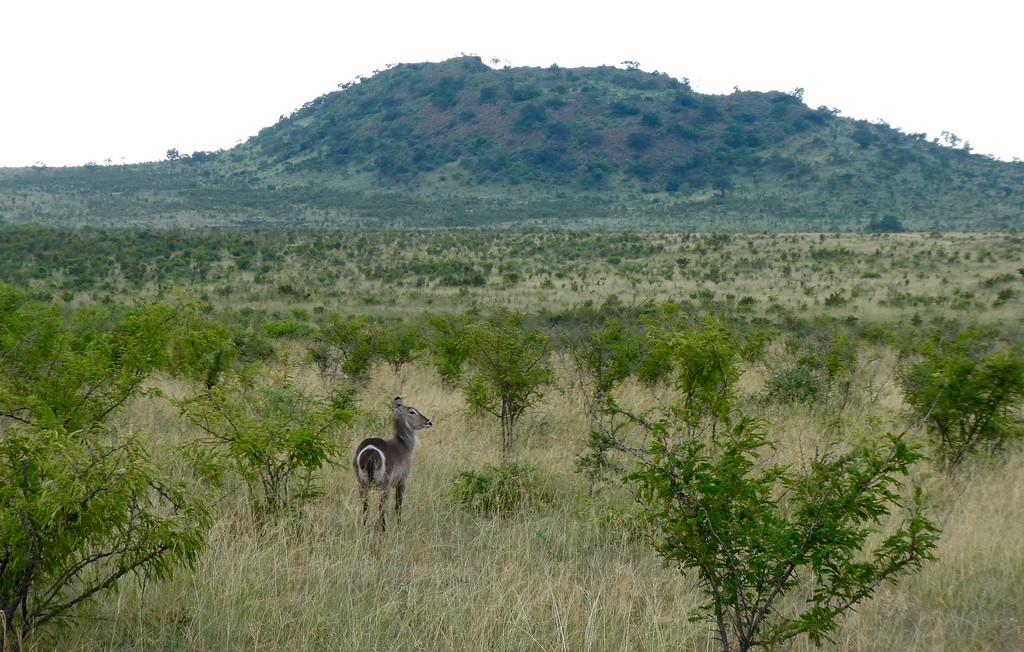 The park had some rules that I appreciated. Although there was a mix of public and private vehicles on the roads, it was forbidden to leave the road surface. In the private game reserves, although our guides generally stuck to the main roads, they were allowed to drive anywhere in the park in order to get a better view of the animals. In addition, no one, under any circumstances, was allowed outside of their vehicle. But the rule that was missing? The limit of two vehicles at a time parked at an animal sighting. This came into play later in the morning.

For now, our guide had threaded his way through the intertwined road system and taken us to a small pond. From our spot we could see a couple of hippos submerged in the water. More interesting to me, however, were the birds along the shore. 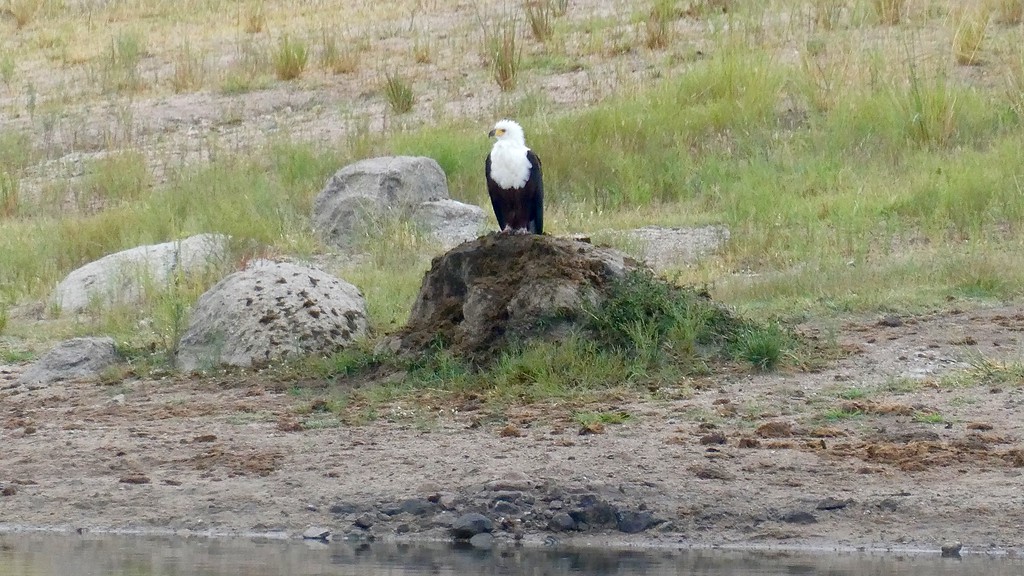 The weather was great for me, but according to our guide, it wasn’t the best weather for viewing the animals. To be honest, I wasn’t terribly concerned about what we saw today; nothing could top what we had already seen on our previous game drives. Of course, that didn’t mean that I wasn’t watching out for them! 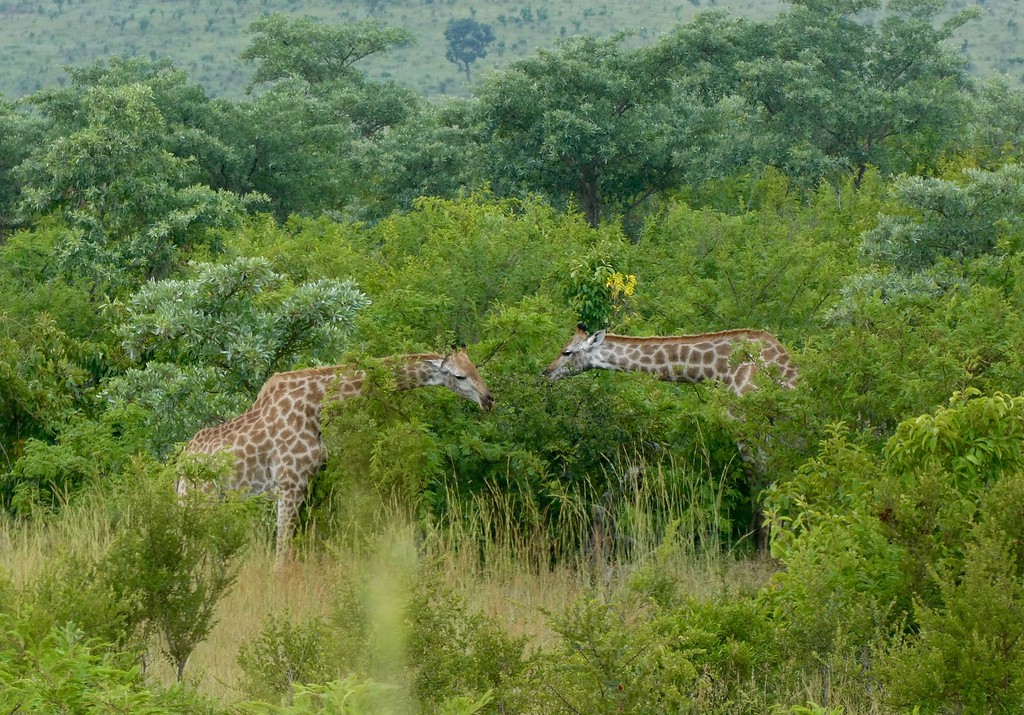 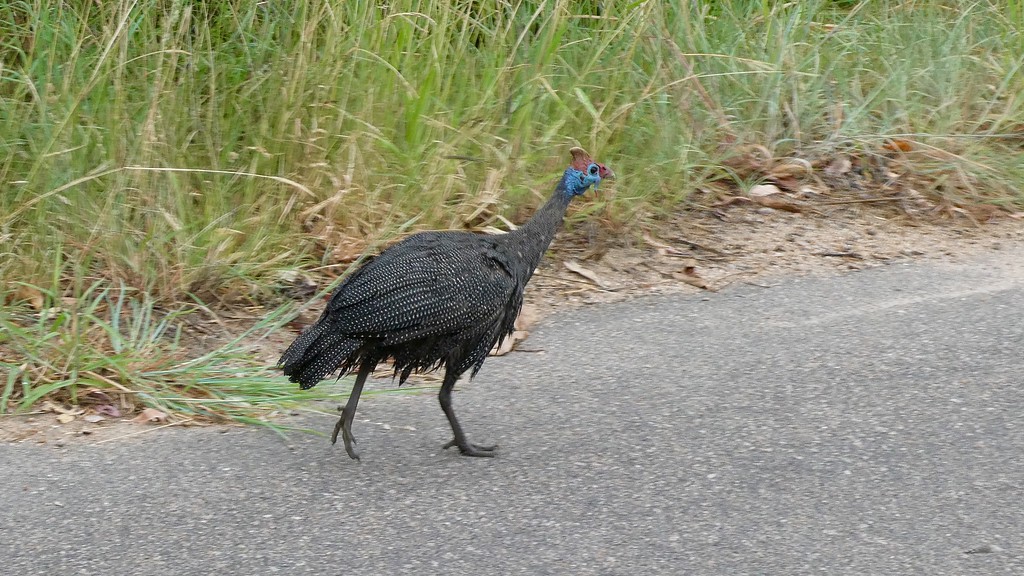 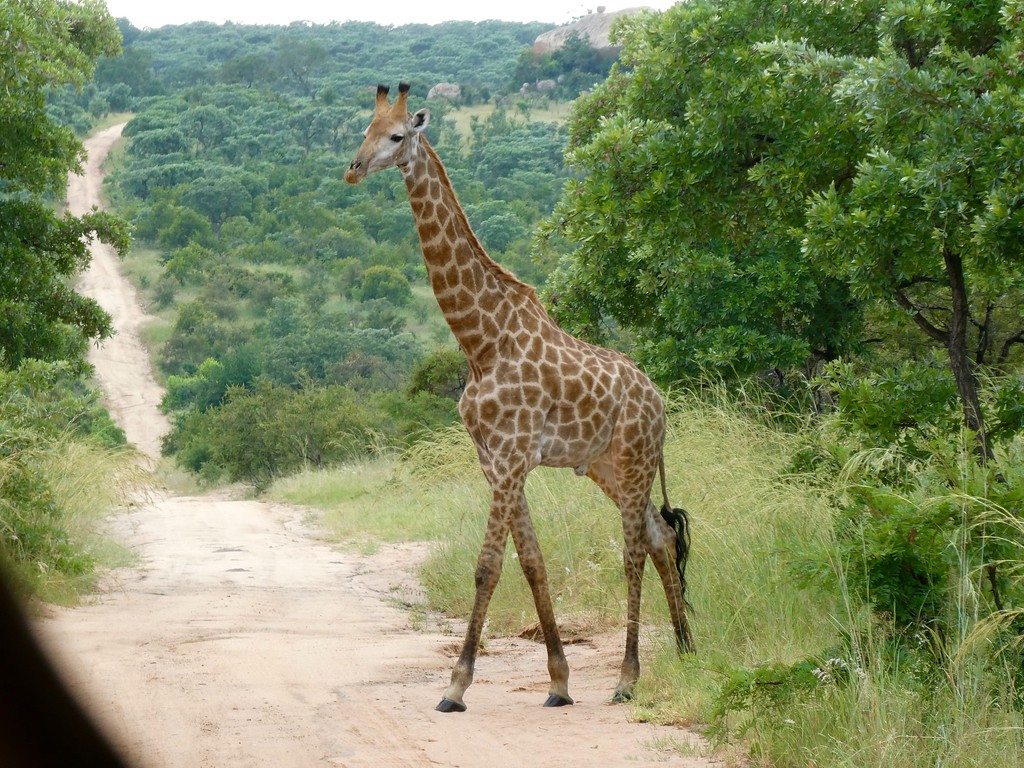 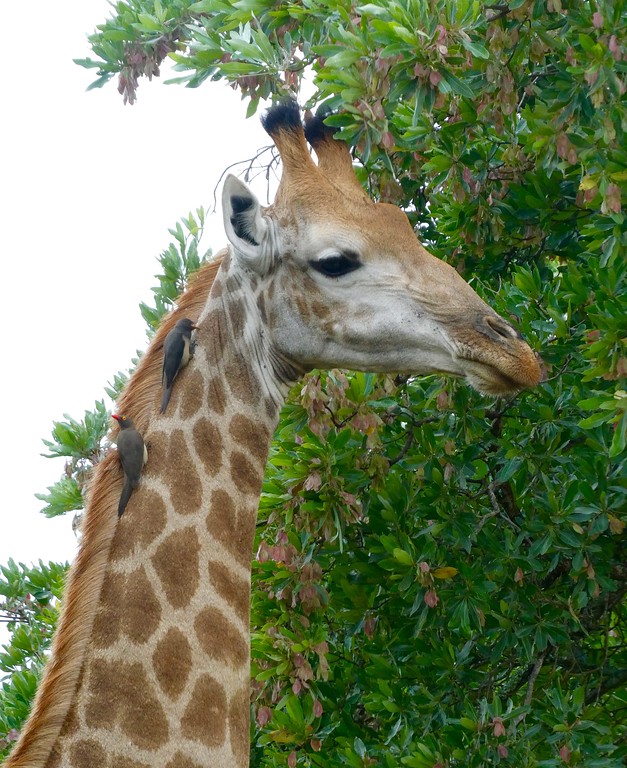 Our guide had mentioned that a lioness and her cubs had been spotted near this rock yesterday, but they were not to be found today. 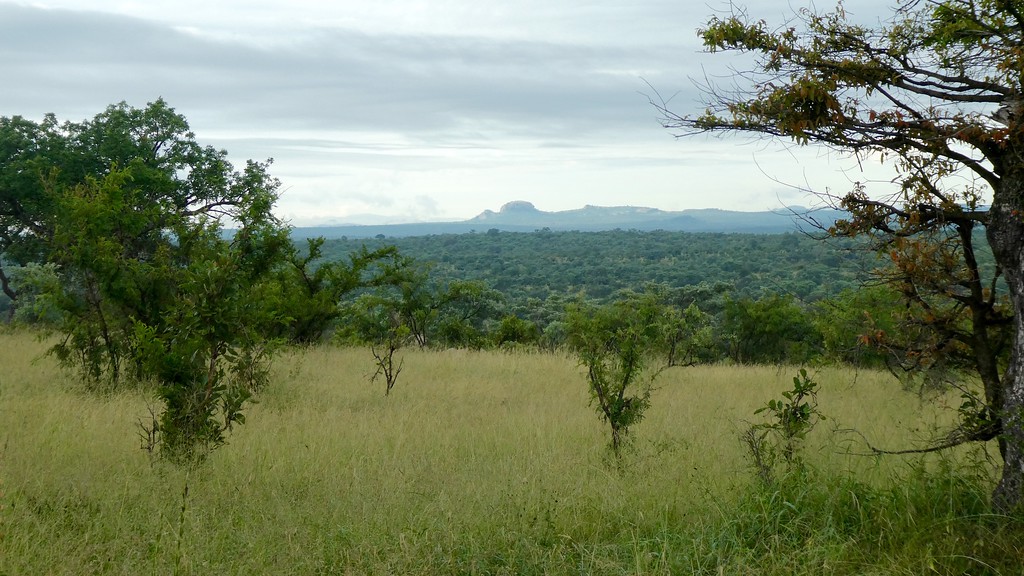 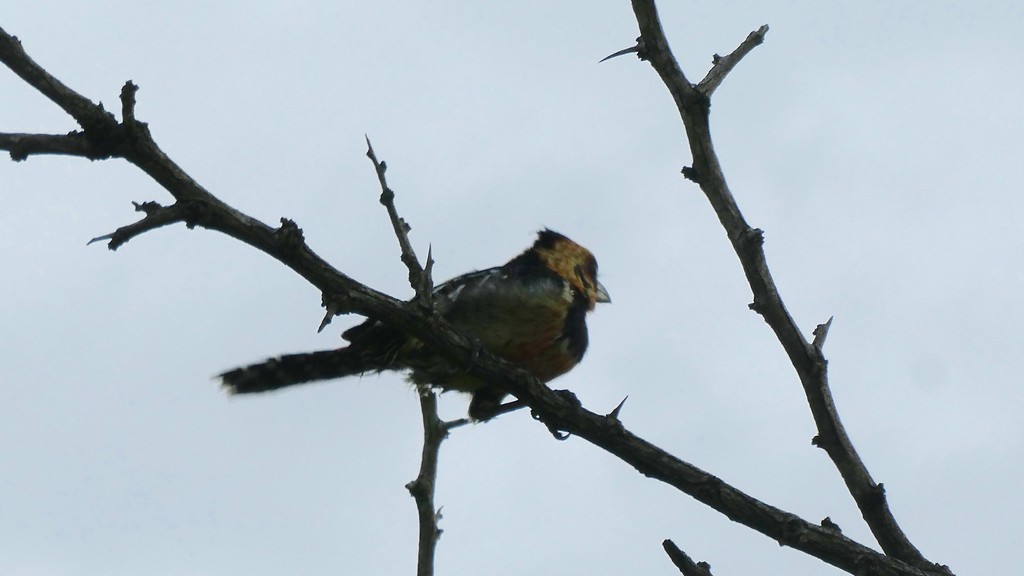 Kruger Park – for as far as the eye can see!

African hyenas sunning themselves on the warm road surface

At one point, our driver was busy on his radio and excitedly turned the truck down one road after another, driving as fast as was allowed within the park. Something was afoot!

And then just as suddenly, he slowed back down. He informed us that a leopard had been sighted, but because of all of the vehicles that had pulled up to watch, it had felt threatened and had retreated into the bush. Argh!!! I was instantly annoyed with the lack of a “two vehicle” rule here in Kruger. I knew I’d never have another chance to see a leopard on this trip.

Our early morning departure was catching up to some 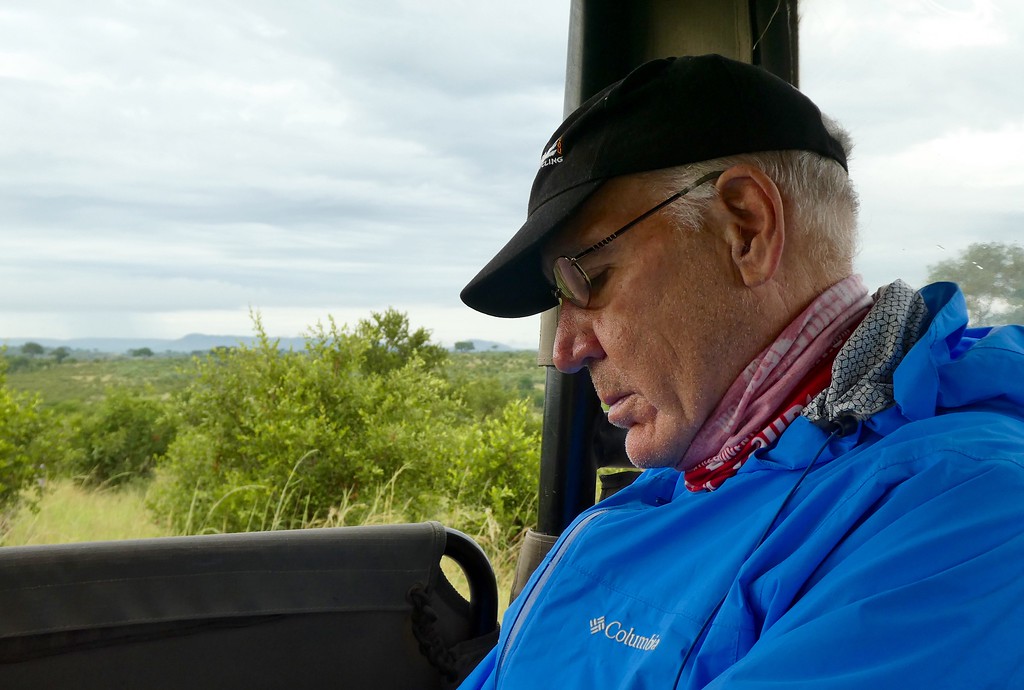 Plenty to eat this year

Thick brush made it hard to spot anything 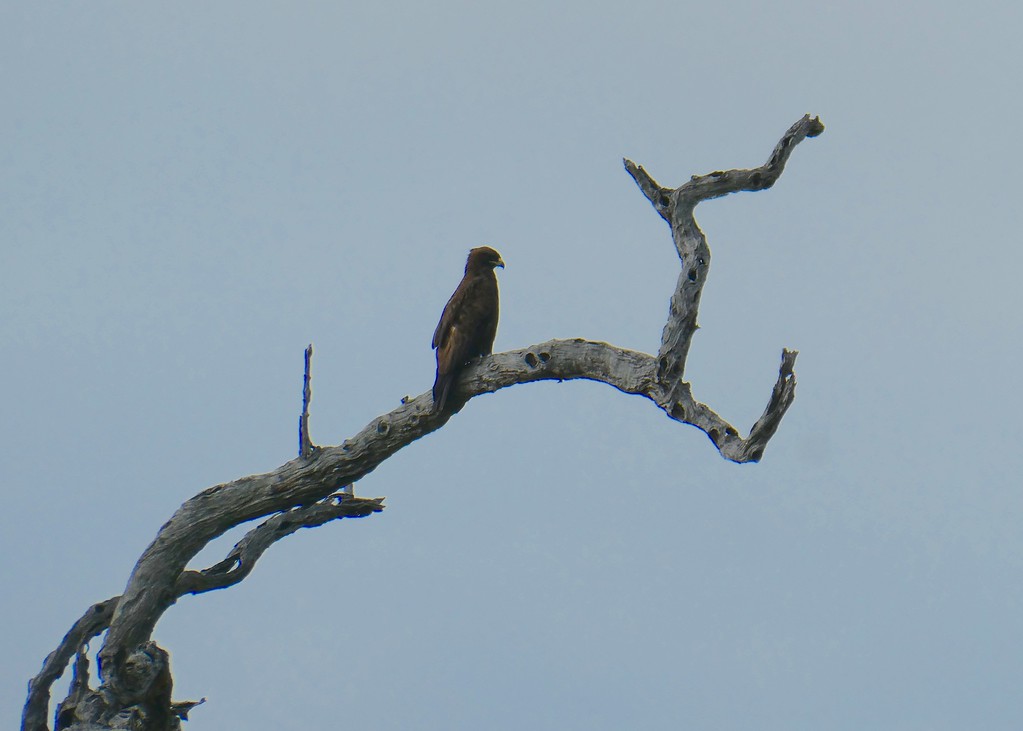 We spotted another family of giraffes 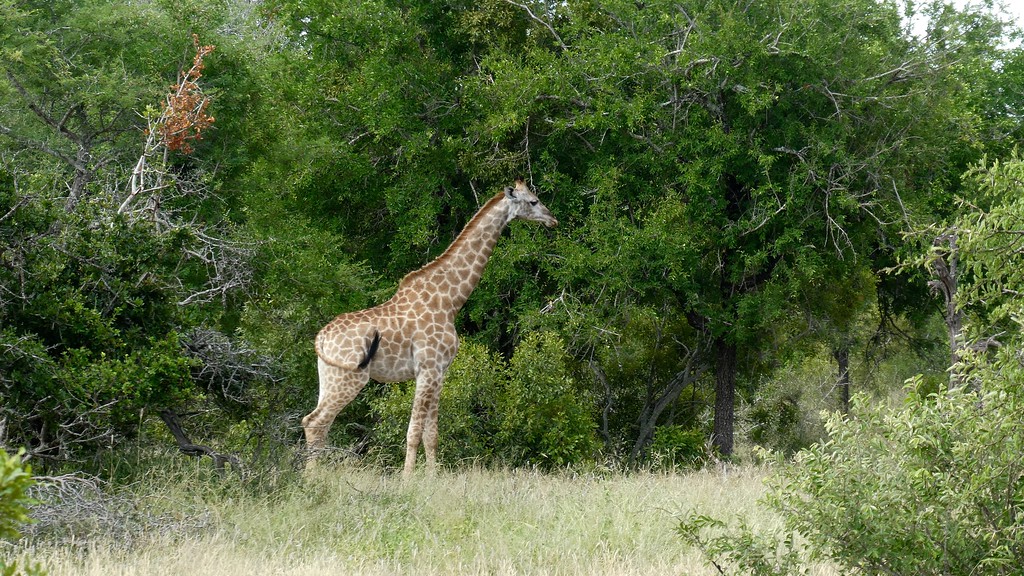 Ooooo – give us a kiss, luv 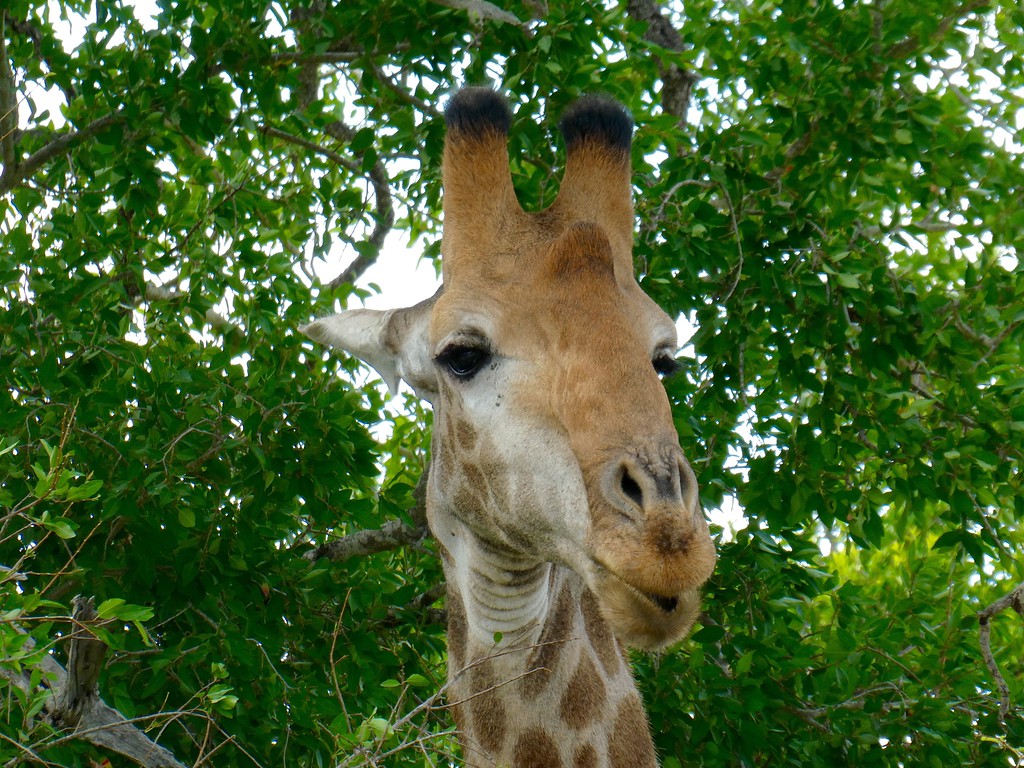 Some of the few Wildebeests we saw today 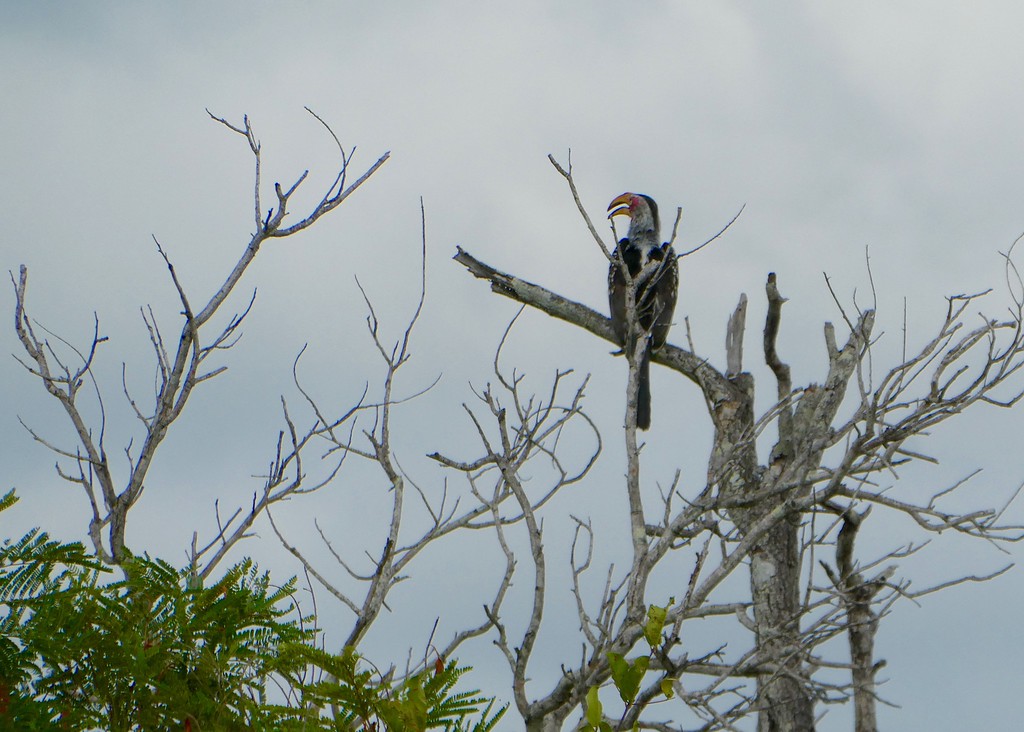 Dead tree, killed by animals ravaging the bark on the trunk during times of drought 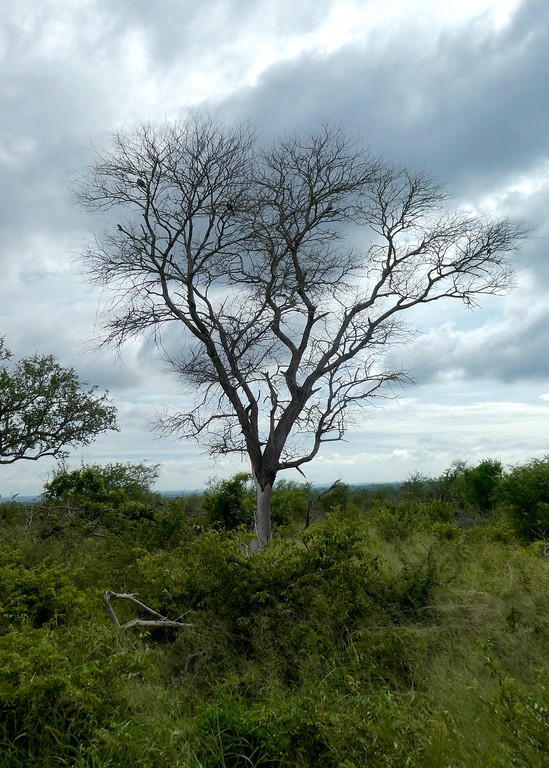 Lilac Breasted Roller (looks much prettier than this photo indicates)

The Grey Go-Away Bird (yes, that is what it is really called) 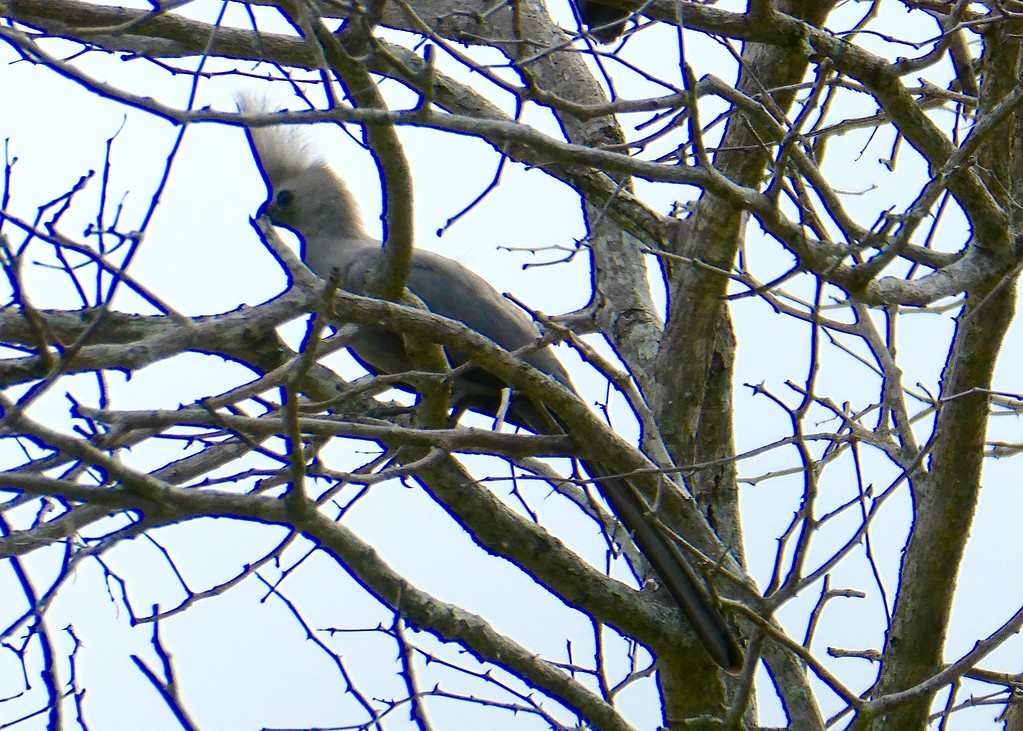 Our driver took us to the Nkuhlu Picnic Site, where we enjoyed a picnic meal that Ashbourne had provided for us. It was a pleasant location on the Skukusa River and our group broke up a bit, each enjoying their own personal space. There was a large gift shop on site as well and I took my time to stroll through it, picking up a souvenir T-shirt for Dan. Our break was over and it was time to head back to the truck for the second half of our morning.

An injured Cape buffalo in the Skukusa River 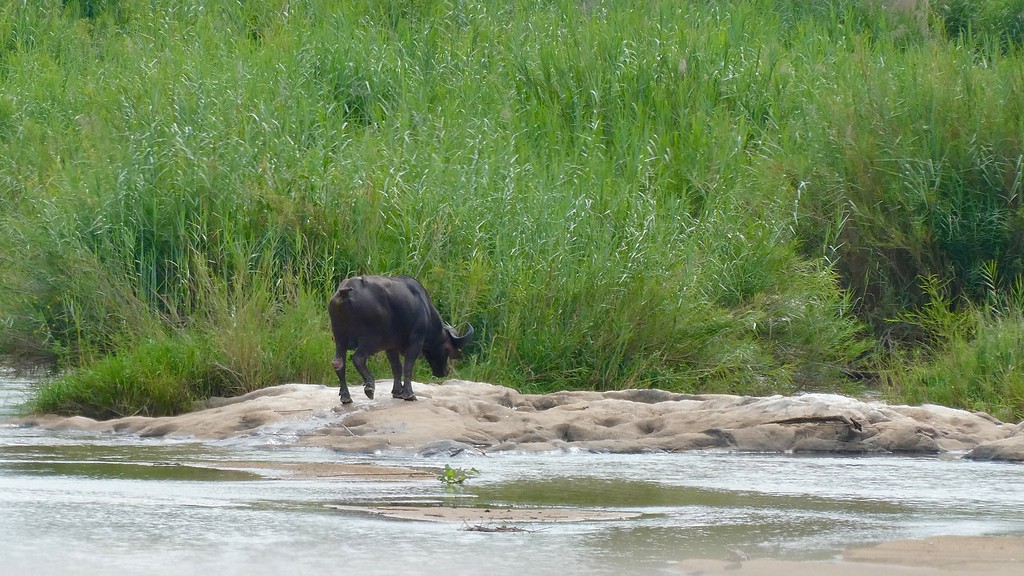 Right outside of Nkuhlu gates we found some animals hanging around

A party of shy Kudu horns

Yes, it was much harder to spot the wildlife here 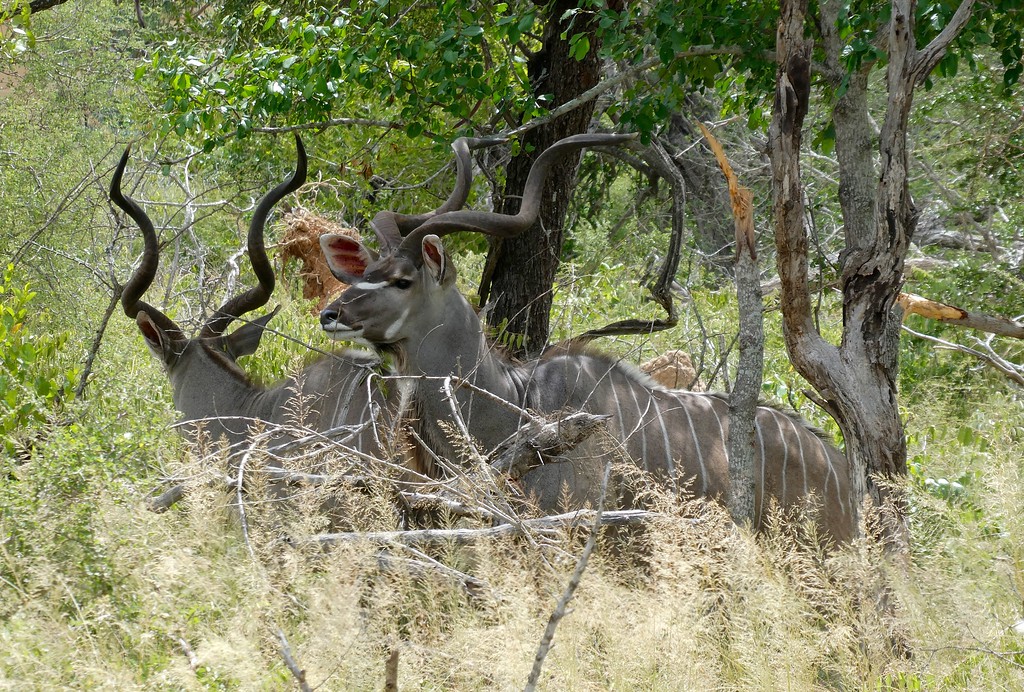 Who knows what was within 20 meters of us, but behind a bush? 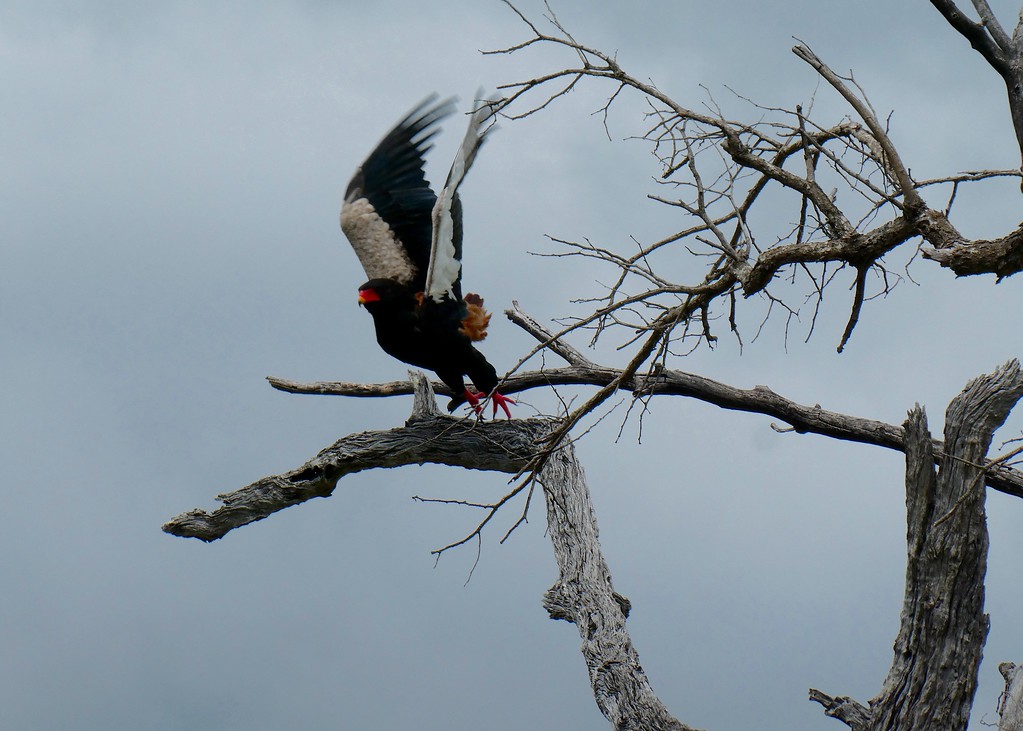 We ran through a smattering of rain a couple of times – excellent weather!

It looks like a set for a Disney play 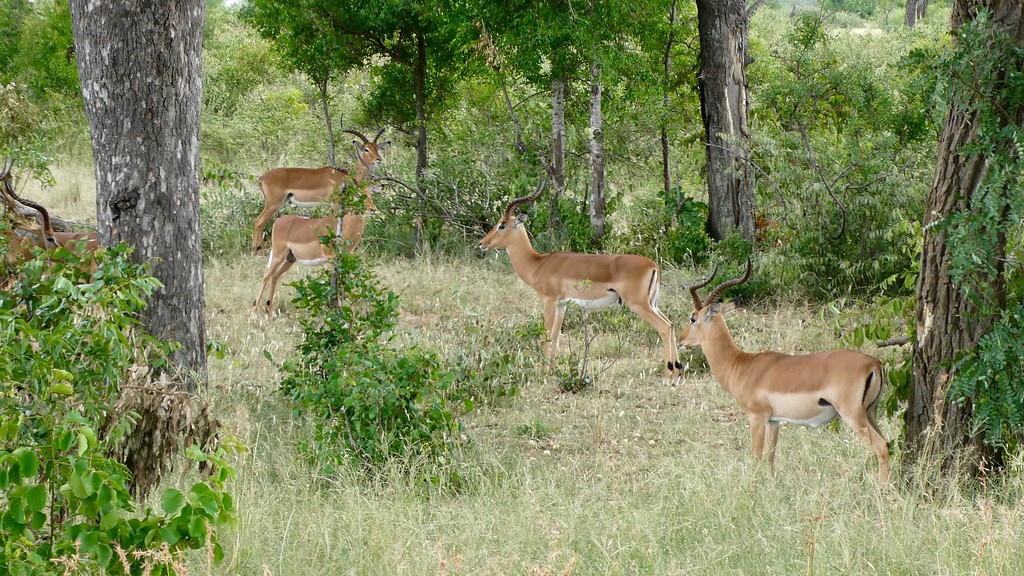 The Quelea: the most common bird in world – after the chicken (est 1.5 billion) 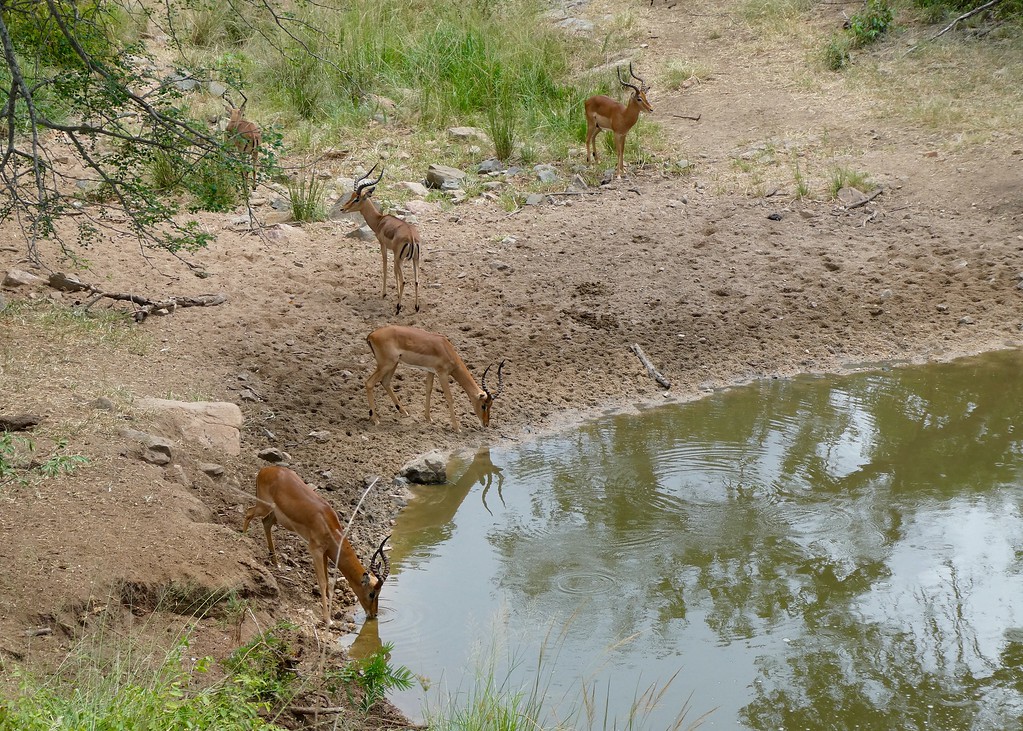 A little bit of everything (zebra, impala, wildebeest, warthog)

Our guide had another surprise for us: a larger pond in the park. When we arrived, we joined 3-4 other vehicles parked in an area that was clearly frequently used just for this purpose. But before parking, our guide pulled up to one of the private vehicles and proceeded to (politely) yell at the owner, who had gotten out of his car and was standing nearby. This would be a R1,500 (78 CHF) fine if the park police had caught him instead. The guy seemed surprised that this wasn’t allowed and sheepishly got into his car and drove away.

It was quite an active pool, with hippos, at least one crocodile and various birds. It was relaxing to watch the animals move within the scene.

Another Fish Eagle – this one has a fish 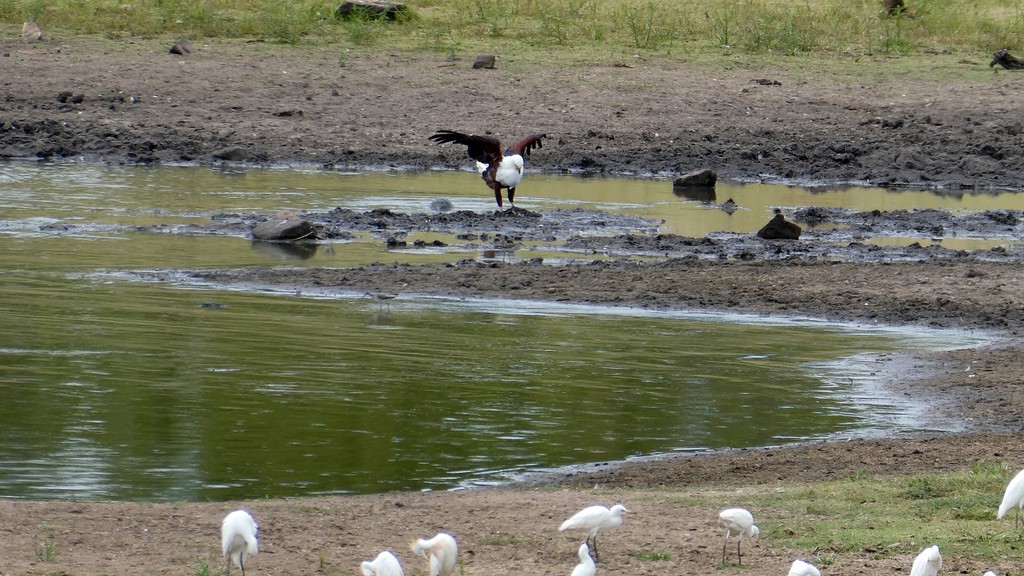 A Cape buffalo standing on the sidelines

I love the seed pods on this bush 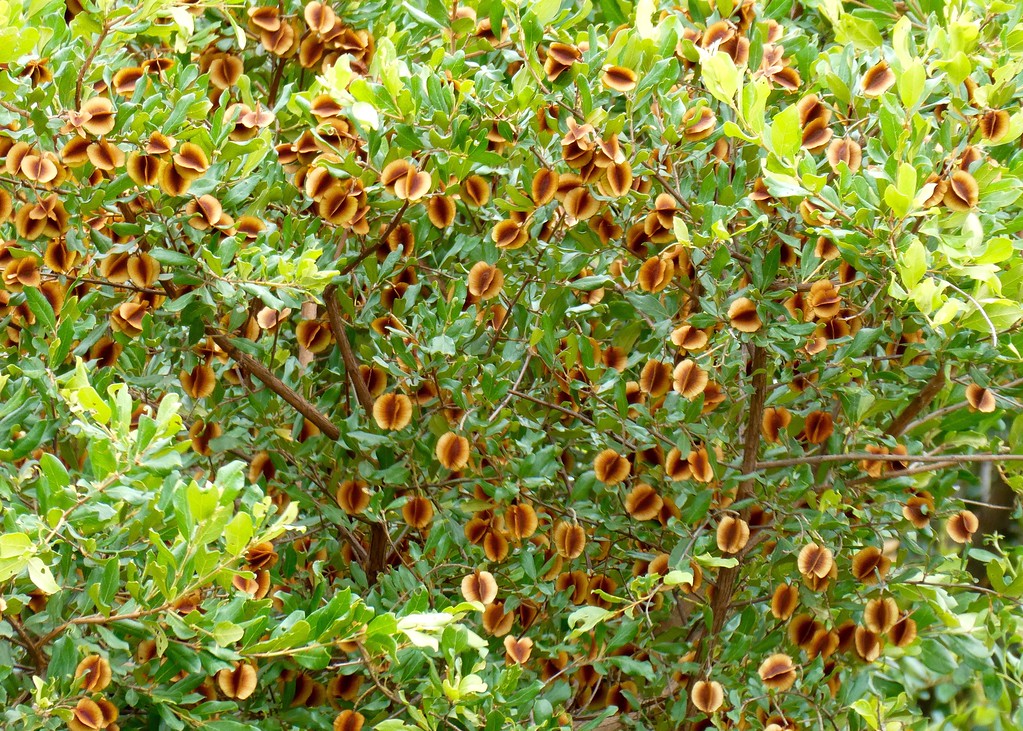 We were essentially heading out of the park when our guide had mentioned that some lions had been sighted in the area the previous day. We rolled along slowly, stopping periodically to take a closer look, but there was no luck. The lions might have very well still been there, but with grass cover like this, we never would have seen them. 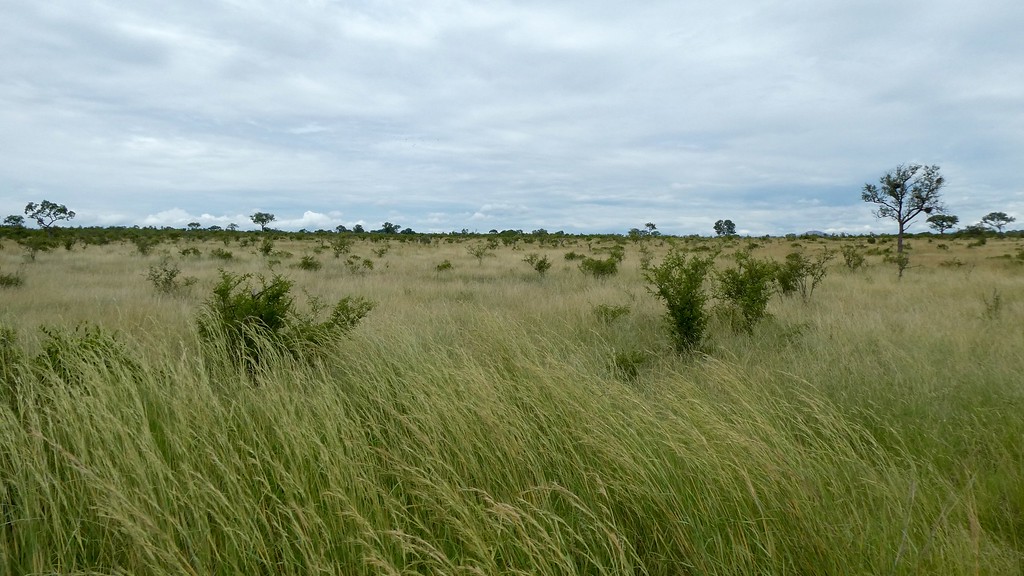 Leaving the lions to wherever they might be, we continued on our way out of the park. We saw a few more elephants along the way.

We watched this pair cross, and then pulled and stopped to watch them disappear into the bush 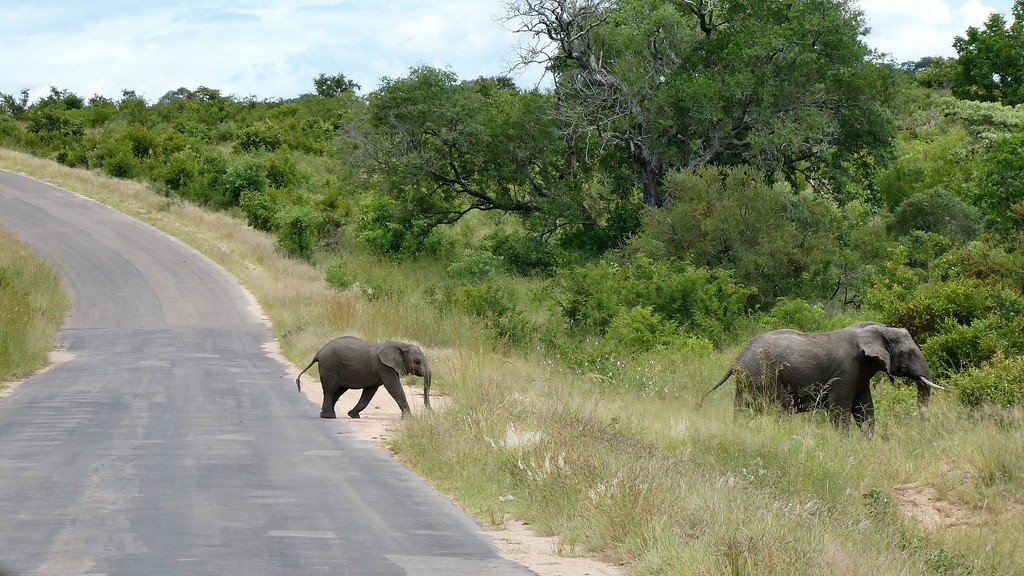 But unbeknownst to our driver, there was another baby coming – and we were in the way!

Heading back to Hazyview

Selling firewood on the roadside (the sellers were often just out of sight, in the shade) 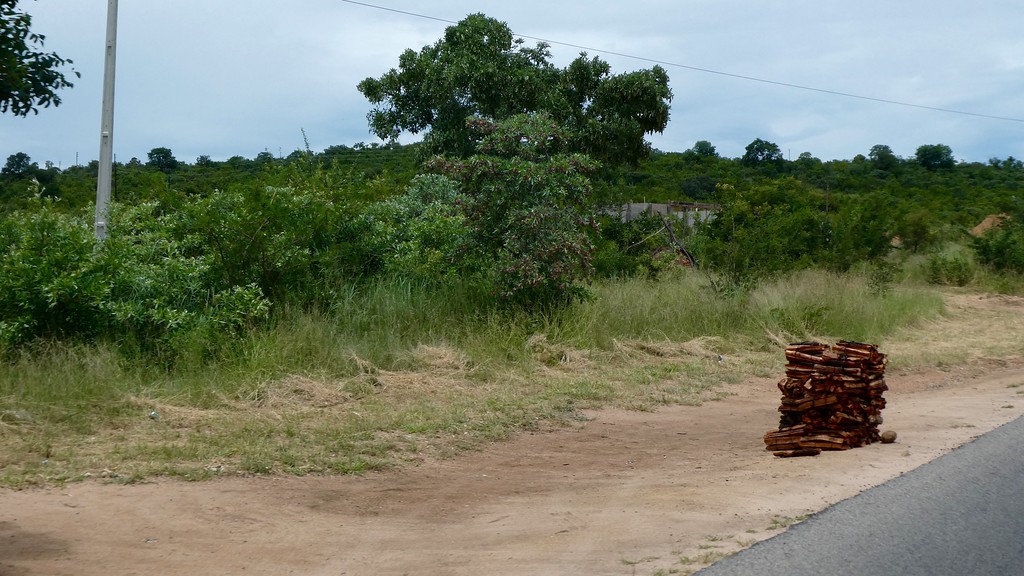 Imagine: all of that and it was only noon! Personally, I was glad that we had opted for the half day safari. It was pleasant to drive around and see the landscape and maybe spot an animal or two, but I wasn’t sure that I wanted to spend all day doing it. Instead, we were going to return to the peaceful comfort of Ashbourne and relax on what was really our last day of our South African motorcycle tour.

We all returned to the lodge and shortly afterwards, David and Rob offered to drive into Hazyview and pick up some pizzas. Pizza! Such a simple-yet-satisfying meal. A few of us waited by the pool for lunch to show up. There were actually six different pools on the property, although some of them were accessible only to certain rooms. But this one was a different pool than the one near our room. Instead, it was right near the lounge/bar area, faced east, and had a wonderful view.

After lunch most of us hung around the pool area for awhile longer, sharing photos and memories and reminding Jonathan to use the mosquito netting tonight. Eventually Dan and I went back to our room. I had a lot of organizing to do with our luggage, as tomorrow we’d be flying across the country and back to Cape Town.

While Dan rested in the sunroom, I took advantage of the quiet afternoon to learn more about the property from our hosts and explore some of the areas previously unseen. It was still awesome. I also lighted our load by offering Dan’s motorcycle helmet to Rob. He knew of some locals who would be thrilled to have it, even in the state that it was in. I guess a damaged helmet is better than no helmet at all, right?

Another beautiful sunset from our room

And another wonderful dinner 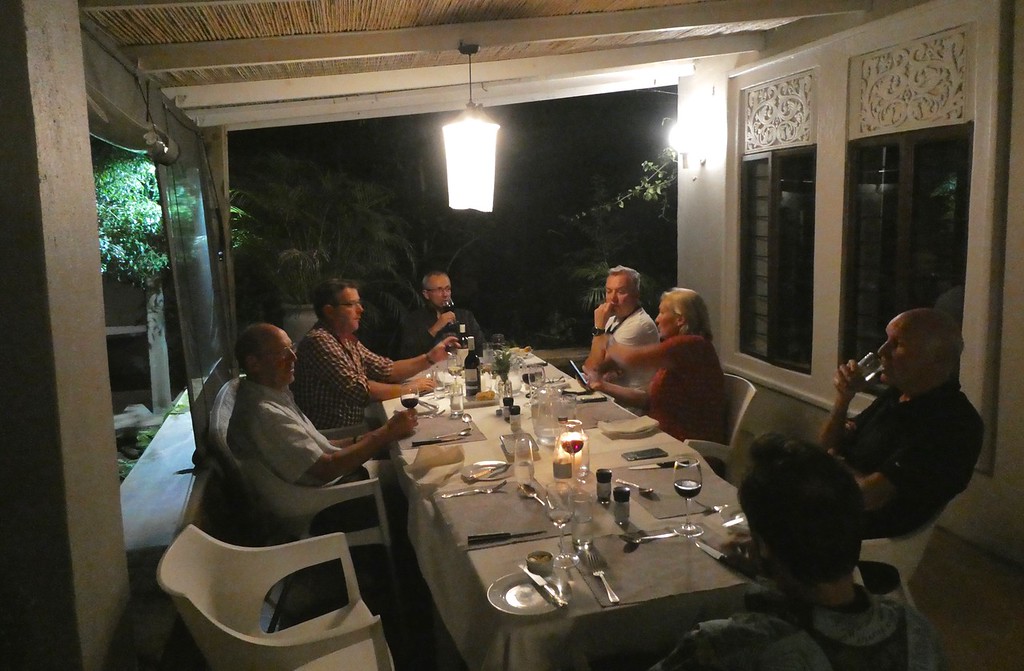 We weren’t the only ones eating well tonight!

Link to The End