I loved last night’s lodging! It was very cozy and comfortable, and I slept quite well. We had breakfast at 8 am at the restaurant on site and planned to leave right afterwards. We wanted to get to our next destination in time for lunch. It would be another short day of riding, and with the humidity levels and temperatures this morning already, I was only too glad to hear it.

Leaving The Fernery behind 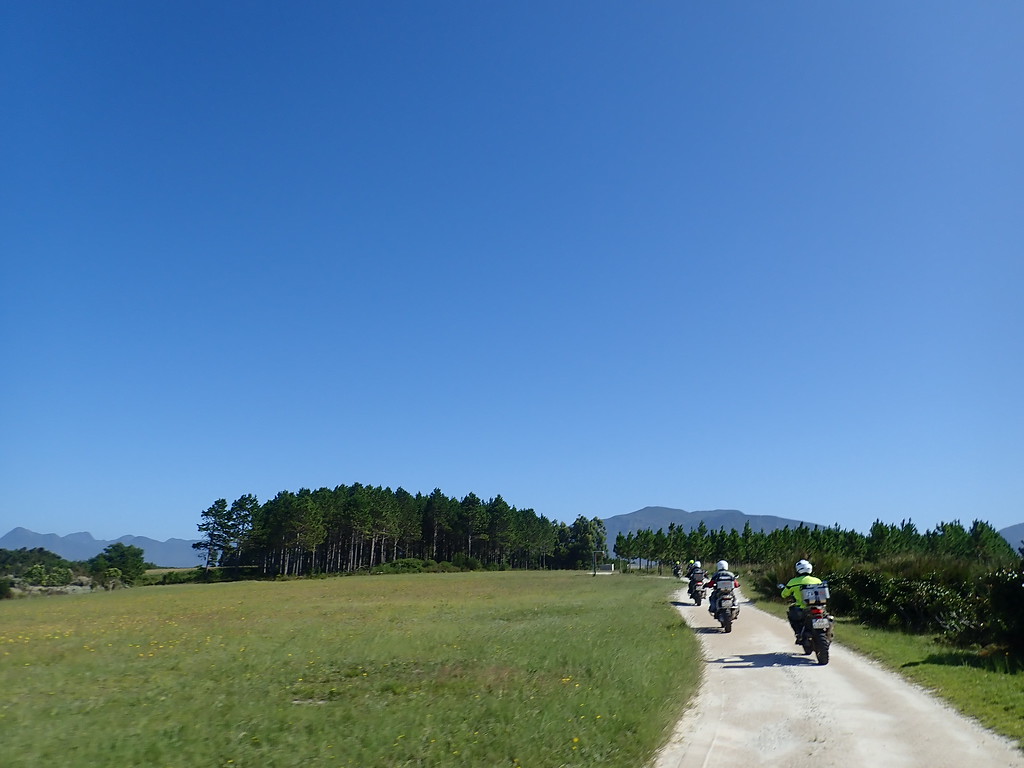 I noticed that throughout South Africa there was always someone walking or standing along the roadsides. Many kids walked along the roads in their school uniforms, making their way home from classes in the late afternoon. The kids were almost always excited to see us ride by, with many waves and cheers greeting our odd caravan. The adults also seemed pleased to see us, especially out in the countryside. The shepherds in particular were quick to wave. There were also people who stood at the side of the road in hopes of either someone stopping to pick them up or at least one of the numerous shuttle vans would come and get them. It seemed like a good system for a country that otherwise had a severe lack of public transit infrastructure.

Hitching a ride at the side of the road 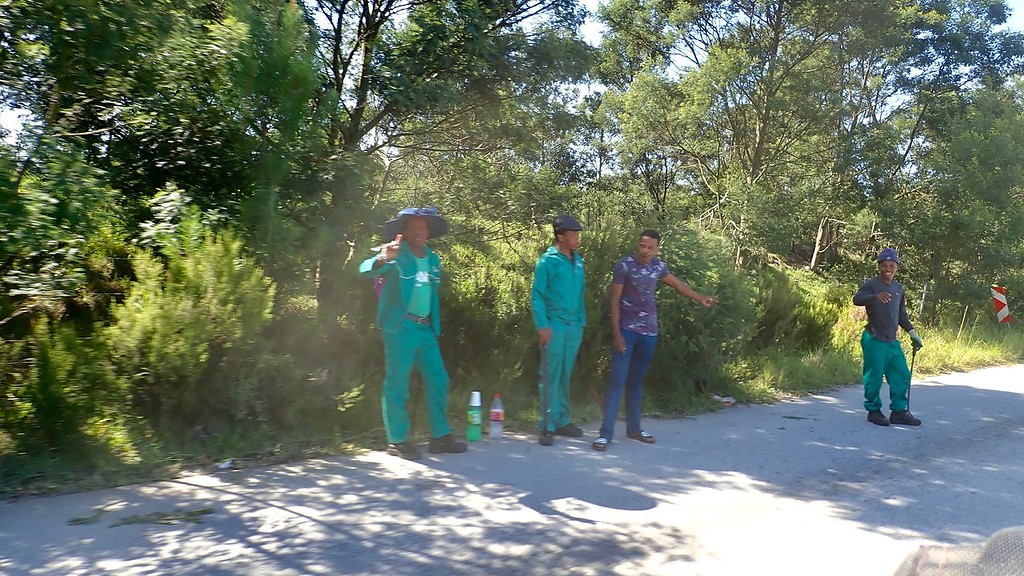 We were back on the toll road, but only for a short time. The temperature gauge on the bike’s instrument display was rising. So far it had only gone from 27 C to 28 C, but I got the sense that it was going to continue to go up.

Large (controlled?) fire as we turn away from the coast 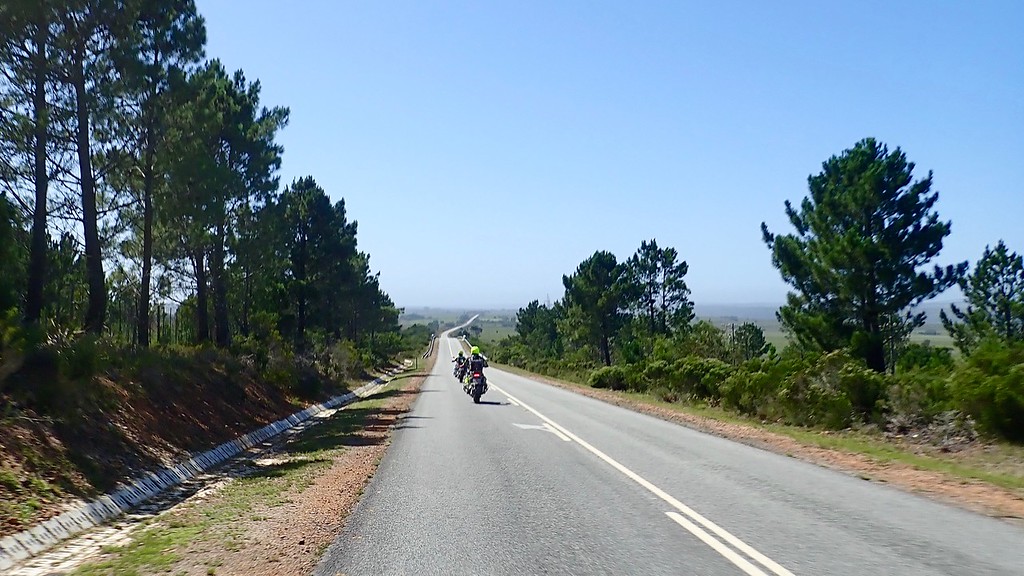 I found these trees interesting: they had the basic tree shape, and then an extra level of branches above

We stopped for gas at the wonderfully named town of “Humansdorp,” and had a quick coffee in the attached Wimpy’s Burger. I had heard of Wimpy’s before but didn’t know much about it. I think that I associate it with “Wimpy” of Popeye fame – not that that really means anything. They had the usual fast food menu though, and plenty of coffee selections for the coffee connoisseurs among us.

There were a lot of people milling around near the gas station. It was payday and many of them looked dressed up for the occasion. They also lined up for blocks, presumably to cash their pay checks. I heard that it was a bad time to be on the road, as they tended to celebrate payday with a few drinks. Well, we’d be off the road in another hour or two, so hopefully we’d be safe.

Evidence of “The Garden Route”: many citrus orchards 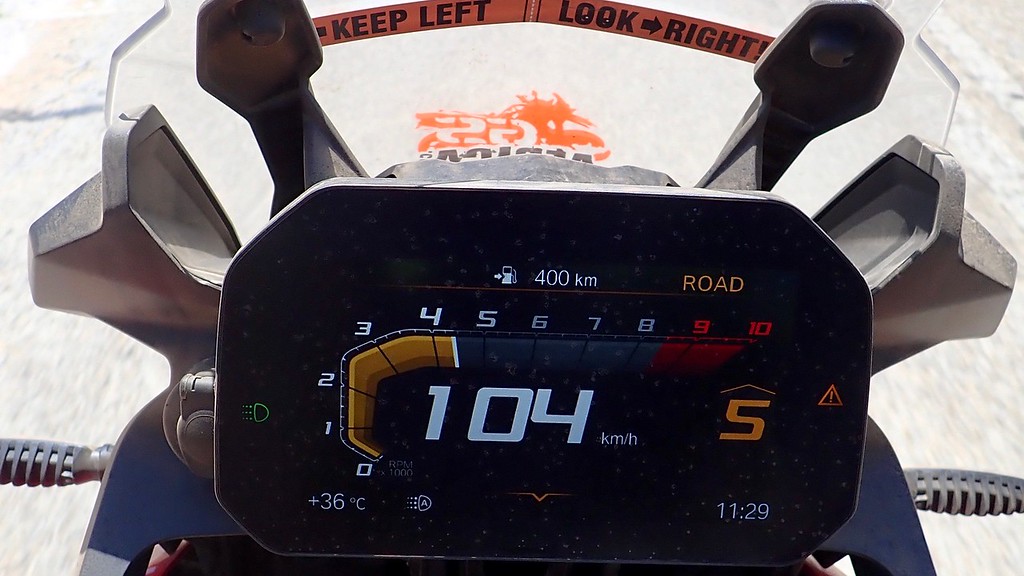 As long as we kept moving, the heat didn’t seem so bad. The scenery was green with open, rolling hills and it was pleasant to ride through. It wasn’t challenging and the views were nice, but not overly interesting.

That all changed when we reached the outskirts of the town of Uitenhage.

Something serious had happened here, and recently, too. There were numerous blackened lines across the road, the remains of a road block created to “disrupt funeral processions until the paving of Siwani Street is complete. Over 400 mourners were stopped from using Matanzima Road on Thursday afternoon, as about 100 protesters blocked it with rubble.” The shacks that I could see looked empty in the midday heat, with the exception of three people who appeared to be building something

Two of many burn marks on the road

Selling food on the side of the road 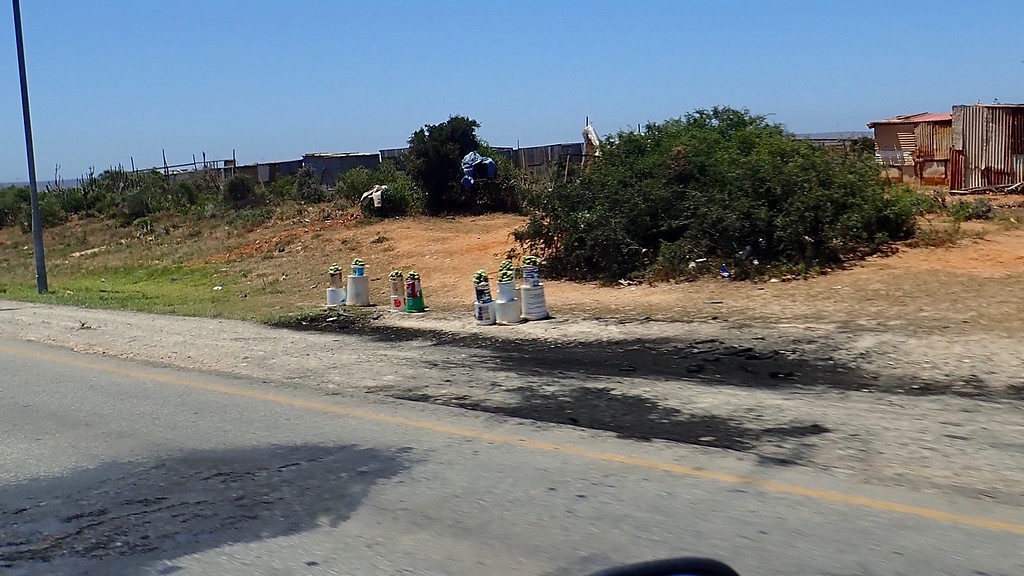 This region seems to have a lot of problems, based on what I found while researching the reason for the above protests. I found article headlines such as:
– “Uitenhage residents want their pothole left alone – Land occupiers use water from the pothole for bathing and boil it for cooking”
– “Protesters say councillor’s office will remain closed until their toilets are cleaned – Uitenhage residents say seven toilets for 500 people are “full of faeces” and unusable”
– “Pigs feast on human excrement as township drain overflows”

It seems like the region is the plagued with social problems.

Meanwhile, the temperature was still climbing

Rolling through a quiet town 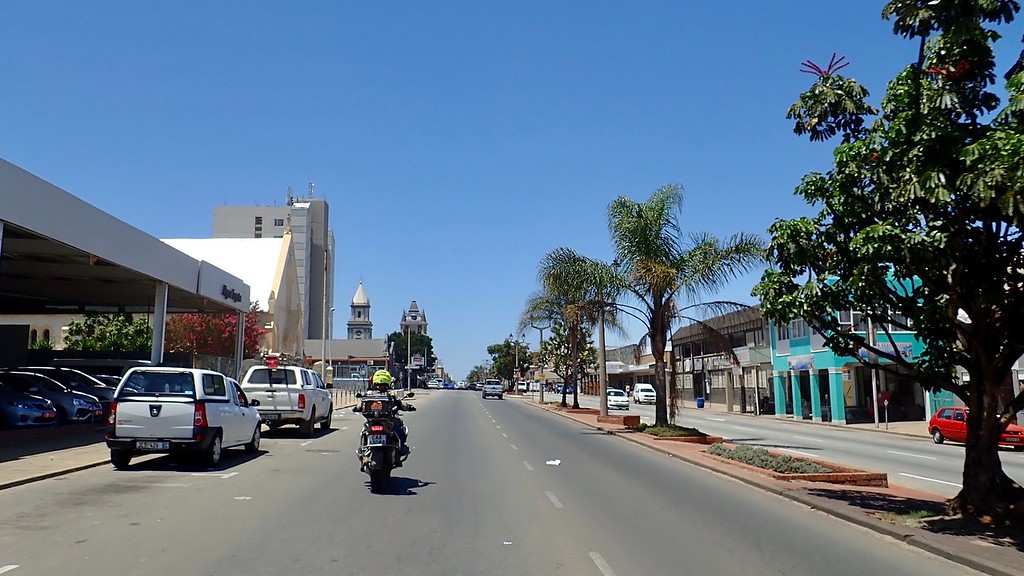 And not a moment too soon! 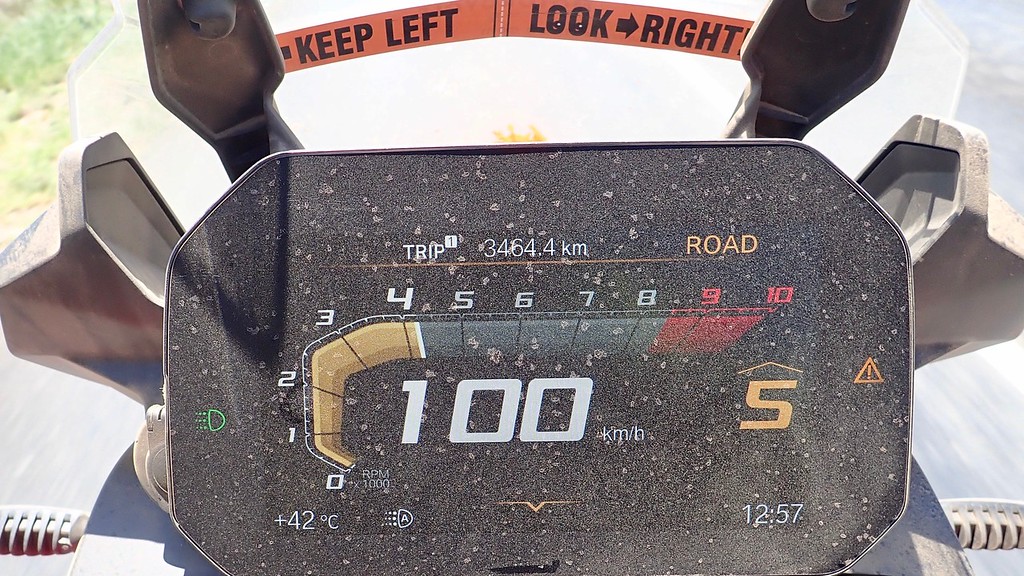 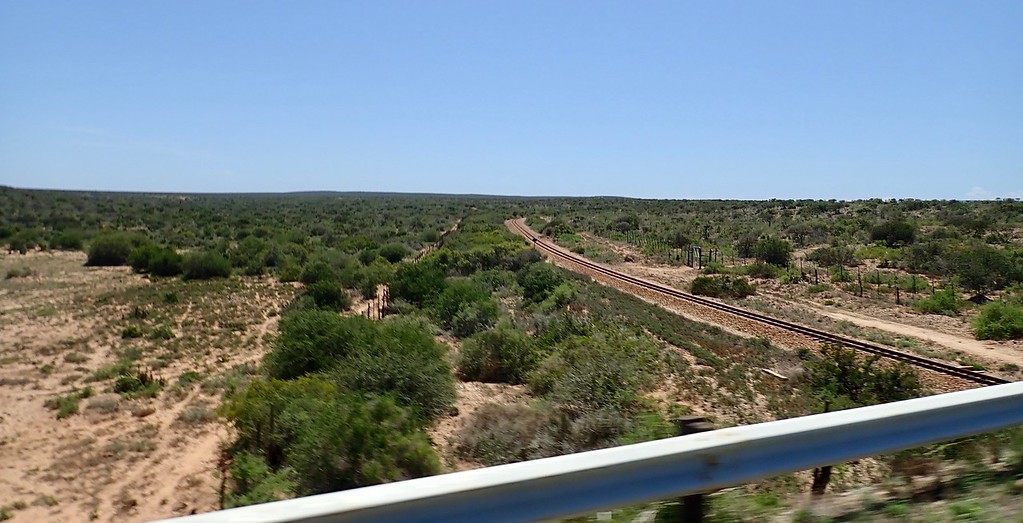 We turned off the main road, crossed those narrow gauge tracks and reached the entrance to Addo Elephant Park. We had arrived!

Hana arranged for our entry through the gates (check out those massive elephant skulls!) and we pulled ahead. But it turned out that we weren’t done yet. The plan was to have lunch, leave the bikes here inside the park, and hitch a ride on a safari truck to our accommodations at River Bend Lodge.

Lunch was good and our driver was waiting for us by the time we were done. Because River Bend Lodge is a private game reserve outside of the park, and the long drive to the safety of the lodge buildings passed through the animals’ territory, we were not allowed to ride our motorcycles within the grounds. For this reason, we needed a ride.

I’m not sure what sort of deal Hana and David have worked out, but the bikes stay here 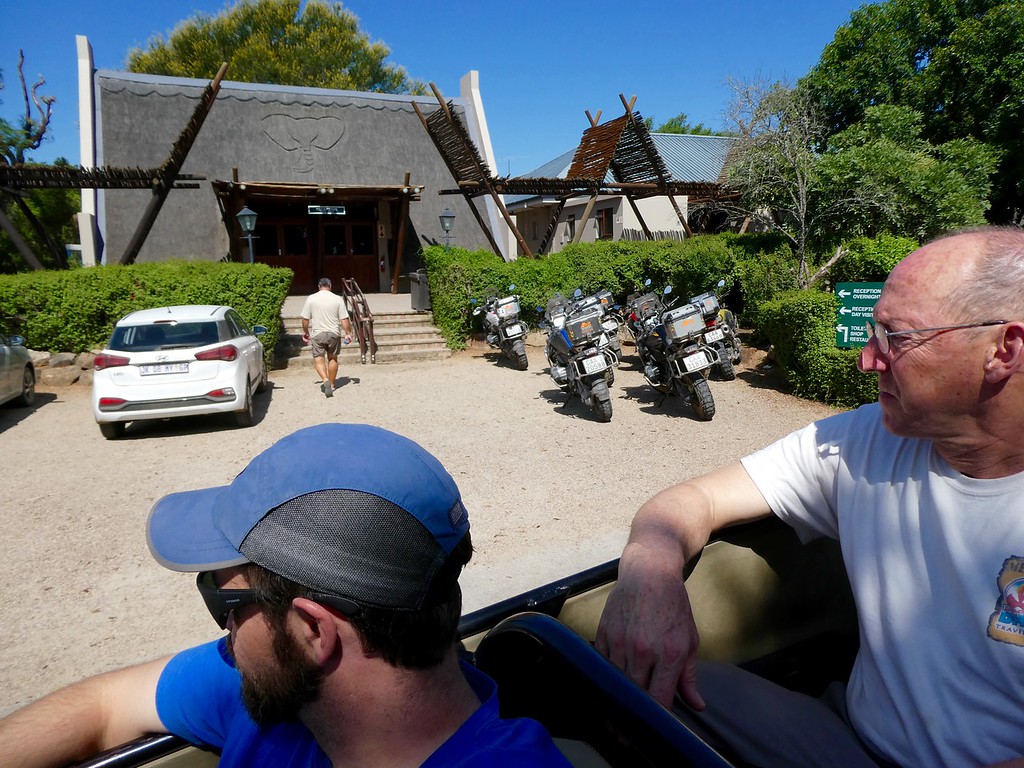 The gates to River Bend Lodge

This is why we are not riding here! 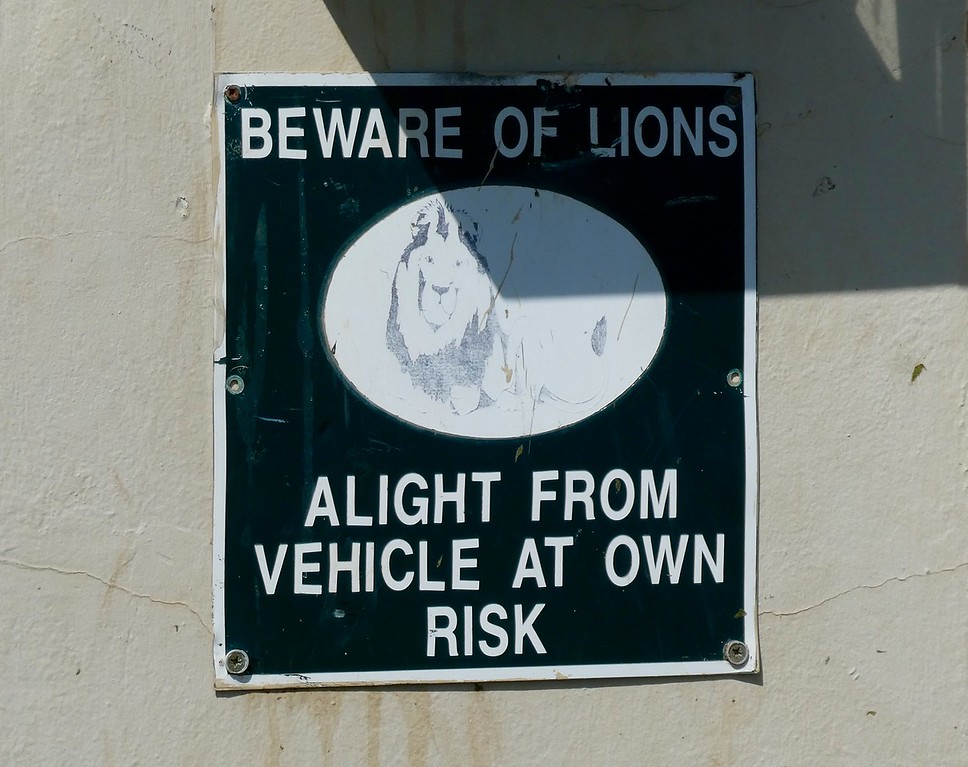 “Show me your best side” 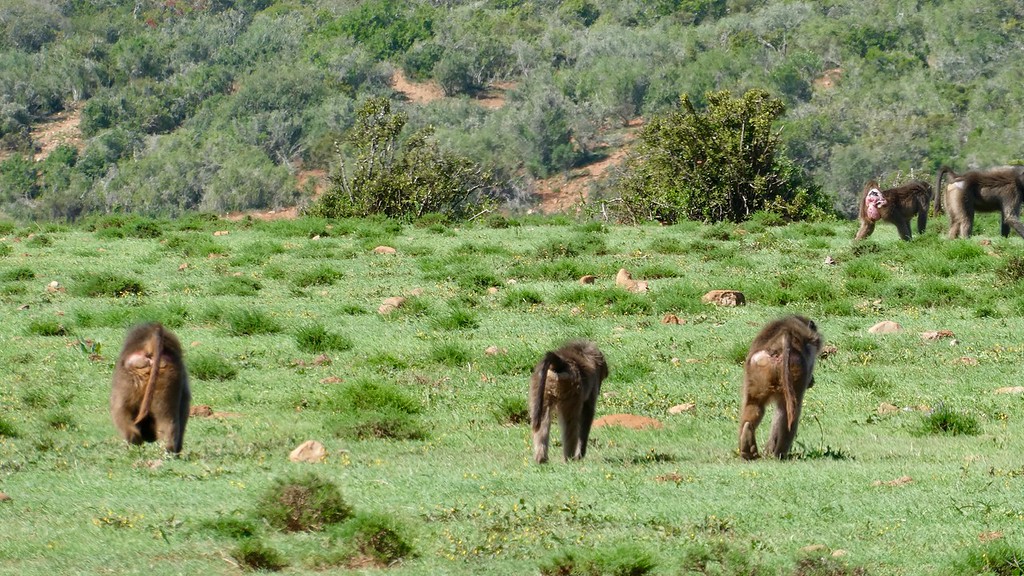 The lodges at River Bend

There was another gate to pass through and now we were “safe” inside an electrified fence. This fence made sure that the lions, baboons and other animals did not disturb us while we were spoiling ourselves in the pool or dining at the restaurant. The fence was subtle enough that we could easily watch the elephants stroll by, elands graze and the monkeys play in the fields.

Set on its own private 14,000 hectacre within the heart of SANPark’s “Big 5” Addo Elephant National Park, River Bend Lodge is known for colonial grace and luxury. The main building is a restored Eastern Cape farmhouse, with the original trees and vegetation still covering the landscape. Newer buildings had been built in a comfortable array around the property, giving each suite privacy while still keeping the overall footprint to a minimum.

A view of the grounds 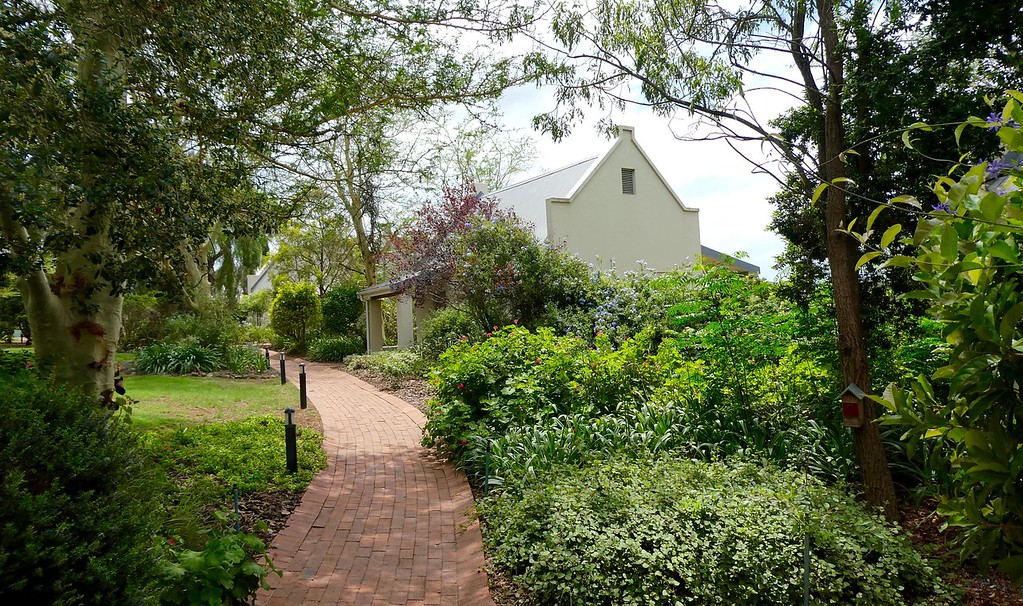 This bed is almost bigger than our bedroom at home! 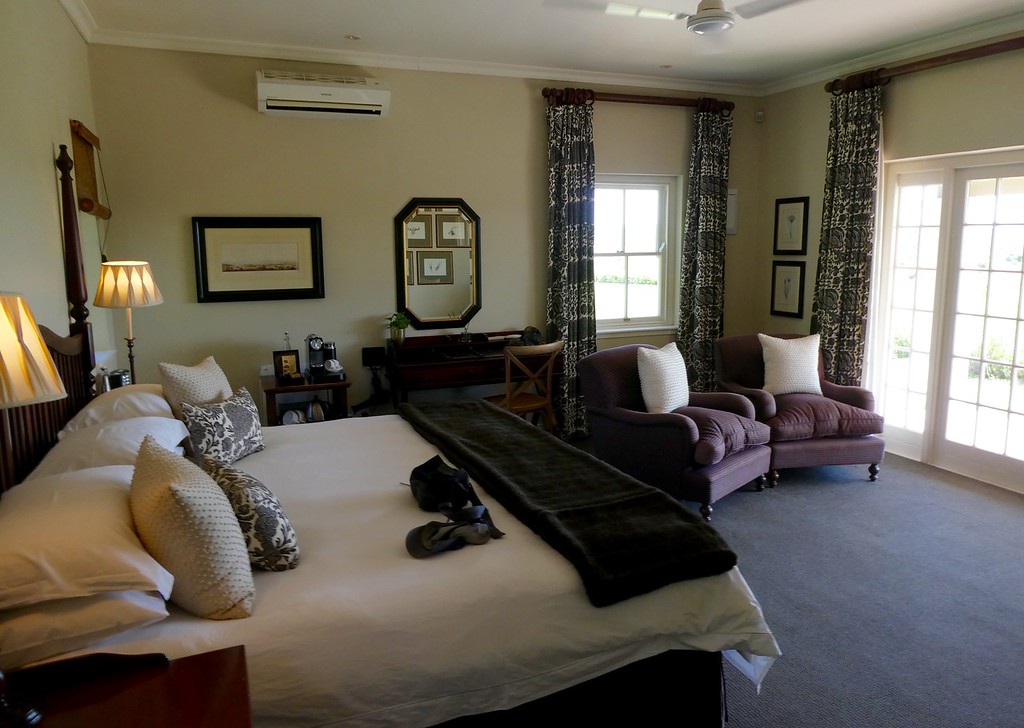 We dropped off our gear and bags, sorted out a bag of laundry that the staff would process for us, and put on some clean (and cool!) clothes after taking a refreshing shower – in our private outdoor shower, of course! I really had gone overboard in choosing this particular tour. I never expected this extravagant level of luxury. But hey: a person only celebrates turning 50 once in their life, right?

A very short tour of the grounds led us to the pool, which was the perfect place to relax in the afternoon heat

The electric fence doesn’t keep everyone out (but they never came close to us, that I noticed)

Seats for viewing elephants at the waterhole

It was a relaxing afternoon. Some rested in their rooms, some used the time to call family members, and some of us sat in the shade and enjoyed a cool beverage and conversation. Dinner wasn’t going to be until much later – close to sunset, actually – so we had plenty of time to ourselves and it was nice not to have “something on the agenda”.

I zoomed in on a train in the distance – 4x engines, many, many, many cars; coal for the local energy plant? 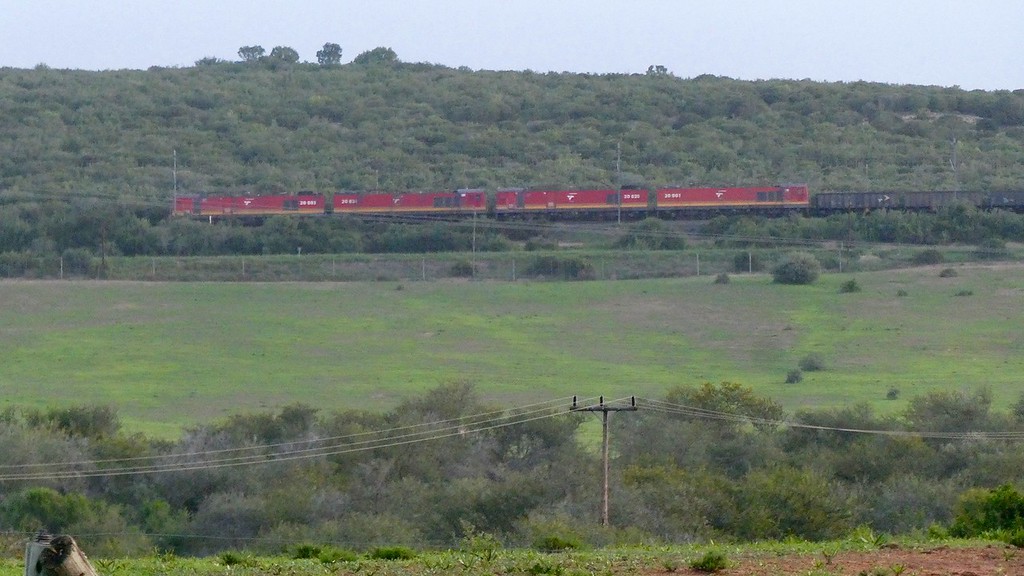 A quick check of the waterhole before dinner

When we sat down for our meal, the staff handed us our menus and inside was a personlized letter to each of us, welcoming us to River Bend. It was a nice touch, even if they did misspell my name. Our servers were egnimatic and friendly. I noticed for the first time that instead of saying “You’re welcome”, they said “Pleasure”. Which lead to exchanges like:

“The meal was fantastic!”
“Pleasure”

It was a nice change to the usual phrase.

We were studying the menu when the lights went out. Needless to say, we were surprised. But the staff weren’t – apparently this happens every night between 7 and 9 pm. The country cannot supply enough electricity for everyone, so various areas are shut down (“load shedding”) at regular intervals. It seemed like an inconvenience that should not be tolerated by the populace, but the government was too strapped for cash to “fix it”. I had seen some wind turbines on this trip, but the cost of them was too high to offer any serious coverage. It really is a shame, considering the constant and strong winds that we had experienced so far.

The staff brought out electric lanterns so that we could order our dishes and later, see what we were eating. The meal was fantastic, with a lovely variety of dishes on offer. By the time we finished our meal (and dessert, of course), the electricity had been restored. We said our good nights early, as we had plans for an early morning: a 5:30 am game drive!