Our lodging offered us a wonderful sit down breakfast, which was hurried due to an early departure in order to avoid afternoon rains. Dan was in good spirits although relying on his drugs to keep him moving comfortably. I brought out our bags to the truck, we all got geared up and with Dan once again keeping David company, we pulled out of Piet Relief.

The morning was already warm and humid, and the scenery out of Piet Relief wasn’t all that interesting. Monoculture forests bounded both sides of the road for miles, with any change being the recent cuts of those same forests. Logging was indeed the dominant industry here.

When there weren’t trees blocking the view, the view was quite pleasant. The roads here were open and comfortable, although the humidity did dampen my spirits (not really – I just couldn’t resist the pun).

Our time in South Africa was short this morning: we were about to enter the Kingdom of Swaziland. The country has since changed its name to “Eswatini“, but I’ll probably continue to refer to it as Swaziland out of habit. The only thing I could anticipate in entering the new country was what Hana told me: it is much more tropical, with more jungle-like vegetation. OK! This should be interesting to see.

Logging trucks at the border

In talking to someone at the border, we learned that the trees are cut in South Africa, driven into Swaziland for pulp and processing, and then the materials brought back to South Africa. It seemed like a convoluted process.

We stopped at the South African border for an exit stamp in our passports, and then proceeded to the border office to cross into Swaziland. The process was fairly simply, but it took us a long time. The outbreak of Covid-19 in Wuhan, China had been going on for a couple of weeks but thus far it was easy to think of it as a “Chinese problem” and unaware of the far-reaching effects it would have. Even so, the first step at the border crossing was to have our temperatures checked. I was admittedly a little worried because I was really warm due to the outside temperature and wearing all my gear, but apparently my internal temperature was just fine.

Then I needed the motorcycle rental papers from Hana so I could have a slip of paper filled out by the person behind the window. And that person also took my passport to stamp – except that they were having a hard time finding the South African exit stamp. Everyone in our group was having the same problem. A couple of the guys in front of me managed to locate the South African stamp and once the Swaziland stamp holder realized just what he should be looking for, he was able to more readily locate it on the rest of our passports. Whew! Next was a different Swaziland window where we paid (“Hana paid”) 100 Rand road tax (per bike).

While we waited for the whole group to be processed, Jonathan, Dan and I stood near the door and spoke with a South African trucker. He was the one who had told us about the logging industry here, and was very friendly and happy to answer our questions. Oh, and by the door was another point of interest: a large box of condoms. It is estimated that 26% of the adult population in Swaziland is HIV-positive. It was good of the government to provide some protection for both visitors and citizens alike.

With our slips of paper in hand, we walked across to another government building and stood in line again. This time the process was to hand over the slip of paper to be stamped by the person behind the window. Stamped slip in hand, we exited the building and handed the stamped slips to yet another guard who was standing outside. Only then were we free to get on our bikes and enter the country. I’m not sure if the whole process is so complex to reduce corruption or to make jobs.

Swaziland – not terribly different so far

A round house with four “wings”? Someone suggested that it is a church

I approve of the ingenuity used here

There were a number of billboards along this theme

In just a few minutes we had reached the other end of the logging process. It was a massive operation and full of activity as we passed by. 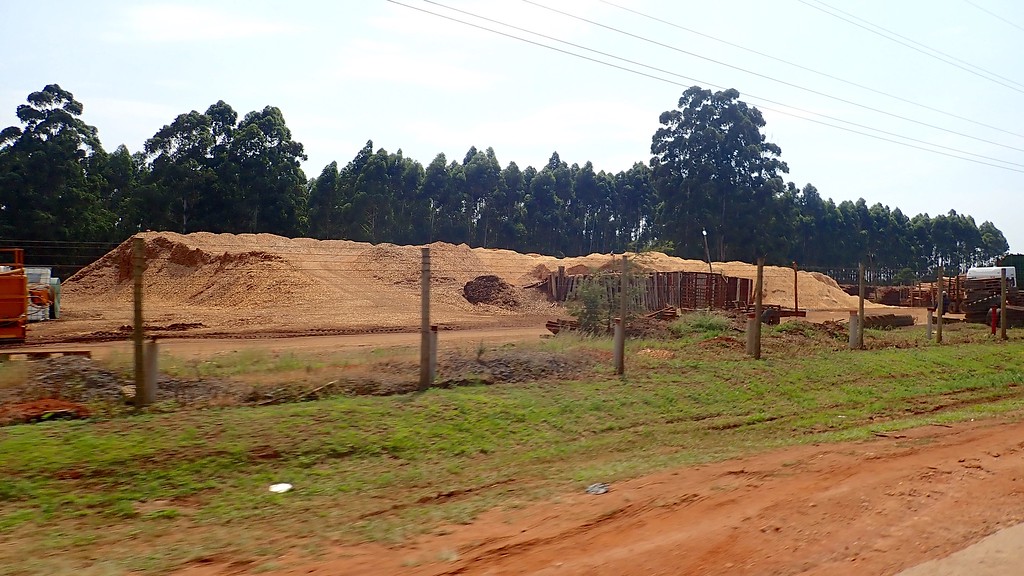 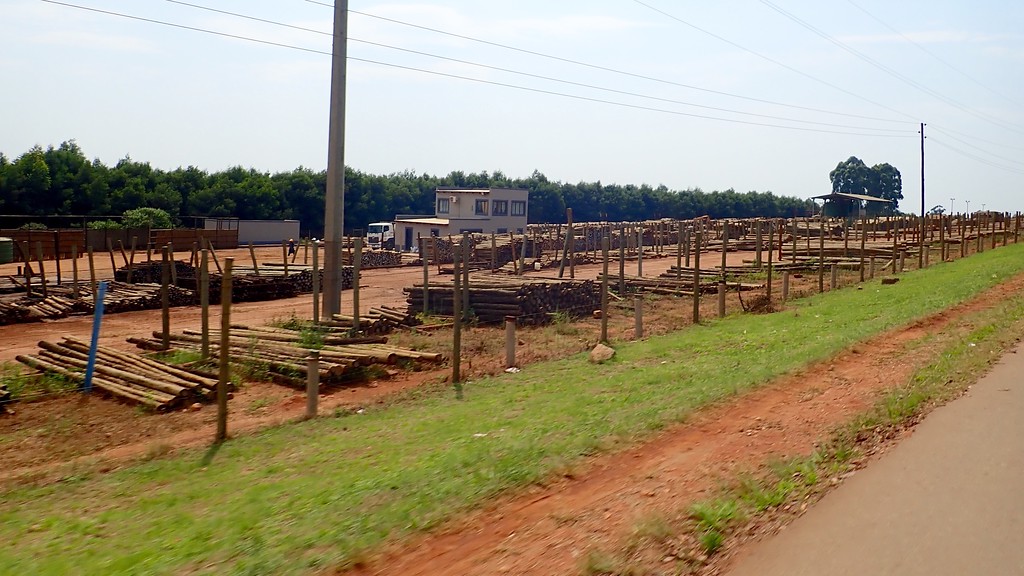 My first impression of Swaziland was pretty much “Hmmm – not much different than South Africa.” But as we followed the roads I noticed subtle differences. The disparity between the houses was greater: the houses that weren’t that nice were “less nice”, but there were more fancy houses. The billboards gave me the impression that it was a society that wanted to better itself. Kids still wore uniforms for school and still waved at us when we rode by. I wouldn’t get to make too many more discoveries: we were already almost to our lodging for the night; it was a half day of riding with an afternoon to ourselves. 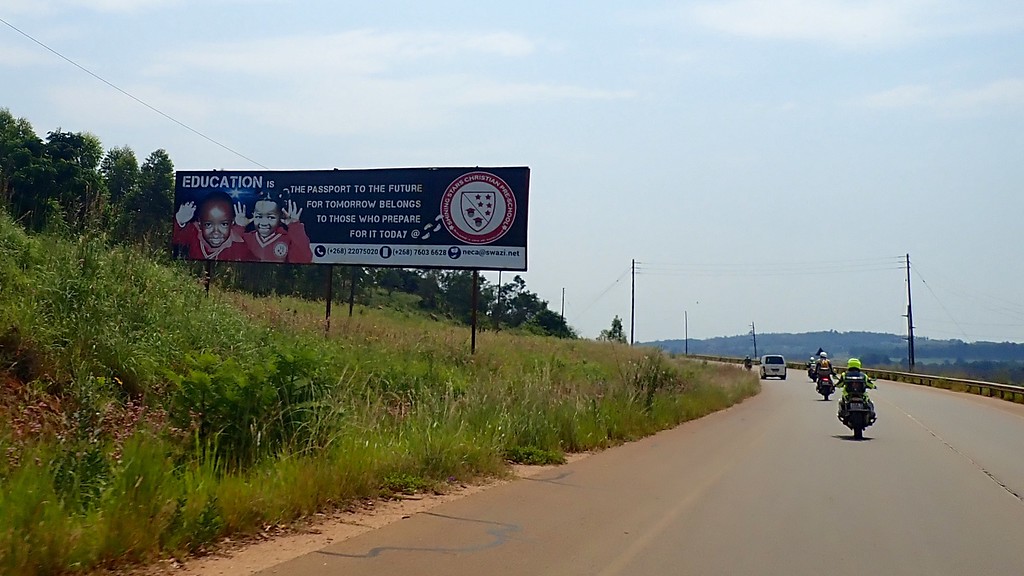 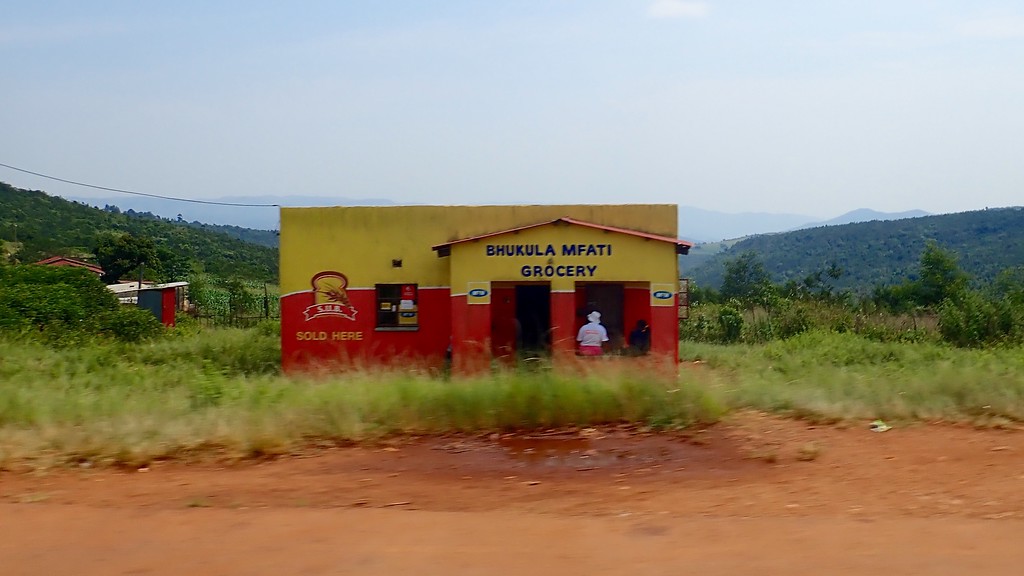 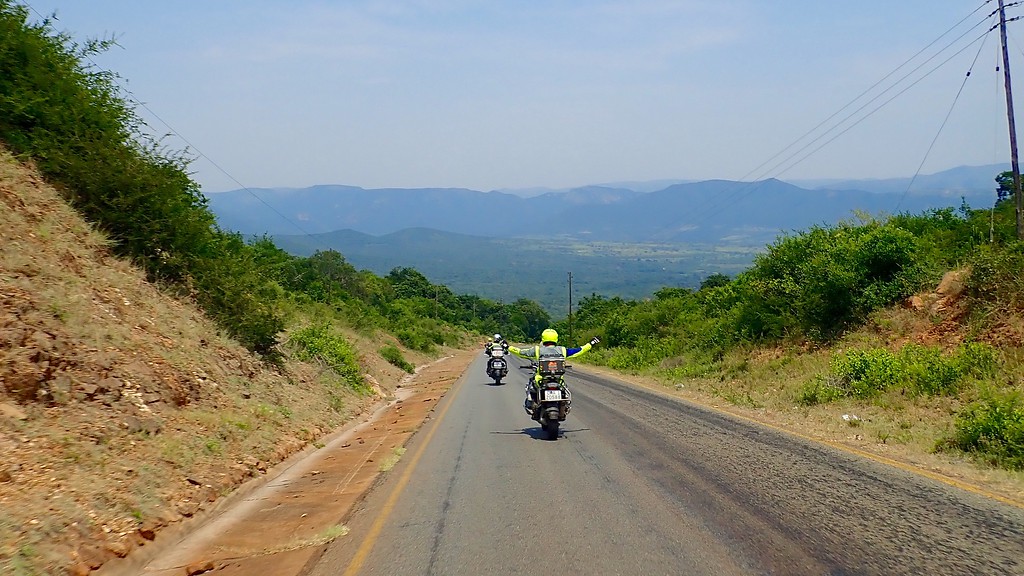 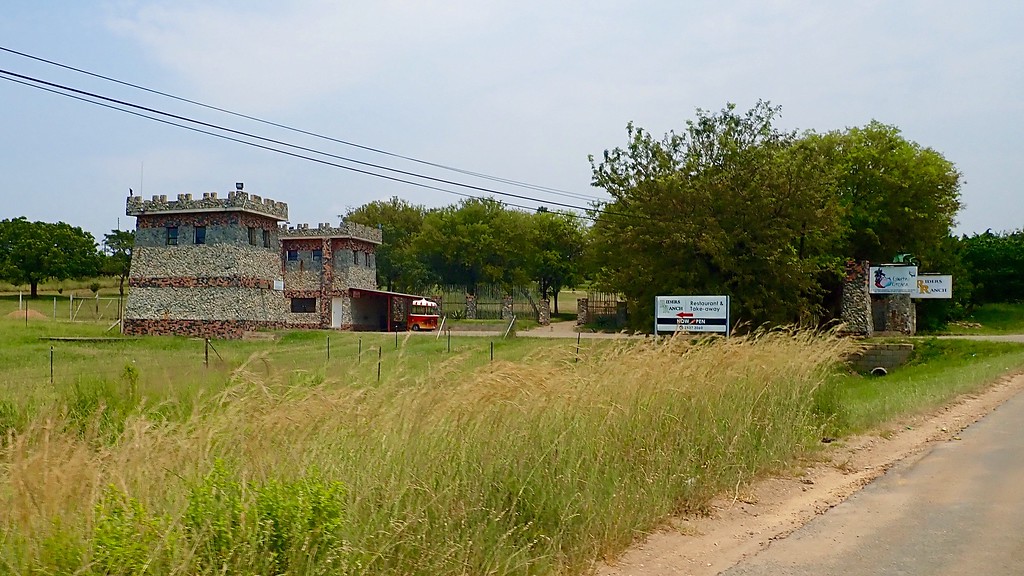 Dan and I consider the joys of self-employment

But decided to leave it to the professionals

Satellite dishes for EVERYBODY! 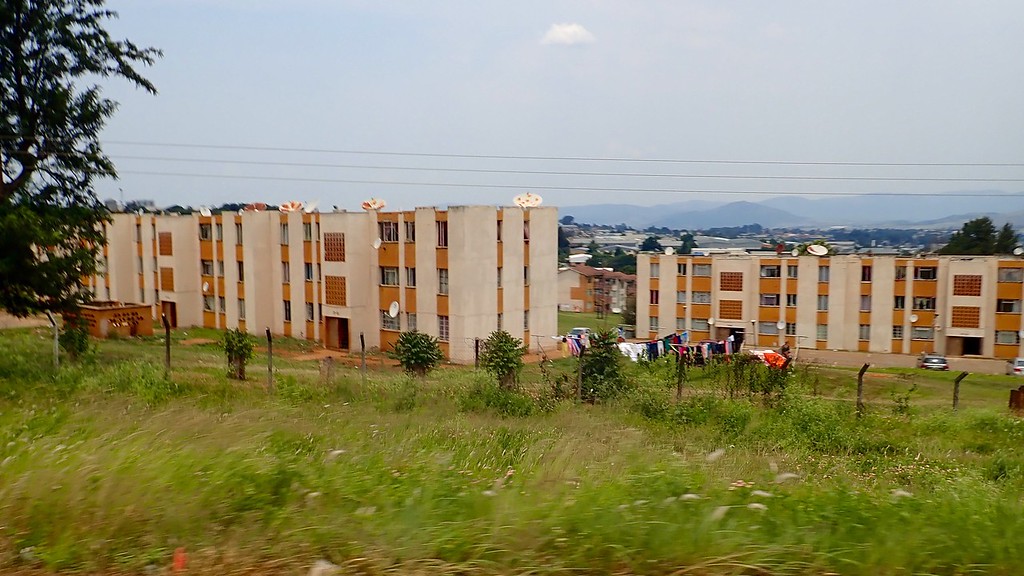 We had left South Africa promptly this morning because there was rain forecasted for later today. It was humid enough that I just wished that it would rain anyway. But we were almost there – the rain could hold off a little longer, right?

The rain had held off – we had reached Malandela’s with enough time to unload the bikes and get our rooms before the first drops fell. We agreed to drop off our stuff, take a break and then have a nice lunch together.

Malandela’s Guest House from the road 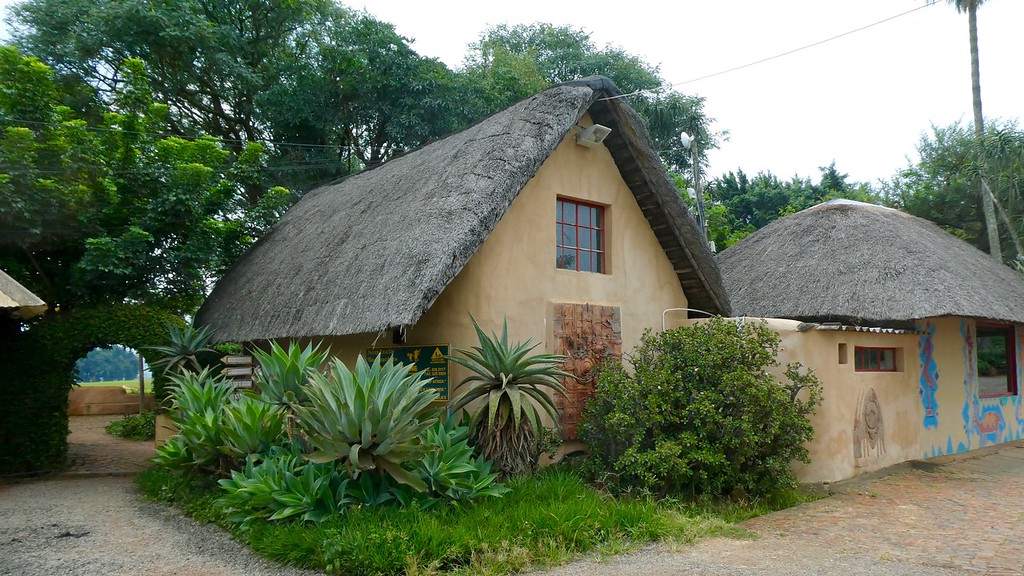 Wonderfully simple and comfortable inside 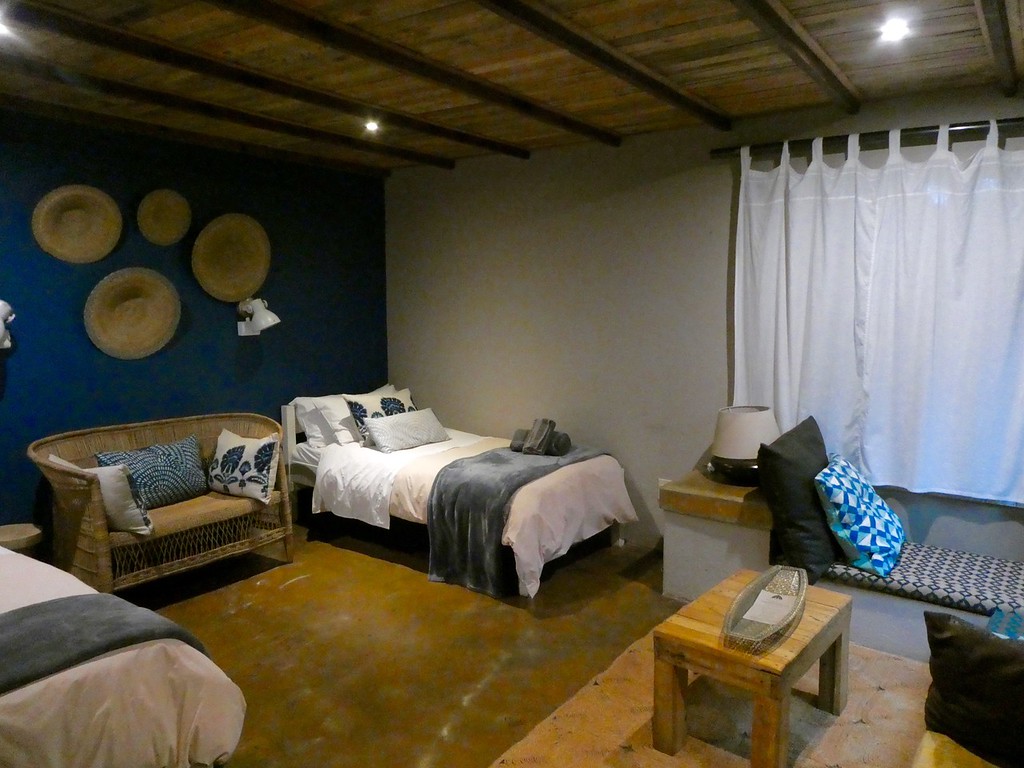 Lunch under the vines 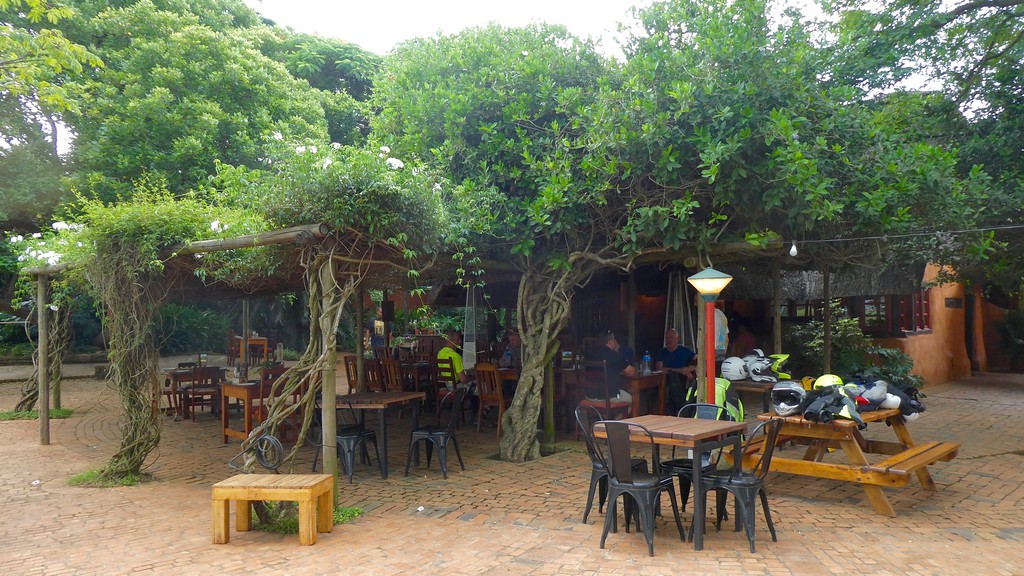 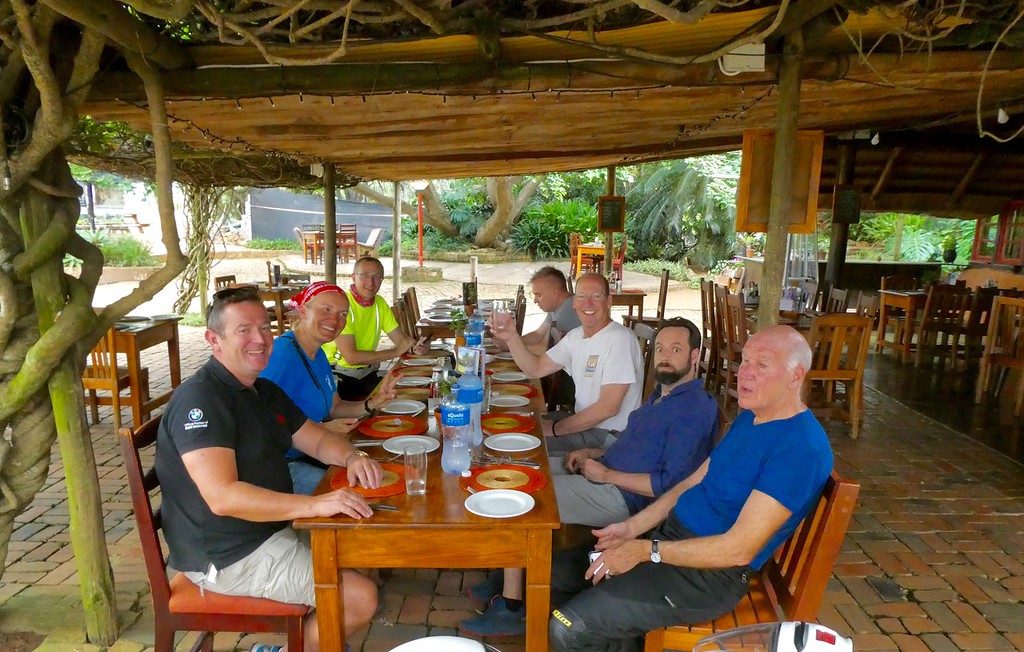 Lunch was fantastic but once the food was gone, the group wandered off to their individual rooms and their own personal activities. For Dan and I, we went back to our room, where I made him comfortable before going back outside to explore the grounds. Thunder was rolling in the distance and I could see more rain on the horizon – I wanted to walk around before the humidity was completely replaced by rain.

Much to no one’s surprise, the power went out shortly after lunch. However, this turned out to be not a power supply problem, but a unique problem due to the storm. No one on the grounds knew when the electricity would come back, so I took advantage of the daylight and went out to explore.

The grounds were … unique. The man who started this place back in 1976, Peter “Malandela” Thorne, had fallen in love with the valley decades before, and over the years, built it up to what it was today. It is an interesting read (here )(“About”), and if you’re at all curious, I recommend giving it a look. I had no idea of the history as I walked around, and every time I turned a corner I was surprised.

View of the grounds 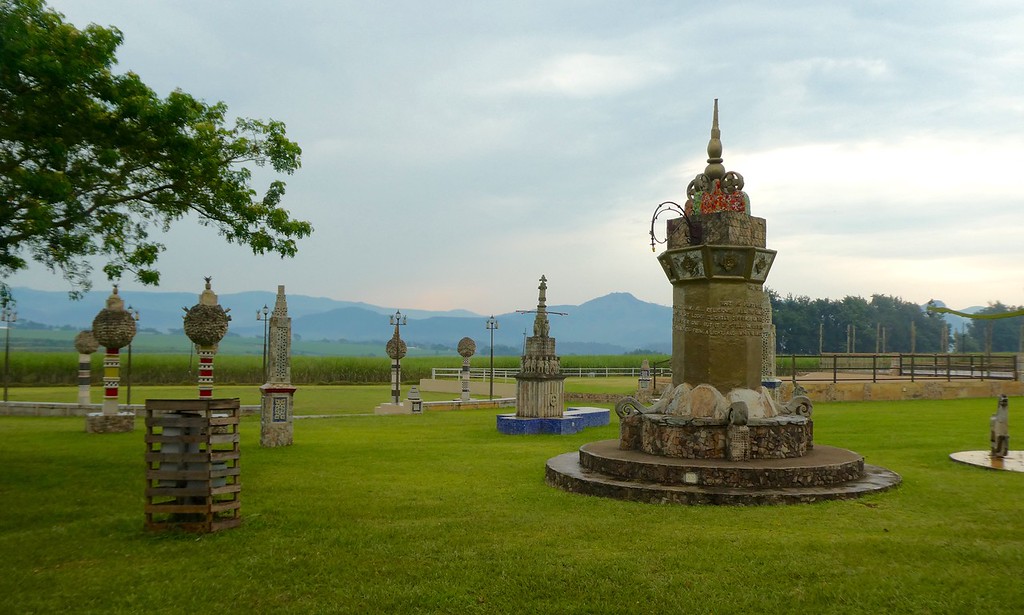 There were a number of small shops on the property, staffed and stocked by local workers with local handicrafts. The quality of the products available was excellent and I considered buying something before we left. But the purchasing window was small: without power, the shops were dark and no credit cards could be processed. And then the shops closed before the power was restored, so preventing others from doing any shopping. I took the opportunity to visit the art galleries and the performance stage, and then wandered back to the room to relax. 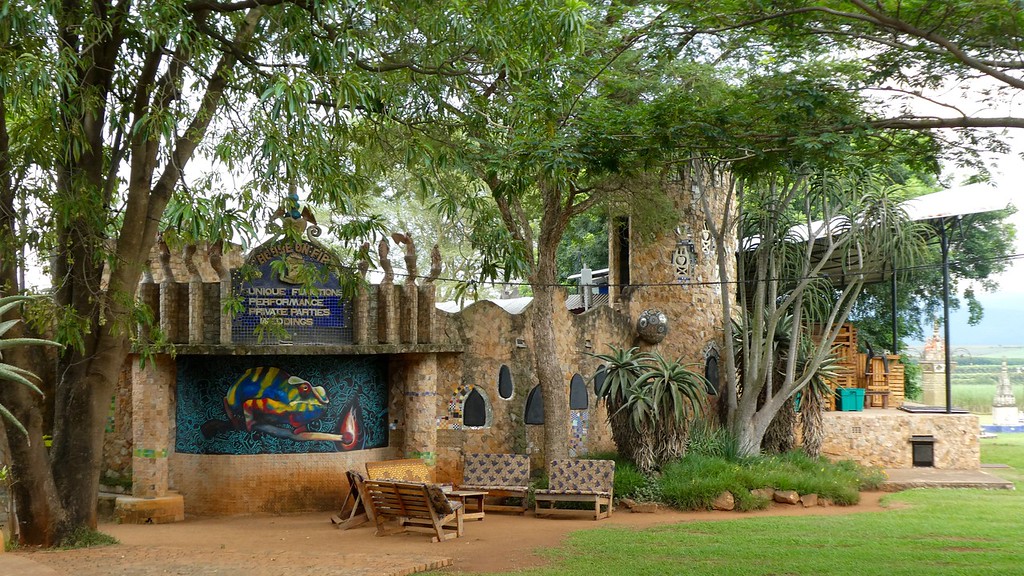 It was a wonderfully relaxing evening. We had another delightful meal on site (chicken and mushroom pie!), and while the rains never really came into full force, the thunder continued to roll across the valley. The staff put multiple homemade candles in our room in anticipation of the power not coming back any time soon. It was also convenient that our room had separate beds, so that Dan could make himself as comfortable as possible – and I got a good night’s sleep.