Sometime during night the power came back on. It was noticeable, as the lights in the room suddenly lit up, startling me out of sleep. It let me see the mosquitos that had come in through the window as well. I really do hate mosquitos.

Dan was stiff and sore and moved slowly, but we finally made it to the breakfast table where everyone else had already started. After a light but good meal, I got our bags together and took them out to the truck. Everyone was ready to hit the road just before 9 o’clock and I was happy that the temperatures were slightly cooler than yesterday. Then again, it was still early and clouds hung low over the landscape; things could change!

Today was the last day of riding on our tour and it was be another abbreviated day. With the lacklustre scenery and the humid weather from yesterday, I admit that I wasn’t upset about the tour ending shortly after lunch. We set out from Malkerns and passed through a modern, built up area. There was a lot of active building sites, which gave me hope that this area was experiencing some prosperity and that the future would be bright.

Leaving the city behind, we were soon riding through thick fog and the lush green of the countryside. The road crossed in and out of the low clouds, views periodically coming into sight, But frequently, I had to focus on Hana’s tail light, as that was all I could see.

Reminder that I am still in Swaziland! 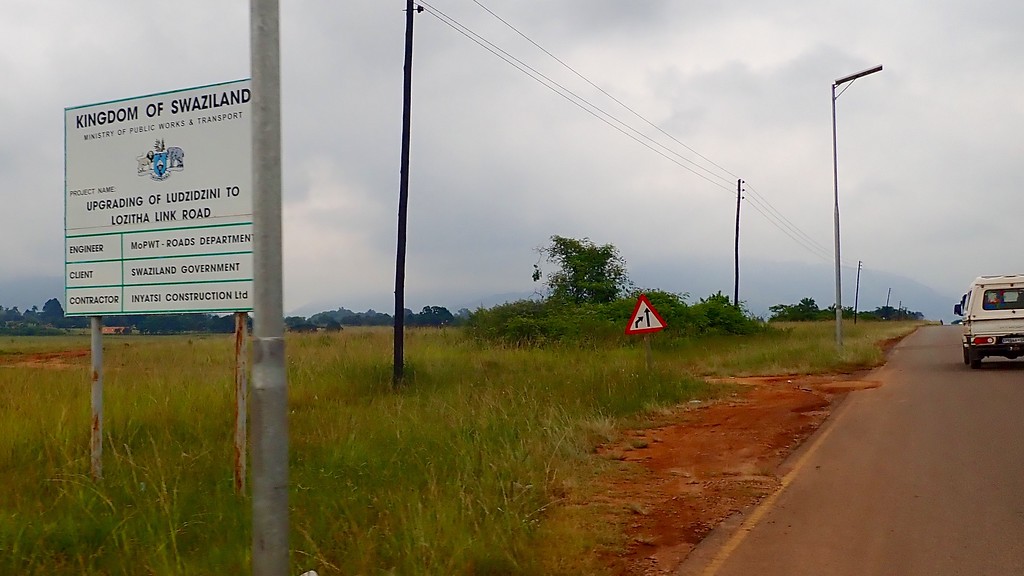 Advertising for such luxuries!

The views get less expansive 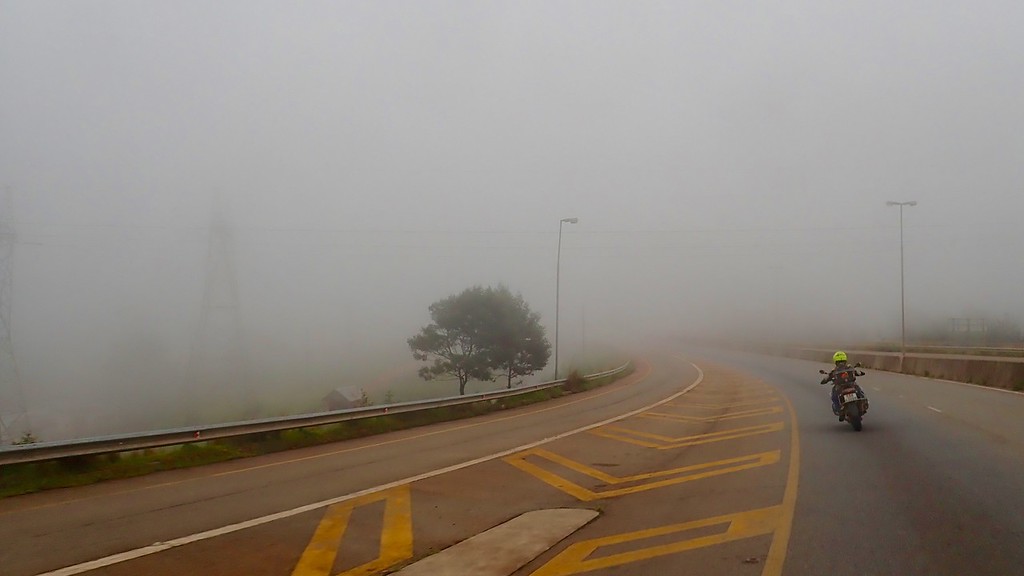 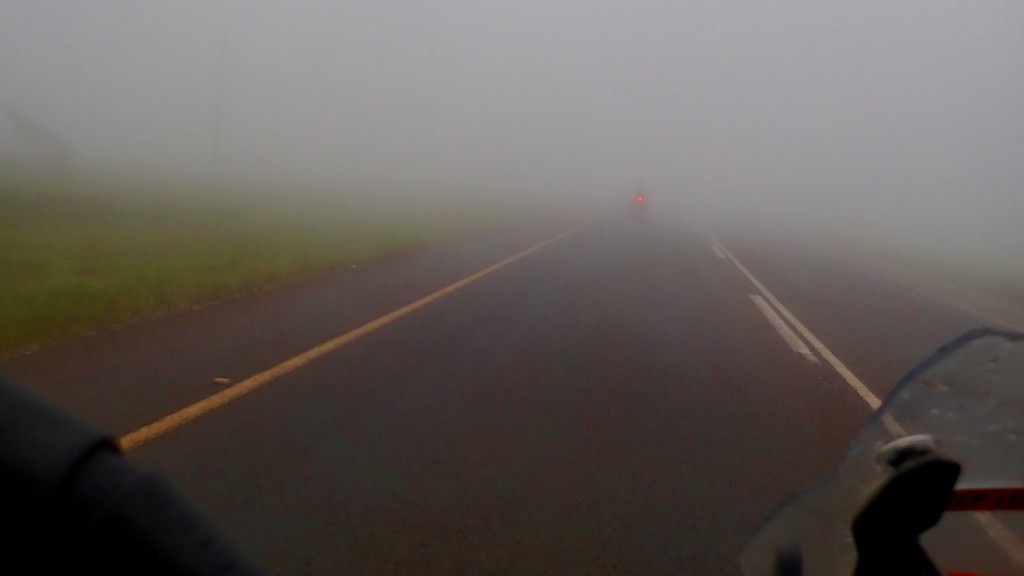 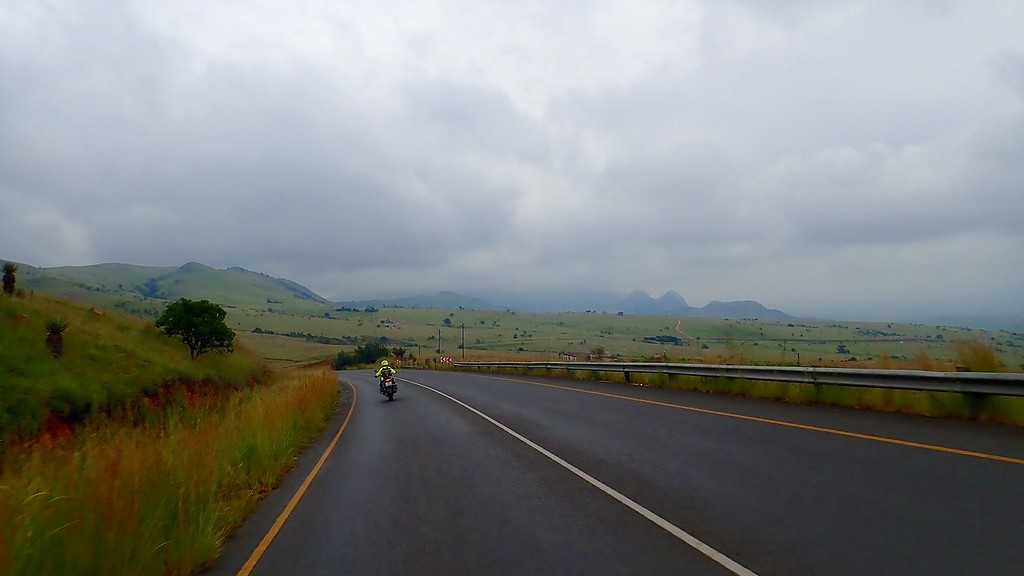 Hana was excited because this morning we would stop at a glass factory. This didn’t sound terribly exciting to me: what would I do with a piece of glass while on a motorcycle tour? But whatever – it was on the way and who knows what it might actually be like? Our group pulled off the motorway we had been on and turned into the parking lot of the Ngwenya Glass Factory.

It turned out to be really interesting.

Walking through the front door, I was immediately confronted with hundreds of tiny glass figures, wine glasses, decanters…an almost endless variety of items made from glass. And not just any glass, but recycled glass that was collected locally. “Swedish Aid”, the firm that started the factory in 1979, operated until 1985. Then the current owners took over in 1987 and have been active participants in the local economy ever since. Check out the “History” tab on the above link if you want to know more.

After browsing the goods available, I went on to explore the factory itself. There was a staircase tucked into one side that led up to a catwalk that was high over the furnaces, tables and packing stations. It was warm there, but I could imagine that the heat must be overbearing in the summer months. I watched a few of the stations and the work that was done there, wanting to know more and to be able to follow the process with more information.

Naturally, the most interesting part is behind the hanging hose 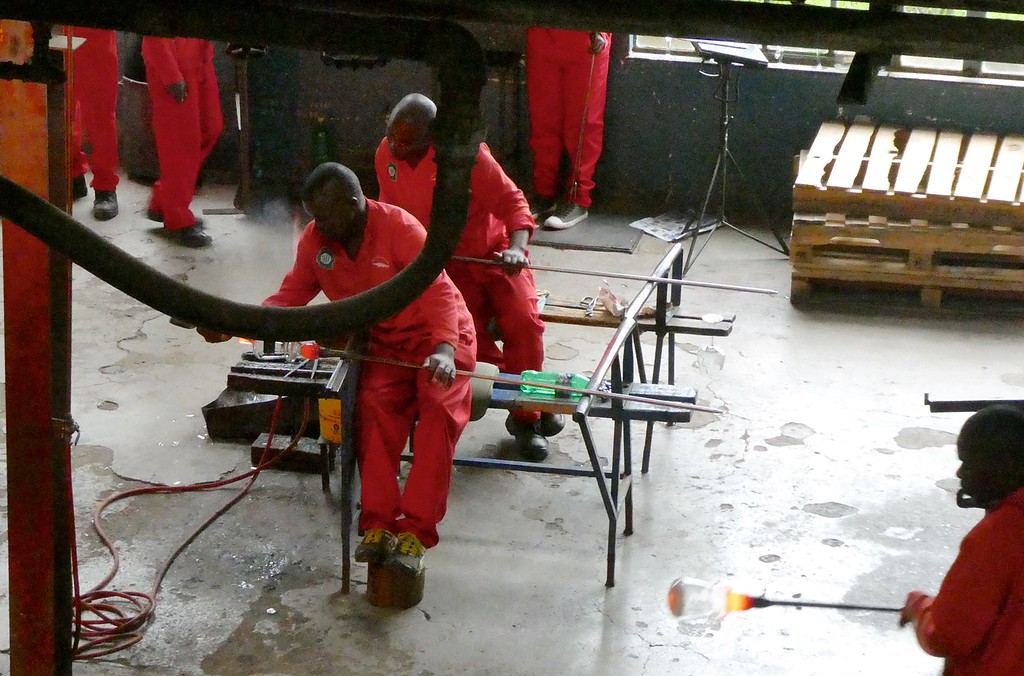 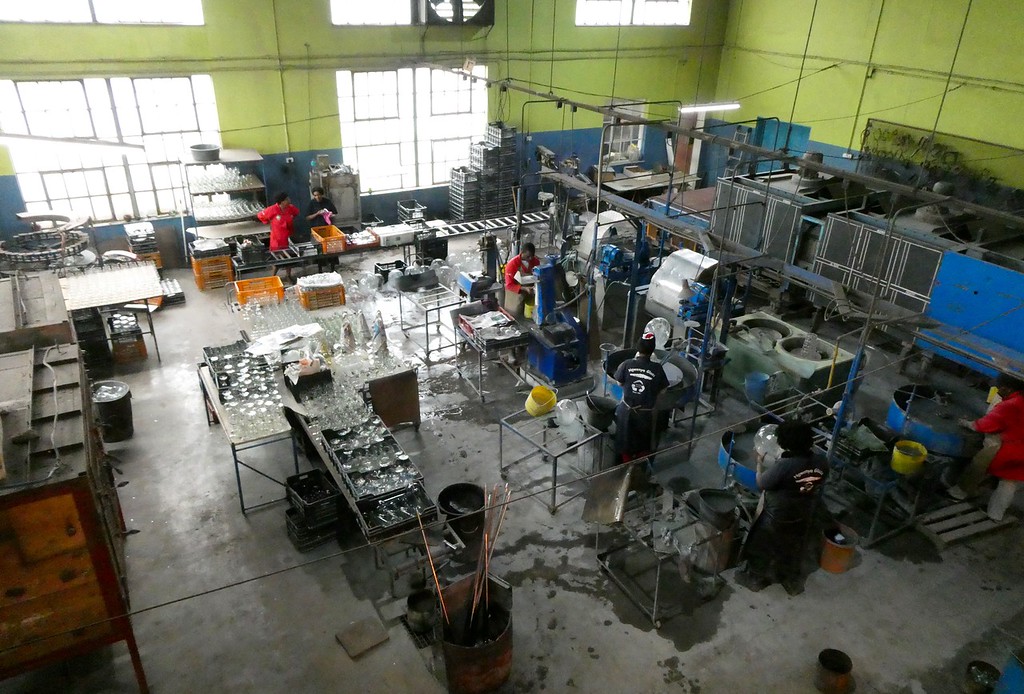 Our resolve not to buy anything had broken and Dan and I picked out a cute little penguin – and an even cuter and little-er elephant to take home with us. They were small and didn’t seem terribly fragile for the remainder of the trip. The woman at the cash register did a good job of wrapping them up as well.

The rain was threatening as we waited out in the parking lot for someone in the group to do his “last minute shopping”, and it was good to get back on the road and put some more miles behind us. At this point we were mere minutes from the South African border, and the crossing came up quickly. This wasn’t quite a complex as our entry into Swaziland, and it still entailed passport stamping, of course, but now there was an added feature: biometrics! Each of us had to have two fingers scanned, then the thumbs, and then the face. Fancy!

This was our last passport stamp until we actually flew home – how had our two week tour gone by so quickly? But wait! We weren’t done yet: we still had today and tomorrow to enjoy.

Trucks at the South African border 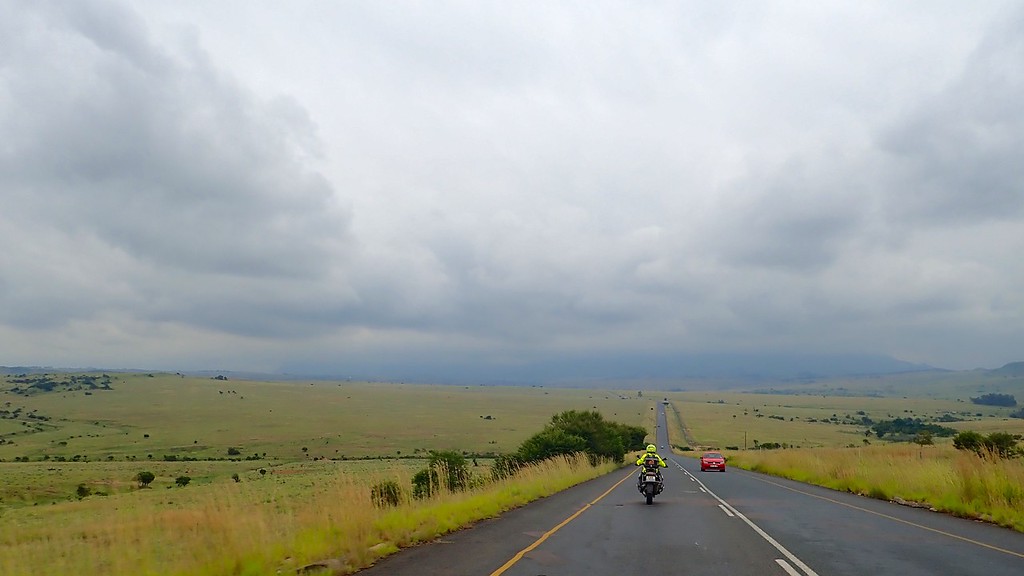 The countryside was much better than yesterday’s

The landscape became dominated by tree farms again, with the harvesting method being the unforgiving clear cut. It was a shame to see the monoculture forests, but worse to see the effects of the cutting. 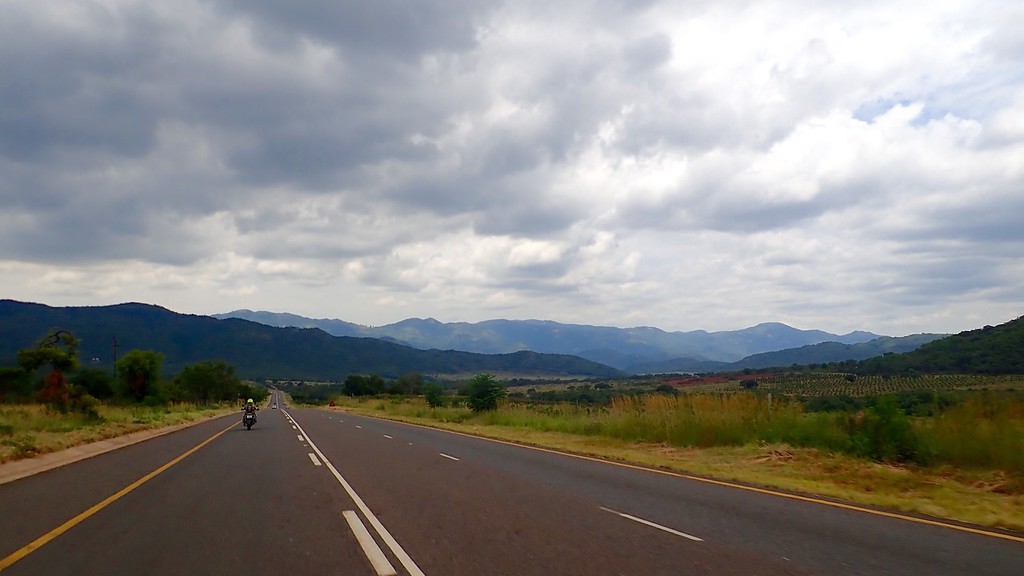 Another facet of the tree industry 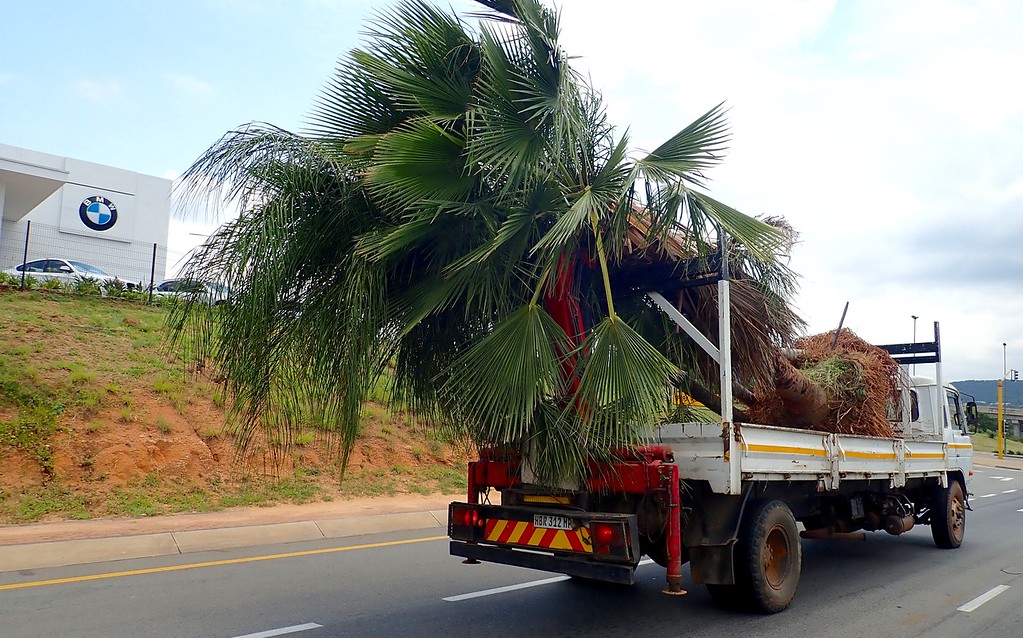 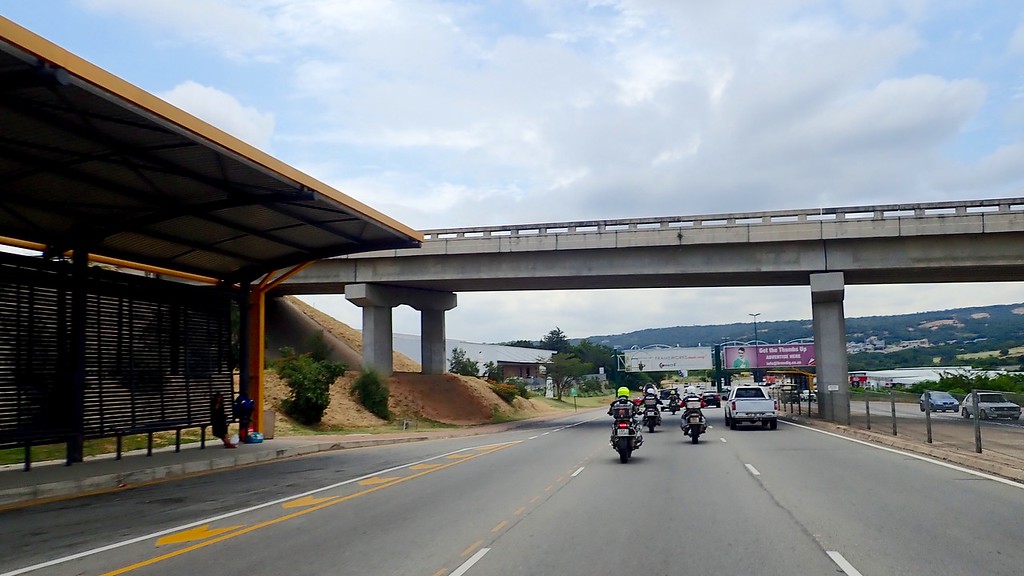 After we had passed through the city of Nelspruit and enjoyed more wide open country roads, our guides pulled off at what I would call “a wide spot in the road”. There were some shops built up along one side and it was a mystery to me what we would do here. The store fronts were packed up against each other and Hana made her way into one of them. It turned out to the be the “Route 40 Farm Stall” – which was also a restaurant. 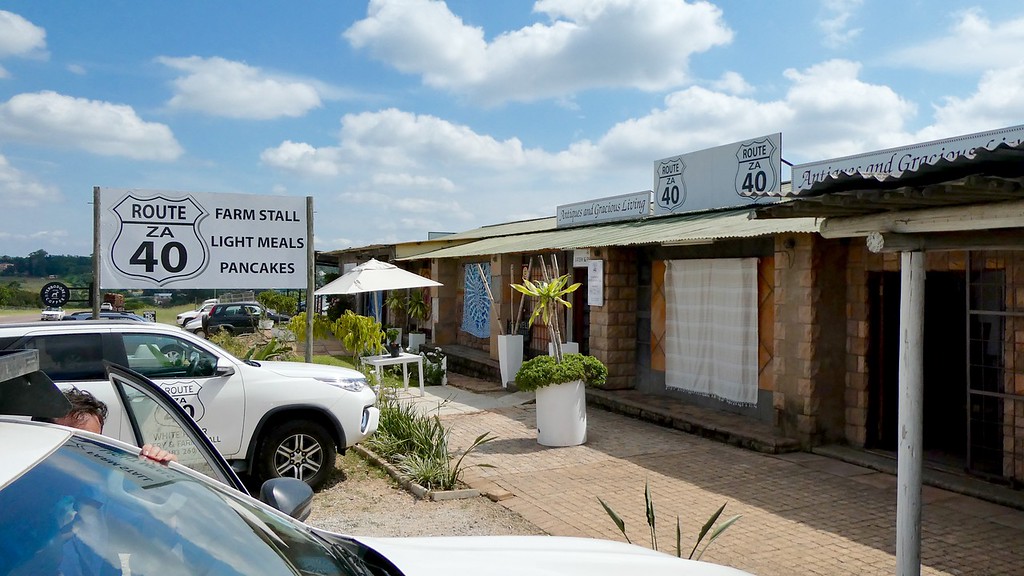 We were seated out back, the noise of a generator humming loudly nearby. Yes, “load shedding” was happening yet again during meal time. Our host apologized for the noise and gave us his opinion on the government’s inability to handle the current infrastructure. It was a difficult problem to solve, to be sure.

As our food came out from the kitchen, I realized why Hana and David had chosen this location: the food was amazing. Both presentation and taste were wonderful, and I was only too happy to enjoy what was put before me. of course I didn’t take a photo of it – just what the people around me had. 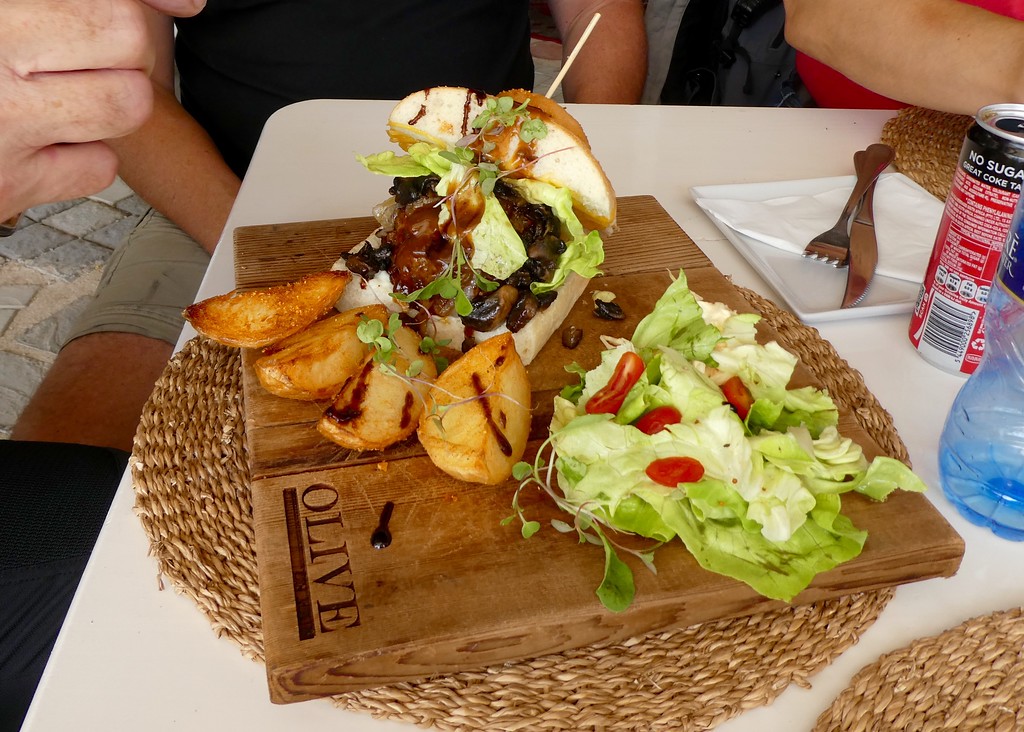 Dan’s milkshake – it was hot outside! 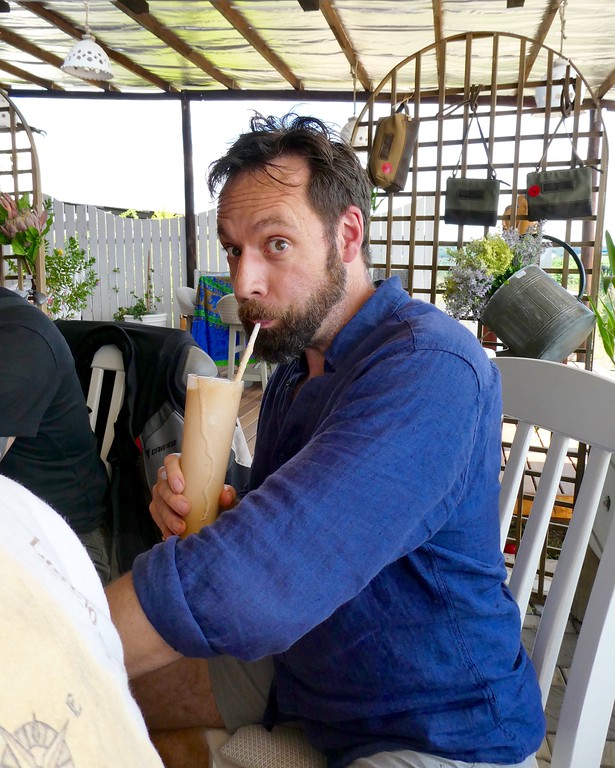 As we were finishing up our meal, a couple who had been dining nearby got up and come to our table. The man asked if we were with Hana and David and when they acknowledged, he greeted them warmly: they were the hosts of tonight’s lodging! The coincidence of them being here, of all places, and at the exact time we were, seemed incredible. They were very friendly and said that they looked forward to our arrival at their lodge so that they could greet us properly.

Waiting for a ride (across the street from the restaurant)

We weren’t too far from our destination and it was a fast ride over fast roads.

We were in banana country! (Banana for scale)

We pulled into the town of Hazyview to fuel up the bikes before the last few minutes to our destination. But some of the guys in our group wanted to return their bikes shiny and clean, even though this was not required by the rental company. Hana and David acquiesced and found a car wash nearby so that the bikes could get a rinse.

It turned out to be more than “a rinse” – we had found a full service wash facility with a full service team. And water pressure to run their hoses, too! Our guides worked out a deal with the manager, who hovered closely throughout the entire process. And what a process it, was too: we pulled as many bikes into the bay as possible and the team immediately got to work. It was quite a good deal for 50R (2.50 CHF) per bike. 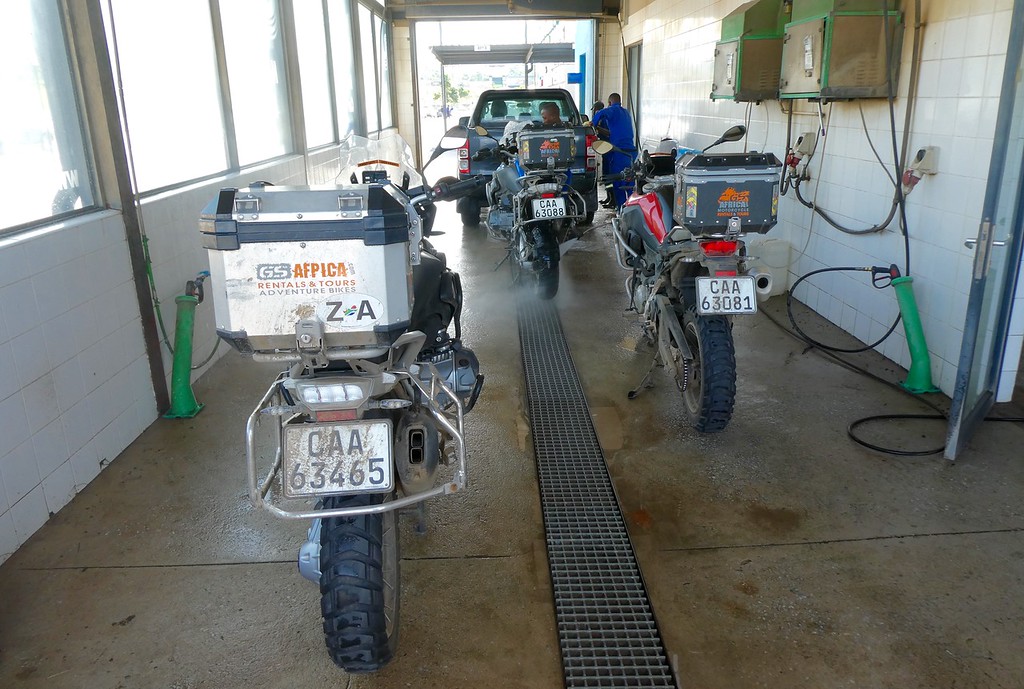 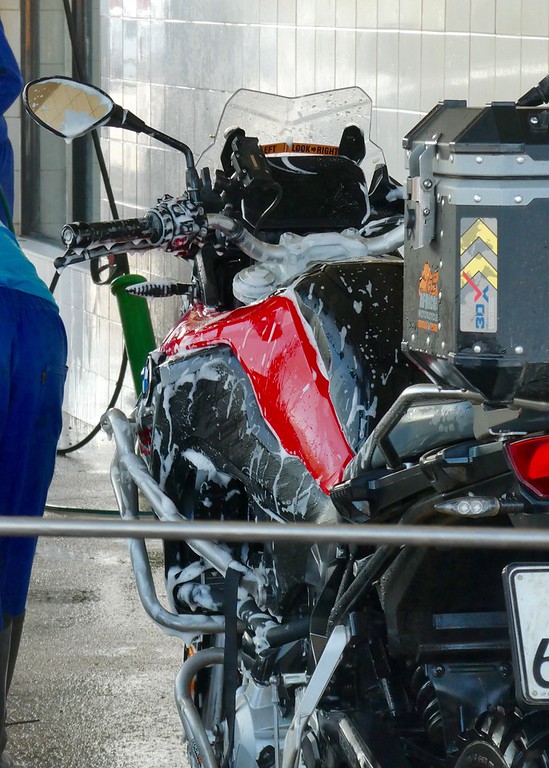 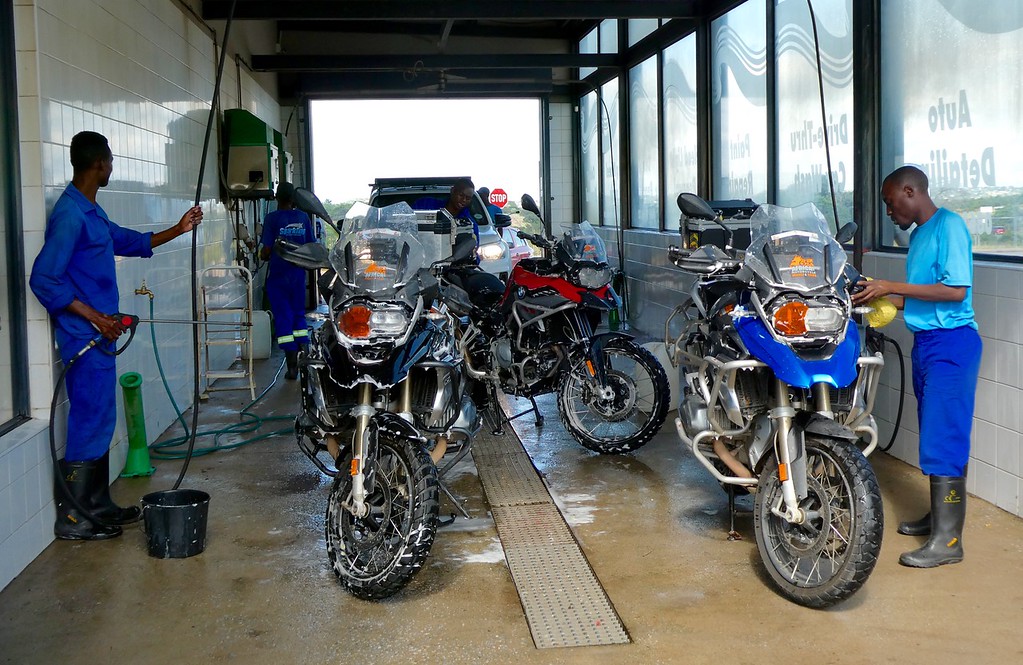 Post-wash drying station (with the manager in the middle, keeping a close eye on things) 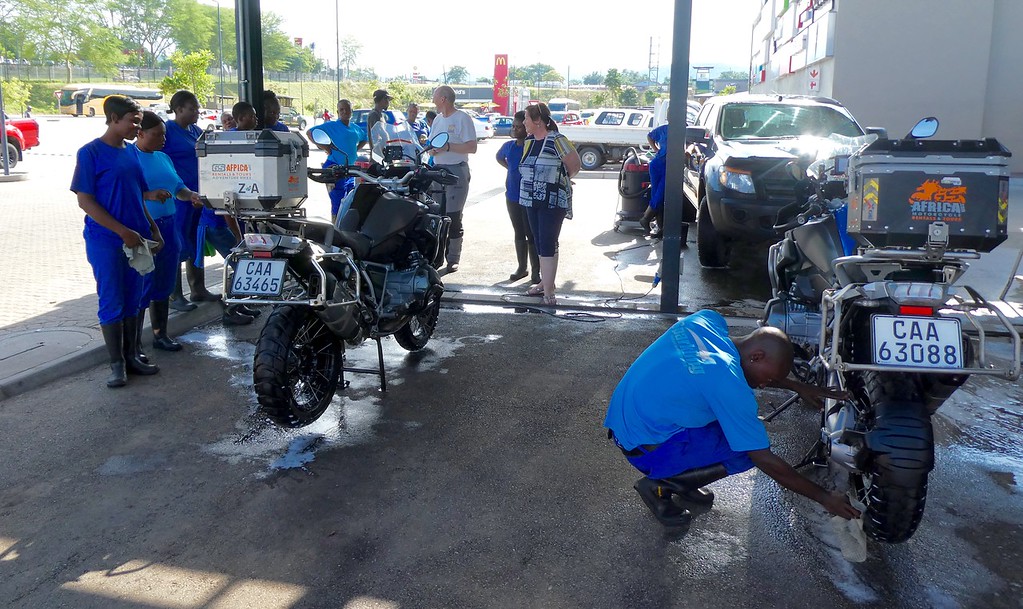 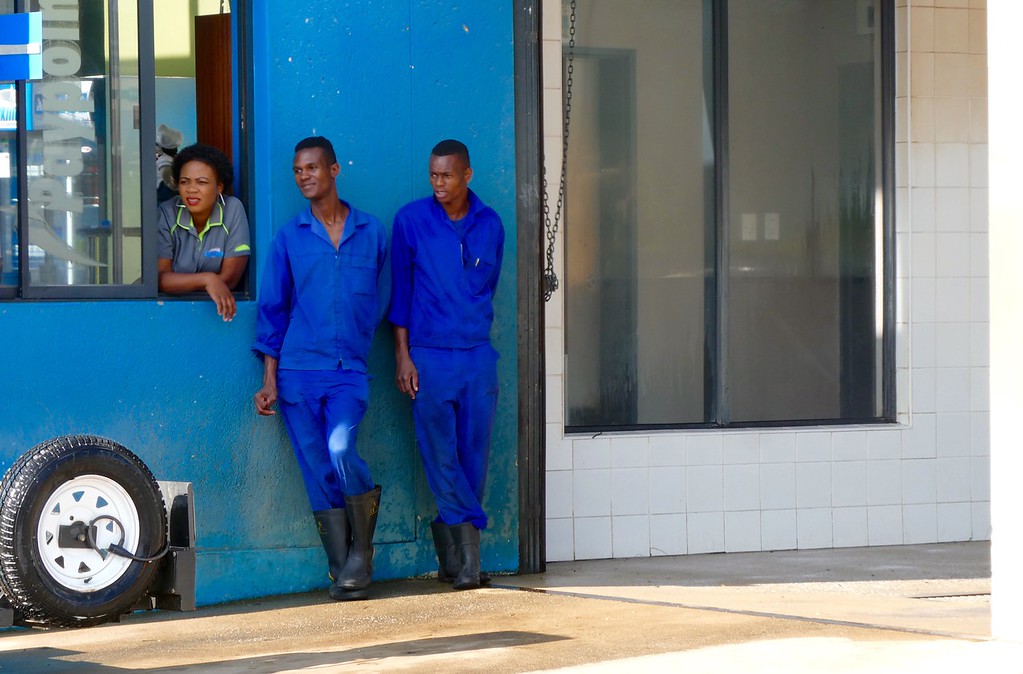 With everyone’s vehicle clean and shiny (even David’s truck got a wash!) we rode the last few minutes to Ashbourne, where we would park the bikes for the last time. I had to chuckle when the road changed from paved to dirt – good thing we washed the bikes!

The Ashbourne Country Escape was a delightful array of buildings, landscapes and views. In the time that we spent at the lodge I learned a lot about our hosts and the history of the grounds. It was a compelling story, and I was really surprised that the buildings on the site were new (well, they started to build in 2006) as they looked well-set into the environment and could have been built 100 years ago. Here is an excerpt from their website that pretty much sums up the history of the place:

“Having always had a love affair with the Lowveld, when they decided to downscale from citrus farming, it took just one look at the site to inspire them to build a new home from scratch.
‘We wanted to take all that’s good about South African farmhouses, but tweak the design to get rid of passages, poor lighting and lack of bathrooms,’ Rob comments.
‘I wanted our house to disappear amongst the trees and rocks and definitely didn’t want anything ostentatious,’ says Dawne, adding that they were determined to use the land’s natural resources.”

The main building and reception 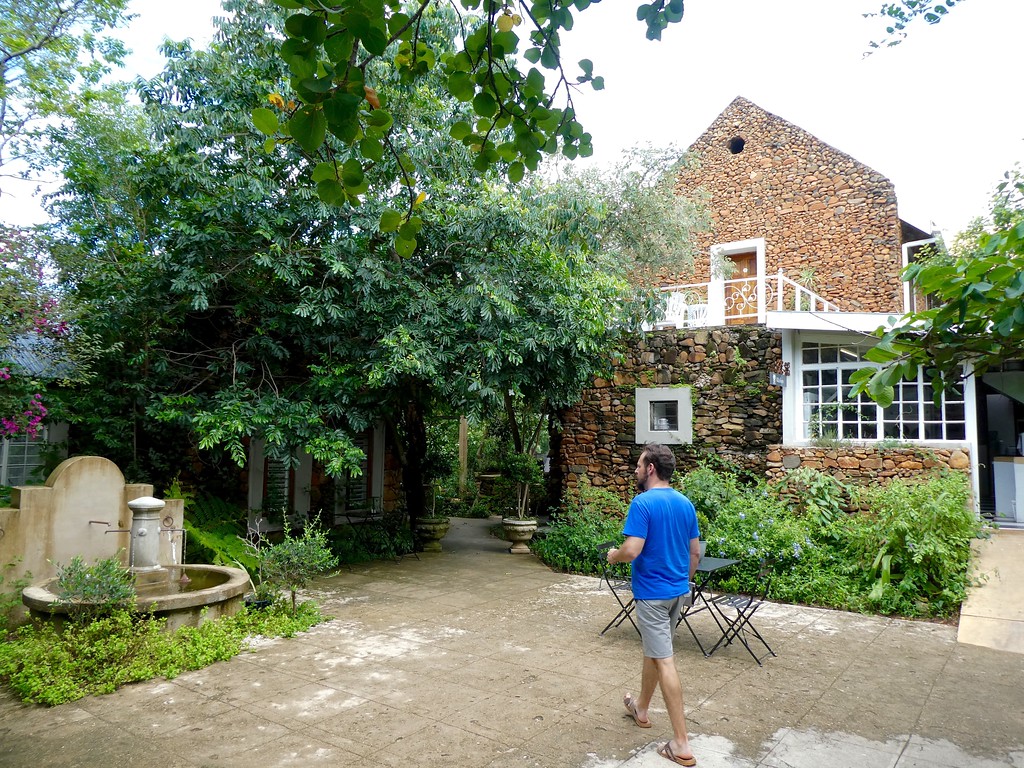 The grounds were on the top of a ridge, giving expansive views no matter which way you looked. It was a wonderfully peaceful and comfortable space. I would love to have something like this for myself.

Our hosts had designed everything themselves and it was an on-going project, with constant additions and updates as they went. But in talking with Rob, he admitted that they were realizing that they liked what they had built and now they wanted to focus on finishing projects instead of starting new ones. They were supposed to be retired, after all, and would appreciate being able to focus on their guests.

Our own personal sunroom 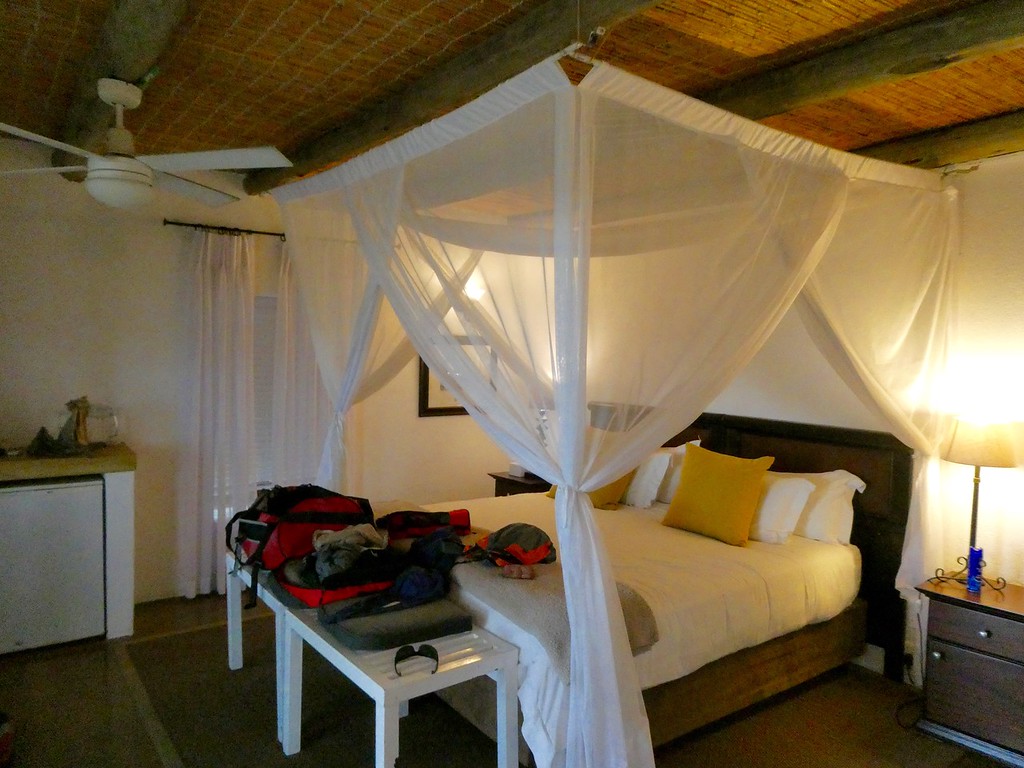 We had the afternoon to ourselves. It was important to make sure that all our personal items were removed from the motorcycles, as the guy had come to load them up on a trailer and haul them back to Cape Town. What had taken us two weeks to cover he had hoped to complete in two days. But I bet he wouldn’t stop to smell the flowers like we had!

I spent time exploring the grounds and chatting with our group. They were a great bunch of people and I was glad that our personalities had meshed so well. Rob and Dawne were around and I picked their brains about their experiences here. Then I joined Dan who was resting in our sunroom and we relaxed together until dinner.

They had some very big and loveable dogs on the property

A wonderfully heavy rain rolled through that evening and it was so nice to watch (and hear) it come down from within the comfort of our sunroom. I would love to have a room like this – and a view to go with it, of course.

Rain on the pool

There was a wonderful sunset before we headed over to the restaurant building for a pleasant meal at the outdoor table. The food was just as good as the views, and the staff that served it were extraordinarily pleasant. I wouldn’t mind spending a lot more time at this place! 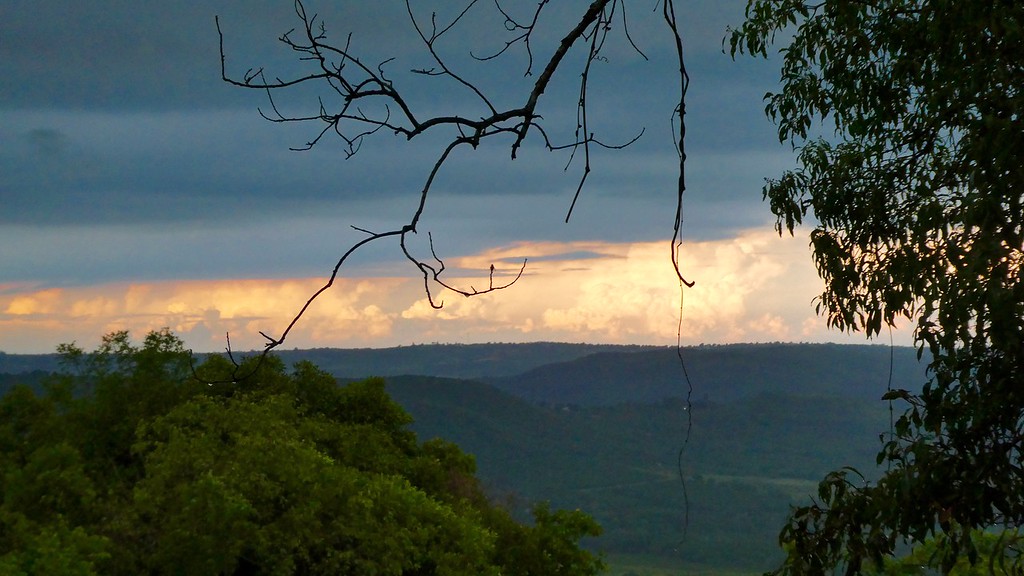