One should not visit Cape Town and not take the time to visit the Cape of Good Hope. I mean, at least we weren’t going to miss it! We signed up for the City Sightseeing tour bus, planning on a full day for the activity. There was a tour stop just around the corner from our hotel, so we had time to enjoy another tasty breakfast at Rosa’s Bakery.

We joined the other tourists already on the bus, unable to find seats next to each other. Oh well – we would be too busy looking out the window to miss each other, right? Except that my seat-mate was sitting next to the window. This alone wasn’t really an issue: not everyone can have a window seat on a bus. But she spent most of the day looking at her phone, or closing her eyes, looking around only when the bus slowed down or stopped. What a waste of a window seat… 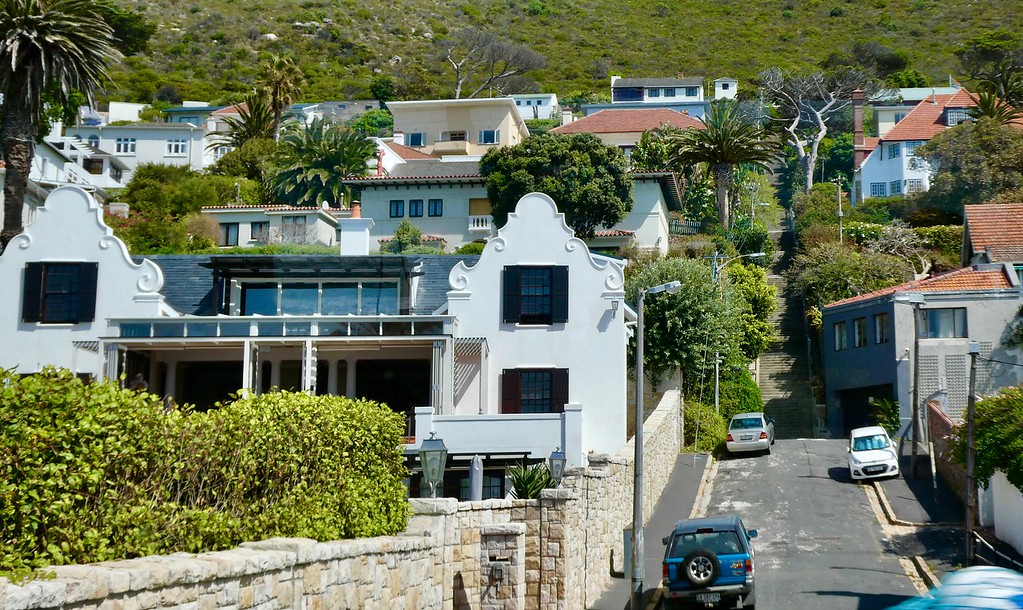 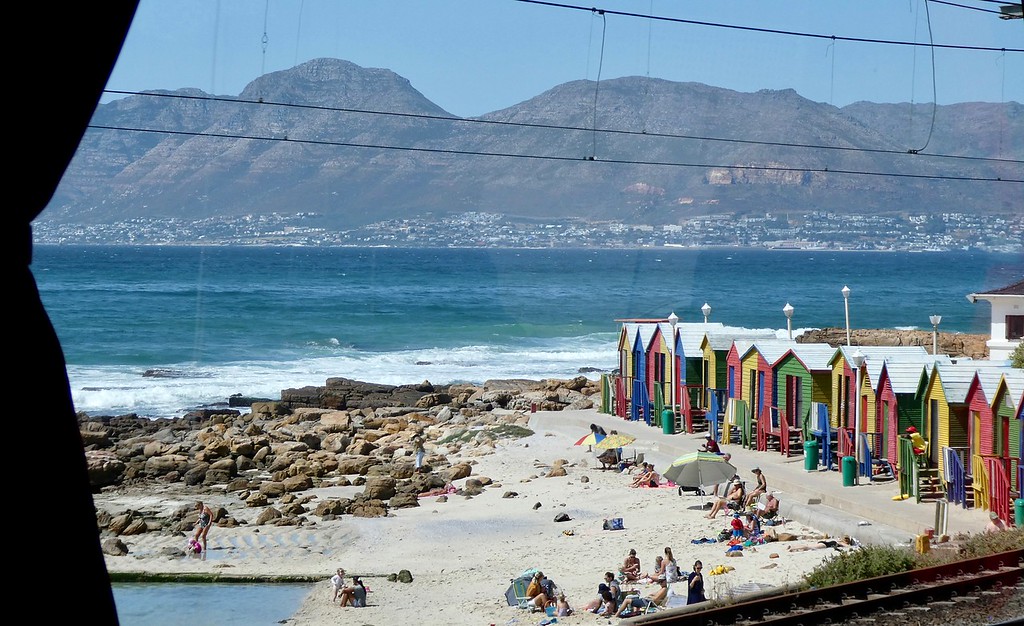 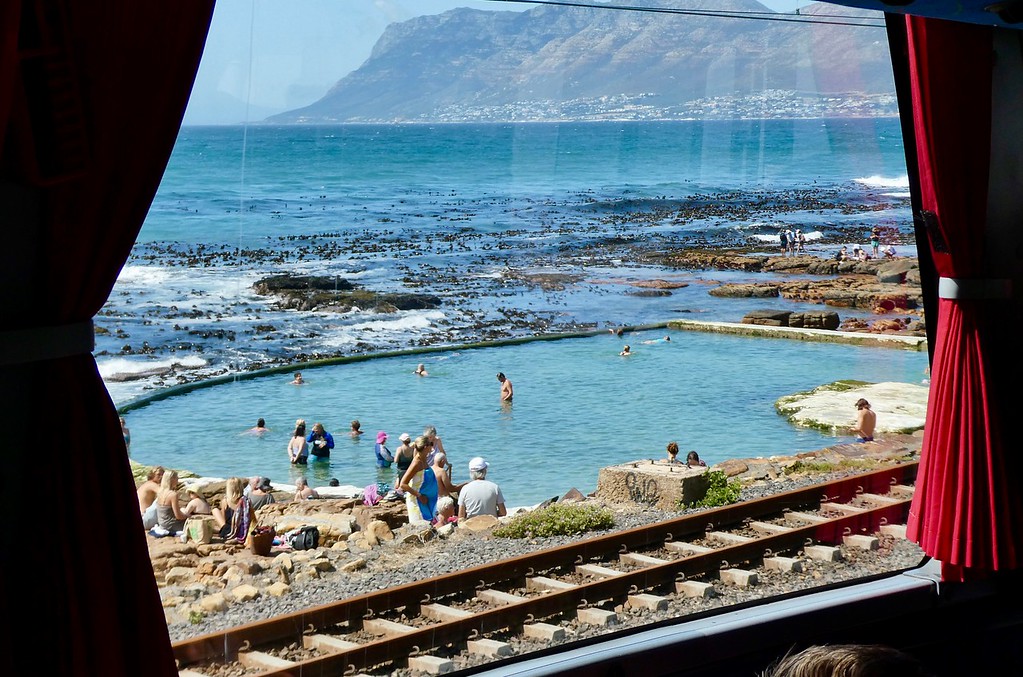 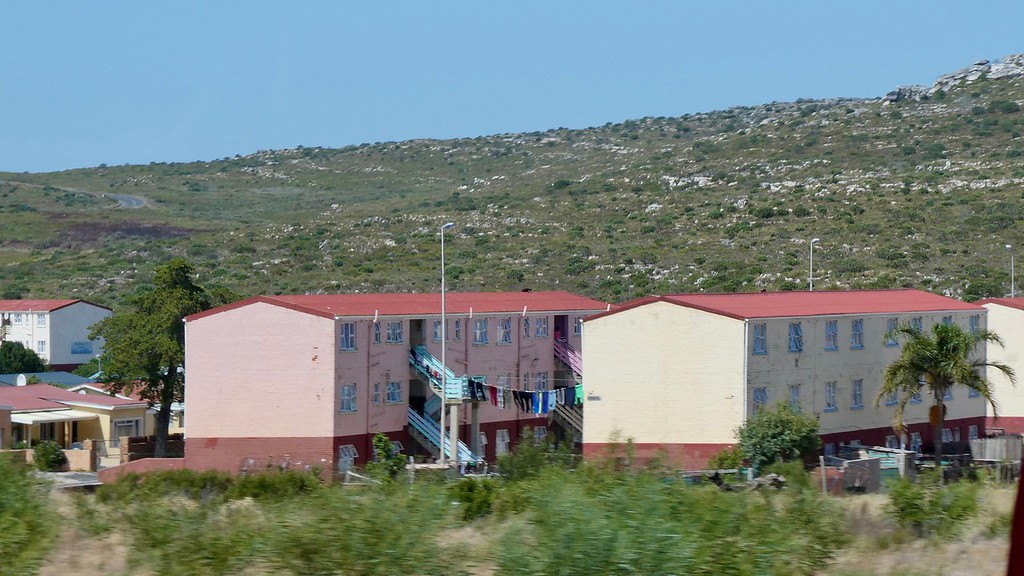 View of the Atlantic 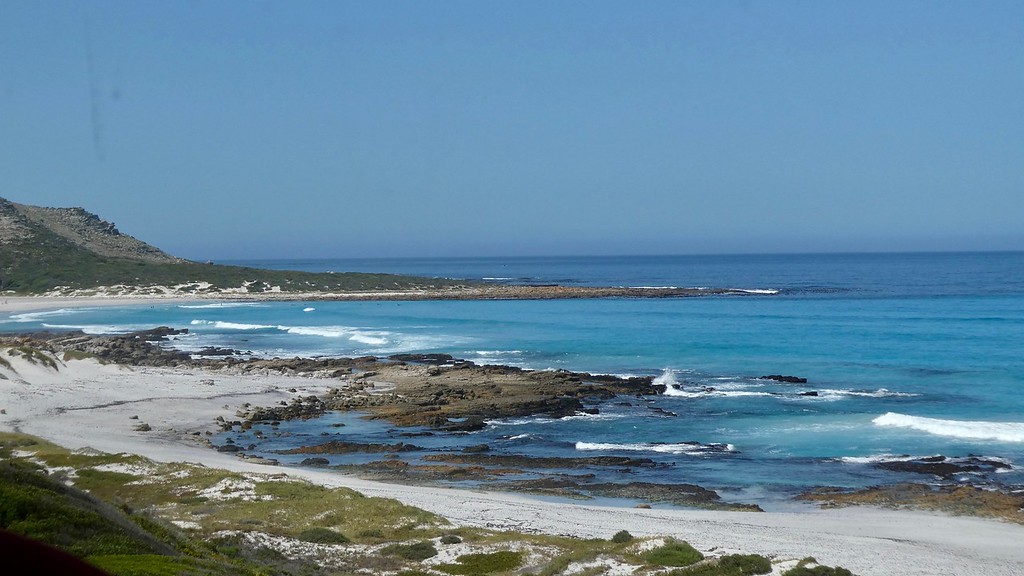 After forty minutes of watching the scenery pass by my eyes and a steady stream of information worm into my ears, we stopped at the entrance to Table Mountain National Park. At over 85 square miles, the park was created primarily to protect the native vegetation that covers the Table Mountain Chain, primarily the species knowns as “fynbos“. This massive tract of land also plays hosts to more than just plants, but also animals. “Historically, larger predators roamed the area including the Cape lion, leopard (which persisted as late as the 1920s, and tracks are claimed to still be found today), as well as spotted hyena and black-backed jackal. Large herbivores similarly disappeared at the hands of the European settlers, for example elephant, black rhinoceros, kudu, eland, mountain zebra and bontebok, although the last three species were re-introduced to the Cape Point section of the park. Smaller mammals are still found in the park: caracal, rock hyrax and a variety of small antelope species, such as the Cape grysbok and notably the recently re-introduced klipspringer.”(Wiki) 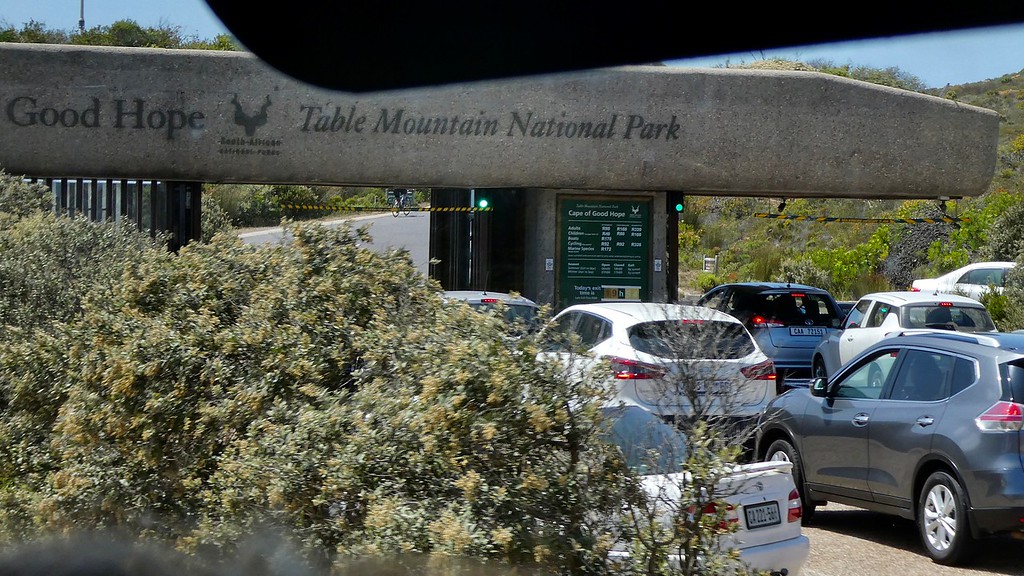 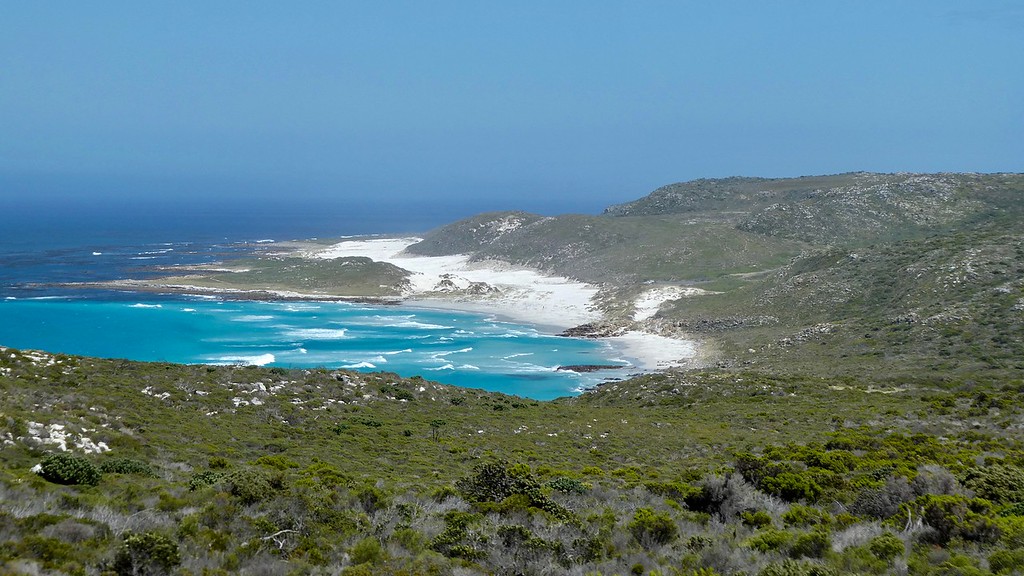 The view of the Cape of Good Hope

Our tour bus parked and our guide gave us instructions: we had an hour for lunch, and then we could go on an (optional) hike out to the Cape. Dan and I had planned ahead for this: knowing that there was just one restaurant this far out, and figuring that it would be sub-par, packed and expensive, we had brought along our own sandwiches and drinks. Clever!

But first wanted to check out the region and and visit the lighthouse at the top of the hill. Time to get walking!

Looking back down the path 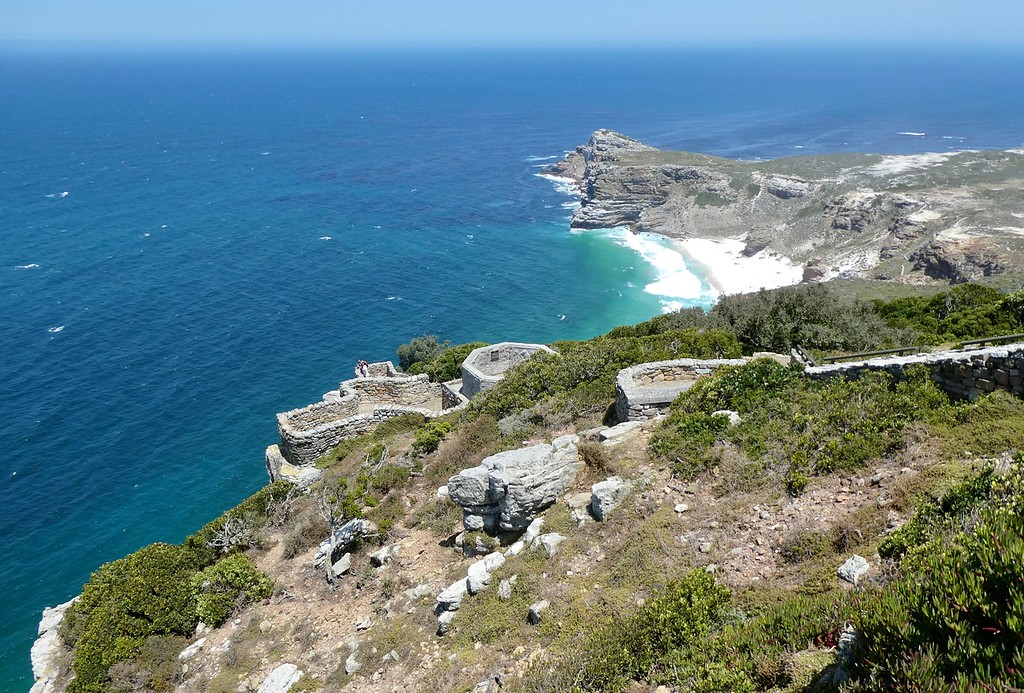 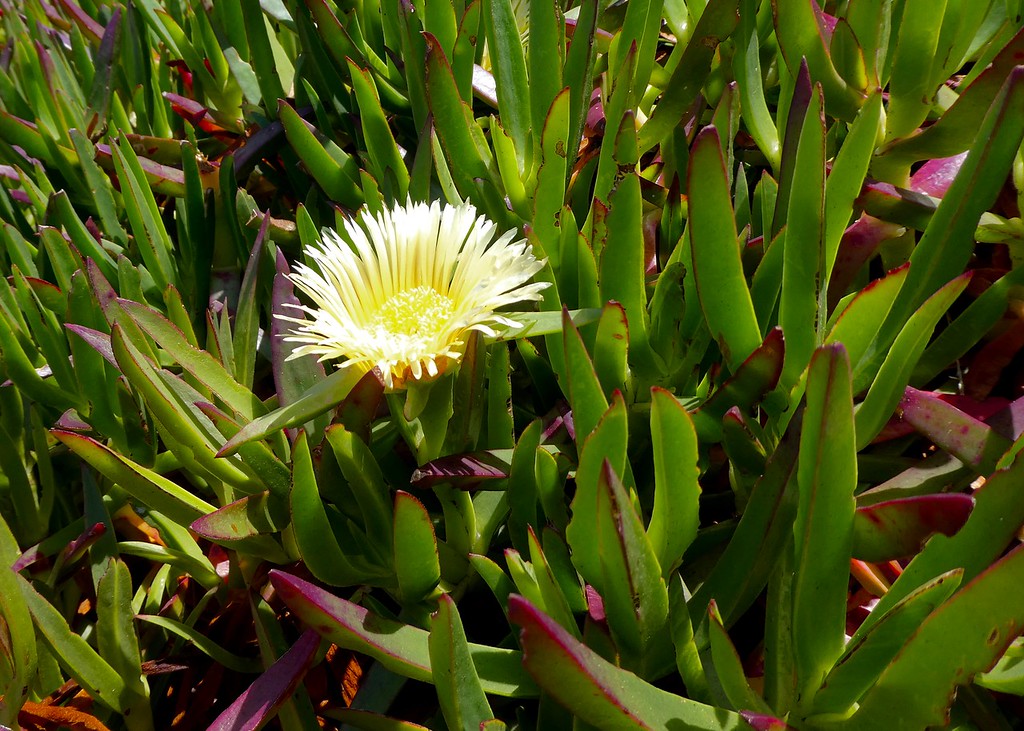 The Cape and pathways around the base of the lighthouse 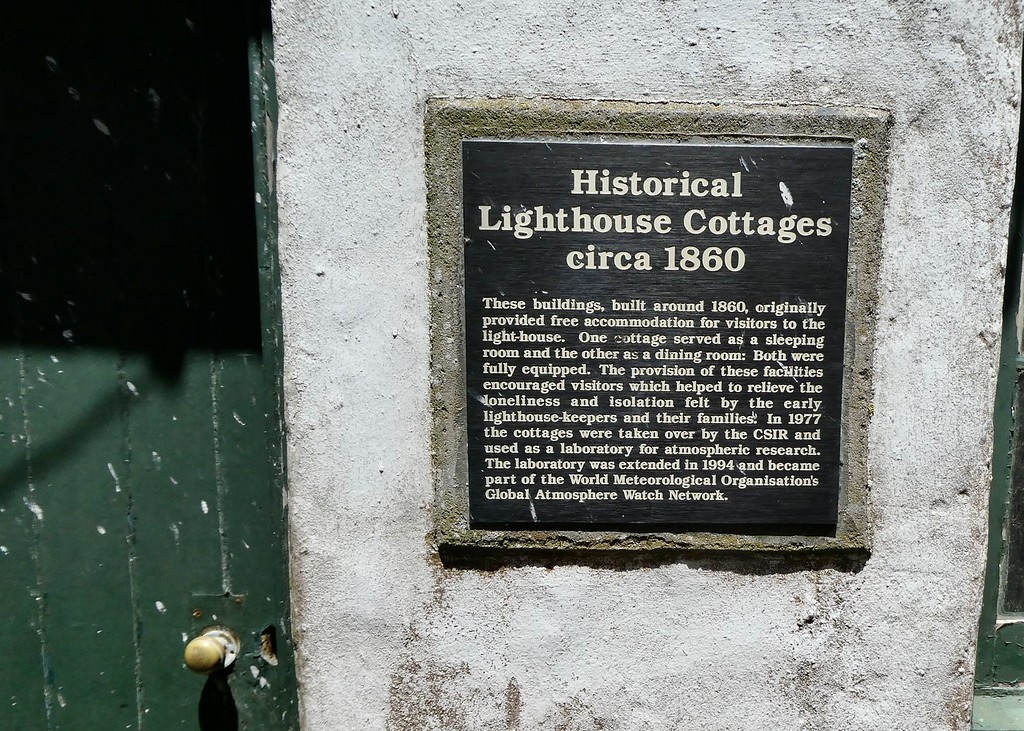 I just realized that I never even took a photo of the lighthouse itself! Well, picture a tall, skinny, white tower with a light on top. There you go! It was really, really windy there, too. I can’t even imagine what it would have been like four days ago, with the even stronger winds that had blown through here.

We found an empty table and pulled out our sandwiches. While we ate, a couple of birds came around and started to harass the guy at the table next to us. I had a hard time not laughing out loud when one of the birds was bold enough to attempt to steal his sandwich right out of his hands!

Actually, I was surprised that we didn’t see any baboons while we ate. We had been warned by several signs that they might approach in search of food, and anyone caught feeding them would be heavily fined. But then later, as Dan was walking with a small snack, a baboon came ambling in our direction. Dan wisely did the first thing that came to mind: he hid behind me! His defense was that he was just trying to keep the food out of sight, but I think that we all know that he was just assuming that no baboon would dare to attack me.

Post lunch was the hike (walk) to the Cape. I think that everyone on our bus decided to join, and our guide led us on our merry way. The bus itself would wait in the parking lot before driving down to the lower lot to pick us up. It was a pleasant 40 minute walk along paths and boardwalks, all the while surrounded the amazing scenery of South Africa. 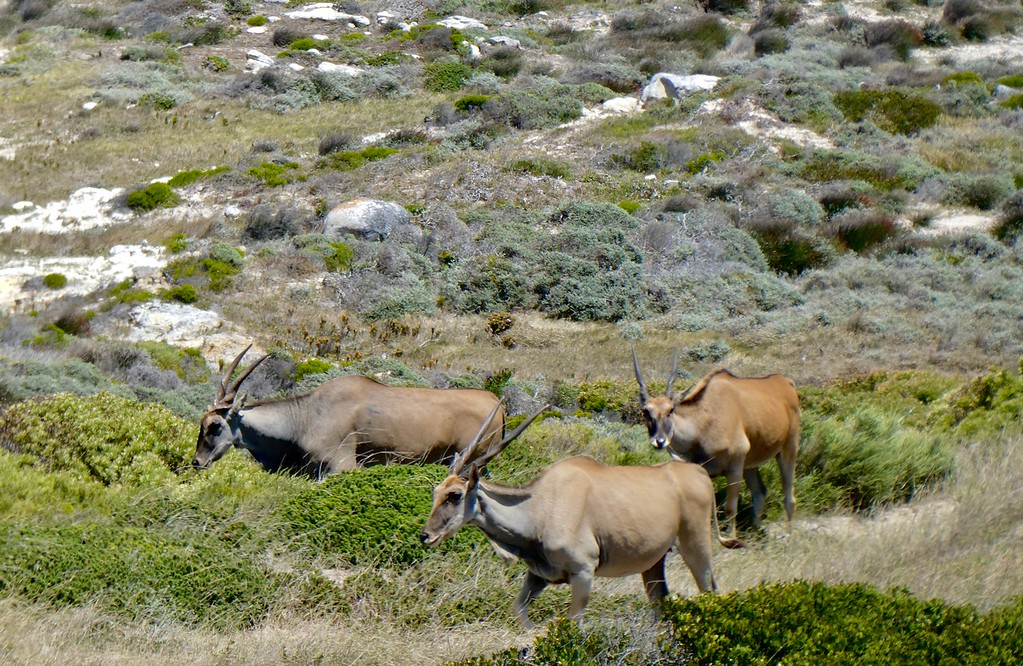 Heading down the path 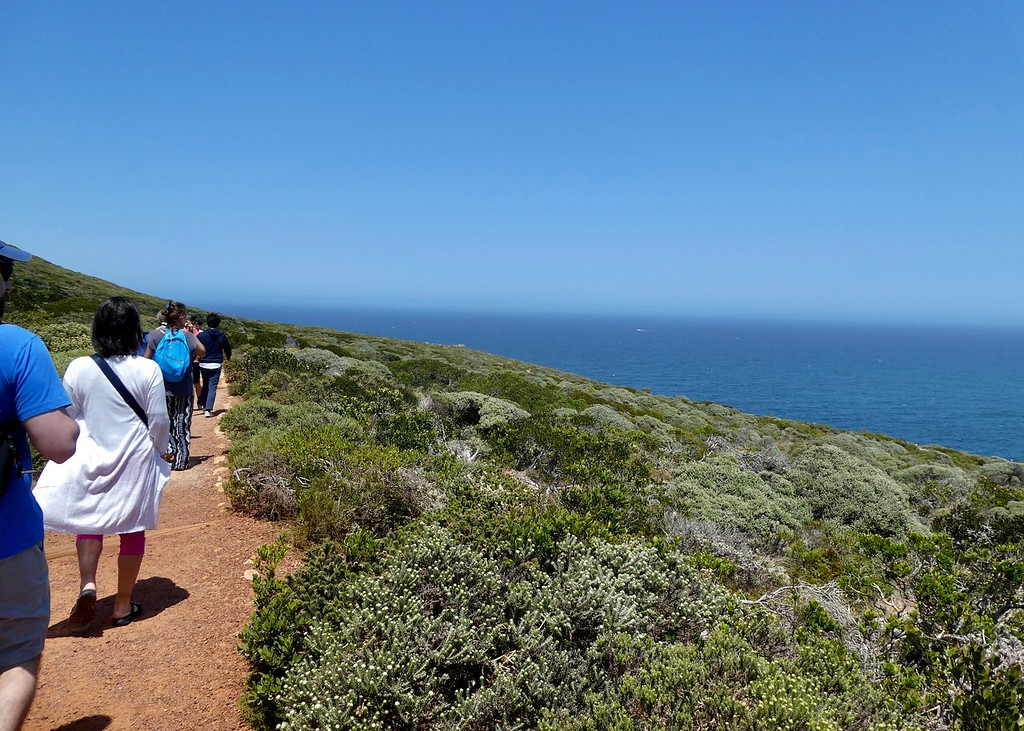 Great vegetation in the area! 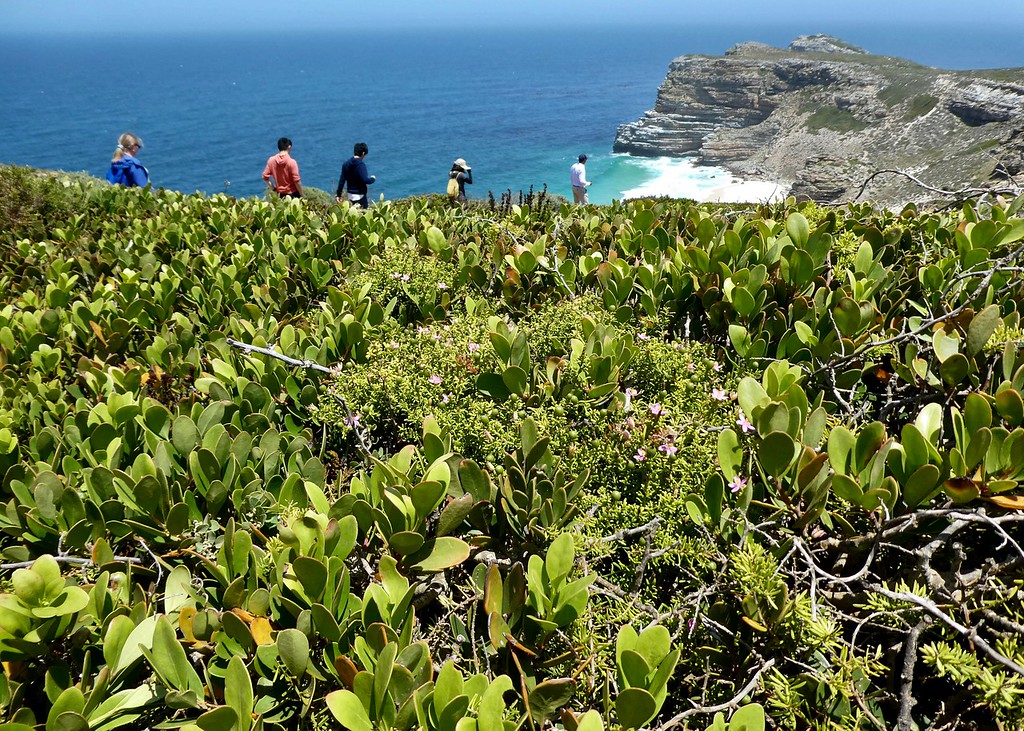 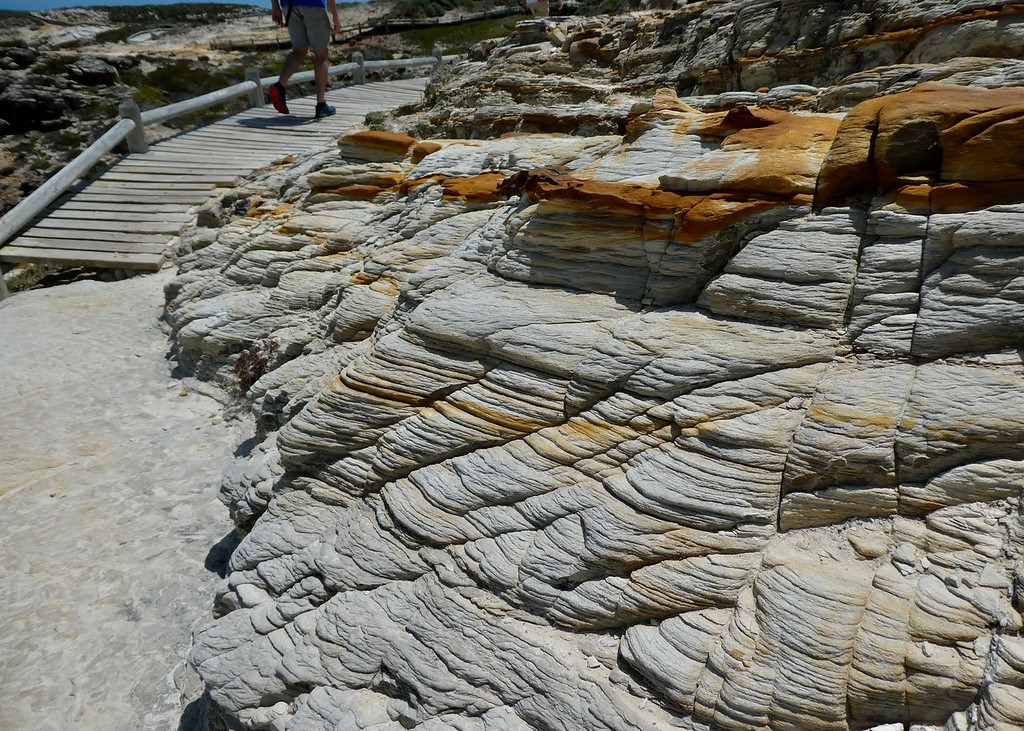 Following the the cliff to Cape Point 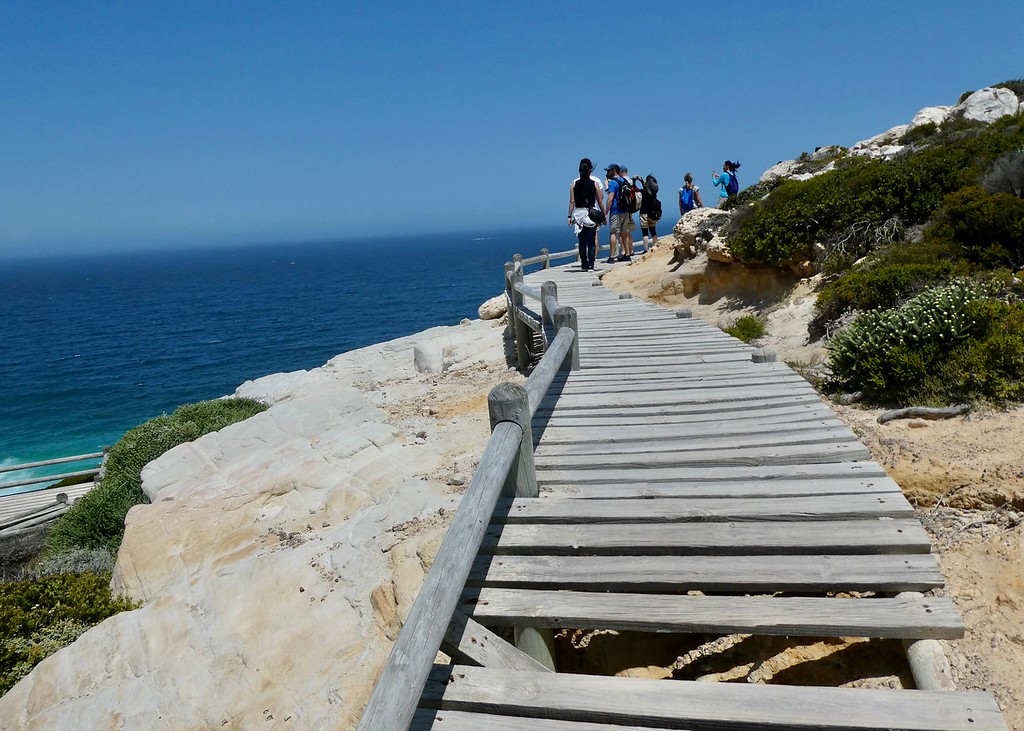 Our red bus waiting down in the parking lot 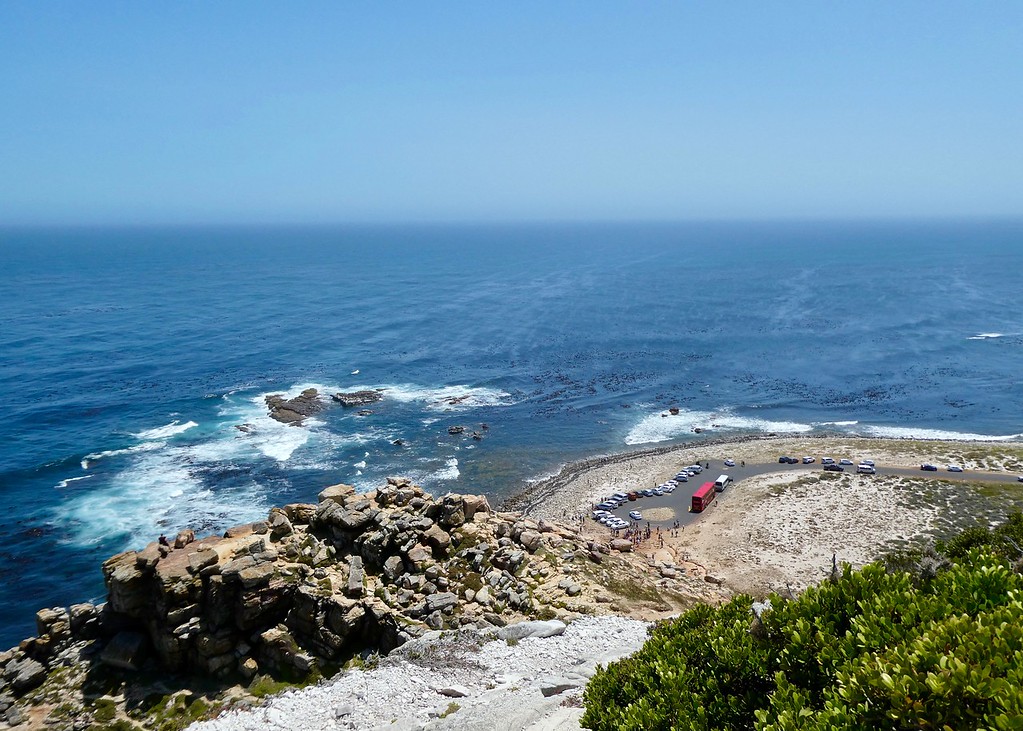 Our group boarded the bus and, per our guide’s request, returned to our same seats as before. Sigh. We pulled out of the parking lot and made the trek back towards Cape Town. We would take a different route back, meaning that we would see all new things along the way. And just a couple of minutes later we saw our first “new thing”: wild ostrich! There were four of them feeding in the space between the road and the ocean. The bus driver was good about stopping to let us take pictures as best we could.

And shortly after that was momma and baby

We drove up the coast, stopping near Simon’s Town to visit Boulders Beach, home of the African penguin colony. Penguins! 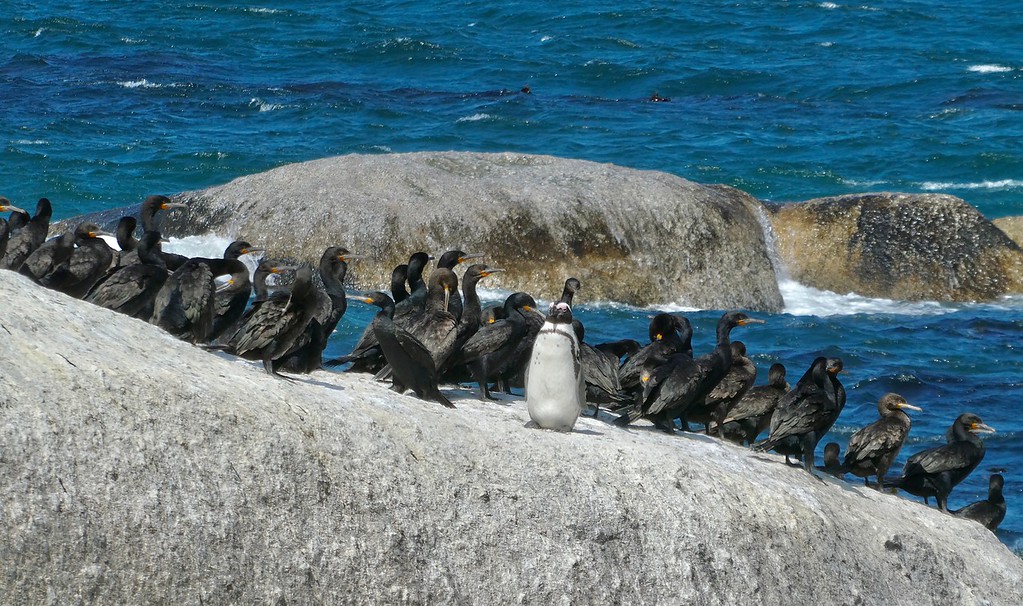 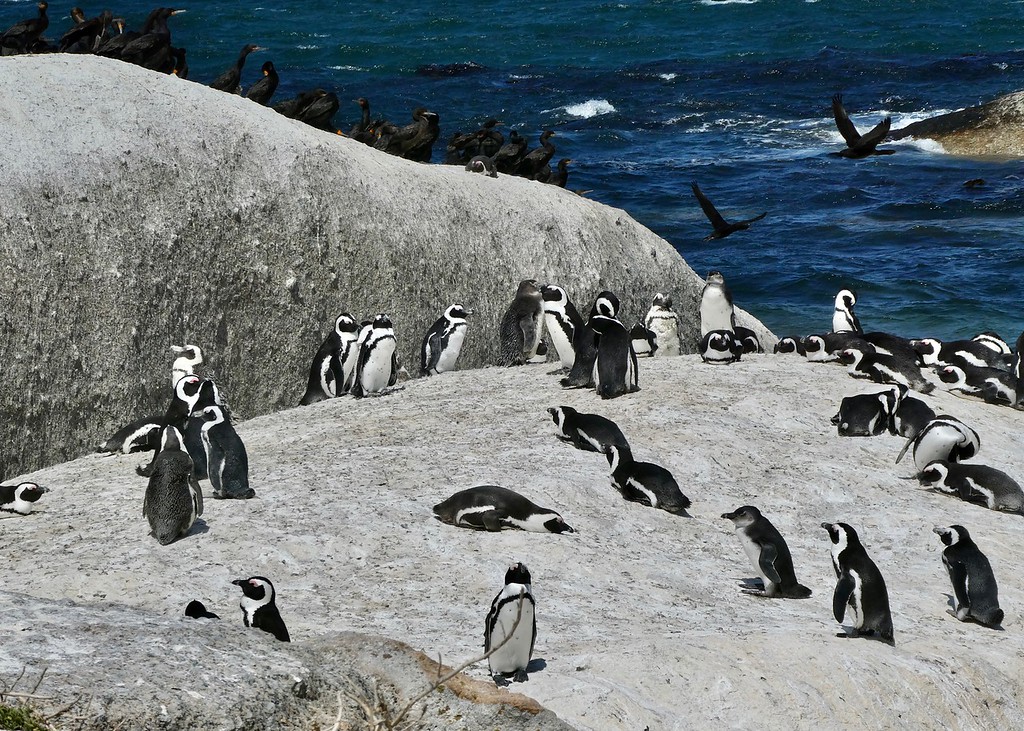 Boulders Beach is set up so as to keep people away from the penguins while still allowing for great viewing. We were kept on boardwalks that were raised above the penguins, allowing them to roam freely without us trampling on their nests and causing them stress. The tuxedoed birds looked indifferent to our presence.

The African penguin is sometimes known as the jack-ass penguin, and once I heard them calling, I knew why. It was exactly like listening to the bray of a donkey! Imagine walking through dense shoreline vegetation and hearing the sound of donkeys coming from under the bushes.

They were cute little buggers

Burrows dug into the sand for nest building

Post-penguins, we boarded the bus for the final leg of our journey. It had been a busy and full day and quite honestly, I was looking forward to a relaxing evening.

The remnants of one of many shipwrecks off the coast

South Africa doesn’t have much in the way of public transit, but there are a few trains 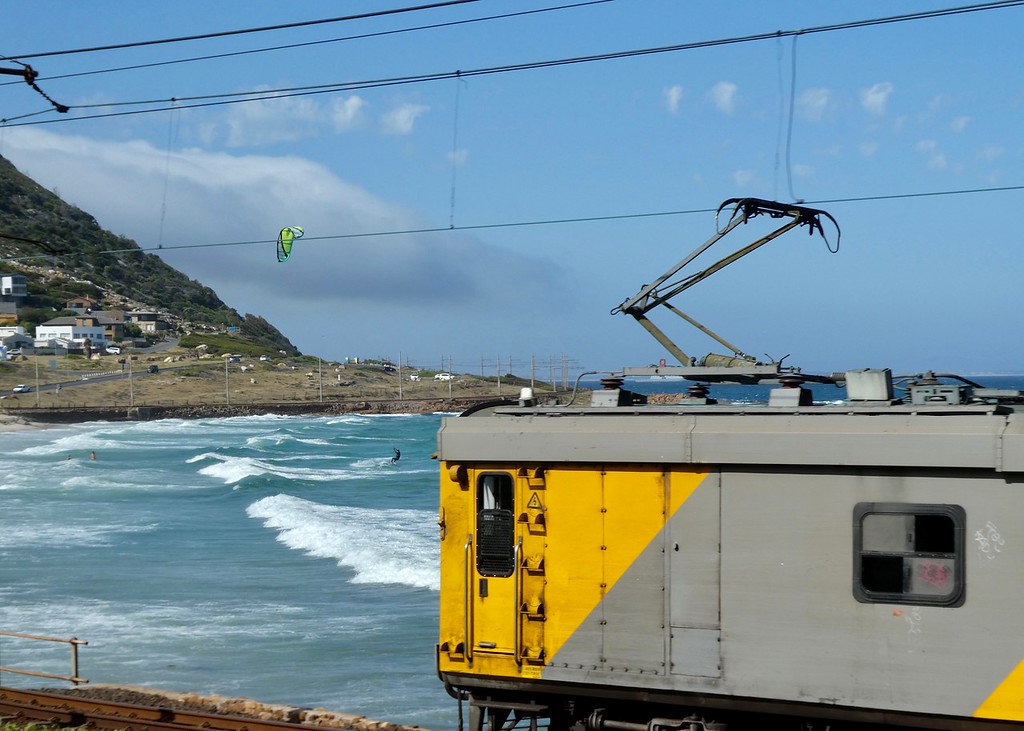 Getting closer to Cape Town

Once back in Cape Town we went to the waterfront, had dinner at Ginja, and then caught a bus back to our hotel. The refugee crisis near our hotel was becoming “interesting”, as the police were handing out eviction notices and the refugees reacted by chanting and generally ignoring the police. This was a clear indication that I ought to go to sleep with ear plugs in – and I’m glad I did!