Morning came early – much too early. The room, although comfortable, left some things to be desired. Throughout the night there was the sound of a fan or machinery constantly running. The cool market that was taken down yesterday evening was being reconstructed – at 6 am. And that was after a small city truck power washed the entire square, the whine of the water being forced through the hose infiltrating my dreams. I got up reluctantly, but once out of bed, I was ready to go.

It was another unplanned day in Cape Town. We had a better idea of where to go and what to look for so we made better use of our time. This was mostly just wandering the side streets and further along the waterfront, checking out the boats and boat yards. I hadn’t realized that Cape Town was such a well-respected manufacturer of boats, and it was nice to see them in their home environment.

Here’s an interesting observation about pedestrian traffic in Cape Town: like the drivers, the people are pretty consistent in staying on the left side. It was an easy habit to adopt, once you knew it was expected of you, and it made navigating the city’s streets that much more comfortable.

Another interesting observation was the massive number of security personnel at private businesses. Almost every business we passed had someone standing by the door, ready to keep away “unwanted customers” or make sure that “official customers” were not harassed. There was even the added security at some places where the gate was locked until the security guy opened it from the inside. We experienced this ourselves when we wanted to visit the local camera store near our hotel.

Found a bakery near the hotel – Rosa’s Bakery 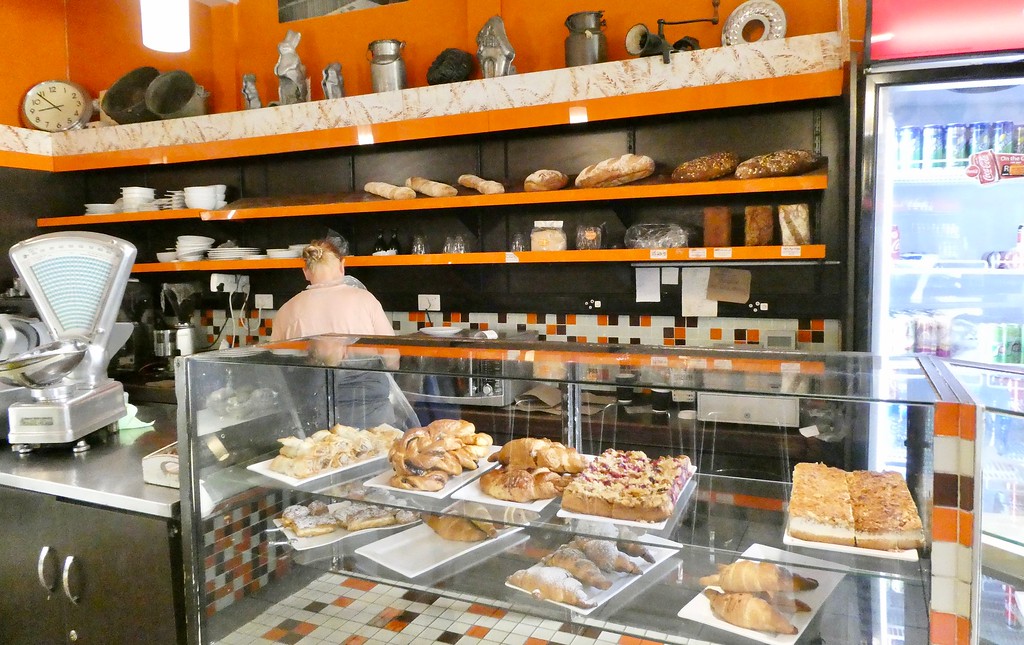 An art gallery we did not visit 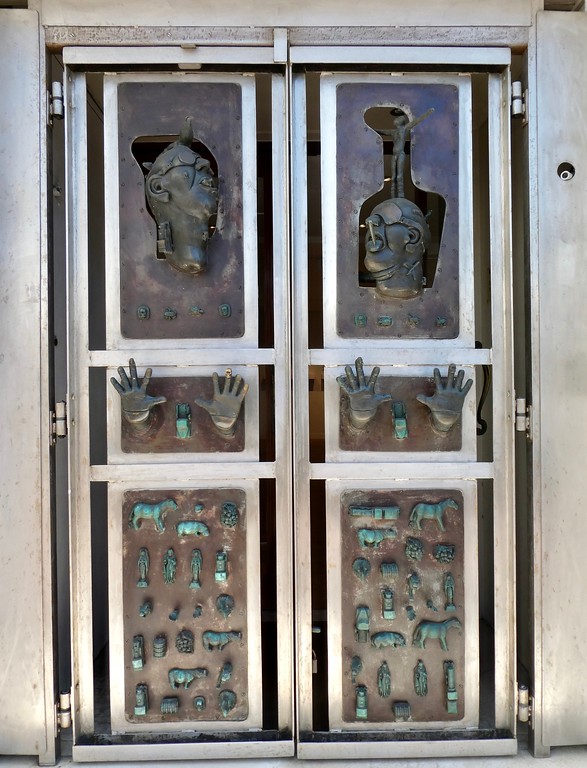 Our walking took us to many varied regions of the city, many of them I’m sure not usually visited by non-locals. We decided to check out the Castle of Good Hope. This seemed almost pointless, considering that we live in the Land of Castles. But hey, it was a point of interest and we were interested. 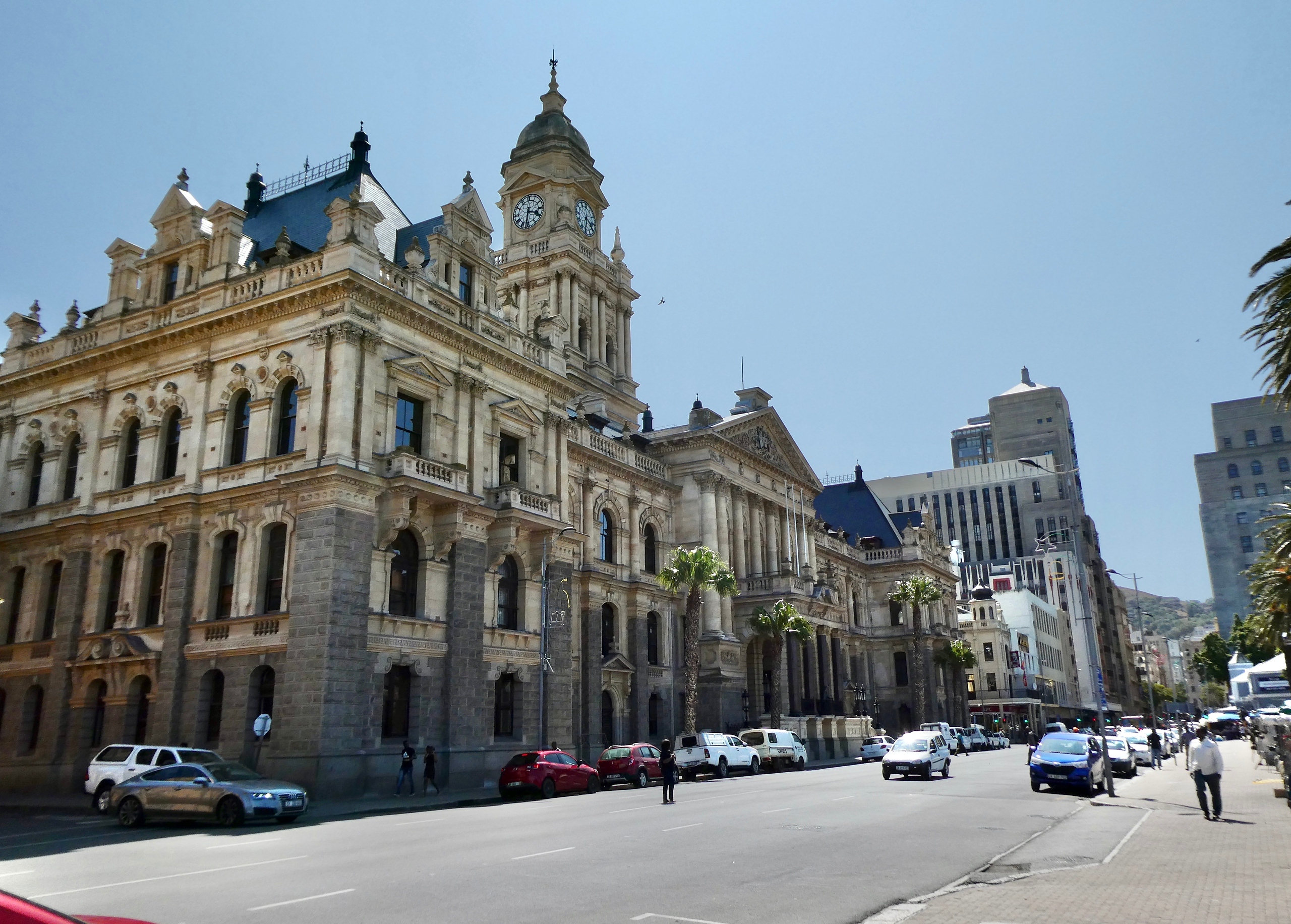 We somehow walked right by the entrance to the castle and ended up circumnavigating the entire building and adjoining properties. This led us to an interesting area: the back side of the train station. Our walk took us on an overpass that was chalk full of South African shuttle buses. Full! To the point where the one next to us pulled its wheel up onto the curb in order to squeeze around another one. And then I noticed that there was one coming up behind us, 100% on the sidewalk and looking to advance past us. It was easily half a kilometer back up of shuttle buses, waiting their turn to collect people from the station.

Our walk took us almost to the container port, past the Arts center, the hospital, the Civic center – and to our first serious begging encounter, although “serious” is really an overstatement. The guy was polite enough, and never tried to stop us or touch us. But he was insistent. He followed us for about five blocks, all the time saying how life was unfair and that the U.S. was causing wars, and how he just wanted a little help. We kept on walking, told him “No”, and eventually reached the shelter of a cafe. The beggar wouldn’t be tolerated if he tried to come in, so it was a short-term haven for us. The guy eventually gave up on us and started to hassle someone sitting at the neighboring restaurant before he was run off by the staff.

With the coast clear, we stepped back out onto the streets, heading for our hotel. The winds were quite strong and the market guys were having the devil of a time keeping their stuff from blowing away. Some of the displays were already blowing over, and the refugees were scrambling to make sure that their shelters didn’t fall down as well.

From what we heard from the locals was that even though the wind was blowing hard today, it was nothing compared to what the region had experienced three days ago, with gusts up to 50 kph. Today they were only 35 kph. Actually, the winds were cramping our style in the “tourist” portion of our holiday: the cable car up to the top of Table Mountain was closed due to the high winds.

I did a quick Google check on “best place to watch a sunset” and the name “Camps Bay” came up. It wasn’t too far from us, there was a nice beach, and – bonus! – there was a well-regarded seafood restaurant. We called up an Uber and were striding across a sandy beach half an hour later.

The water was cold – really cold. Even the little tidal pools were a shock to my naked feet. I could not imagine being in that water for any length of time. But the sunshine felt good and the fresh breeze kept me from feeling like my skin was burning. And my skin probably was burning, despite my efforts to keep it protected. High winds picked up the soft sand and scoured it across the beach, painfully abrading it on my legs. These were not the best conditions for laying out on the beach. Good thing we had actually come for dinner!

We walked across the street and made our way up the steps to The Codfather. How could you go wrong with a name like that? The host came over and asked if we had a reservation. “Um… no?” “Oh, I’m sorry. Do you mind sitting at the Sushi bar?” This was hardly a bad thing. The little sushi conveyor belt rolled in front of us, endlessly offering up bowls of freshly-made delicacies. 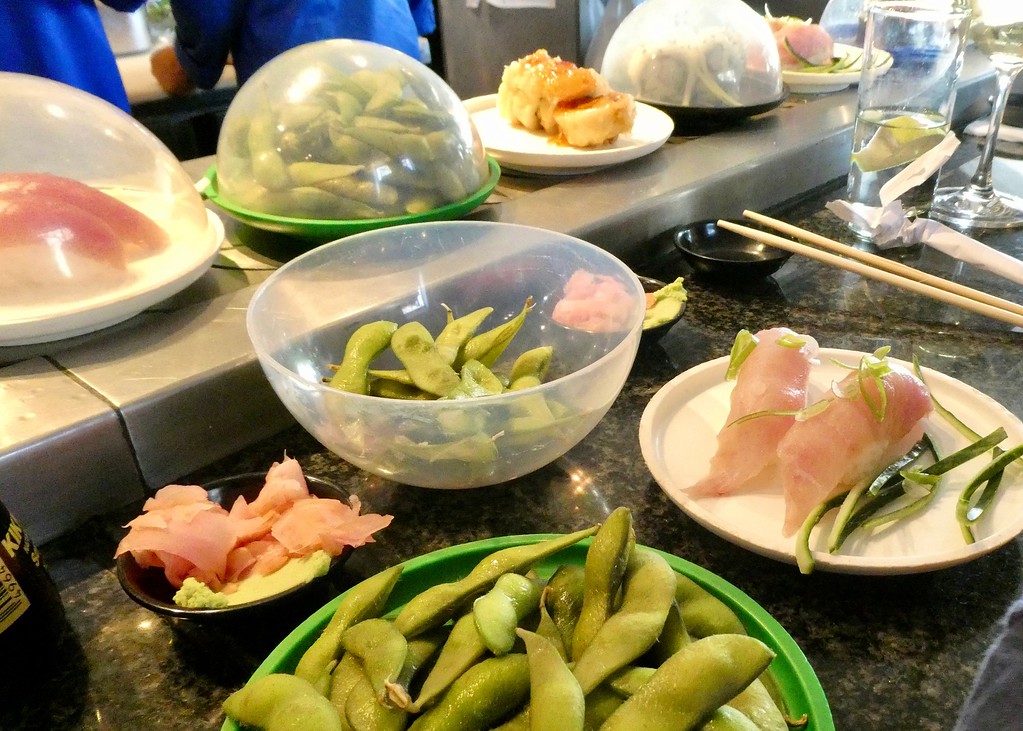 The sushi was made fresh before our eyes

I instead chose something from the fresh fish display on the other side of the restaurant, enjoying some rich and tender flaky fillets of fish that I’ve already forgotten the names of. While we ate, an older gentleman took the seat next to me. He seemed a little confused on how the sushi train worked, so I was surprised when he told us that he lives in the area and has come here many times. He was surprisingly talkative – especially when he told us that he is originally from Switzerland! He is retired and splits his time between the two countries and gave us some interesting insights into his choice of residence.

After our meal, Dan and I dashed back across to the beach in order to catch our Atlantic Ocean sunset. We were not alone. 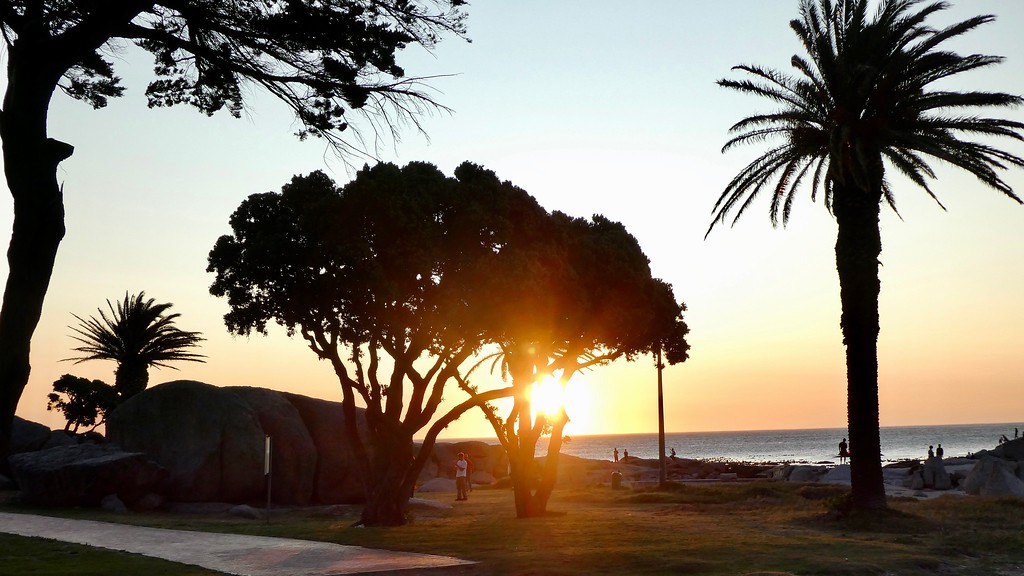 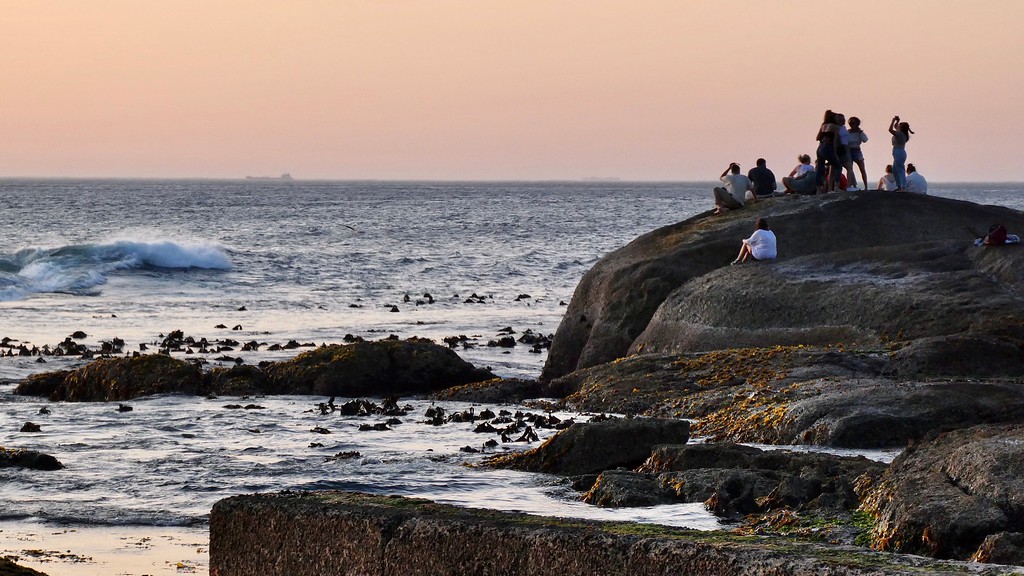 Slightly off-topic: super zoom to check out the top of the Table Mountain cable car, sitting on the mountain behind us 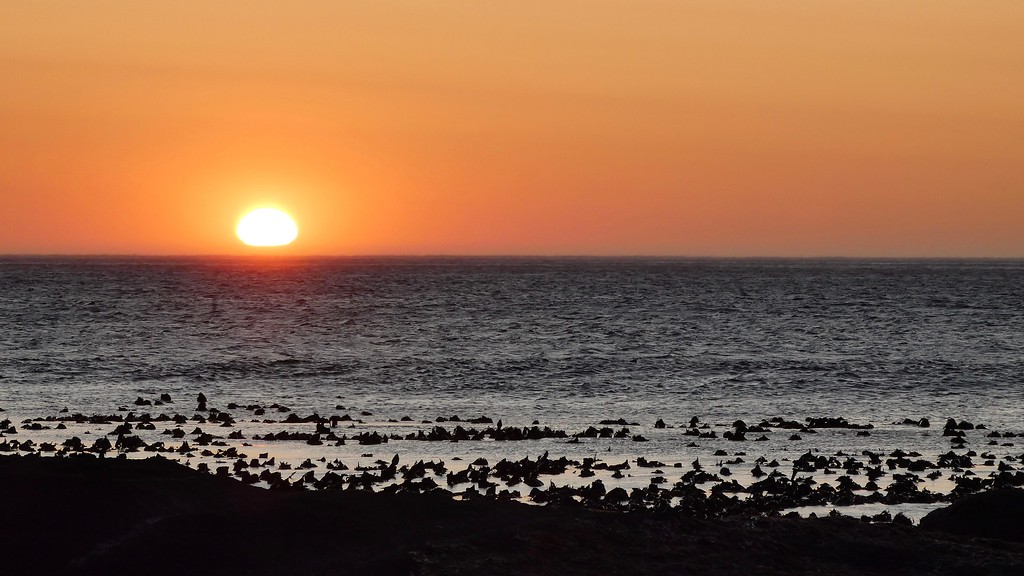 As soon as the sun was out of sight, it looked like everyone got into their car to head home. We called an Uber and did the same thing. 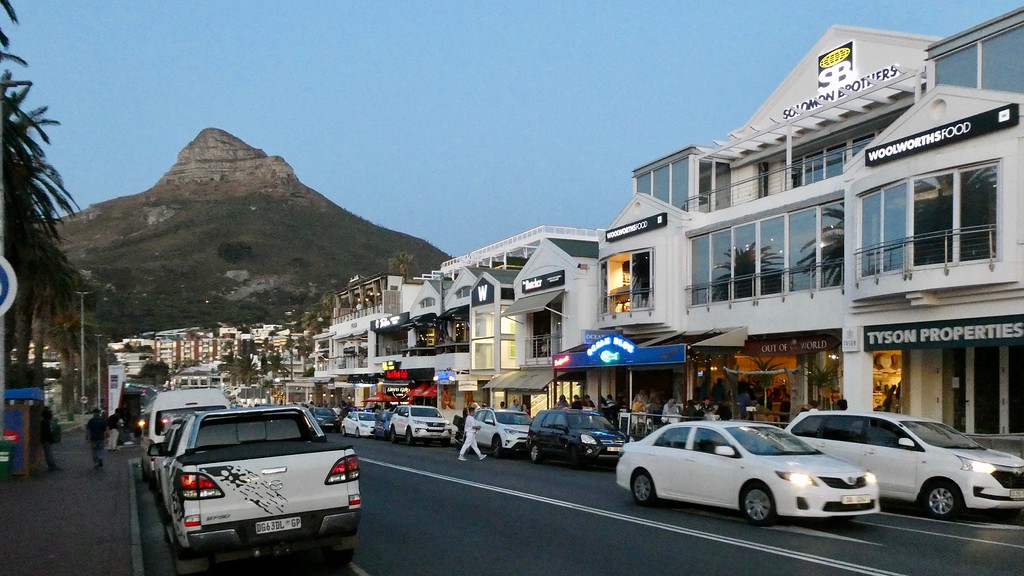 We had enjoyed our second unstructured day in Cape Town, but it was to end: we made firm plans for tomorrow that would take most of the day. It was time to head back to our room and hope for a good night’s sleep in anticipation!