Five thirty was early. But Dan and I got up and met with our driver for this morning’s activities. I could not tell you her name, but it was awesome with a native “click” tucked in the middle of it! Very cool to hear.

The electric fence and active beehives 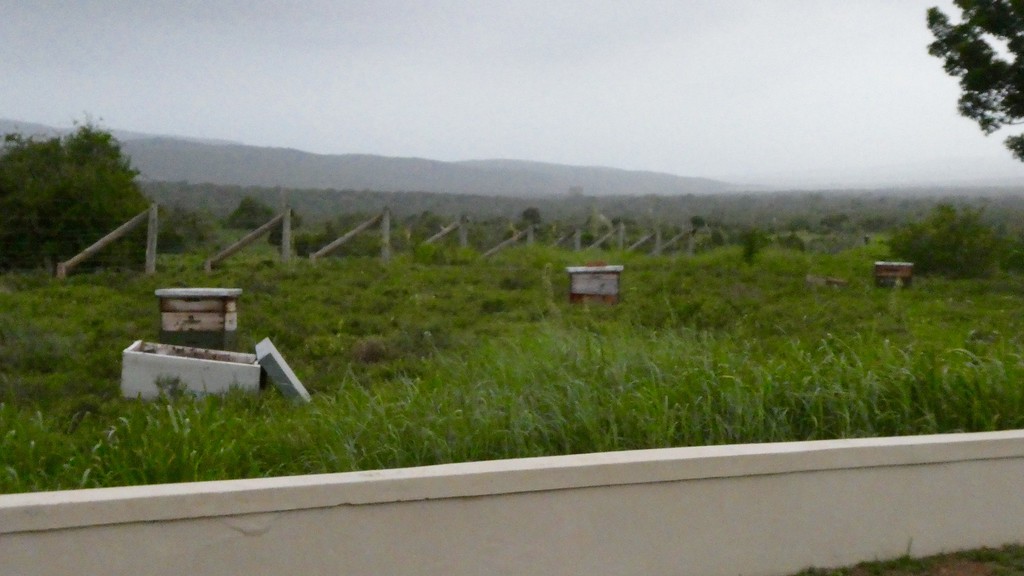 Hana and David had brought their last tour group here, but they said that they hadn’t seen any animals the entire time that they were here. And considering that the tour included the luxury of two nights here, that was saying something!

We set out through the gates with immediate guidance: two male lions had been spotted just a few minutes from the lodge. Because this is a private reserve, there is discussion among the staff as to known locations, so we headed in that direction immediately.

One of two male cubs on the reserve, heading back to momma 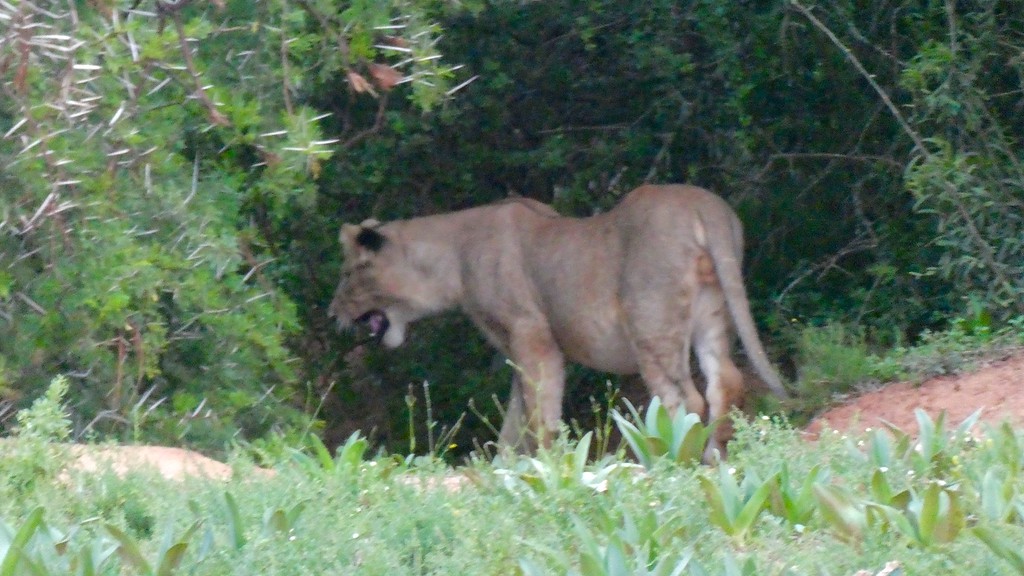 The lions had reportedly caught and ate a zebra the day before, so they had full bellies and really didn’t care if we stared at them with wonder and awe.

Look at that full belly! 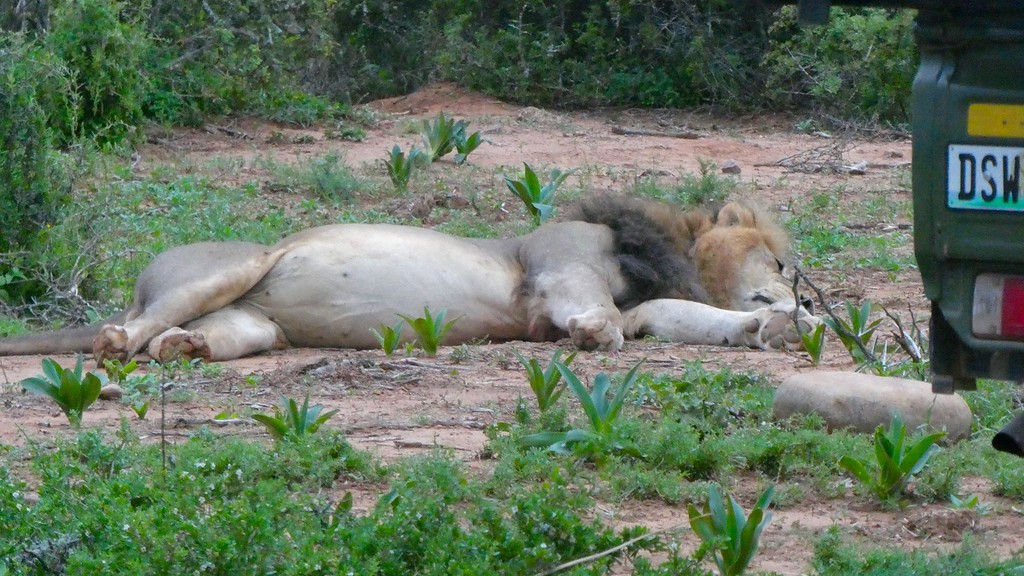 The other safari truck left the area and our vehicle moved into a better position. Not that our first position left much to be desired. 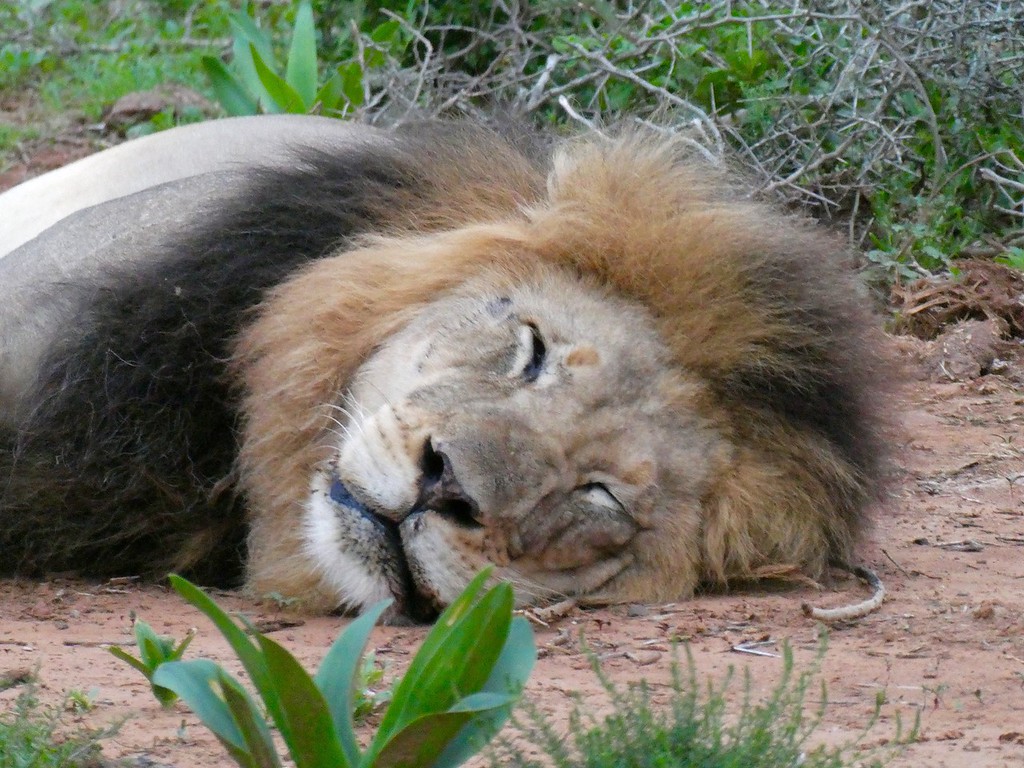 Eventually one of the males sat up and looked around 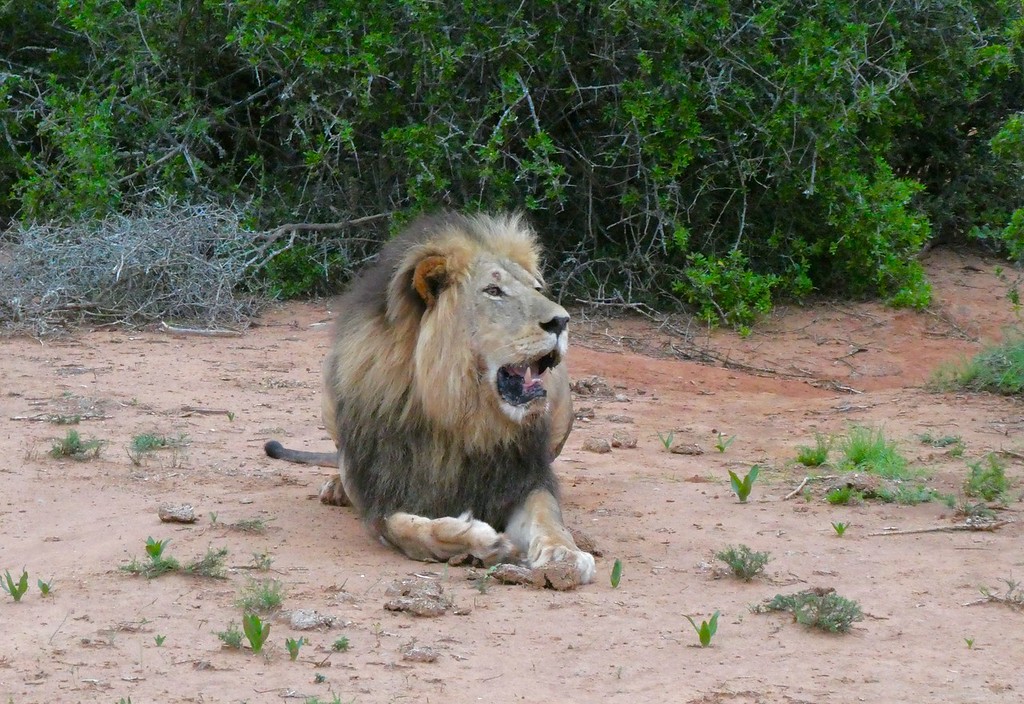 Walking around the front of our truck – so big and so close!

I was in such awe of being so close that I completely forgot that my camera can take videos. Hana took one, so I will see if I can get a copy from her to share here.

Everything about this guy is big 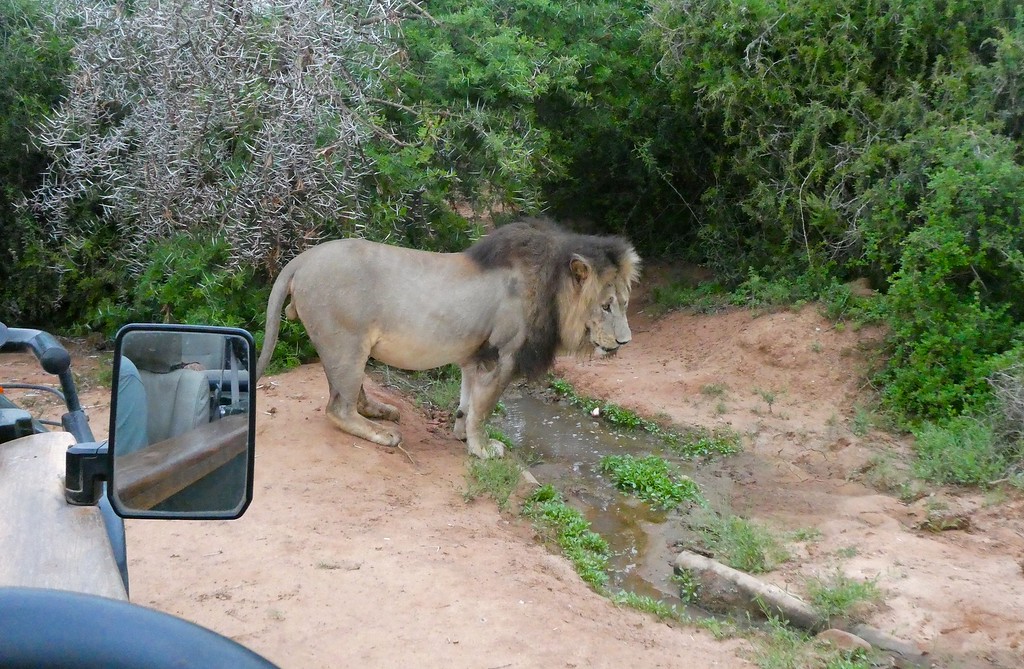 After taking a long lap of water, the lion wandered off to find somewhere else to sleep off his meal. We took the hint and went in search of other animals. It didn’t take long at all before we found a jackal:

Landscape of the reserve 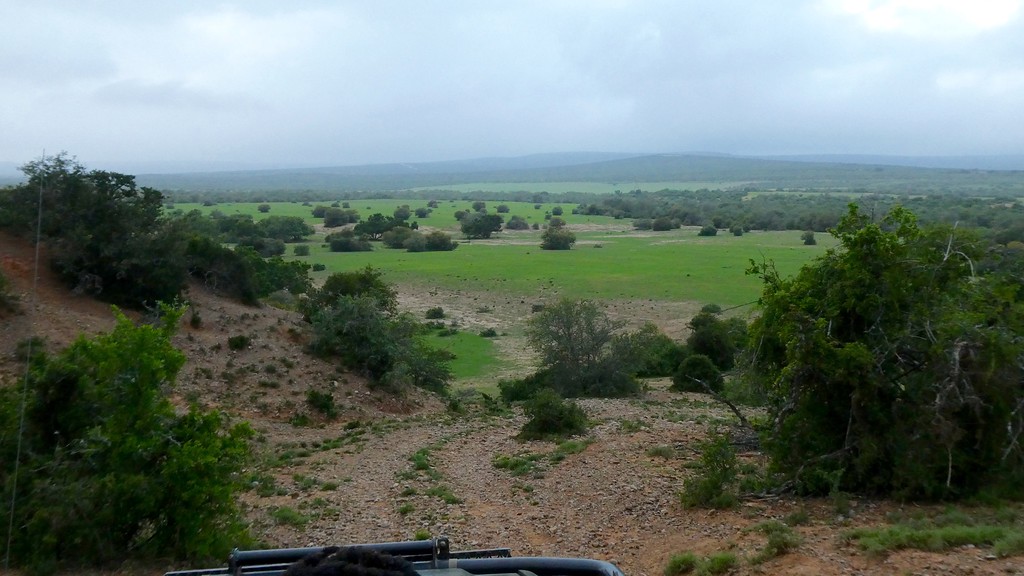 I was pleased to see that today was not yet sunny or too warm. Without the sun beating down on my head, I found it to be a comfortable ride through the reserve. More recent rains also promoted the growth of herbivore foods and filled the watering holes. 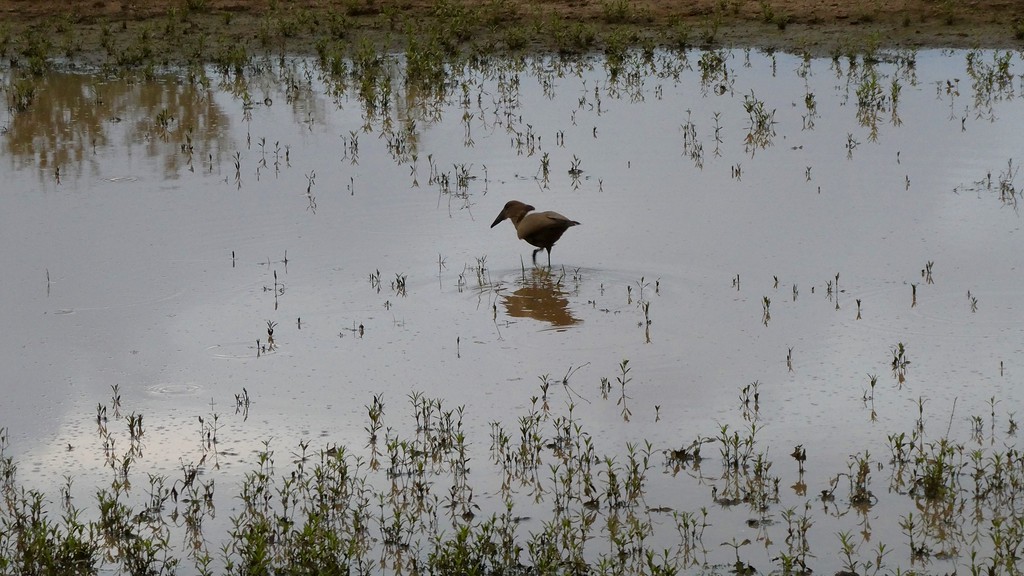 We drove back towards the lodge and then went off in another direction. With almost 35,000 acres of land, we had a lot of area to cover! 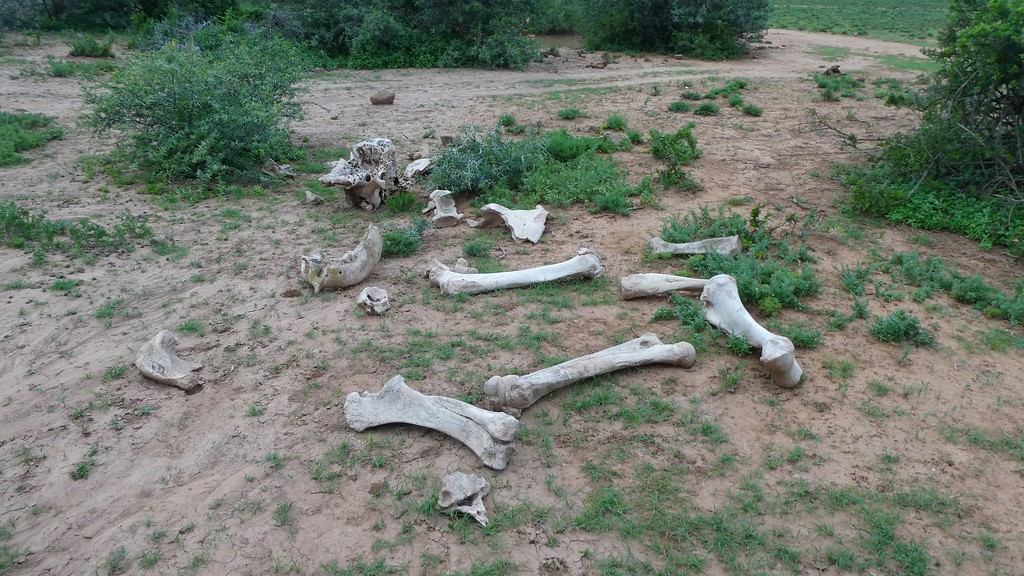 Knowing that the lions were sleeping elsewhere in the park, our guide was comfortable in getting out of the truck to show us some of the native plants found in the region. 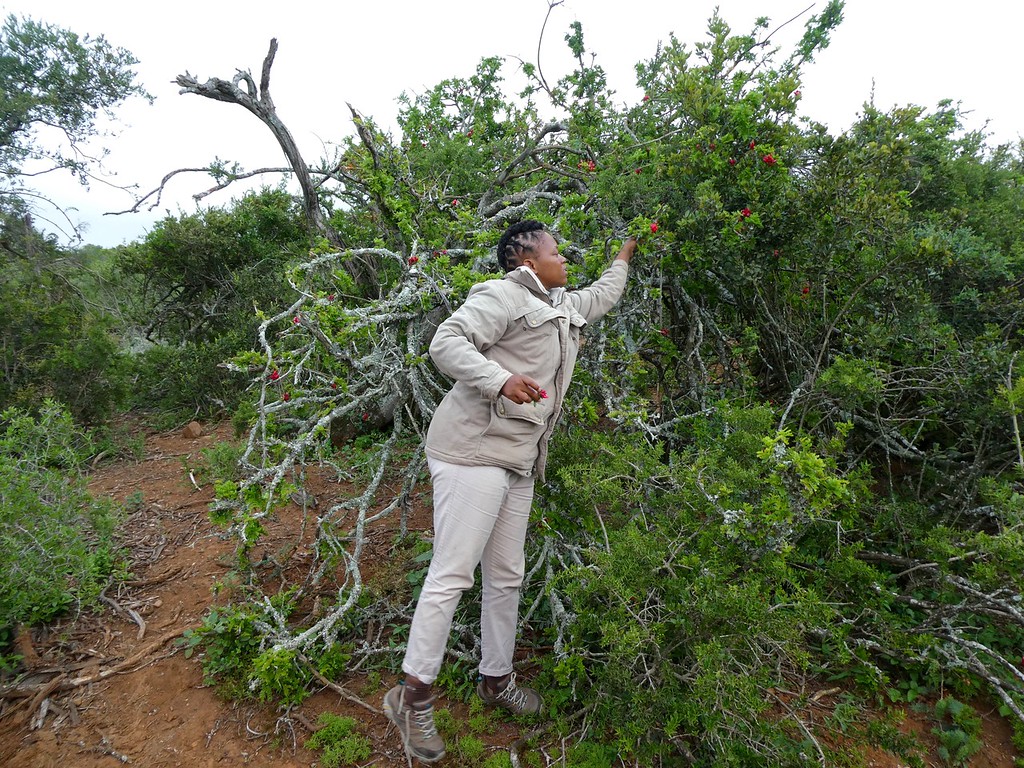 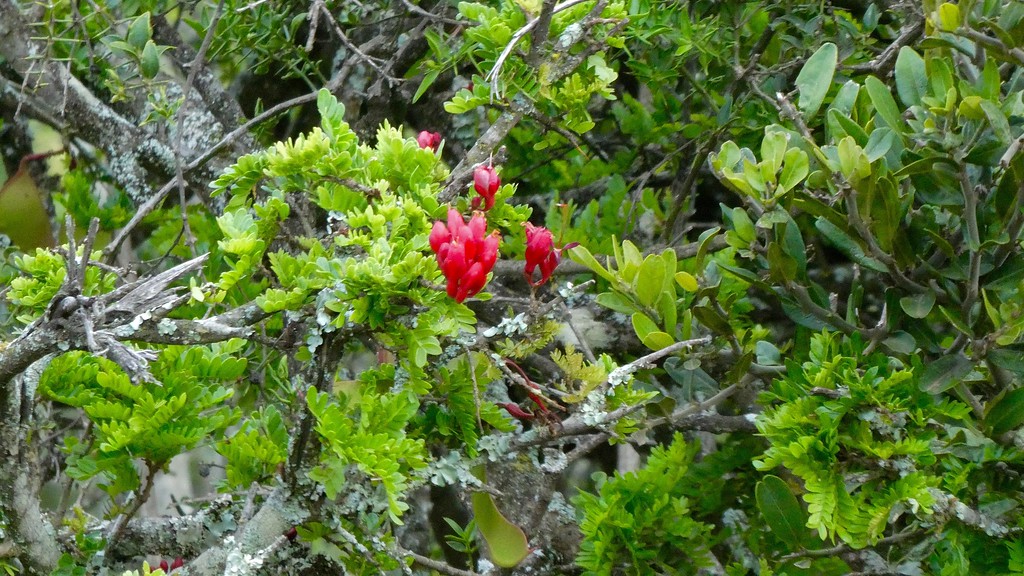 Looking back at the lodge 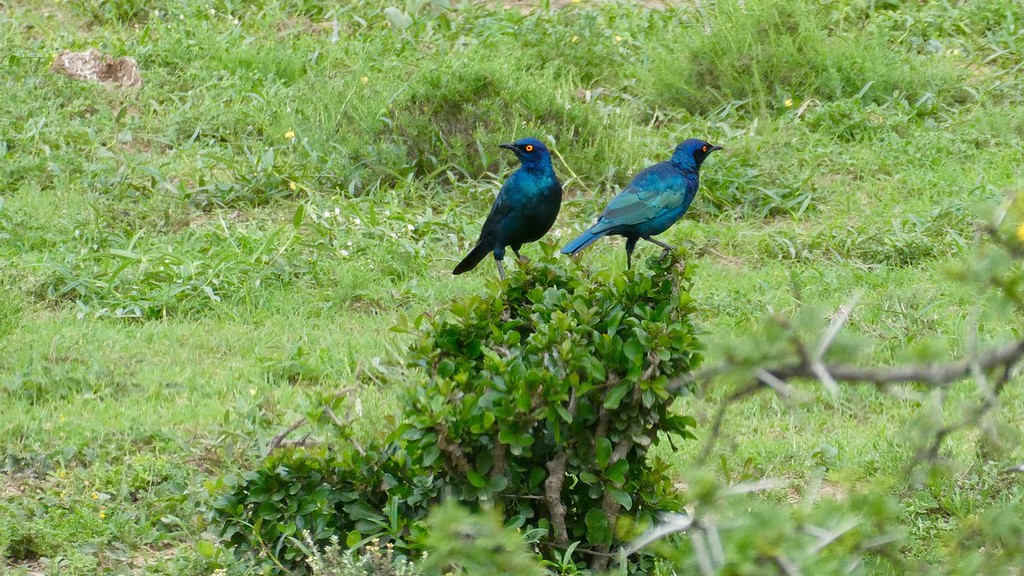 And then we could see them: a couple of elephants rumbling around in the bushes. Our guide pulled our truck (the “human rhino”, as I liked to think of it) down a lane and then passed some tall vegetation. We had found the elephants. 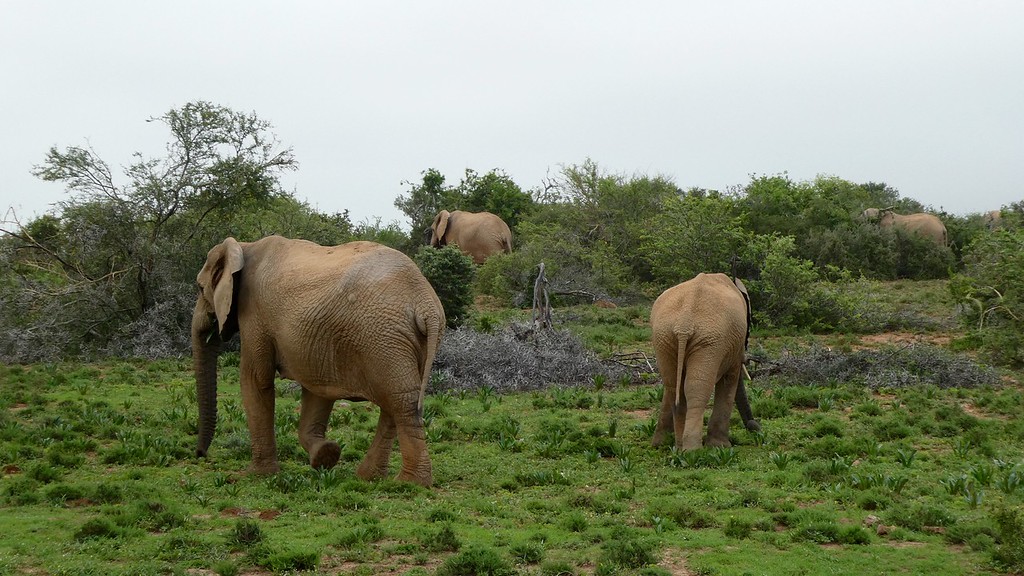 They say that while on safari, you have the best chance to see animals during a drought because they all congregate at the dwindling number of watering holes. But during a drought there is also a lot less food, so the animals that you do see are often thin, or sick. Personally, I’d prefer to take my chances on not seeing any animals if it meant that they were healthy and well-fed. On this trip, I scored on both accounts: lush vegetation and many healthy animals were seen. 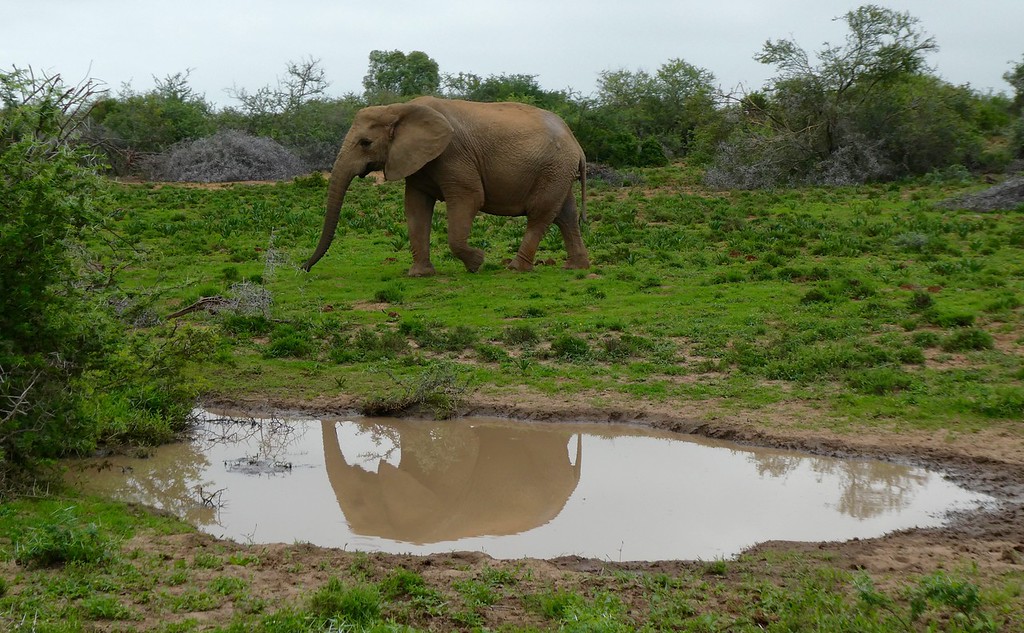 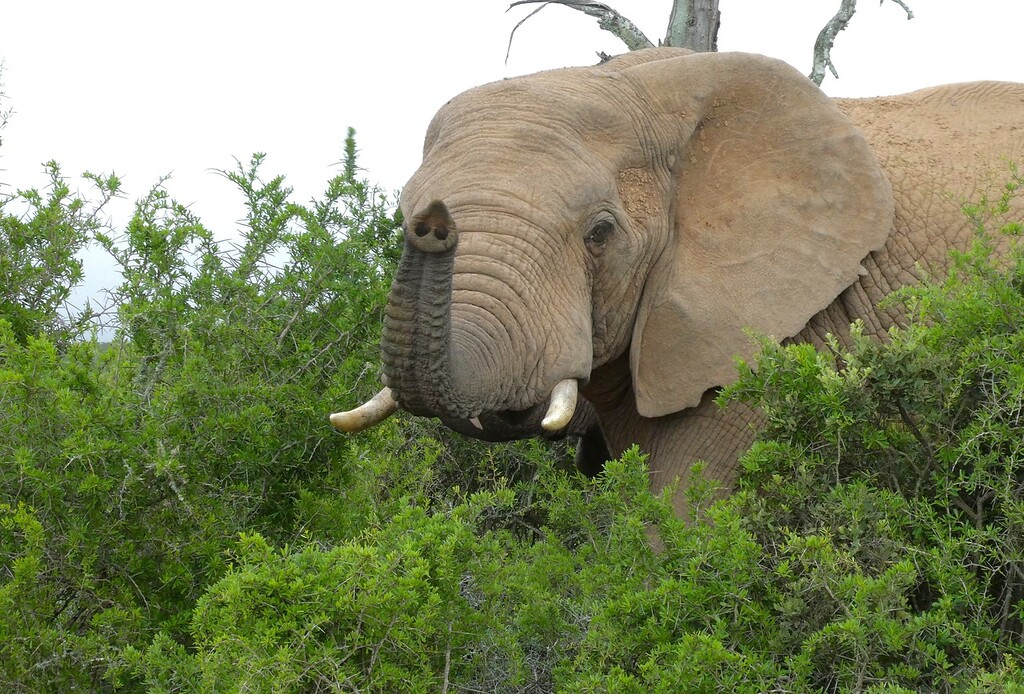 Just looking for a willing partner (he was in musth) 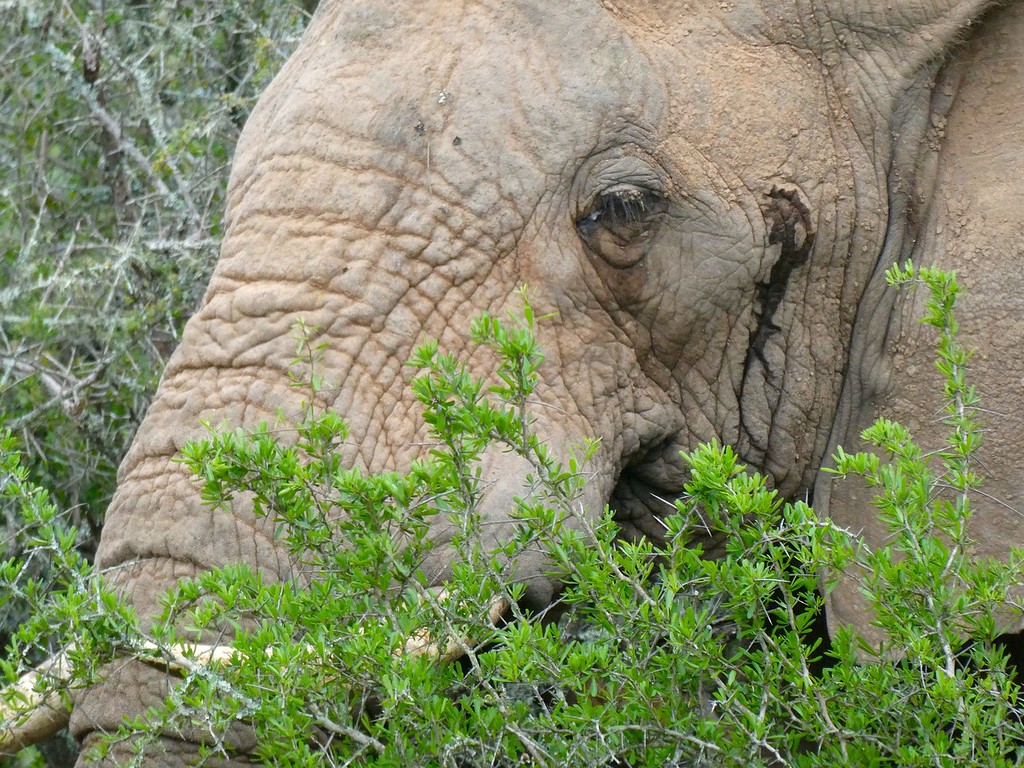 We followed the couple of elephants we had first found and they led us into an opening with even more elephants. There were probably at least twenty elephants in this group, of both sexes and of varying ages.

Video of elephants and our proximity to them

I love it when the young ones get feisty and stick out their ears!

Probably one of the better photos I’ve taken 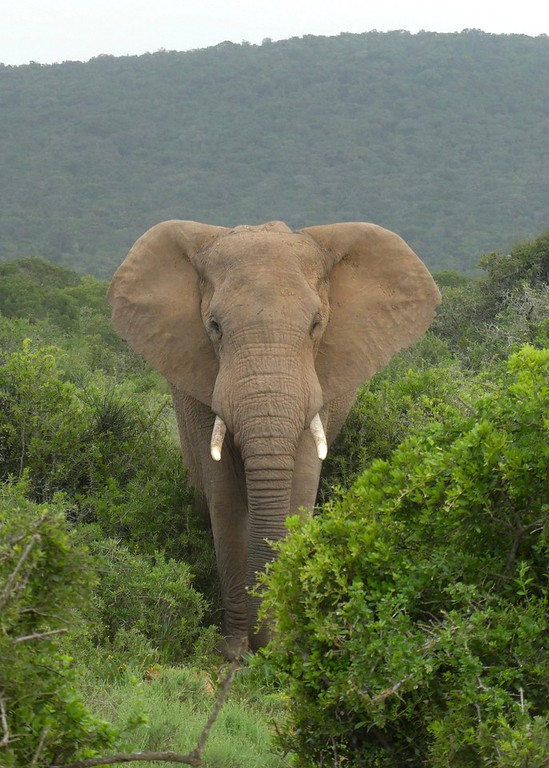 The detail of an elephant butt – who knew it would be so interesting?

Our guide followed the elephants for a little bit longer, trailing behind them as they made their way down the road. To my uneducated eye, it seemed like we were following too closely, but I like to think that the driver knew what she was doing.

Video as we followed the two above

I took a lot of photos – they were so amazing to watch! 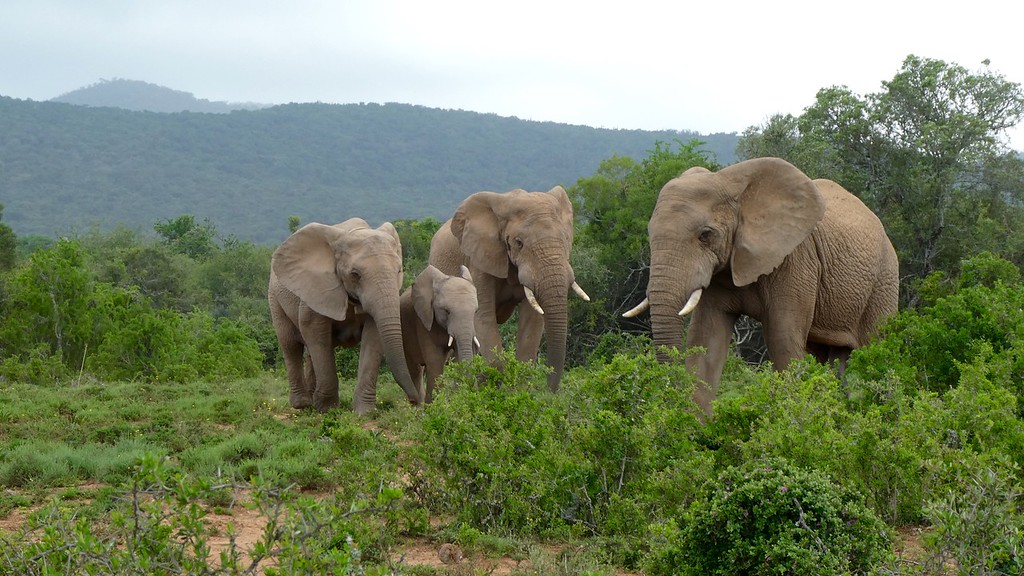 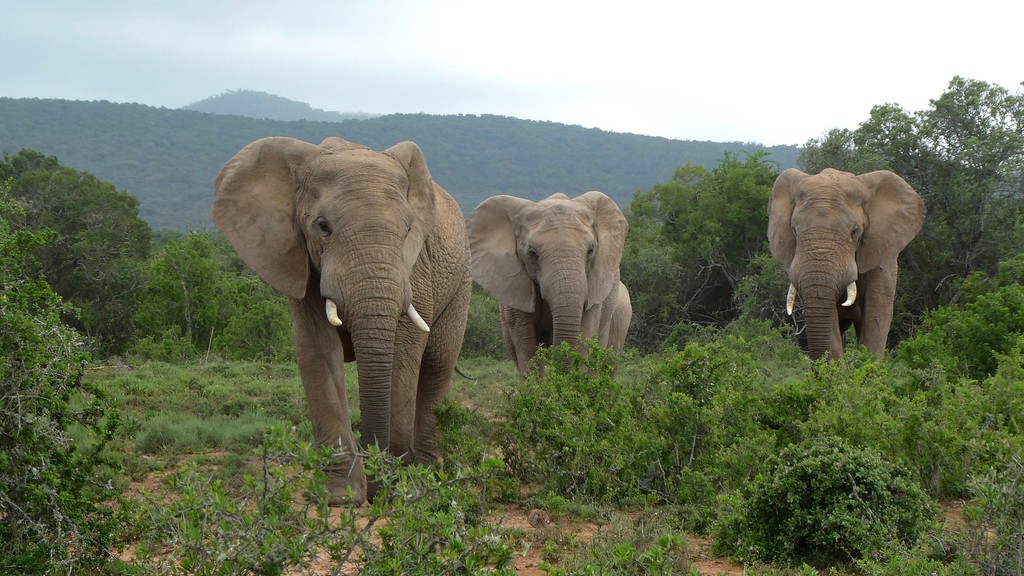 While I could have watched these creatures wander the landscape for hours, I doubt that the elephants would have appreciated it. We slowly pulled away and went off to see who else was out enjoying the still-overcast morning. We didn’t have far to go when we saw this distinctive guy:

While we watched the zebras chase each other in the morning dew, it was time for a tea break. Like we did in Gondwana, hot thermoses were pulled out and tins of biscuits cracked open. Ah, this is the life. 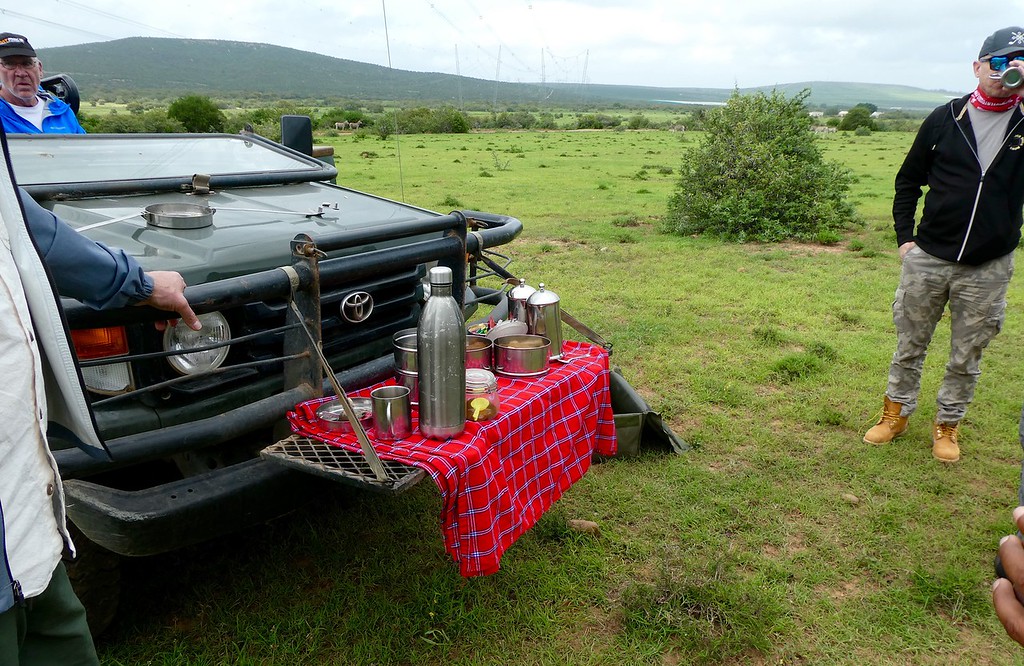 More thorn bushes – that could be painful!

As we traveled down the main road I spied a different large group of elephants off to one side. I guess one could say we were on a “trunk” road (thank you – I’ll see myself out). The zoom lens came in handy here, as the group was fairly far off in the distance.

And then we spied her: a tiny baby lost in a sea of legs and trunks. Our guide estimated her age to be about 2 – 3 days. Days! 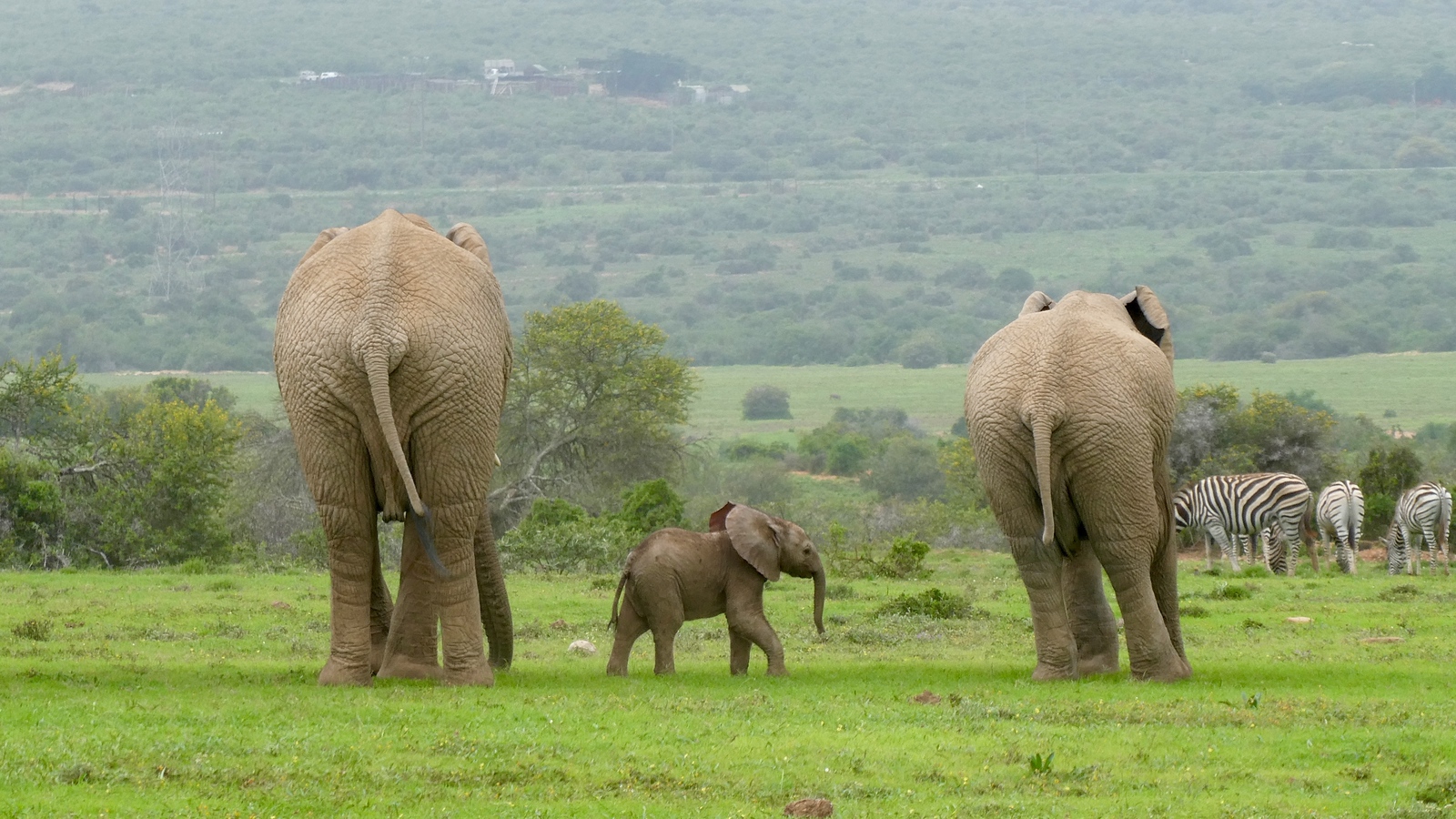 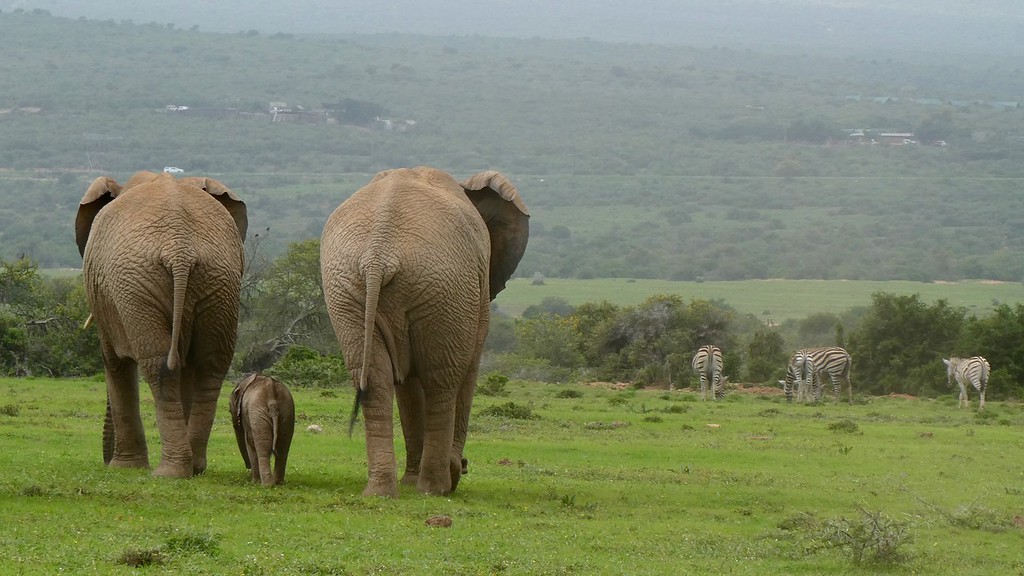 Video of the baby staying under momma

Video showing the protection of the herd

Our day had been fantastic – and we hadn’t even had breakfast yet! After watching the baby and her (I have no idea if it was male of female, to be honest) antics, we put the safari truck back on the trunk road (yes, I am finding this amusing) and meandered our way back towards the lodge.

Our morning safari was over. It had been a grand three hour tour of the River Bend reserve, and I felt very lucky to have seen as much as I did.

Back through the lodge gates

The rest of the day was ours to do with as we liked. There was a lovely breakfast on the porch while we watched yet more elephants wander by. Oh, and the power was cut during breakfast as well. Apparently this location suffers load shedding twice a day, for two hours at a time, which happened to be during breakfast and dinner. 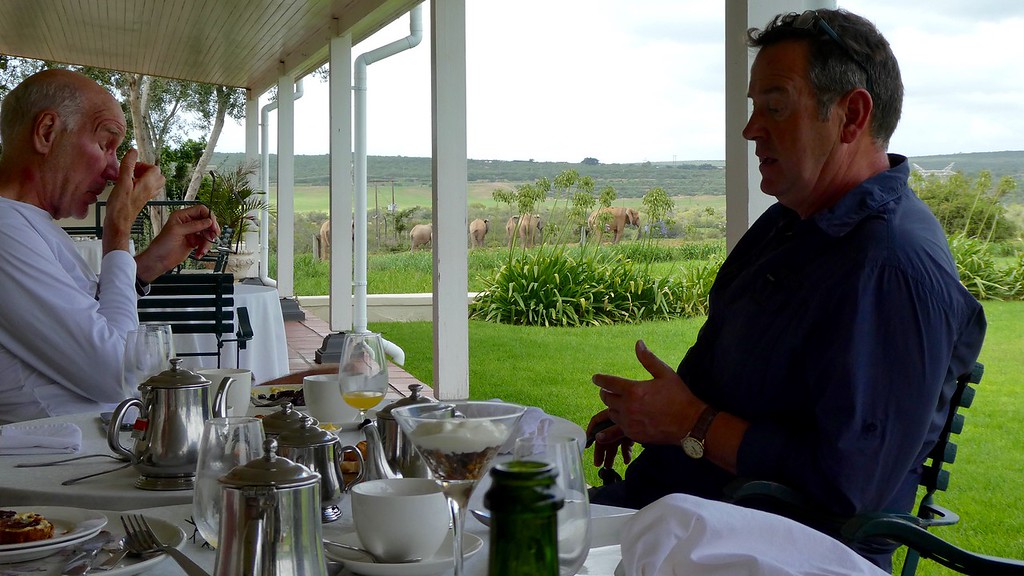 Nests of the southern masked weaver 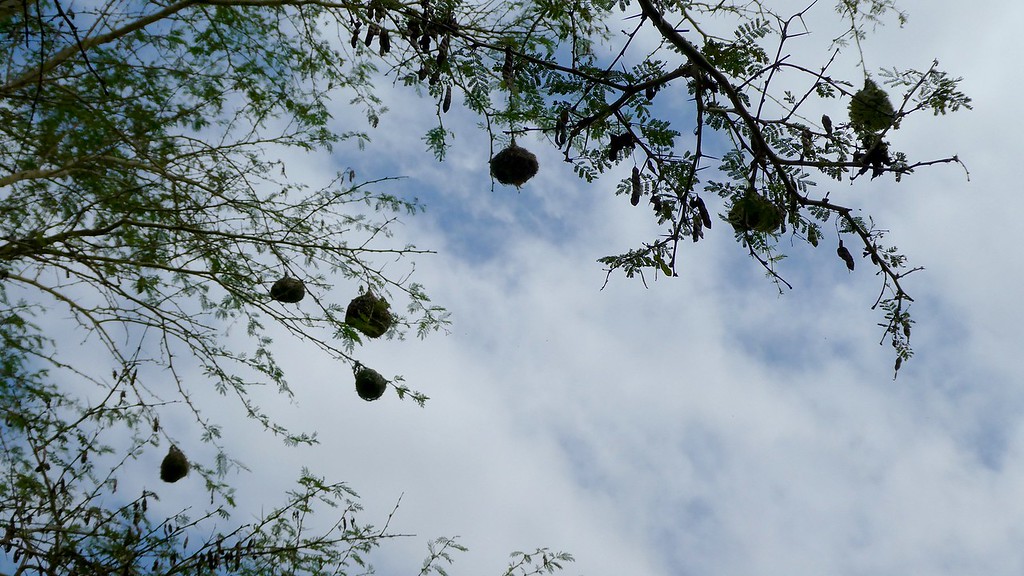 Another Leopard tortoise, eating the garden

I still can’t get over the size of these thorns

And then it was nothing but relaxing, be it by the pool, resting in our rooms, enjoying a late lunch or going through the photos that had just been taken. For Hana and I, it was a shorter break than for the guys: we had opted to go on a bonus afternoon safari. I had seen so much already, but there was always the potential of “more”. Plus, how often would I have this opportunity?