I had been waiting for a trip like this ever since we moved to Switzerland: two weeks dedicated purely to exploring a section of Europe on the motorcycle. Now it was finally happening!

Dan was worried that we wouldn’t be packed and ready to go at a reasonable time on our planned departure day, Saturday. But while he was working late on Friday, I was working on getting all of our stuff together. I didn’t want to delay by a full day simply because of such a silly thing; we had places to go! The next morning we were packed and on the road around ten o’clock. Excellent!

The bikes were packed to the gills. Part of our trip plan was to visit with friends of ours and do a little hiking, as well as possibly some via ferreta. That meant that we packed more than we normally would, as I included the harnesses, helmets and carabiners needed for via ferreta climbing. These went into their own bags, along with our mountain boots, hiking poles, hiking pants and jackets. This way we did not have to bring them into the hotel room at the end of the day and made things a little easier to manage. 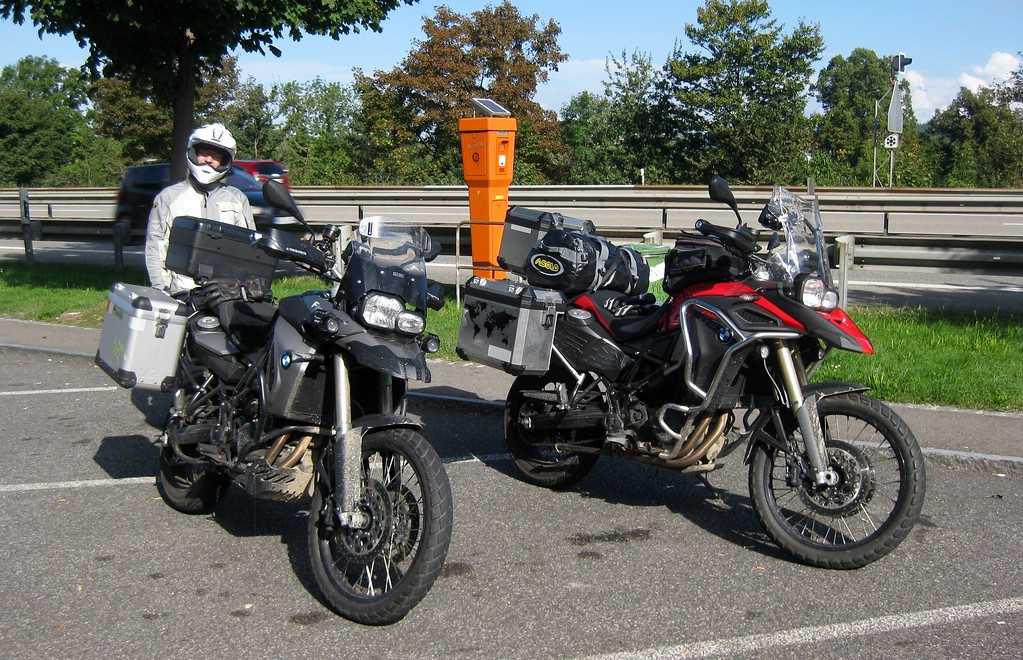 Leaving Basel with Kernkraftwerk Leibstadt steaming in the distance

Ah, this is good weather

My route took us across Switzerland on the most direct path possible. The day was pleasant and the roads were clear. In just a couple of hours we had left Zürich behind, ridden past Walensee, skirted the southern border of Liechtenstein and passed through Davos.

Walensee in the background 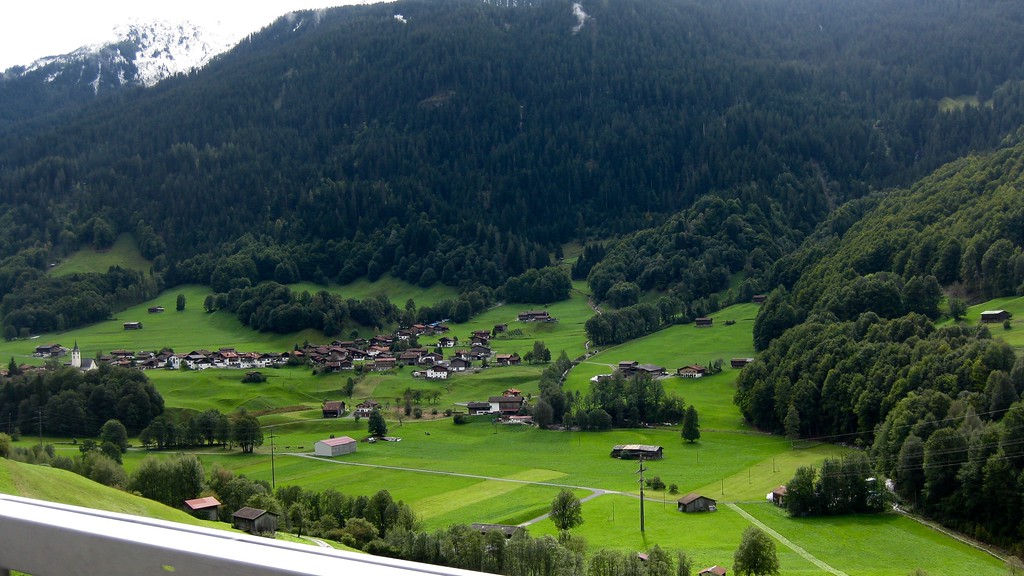 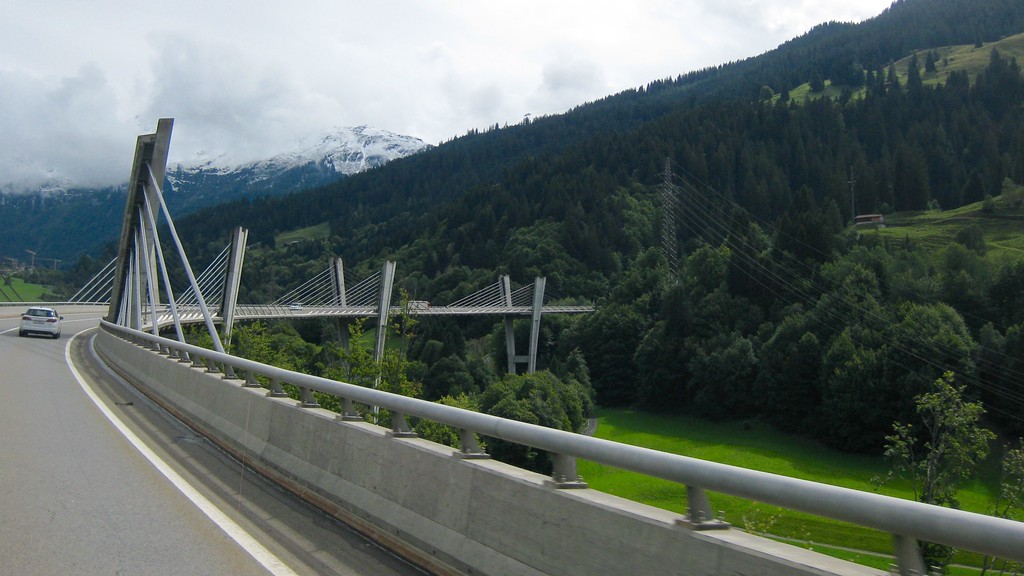 All that was left were some mountain passes and then we’d be in Italy. The temperature, which had been cool, began to drop even more. The clouds moved in and it wasn’t long before the landscape around us turned white: snow! I hadn’t expected that, to be honest. We watched our BMWs’ temperature gauges drop further and further, finally dipping to a low of -2C. It was lightly snowing as we crossed over Flüela Pass (elevation 2,383 m). The road surface was wet but our tires seemed to be gripping ok. Dan and I discussed the possibility of ice on the road and kept our speeds down. I was pleased with my Gerbings heated jacket, as the riding would have been very uncomfortable without it. There was almost no traffic and we had the road to ourselves as we dropped down the other side of the pass, where the landscape became green again almost instantly. We crossed over one more pass (Fuorn Pass, elev. 2.149 m) – fortunately without so much snow – and then we were in a wide, green valley and ready for lunch.

The first evidence of snow! 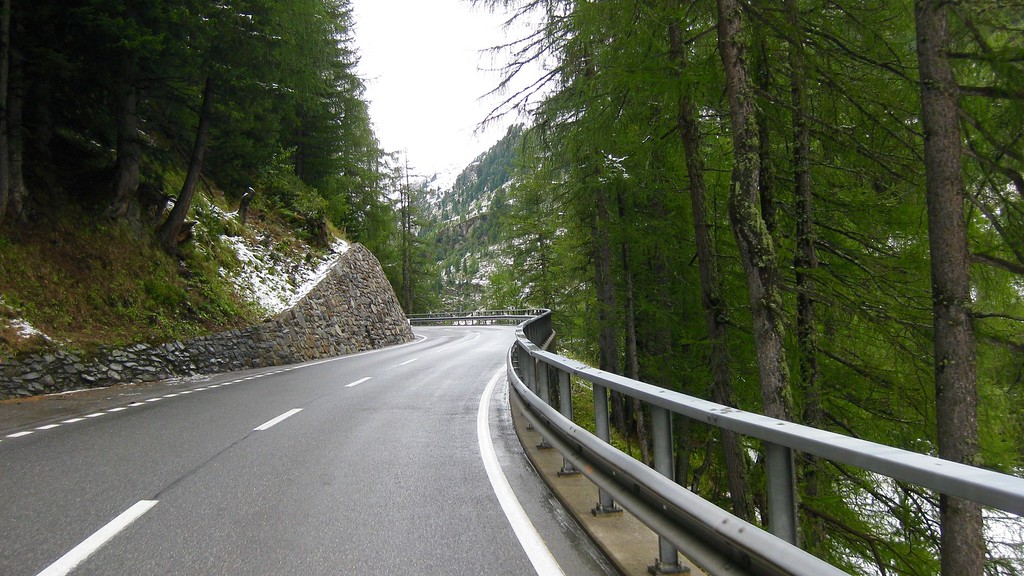 A little further up – Flüela Pass

Still more clouds in our future 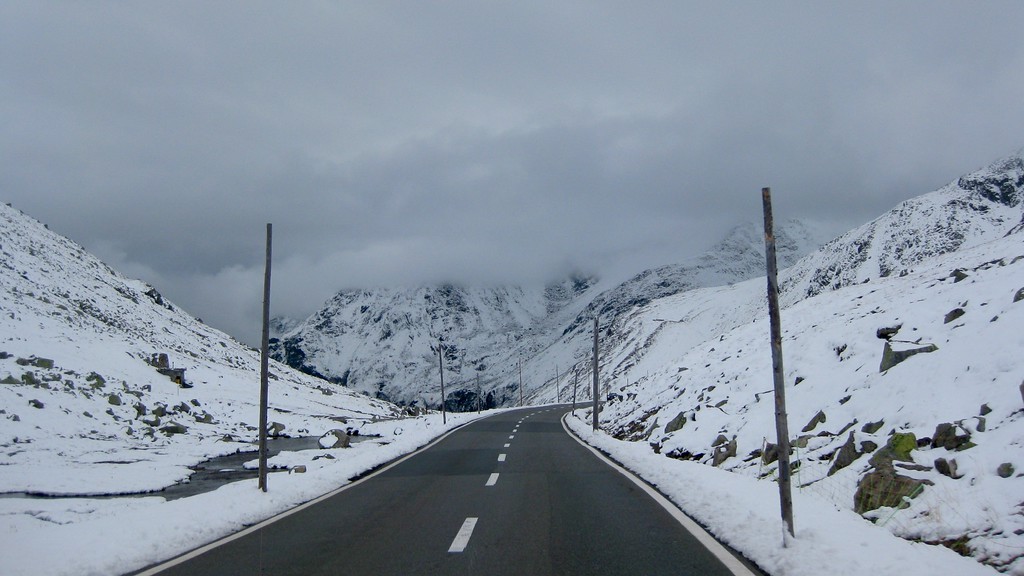 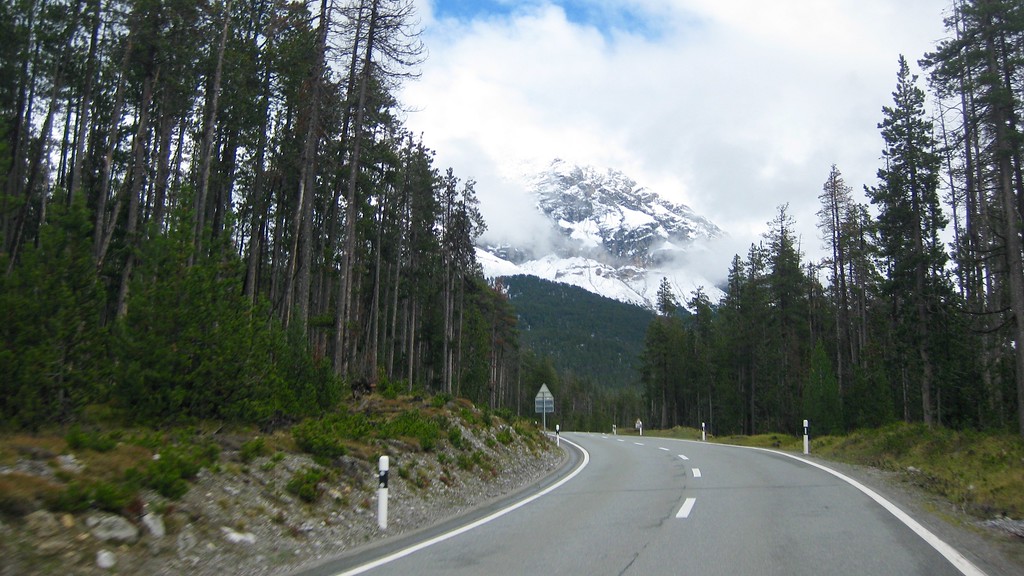 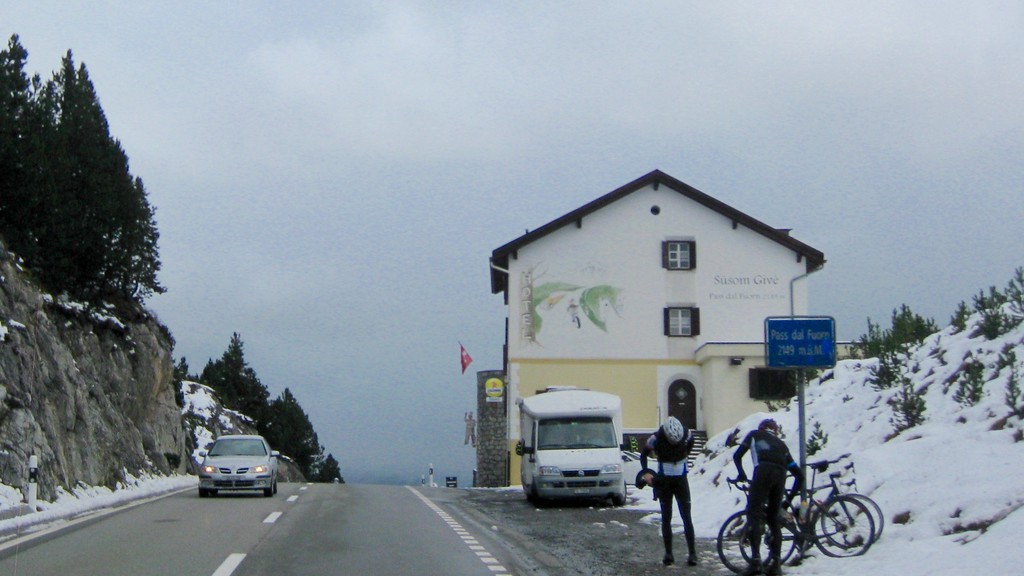 My routing had us originally going over Stelvio Pass, but it was an even higher pass than Flüela and guaranteed to have snow. While it would have been nice to see this pass, since it gets such rave reviews from fellow motorcyclists, I figured that it would be pointless to take it on this day. There would be no views and the switchbacks would have produced even more anxiety. Clearly I will just have to come back during better weather!

The day went quickly after our lunch stop. We crossed into Italy and then rode along wide agricultural valleys to our planned destination: Eggen. We were in a busy agricultural area and there were many others on the road with us. The main crop in the valley was apples and the hillsides were full of the twisted trees, grown along trellises in densely packed fields. We saw what looked like purple apples in the trees, but who has ever heard of purple apples? Dan and I discussed this as we followed the line of traffic through the valley. If anyone has any answers, send me a message!

Passing through an Italian village 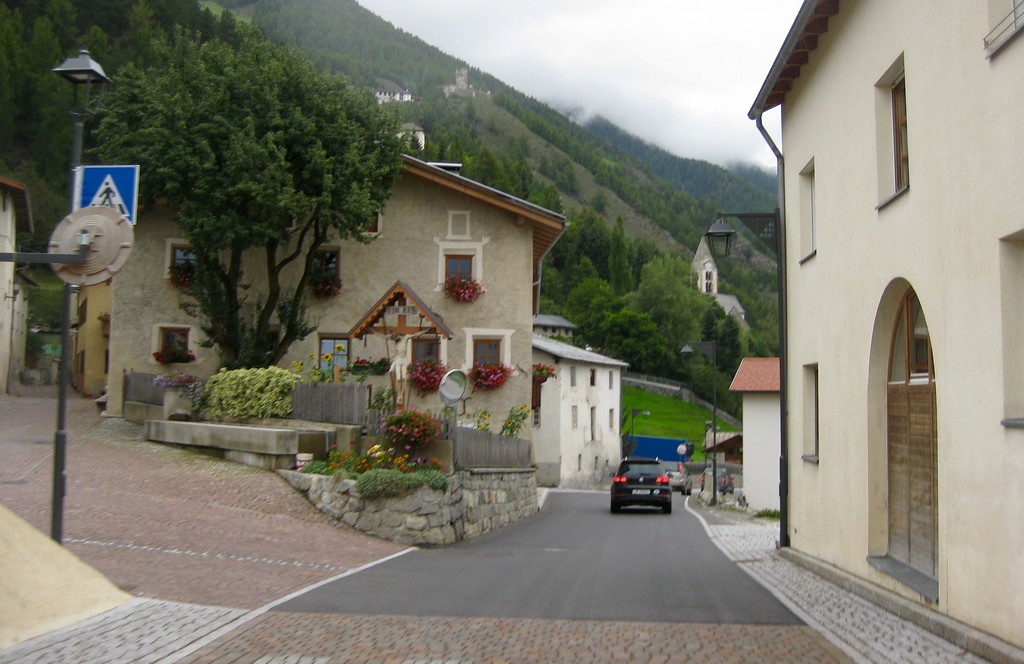 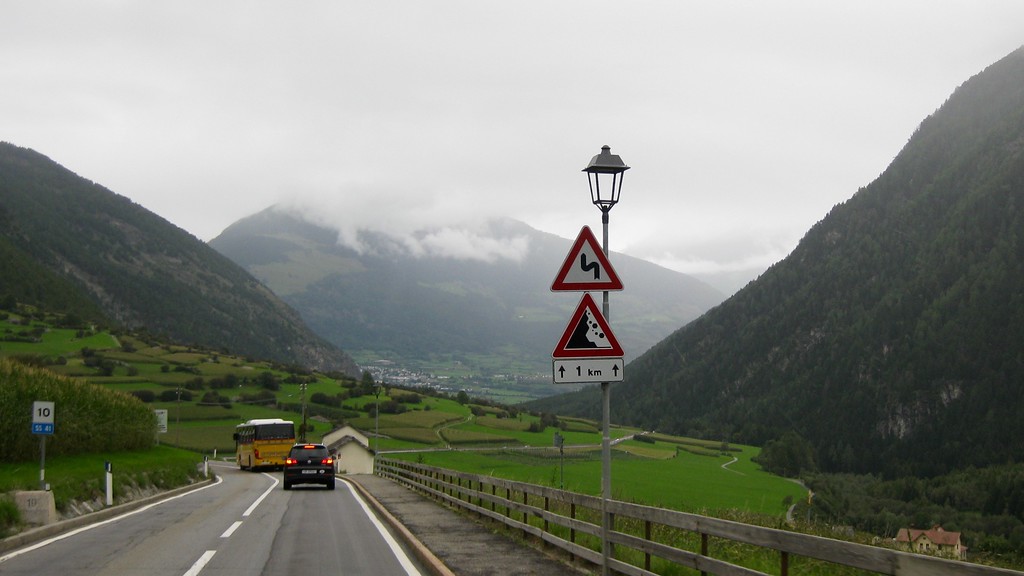 Apple warehouse with containers waiting for the harvest

The language of the signs in the towns that we rode through transitioned from only “German” to “Italian and German”. It was strange that crossing the Italian border did not mean an end to German language in this region. Official town signs would list the town’s name in both Italian and German, with German taking top billing. Advertising in business windows was in German, as well. It was as though we were still in Switzerland! I checked into this later and the area is called “Deutschnofen” and over 97% of the population is German! I had no idea this little region existed.

I had researched a small hotel in the mountain village of Eggen that had a nice looking spa and restaurant (Hotel Oberlehenhof). Today was planned to be our longest day of riding and I wanted to reward us with a relaxing evening after our first day on the road. However, when we finally reached the hotel I was surprised that they did not have any rooms available. I had figured that being the end of September we would be between seasons: no longer summer and not yet ski season. Clearly I was wrong… This is always a chance one takes when traveling: do you plan ahead with reservations and then hope that nothing changes your plans to keep you from making it? Or do you wing it, and hope that you are able to find something when you decide to stop?

The dead-end road to Eggen 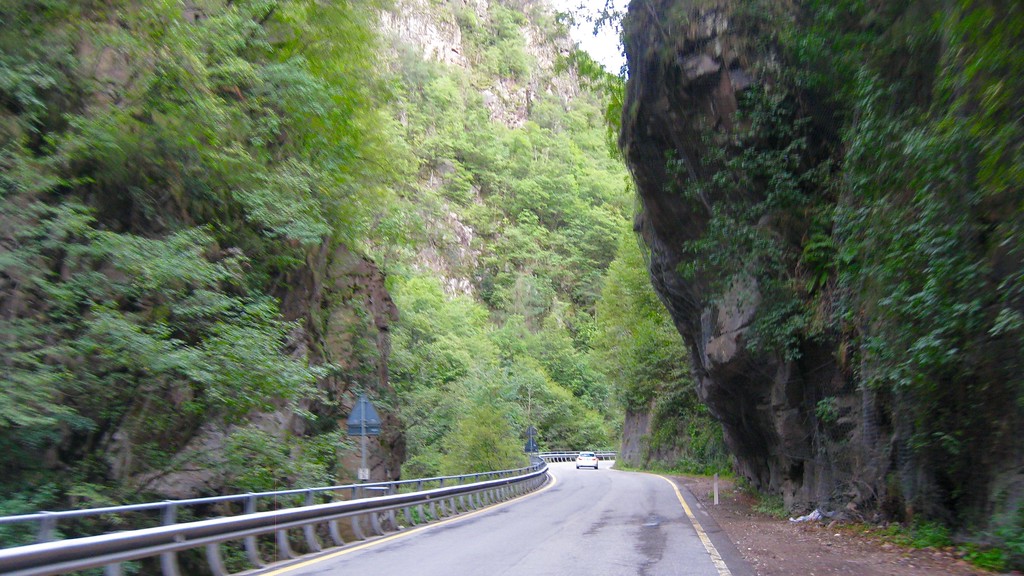 We had passed another hotel, Hotel Latemar, just down the road from this one, so we backtracked and checked: they had a room for us! It was a comfortable hotel, with artwork hung on the walls that turned out to be completed and framed jigsaw puzzles. I thought that this was a clever idea, and the “artwork” looked great. We unloaded the bikes and set out to explore the tiny village (population 900). We had made arrangements to have dinner at our hotel and returned in time for the seven o’clock seating. When we walked into the restaurant we saw a plaque with “#5” carved into it sitting on a table – we had assigned seating! The table was nicely set: the napkin had been folded to look like a tuxedo, complete with a bowtie pasta. Our waiter was very attentive and we soon had worked our way through a delicious three course meal. 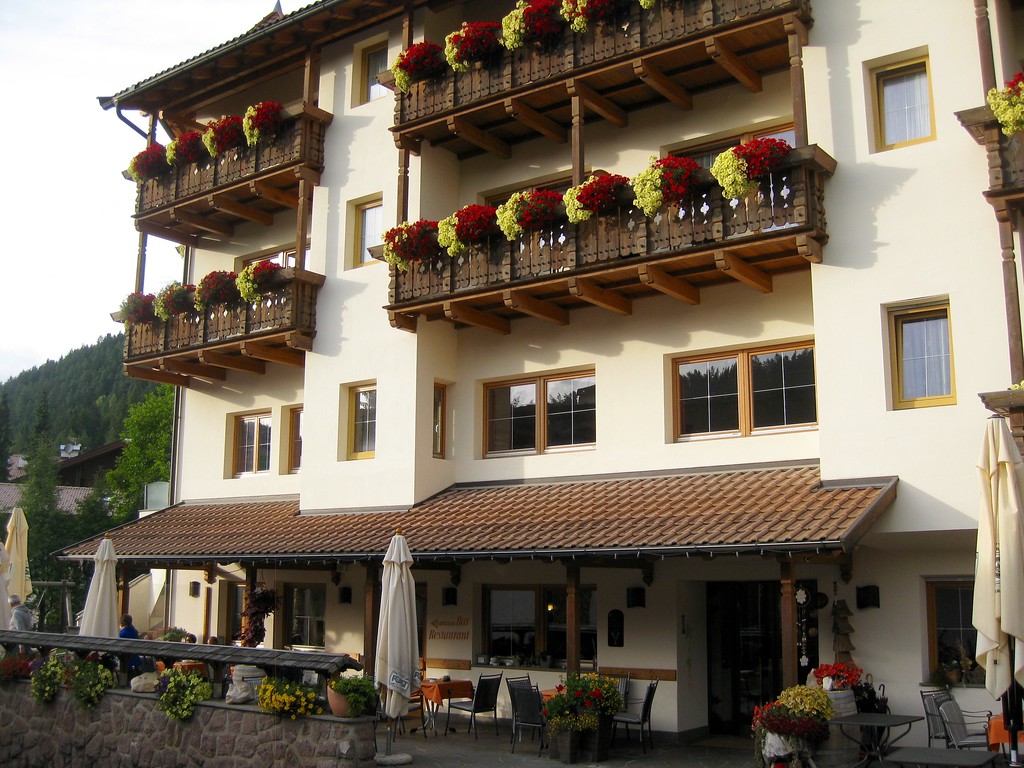 Evening view from our room 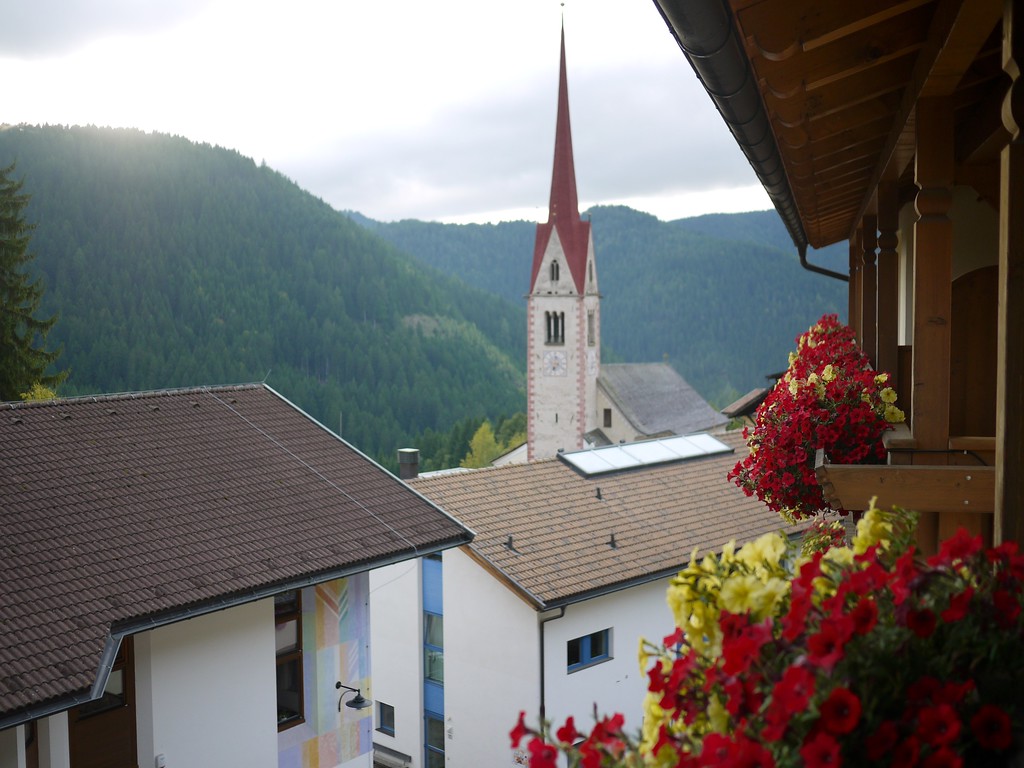 It was late by the time we finished and we retired to our room for the evening. The rain fell outside and I wondered what sort of adventure we would find tomorrow.