It was raining hard when we woke up. The thought of gearing up and riding to the park, only to walk around in the rain, was not an attractive one. I stood at the window and watched the rain come down. It was steady and cold and I was not looking forward to riding in it. My motorcycle pants, despite being marketed specifically to be waterproof, were not waterproof. We had so much rain on this trip that I had it timed perfectly: ten minutes into a rain like this and I would feel the first inkling of moisture “down there”.

We put off leaving our room as long as we could. The plan of the day was originally to visit Plitvicka National Park and see more waterfalls and whatever else was there. The advantage of the rain was that we were unlikely to encounter the crowds that we seen at Krka. Then again, maybe not based on this photo snagged from the internet… But walking around in the rain that morning when we still had to travel somewhere that afternoon was not an attractive idea, either. In the end, we decided that we’d already been to one National Park and that would be sufficient for this trip. It was on to our next destination!

Months ago, two women that we met on a hiking trek in Bhutan messaged us out of the blue and said “Hey! We’re going hiking in the Dolomites in September – come join us!” Things worked out that Dan and I could be there on the proposed dates, so I planned our motorcycle trip around it, with us ending up in Italy on our way home. Today was Monday and we needed to meet our friends by Wednesday evening; we had two days to do whatever we wanted. So we headed north and back into Slovenia, to a reserved room in a pension in Lake Bled.

The rain relented, but the clouds were stuck in the treetops

The rain held off but the roads were wet and this caused problems. Everything I read when planning this trip cautioned me to “beware of Croatian roads when they are wet!” It turns out it is not just Croatian roads, but also Bosnian and Slovenian roads as well. Apparently these governments use limestone in the paving mixture and this creates a soapy surface that does not work well under motorcycle tires. So far we had been fortunate that most of the rain we had come across was in Italy and the little bit we had yesterday was on not very technical roads. But now I had my first run in with these roads and it really shook me up. We were passing through a small settlement and an intersection was on a curve. The front wheel slipped out, followed immediately by the rear wheel. I stood the bike up, swore in my helmet and recovered the bike’s traction. Dan was not very supportive, making a comment about how the roads weren’t that bad and that he hadn’t had any problems. Thanks, Dan.

After that, the road entered a thick evergreen forest with tight, downhill switchbacks. I had lost my mojo and crawled through the corners. Dan grumbled a bit in my ear about how slow I was going so I invited him to go around me. He took the next opportunity and did just that. Not more than five minutes later I heard him exclaim in his own helmet: he had almost gone off the road himself. I felt vindicated and we both took it easy from then on.

Fortunately, the roads opened up after this and there were no more close calls. What we did stumble upon was a castle! I know: there are so many castles near where we live that you’d think that one more wouldn’t have any impact. But the fact that this was the first one we’d seen on the entire trip made it stand out to me and I suggested that we stop. We were riding right passed it, after all.

The castle itself was closed when we were there, even though the sign on the door said that it was a self-tour facility. Oh well – based on what I could see, there wasn’t much inside. The structure had been bombed heavily in WW II and only part of it had since been rebuilt. An illustration on the door gave me an idea of what it looked liked in its previous life.

Suspiciously, I can see the sky through one of the windows! 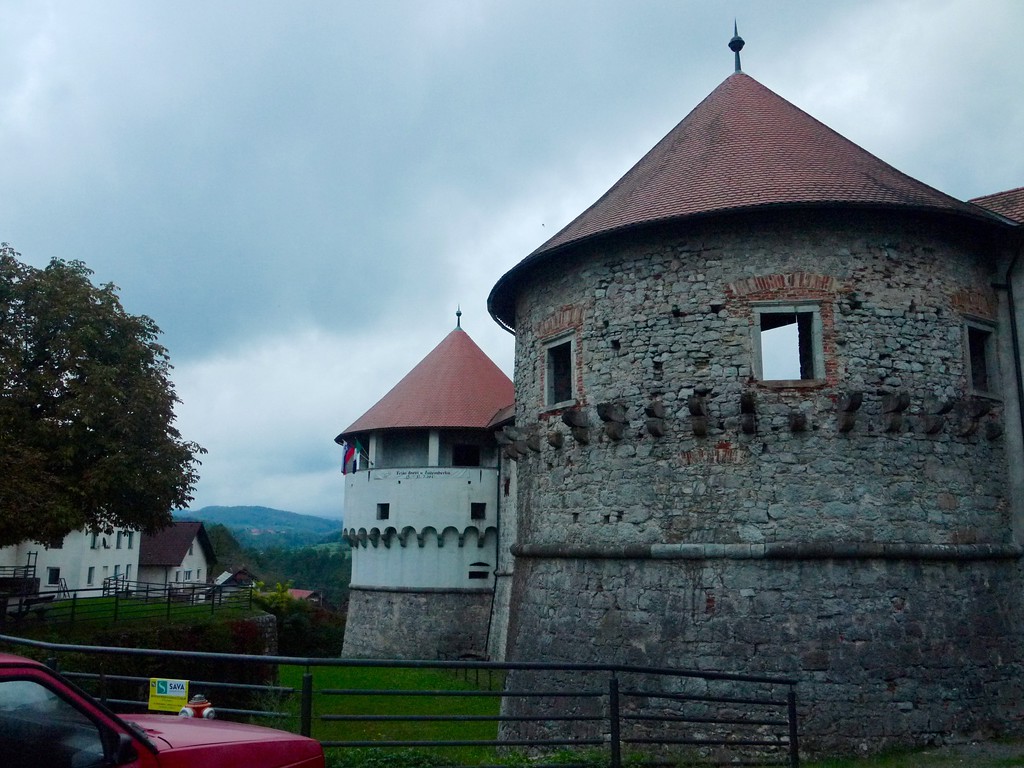 What it must have looked like in grander times

What really impressed me about the castle was its setting: it had a commanding view over the Krka River and the town below. Unfortunately this was not really obvious from where I stood, and the weather was not conducive to further exploration. I went online and found this photo.

An aerial view, compliments of the internet

Our goal today was Lake Bled. I had seen so many pictures of the famous monastery standing on its lone island in the middle of the lake; it would be a shame not to visit it in person. I mean, who could resist something like this?

(stolen from the internet)

We were still quite a ways from our destination, as we had to get through (around?) Ljubljana, Slovenia’s capitol city. I had originally looked into staying in the center of the city, but the idea of spending time in a big city just didn’t sound appealing. I preferred somewhere in the mountains, in a quiet town. So I had reserved a room for the next two nights at Lake Bled, as it is always more relaxing knowing that there is a day off the bike.

Riding through the Slovenian countryside

Dan and I were impressed with Slovenia

I love the clouds in the trees

We had arrived early enough to take a walk through the town and along the lake. It barely resembled the photos I had seen online, since there were heavy clouds obscuring the mountains surrounding the lake, and the lake itself was blurry in the mist. Dan had researched where we should have dinner and that was the direction we headed.

The castle of Lake Bled 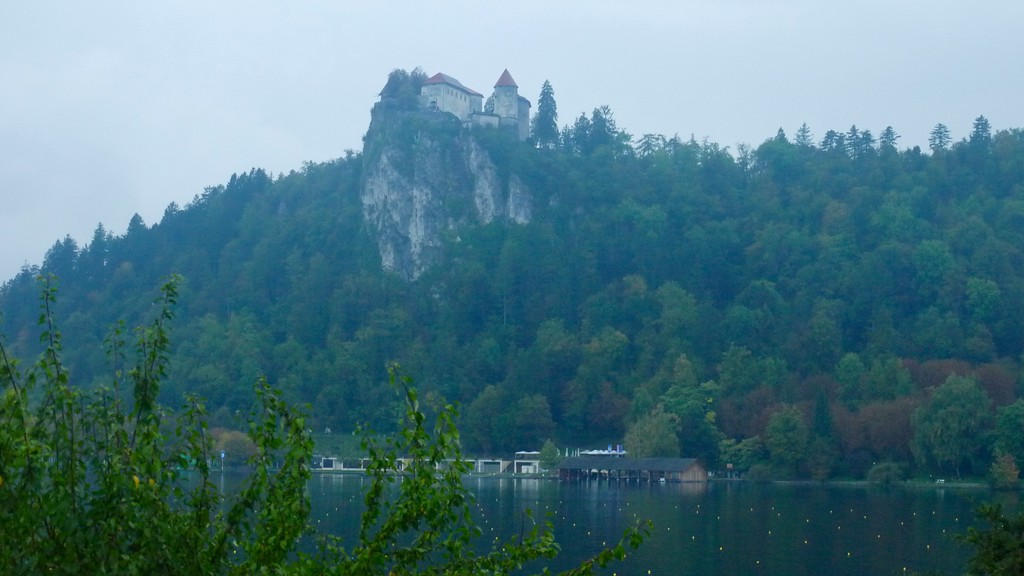 The Church of the Assumption on Bled Island

An empty house – such potential!

The restaurant was called Sova and was located just across from the docks where the row boats plied the waters to Bled Island. It looked small and cozy and perfect for a relaxing dinner.

The menu was not extensive, but so many of the dishes were delightfully described and prepared. I settled on an Angus steak, wrapped in bacon and served with pureed potatoes and fresh vegetables. Dan and I relaxed and enjoyed the view of the lake. I could see the cooks working behind the counter, busy serving up the increasing number of people who came in. We had arrived for an early dinner which was a good thing, as by the time we left, the place was packed.

When our meals came out I was impressed: my steak was thick and seasoned and it looked divine. But when I sliced into it and took my first bite? That’s when a tear of joy came to my eye. This steak was easily the best steak I have ever tasted. Even now when I talk about it, that same feeling comes to me. I know that photos of food does not do it justice, but for me, this picture is worth a thousand taste buds.

A steak to die for

After we had cleaned our plates (Dan was also impressed with his meal) Dan suggested that we have dessert. I was not hungry for dessert but that apparently was not a good enough reason not to order it. The waiter was a delightful fellow who promised me that I would love it and he went off to the kitchen to have our desserts prepared.

The man was correct.

Almost too beautiful to eat 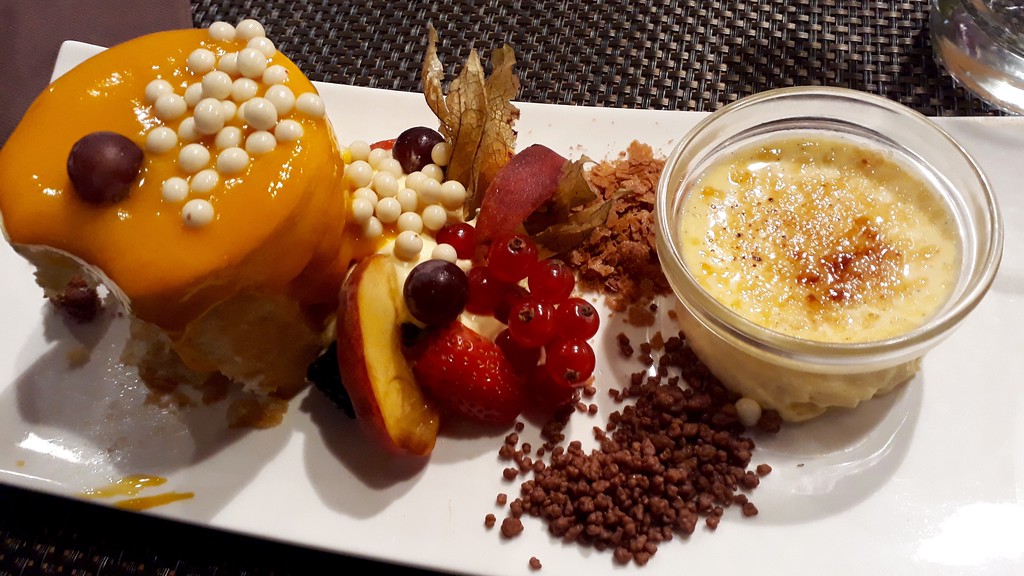 With our bellies full and our tastebuds more than pleased, we left the restaurant for our stroll back to our room. The rain had let up and it was a pleasantly cool evening as we retraced our steps on the lakeside trail. Our room was wonderfully cozy as we snuggled into bed, knowing that there was nothing at all planned for the next day.