Our German hotel room was perfect. It was quiet, tucked away on one of the narrow winding streets that traverse the hillside above the blue sea. Since we had decided to stay two nights in Makarska we could dedicate today to seeing the sights – or doing nothing at all. We actually did a little bit of both, starting with sleeping in.

The hotel’s dog; friendly, but he did bark a bit during the night

Our first order of business was to figure out where we were in relation to the rest of the town and the waterfront. It wasn’t too hard to do: simply walk downhill and we would be sure to find the water. Hopefully the interesting parts of town would be on the way! 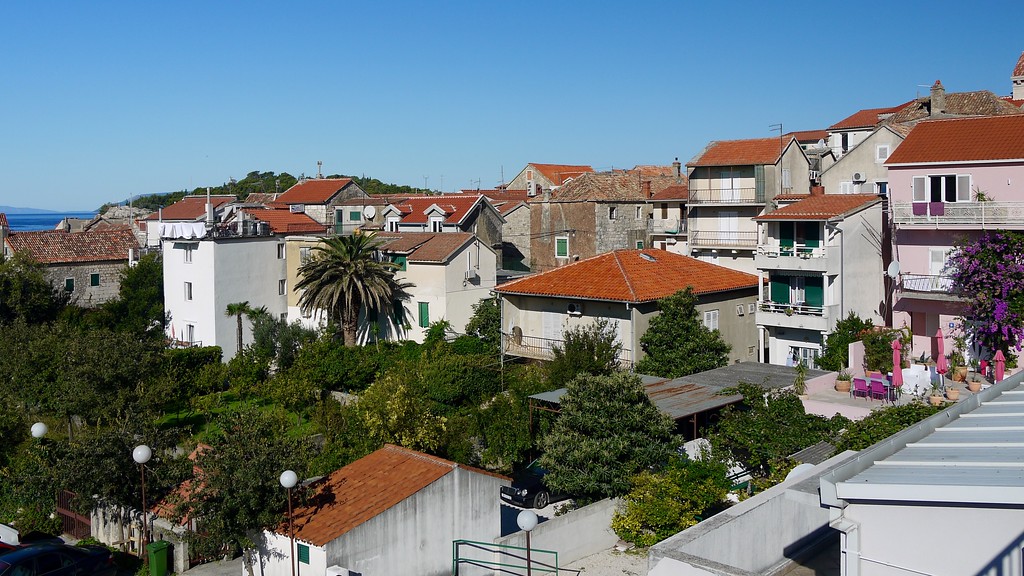 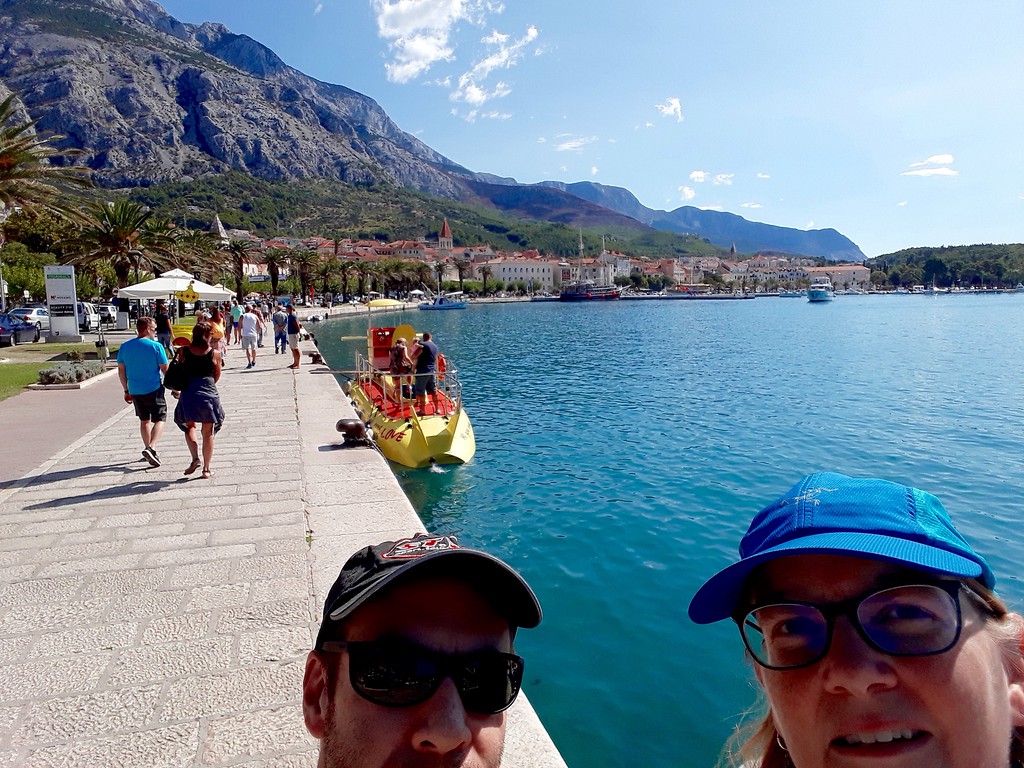 The beaches of Croatia are known for being pebbly and not sandy. Here is Dan’s foot for scale 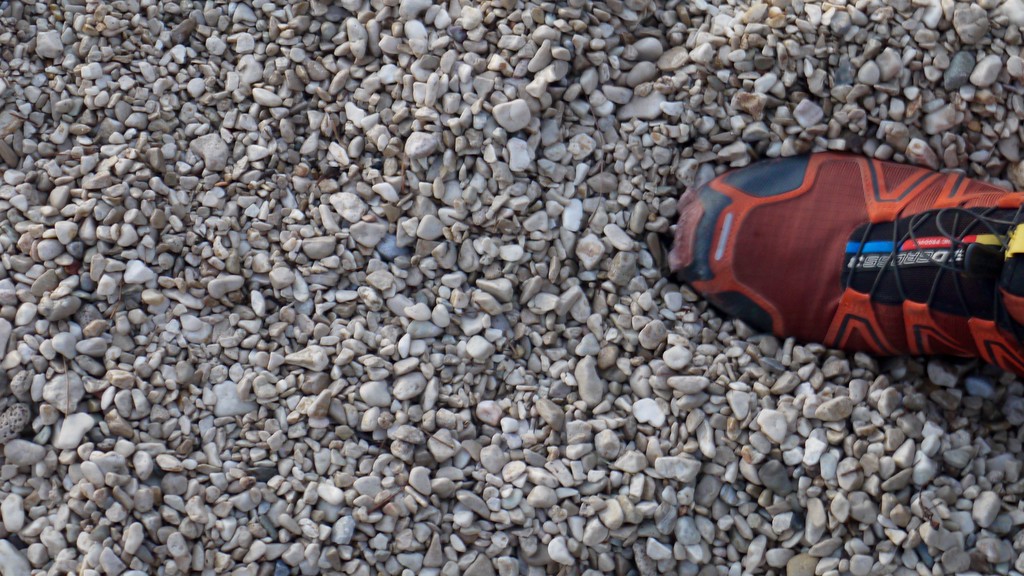 The bay of Makarska is sheltered to the northwest by a tree-covered headland. Once we reached the waterfront we followed the promenade around towards the headland and crossed over the neck of it to the other side where there is another beach.

We had walked quite a way along the north beach where the path was lined by souvenir shops, playgrounds, and restaurants. This side was much more touristy than the main harbor and the number of people already stretching out on the beach showed that it was also more popular.

The beach on the northern side of the headland

Eventually we reached the end of the market stall area and doubled back towards the neck of the headland, this time following the shore out to the lighthouse that poked out from the northern tip. The rocks on the headland were not exactly comfortable for sun bathing, but that didn’t stop people from using them. The city had filled in the spaces between the rocks with concrete, thereby creating flat surfaces to be used by sun bathers. It was an ingenious solution to a problem I hadn’t even considered.

As we neared the lighthouse I saw a fascinating sight: about a dozen cats were lounging in the sun. They appeared to be feral, but were not afraid of me when I approached them. As I looked around I noticed that while the cats may be feral, they were being taken care of. A make-shift shelter had been set up near the rocks, and bowls of food and water were scattered under the bushes. I did a double-take when I saw that one of the cats was heavily pregnant. I would have expected that whomever was taking care of the cats would also participate in a “Trap and Neuter” program. 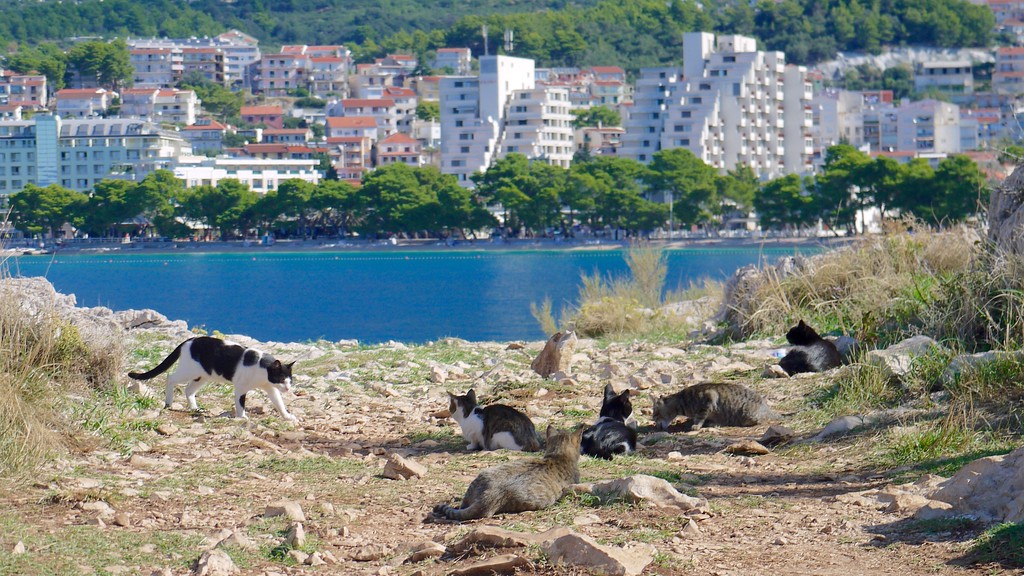 The peculiar rocks of the Croatian coast

Looking back at the northern beach from near the lighthouse 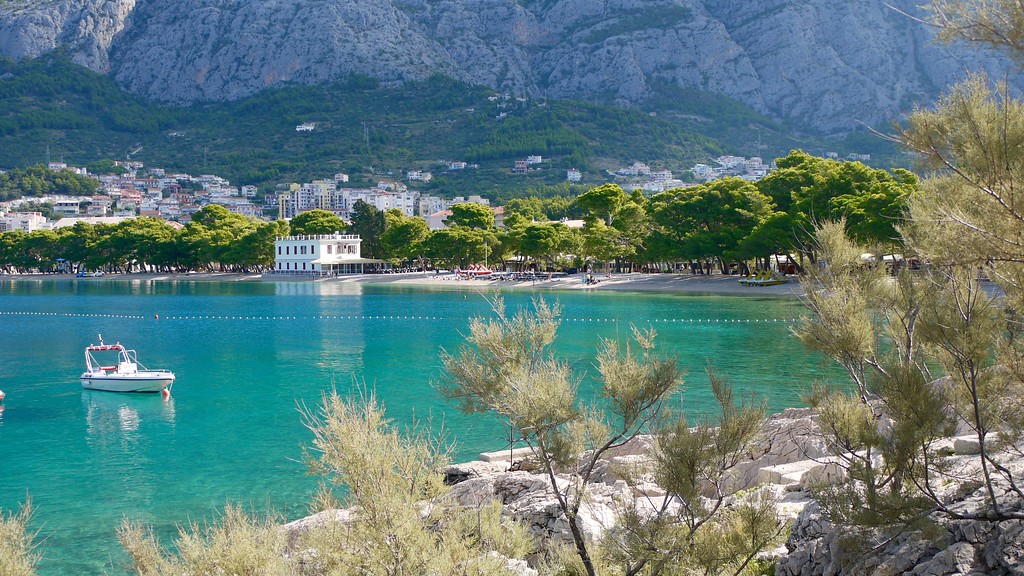 From the lighthouse we continued to follow the coast around the headland, enjoying the trail as it rose to the top of the “Peninsula of St. Peter”, so named for the statue of St Peter the Apostle on the other side. At the high point there was the Church of St Peter, a simple church built in the 15th century on the foundations of an earlier church from the 6th century. In front of the church and dotted round the peninsula are ruins of buildings dating back to Roman, Venetian and prehistoric times. It was a very simple church and did not strike me as being anything special.

After completing our trek around the the headland and returning to the old town center we decided to take a break from our busy day. We stopped by the local grocery store and stocked up on bread, meat, cheeses and a bunch of irresistible snacks, taking our haul back to our hotel room. There, we sat on our balcony and enjoyed a quiet meal, discussing our trip thus far and what we planned for the next couple of days.

Looking back at the town 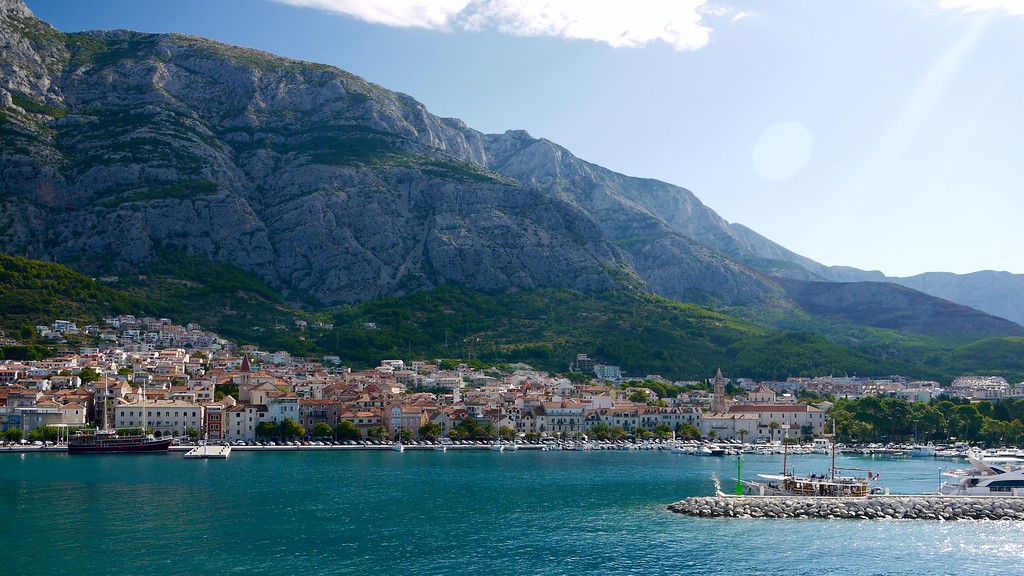 On our way to the store! 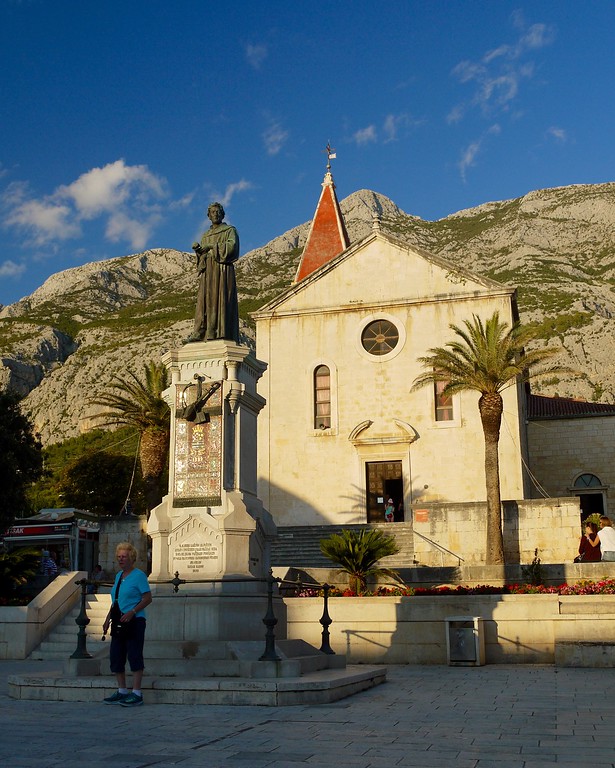 Late that afternoon we went back out into the sunshine. Although I had warned Dan that we’d be on the coast and it would probably be warm, he hadn’t brought any shorts. Silly Dan; he should listen to his wife when she plans amazing motorcycle trips!

When we reached the waterfront we turned left, following the promenade south around the other side of the bay. There was a large park on the south side of town and we figured that it would be a nice, quiet change from the bustling beach front.

Walking out pass the harbor jetty 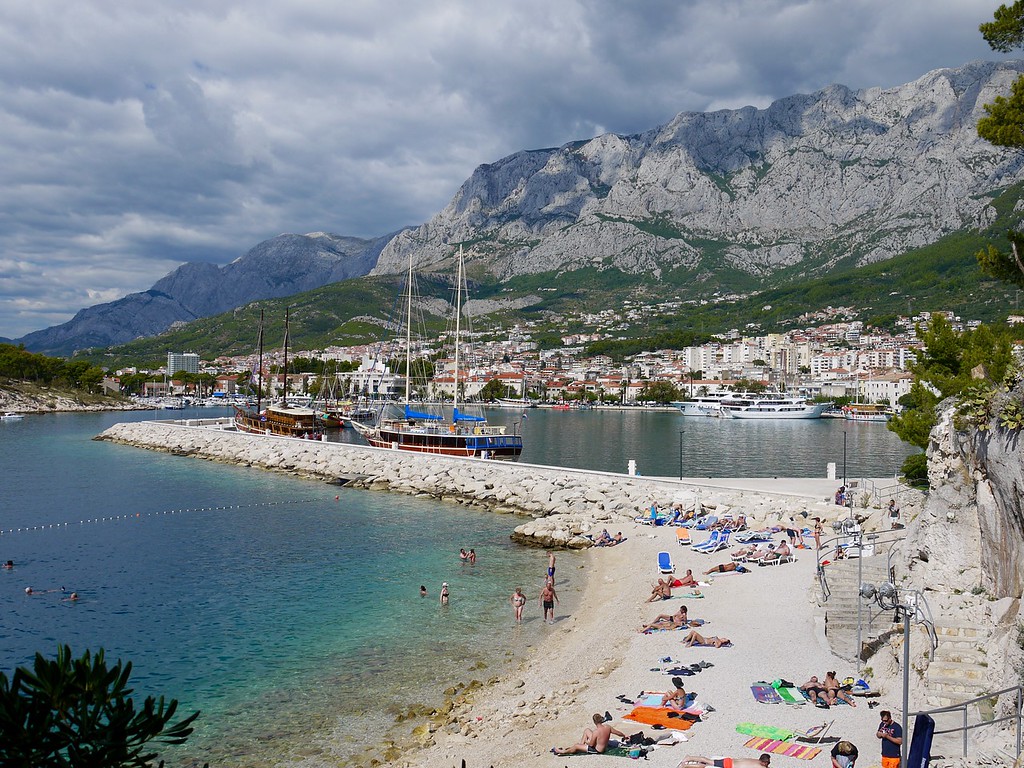 Following the trail through the trees

A spearfisherman, pulling his boat as he hunts 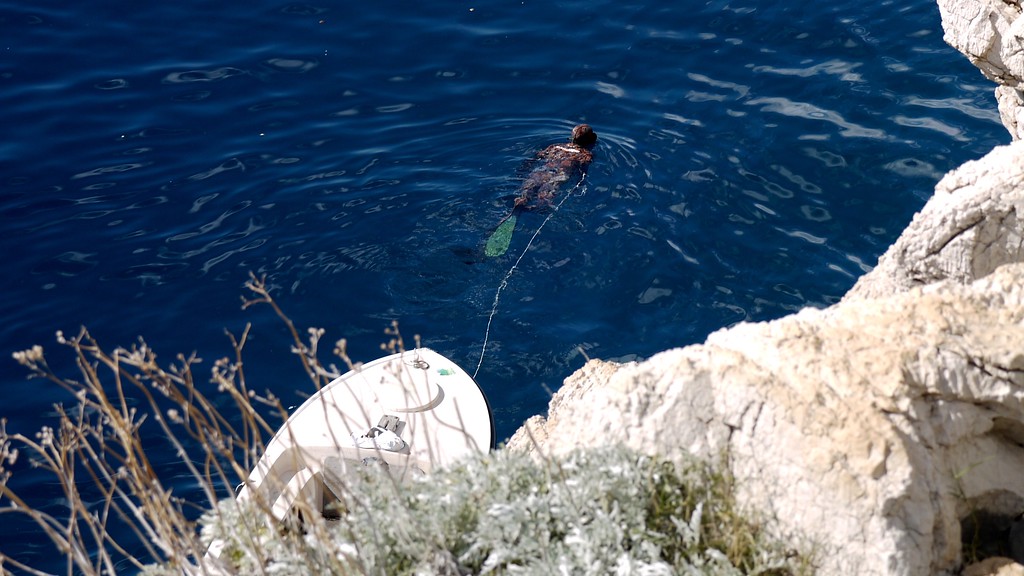 Makarska, snuggling at the base of the Biokovo Mountains 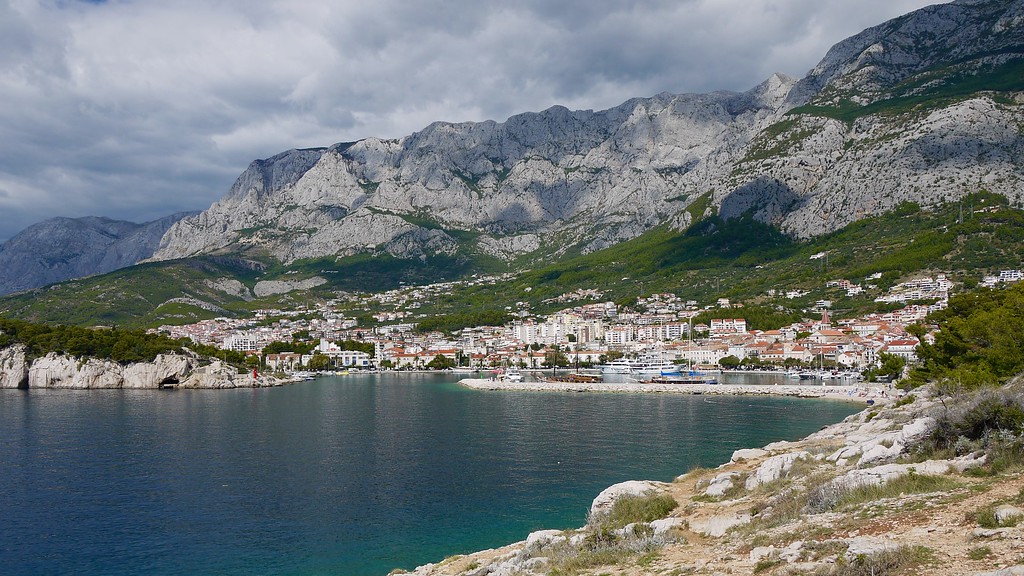 The headland where the lighthouse, St Peter’s statue and church, and a “clowder” of cats live 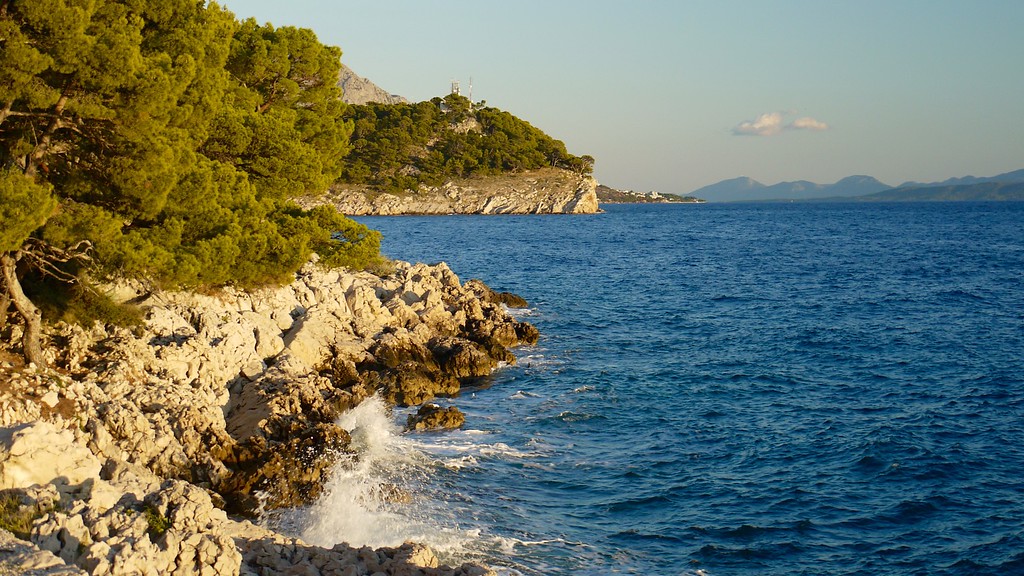 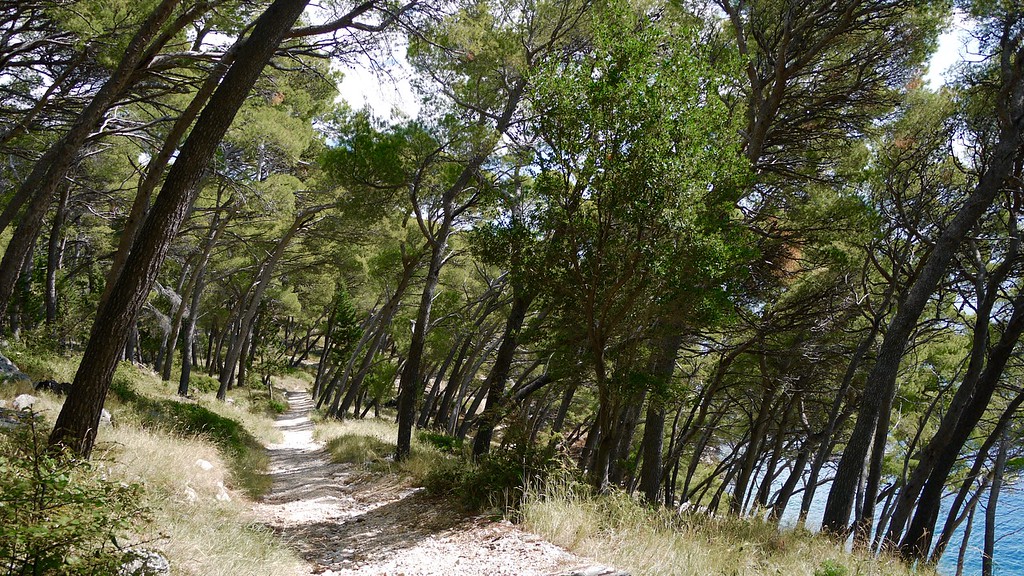 We had walked along the coastal trail for a while before heading back towards the town. I was irritated that I had missed such a beautiful sunset the night before and I did not want that to happen again. I figured that the best view would be from near the lighthouse, with the sun setting behind the islands off the coast. I hurried Dan along the trail, wanting to make sure that I had just the right spot at just the right time. Each time I got to what I had thought would be the ideal spot, I realized that it wasn’t quite what I wanted. I kept dragging Dan further and further along the trail, passed the lighthouse, passed St Peter’s Church, and almost passed St Peter’s statue – but that’s where I ran out of things to pass.

As I settled on my final decision, I was able to give more attention to the music I was hearing. I had heard for the last fifteen minutes or so and thought that someone must be really having a great party at the beach. But even as I walked along the trail, the music was getting louder and louder. Then, as I stood near St Peter awaiting the sun’s exit, I saw the source of the music: a party boat from Split! The music was insanely loud and the people on deck had obviously had a bit to drink on their way down the coast. It is impossible to describe, so watch my short video!

Looking back at Makarska – and the party boat! 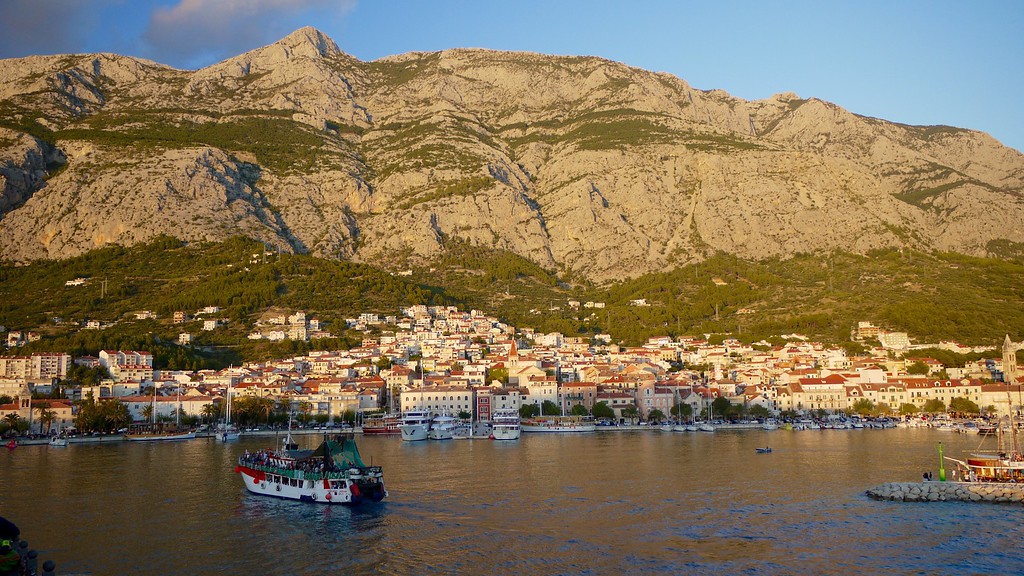 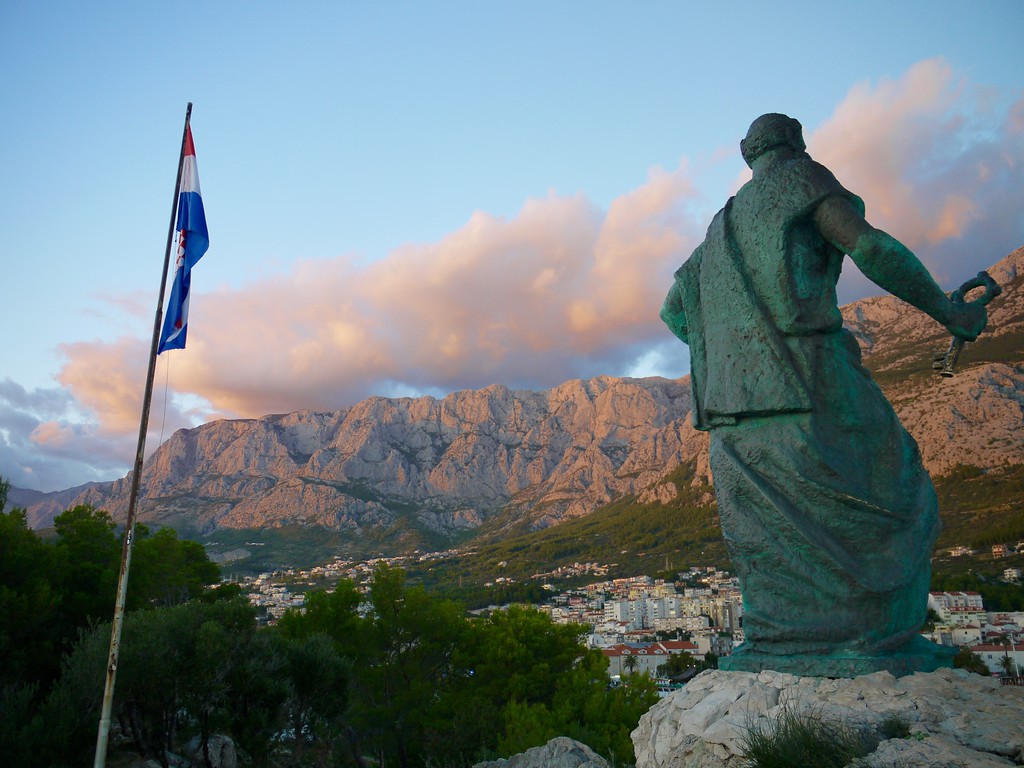 Dan, leaning on a lock-laden railing 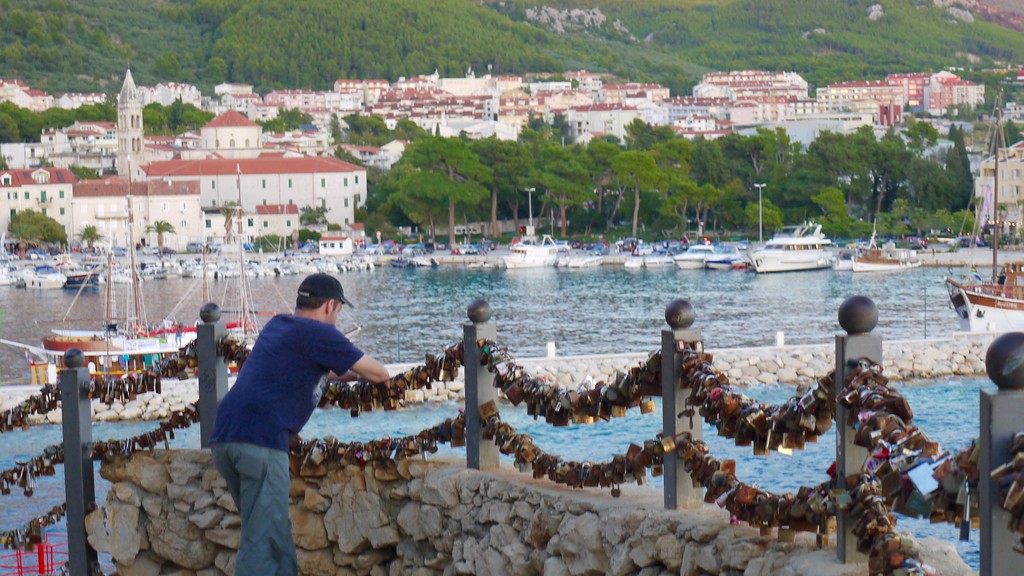 The beaches clear out when the sun goes down