Today’s hike was to be shorter, but more difficult. I had fun the previous day (probably because it was all down hill) so I was looking forward to today’s adventure. Plus it was so much fun to have Petra and Sarah along; it isn’t often that I am actually hiking with someone.

Because Sarah had rented a car, the four of us were able to hop in it and reach a starting point that was further from Cortina. It was only a thirty minute drive, but it allowed us to get to a different mountain for today’s fun.

Another washed out bridge 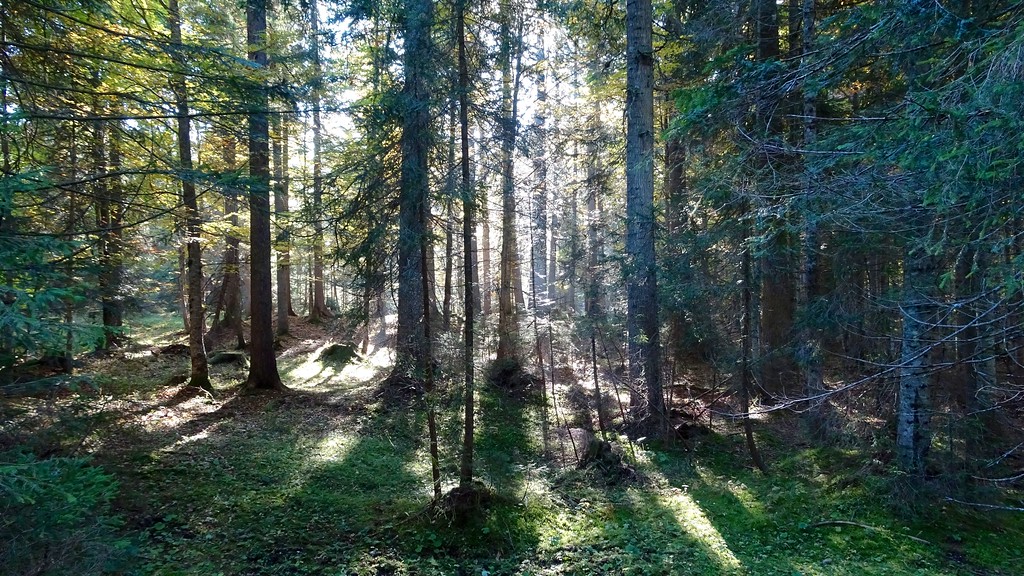 The trail left the road and started uphill

Our goal was somewhere up on that plateau

The decision for this particular trail came from our visit to the Cortina Information center yesterday. One of the posters on the wall had advertised a brilliant blue lake, the kind of blue that only glacial waters can make. It was our goal to reach this lake and see if the poster was telling the truth.

The trail started as a forest service road and then became a nice path through the woods. I was enjoying the fall colors and another morning of perfect hiking conditions when Dan suddenly appeared. The three of us hadn’t seen Dan since we left the forest service road so to find him waiting for us at a bend in the trail was a surprise.

Dan is just around the corner! 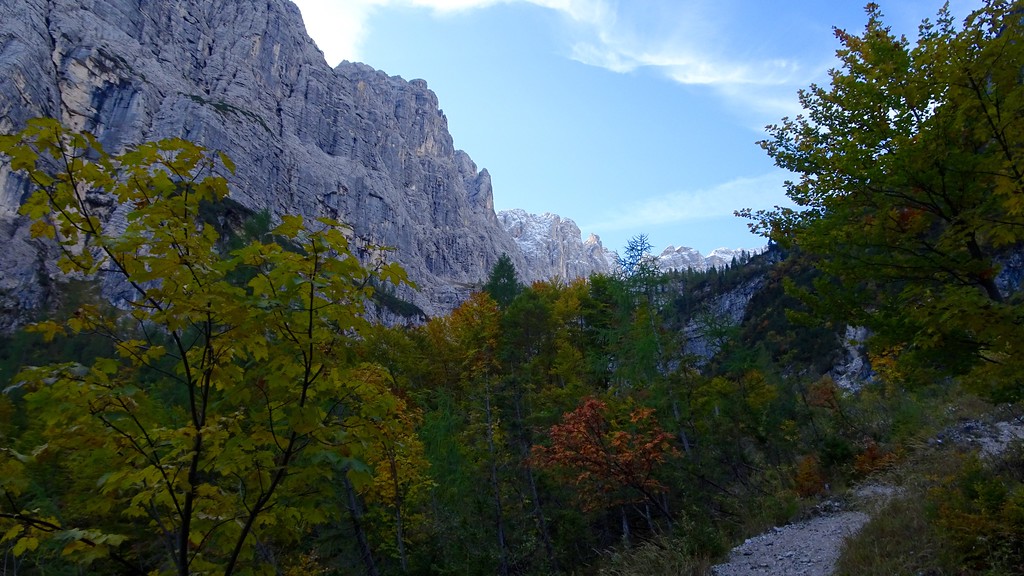 It turns out that he had scouted ahead and the trail conditions worsened. Instead of being the nice forest path we were on now, it became a scramble. It would become a steep, rocky way with tree roots and gravel. It wasn’t difficult to go up it, but I did wonder what it would be like to come back down. Last night, during the planning phase, it was discovered that Sarah does not like heights. This is why there would be no via ferrate on this trip (not that she wasn’t generous and suggest that we go without her). When Dan saw the steepness of the trail, he wanted to make sure that everyone was comfortable with it. We all agreed that we were up to the challenge and our hike resumed. Dan disappeared again almost immediately while Petra, Sarah and I continued to hike together. Or at least within sight of each other.

Looking down at Petra 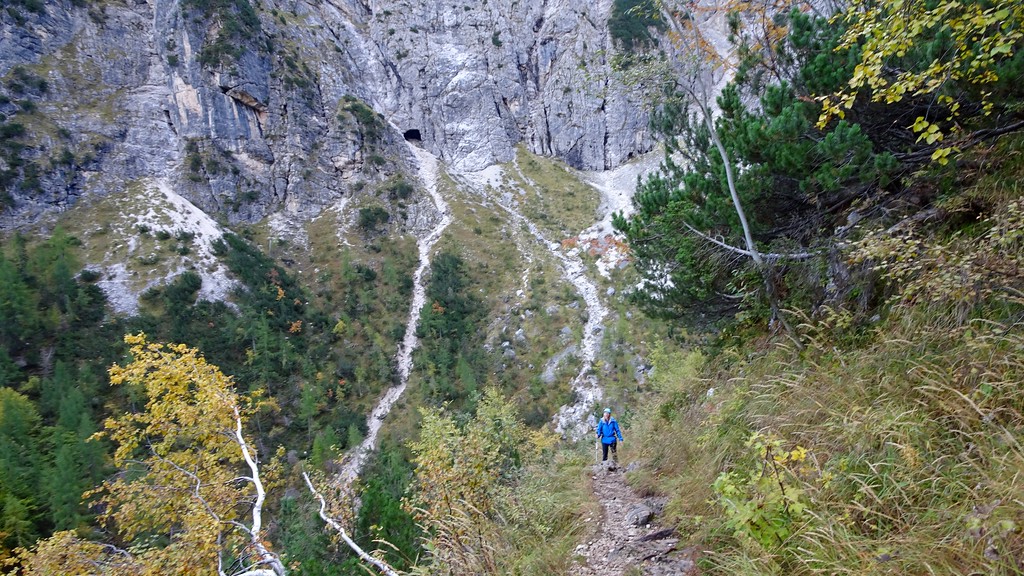 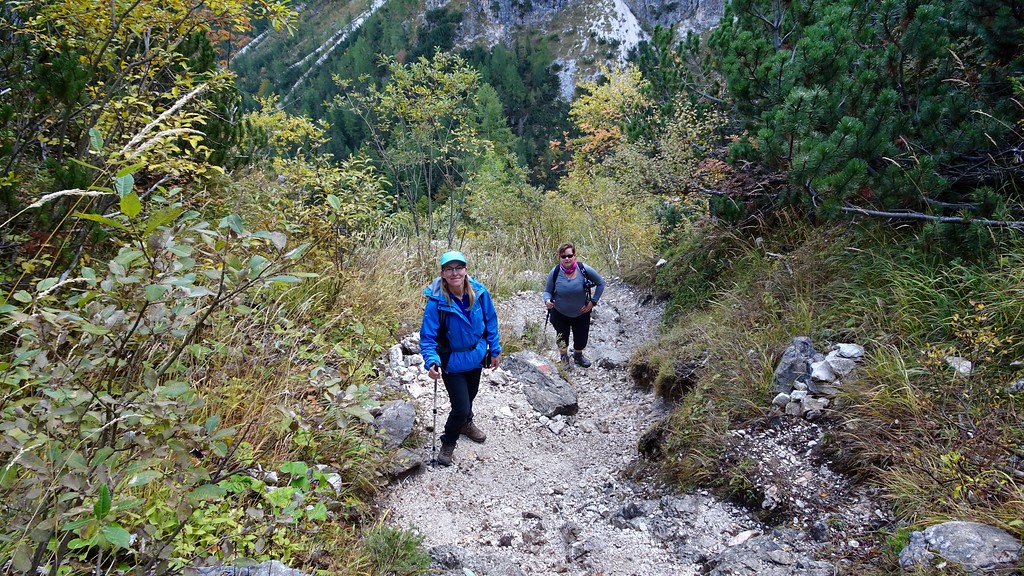 That’s me up ahead – with an emphasis on the “up” 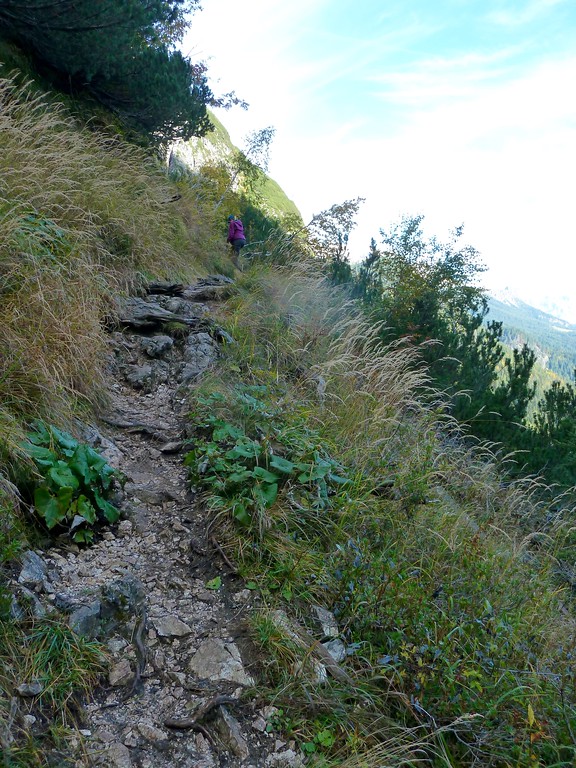 Once we had reached the plateau we had seen earlier, the trail levelled out a bit and went back into the forest. It was getting warmer and I was really hoping that our destination wasn’t around too many more bends in the trail.

Up on the plateau 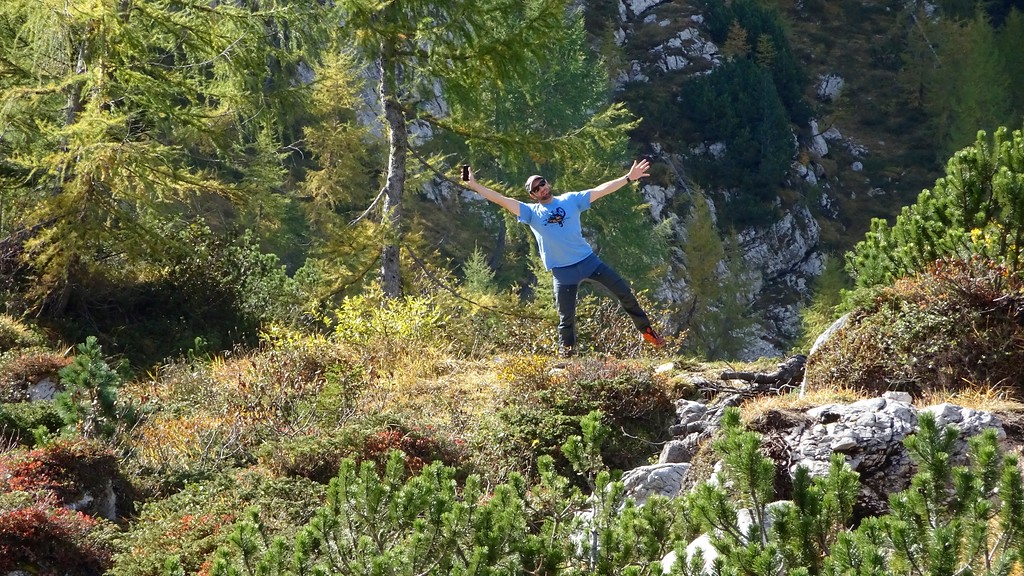 It really is a blue lake

The lake was amazing. A couple of other trails intersected here so there were a lot more hikers milling around. As we found a spot for lunch, more and more people appeared from the trails around us. It was a really beautiful setting and I could not stop looking around and admiring it. It was definitely worth the hike up, and the poster in the Information office was spot on. 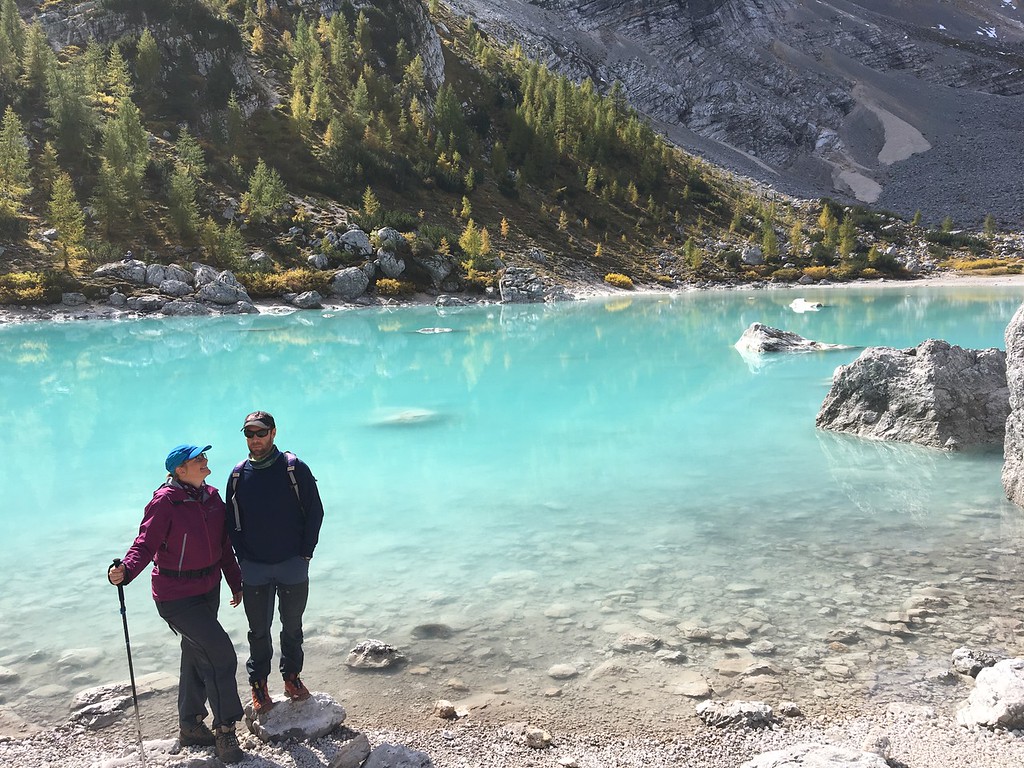 Lunch on the lake 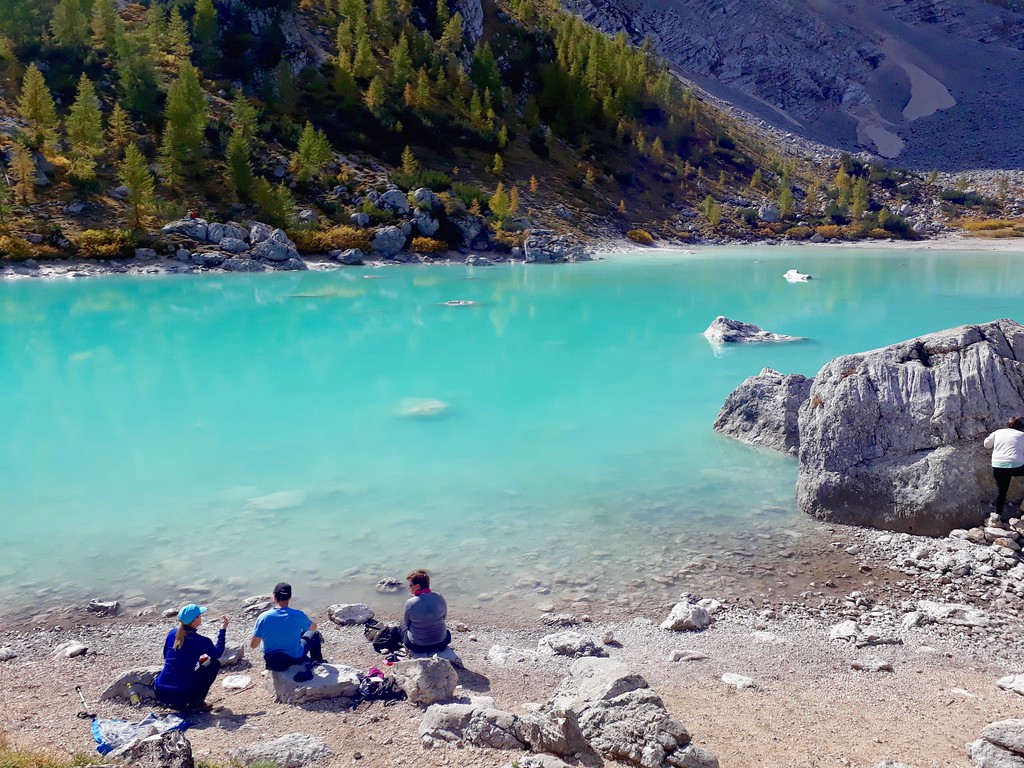 Now it was time to go back down. I was curious just how difficult it would be, considering how steep it was coming up. But most of all, I was a little apprehensive about the gravel sections, as those tend to be slippery like marbles. Fortunately, it went a lot easier than I expected, although I did find myself hiking alone for most of it. Dan had taken off ahead of us (he was practicing his downhill trail race techniques, he told me later) and I was generally faster than Sarah and Petra on the downhill.

Odd perspective, but this is going down 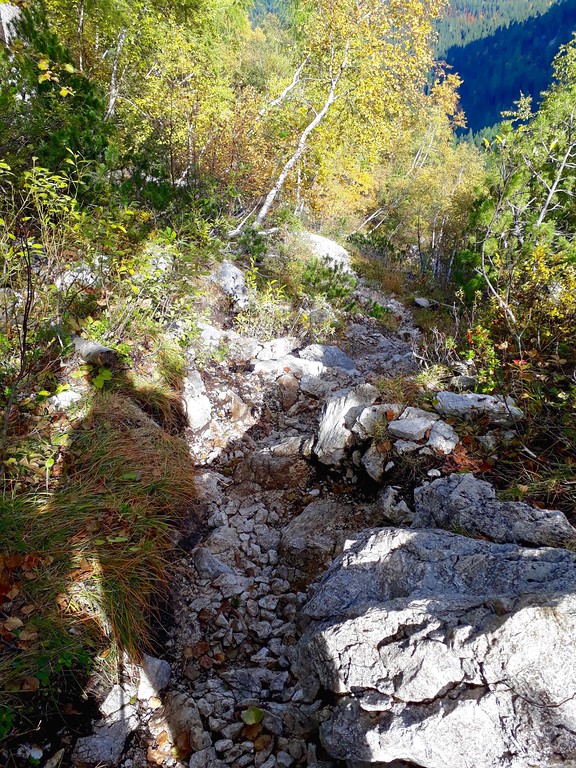 Petra took a picture of me down a set of switchbacks 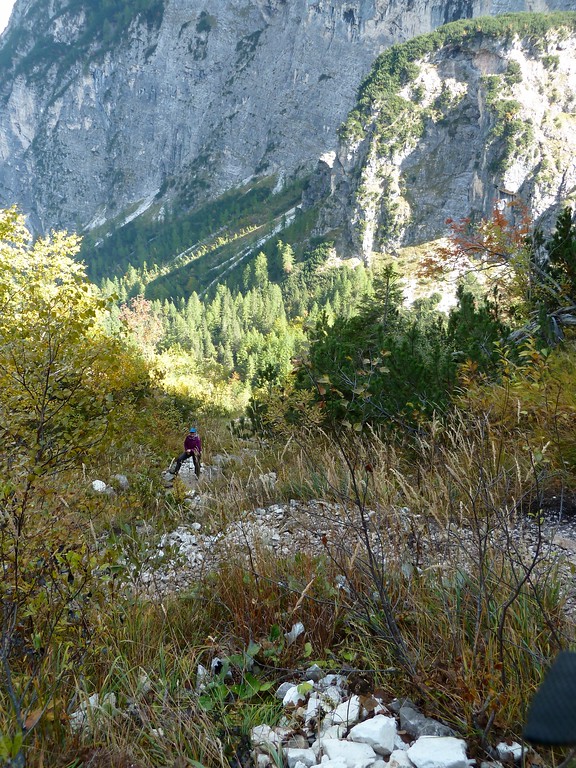 Eventually I stopped and waited for Sarah and Petra and the three of us continued on the trail. We found Dan waiting for us at the washed out bridge and then the four of us walked together to where we had left the car. It was a satisfying drink that we had at Restaurant Cristallo across the road before the drive back to Cortina.

Downstream view from the washed out bridge 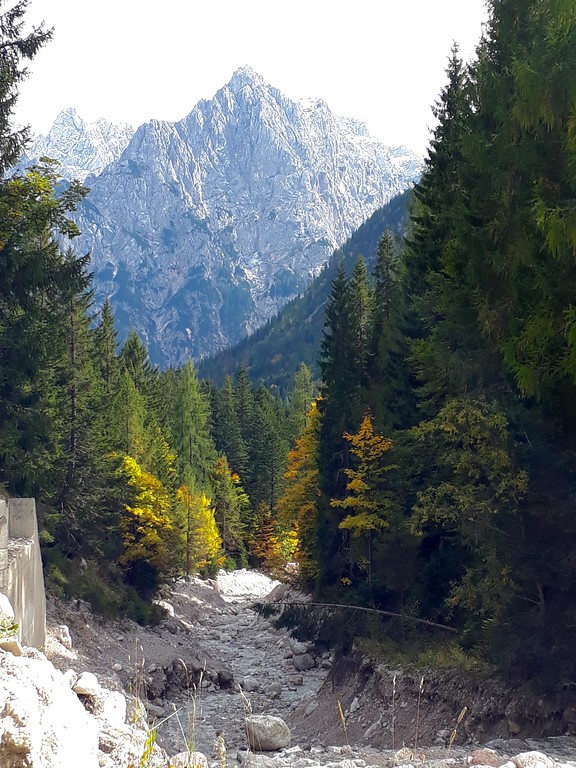 The view from the restaurant, looking towards our hike

That night we celebrated by returning to the restaurant near our apartment, Restaurant Da Beppe Sello. It was where we went the first night in Cortina and it was good enough to go back. Plus, it was really close to where we were staying.

Walking through the neighborhood 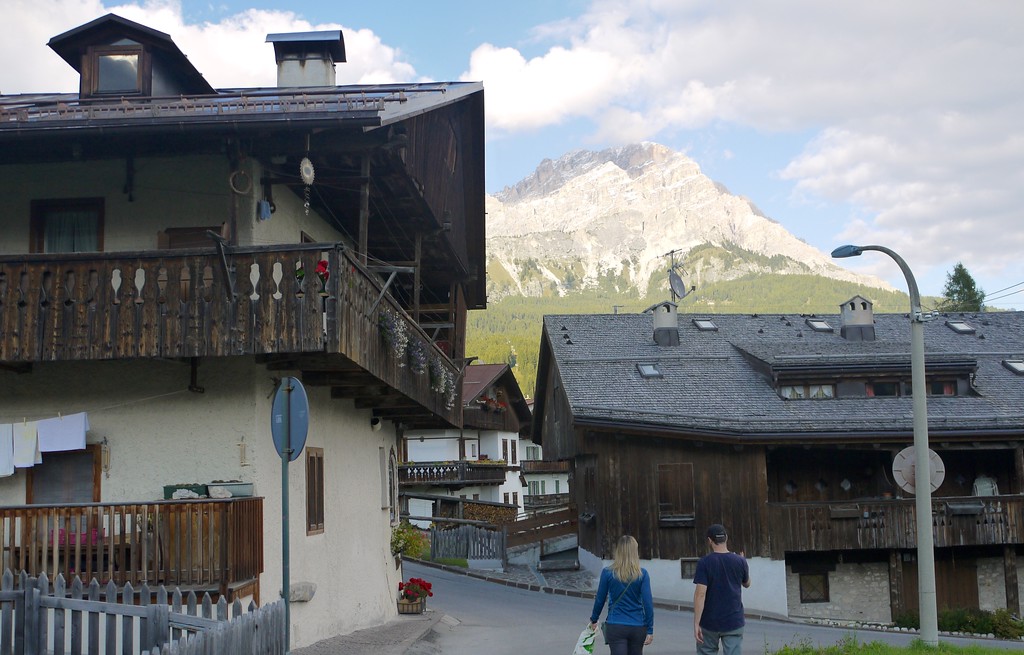 The window of glorious weather was coming to an end and we weren’t sure what we would be able to enjoy the next day. If the clouds continued to move in then any view from the mountain tops would be obscured. But we still had another full day together – we planned our options with bad weather contingencies. We’d just have to wait to see what the morning brought us.