The previous evening we had poured over the local trail maps and internet sites, trying to determine the optimal hike to start with. I was fortunate that Sarah and Petra were more of “my speed” when it came to hiking. The three of us were often together in Bhutan, bringing up the rear of the group. I usually get anxious when I know that I’ll be hiking with Dan, as he is a much stronger and faster hiker than I am, but knowing that I would have the company of friends to hike with this time was reassuring.

Oh, and contacts: My cat sitter had found a pair of contacts, but they were Dan’s, not mine. She sent them anyway, as I wasn’t able to answer her before the post office cutoff time. So while I wouldn’t have contacts for the rest of the trip, at least Dan would have (another) spare set. Except that they never arrived. I had asked our host if a package had arrived with my name on it. I had emailed him previously, to let him know to expect it, but he said that no, nothing had shown up yet. I thought that odd, but maybe tomorrow would be the day. By the time we left on Sunday, there was no sign of the contacts anywhere.

Our first plan today, to take the Tofana Cablecar, was an instant failure. We had walked over to the lower lift building only to find that it was still closed: ski season wouldn’t start for a few more weeks. Undaunted, we walked into the center of Cortina and found the Information office to inquire further. The staff there was very helpful and gave us some more trail maps and suggested that we take the Faloria cable car up and walk down the Panorama Trail. We had a (new) plan!

No cable car from here today! 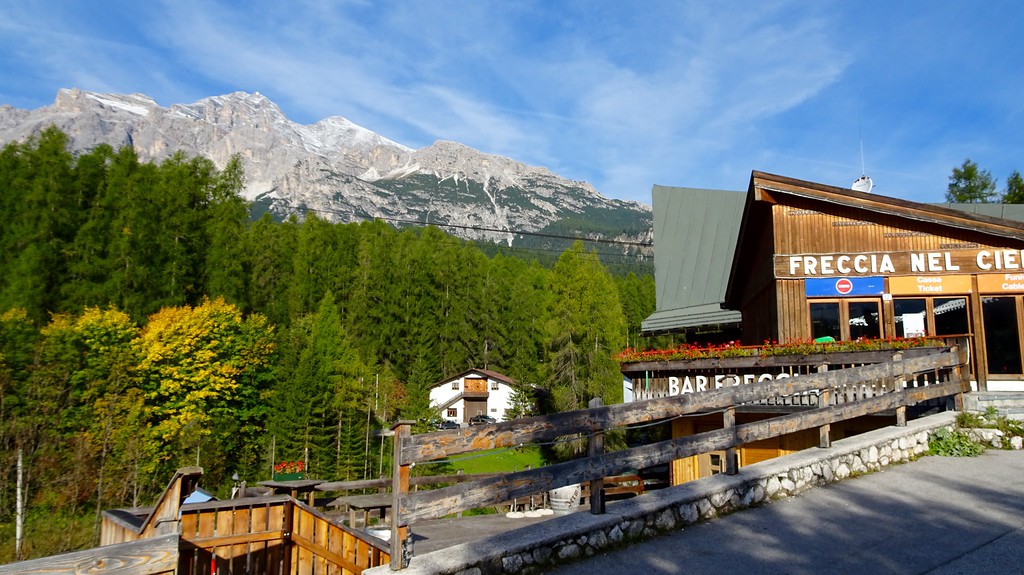 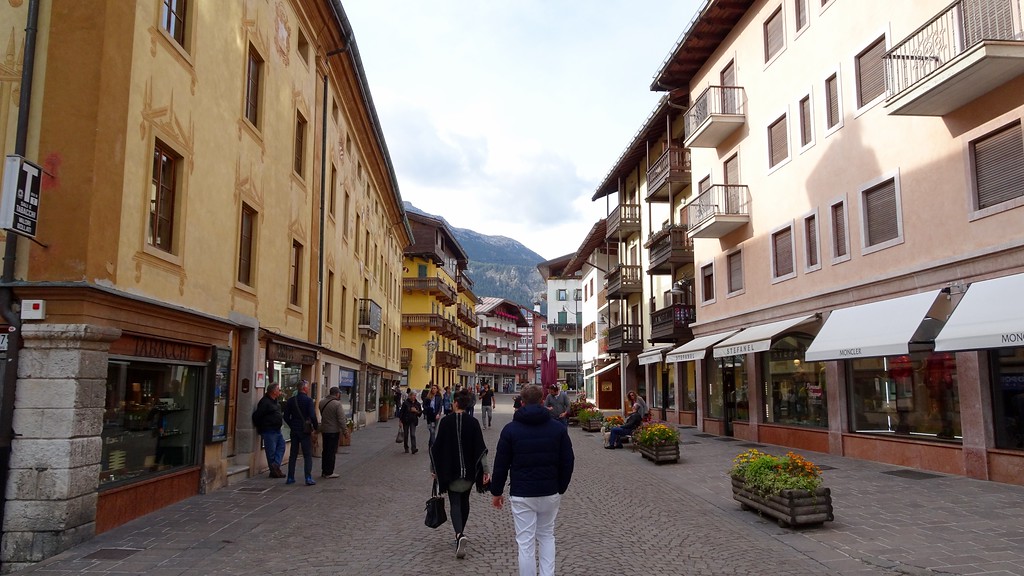 The Faloria cable car was on the other side of town, but Cortina is a small town and we were there quickly. Once in the cable car it was a smooth ride to the top and then we were faced with our choice of hiking trails. We saw the sign for the Panorama trail that had been suggested but for whatever reason, we chose a different path. Adventure!

Looking down at Cortina from the Faloria cable car

The day was perfect for hiking: it wasn’t too hot and the sun was warming up the morning sky. Actually, I was pretty happy to be in the trees, as the direct sunshine felt a little too warm. But hey, I wasn’t complaining: it sure beat hiking in the rain!

Every bend in the trail brought a different view of the scenery around us, and as the time passed, the shadows changed the rock faces around us. There were few other people on the trail and we enjoyed casual conversations as we made our way. Our group flowed easily: sometimes the four of us all shared in the same topic whereas sometimes we’d split into two pairs, the members of each pair changing frequently and freely as we walked.

Looking at Cortina, and the Faloria cable car (barely visible near the mountain’s side) 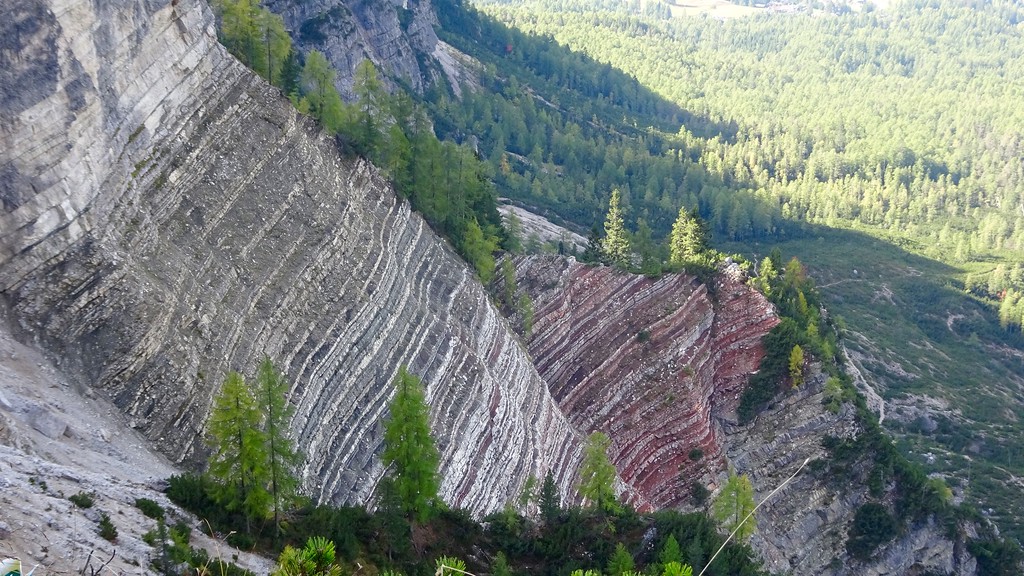 I was glad we were descending

We reached a gravel road that in turn led us to a paved road. It was the base of a chairlift that was not yet in operation. But the restaurant at the bottom was open, Restaurant Rio Gere, and we all agreed that it was lunch time. However, instead of eating in the restaurant, we sat at a picnic table under a tree and opened up the bagged lunches that each of us had packed. During our meal we discussed our next steps. We still had some elevation to descend before we reached Cortina again. The question was: what route should we take to get the rest of the way back? The trail maps came out once more and we traced out our options. Our choice was made; we packed up our stuff, cleaned up the table and hit the trail.

Lush grass under the trees 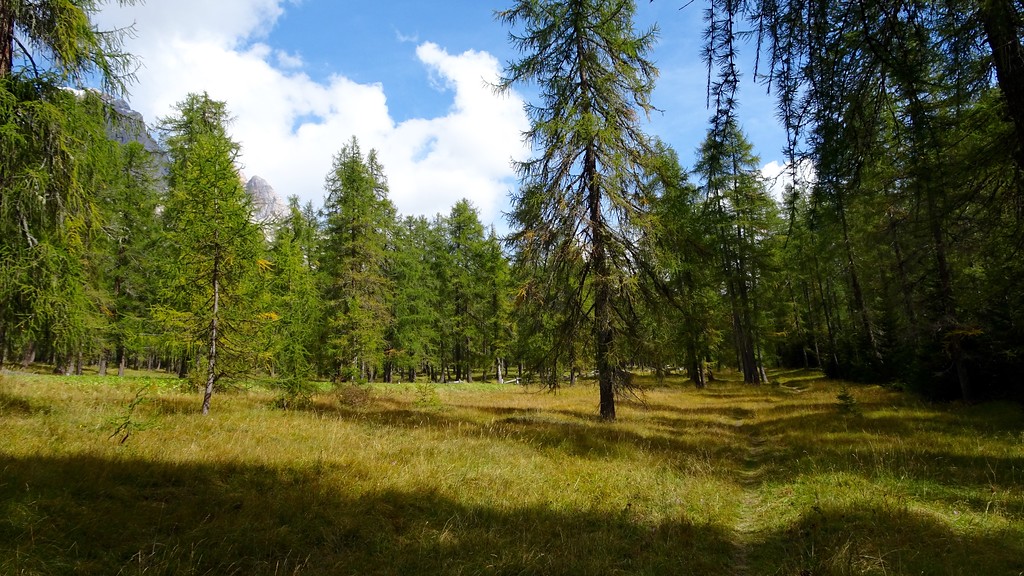 Evidence of recent storms was still quite…evident. Apparently a “water bomb” hit the region in the beginning of August and the area was still cleaning up some of the mess. The town itself hadn’t shown any damage, but the roads and bridges in the surrounding mountains still bore the scars. We had to do a little bit of navigation when crossing a stream bed, as the trail markings had been washed clean away – as well as the bridge that used to span it. 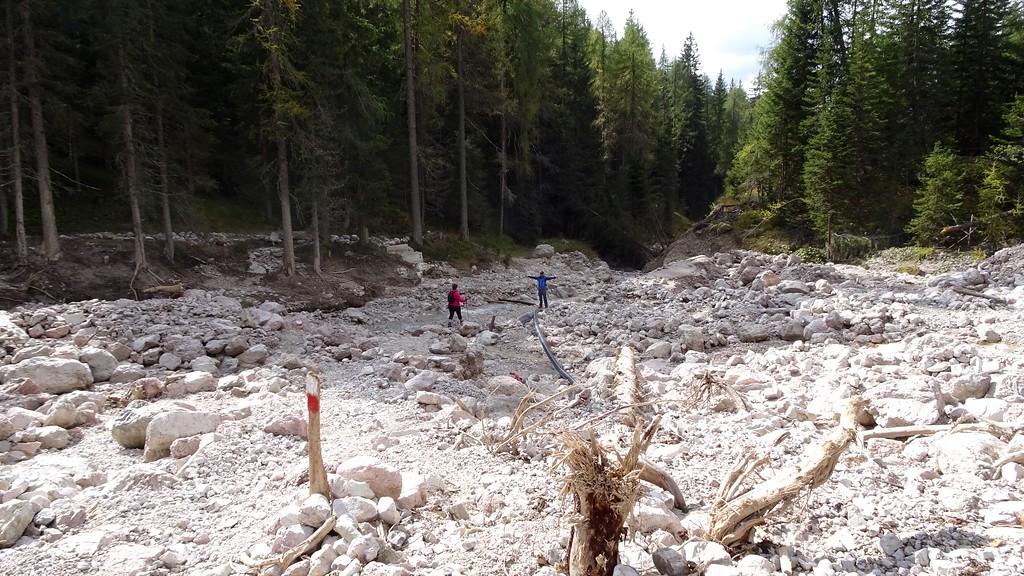 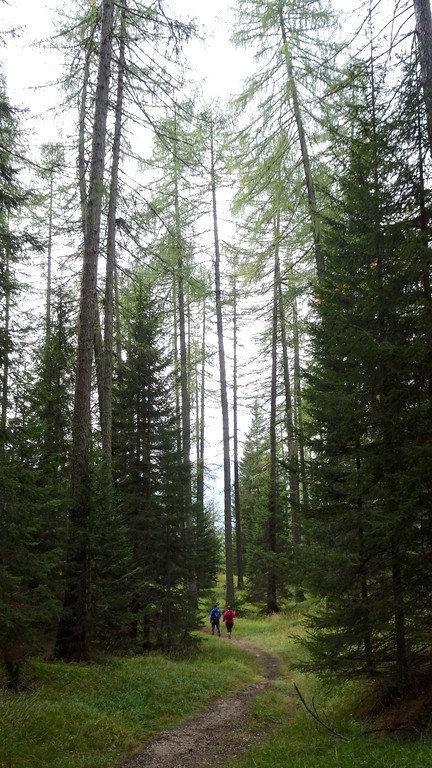 Our route today was a downward spiral. We had taken the cable car to the top of the peak, but now we had circled around the ridge and through the forests, and then across the mountain face below the ridge. Eventually, we planned to catch the cable car at its midway point for the remainder of the return to Cortina.

Crossing the mountain face, below the ridge we had just traversed

We had started up there! 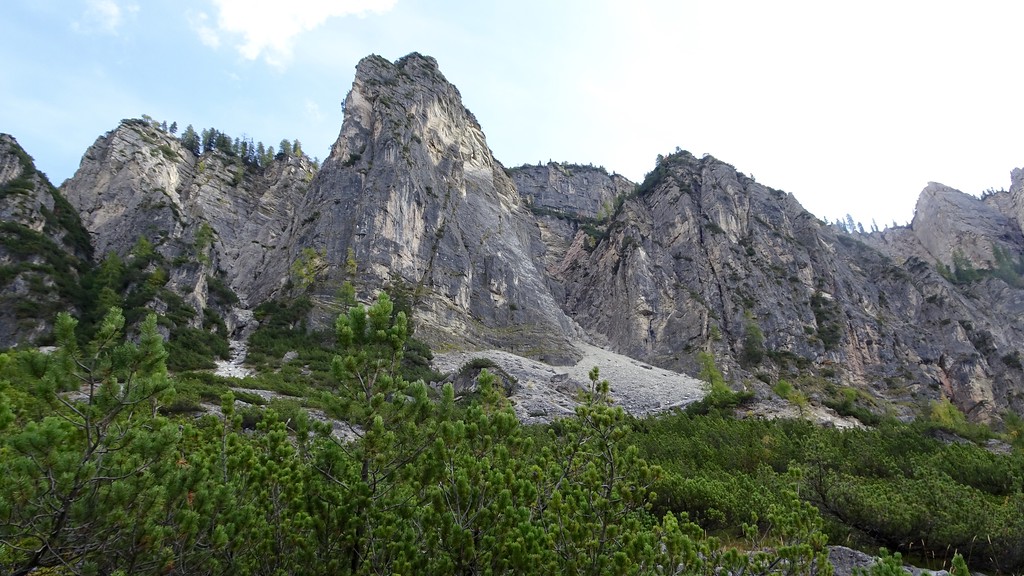 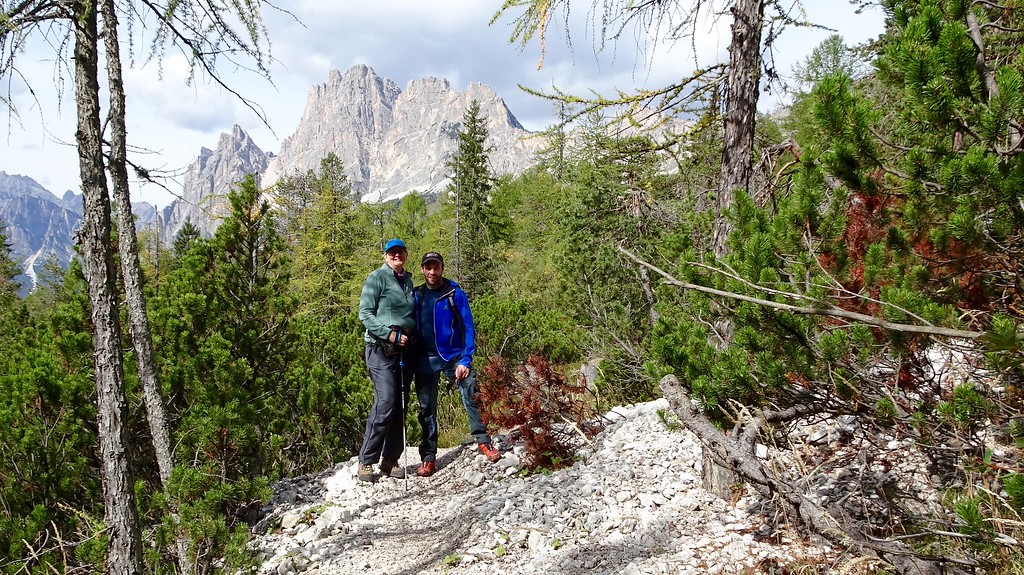 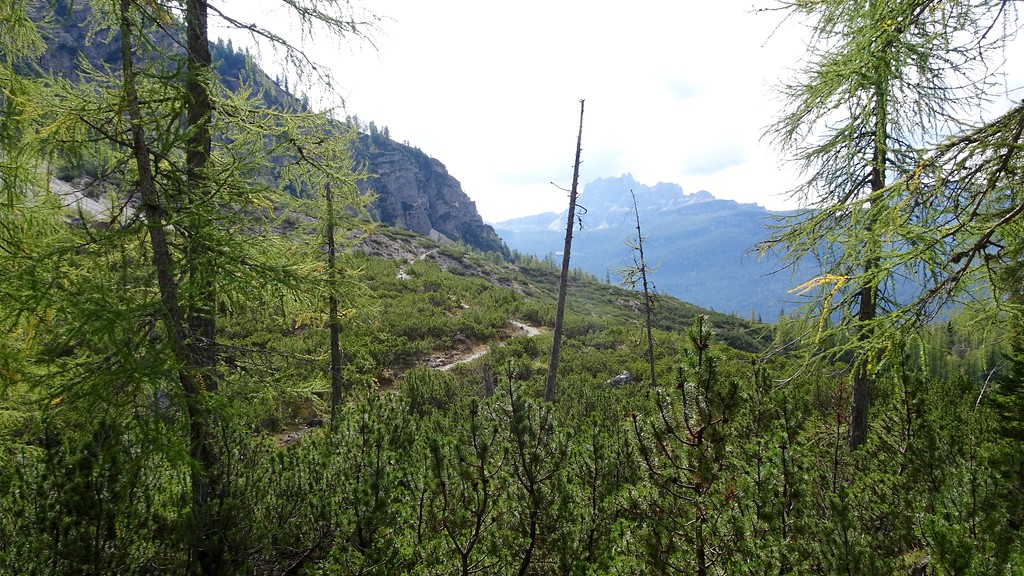 Just over the ridge was the cable car’s midway point 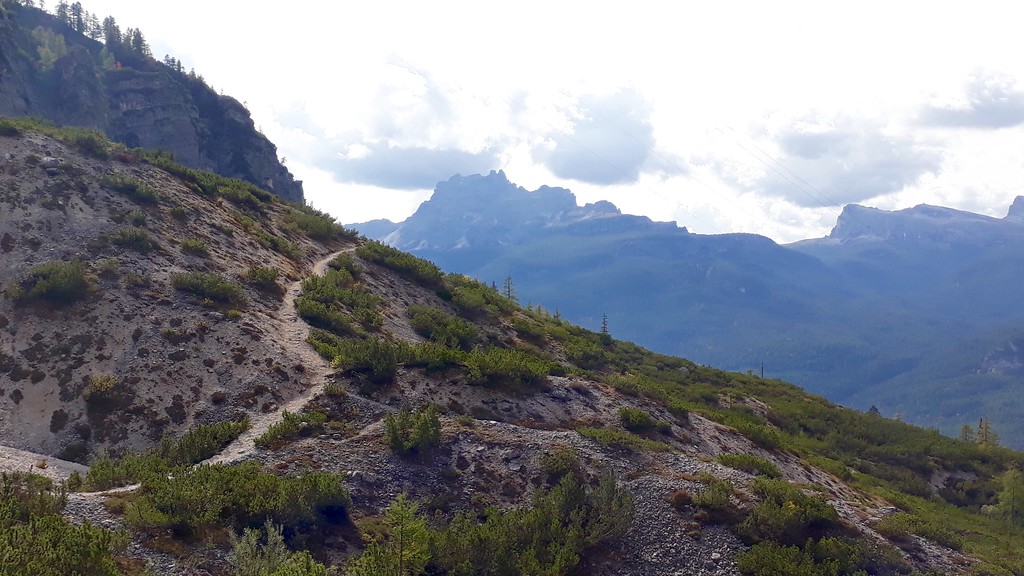 We arrived back at our apartment mid afternoon and kicked back with some local beverages on the garage rooftop garden area. It was a beautiful afternoon and we enjoyed the setting, surrounded by the towering mountains and singing birds.

Not a bad view from the picnic table 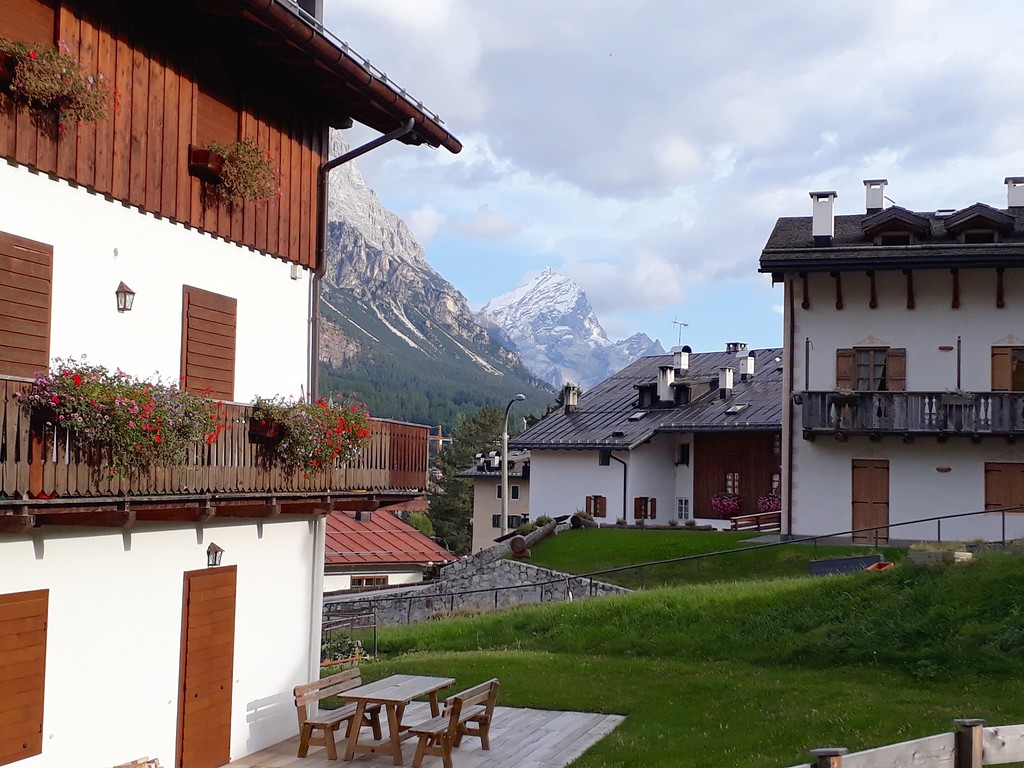 We eventually motivated ourselves to walk back into town and find some dinner. The Il Ponte Pizzeria had caught our attention and we made our way there. It was a busy place with bustling staff. Our pizzas were huge and tasty and none of us left dissatisfied that night.

It was back to our apartment to plan another day of hiking. Today had been a success and we now had a better idea of what the trail legends meant when they indicated a trail’s difficulty. The Hobbit Hole had become a comfortable “home away from home” for us. There were two bedrooms, each one fitted out in old wood with plenty of little cubbies to store our gear and clothes. In between was the single bathroom which had the bonus of a small sauna next to the shower. I admit that it was one of the features that had sold me on the listing, although I hadn’t realized that it was only big enough for two people at a time. The kitchen was fairly well-stocked for us to prepare our own food if we had wanted to, although we all found the lack of wine glasses to be a serious oversight in a country known for its wines. And the living area was cozy with a large couch, a big eating area and a fast internet connection. We really didn’t need anything else to feel comfortable while we were here.