Our room in Pula was quiet and I slept well. Our gear was dry by the time we were ready to get dressed and the roads were calling to us to explore some more.

Pula is located at the tip of a peninsula, so in order to continue south and down the coast, we had to head north(east). The roads were mostly dry (or, if they were wet, it was hard to tell) and we were making good time. For a while we were inland and passing through infrequent villages but then: we hit the coast! 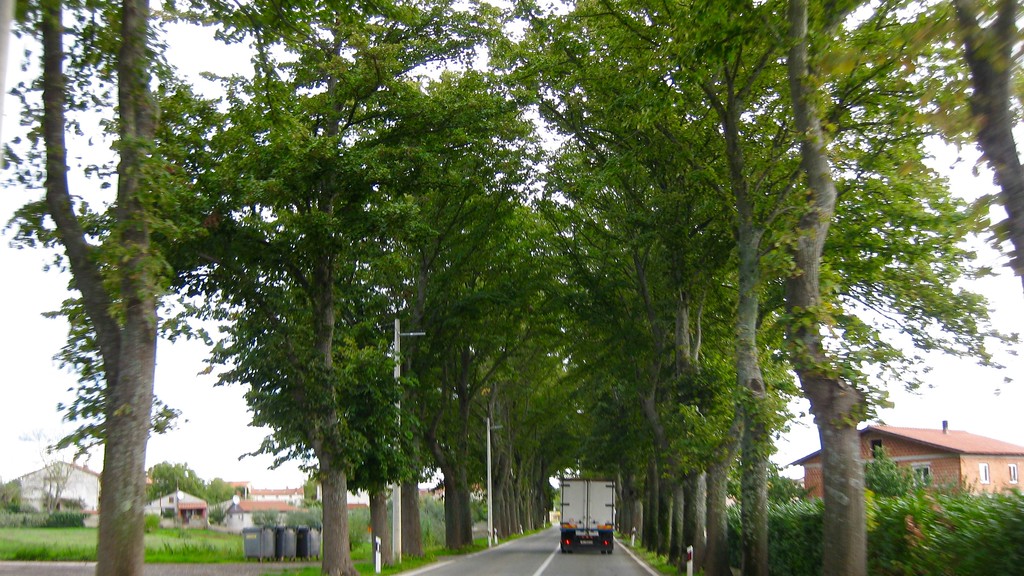 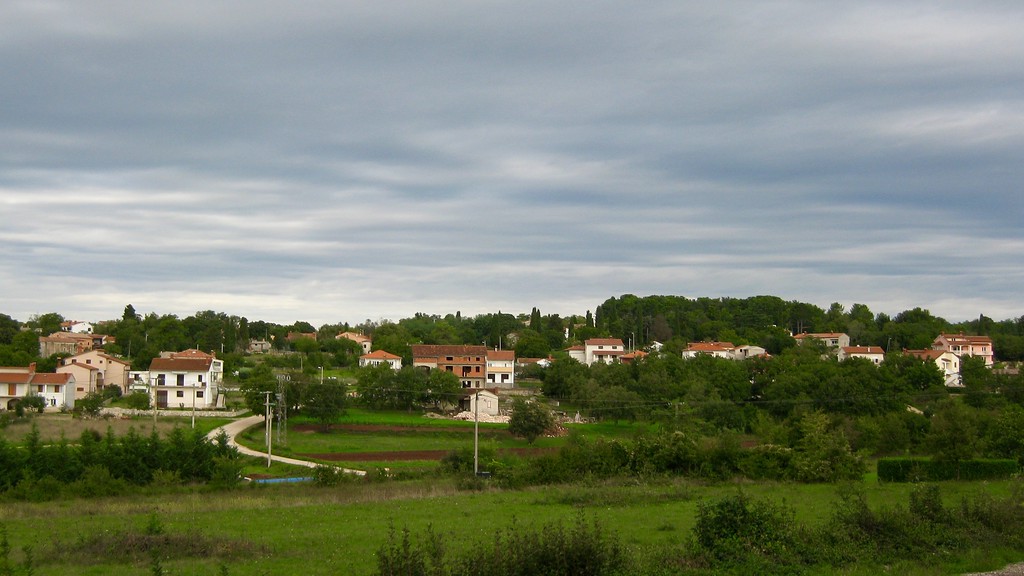 We saw many quarries on this trip – can you spot the trucks? 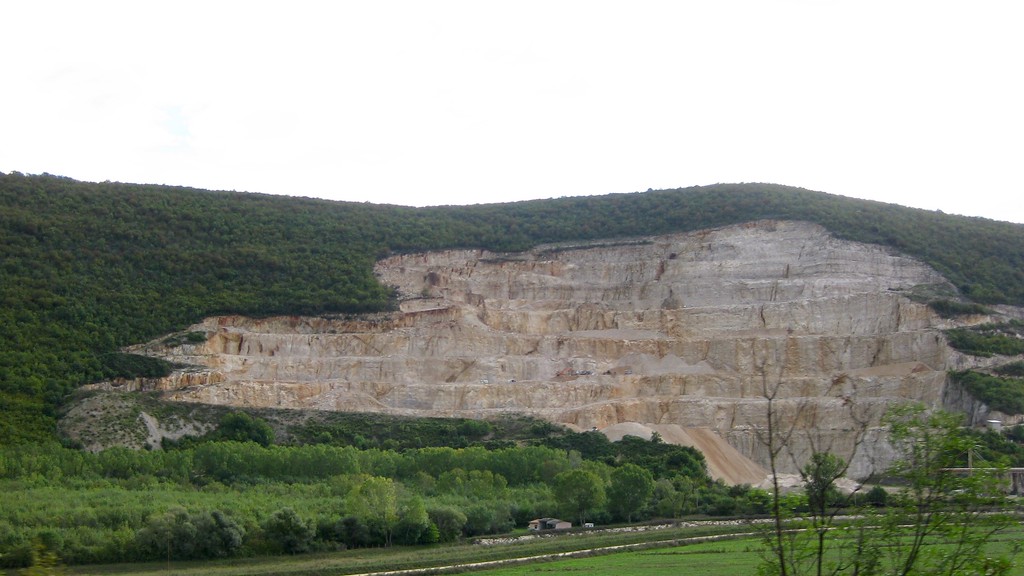 The coast! (and the first of many photos of it) 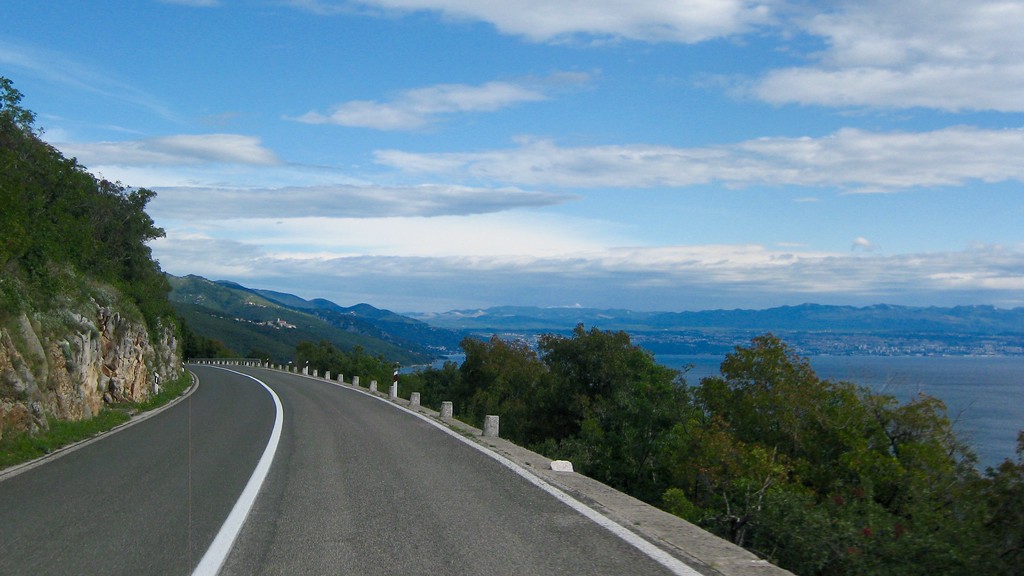 Fortunately the weather was very cooperative today. We were blessed with dry roads and great views. And what great views! Every bend in the road brought something new to see. Towns made up of white buildings shone in the sunshine and the forested hills provided a deep contrast.

Someone lost their way! 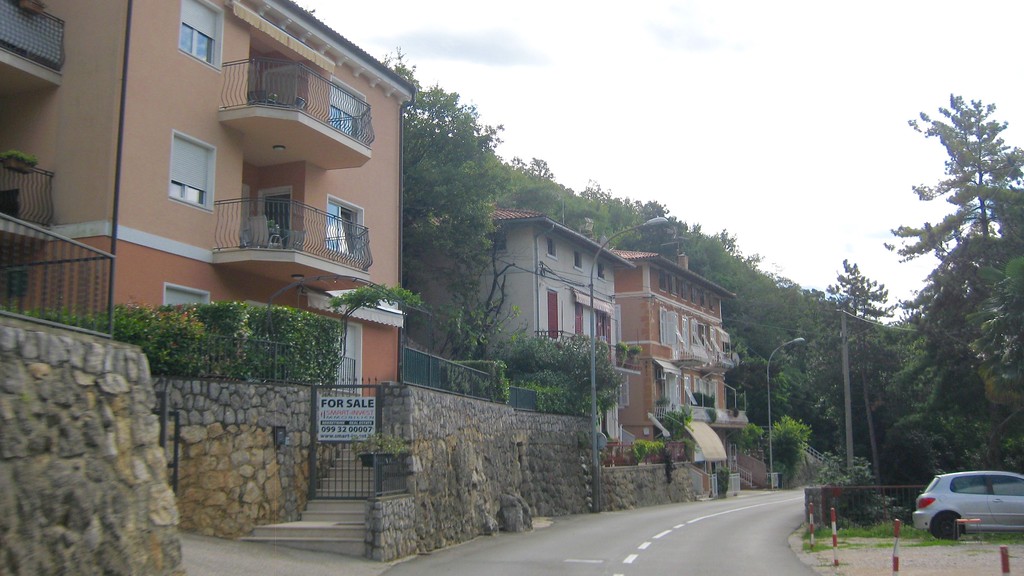 We made the bend from traveling northeast to south – we would be traveling south for the next couple of days and I was looking forward to seeing more of the coast. We tried to avoid the highways and the accompanying tolls when passing by Rijeka, which was surprisingly easy to do. Once we got out of the “big city”, we returned to coastal views and more interesting roads. 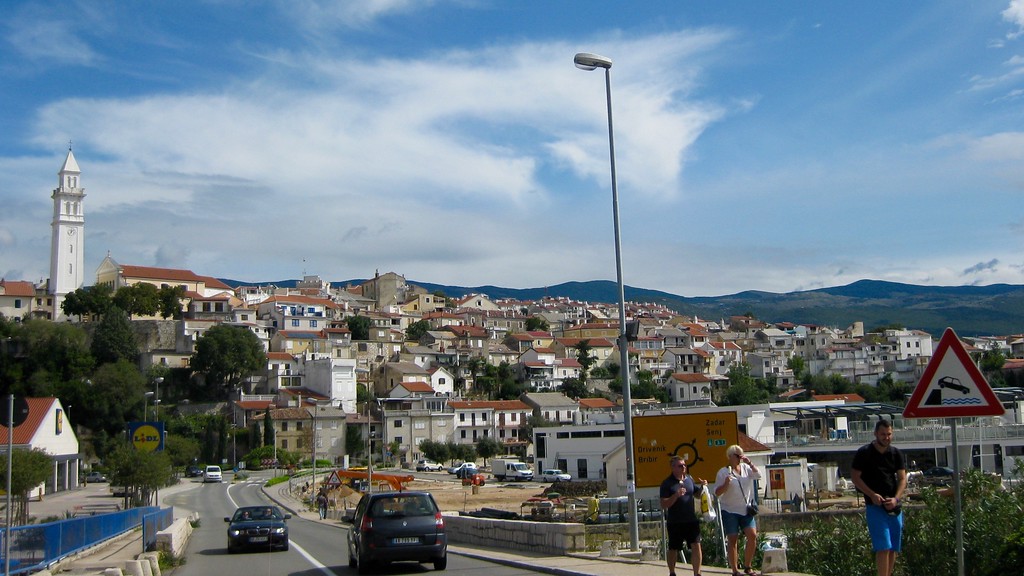 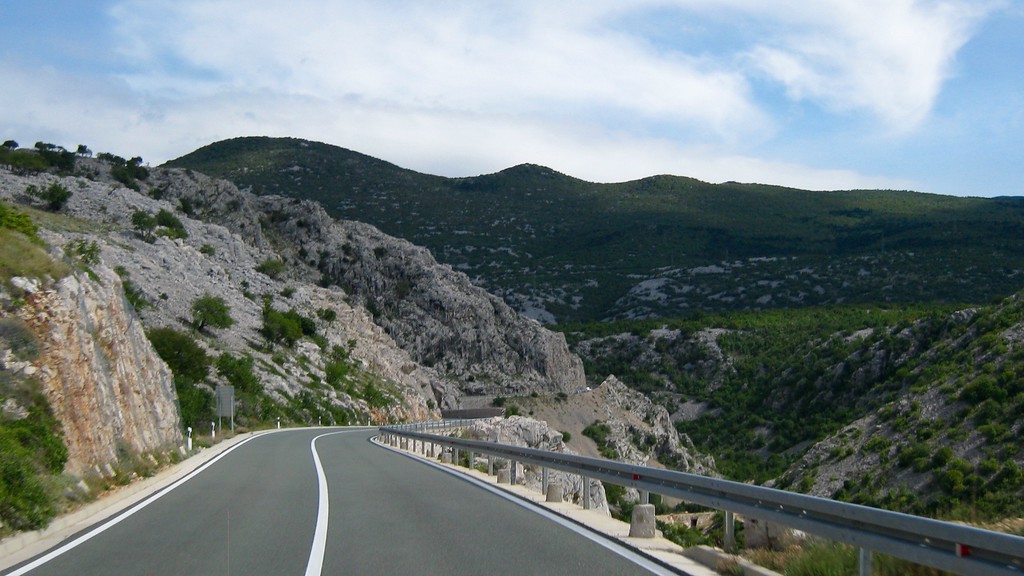 Somewhere south of Crikvenica we came across yet another type of challenging weather: wind. And not just a gusty breeze, but an honest-to-goodness gale. We estimated it to be about 50 kph, but with some gusts up to 70 kph. The wind couldn’t be predicted. Sometimes I was leaned into a corner and the wind would come along and push me over a little further – not exactly confidence-inspiring! Or the opposite corners, when I was leaning into the wind and then a gust pushed me upright, thereby straightening out my line and threatening to push me into the other lane! Dan and I kept each other company with frequent exclamations and swearing as our bikes were pushed around.

Nothing like the threat of wind pushing you over the edge to keep you on your toes!

It doesn’t show up well in the photos, but the wind was so strong that whitecaps were being whipped up in the sea and the froth from them was carried up, high above the water itself. It made for quite the sight.

Despite the focus required to stay on the road, it was still possible to appreciate the beauty of the landscape around us. The vegetation was sparse but lush. Piles of white rocks were scattered everywhere, making me wonder how anyone could ever use this space for anything remotely agricultural. Yet this is where I first noticed the plethora of stone walls that striped the landscape. There were so many walls and yet so many un-gathered stones still in the fields that it seemed like a fool’s errand to stack them. Plus, as there was no evidence of current use, what was the point? Well, I did a little digging and found that these walls extend back in time – possibly as far back as the 4th Century! Primarily used for livestock and territory division, they also provided shelter against the same winds that we were experiencing now. Of course, getting a photo of these stone walls proved to be difficult from the back of the motorcycle, but here’s a shot of the typical landscape we were in: 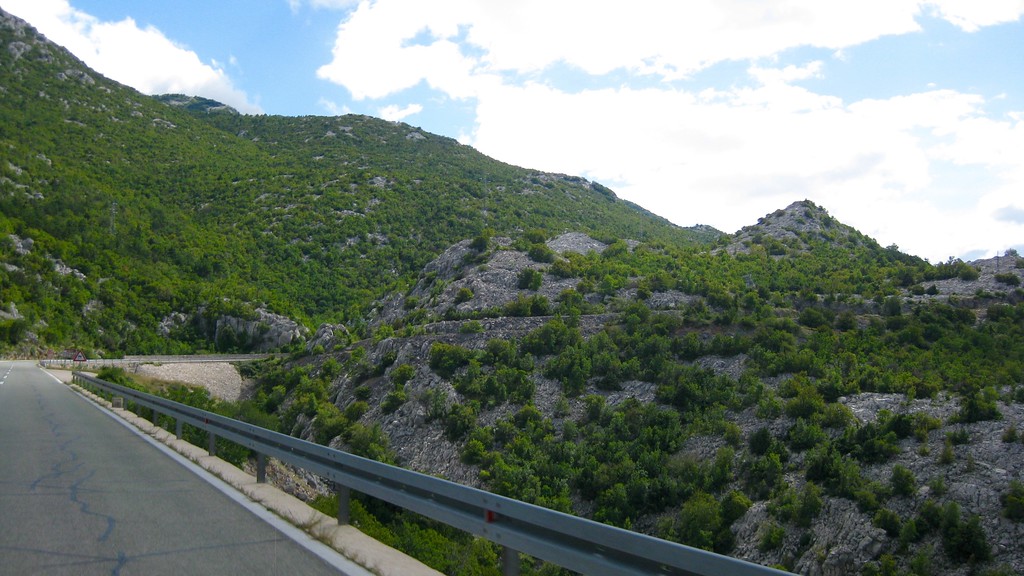 There is a lot of empty land along this stretch of road and the settlements we saw were few and small. Traffic was light, but as we got further south (and later in the day) we saw more cars, campers and motorcyclists on the road with us. The pavement was in excellent condition and I was once again thankful that it was dry underneath the wheels. I think that a combination of wet pavement and high winds would have been verging on “highly uncomfortable” to ride on! 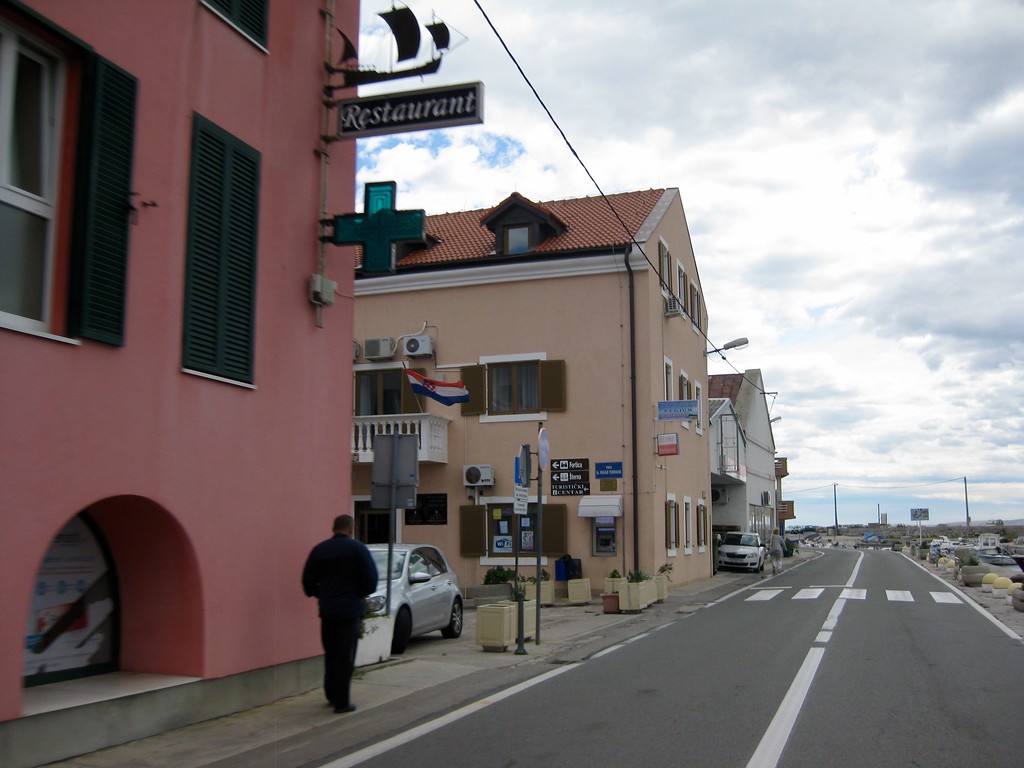 Photos from the Adriatic Highway tend to focus on the coast; here’s a photo in the other direction

Yep, the wind is still blowing

We eventually stopped in one of the small towns for lunch. We decided to go for “quick & easy” by just hitting the grocery store and buying lunch supplies. The signs advertising local tourist businesses were in German and English, but it was still a surprise when we pulled into the parking garage of the store to discover that the (poorly parked) car nearby was from Basel. Ah, the world seems like such a small place sometimes!

Eventually we left the coast behind and followed the road west out onto a large bulge of land that projects into the Adriatic Sea. Our goal for the evening was Zadar, an ancient city located on a small peninsula. In fact, it is the oldest continuously inhabited city on the Croatian coast! It was a walled city, although its position on the peninsula meant that only one side actually had to have a wall.

We followed the GPS around the old city streets and down some lanes that I would have thought should be pedestrian only, but eventually found the location our AirBnB host had given us. Of course, finding a location and finding the actual person we were to meet wasn’t so easy, but Dan sent him a quick text and we were soon pulling our bikes into the garage space.

We were in the center of the old city, just a couple of blocks away from the famous Sea Organ and countless ancient buildings and ruins. Once we had unloaded the bikes and adopted more comfortable walking attire, we went out to explore.

First up: the Sea Organ! (for sound check out the link above) 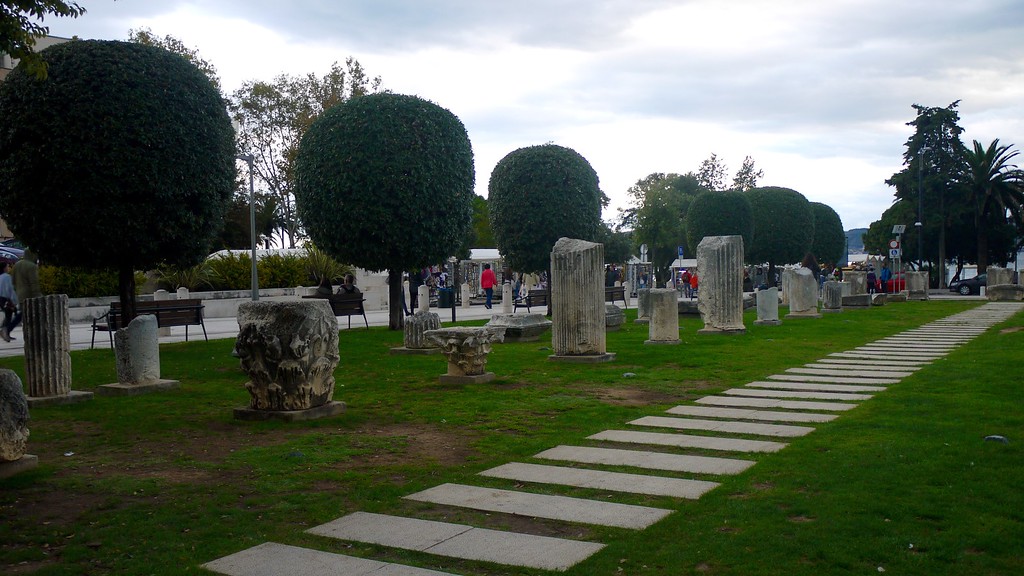 At one end of town was a sign with an interesting tidbit of information: in front us us stood three city walls from three distinct periods of time. On the left is a Roman wall, the middle is from “late antiquity” and on the right is from Medieval times. 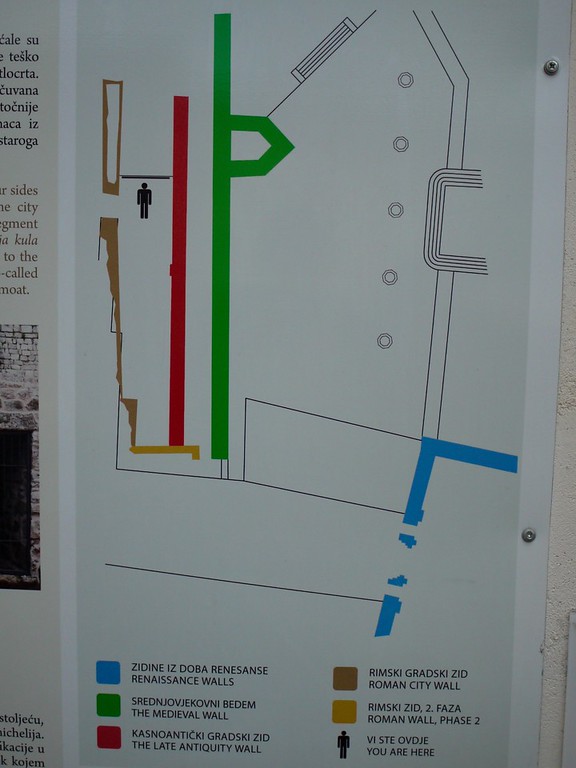 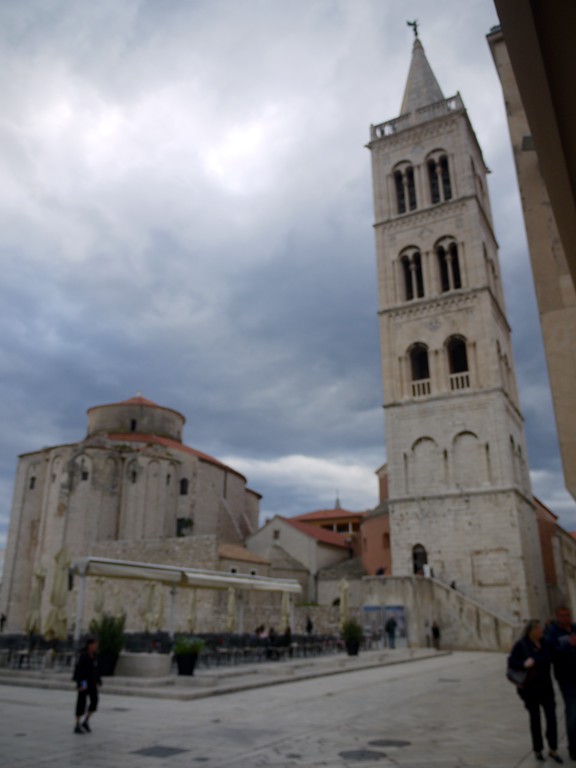 After wandering around a good portion of the old town we decided that a climb up into the Bell Tower would give us a new perspective of the town. It was a little pricey just to climb some steps, but what the heck – we were on holiday!

Steps to the top

At the very top is an angel; she is actually a weather vane and spins with the wind direction

The old town, with the modern city in the background

Looking north – where we had ridden from earlier today 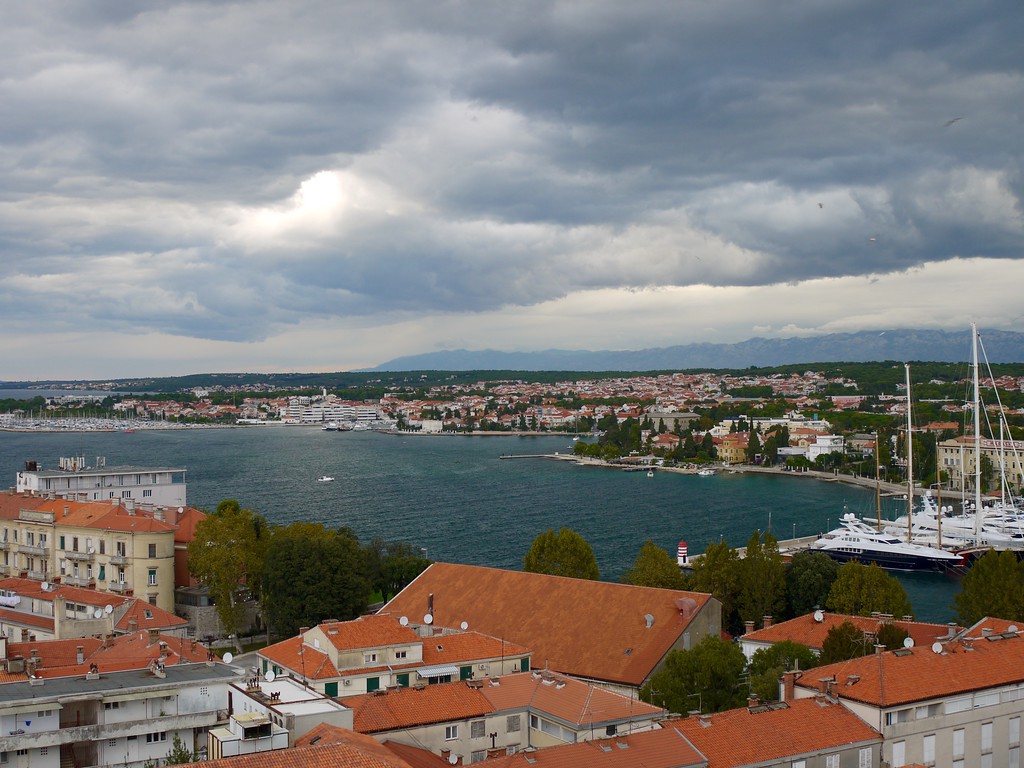 We descended from the Bell Tower and decided to explore the park on the south side. It was a good walk and we enjoyed the peace and quiet of the green space. Our host had recommended a couple of places for dinner and they were near the park, so we could kill two birds with one stone on this little foray.

A view from the park

My steak, while it looks good, had very little flavor of its own. I added some salt, but it took a surprising amount before I felt like I had succeeded. While we sat there and ate, we discussed the tourists we had seen – and heard – so far that day. There were almost no British tourists, a few Americans and many varied nationalities among the rest.

After our meal we returned to our room. We had begun pre-planning for the next evenings’ accommodations before leaving the current ones. No more last-minute searches at the end of the day!

Dan helps plan for the next night’s accommodations 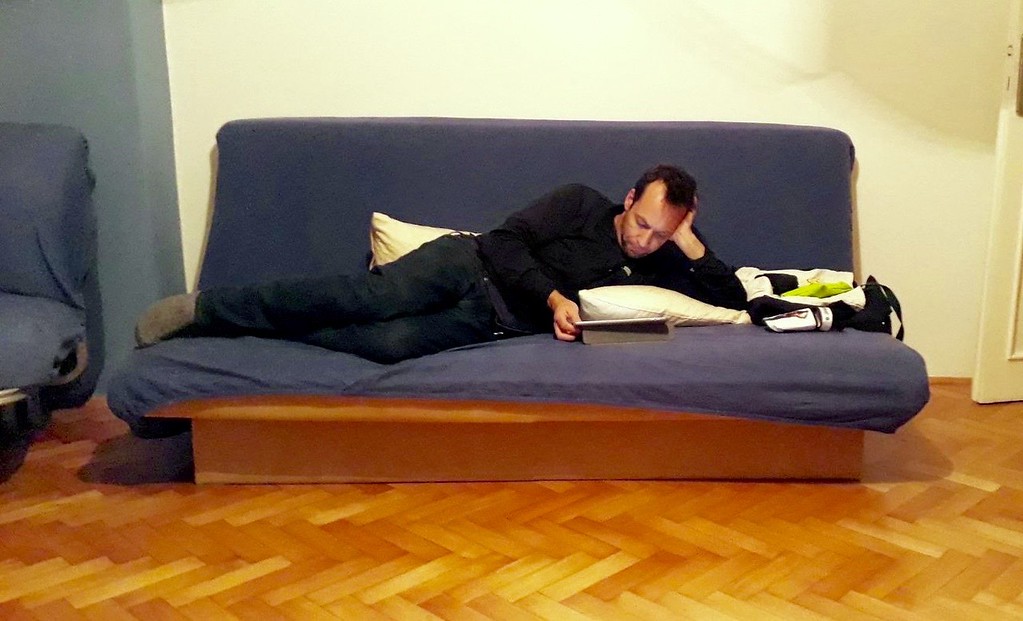