Our timeline had been altered. The distances I thought that we could cover had included a full day of riding on Sunday. Now that we were half a day behind, the daily goals would have to be adjusted. Today we decided to head to one of our sight-seeing spots: Skocjan Caves in Slovenia. But first we’d enjoy some fresh pastries in the hotel’s tiny cafe.

Our boots were mostly dry and the weather was warm enough that I could strap our still-damp gloves under the Rok-Straps that were holding down the duffle bag on my pillion seat. My bike gave some hesitation when I tried to start it, but with a little bit of babying, I got it to run. I knew that as soon as the motor warmed up it would be smooth again, and each new tank of fuel would bring improvement.

Our first stop was the trusted Agip gas station next door. Even then, I interrogated the gas station attendant to confirm that the fuel nozzle we chose was the correct one. Everything confirmed, we filled up Dan’s tank and topped up mine with good, quality gasoline. Now we could resume our holiday!

The morning’s route was unclear. I just followed the GPS along its random lefts and rights and we eventually got to our location. Along the way, we made a quick stop at a shopping center to buy lunch ingredients, making and eating our sandwiches just outside. As we stood in line to pay for our food, we watched the man in front of us unload his shopping cart and purchase 170€ worth of pure alcohol – and a few grapes. I would have loved to see the party he was planning! As we sat outside, we watched two F18 jet fighters fly overhead during our lunch stop. There is always something going on, if you look for it.

Clouds in the mountains

We had blown through the plains of Italy on the autostrada, cruising along at 130 kph and burning off any remaining diesel for sure. Our goal, Skocjan Caves, came highly recommended by the internet. Photos I had seen intrigued me and it was now conveniently located near the end of our day’s ride. The GPS took us through some scenic backroads in Slovenia and Dan and I immediately fell in love with the country. It was damp and cool again, but at least it wasn’t a soaking rain. We pulled into the visitor lot of the Caves and went to the information desk to see what our options were. Hourly tours would go on until 5 pm. It was currently 3 pm. When we said that we would find lodging and then come back, one of the women behind the desk made a suggestion of a B&B just down the road. We got back on our bikes and found Bed & Breakfast Pr Vncki, less than two minutes away. There was no one there, but Dan called the number listed on the door, got a hold of someone who confirmed that they had a room available and where we should look for the key so we could let ourselves in.

Our home for the evening 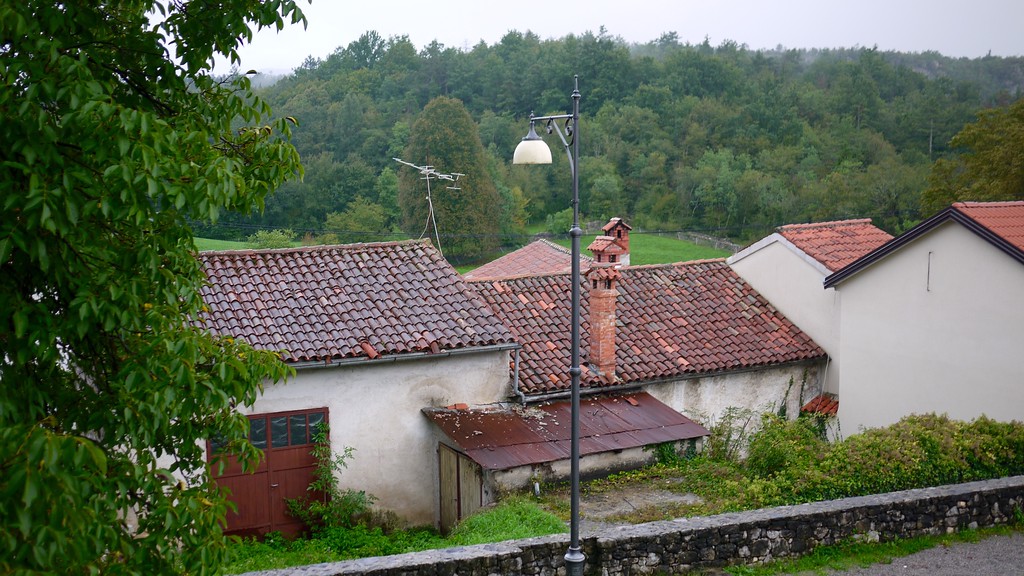 We found our room, dropped off our gear and changed into dry and comfortable clothes. The tour that we planned to take would be 3 kilometers long, so we wanted to be sure that we would be comfortable for it. We popped back to the Visitor Center, bought our tickets for the 4 pm tour and took a seat in the cafe to enjoy a quick something to eat.

Bike-only parking! (and the only bikes there)

The cave was amazing. A huge group of people followed our guide down the road, through a trail in the woods and down to the cave entrance. It was a man-made entrance and it was there that we were split into two groups, each one about thirty people. It was very clear that no photos were allowed to be taken, and honestly, unless you have the right equipment, it was pretty pointless to even try to capture anything in this dark location. Naturally, I tried anyway… 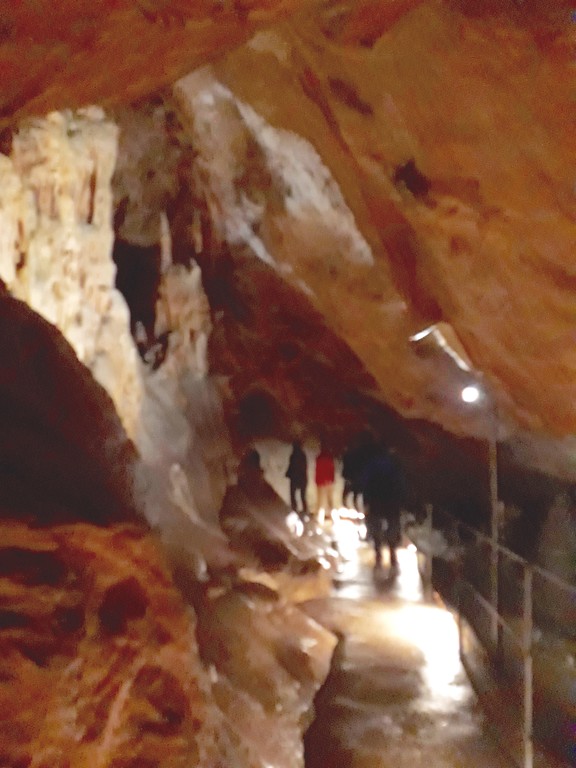 The cave system really was amazing – and I mean that. The calcium deposits were intricate, the stalatites/mites were everywhere and the sheer size of the caverns were breathtaking. The different regions of the cave were described by our guide, giving us our depth and the cave’s history. Yet when I asked her about some of the early explorations she was not able to give me any specific dates, and I had to ask her about some square pools of water I had seen, wanting to know what they had been made for. At one point our guide stopped us and described a calcium formation before us, and then made a comment about the bat population of the cave system. She said that if we were quiet we might hear the bats as they chattered in their roosts. I listened and could hear them, but poor Dan couldn’t pick out the sounds. In case you were wondering, here is a video of them, although greatly amplified compared to what I could (barely) hear.

And then came the hard part: getting back up to the surface. We had been told that it would be five hundred steps down during the cave tour. That, of course, means five hundred steps back up. Still, getting out of the cave was a lot easier than it used to be: we could see the rusty remains of the early explorers’ via ferrate equipment still protruding from the rock walls.

The exit point of the cave tour

Tiny people near the cave entrance

The Reka River in daylight

With the tour over, we returned to our room and prepared for dinner. Our host had informed us that we could join them at 7 o’clock for dinner if we were interested. There was so little else in the area to choose from that we knew that we would be foolish to pass up this opportunity. What we hadn’t expected was the absolute culinary skill that came out of the kitchen. The food was local and fresh and wonderfully prepared. I had mushroom gnocchi and Dan had a mushroom omelette. It was mushroom season! There were two other groups of guests staying at the B&B and while they were there and ate at the same time, we all kept to ourselves for our meals. It was just as well, as I wanted to focus on the meal that had been set before me.

Dinner at the B&B

And so ended our day…