I had vague hopes that our departure from Bled would be under sunny skies and on dry roads. The only thing that that actually went my way was that it was not raining. Oh well – I should expect such things when vacationing at the end of September in the mountains. At least there wasn’t any snow!

Our ride today would be through the mountains. I had chosen a compromise of twisty mountain roads and more direct valley roads, but still keeping our riding time to a minimum. We had informed our next host that we would arrive around four o’clock and I wanted to be sure that we had a relaxing ride.

An interesting barn style common in this area

No rain yet, but low clouds 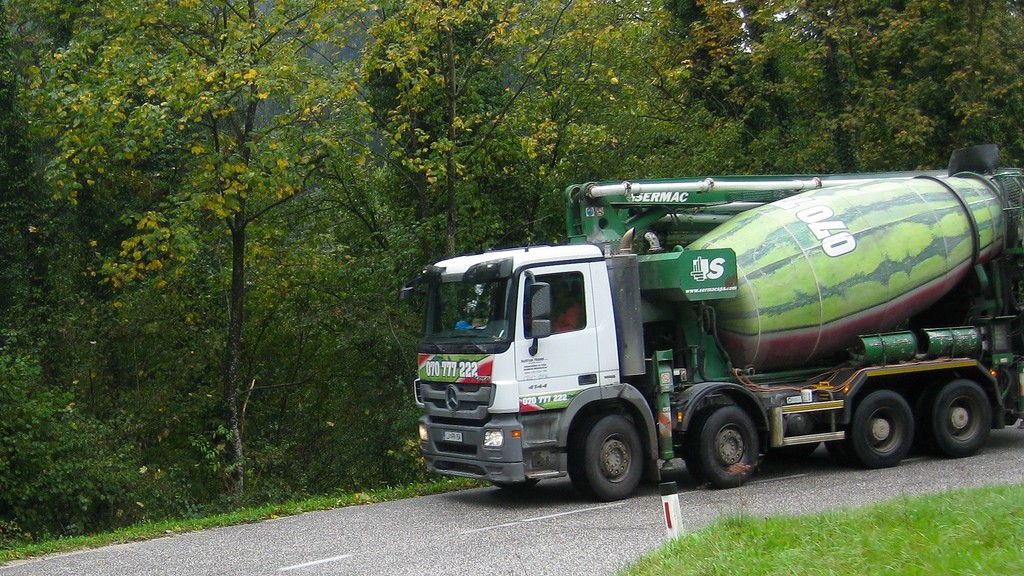 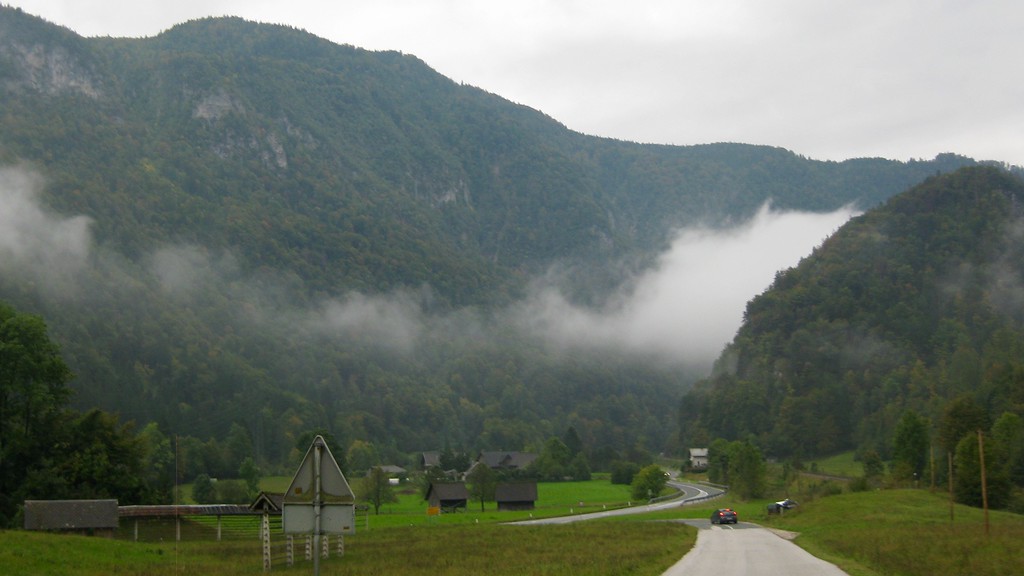 Our departure from Bled was simple. There was some morning commute traffic, and a tour bus or two, but the roads were pleasant and followed the meandering Sava Bohinjka (River). Then, just a few minutes outside of Bled, we left the main road behind and started going up. I was worried that the elevation change would put us into the clouds and possibly the rain. Actually, we got above the clouds and the roads (eventually) dried out. It was turning into a beautiful day!

The valley we came up from 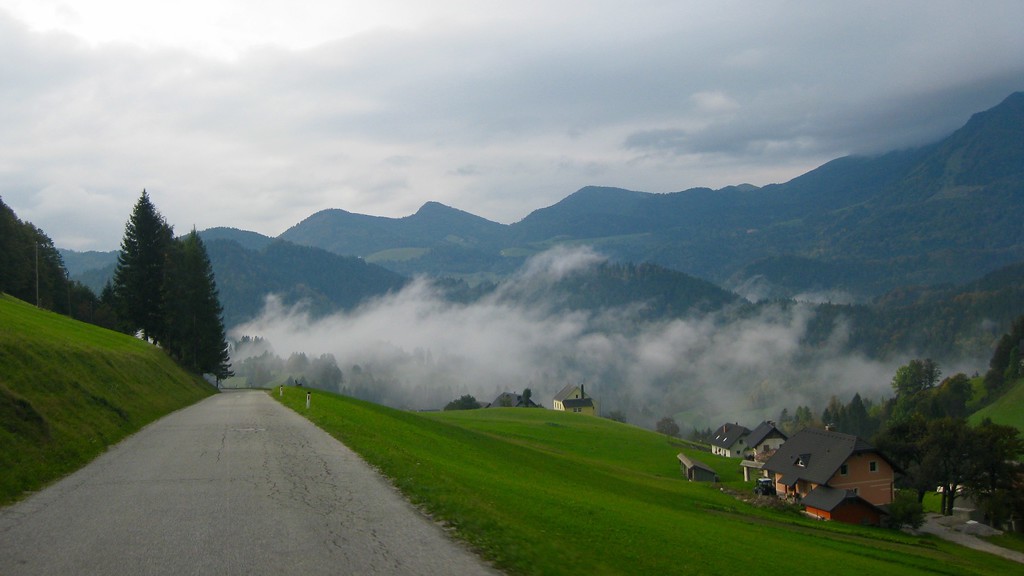 The beauty of “imperfect” weather

Coming out into the next valley

Early fall in the mountains 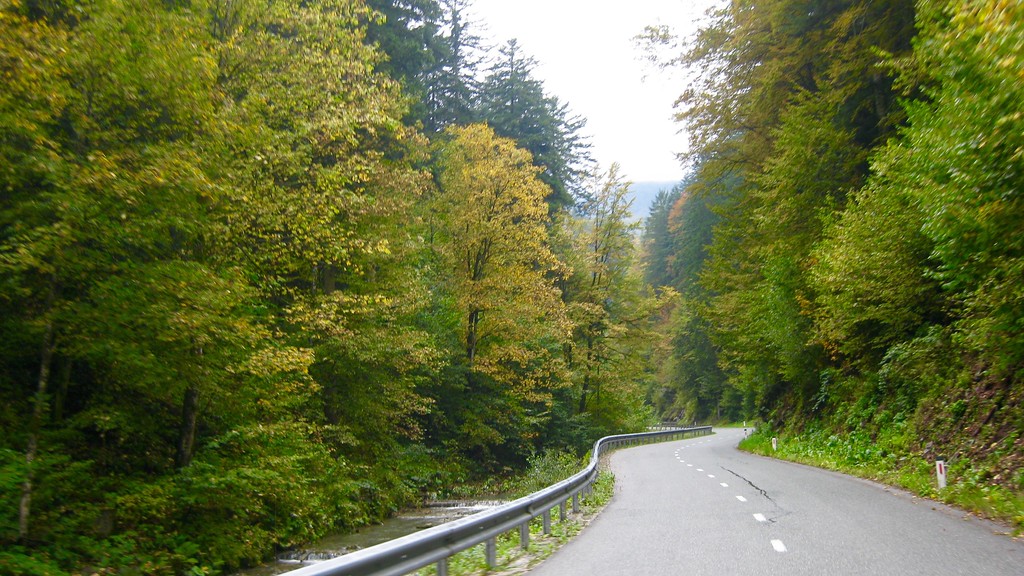 We were enjoying our romp through the mountains. Colorful forests, harvested fields, empty rough roads and tiny villages filled our morning. It was delightful and the time passed quickly. When we reached a construction traffic light, it was the first time we had to stop for anything for over an hour and a half. We waited patiently for the light to turn green but when it finally did, the cars in front of us didn’t get very far before they stopped again. Due to the nature of the curved roads, it was a while before I could see what was holding us up. I was in complete amazement when I did see it: real life Romani (gypsies)!!

There were three full sized wagons and one smaller wagon, each pulled by a team of horses. Dogs trailed alongside and the Romani themselves were stationed to direct traffic, guide the horses or help push the wagons. Dan and I mused over where they had come from, where they were going and what they “do”. I felt sorry for the horses as they worked to pull the wagons up the hill, and the people who were obviously trying their best to keep everything out of the way of the faster automobiles.

Eventually we were able to pass and seeing everything up close just piqued my curiosity even more. Who are these people and how do they live?

It was a long gradual downhill after we passed the caravan and I continued to wonder where they were going, even if only for that night. We were nearing the end of the mountain roads and coming to a wide valley. More and more bicyclists were on the road with us, working their way up the mountain road we had just come down. At Most na Soči I was greeted by the sight of the Idrijca and Soči rivers. The region has a deep history, although much of it was inundated when the Doblar hydro plant was built in 1937. I also learned that there is a 1948 law called “Law on Names of Settlements and Designations of Squares, Streets, and Buildings” which was enacted to remove religious elements from place names. Therefore many names that had endured for centuries were now reduced to the most basic of forms. The Slovenian equivalent of ‘Saint Lucy on the Soča River’ became now known simply as ‘Bridge on the Soča River’ – doesn’t have quite the same ring to it, does it? 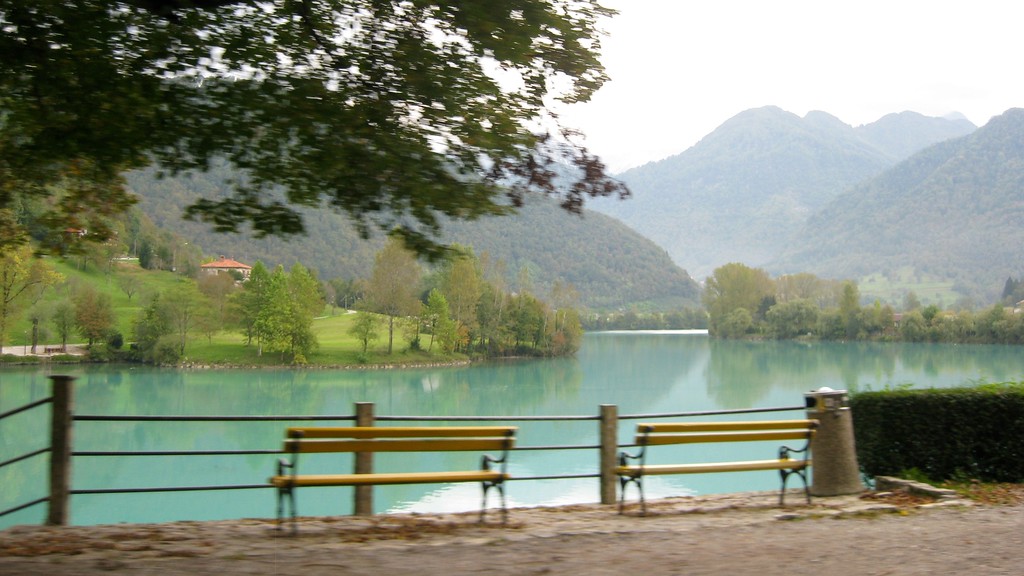 Following the valley to Tolmin

In Tolmin, a slightly larger town by the morning’s standards, we stopped at a grocery store for lunch. It was a short stop, with us just eating on a bench out front, watching the cars come and go and the pigeons sit on the glass roof of the entrance. The weather was getting better with each passing mile, much to my delight. 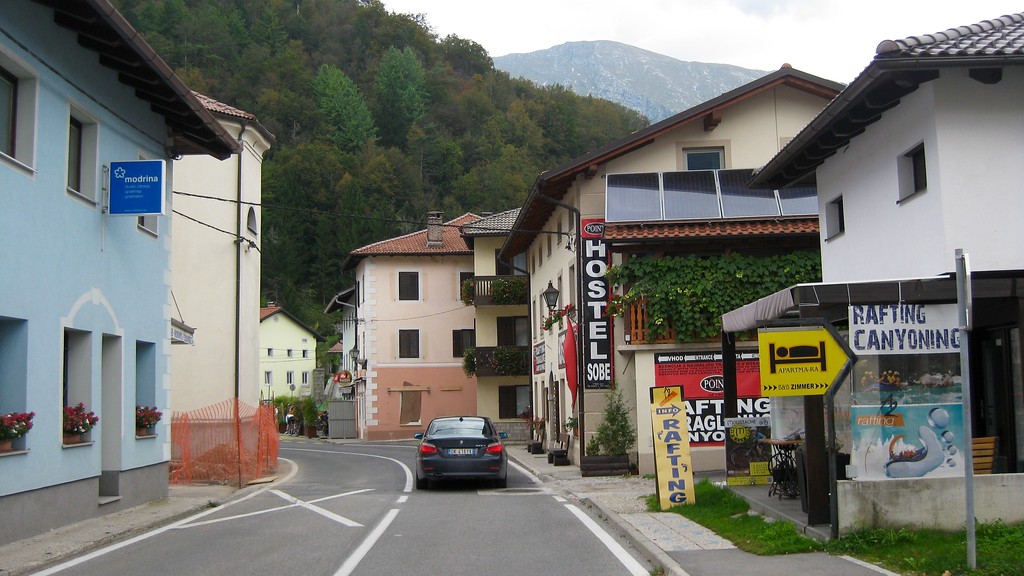 The GPS indicated that we’d be crossing into Italy any minute, but the road was so mountainous that I couldn’t tell how they’d squeeze in the guard booths. Then suddenly we were in Italy! There was no stopping here – just a sign at the side of the road indicating that we were in a new country. 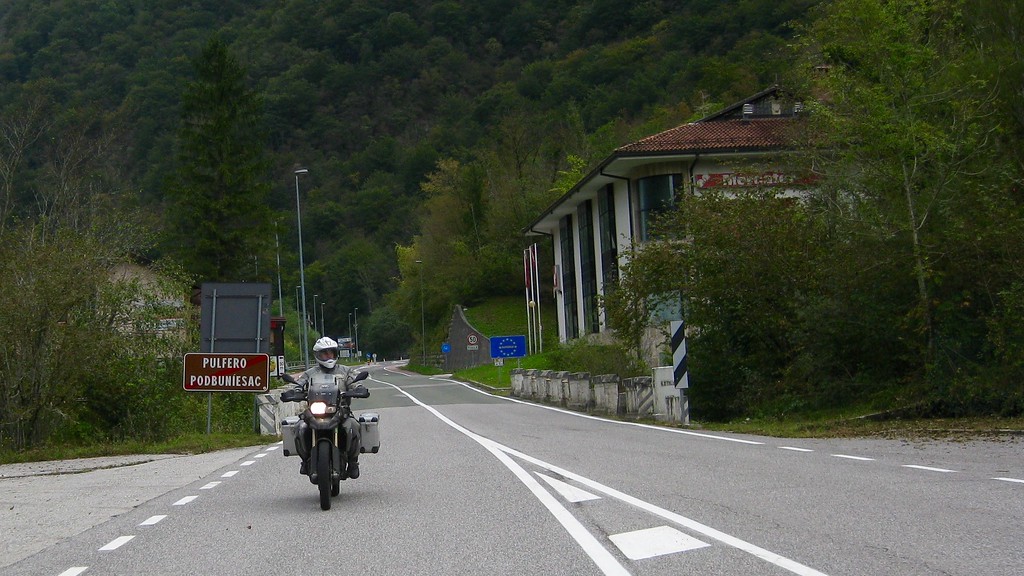 We had left the mountains behind and were in a wide, warm valley. Grapevines lined the road and the pavement stretched out before us.

The GPS had been set to avoid tolls but apparently something got screwed up in the morning’s routing. Toll booths on a motorcycle are the devil and I was annoyed that we now found ourselves in this situation. Oh well – the timing on the GPS had given us our ETA and any changes to our routing now would cause us a delay in our planned arrival. The toll roads won this time!

Dan dropped his glove at the toll booth – whoops!

One of many tunnels on this trip 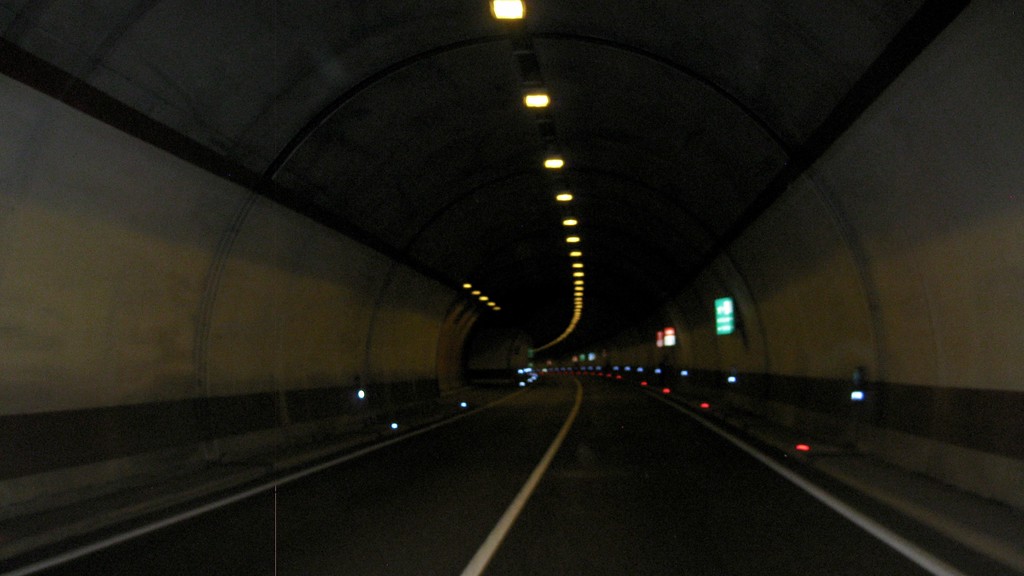 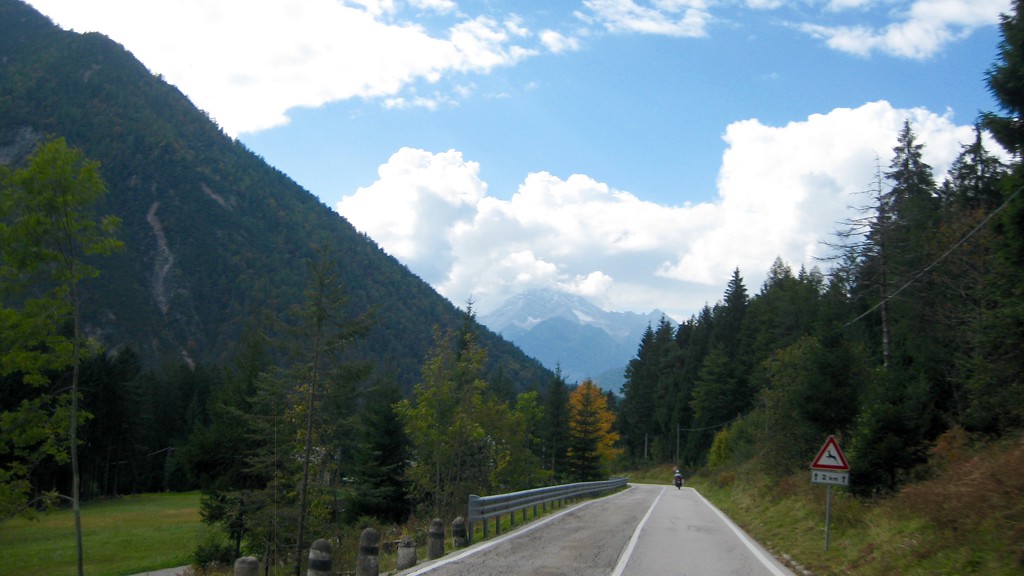 The Dolomites in the sunshine!

The setting of our next stop: Cortina d’Ampezzo 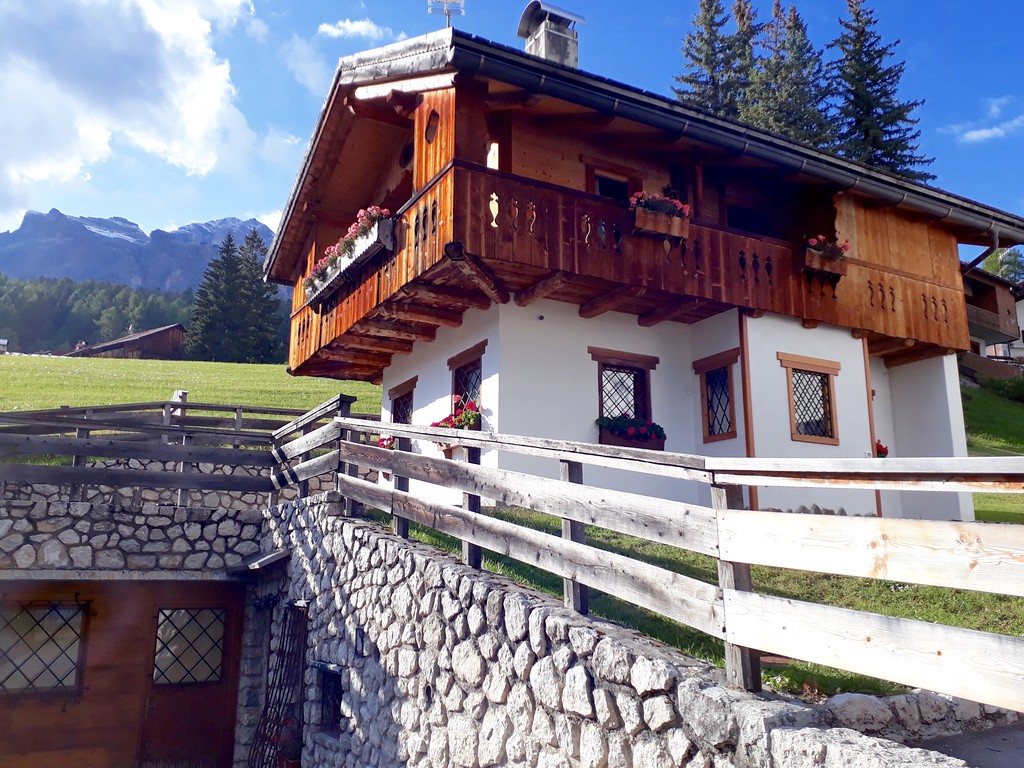 Our door to the Hobbit Hole

It was cozy inside

Meeting up with our friends went just as planned and we quickly settled into our apartment, cheerfully dubbed The Hobbit Hole due to it be entirely underground. Our friendship picked up just as we had left it a year ago and we spent the evening getting caught up and planning out ideas for the next three days.

The bikes were tucked away in the garage; it was time to get in some exercise!