I had mapped out a general route for us today, but our host also rides motorcycles and offered to give us his suggestions. As I laid the map out on the table and traced a line north and west with my finger, he shook his head. “No, no, no. You should go this way” and he proceeded to trace a different line on the map. Figuring that he would know the local roads better than I, I re-routed my GPS and we finished packing up our bikes. I was a little disappointed that the first leg of today’s journey would retrace the last leg of yesterday’s, but it was such an enjoyable stretch of road, I quickly got over it.

Heading out under sunny skies 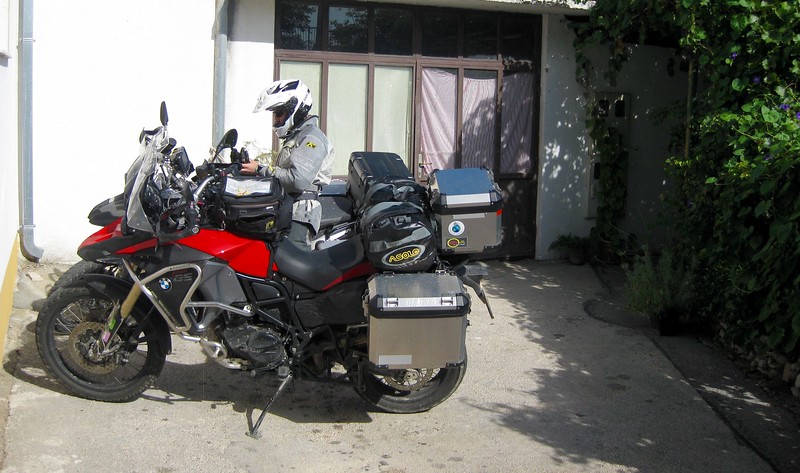 We followed the same roads as yesterday, but instead of crossing into Croatia, we veered north to circle around Buško Blato, a manmade lake nestled near the border and surrounded by high, green mountains. 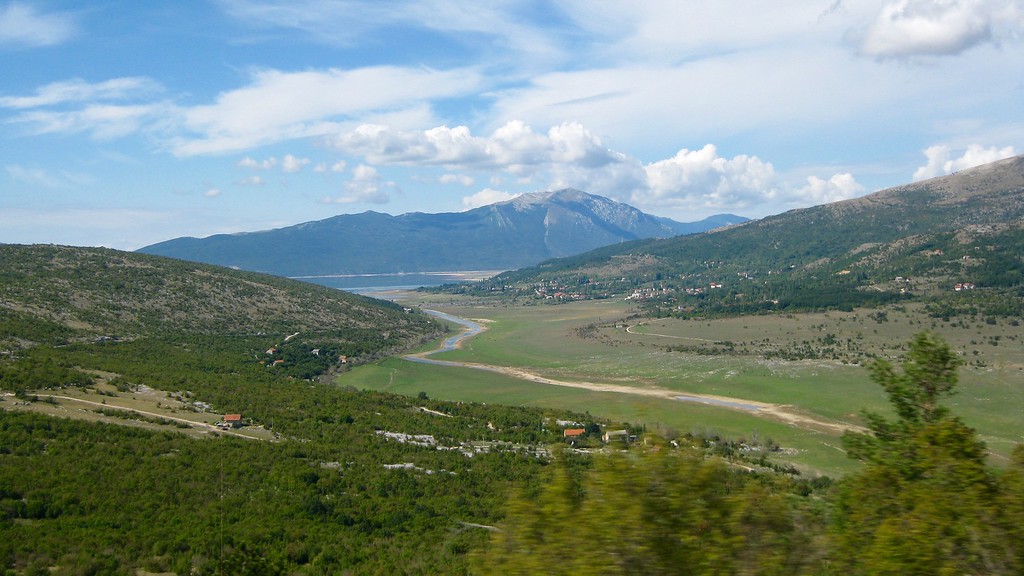 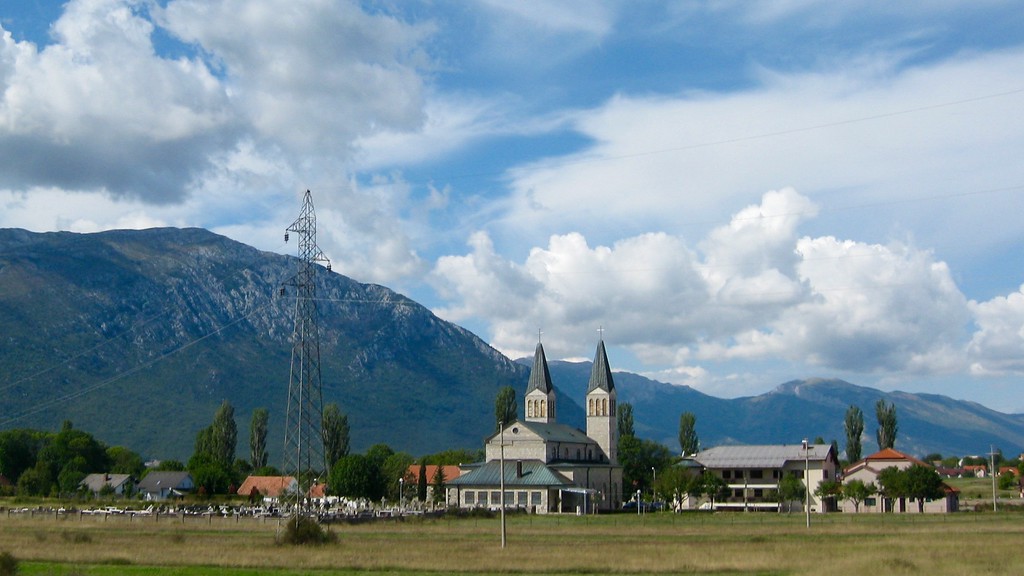 Crossing through the mountains

Our host indicated that from here the road would be extremely fun, although the words that followed gave me some doubt as to his definition of “fun”. He kept talking about how fast the roads were, and how much speed you could get up to. I don’t ride to go fast, I ride to explore and see things. Fast roads are usually straight roads, and straight roads are generally boring roads. We shall see!

The fast roads we were promised were located in the Livanjsko valley. At over 450 square kilometers, it is the largest karstic valley in the world. Of course I had no idea of this at the time; I just saw a wide, flat valley stretch out before me.

Leaving behind most of civilization 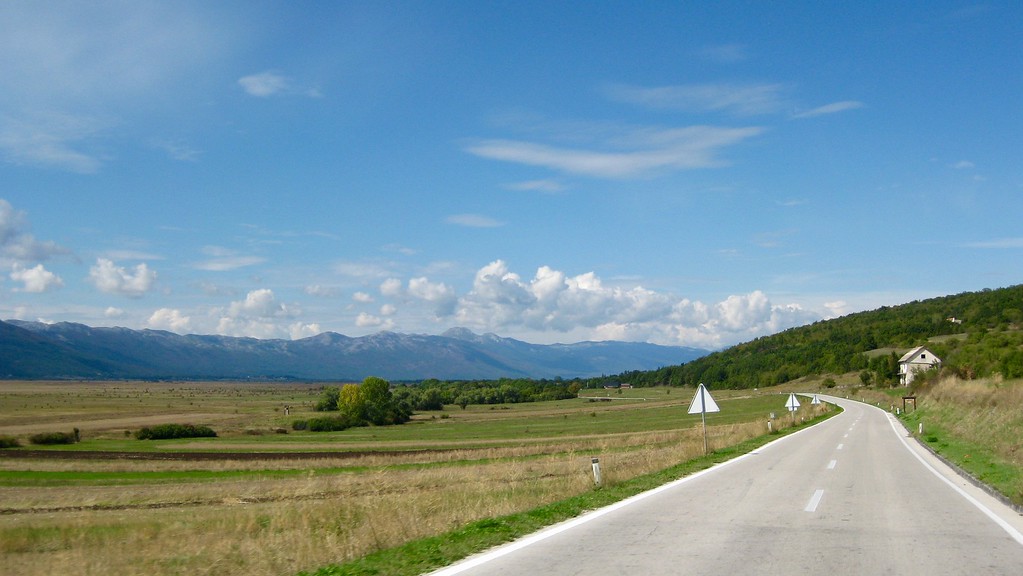 There is really not much here, but it was beautiful 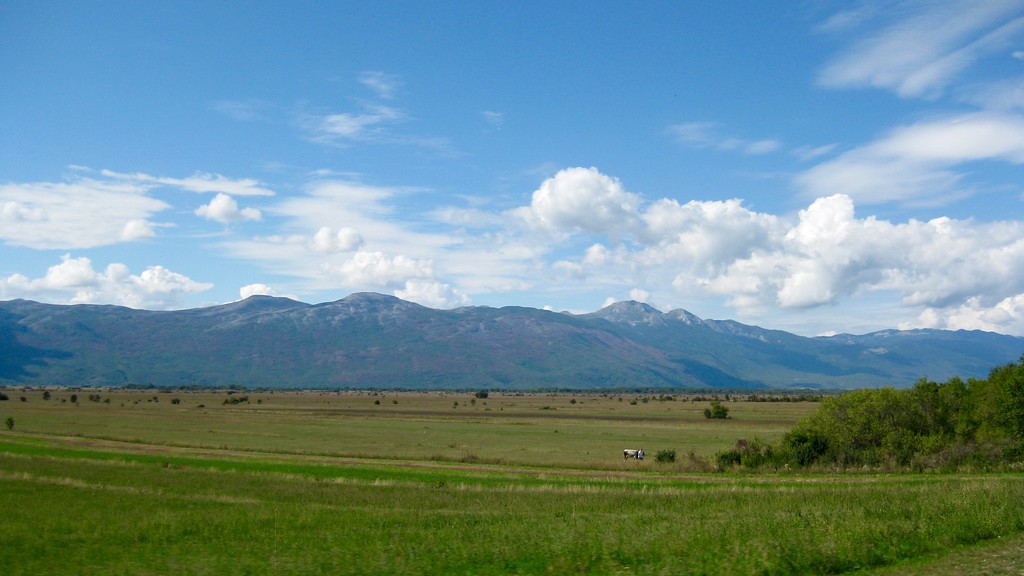 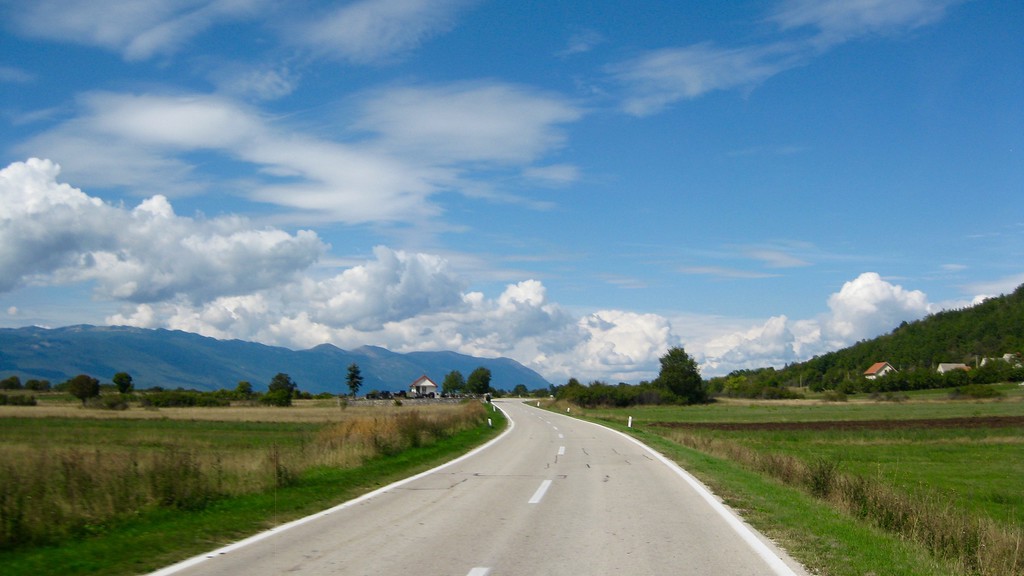 After not seeing anyone around for an extremely long time, we decided to pull over and change up some of our gear. The temperatures had risen and thinner gloves would be appreciated. And since we were off the bikes, we had something to eat and drink, too. As long as we were making this a stop of comfort, we also went off to water the trees. Naturally that’s when a tractor came rumbling down the road and turned onto the gravel road we had stopped near. A man was driving the tractor and an older woman with a headscarf was riding on the side. Two energetic dogs bounded alongside them, darting in our direction once they noticed us. They were friendly dogs but the woman called them back to her as the tractor disappeared behind a thicket of trees.

The view down the road 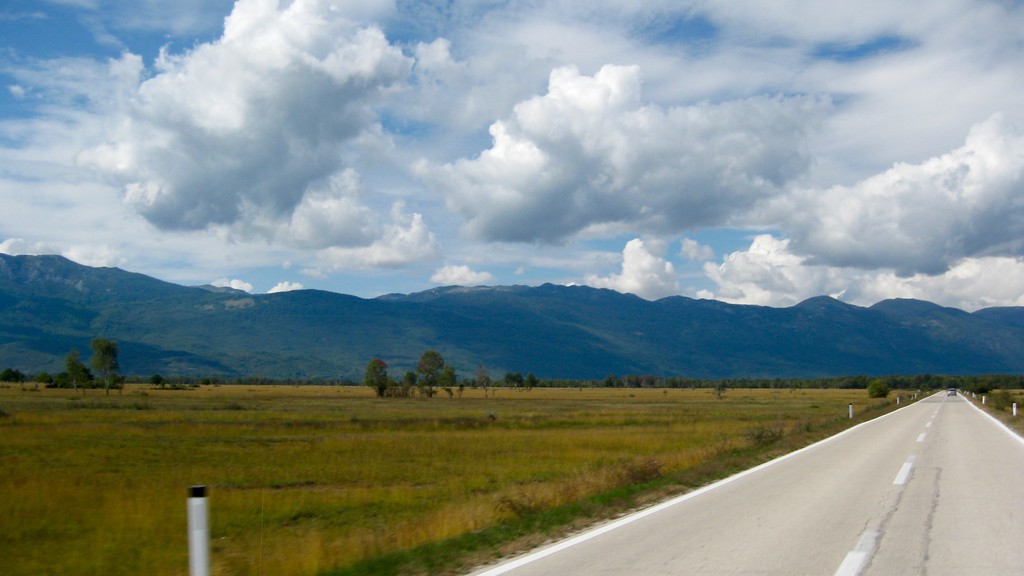 Many buildings without roofs along this valley

The effects of the Yugoslavian war were far-reaching. I heard about fighting in some of the cities throughout the region, but even riding through this remote valley, I could see that the fighting took place here, too.

Of the two dozen or so buildings in this (admittedly bad) photo, at least half of them were in ruins

When I had looked at today’s forecast it called for rain. Granted, the rain wouldn’t really hit until the afternoon, but it would hit the entire country. There would be no avoiding getting wet, once it started.

And so it begins… 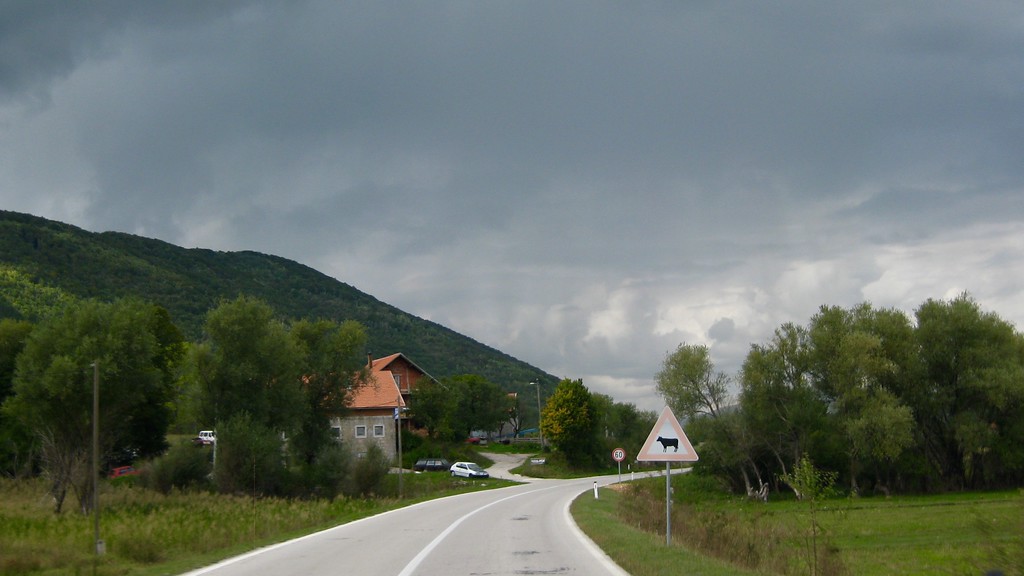 The rain sweeps across the northern end of the valley

Stopping near what appeared to be an old ski resort

A shepherd in the field

Coming out of the valley near Kolunić 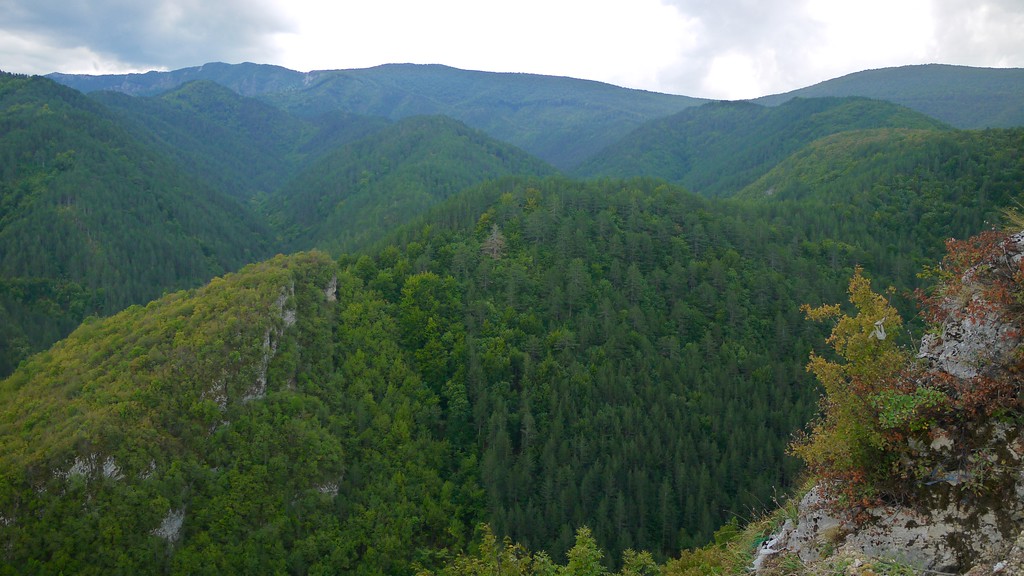 Time to cross into Croatia!

While researching for this trip I stumbled across a posting on the Horizons Unlimited Facebook page. It was a photo of an abandoned air base and it intrigued me. I sent a message to the poster and he gave me more details on where it was located. I had incorporated this into our trip and now we were almost there! I hadn’t told Dan about this “mystery stop” until this morning, so as to keep it as much of a surprise as possible while still making sure that he was interested.

Approaching our next stop

The airbase was somewhere nearby. I didn’t have the exact coordinates, and in looking at GoogleMaps, I guessed that it would be somewhere around here. We found a plane and some abandoned buildings, but nothing that looked like a hangar or a runway. We should keep on looking! 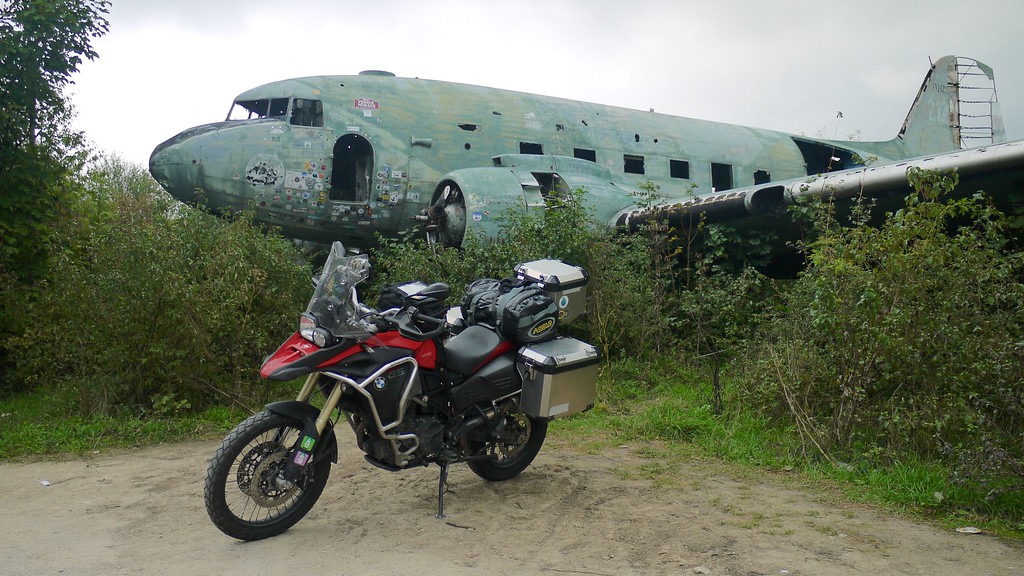 Looking for the airbase 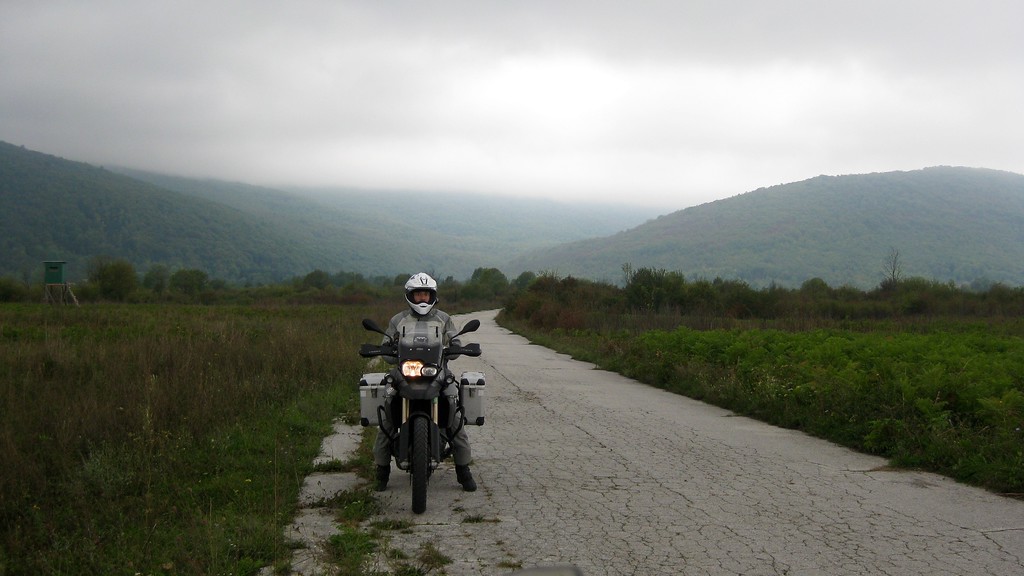 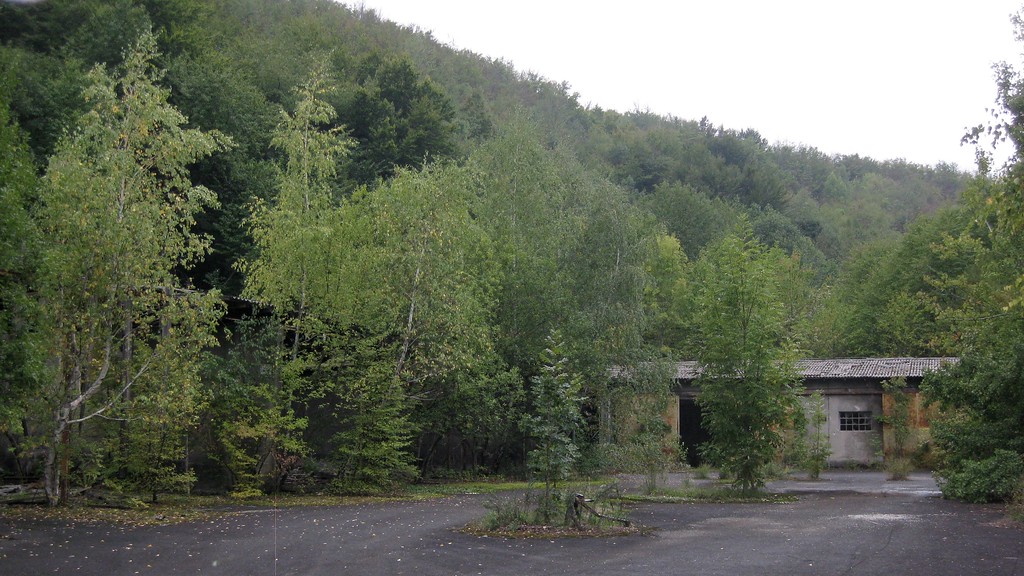 And then with the help of Dan’s phone, we found it! Just as it was pictured on the HU page.

Hangar built into the side of the mountain 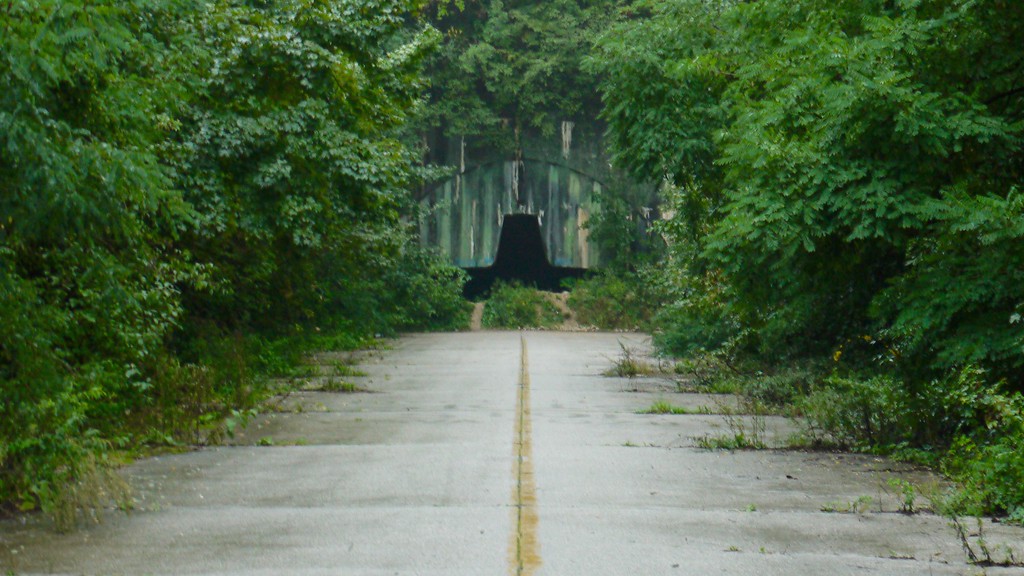 We parked the bikes and, prepared with a flashlight, we went inside. It was dark. Even with the light, the high ceilings and long tunnels stretched away in blackness. There were 3.5 kilometers of tunnels to explore, but we barely got more than a few meters inside before we gave up. With only one light between us, it was a difficult and possibly dangerous way to explore. The Wiki page has some good information if you want more details on the who and why of the airbase. In addition, if you want to see inside, check out this video that I snagged from the internet. These guys were prepared to explore!

We were close to our next AirBnB but it was getting darker and the weather was still threatening to let loose a torrent of rain. We left the runway behind and returned to standard roads and speed limits.

Oh good! We haven’t had fog yet on this trip! 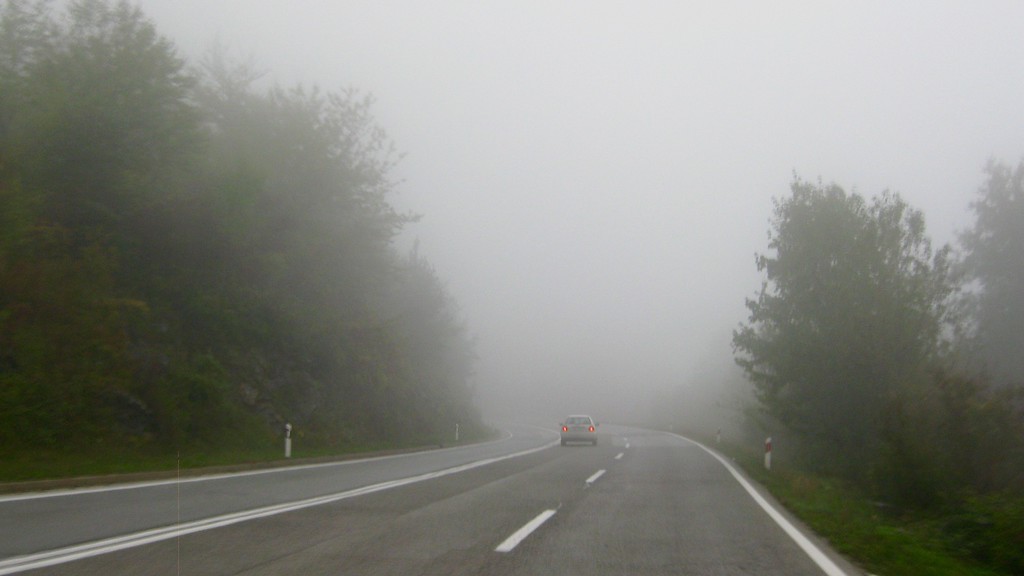 It was just starting to drizzle when we arrived at our lodgings in Jezera and we were all too happy to unload the bikes and get inside. But unfortunately, there was no where to eat nearby – we had to get on the bikes and ride five kilometers down the road in order to find a restaurant for dinner. The room I had rented was just outside of Plitvička National Park, and that’s where all of the restaurants were located. We hurried there, ate quickly and got back to our room just as it was getting dark. The dinner wasn’t anything special and cost more than it should have due to being inside the park borders, but at least it was a hot meal. Now we could kick back and relax and plan on what to do tomorrow. It all depended on the weather… 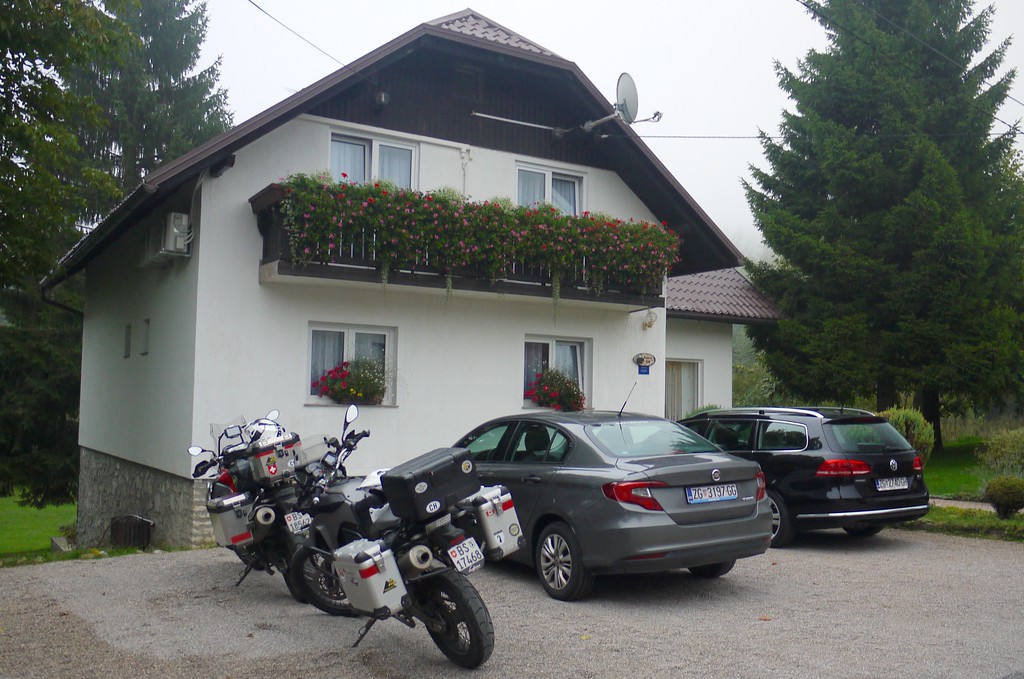