But this most recent holiday was different in a major way: I did not plan it. Other than our guided hike in Bhutan, I can’t remember the last time I went on a holiday where I did not research where we would go, what we would see, and where we would stay. For this trip, good friends of ours from the US suggested that we “meet in Spain” and take a holiday together. Then there was another drastic change to my normal holiday plans: there would be no motorcycle. Another departure from “normal” was that our friends (they have names, by the way: Aaron and Craig) were interested in making this trip focused on exploring the wineries, distilleries and cultural foods of Spain. Usually the “food” part of a trip isn’t even secondary.

The four of us had Skyped and shared some Google.docs in order to get input from everyone. Even so, my understanding of the trip was vague: I knew our route and that we would be stopping at a couple of specific points, but that was all that I was able to gather in my head. No matter: I was going somewhere new with Dan and good friends and I knew that a good time lay ahead of me.

Enough of the introduction – let’s get to the trip!

Dan and I flew to Madrid, where we would meet Aaron and Craig, who had completed their own trans-Atlantic flight just a couple of hours before. It had been years since we’d seen each other but we fell into our old friendship immediately. Our rental car was waiting for us – albeit at the wrong terminal – and after a brief wait we finally loaded our bags into our VW Tiguan and hit the road! 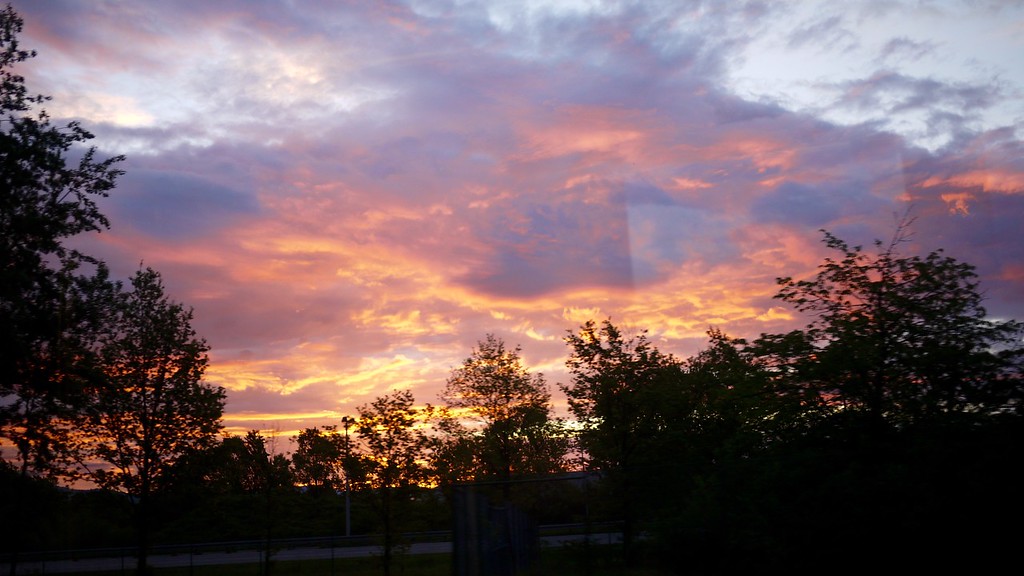 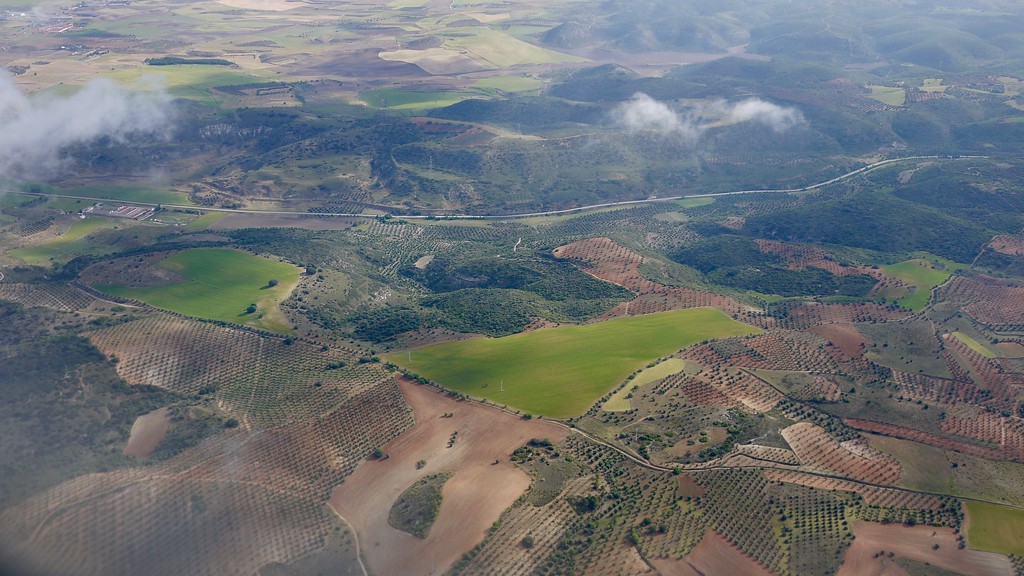 Our Chariot, a VW Tiguan (we didn’t like it)

It was quick work to leave Madrid behind. The countryside opened up and then we made our way over a small mountain pass. The countryside was lush and green – not the brown and dry landscape I had anticipated. And the temperature was perfect, ranging between 13 and 22C, with some low clouds and misty rain at one point. On the other side of the pass, and about three hours from Madrid, we stopped in the hilltop town of Haro in the municipality of La Rioja.

Aaron likes his wines and had done a lot of research into the wines of Spain. The La Rioja area is a well-known wine region so it was time to dive into tasting what the region had to offer.

Haro, first mentioned in the year 1040, boasts of many bodegas (wineries) and the Church of Santo Tomas. We parked the VW near the old center and started to explore the streets. The guys were interested in finding a place to have their first Spanish wine in a Spanish town, but I was more interested in exploring the town. We compromised and did a short exploration before stopping for a glass of wine. 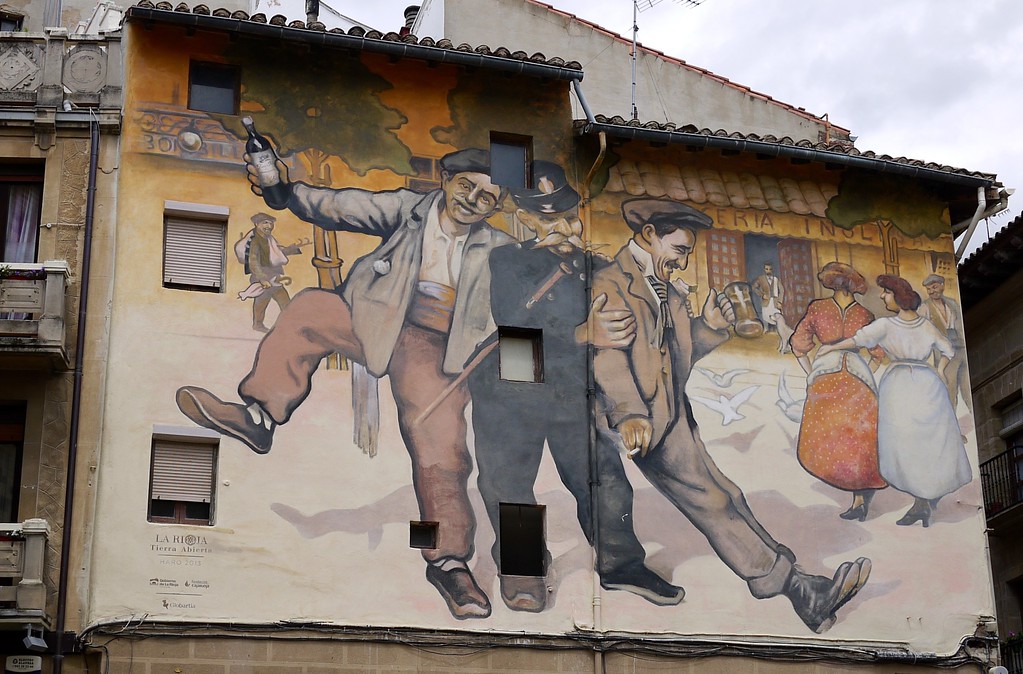 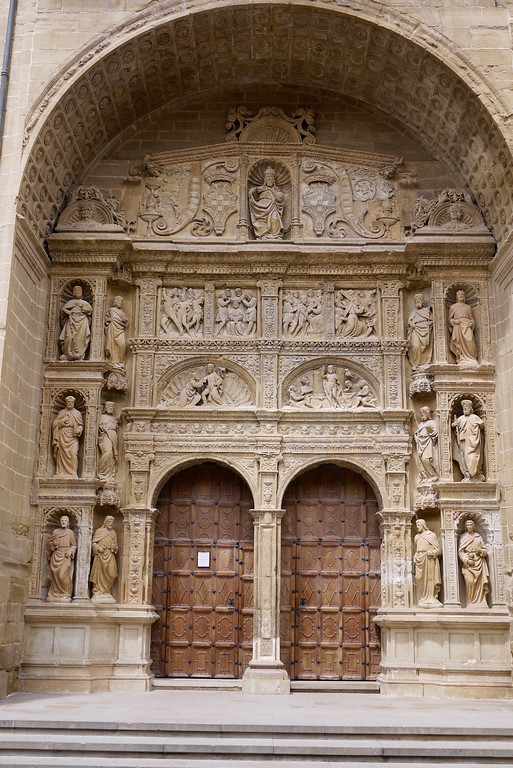 I wish I had seen the inside of Santo Tomas. After I got home I looked up some of the photos of the interior: absolutely stunning! Easily one of the most beautifully decorated churches I have (haven’t?) seen.

Our next stop was to find a place that sold wine. I don’t know the criteria that the guys had for picking and choosing, but we passed by a couple of places before they made their decision. Inside we went!

After having a glass of one of the local wines, it was time to see where they were made. We meandered back to the car and drove across the river to a winery that Aaron had researched. Almost no one was there (a benefit of being ahead of the high season) and ours was only the second car in the parking lot. The winery looked old, but the tasting room was a strange modern construction that easily set itself apart from the rest of the buildings on the property.

The tasting room, on the right 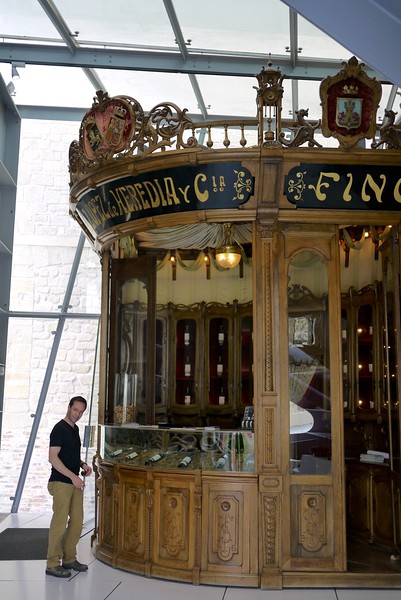 We took a seat across from a couple who were just finishing up their own tasting. They were a friendly Canadian pair and almost immediately struck up a conversation with us. It had been so long since I had run into North Americans in Europe that I felt completely taken aback by their friendliness and openness.

The tastings we experienced on this trip were the first ones I had ever been to, but apparently they were typical. There was extensive information about what is in the glass: the types of grapes, how they are aged, what they are aged in, when they move from barrel to bottle… I don’t know how anyone can keep track of such things when sipping a glass of wine.

After trying the three wines offered, the guys deemed two of them “good” and bottles were bought. We then wandered across the street to another winery and repeated the process. 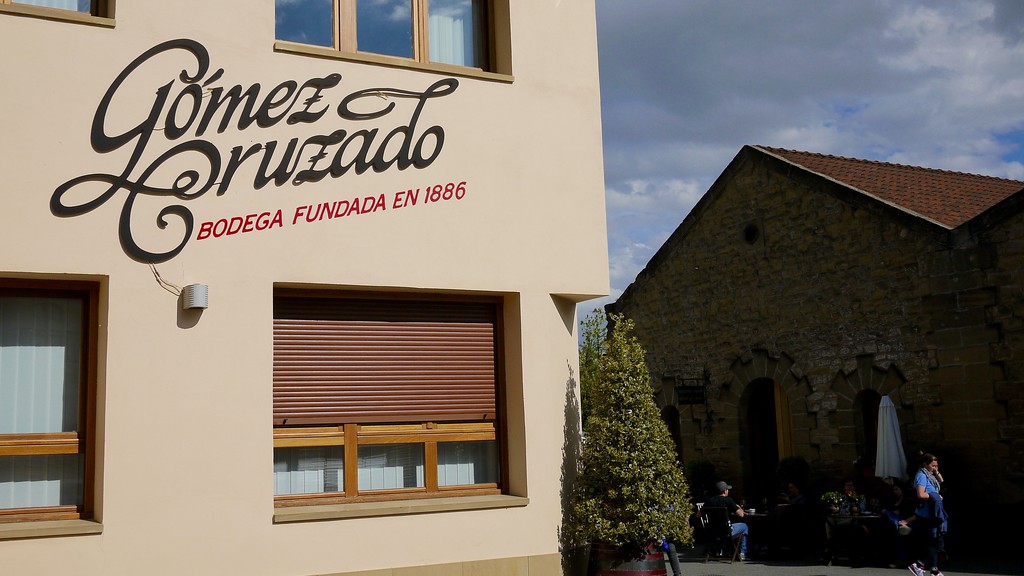 Clearly they were fascinated 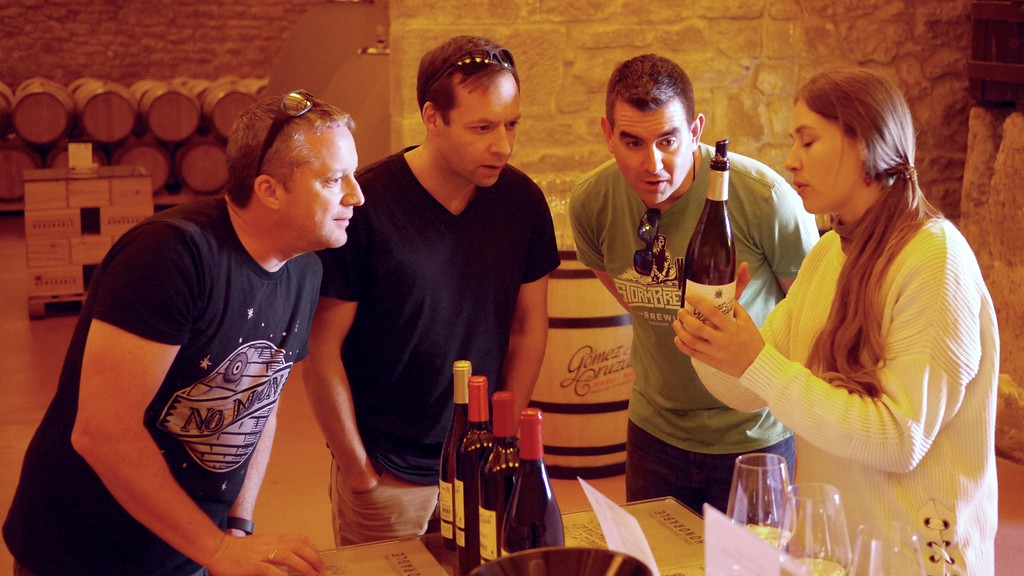 Wine production requires a lot of time – and space

Aaron had reserved an apartment in San Sebastian, another hour and a half drive in front of us. We packed our newly acquired bottles of wine into the already stuffed rear compartment of the VW and we piled into the car. As I don’t care to drink, and I love to drive, I was nominated as the designated driver. This worked out well for everyone: they could taste to their hearts’ content, and I could get us safely to the next destination.

San Sebastian. You can look at it on GoogleEarth and see photos posted online, but none of that can really give you an idea of the beauty of the city and its location on the coast of the Atlantic. The Pyrenees meet the Cantabrian mountains to make a dramatic, forested backdrop behind the city’s vibrant neighborhoods, and the Atlantic ocean laps gently at the wide beach tucked into La Concha, a wide sheltered bay.

On the street level there is a sense of liveliness and fun. Everywhere were people walking, running, gathering in groups along the shore and on the narrow streets. It had a good vibe to it.

The entrance to our apartment for the next two nights 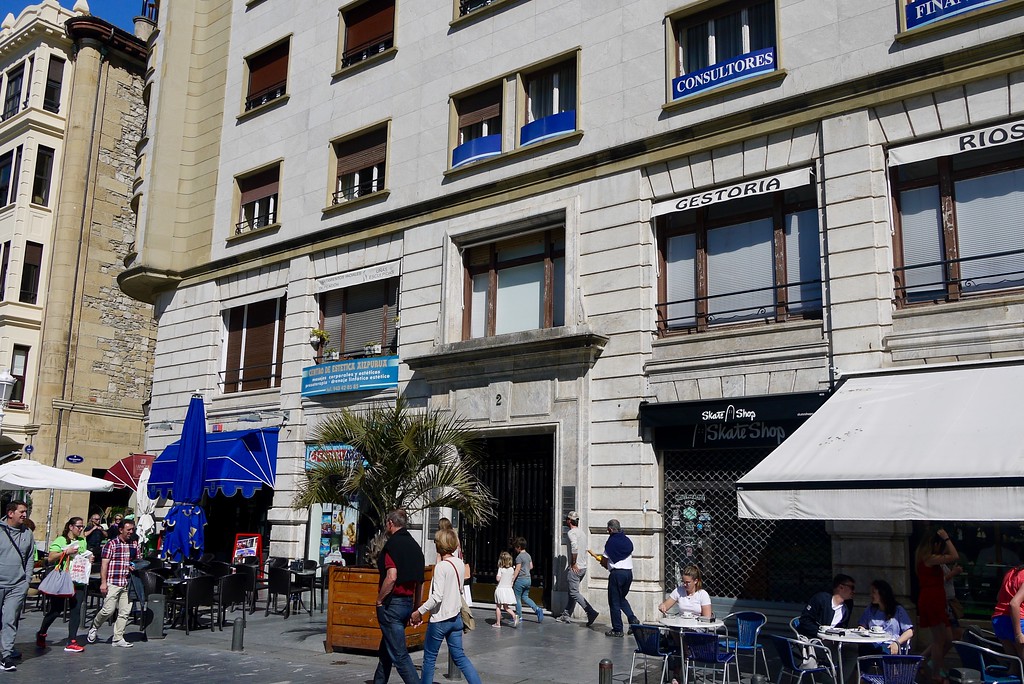 The views from our apartment

This region is known for its Pintxos (tapas) and I was about to find out just what this meant. By the time we had arrived, parked and unloaded the car, and got ready to go back out, it was getting dark and the streets were filling up.

Santa Maria Eliza church at the end of the street 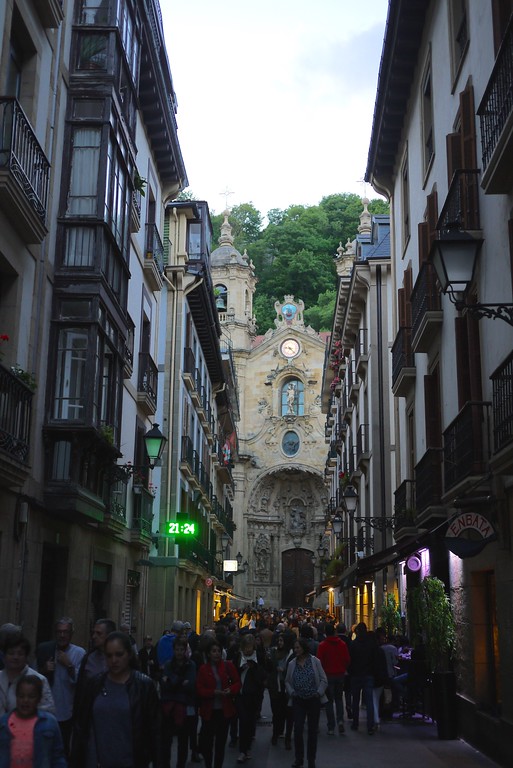 One of many Pintxos bars

The pintxos bars were packed and it was hard to see what all of the fuss was about. But then we started to go inside and I could see the appeal: the entire bar was covered in plates of food. There are various methods to picking and paying for what you want, but for us, it was easiest to pick up an empty plate and start piling food on it. The bartender then gave your plate a quick glance and told you how much to pay.

The whole experience was incredible and is impossible for me to convey here. So many people, so much food, so much activity! Of course they won’t do the situation justice, but here are some pictures that that I took the first night: 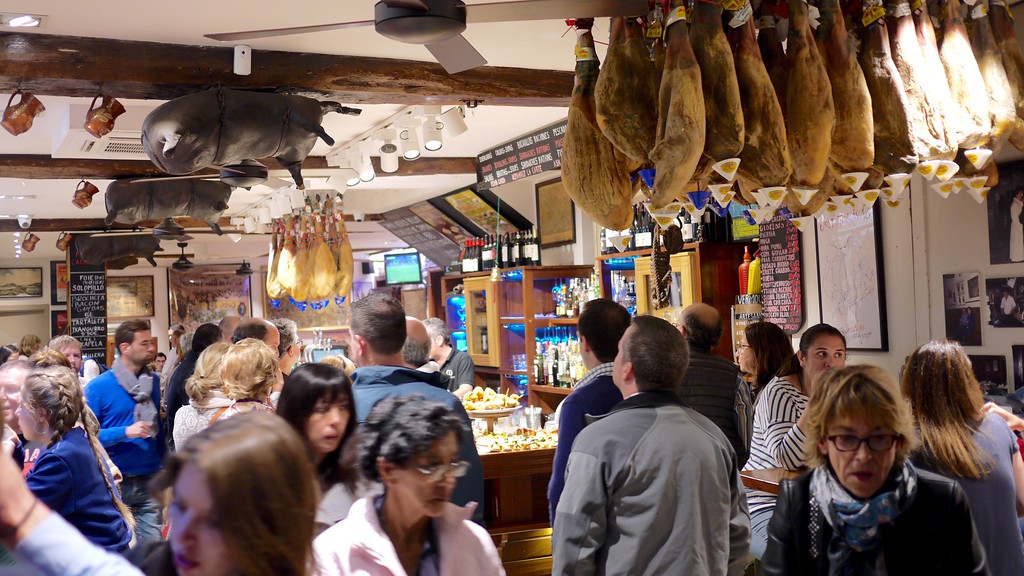 It was often frustrating because the bars were so crowded. I had to push my way up to the food just to see what was offered, and often not having much idea of what it was anyway, even after I could see it. I have been working on my “adventurous eating” over the past years and this was another chance to practice. I often took bits and pieces, not really knowing what they were but figuring that I ought to give them a try. For the most part I liked what I chose, and anything I didn’t like easily found a spot on Dan’s plate. The guys studied the wine bottles on display and made their choices. We would eat a few pintxos, drink a glass and then move on to the next bar. It was a late evening and I admit that I was getting grumpy by the time we hit the last pintxos bar. It was times like this that I wished that I liked the taste of alcohol and could join the guys with their tasting and drinking.

Eventually we moved away from the narrow, crowded streets and headed to the beach. The weather was fantastic and it was nice to finally not be constantly dodging people.

Lights across the bay 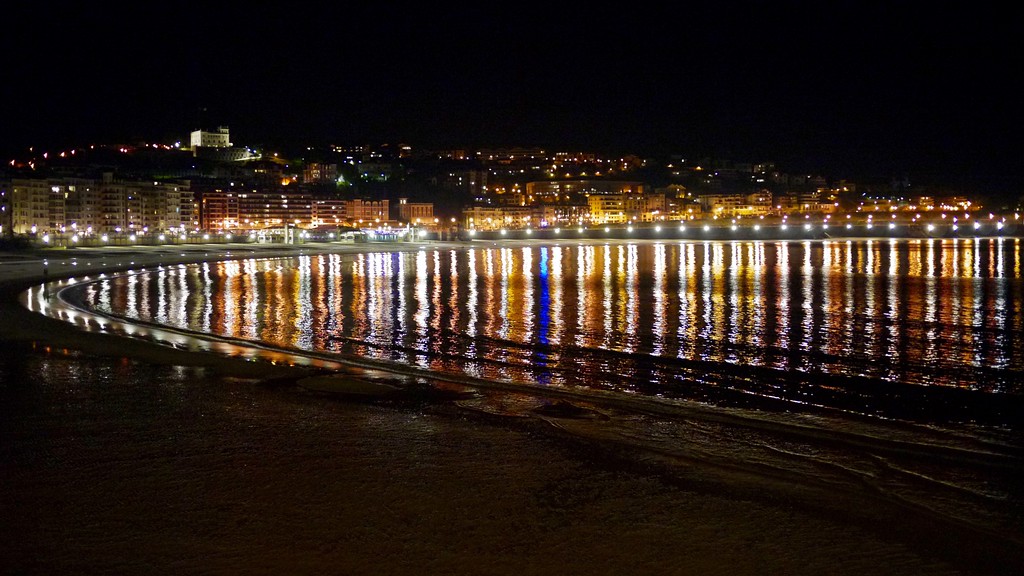 Looking back at the Town Hall 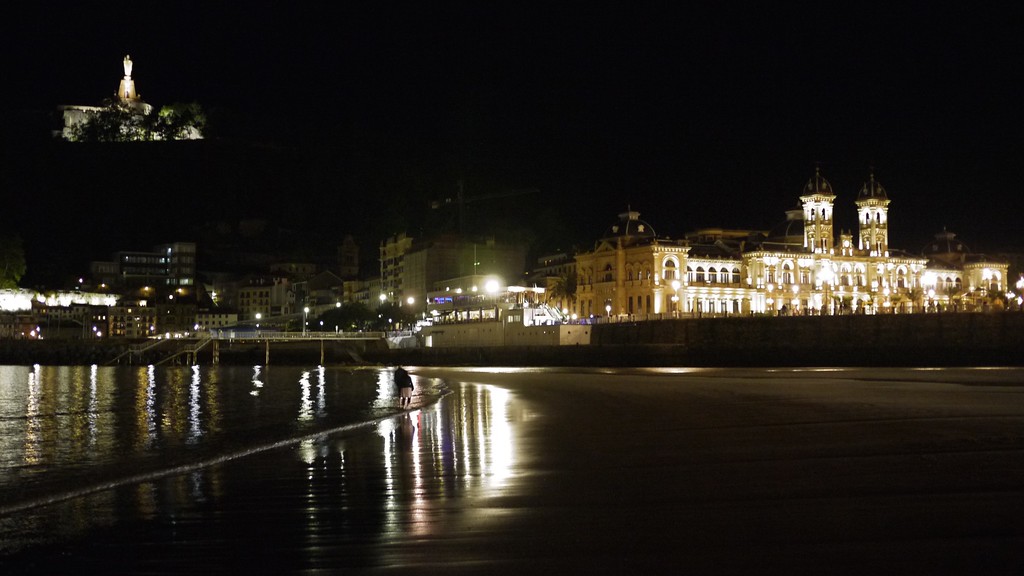 As would be the case for the rest of the trip, we had “dinner” around 10pm and got to bed well after midnight. The late Spanish lifestyle is not a myth!