I woke up to sunshine streaming in the window and stepped out onto the front terrace to enjoy the view. It was still beautiful.

Today was another day of drinking! Despite the rising temperatures (and the sun a blazing ball of fire beating down on my fair skin), we decided to walk down to the river front and visit a winery or two and see what else there was to amuse ourselves with. 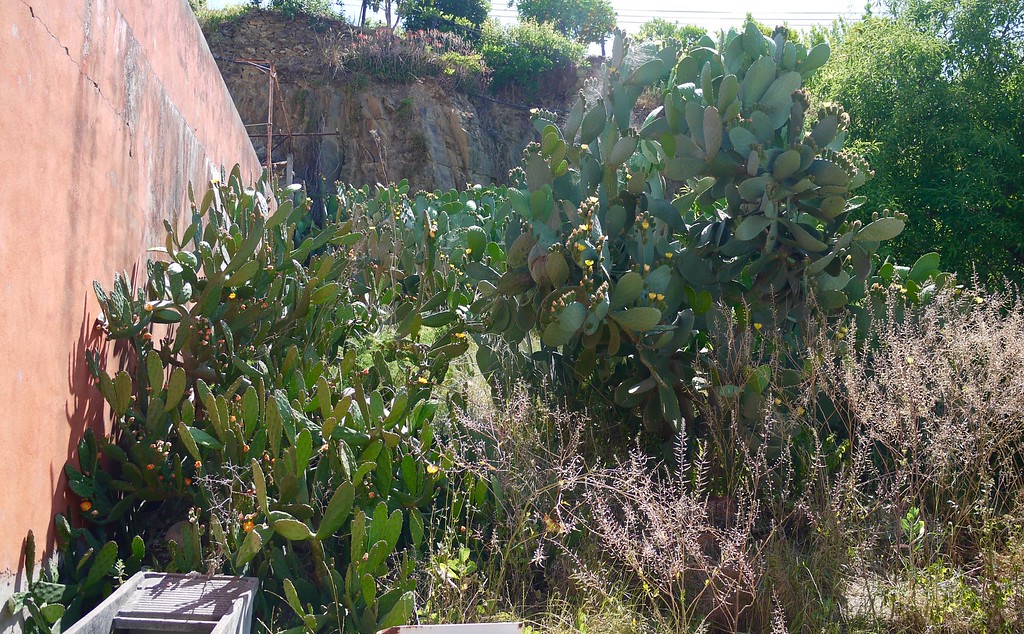 While Pinhão gave the impression of a sleepy little town, river cruise boats plied the waters almost continuously and the train stops six times a day. I could imagine tourists pouring into the streets and filling the gift shops that lined the tiny main street. Fortunately for us, it was still early in the season and the tourists weren’t so thick. Plus, we tended to explore the back streets where the tourists don’t go. Eventually we found a bakery of sorts and stopped in to get a little something to eat before starting our day. It wasn’t anything exciting, but it was tasty and just enough to satisfy our breakfast needs.

Pinhão was serious about building upon its winery heritage and its place as a key stopping point for tourists. I saw evidence of recent improvements, including a boardwalk along the tributary river that flows into the Douro. In the morning we had made our way down some rather sketchy stone steps cantilevered out of a wall, but by the time we returned in the evening, real steps had been in place. Fast workers! 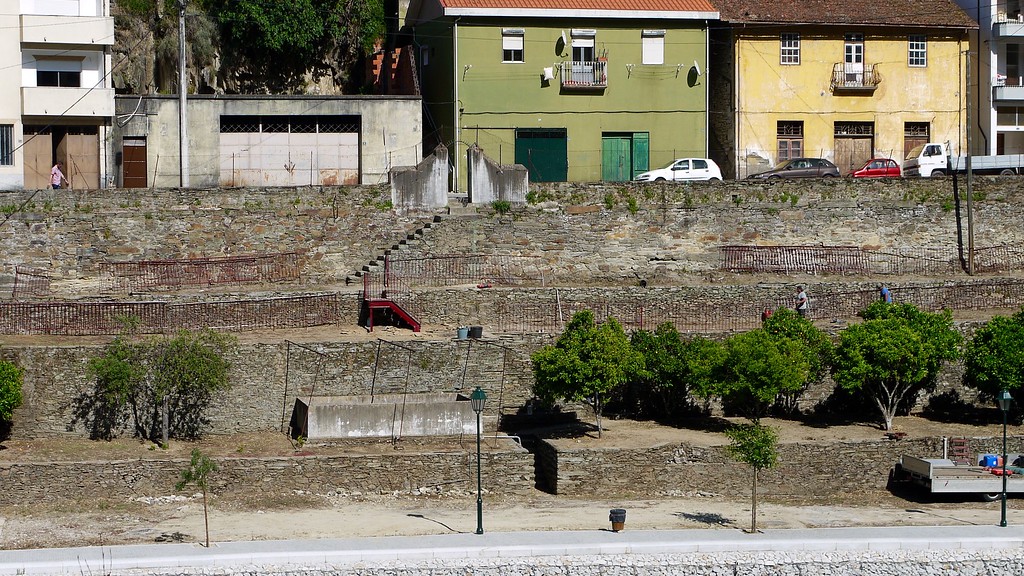 New development along the river 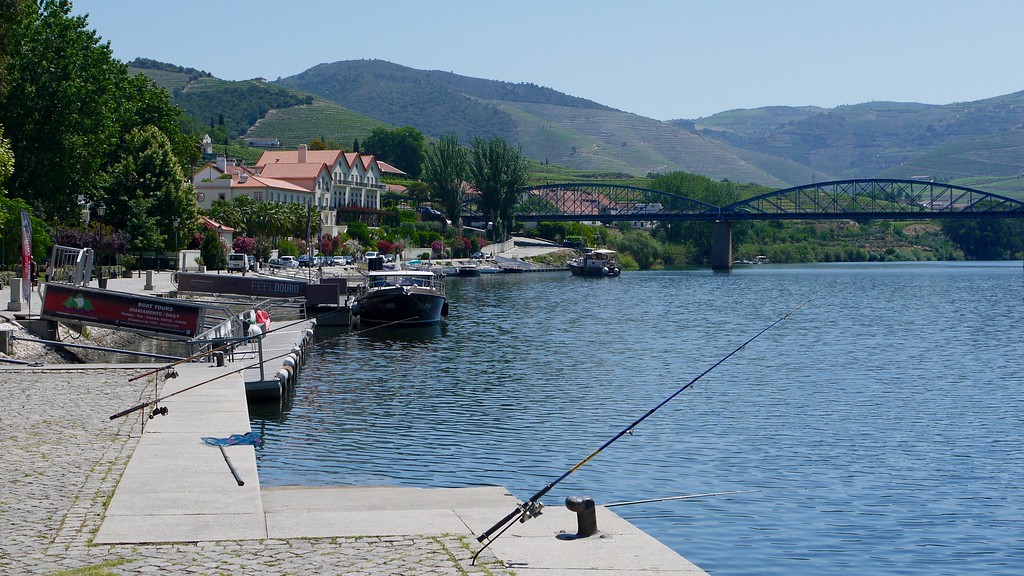 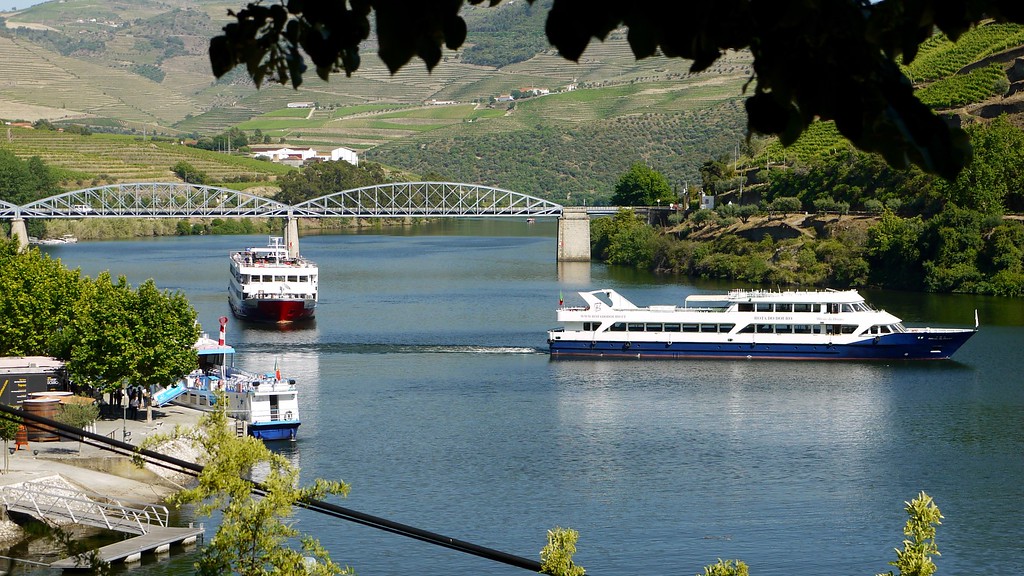 We wandered across the metal truss bridge that spanned the Douro and visited our first winery of the day, Quinta das Carvalhas. It was a short and pleasant walk, and the large display room was empty, save for an employee or two who bustled their way around the area. It wasn’t long before the hostess politely offered us a tasting. We opted to sit outside, as the sun was beating on the back of the building, creating a shaded place to sit and enjoy the river views.

As the guys were enjoying their Douro Valley wine tasting, a tour bus pulled into the parking lot and disgorged its load of retired people. They were a friendly group and the tour guide stopped to chat with us for a while. As we talked, members of her group would wander back out to where we sat, asking where the toilets were. Since access to the toilets was outside, around the corner and up a set of stairs, it was worthwhile to give directions. I had seen the bus coming and already made the trip – good thing, too: more and more of the guests came out asking for directions and the line-up got longer and longer. It made for an amusing few minutes and laughs were shared.

Printing plates inside the tasting room 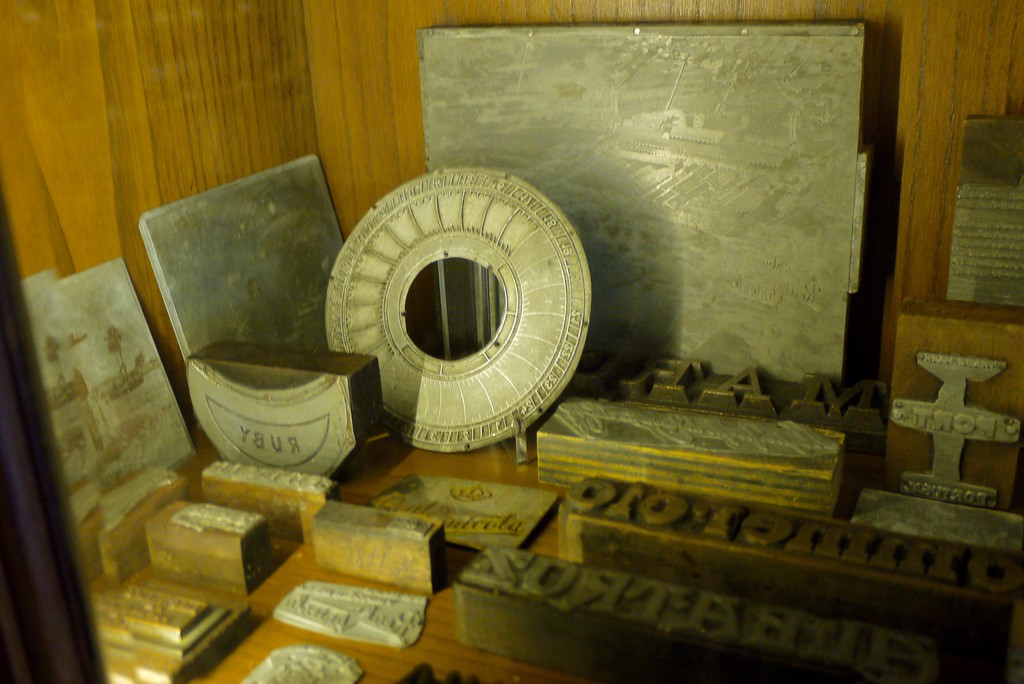 The tasting was over and the hostess was pleased to clear off the tables that we had been using. We wandered back out into the sunshine, recrossed the bridge and headed for another winery. Quinta do Bomfim was closer to the center of town and had a nice (small) museum area next to the store. We were the only ones in the tasting room, choosing to sit inside in the air conditioned coolness instead of enjoying the hot air of the outside seating.

Even after all of this time, the tastings were taken seriously by the guys. They picked up the glass, swirled it around, inhaled the “bouquet” and let the liquid swish around over their tastebuds (and whatever else wine affectionados do with their wine). Aaron was the most serious in the group, and I think that Dan was just having fun with it. A small bread and cheese plate was provided and we relaxed for a while in the comfortable air. We didn’t really have any other plans for the rest of the day and it was barely noon.

The back of our Teepee was getting full and it was decided not to add to it at Quinta do Bomfim. I checked out some of the historic images posted on the wall and tried to make sense of them, as the descriptions were all in Spanish. I did learn that the unique boats I saw in Porto (and again here in Pinhão) were called “Rabelo” and were the traditional cargo boats used to ship the barrels of Port wine down the river to be stored and shipped elsewhere. Unique to the Douro River, these boats are no longer needed to ship cargo, as the rail has taken over that need, but now they move tourists from place to place. They are beautiful to look at and I am glad that they found a new purpose in life. Other photos showed me the effects of massive flooding in years gone by, and saw how the harvesters wore large baskets on their backs while picking the grapes. It wasn’t much different than other vineyards but I still enjoyed seeing the photos.

Leaving the winery behind, we wandered down the main street of Pinhão thinking about our lunch options. So far on this trip we had really focused on high-end cuisine but now it was time to go in the other direction. There isn’t a lot of choice in Pinhão, and with two nights to explore the two main restaurants there wasn’t a lot left to chose from. As we went past the gift shops we saw a little sandwich shop. It was simple and unassuming and perfect. We went in, took a seat and looked at the simple menu. Our choices were limited to some basic sandwiches, but that was good enough for us.

The food was good. Small servings, which was a relief, and simple ingredients. The food came out quickly and we had eaten our portions in no time at all. It was time to go back into the sunshine and find another winery!

We left the restaurant and walked to the other end of town, where we had started our day at the river front. This time we crossed the bridge and meandered down the road to the Quinta da Foz. Even now I have to chuckle when I read that name, as all I can think of is the Fonz. As we entered the tiny shop the proprietor was already occupied with a group. As the place was small, he asked if we would mind waiting outside for twenty or thirty minutes. There was a nice garden and pool around the back of the building – and plenty of shade. 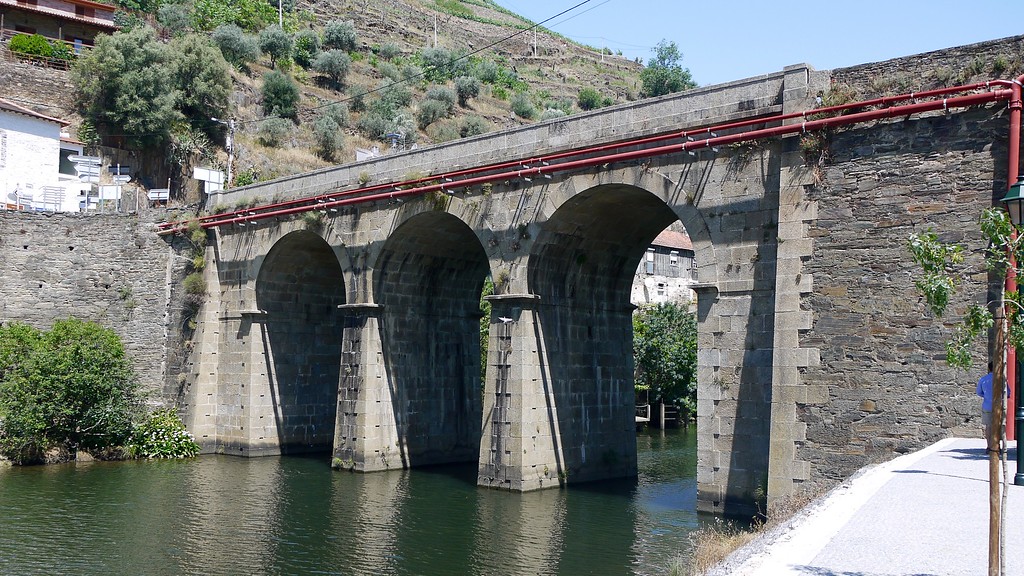 Behind the Quinta da Foz 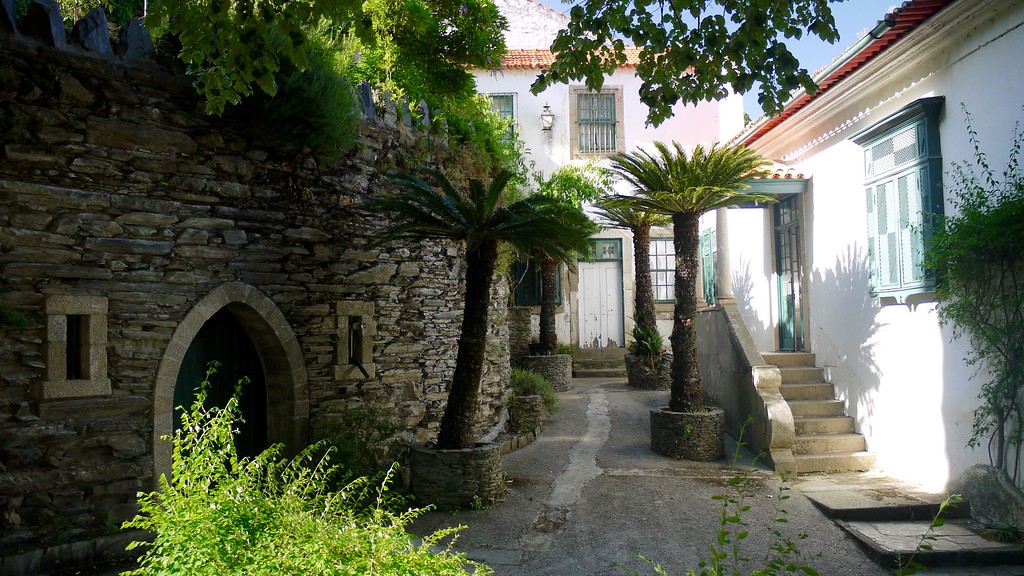 Once the tasting room was clear it was our turn. The proprietor invited us in and immediately gave us a tour. This was the first tour we’ve had since our time at Abadía da Cova and I found it much more interesting. The setting was more historic and the processes much more traditional. For instance, there are still grapes that are stomped by human feet. These stone basins are used every fall to produce some of the wines that come out of Quinta da Foz. Our guide was very friendly and informative, taking us through the process of wine production and finally bringing us into the tasting room. The guys found wines that they liked and we hauled a few more bottles back to our apartment with us.

A new type of foot bath

Massive wooden vats (I should have used “Dan for Scale”) 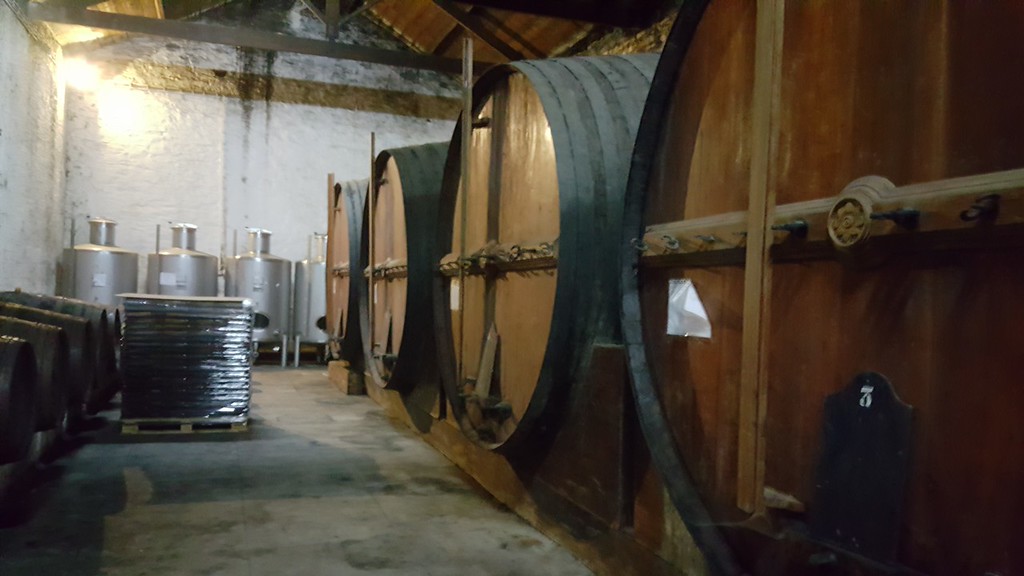 We finally retreated back up the hill to our apartment for some rest and relaxation. This is when we found out the the pool that was advertised wasn’t quite as clean or warm as we had expected, the game room had morphed into a dusty storage room, and the air conditioning that had been listed didn’t exist. Despite all of this, it was still a comfortable place to kick back and relax.

Unfortunately, there was not much relaxing to be found. We had not arranged for a place to stay the next night – our last night in Spain. We had decided to stay relatively close to the airport, so that we were in place to best make our flights home. But as we frantically searched AirBnB and other online sites we found that the nearest rooms and hotels were booked. We expanded our search in an ever-increasing radius, finally finding a place that fit our needs. We could now continue to enjoy our last evening in Portugal. This included a drive back down to the water front for dinner – and it was a fantastic dinner at Veladouro. We were early and had to wait outside, and then once we were seated inside, it was another short wait before the kitchen staff was prepared to make our meal. I had a steak, of course, especially now that we were far enough away from the coast for me to justify it.