Our last full day in the Iberian Peninsula!

We hit the road and almost immediately looked for a post office. Aaron had been researching Portuguese road tolls and learned that we should have been paying them all along. Apparently we missed a sign when entering the country asking us to stop and pick up a transponder – we think. But since we hadn’t gotten the message, we’d been driving merrily around the country and not paying our fair share. And, of course, we didn’t want a surprise bill after our holiday was over, so it was a search to pay now, before we crossed the border back into Spain.

But first we had to get out of wine country! And because it was morning, Craig was driving and I could try to take photos from the back seat without getting motion sick. I did ok on both accounts, I think. 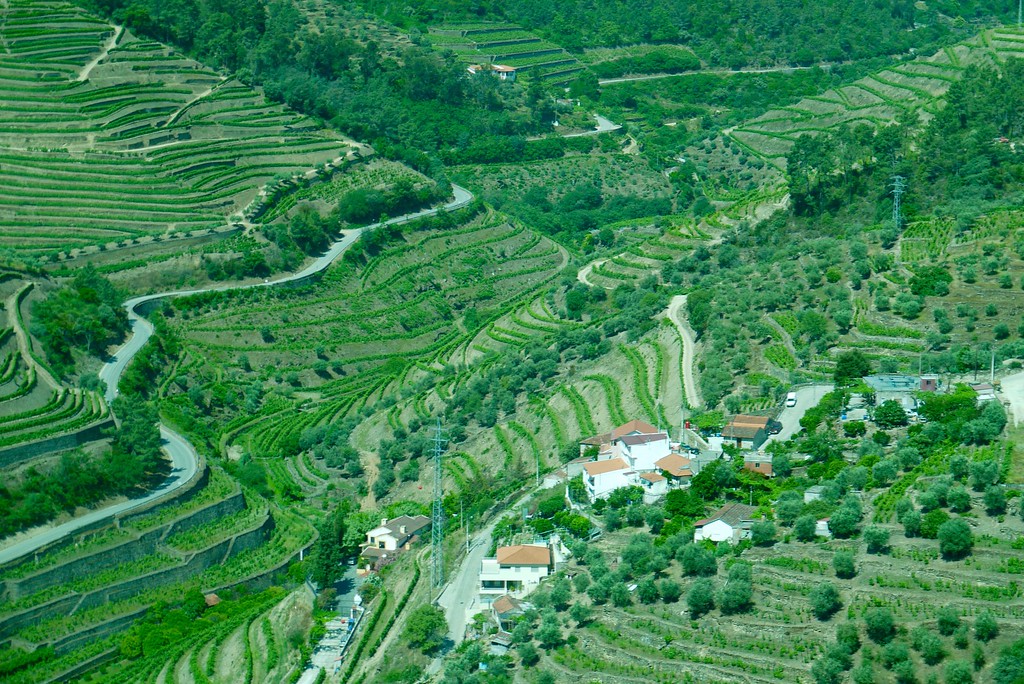 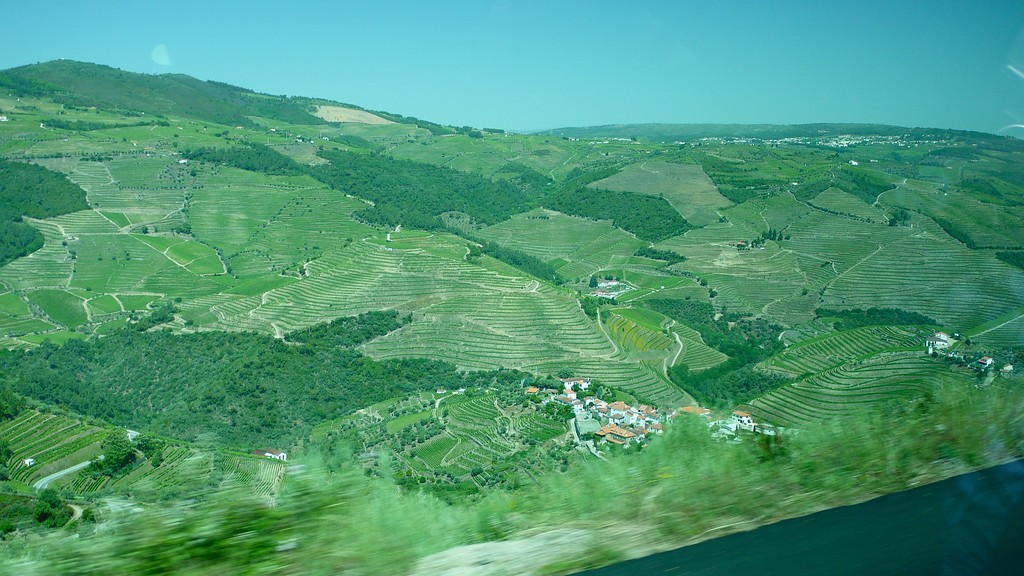 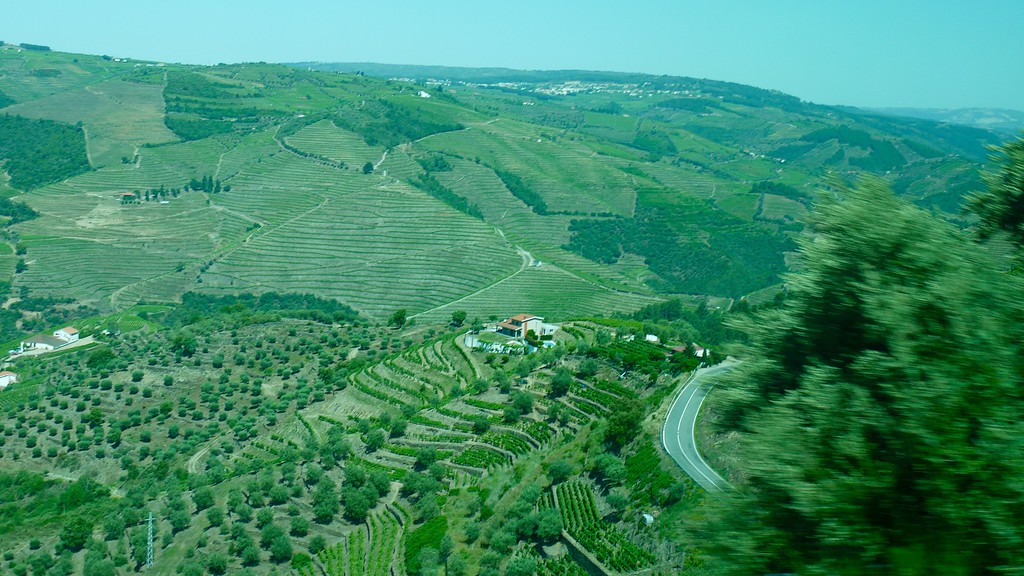 And eventually we moved into olive country… 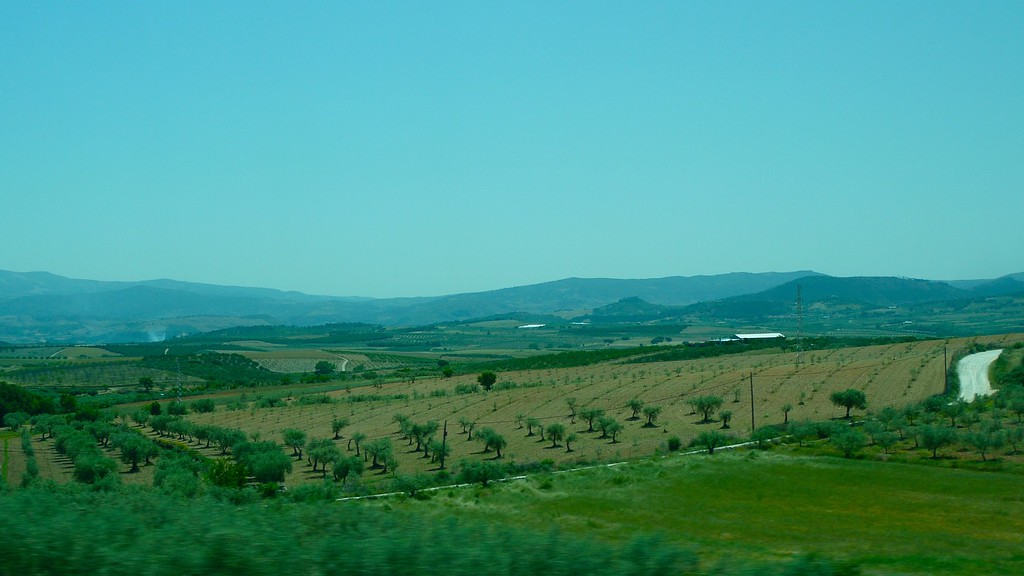 Monoculture at its finest 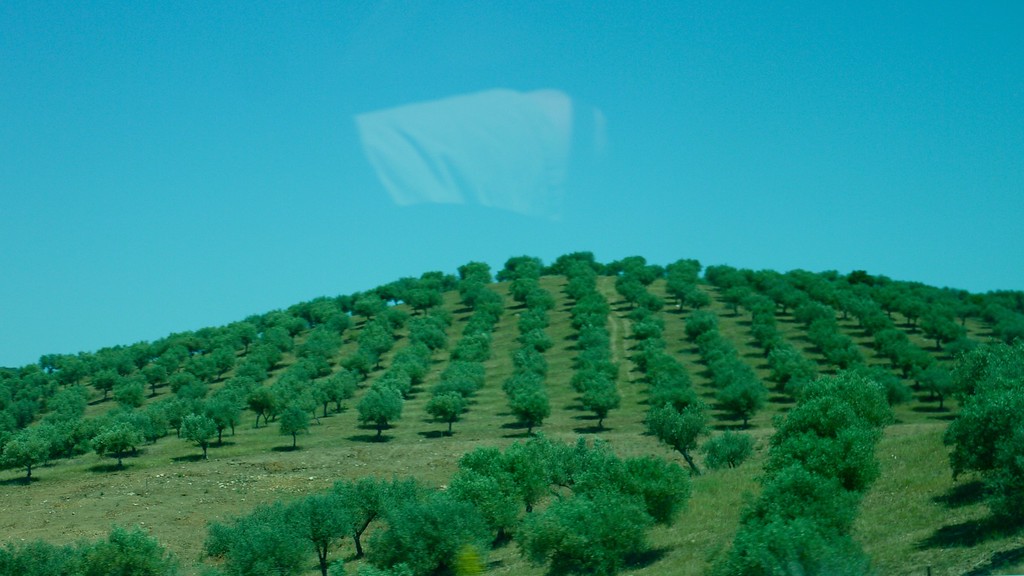 The town we stopped in for the toll payment information was also convenient for a lunch stop as well. 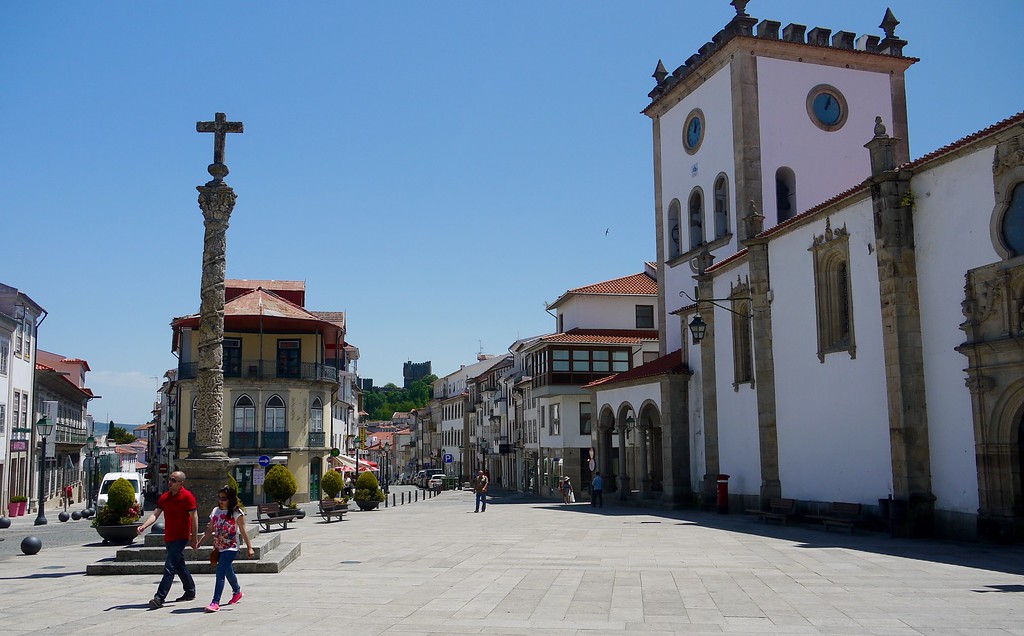 Is that a castle on the hill? 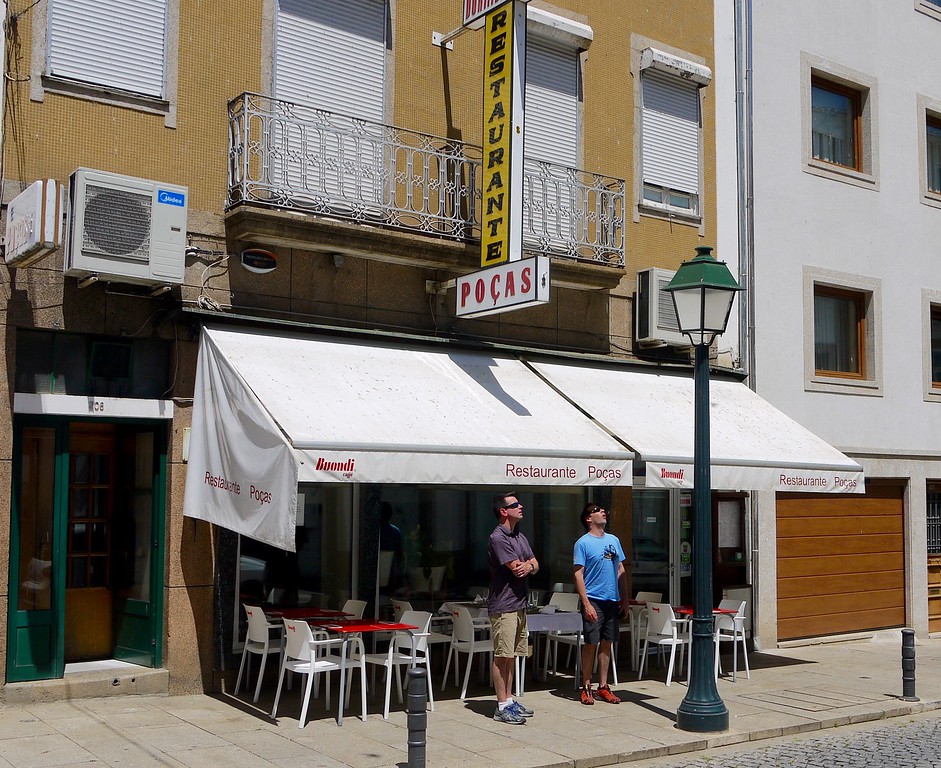 The lunch was way too much food, but it was so good that we felt compelled to eat it all anyway. The day had gotten hot already and we hid in the shade of the awning as cars and buses lumbered up and down the narrow street. It was a good stop, despite the heat and noise.

After the toll payment riddle had been solved, we agreed that the castle on the hill deserved a closer look. I drove up to its gates and parked in the shade, only to find out later that it is perfectly acceptable to drive into the castle grounds itself and use the large parking lot made just for that purpose.

The view of Braganca Castle from within its walls was impressive, although it is hard to get a sense of scale when you’re inside it. I found this photo online that gives one a much better idea of this walled citadel and how it is perched high above the surrounding landscape

This is what we saw:

Once inside the gate it was as though I had entered an historic living village. The buildings were actual homes and businesses and I could tell that the residents really lived there. The streets were quiet today and I poked my head over walls and down alleys and into open (public) buildings. The church stood prominently next to the parking area with its doors wide open to invite passers-by to stop in for a visit.

The Church of Santa Maria 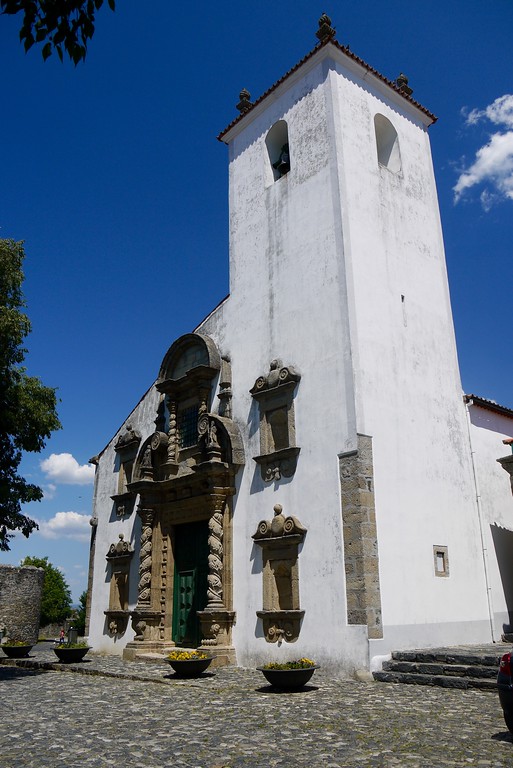 A section of the wall

View from the wall 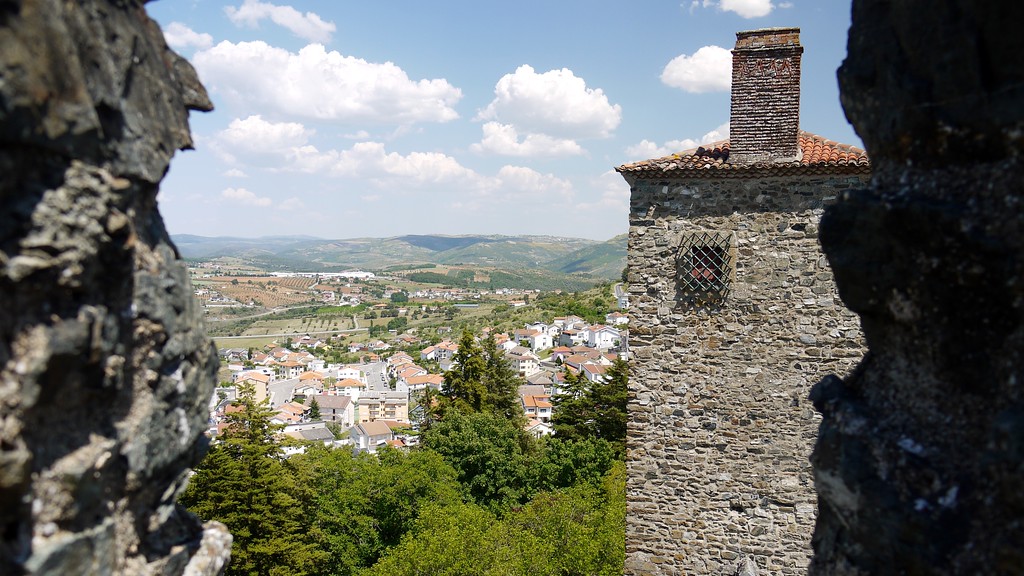 The main tower (or keep) sits squat and forlorn in the middle of an open space. It actually reminded me of what a building would look like if 2/3rds of it had sunk into the ground. For a small fee, one could visit the museum inside the tower. It was worth the small fee, as regardless of the items on display, the interior of the museum itself felt very authentic. The steps were of uneven stone, the railings were less-than-optimal, the spaces were crowded and the doorways low. It was easy for me to imagine a guard running up the steps and into a small room in preparation of defense of the structure. 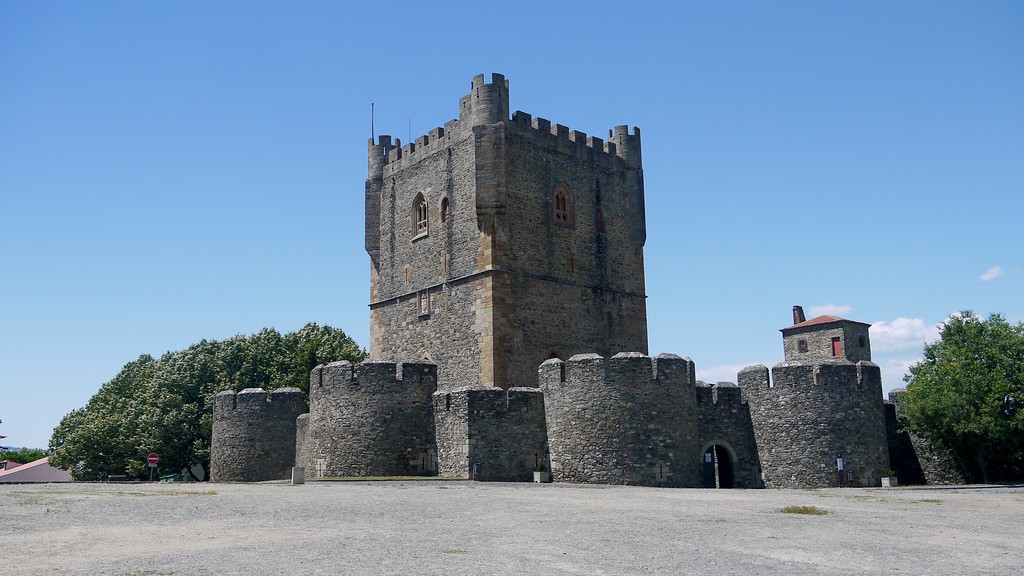 One photo, before I noticed the “no photos” sign 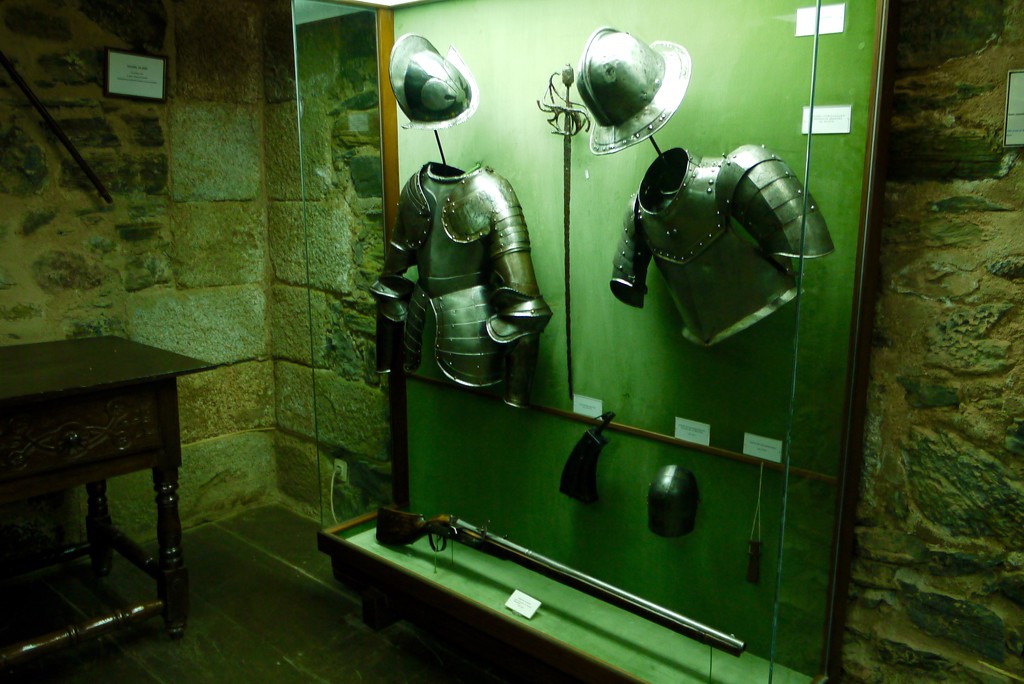 There was even access to the roof of the keep, via a very steep and narrow ladder. It was definitely a one-person-at-a-time affair and I looked up before starting, to make sure that no one was coming down. Thank goodness we were still early in the season and the crowds were thin!

View of the town from the top of the keep

Buildings within the castle walls

And there ended the excitement of the day. We piled into the car once again and drove east until we were just shy of Madrid. The landscape was rural for most of the way, and the road was not terribly fast. I was intrigued by one area that had stone walls criss-crossing the landscape, reminding me very much of Scottland

And further on, we saw signage that indicated that there were roadworks ahead. If you are familiar with the US system of putting up orange barrels and concrete jersey barriers every time there are “road works”, you can imagine my surprise when this was all of the protection that the workers had 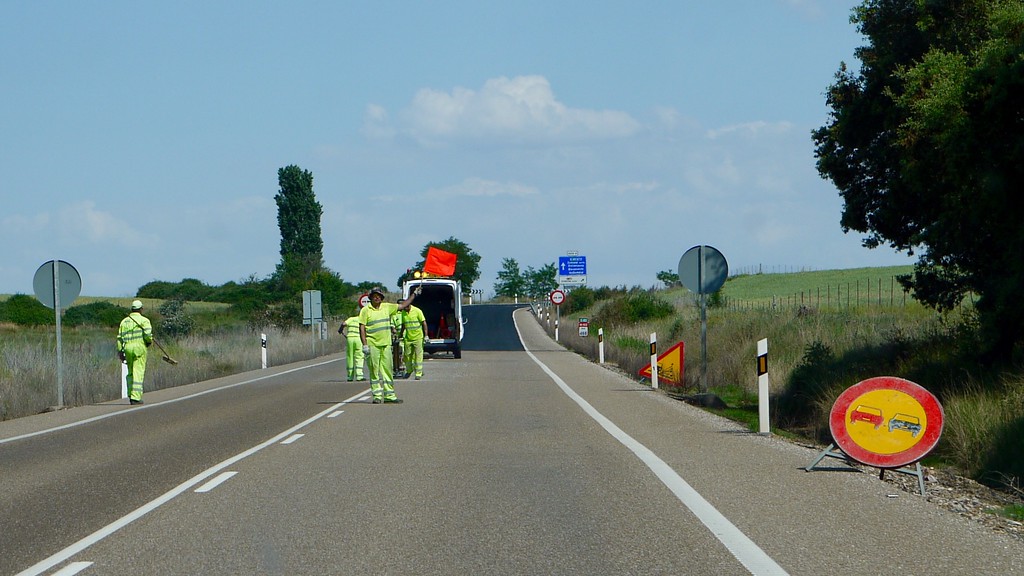 I also amused myself with the road signs: picnic table or toilet? 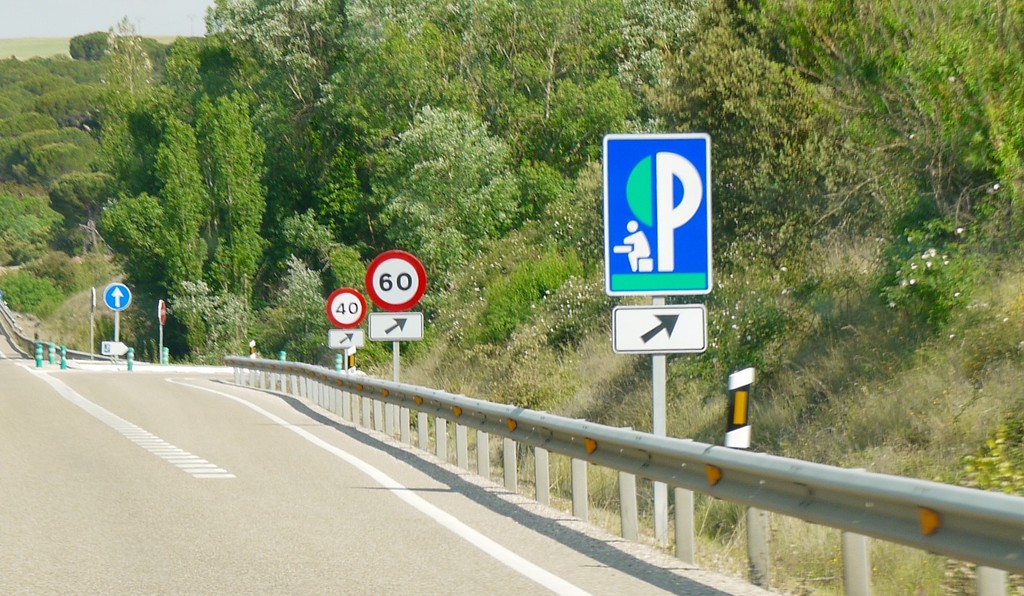 We had booked at Hotel Eurostars Madrid Tower, which was surprisingly affordable considering the fancy aspects of the hotel. It was late by the time we got checked in and settled in our rooms. We went down to see if the kitchen was still open and it was – but barely. We sat in a small, impersonal cafeteria and gave the friendly waiter our order. As we sat there waiting for our food we looked around. The other people in the room were obviously traveling for business. Everyone sat along at their own table, either staring with blank expressions or immersed in their cell phone or table. There was no noise, save the occasional clink of cutlery or the scrape of a chair on the floor. We all agreed that it would be much more comfortable to eat in our rooms. We asked the waiter to arrange for us to take our meals with us and then relaxed in the comfort of our own couches and opened a bottle of wine.

The next morning we packed up the Teepee for the last time. Traffic was better than we expected and the drive the airport went quickly. Aaron and Craig’s flight left before ours, so we saw them off at their gate (or at least as close as we could get) before meandering around the airport while waiting for our own flight. The Madrid Airport is huge and very nicely designed. The time passed quickly and it was not long before we were back in Basel.

Our suitcase was heavy