Not surprisingly, it was another late start to the morning. Dan and I had gotten up and were ready to see more of the town, but Craig wasn’t ready to be seen in public yet. Aaron had come out just to get Craig some coffee, but decided to join us on our morning exploratory walk.

During the drive into Ourense yesterday I noticed a tall stone bridge with beautiful arches. I wanted to see it up close so we headed downhill, towards the river and in the general direction of where the bridge was. When we were near the stone bridge (which turned out to be the Ourense Viaduct over the Minho river), we found that there were more bridges to be discovered. In the shadow of the trestle was a standard road bridge, which we decided to cross. As we reached the center of the span three more bridges became visible downstream. This called for some investigation!

Ourense Viaduct above and Rúa M. Curros Enríquez in front 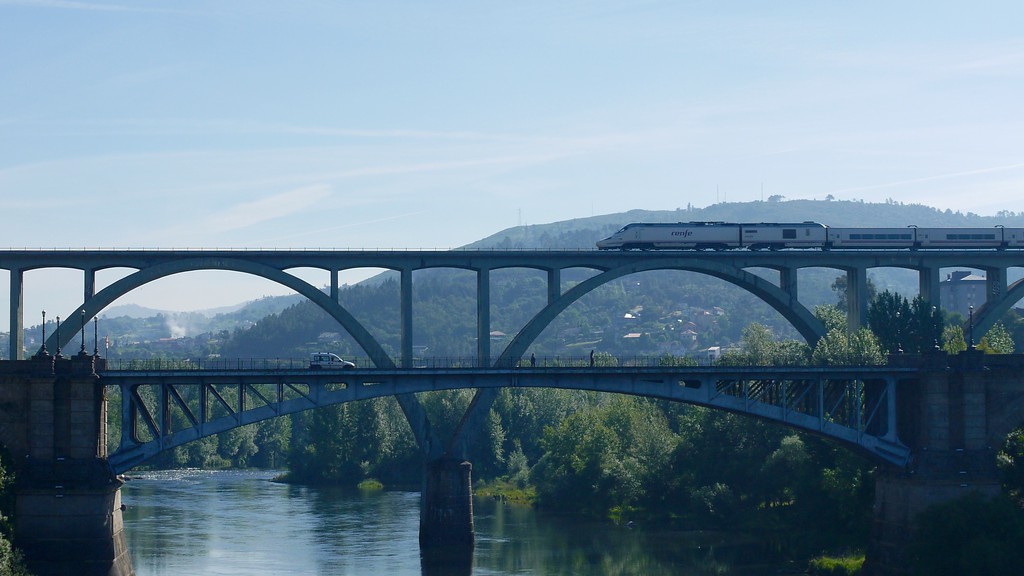 Another shot, showing the pedestrian bridge as well 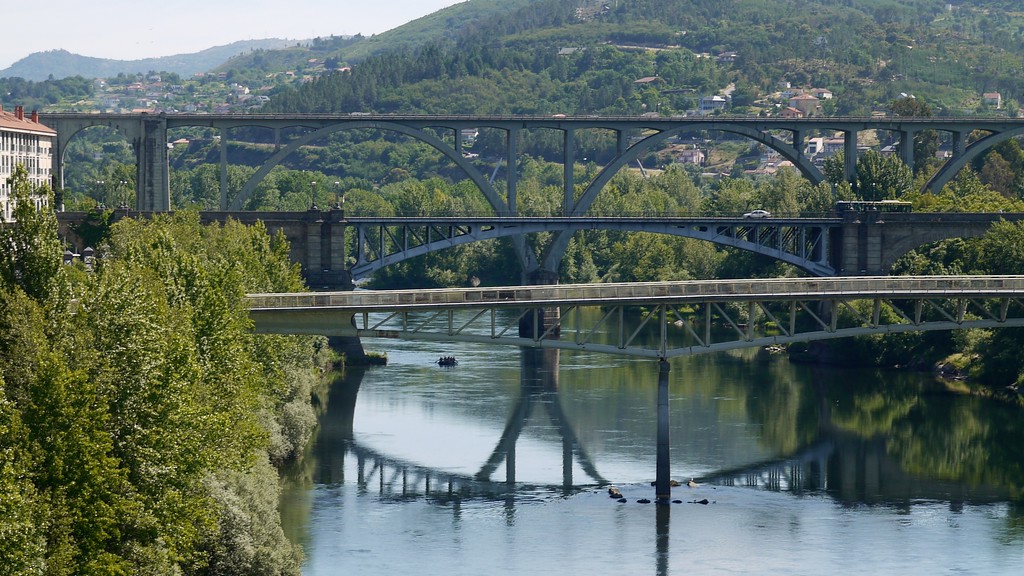 We completed our walk across the river and downstream to the next bridge. It was a modern pedestrian bridge that gave a great view of the next bridge in line: an ancient Roman bridge. Ok, it was only fair to return and pick up Craig before investigating any further. We headed back up the hill to our hotel, with Aaron stopping along the way to get the promised cup of coffee.

We packed up our things and dragged our belongings to our car, which was parked like a sardine in a can in an underground lot. It was getting more and more difficult to carry everything in one go, as our wine bottle collection grew almost daily. But the Teepee (that is still a stupid name) held our stuff easily and our Tetris skills were good. Now that everything was packed in the car we made our return to the river and the bridges – this time with Craig.

It turned out that there wasn’t a lot to return for. We again visited the old Roman bridge, where it turned out the only thing left from the Romans were the foundations. Ok, so I borrowed a lot of the following text from Wiki, but I tried to edit out the unimportant bits. The original bridge across the Minho River was built during the first century rule of Emperor Augustus. From the Middle Ages, it provided access to the city of Ourense for trade and pilgrimage. The structure was rebuilt in 1230 by Bishop Lorenzo on Roman foundations (original piers) and repaired in 1449 by Bishop Pedro de Silva. It then measured 1,319 feet long, with an arch span of 156 feet. However, the main arch collapsed in 1499 and the bridge was rebuilt in 1679 to a length of 1,210 ft with seven arched spans, the main span measuring only 141 ft. It bothered me that the arches were not of the same style across the full length of the bridge. Who let that get through the design phase?

Beyond the Roman bridge was a fun modern bridge. The way it was designed made it look like there were stairs that twisted around, over and along the span of the bridge. Who knows, maybe it did!

As we were speculating about the full function of the new bridge I noticed two military men on the shore of the river below us. One of them held a small standard camera and the other had a large video camera in his hands. They were scrambling along the sunny bank and kept looking upstream. I crossed the bridge and also looked upstream: in the distance I could just make out a rubber raft. As it slowly neared, I could make out six soldiers on board. They were not very well coordinated in their strokes and the raft swirled lazily in the current. The two cameramen finally positioned themselves on the rocks and recorded the passing of the raft. It was not very eventful. The raft continued downstream and the cameramen sauntered back from wherever they had some from. 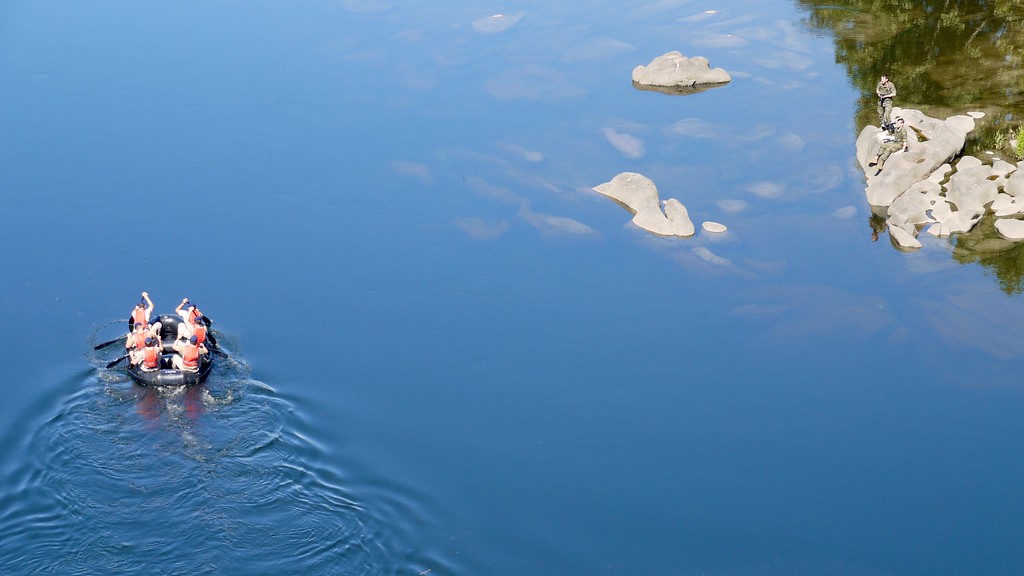 It was time to move on. We had rounded the corner of Spain and driven from the north coast to the west coast. Our next destination was Pontevedra, our first city on the west coast. It was a beautiful town and had a lot more character than some of the other towns we had visited. It was a pleasure to walk around and look at the old buildings, the monuments, the churches and the people. Based on the Wiki article, the history of Pontevedra was a dramatic one, with the height of its commerce in the 15th century before a long, slow decline to the 20th century, when it experienced a series of ups and downs. You should go check out the link, just because it really is interesting how a city’s life can ebb and flow with time.

Bridge construction along the coast 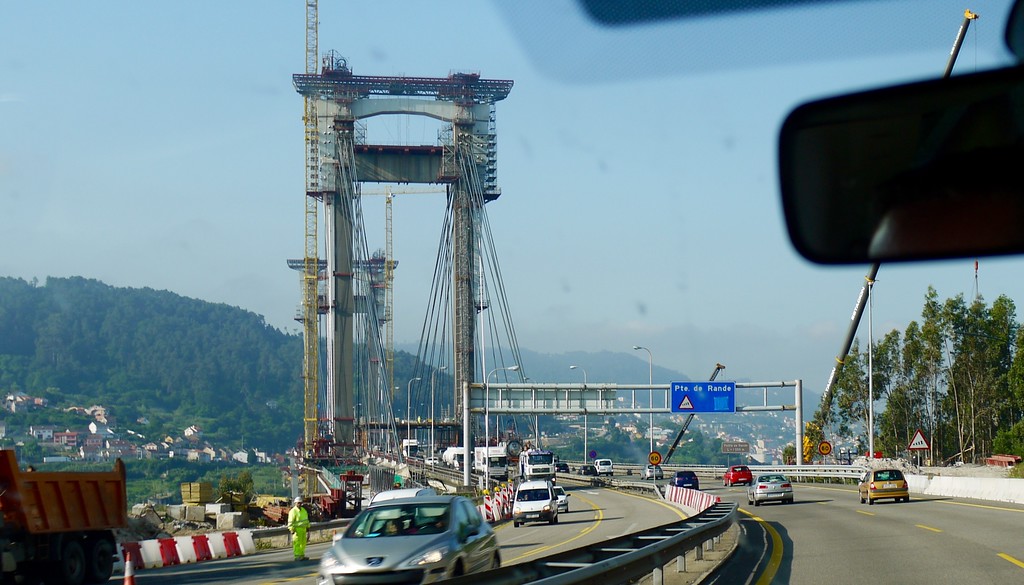 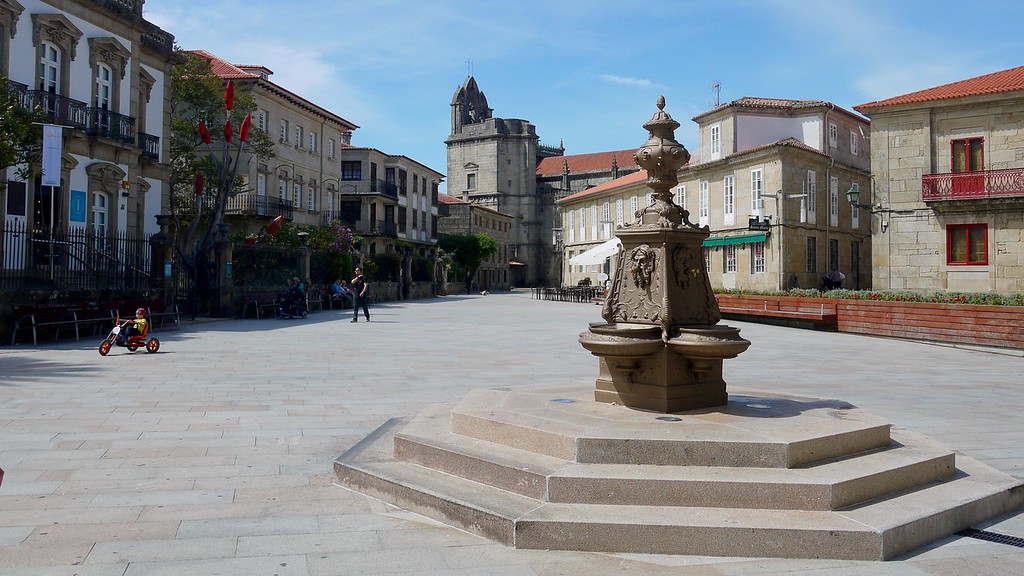 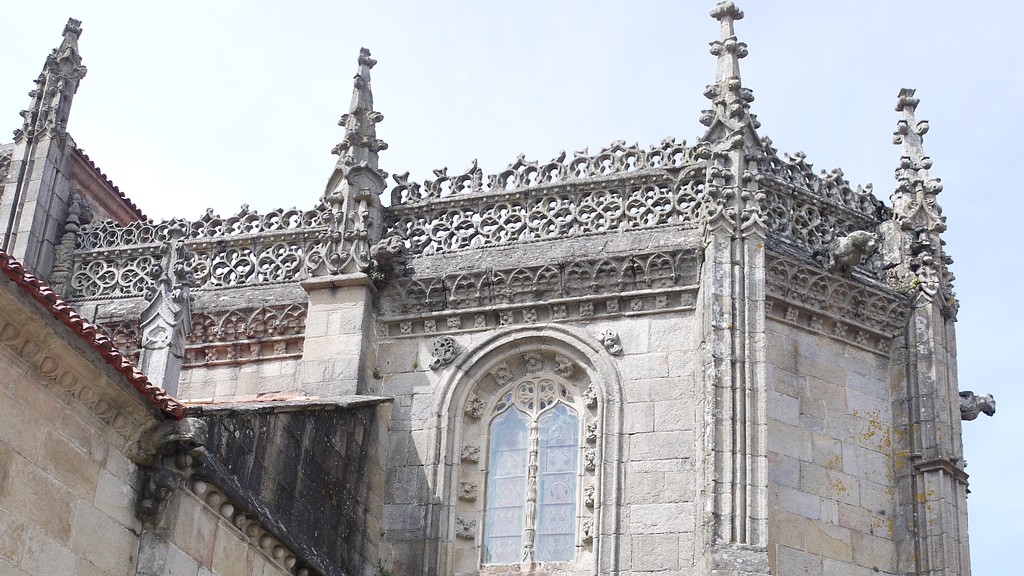 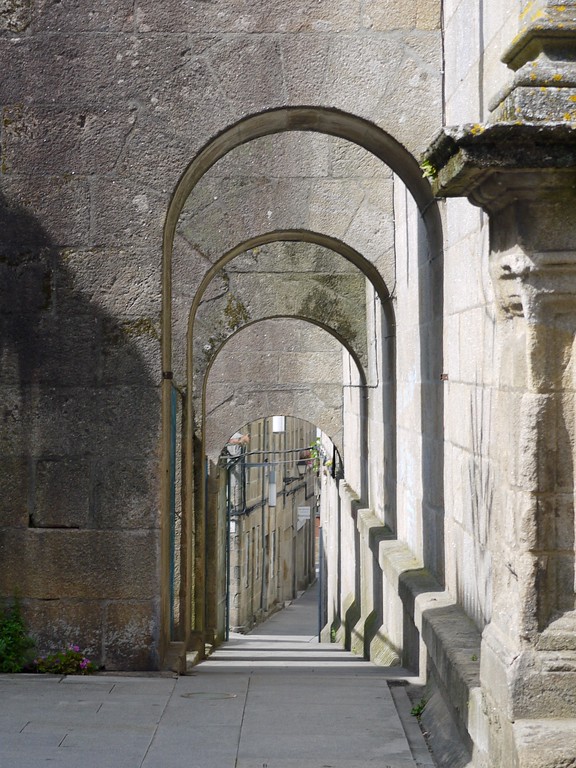 We enjoyed lunch at one of the many restaurants that lined the street. Even though we were eating a late lunch (even by Spanish standards), it was obvious that it was still early in the season, as the wide street was sparsely populated. I could imagine that in a month or two the walkways would be full of people and the shops doing a lively business. After lunch we did a little more exploring and then got back on the road for our destination for the evening: a tiny little dot on the map called Poio.

The Hotel Villa Covelo was nice, but oddly situated. There was no traditional town – the hotel was just one of many buildings that lined the road that followed the coast. But the road was not very busy, there was a pool, and we had a nice view overlooking the Pontevedra Bay. The car was parked in back, our bags unloaded and we immediately headed for the pool. 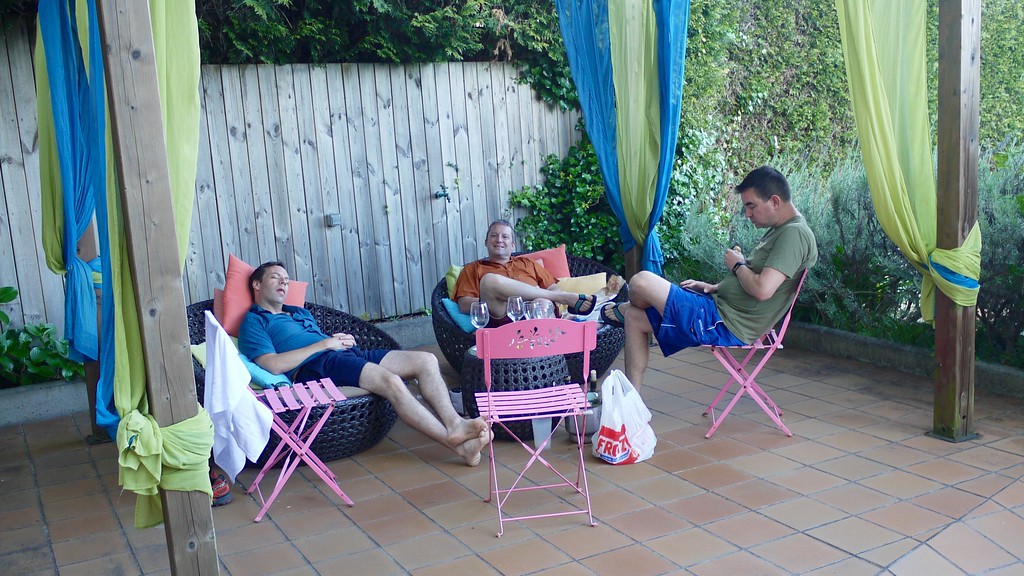 I am a good swimmer, but I generally don’t like to swim. The conditions have to be ideal for me to get into the water and these conditions were not ideal. The water was clean but cold. The guys decided that it was worthwhile to jump in, but I satisfied myself with sitting in the shade and relaxing in the warm late afternoon air.

When the boys had dried off and finished a bottle of wine it was decided to go to a nearby village for dinner. I should complement Aaron finding many of these little gems that we visited, as some of them seemed so random and obscure that we would never have found them on our own. Combarro was a prime example of this.

Just a five minute drive up the bay from our hotel was Combarro, an historic stone fishing village built on the rocky shore of the bay. Most of the houses were located along the coast and were adapted to the rocky ground. As this construction severely limited most attempts at modernisation, Combarro is unique and was able to hold on to its authentic history of life in an 18th century fishing village. We parked at a commercial lot near a very modern and uninteresting building and took some time to admire the yachts moored at the marina and the large fish swimming in the clear water. After just a short walk passed the small public beach we were wending our way through paths – not even streets – lined by stone buildings. The buildings looked as though they had been there since time began and they were surprisingly well taken care of. We walked along the narrow paths and restaurant after restaurant appeared. The village had adapted from catching fish to serving fish. 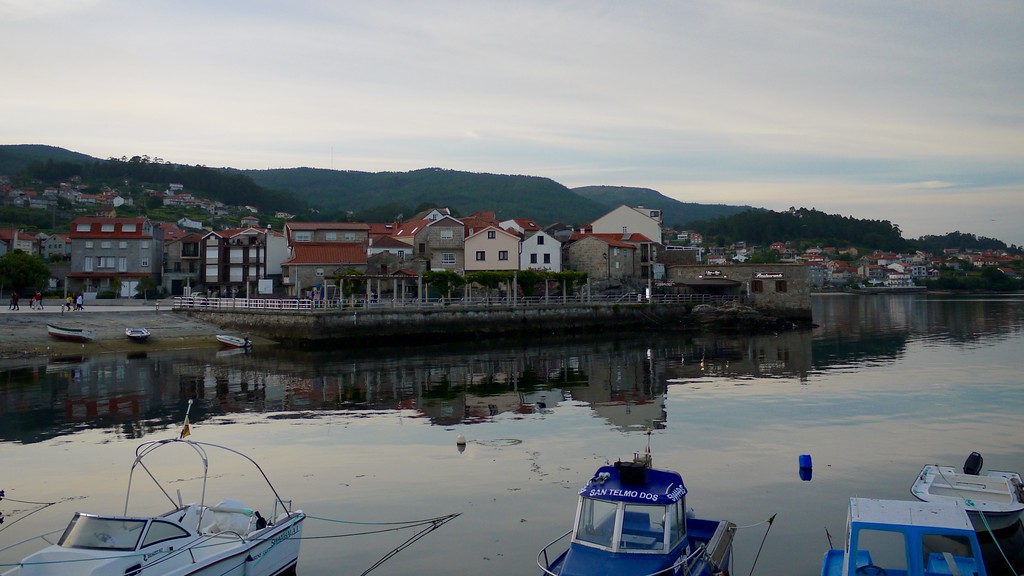 Inside one of the bars, with natural rock walls

As it was getting late and the village was not well-lit, we did not walk to the other end but instead, chose one of the restaurants that overlooked the bay. As we sat and ate, the lights on the distant shore came on and added their glow to the evening.

As I mentioned previously, on this trip I decided to really extend my palate. I am generally not a seafood eater. I will eat fish, but prefer the thicker “steaks” that can be found in salmon or Mahi-Mahi. Lobster and crab are good, but I do not put such high regard on them as others do. But on this trip, the menus were full of “other” seafood, the ones I generally avoided because I didn’t feel like trying them. Tonight I felt like trying them all. For the first time I ate cockles and prawns, and actually liked the mussels. The less-adventurous foods included coquettes and a salad.

One of the many tasty dished brought to the table 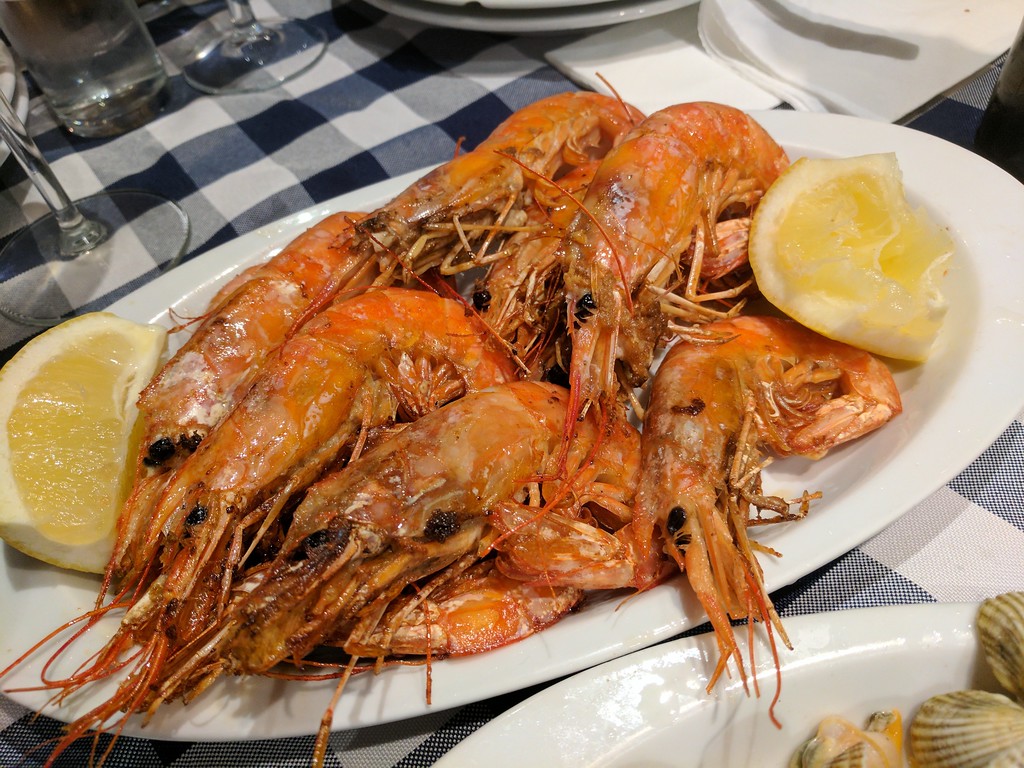 The bottles of wine brought to our table kept mysteriously emptying and by the end of the night, the guys were happily tipsy (some more than others) and were engaged in a lively conversation with the German couple at the next table. Fortunately the guys had their designated driver with them and I got us all safely back to the hotel at a very late hour.