This was the one thing I had really been looking forward to during this trip: exploring the mountains of Parque Nacional de Los Picos de Europa. The photos I had seen online made it look like a rich and dramatic region and we had dedicated at least two days here, and could extend to a third if we found that we needed more time.

They knew where breakfast was served!

Camino de Santiago: we saw signs for this all over the place during our trip. Also known as the Way of St. James, this pilgrimage route starts from many different European locations and ends at the Cathedral of Santiago de Compostela in Galicia. We had see the scallop shell, the symbol of the trail, since reaching San Sebastian and here, in the middle of this remote valley, we saw more signs for it.

It really is amazing that people will travel for months along this route to reach the Cathedral of Santiago de Compostela. Most of the trails that I saw did not look that interesting, running directly on or next to busy paved roads, or through the towns. However this did not seem to deter the thousands of pilgrims that make this trek, and we saw many of them throughout our trip making their way to the holy shrine.

The way of the scallop 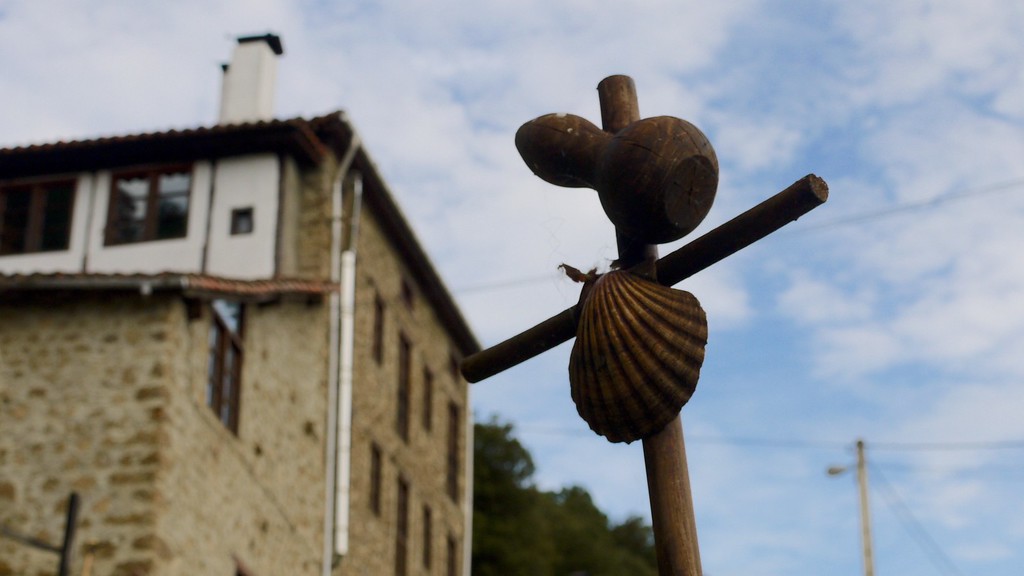 After a light breakfast in our apartment, we took the car and headed further into the mountains that surrounded our valley. The narrow gorge from yesterday was behind us and now we enjoyed a winding road that took us further up the mountains.

Thirty minutes later we were at the end of the road, where there was a hotel, a parking lot, a couple of commercial buildings and a cable car. We parked the car and headed for the cable car. 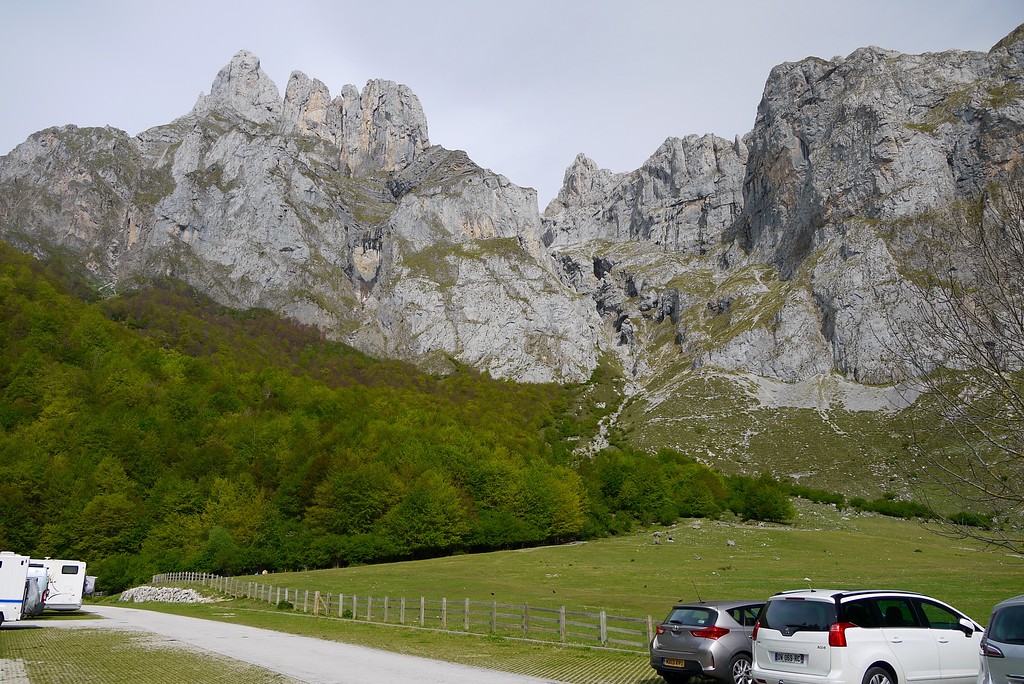 It was a nice cable car and packed full of people. I was glad to be taking “the easy way up” the side of the mountain, especially as I could see the hiking trail that wound its way through the landscape below.

From whence we came 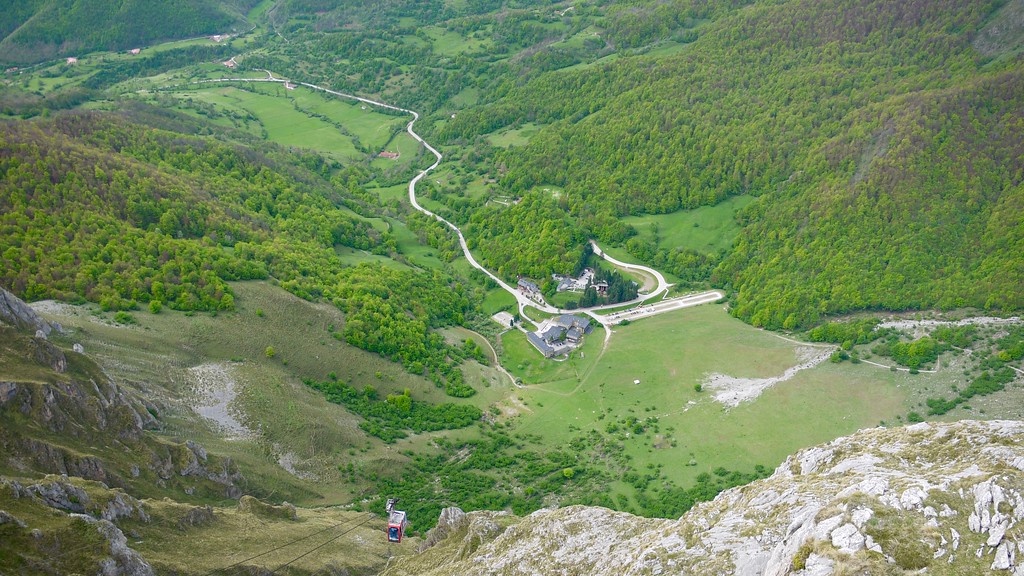 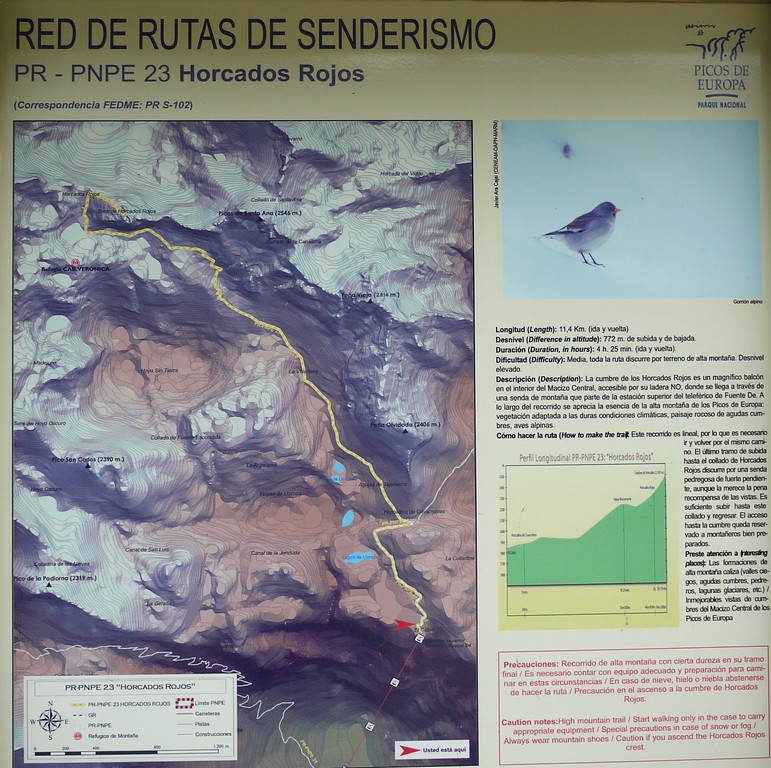 As I have stated in previous stories on this site, I am not a strong hiker. Yes, I will try and I will (usually) complete the hike at hand, but I am slow. And I complain most of the way. Not an attractive combination, I know, but usually I am just with Dan and he is generally too far ahead of me to hear my rumblings. Now it would be the four of us, hiking up a barren, grey mountain. The planned route was stated to be 4.5 hours round trip – I could handle that! What I didn’t notice was the elevation gain in that short time…

The weather was perfect: fluffy clouds in blue skies, a light breeze and temperatures that bordered on “cool”. Because we had to pack for a 12 day trip with only about two days’ worth of “outdoor activities”, I had a very limited choice of clothing that I brought. I ended up wearing black shorts, knee-high orange socks, brown hiking boots and a long sleeve purple hiking top covered by a light olive green sweater. Topping all of it was my bright blue hat. I knew that what I was wearing looked pretty darn ridiculous, but I adopted the Honey Badger attitude and just didn’t care. And conveniently, there are no good photos of me. Just this one: 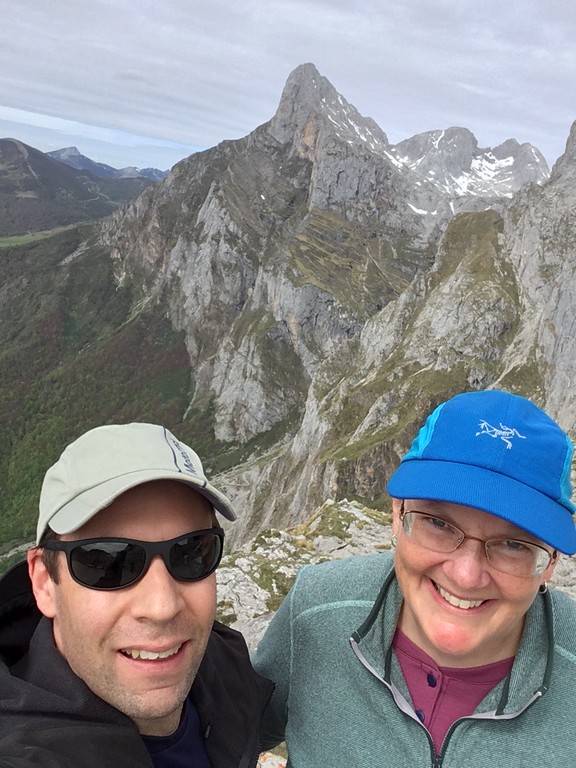 I spent the hike up the mountain well behind the guys, but this was no surprise and they knew that we would meet at the top. Normally I don’t mind so much being at the back because I have many things to look at and distract myself with, but on this hike, there wasn’t a lot to see other than the grey rocks. It was not very distracting and I was not enjoying myself very much. At least there was no one around to hear me complain.

And now above the snow line 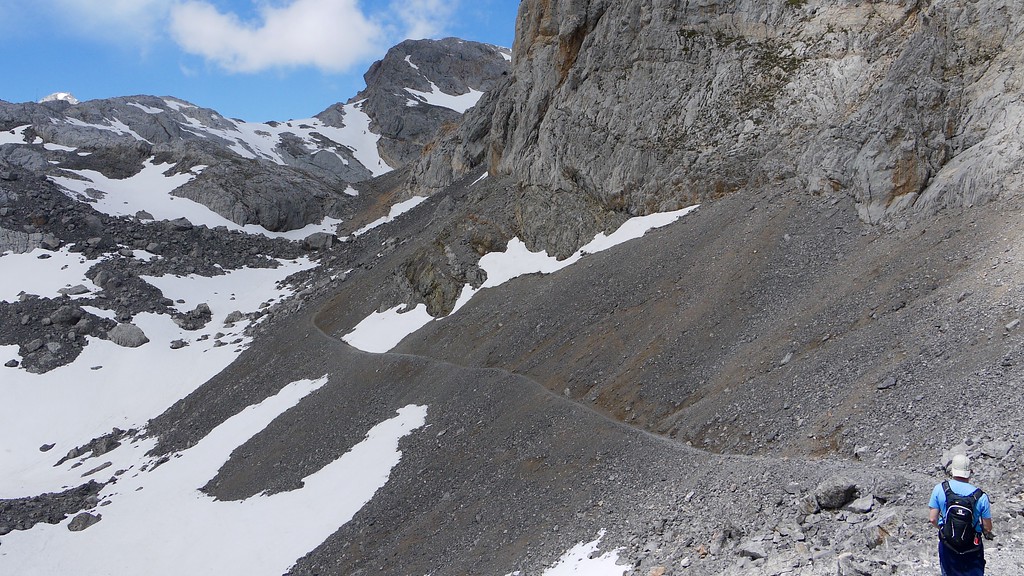 The last bit of the hike was across some slippery snow fields where I post-holed (when your foot breaks through the hard crust of the snow and your leg drops into the deep snow) a couple of times – one time up to my butt. The snow was deep. In addition, the rocks underneath the snow were jagged and sharp, so falling through onto them could be a painful experience. In order to avoid the snow, we took a detour up a rough rock face until we had reached the saddle of the mountain. At this point I was done: I had reached what I felt was a good place and relaxed there while the boys continued up to “the top”.

A little bit of scrambling – check out those socks! (friend’s photo)

The guys keep on going

Looking north, where the Atlantic ocean meets the sky

The rocky view around me

I could hear the guys calling to each other as they summited the, um, summit and I laid back to enjoy the breeze and fluffy clouds overhead. Then my reverie came to an end as a whining English girl and her adult companions reached a flat area not too far from me. This girl whined more than I did, and her charming English accent just made her sound like a spoiled brat. I was happy when the guys returned and we could leave.

It was nice to see the green of the valley again 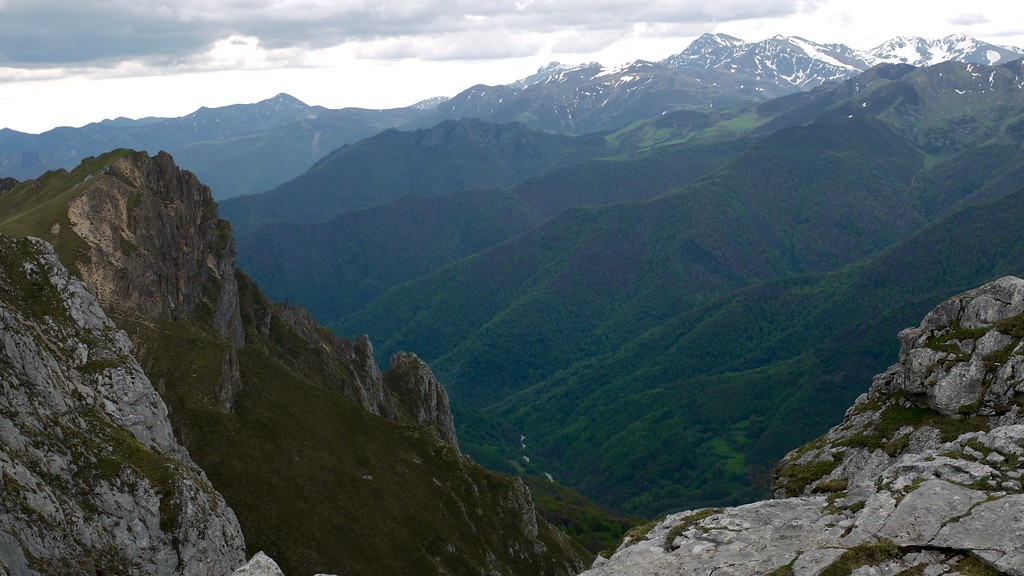 All-in-all, it was a successful hike. The boys were very happy with it, and I was just happy to have made it up and back. My Honey Badger clothes performed very well and I was comfortable for the trip in that regard. It was an 11 kilometer hike that took me up 772m (2,500′) and we did it in 4 hours. During our descent the English girl and her companions caught up to us and we learned that one of them was a local mountain guide. He mentioned that this time of year it is common that there is so much snow that the peak we reached is not even accessible, so we were pretty lucky to have as much of a clear path as we did. He then also gave us good information that snow was in the forecast for tomorrow: our mountain weather window was closing fast.

The cable car return was uneventful and it wasn’t long before we were back in the car and driving back down the mountain. A quick stop at a local cheese shop punctuated an otherwise uneventful drive to Potes, where dinner waited for us. 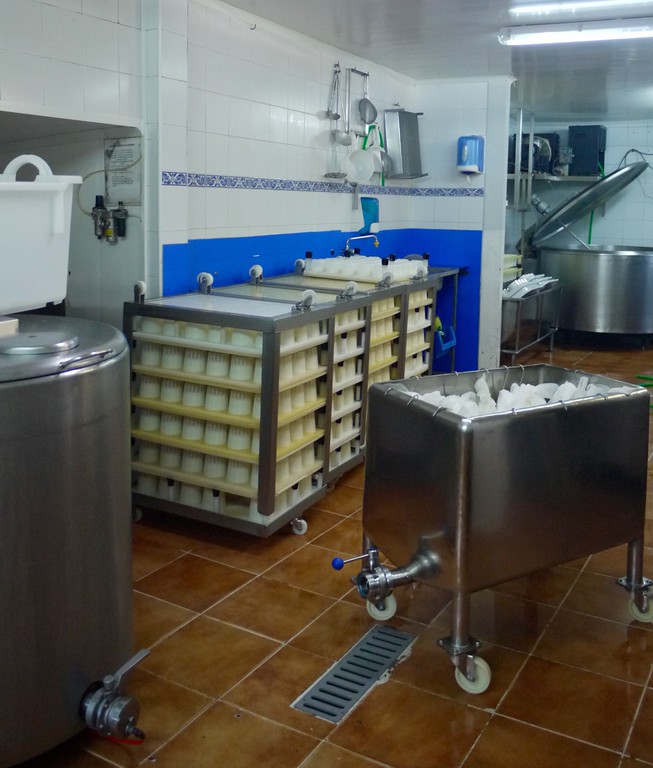 It was a tiny operation

As what would be typical of the trip, we spent a lot of time wandering around looking for “just the right place” to eat and/or drink. As I did not have a special interest in the food or drink, this became a little irksome, but since it was important to the boys, I just followed along until they made their decision.

Ah, where should we eat?

Decision has been made!

Sidra (cider) is a big thing in Spain, particularly in northern Spain where we were, in the Asturias and Basque regions. It is produced primarily from the indigenous crabapple, with sweeter varieties of apple used to balance the final result.

In the time of pilgrimage, in the 12th century or so, sidra was more popular than wine. Then in the early 1600s apple trees from America were introduced into Spain and production of sidra increased. After a short decline during the Spanish Civil War, it boomed again in the eighties. The climate here is ideal for apple growing; mild, wet summers and mild winters.

There are a surprising number of rules in the art of drinking Sidra. Here are just a few of them:
– You must drink the whole bottle at one sitting, since cider oxidizes quickly and becomes flat.
– A “gulp” or small amount of cider should be poured into a narrow glass from a height of around 30 cm or three feet. This aerates the cider, enhancing the bouquet and the natural carbonation, and is called “throwing” the cider, which produces the gas.
– The pour should be consumed at once.

It was amusing to watch the servers pour the glass of sidra, as they would often adopt a “thousand yard stare” and look off into space as they deliberately avoided watching the cider pour into the cup. I can understand the science behind needing this pour height, but it struck me as a gimmick considering that there were contraptions available that did the same thing without all of the theatrics. 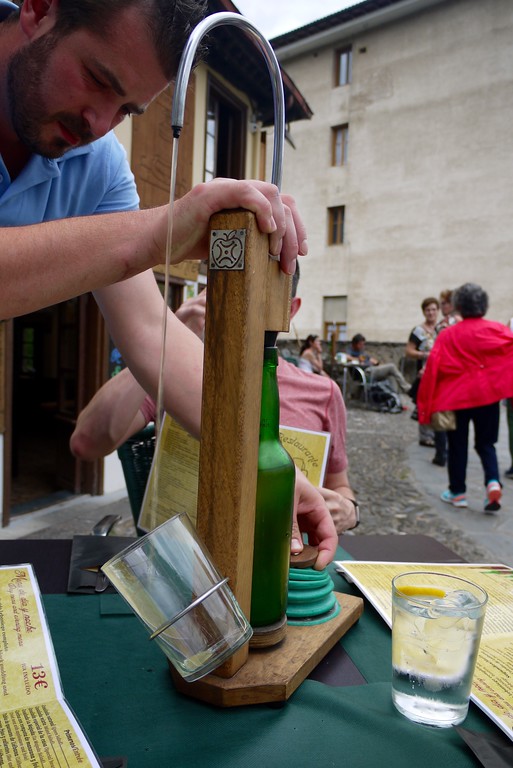 After we were satisfied with our evening meal (which was very satisfactory), we went back to our apartment and joined our host in his bar downstairs for a while before finally turning in for the night.