Generally speaking, during this trip we didn’t start our mornings until 10am. By the time we got motivated that morning, it was bright, sunny and beautiful and we planned to explore the city. San Sebastian (central) is on a peninsula, with a high hill called “Urgull” between it and the Atlantic. A small history museum and a very large statue of Jesus now stands at the top of this hill, and we were going to walk up and see it for ourselves.

Morning view of the beach 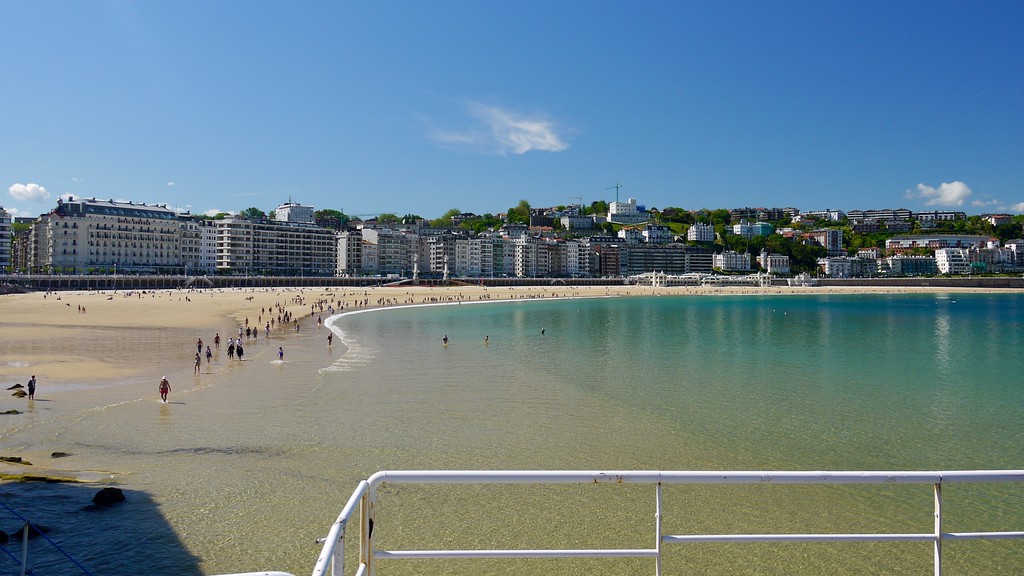 Urgull has a long history as a defensive point for the city, but over the years this changed from a physical place of fighting, to a place that memorializes past fights, including a soldiers’ cemetery on the northern slope of the mountain that is dedicated to the British soldiers killed during the Napoleonic Wars. 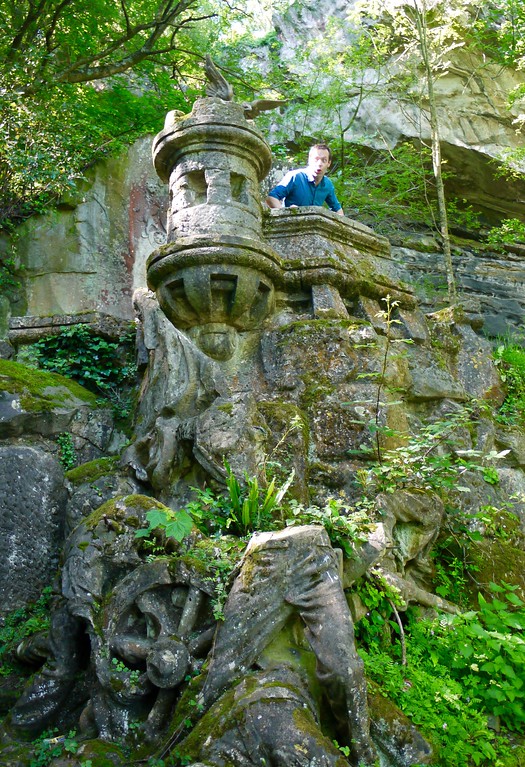 The view of San Sebastian from the top

Lots of activity in the bay 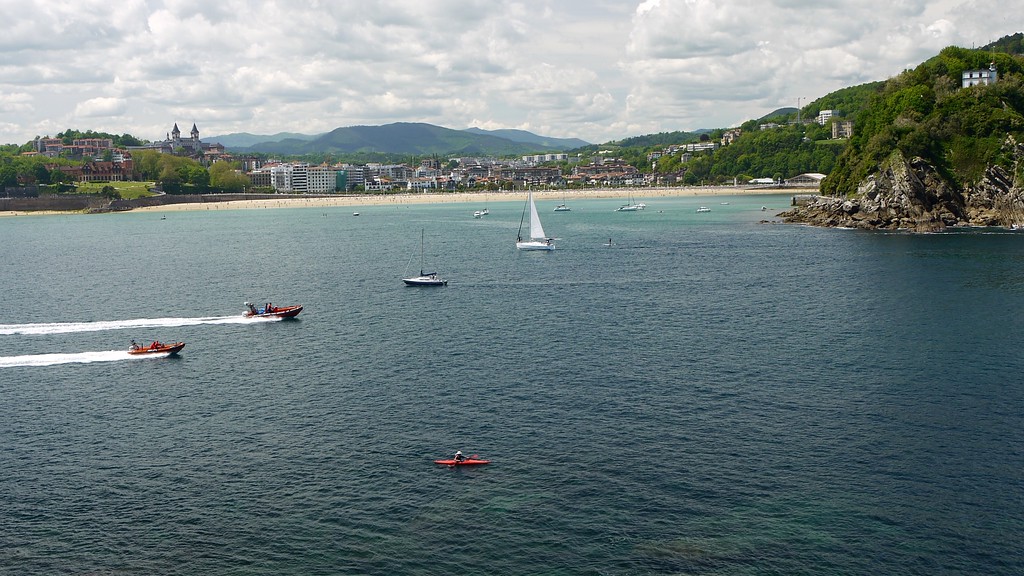 Once we were back in the city we decided to head for lunch. Aaron’s research had located a restaurant on the other side of town, Restaurant Rekondo. It was an upscale restaurant – and uphill, too. We followed the boardwalk along the wide, sandy beach, taking in the sight of many people enjoying the sunny day.

Our goal was on the other side of the bay

Looking back at the Hill and where our apartment is – and Jesus, too!

It turned out that the restaurant was a little further than we thought, and about halfway up the hill that forms the western border of the city. The day was getting warm and the sun was hot, so I was happy when we moved out of the sun of the boardwalk, through some neighborhood streets and up a tree-shaded road. Restaurant Rekondo was on a hairpin turn, sitting on the outside and overlooking a green and lush valley. We hadn’t made reservations (highly recommended, per the website), but hoped to grab a table nonetheless. We were lucky: they had an available table! It was inside, and right near the kitchen, but it was a table and they took our wine and lunch orders promptly.

One hundred plus page wine “book”!

Lunch was very good. I went easy and just ordered steak, since a good steak is hard to find (or at least afford) in Switzerland. While we ate we discussed what to do after lunch. Our apartment host had mentioned that there was a funicular and an old amusement park on this side of town. We debated walking the rest of the way up the hill, but decided that the road was not a pleasant one to walk along, as there wasn’t a lot of space for pedestrians. Instead, we walked back down the hill, found the funicular station with no problem, and waited just ten minutes for the next car to arrive. 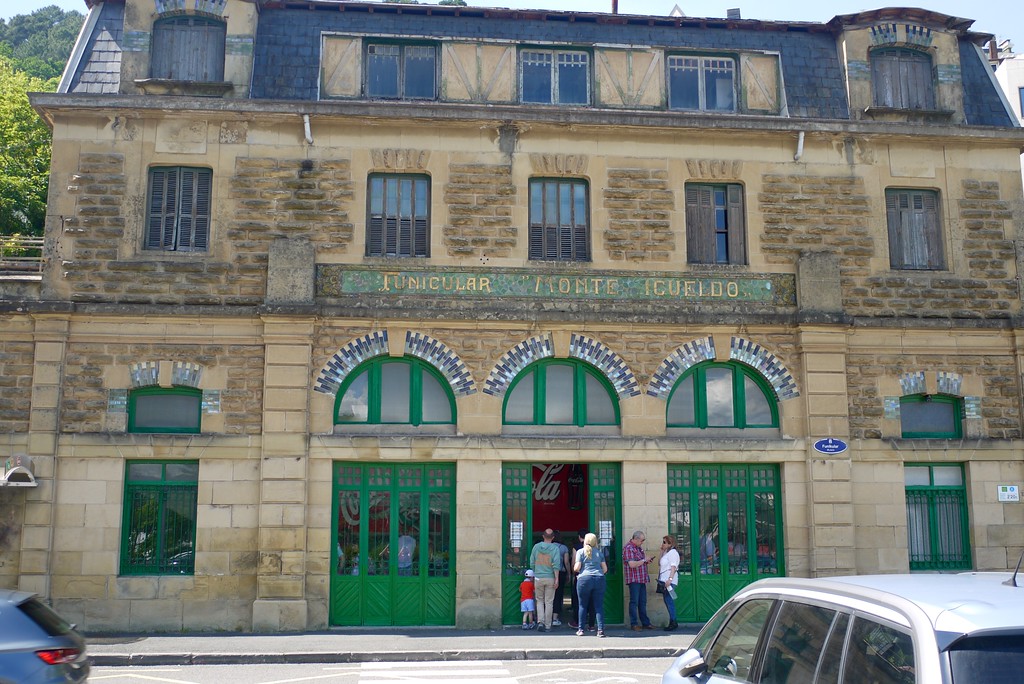 It was a short but steep trip up the mountain and this was the view that greeted us: 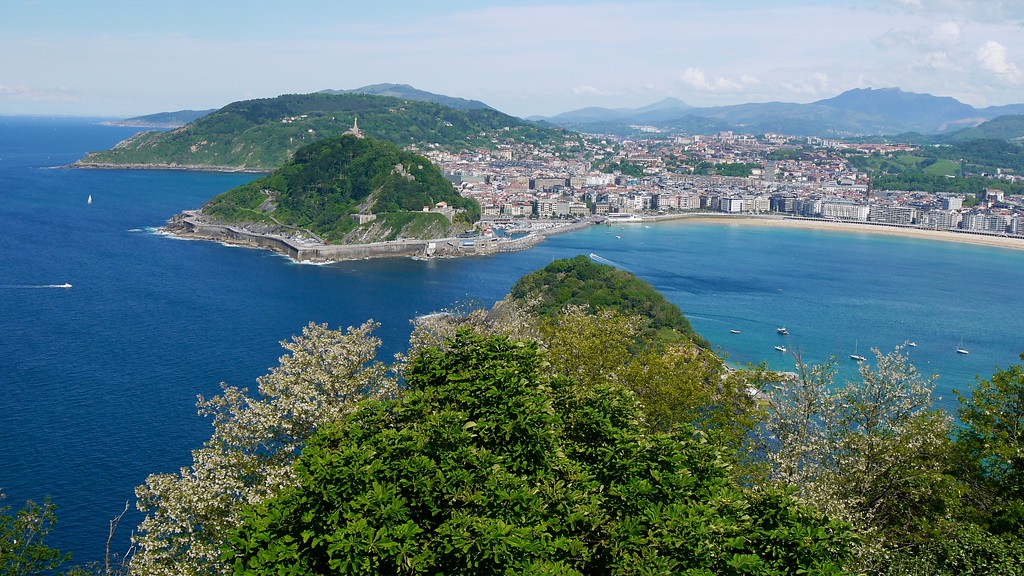 From here, I got an excellent sense of how perfectly the city is nestled between the ocean and mountains, and how sheltered the bay is. Coupled with the vibrancy of the city streets, I could see how people fall in love with this place.

As I mentioned earlier, there is an amusement park at the top of Monte Igueldo and our first view of it was a quaint log flume. This park was built in 1912 and there hasn’t been a lot of obvious improvements since then. It was small, had old fashioned rides and an arcade with just enough booths to be interesting.

View from the log flume – because of course we had to try it!

The smallest train track gets the biggest views!

Sadly, we didn’t ride the rollercoaster 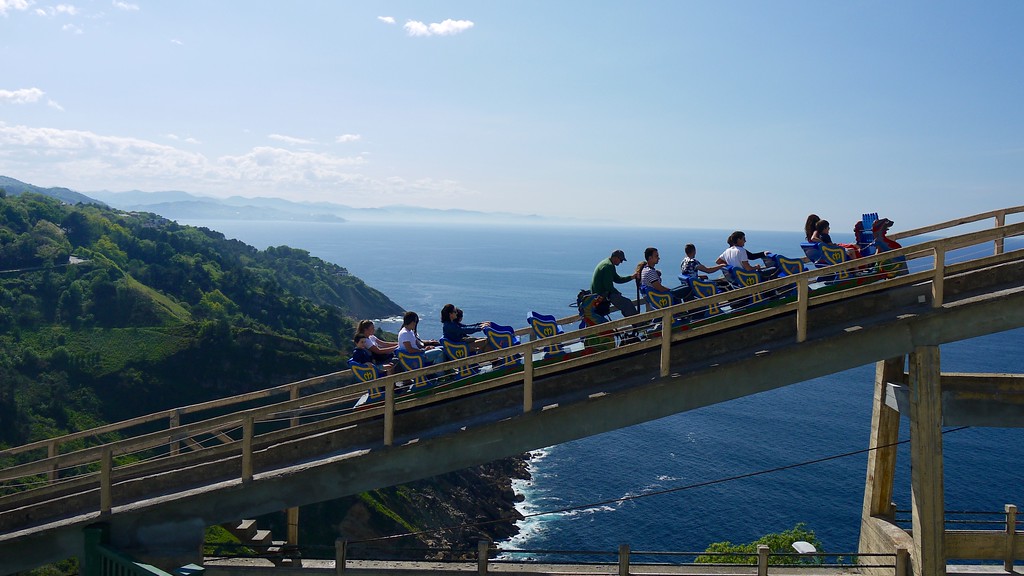 We had another drink (!) in the amusement park and then headed back down to the city. We would leave tomorrow, so we had one more night of Pintxos before leaving Basque Country. And because there was still a lot of daylight left, we thought that it would be nice to see more of the city while we could.

Since we had already been west, we chose to go east and see the more commercial side of the city. We had to cross the Urumea River, a languid tidal river that cuts the old town center off from the more modern expansion of the city. 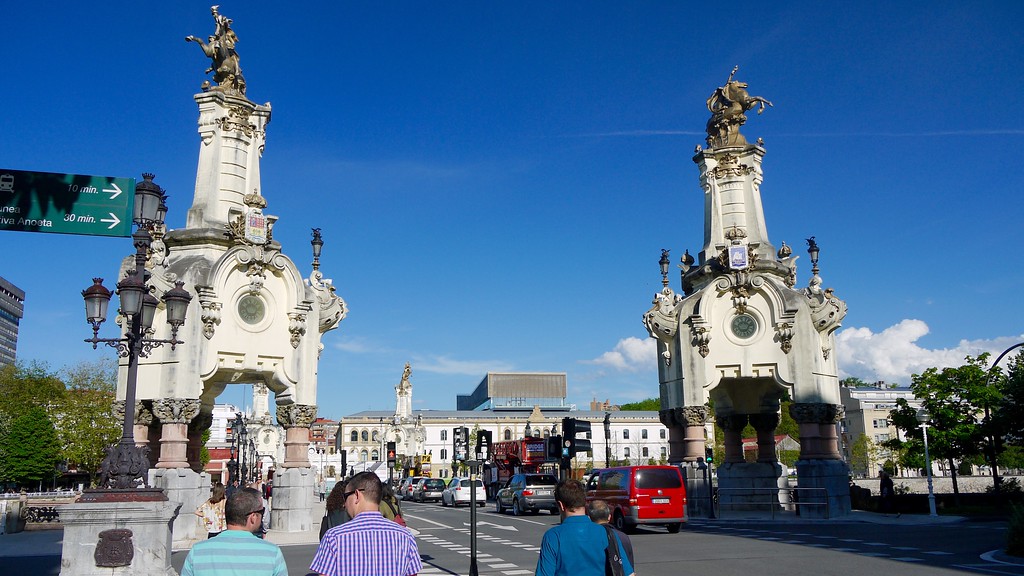 Looking up the Urumea

We didn’t find much going on this late Sunday afternoon and the empty streets encouraged us to head back into the old center. In front of our apartment was a large playground with a two-level carousel, a park and the front of the Town Hall. It all made for a lively and beautiful setting. 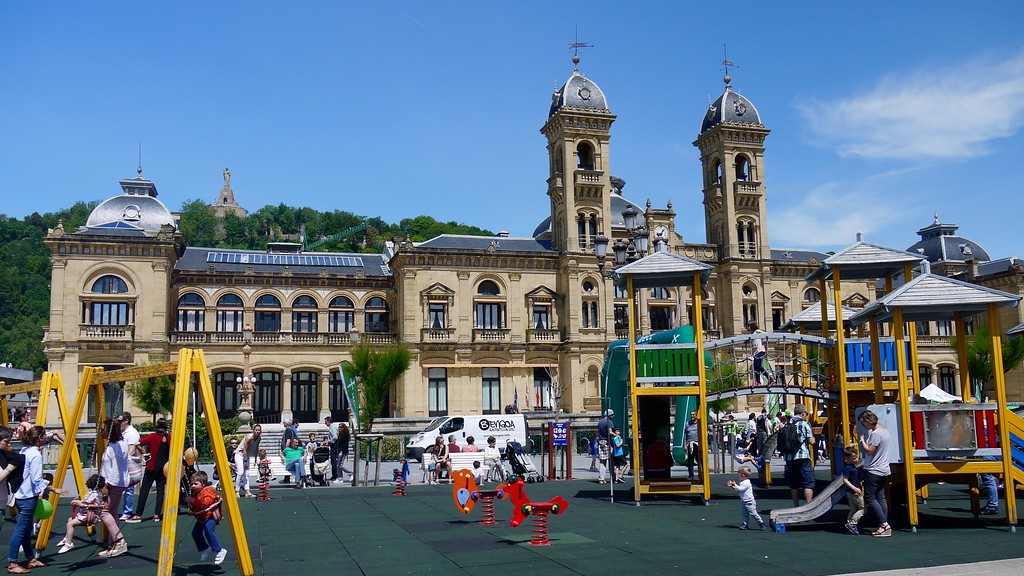 And one very sad Mickey Mouse

Evening on Zurriola beach – this is where the surfers hang out

I didn’t take any Pintxos pictures because they would have looked just like the previous evening’s (albeit with a lot less people). But at least this time we knew what was expected and how to “play the game”. We went back to one particular place that we had enjoyed the previous evening and, because it was a Sunday night, it was much quieter and more enjoyable. I was able to actually watch the employees interact with the customers, and realized that when someone left a tip, the bartender would ring a bell. Can’t say that I noticed that the night before! 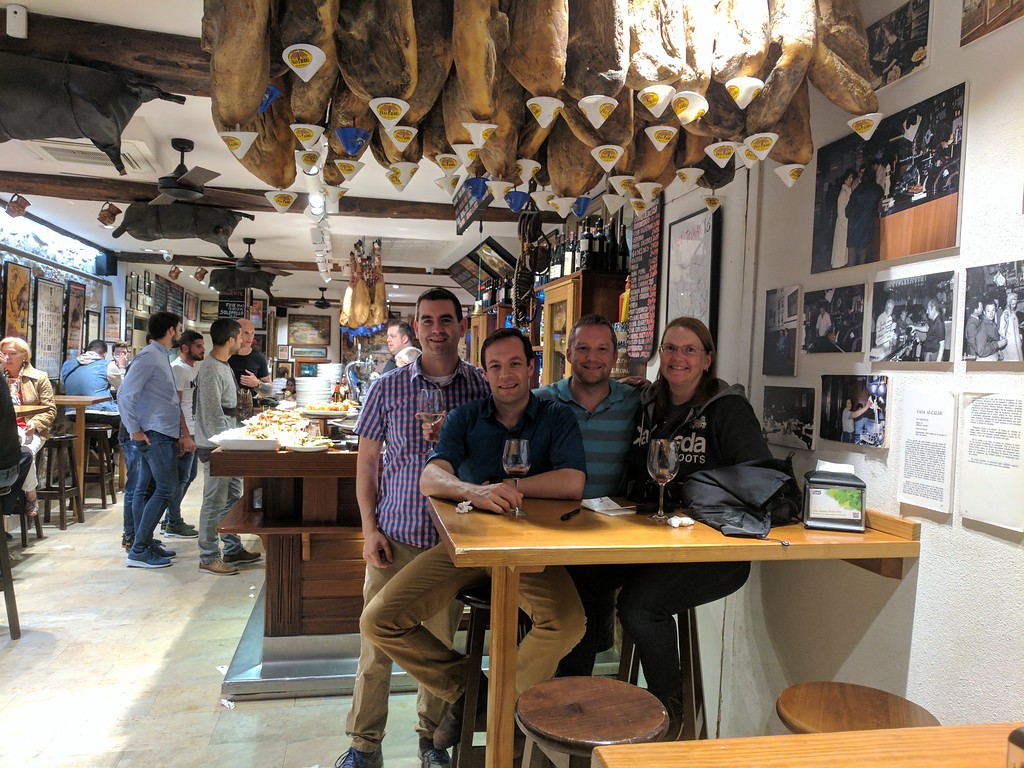 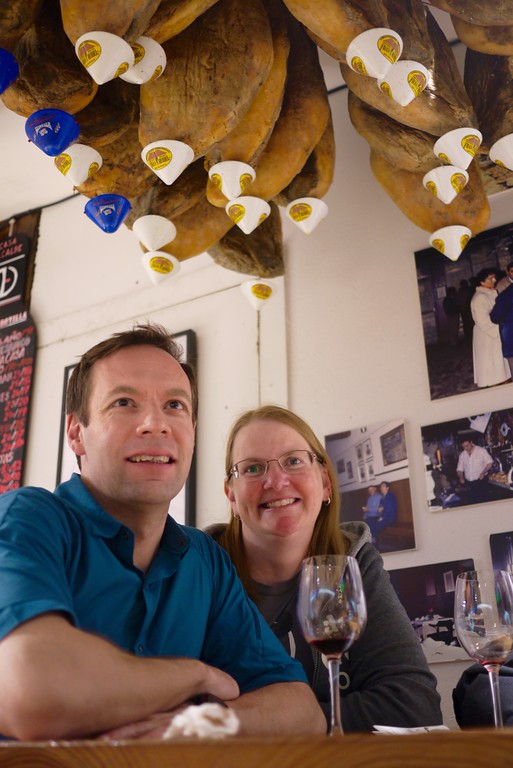 That night I didn’t sleep as well as I expected, considering that we had walked over 12 kilometers that day. But there was a party of sorts outside our window and despite being on the 4th floor, the noise came in loud and clear through our open window. But it was the last night in San Sebastian: tomorrow we would continue on our journey!