When I got up the next morning, I had some time to kill since the guys had decided to go for a quick run on the beach before packing things up. I took the time to explore the sleepy side streets and peek behind some open doors. The city had shown me a lot of different faces, depending on the day of the week and time of day I saw it.

Not everyone appreciated our visit

Delicious “breakfast for the road” stop just around the corner

Craig and I were the two drivers listed on the rental car contract and our habit evolved that he drove in the morning, when there hadn’t been any alcohol involved, but once we stopped somewhere, I would take over the chauffeur responsibilities. This morning, Craig took the keys and got us out of San Sebastian.

Our first stop was Bilbao, a coastal city just over an hour west. We did not take the coastal road, even though it had been recommended to me. Honestly, I hadn’t even given it a thought, especially since I was in the backseat. It was just exciting to know that we were going to see something new!

Bilbao has a reputation for its Guggenheim Museum, architecture and (of course), Pintxos. Aaron had homed in on Plaza Nueva, a square near the center of the city that was built in 1851. There are 66 arches that line the four sides and under those arches are a number of pintxos bars and restaurants. It didn’t take us long to find the plaza from our parking place, and we immediately found a place to try some of the regional wines. 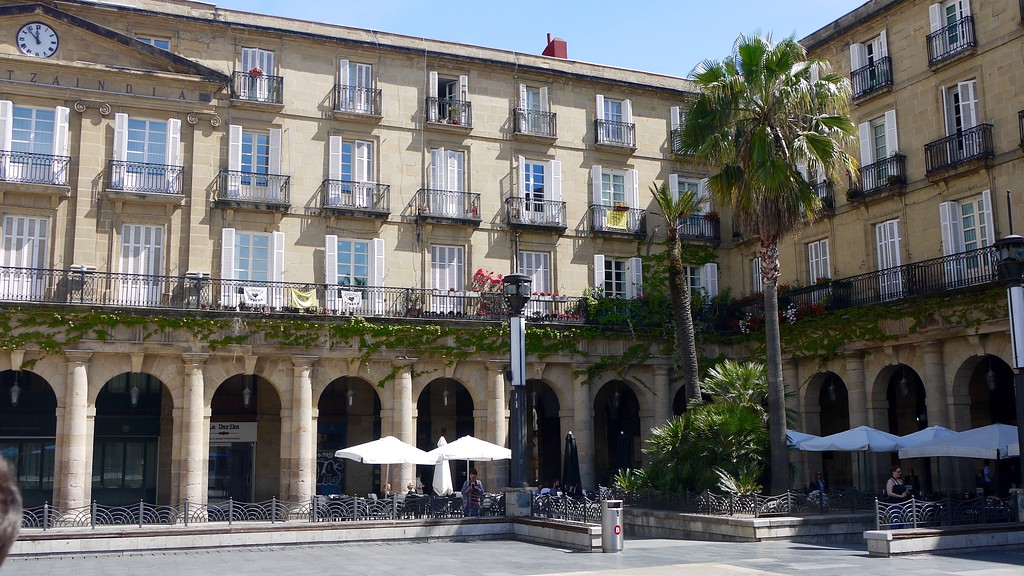 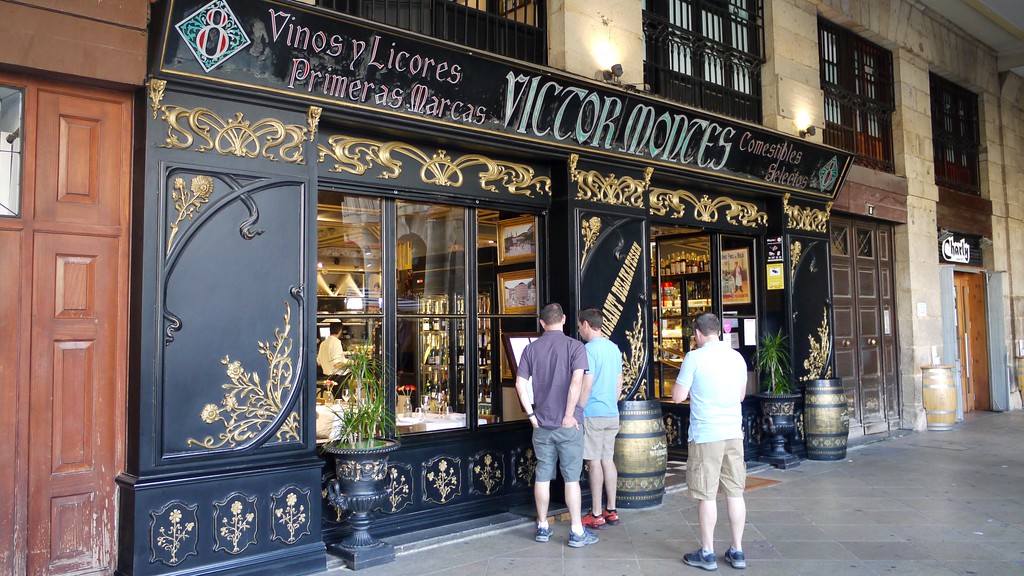 They say that in Bilbao the size of one’s balcony was a sign of one’s wealth. With this in mind I kept an eye on the balconies that lined the city’s old streets. Perhaps I didn’t look close enough, or my eye is not trained in the nuances of balcony architecture, but everyone looked pretty darn poor. But hey, at least they had balconies! 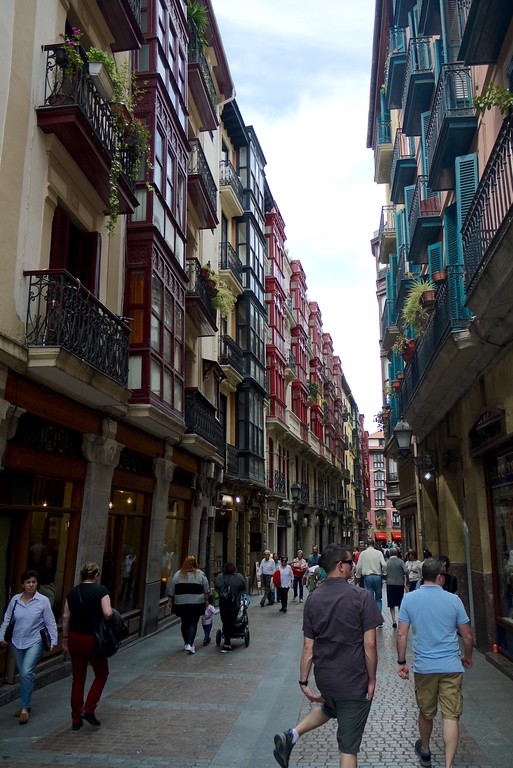 The guys enjoyed their drinks and I enjoyed watching the parade of people that passed through the plaza. We wandered some more of the streets and checked out a few of the shops, but generally we did not see anything that called to us to stick around. Besides, we had a Destination for the night!

It was my turn to drive (those mid-morning drinks came pretty early today!) and the road meandered west along the coast, playing peek-a-boo with the Atlantic. The weather was fantastic, with blue skies above, a blue ocean to the north and forested green mountains to the south.

We had been on the road for an hour an a half and were discussing that we had some time to kill before we were expected at our next destination. I kept my eye on the brown road signs (historic sites) and saw one that might be interesting. With the blessing from my passengers, I took the exit and we went in search of an abbey. We parked the car in the town of Comillas but did not find any further signs for whatever it was that caught my eye from the highway. As we wandered around the quiet streets we noticed an oddly-shaped turret on the other side of town. With nothing else to distract us, we walked over to see what it was.

It turned out to be Villa Quijano, a modest building designed by the famous architect Antoni Gaudí. I knew the name, and had probably seen photos of his work over the years, but to stumble upon one of his designs by such a random chance was pretty cool. Aaron and Craig were not interested in paying to enter the building site, but Dan and I were, so they followed us in anyway.

The house was built for Máximo Díaz de Quijano in 1885 as a summer house. As I explored the rooms and enjoyed the sunny rooms, I could imagine how pleasant it must have been to spend time here. I found this website where the author seems to know something about architecture, if you want some more details with a simple click.

Greetings at the Gaudi House 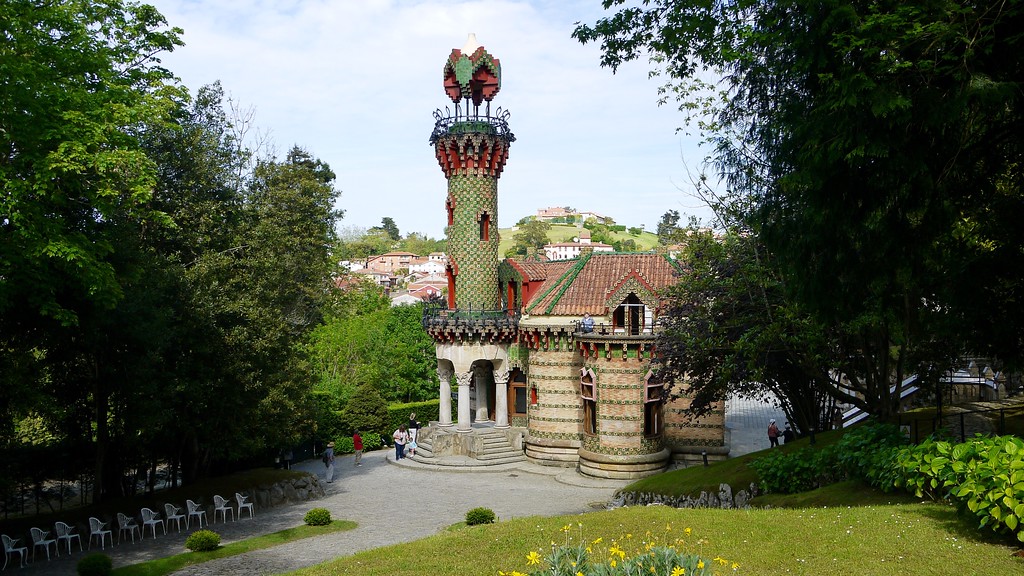 We were free to explore most of the house. There were nicely proportioned rooms on the main floor with intricate wooden ceilings and beautiful stained glass windows. In the center of the house was a large greenhouse, its glass walls surrounded by the house, but reaching up past the roof tiles to reach the sun. 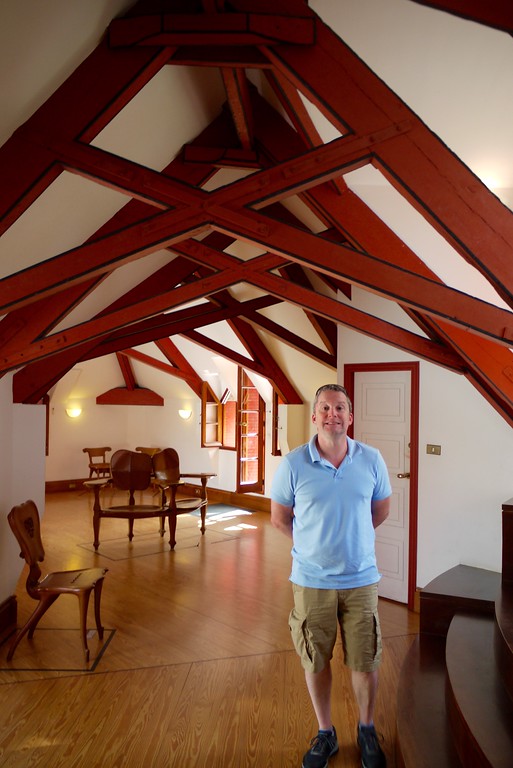 Since Aaron and Craig were not not as interested in the Gaudi house as we were, we did not dally long. We returned to the center of town, found our car and continued along our previous course

Buildings in the town of Comillas

But before we could even get back to the motorway we saw a sign for a fancy old cemetery. There are usually cool things to see in fancy old cemeteries so we parked the car again and got out for a look. Despite the high praise on the sign, I was not impressed. 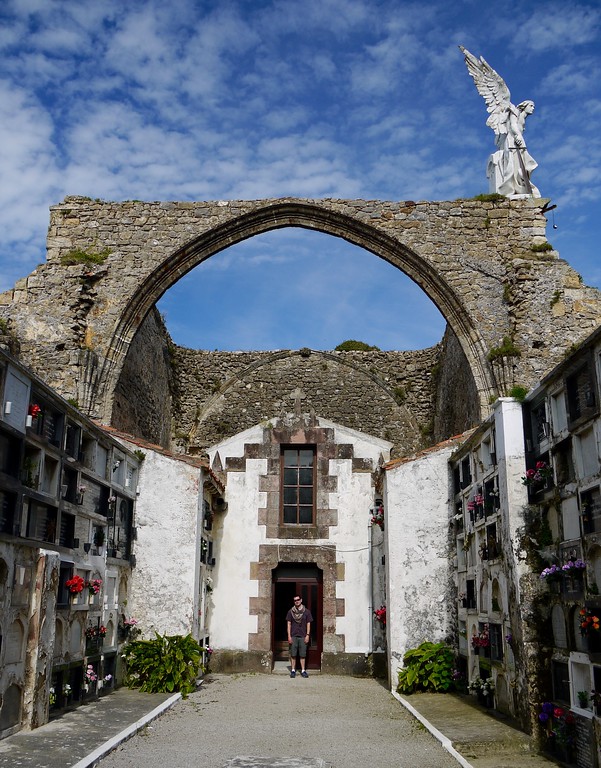 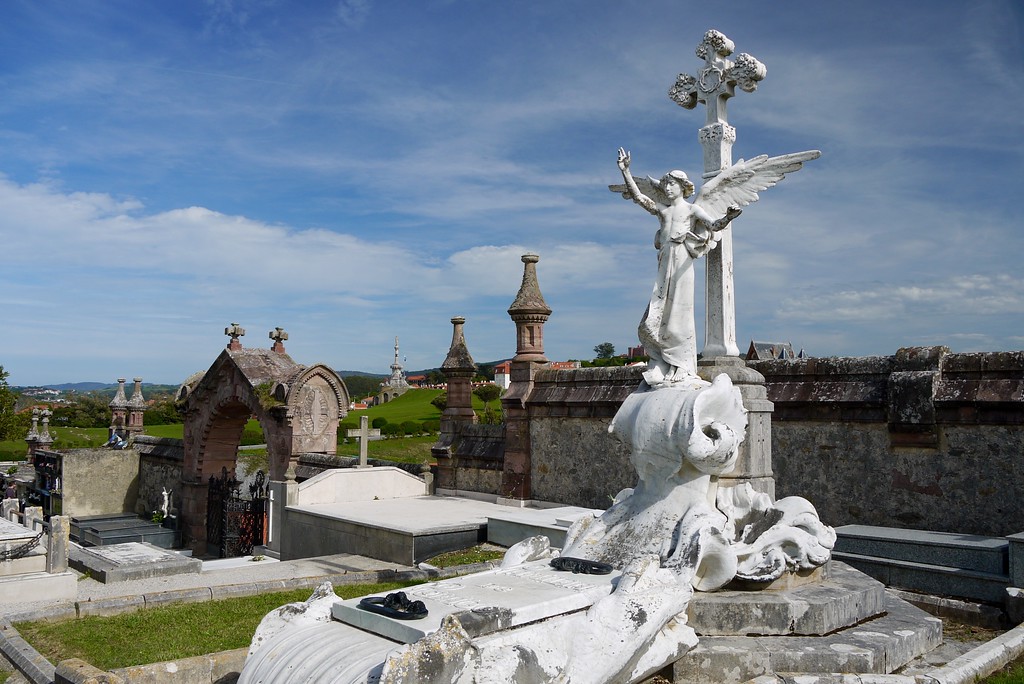 View from the cemetery

Back into car we went and headed for our final destination of the day: Armaño, deep between two massive National Parks at the northern border of Spain.

I was still driving which meant that I could not take pictures like I would have liked to, instead giving the task to an unenthusiastic Dan.

Dan takes a photo at my insistence

I knew that we would be entering “mountainous country”, but nothing prepared me for the narrow, twisting gorge that I found myself navigating through. The boys were concerned for the well-being of the car, as the guard rails and stone walls were close and unforgiving. Oh ye of little faith!

And again, I had to rely on Dan’s intermittent use of the camera. Needless to say, the most dramatic sections were not caught on film. 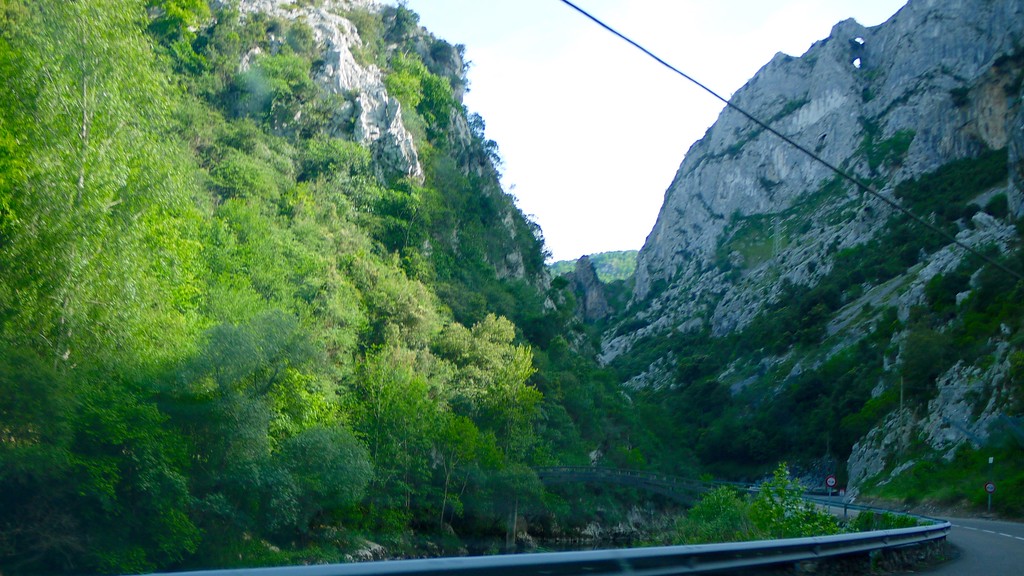 The gorge lasted a long time – longer than I thought possible – and I considered when I could come back and experience it again but on the motorcycle. We were nearing our destination and our GPS was pretty good at getting us into the tiny hamlet of Armaño. It is home to about 20 buildings and streets so narrow we had to pull in our wing mirrors.

(File photo from when Craig was driving)

Our habitation for the next two nights was an AirBnB home, beautifully updated with its original stone walls and thick wooden beams. And the bonus: the owner ran a small bar in the undercroft.

Bad lighting, but you can still see the beauty inside 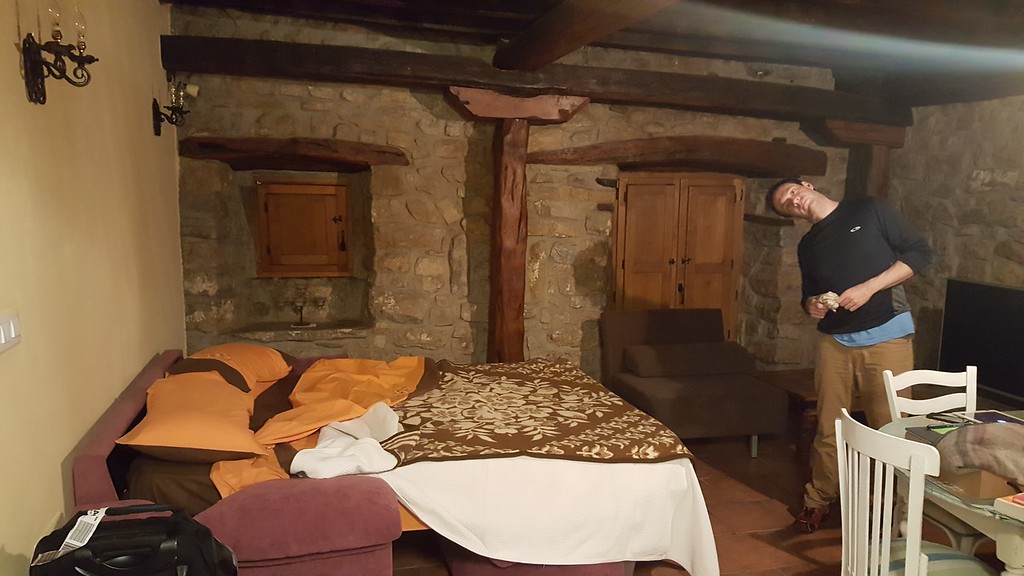 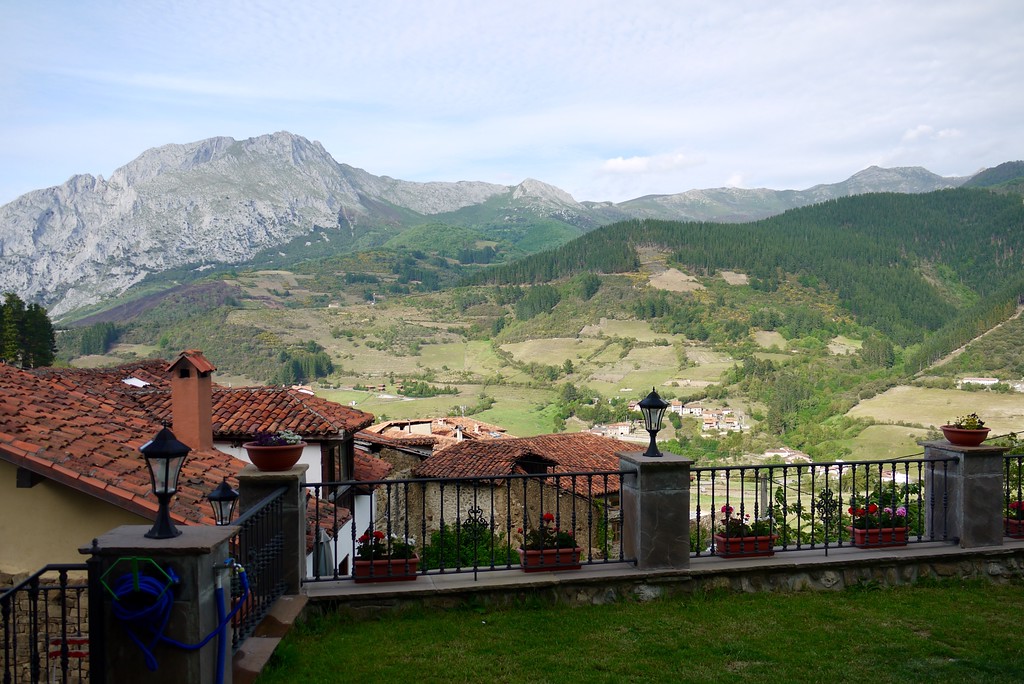 It had been a long day but we were hungry. The town of Potes was nearby and the closest thing to offer us an option for dinner at this hour. We unloaded the car and then loaded ourselves back in to make the trip for dinner. It was just a few minutes to the bottom of the valley and Potes wasn’t much further. 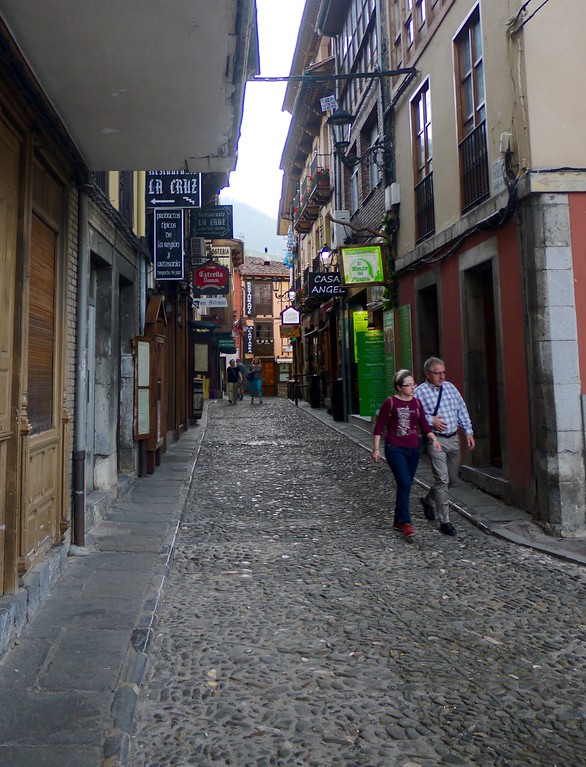 El Bodegon – our source for dinner

We sat outside; here’s a peek inside

It had been a long day and now we were in a completely new environment. Not so much drinking here, but instead there would be sporting activities. It was time to get some rest!