With the news of impending snow in the mountains and (probably) rain in the valleys, it did not bode well for further outdoor activities. We decided that night that we would pack up the next day and head back to the coast. There were more wines to be sampled and pintxos to be eaten!

True to the forecast of our mountain guide friend, we woke up to overcast skies and drizzling rain. We took our time getting ready and didn’t hit the road until almost 11 o’clock.

The clouds have moved in 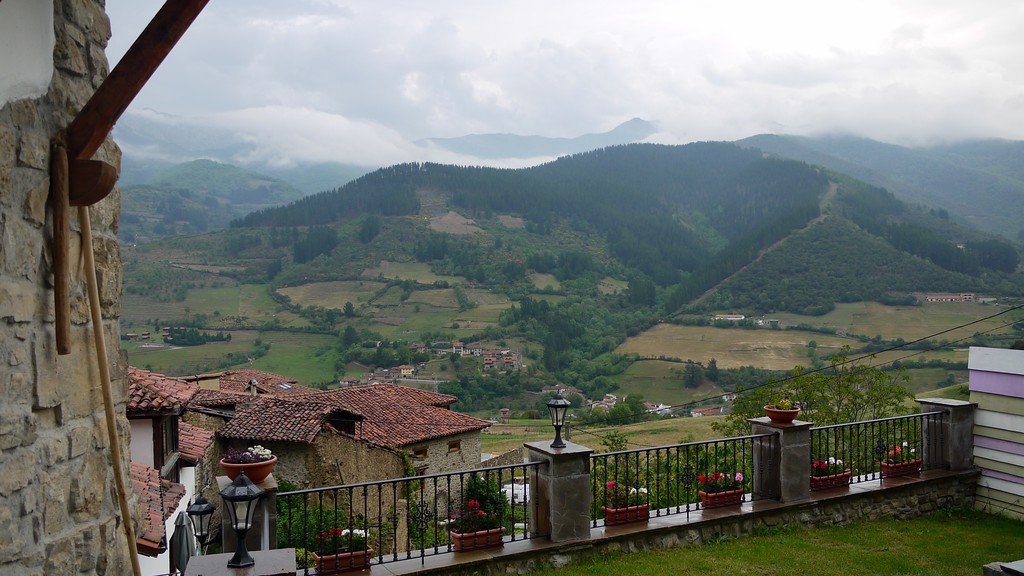 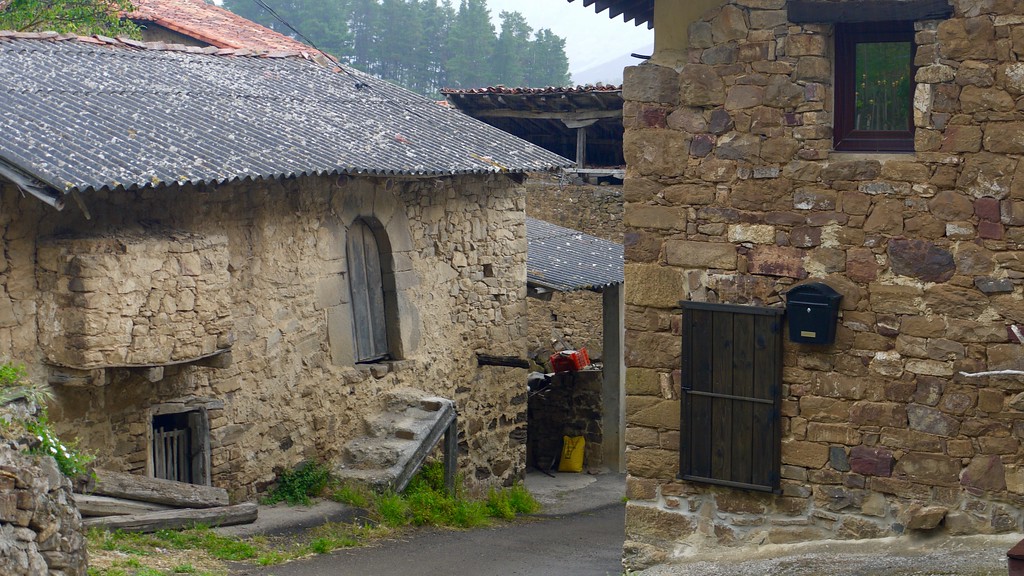 Northern Spain is known primarily for its pintxos, wines and hams. But is also know for its cheese – one of them being Cabrales cheese. Aaron had discovered a cheese cave at the northwest side of the park and we were going to go check it out.

The rain only increased as we descended through the narrow gorge and back to the more open spaces closer to the coast, reassuring us that we had made the right decision. Craig had his chance to prove his driving skills on the narrow roads and he did pretty good – for a guy. The clouds hung low over the valleys but the roads were fantastic. I spent the morning wishing I had two wheels under me instead of four, despite the wet weather. No worries – I will just have to come back!

We drove through long, green valleys until we came to the town of Las Arenas. Just on the other side of the tiny settlement was Cueva Del Queso De Cabrales, a cheese museum and caves that sat on the rocky banks of the clear Rio Cares. The rain had not let up and we dashed from the car into the cave entrance where half a dozen other people had already taken shelter. It wasn’t long before an employee came by to collect our money and then start the tour by letting us through the entrance to the cave proper. 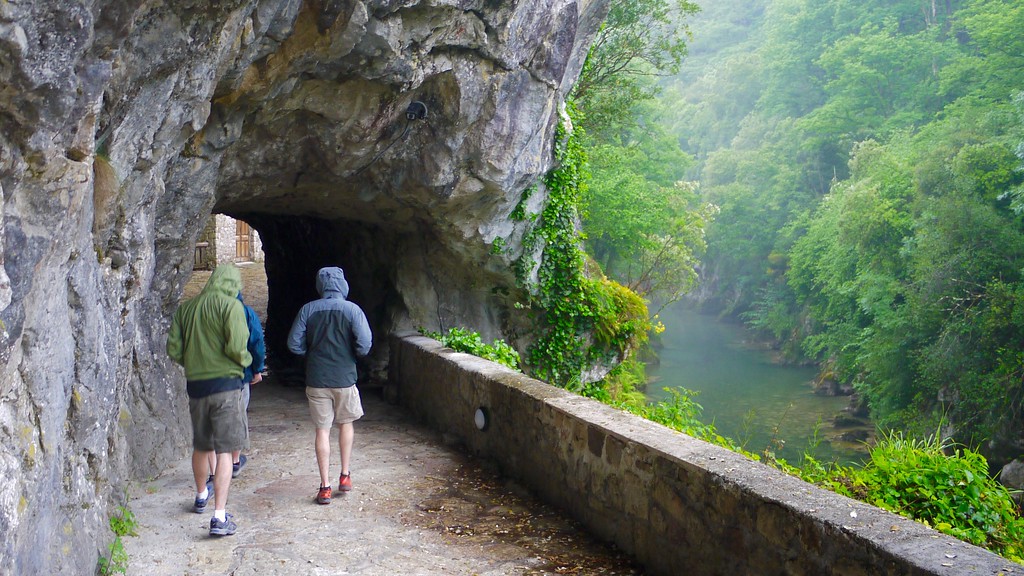 Rain falls on the Rio Cares 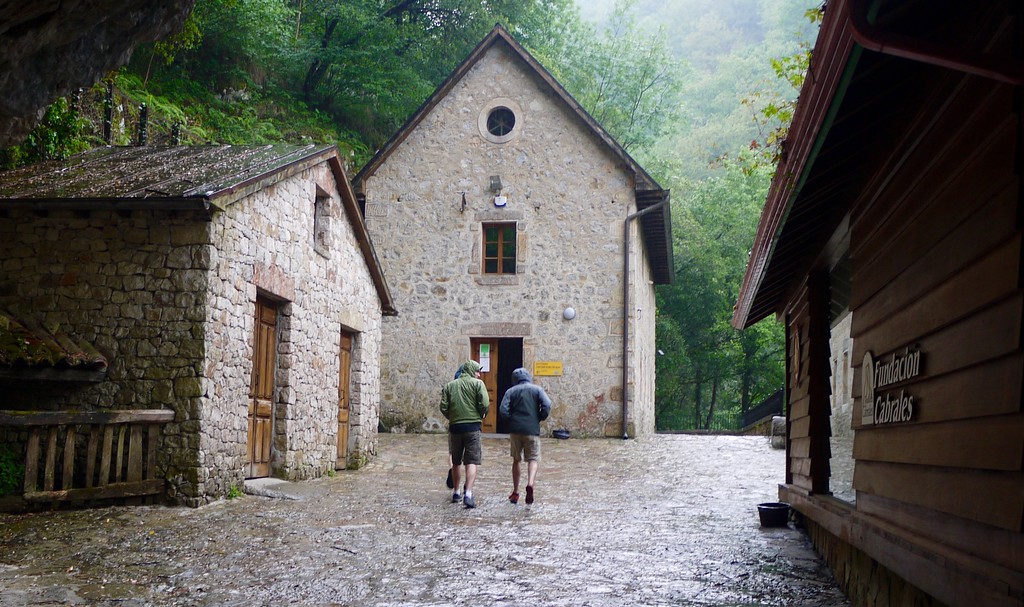 The tour consisted of a small, low ceilinged cave which was set up as a museum. Displays with various historical artifacts, articles, photos and descriptions lined the center of the cave while the ceiling and walls dripped with water and calcium deposits. It was interesting to see, but unfortunately it was all in Spanish and therefore primarily unintelligible to me. Quite of a few of the photos reminded me of the Alpine dairy culture of Switzerland, and I enjoyed seeing the various objects on the shelves and speculating what each item did. After the cave tour we watched a short movie about the production of Cabrales cheese and what makes this cheese so special. It is usually a mixture of cow, sheep and goat’s milk and aged in a way that allows for the growth of penicillium molds, making for a soft blue cheese. It is actually a protected name, similar to how Champagne can only come from the French region of Champagne, Cabrales cheese can only come from the Asturias region of Spain. After the movie was the chance to taste this cheese. I am not a fan of such strong cheeses, but the guys said that it was good and I watched how the others in our tour group react to the flavor. I was in the minority for not liking it, but I was not alone.

One of the things Dan and I speculated about during the museum tour were wooden shoes with three fat pegs stuck to the bottom of the shoe:

Image borrowed from this site

I did a little bit of research once I got home and found out more about these odd shoes. It turns out that they are called “albarcas” and are hand carved from a solid piece of wood. The three “pegs” are replaceable as they wear or are damaged. But why walk on these pegs, instead of directly on the ground? Why, because the ground is normally covered in mud, snow or poop. This is one of those things that I wish I had known at the time, so I could have appreciated the shoes a bit more while I was in their “homeland.” The photo link above has more details and photos, if you feel the need to know more.

After we left the cheese caves we set our sights on lunch. Las Arenas had looked like it might have something to our liking and it really couldn’t be more convenient to our present location. We doubled back down the hill, parked the car and took a walk along the near-empty streets.

Not many tourists today in Las Areanas 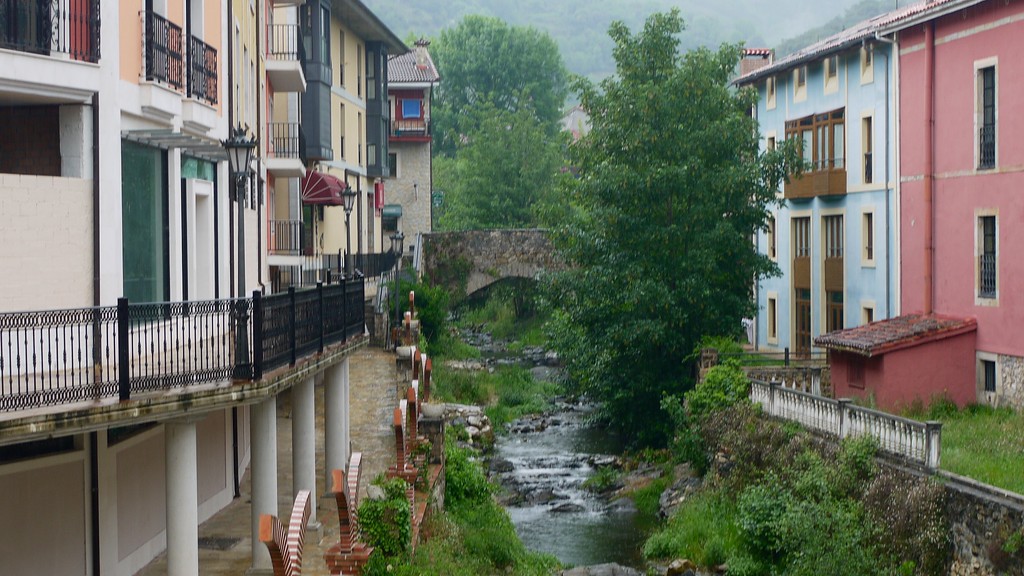 The hunt for “just the right place” was faster this time, mostly because our choices were limited and we were interested in getting out of the rain. The choice was made (it was a Sidreria, of course) and we sat down for a relaxing and tasty lunch. 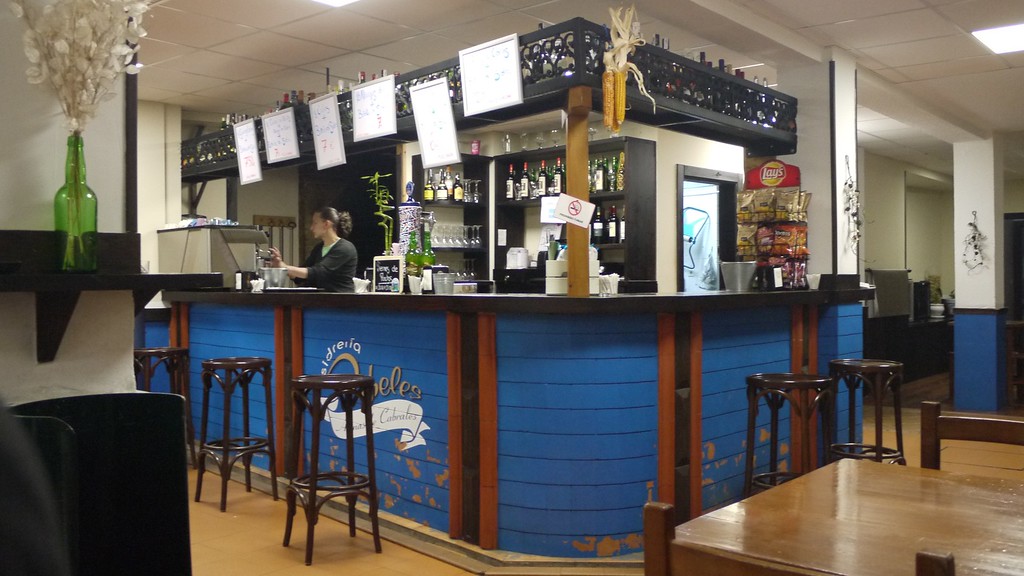 Post-lunch was a direct drive to our next destination: the coastal town of Gijón. The weather had not let up and the clouds hung low in the valleys. More fantastic motorcycle roads passed underneath our car’s tires as we made the journey north. 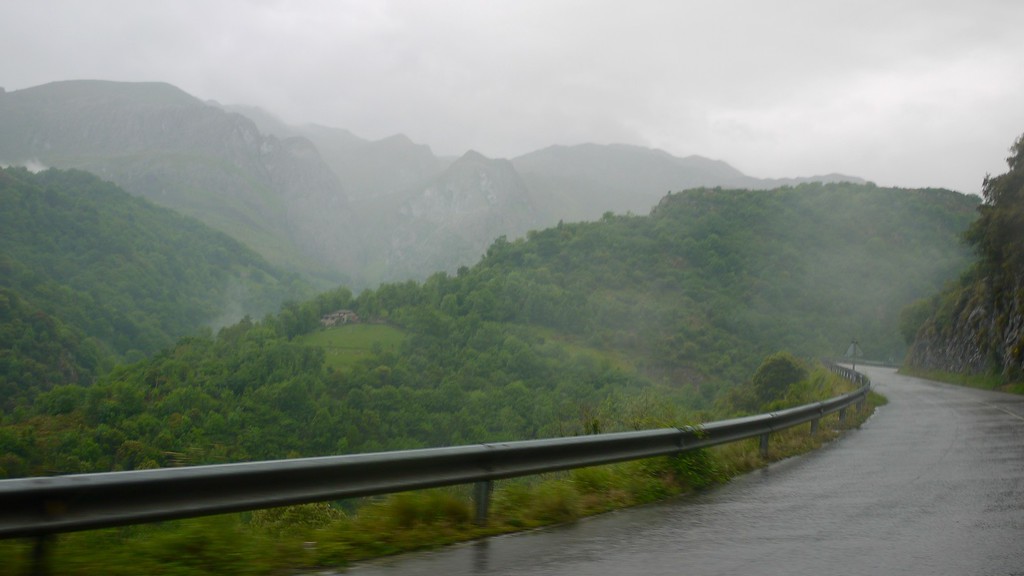 So far our accommodations had been pre-arranged, but since our time in Armaño had been flexible, we had not made further reservations in case we stayed longer. We looked up an AirBnB online and found one fairly centrally located and inexpensive in Gijón. I knew that it would not be fancy, but we just needed somewhere to base out of while we explored the city.

The rain forecasted for the mountains had followed us to the coast and our first steps in our new city were wet ones. After we finally met up with our AirBnB host (she had gone to the wrong address!) and unloaded our bags we planned to go back out and explore.

The view from our AirBnb

The history of Gijón, like many Spanish cities, dates back to pre-Roman times, although the time of the Roman occupation was the most in evidence. The current architecture is a huge variety of neo-classical buildings, traditional styles from the early 1900’s and modern glass buildings. Naturally, I found the older buildings much more interesting to look at.

Gijón in the rain

Beautiful details in the architecture

Marina on the Atlantic 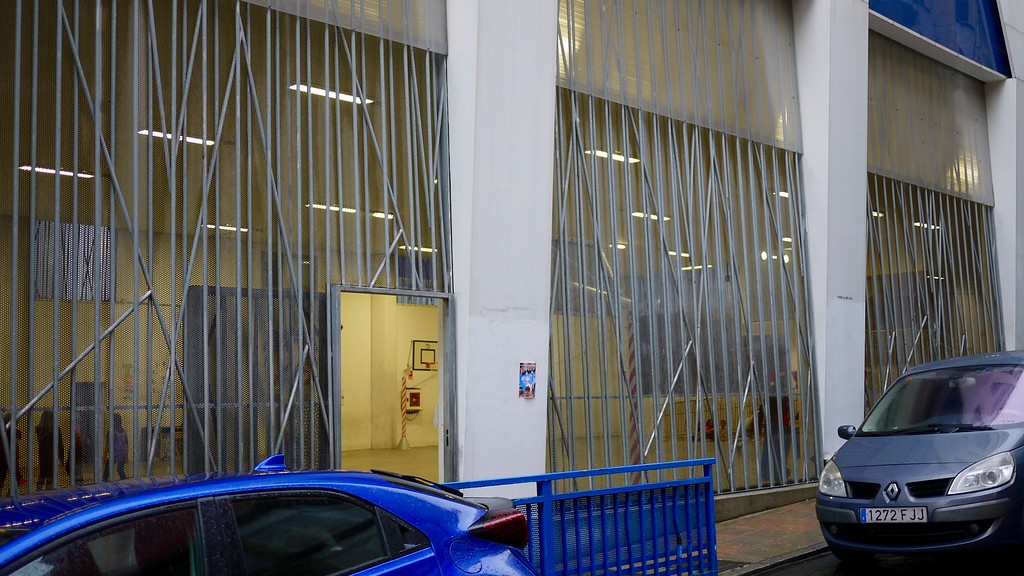 While we didn’t spend much on our accommodations, that was not going to be the same story for dinner. Aaron had picked out a well-reviewed restaurant, the Tierra Astur. On our way to reach the restaurant, the heavens opened up and the rain came down heavy, pushed along by a strong wind. By the time we found the entrance we were soaked.

Some towns celebrate with a Christmas tree. Gijón created a siedra tree!

After a good meal (and a few artfully poured glasses of siedra) we saw that the rain had (almost) abated and took advantage of the relatively good weather to explore some more. On the eastern side of the beach, passed the marina, was a high green promontory. The walk there was not long but there was not much to see once we gained the height of the hill. There was a nice skate park, the tidy ruins of some old military barracks, and a basketball court. It was a nice view across the ocean though, and it had been a good post-dinner stroll.

Making our way home in the damp twilight 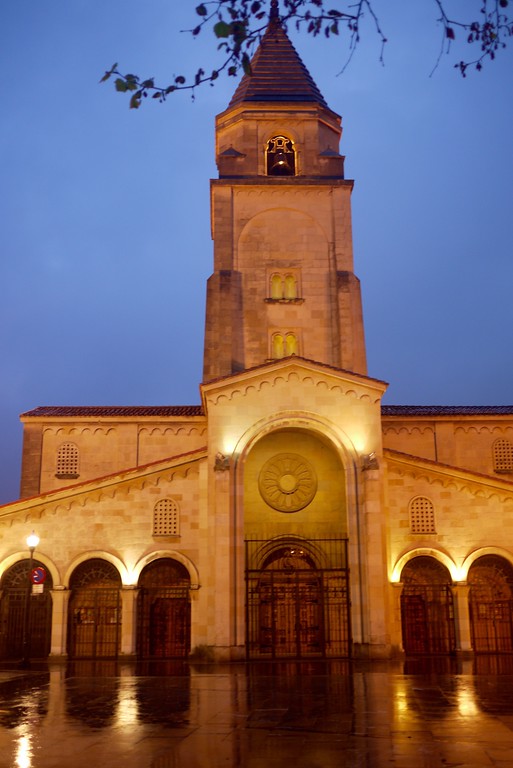 But not without one more stop for siedra!