Today would be mountain pass day! I was so excited about today’s ride: we would be crossing over the Great Saint Bernard Pass. I haven’t been on this pass before, and there was even some question as to whether the end of the day would change that: the pass was due to open today (June 1st), but I could not find anything conclusive online that the road was indeed open. Oh well – we’d head in that direction and make some last-minute changes if needed. Let’s go!

Fortunately not much traffic on the narrow roads 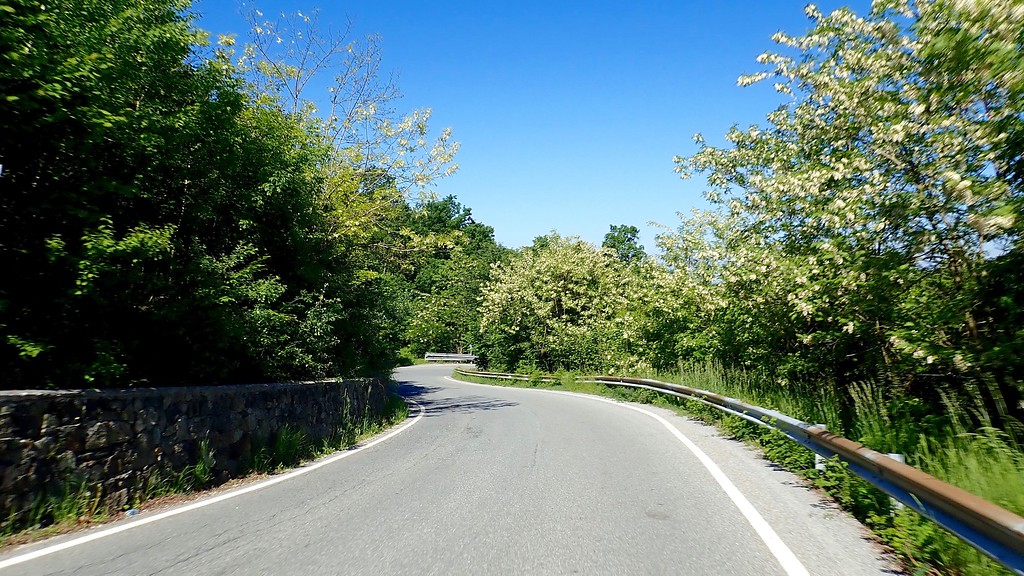 This was nice riding 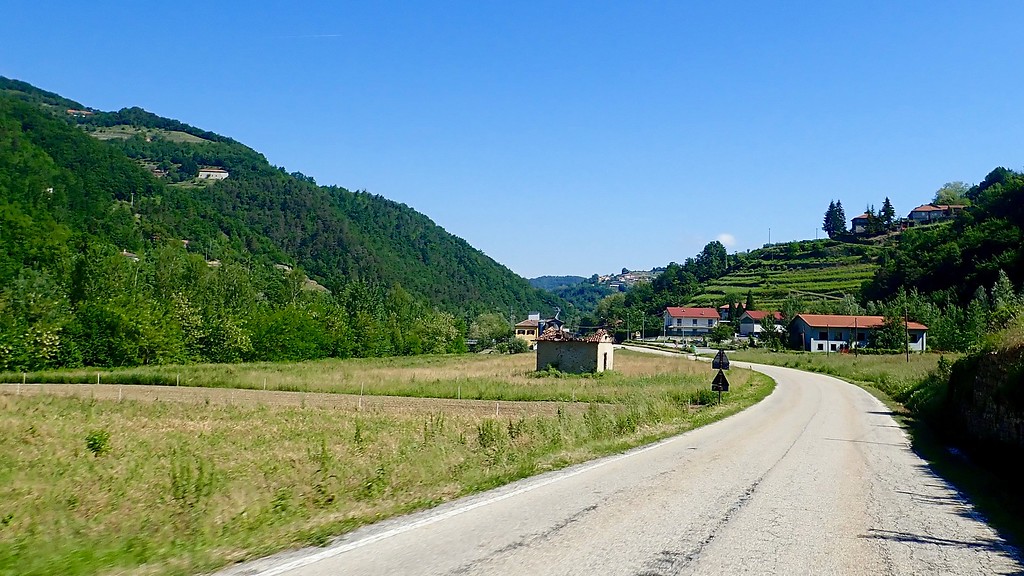 Mountain riding is where its at. I enjoyed our morning’s trek into the mountains and north towards home.

We crossed the “basin” around Turin and then re-entered the mountains. It felt good to know that the rest of the day would be on curvy roads and with beautiful scenery. 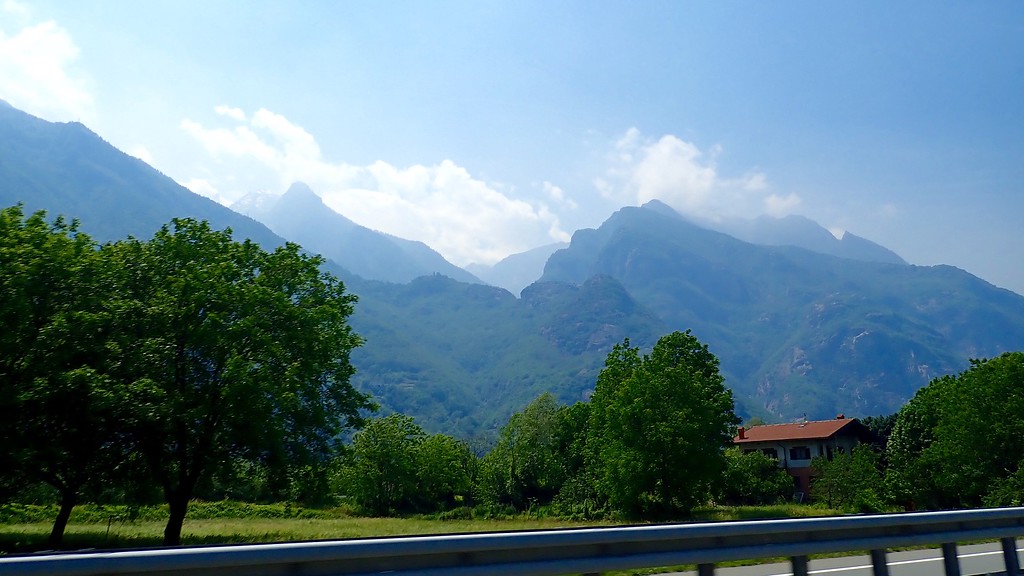 This area (near Aosta, Italy) requires a return visit! 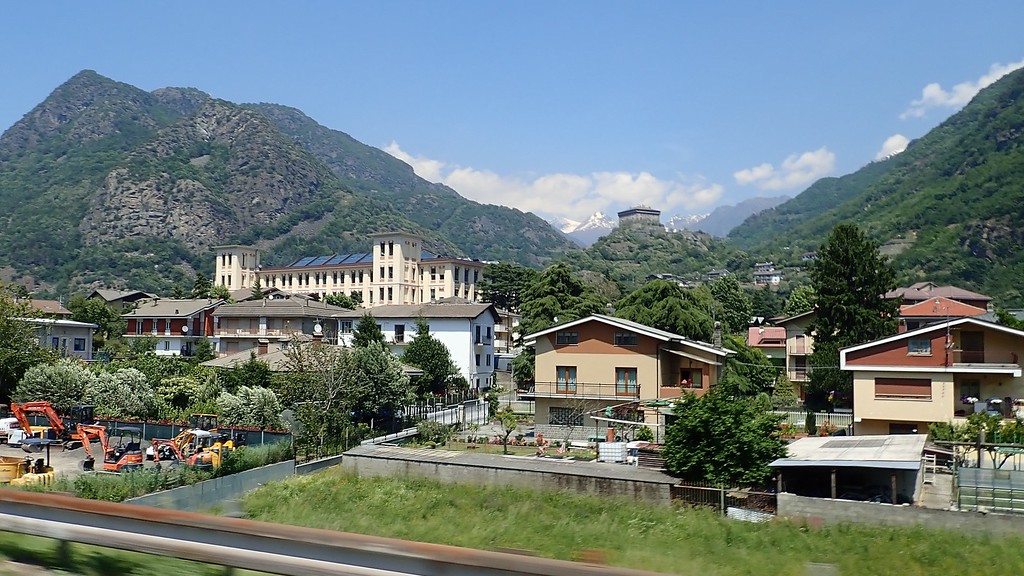 We had turned off the main road (E25) and were heading for the Great Saint Bernard Pass. The road got narrower and threaded its way through mountain villages.

We decided to stop for gas before actually getting to the pass, but by the time we found a station, we were at the place where the road would cross over the pass – or not. I had seen signs just a few meters before that gave me the distinct impression that the pass itself was closed. The “Road Closed” sign was a big indicator. Much to my surprise, though, I realized that there is also a tunnel that goes under the pass. At least we would not have to find another way around the mountain.

Not willing to give in so easily, I approached a couple of motorcyclists and asked what they knew of the pass closure. They confirmed that it was indeed closed, but “they heard” that there “might” be a way through anyway. It sounded sketchy, but like a fun adventure to find out if this was true! I went back to Dan and relayed the information. “Nah, let’s just take the tunnel”. Fine Mr Fun Bags, we’ll do it your way. But if it had been just me, I think I would have joined the other riders and checked out the conditions myself.

We finished filling up Dan’s bike and headed for the tunnel.

There was a massive space underground at the ticket booth.

Not a bad idea to keep an ambulance up here 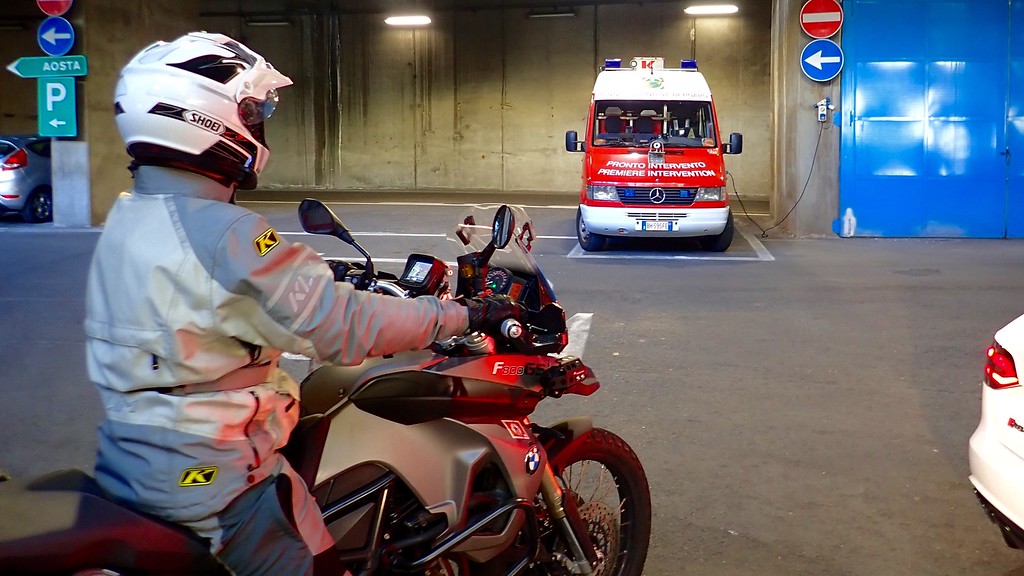 The tunnel was short and unimpressive. Apparently we lucked out by only having one car in line in front of us, as I understand that the wait times to get through the tunnel can be quite long. Bah – tunnels. I still wanted to know what the pass was like! I will just make plans to come back some day.

The other side – Switzerland! 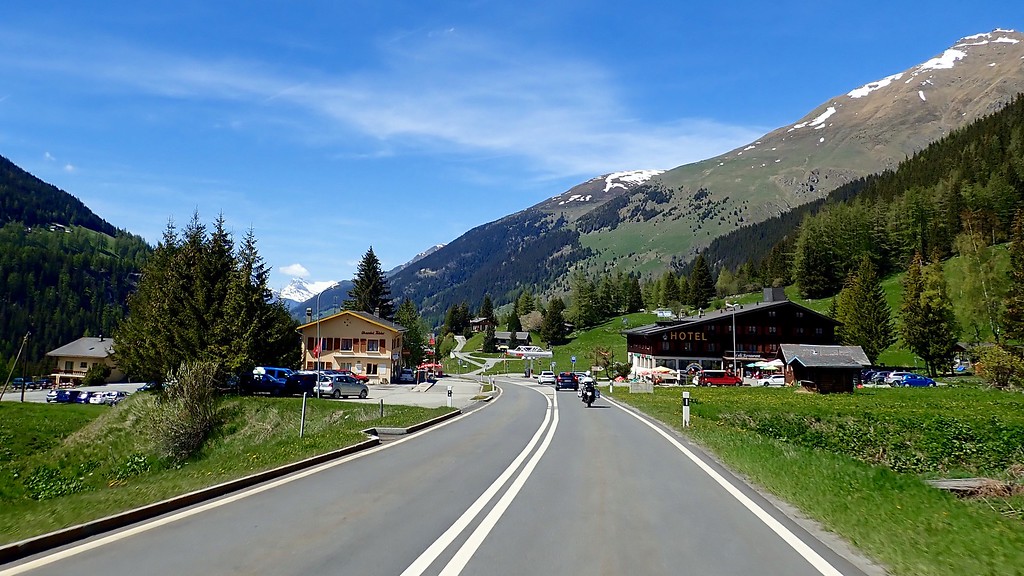 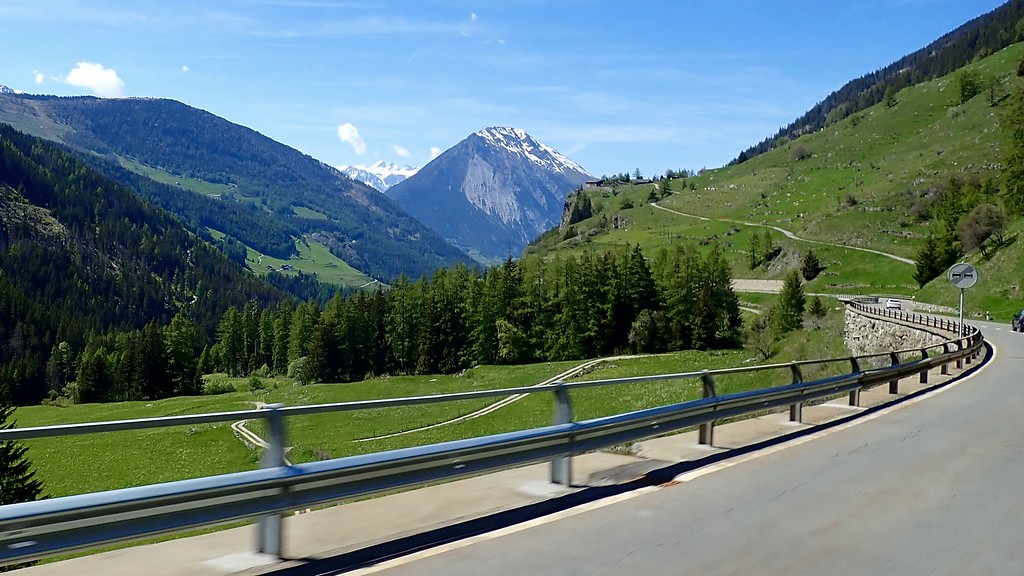 There is something special about Swiss roads and scenery

I had Dan lead for a while 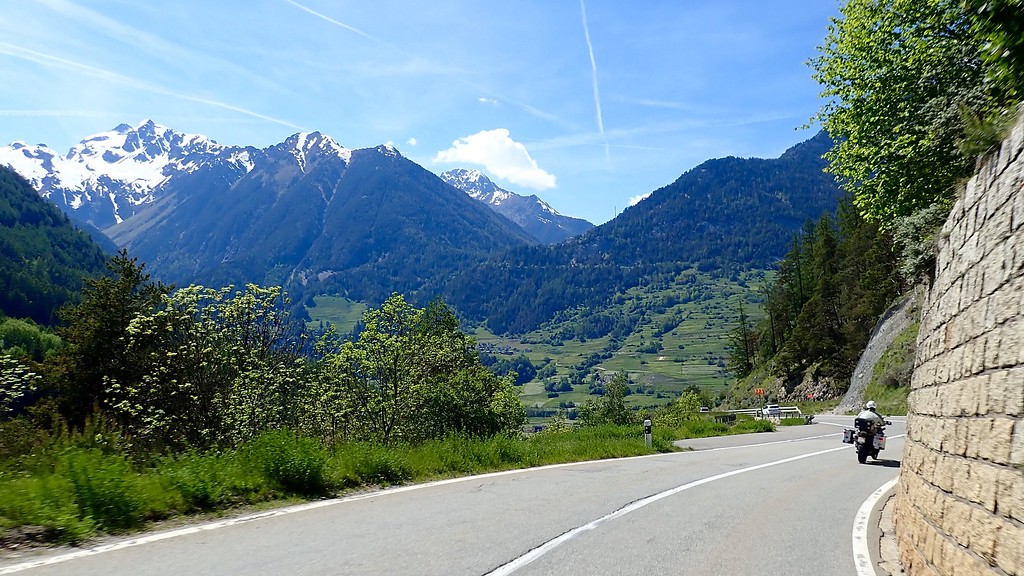 We descended to Martigny and found our hotel. We could have easily made it all the way back to Basel tonight, but why push it when we have the time? This way we could have a nice night’s sleep and a casual ride home, getting back to Basel early in the day to have time to unwind and prepare for the work week.

Hotel Forum (there is a Roman forum nearby)

We walked around the center of Martigny for a bit, checking out our restaurant options for dinner and getting a sense of what the town is like. I had only been here – briefly – once before, I remember it only as being “hot” and not a place I would want to linger. Tonight it was much more pleasant.

During the search for a restaurant, I saw the same motorcyclists I’d seen at the start of the pass. I walked over to them and asked how their adventure went. They confirmed that the pass is not only closed, but impassible. They had to turn around and come back and take the tunnel as well. Ok Dan – you win this time!

We had really good burgers at Beefore Burgers and were brought abruptly back to reality with the Swiss prices that went along with those burgers. Oh well – that is the price for living in such a wonderful place. 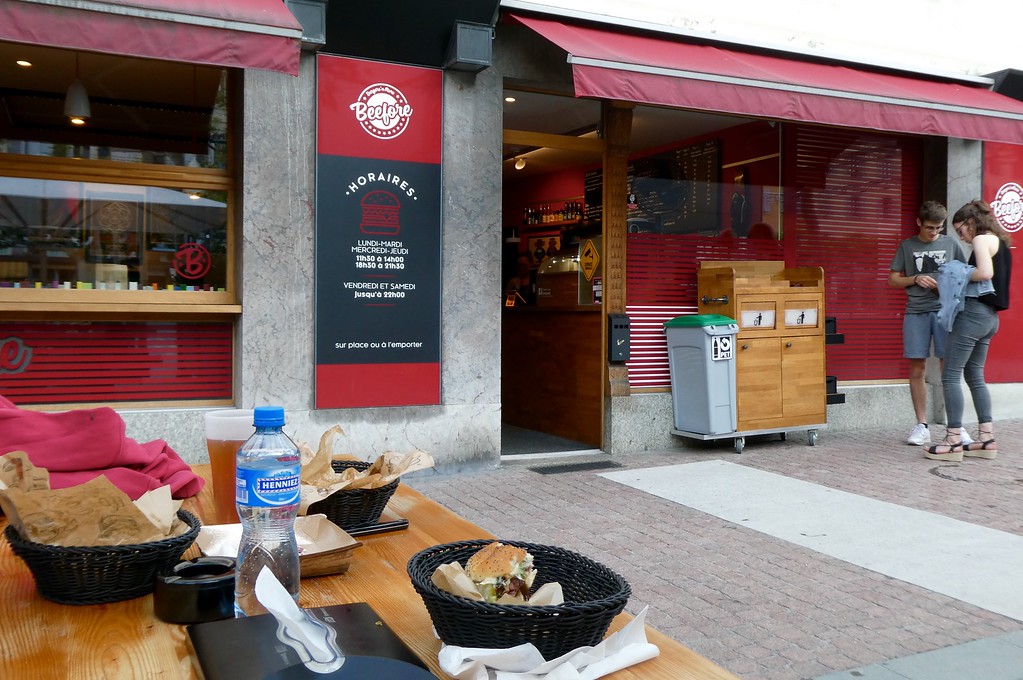 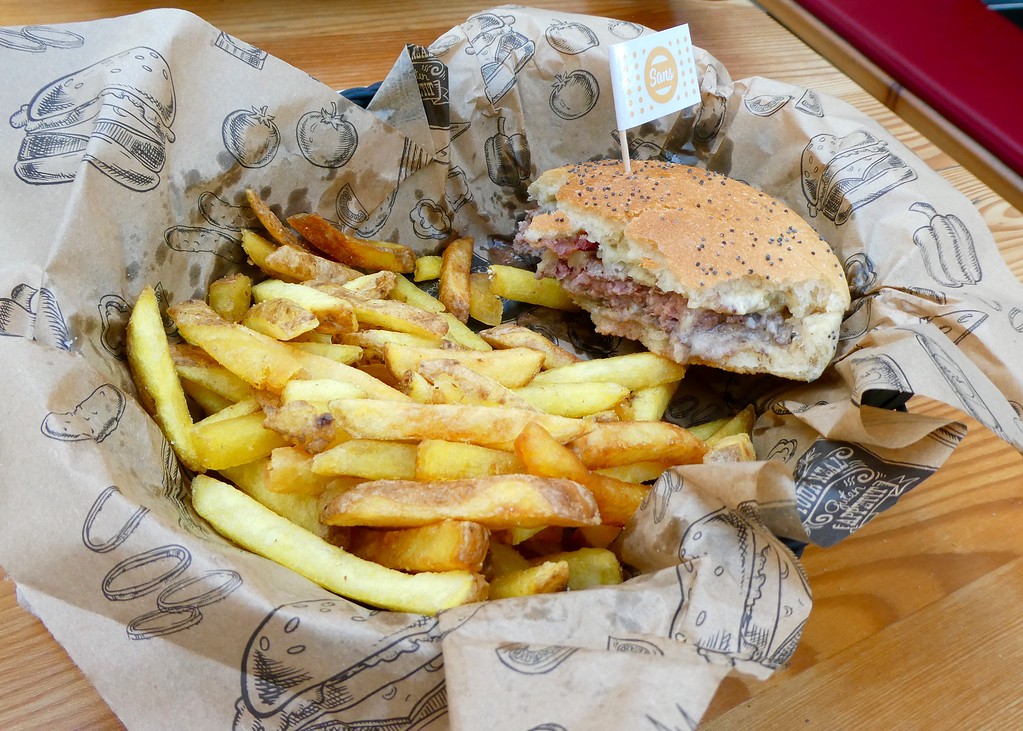 We returned to our hotel via some back streets and enjoyed our last night on the road.