The rolling hills of Tuscany had been pretty high on my bucket list for a few years now, but I had resisted heading in that direction because of the summer heat. Usually when we had time to go, it was the height of summer. But this time it was perfect: the last week of May was chock full of holidays so with minimal vacation time, we booked ourselves for a week’s holiday in the Italian hills.

Our first day was a short day. We slipped south into the Alps and to the tiny town of Kandersteg. It wasn’t yet June, so not all of the mountain passes were open. Instead of riding around the mountains, I chose a route that would take us through them – literally.

Riding into the Alps 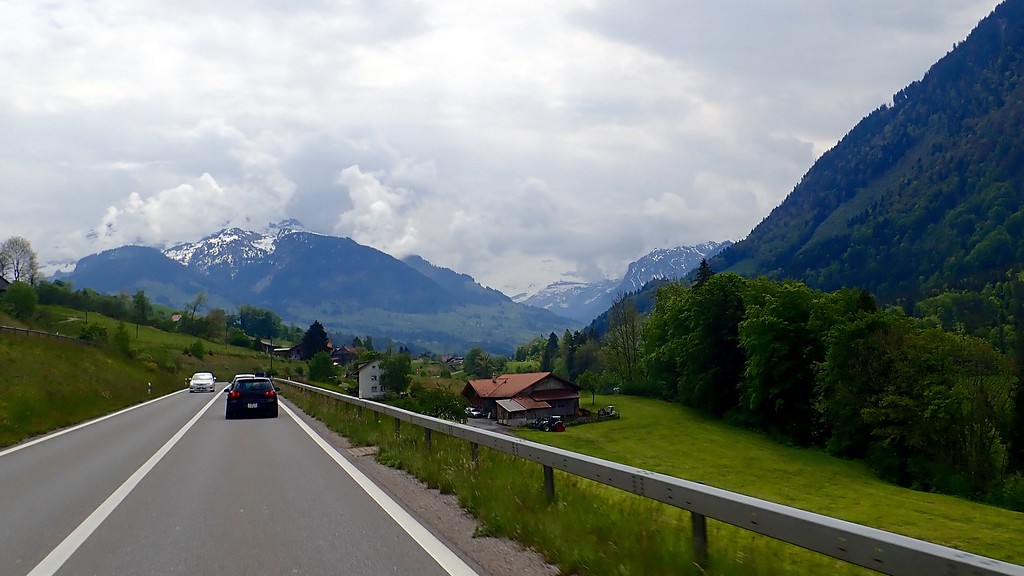 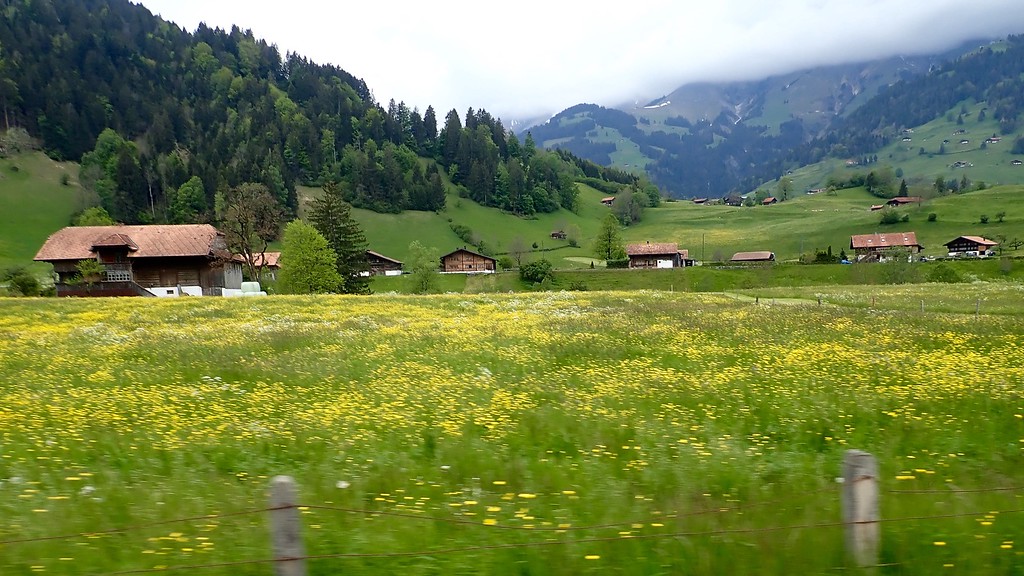 I had scoped out the auto train between the villages of Kandersteg and Goppenstein, a route that would cut directly through sixteen kilometers of ancient granite. The disappointment of riding over the pass would be replaced by the novelty of the train ride. I had never been on an auto train before, but I assumed that it would be a lot like putting the bike on a ferry.

Waiting for the train 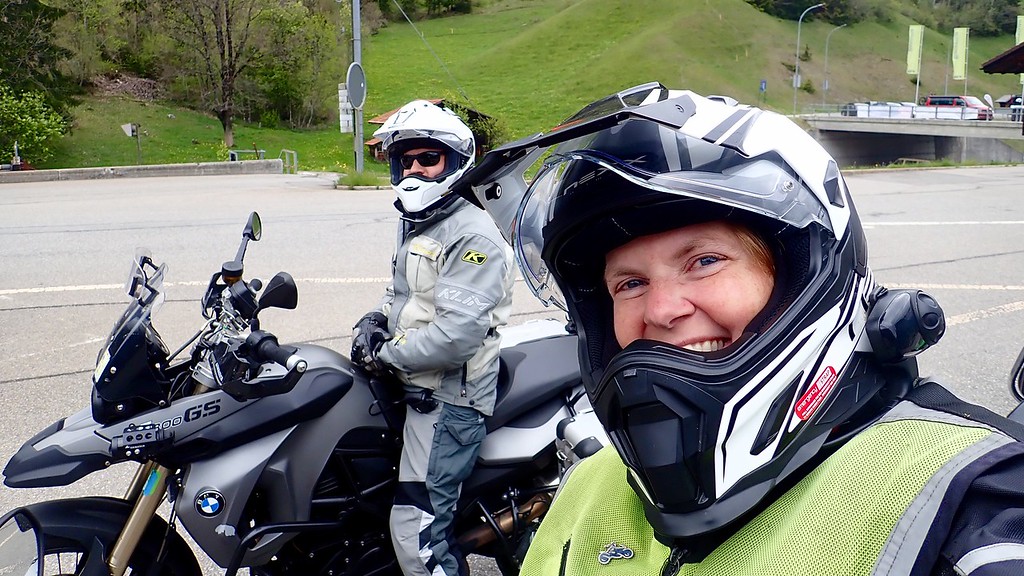 The train has arrived and is about to unload 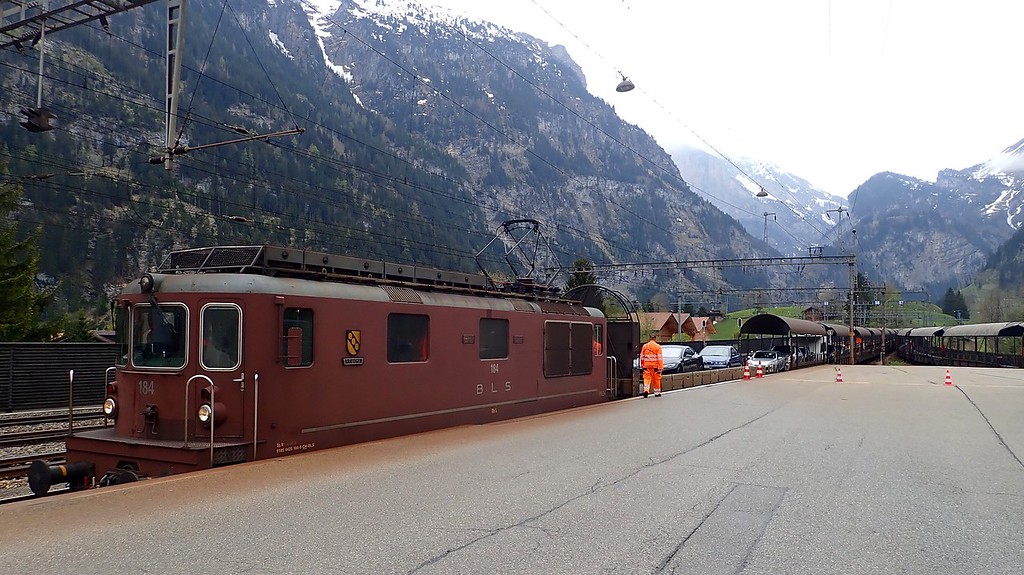 It hadn’t been a long wait at all – we had timed it really well. I’d take the credit for that, but it was really just luck. We watched the cars unload and then we were directed to “board” the train. There were a couple of other bikes behind us, and to be honest it would have been nice to follow someone who had done this before, but instead, I directed Dan to go first. 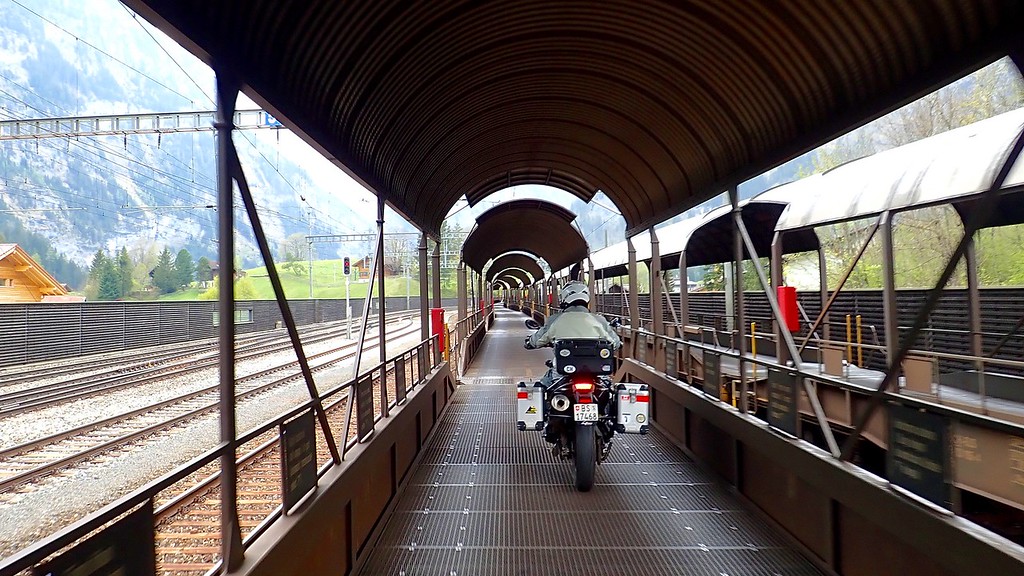 We traveled for quite a few empty carriages before we came to the motorcycle carriage. It was fully enclosed and had tie down points, and at the far end was a separate sitting area. While the car drivers had to sit in their cars for the journey, we would ride in style!

A few more bikes had joined us

There were more bikes than tie down points, so Dan and I just wedged our bikes into place and hoped for a smooth ride. The other riders were friendly but generally kept to themselves for the duration. I sat back to enjoy the view – just kidding. It was fifteen minutes of external blackness and no wi-fi. It was a nice bit of “forced relaxation”.

Map of the train connections in the seating carriage

Because we had wedged our bikes in so tightly getting into the carriage, it was a bit of Tetris to get the bikes back out. The other riders were helpful in juggling the space, and Dan made sure to help direct the riders as they came out of the carriage, as the angle of exit was a little tight for some of the wider bikes.

No problems for this bike to exit!

Our bikes reflected in the seating carriage window 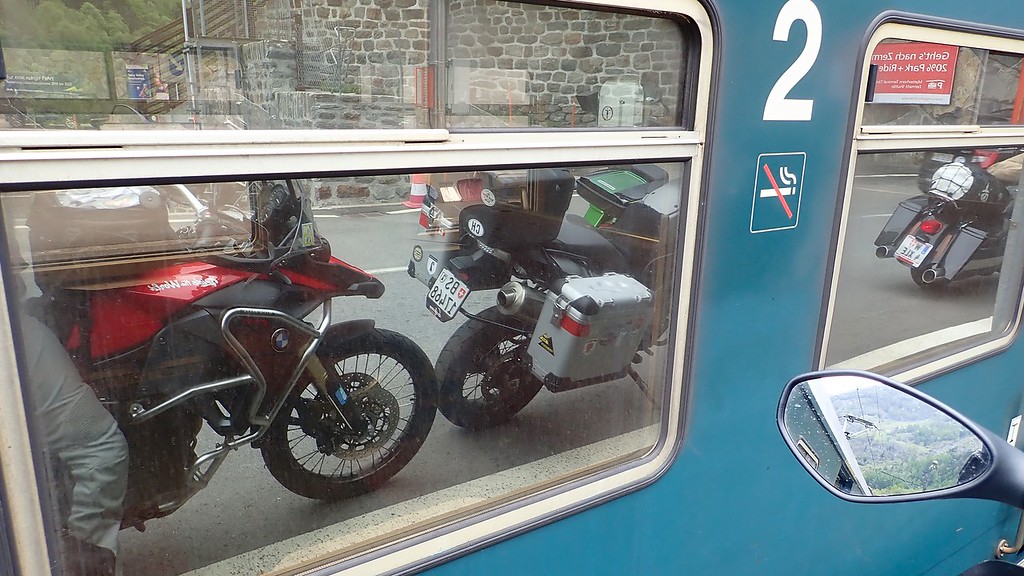 Welcome to the southern side of the Alps

We zipped down one side of the valley and up the other. A light drizzle was falling but it felt so good, I didn’t mind. We were heading for Simplon Pass – and Italy!

Looking up the valley from above Brig

Still a bit of snow on Simplon Pass

Simplon Hospice, built in 1801 on the orders of Napoleon

Prepare for the descent!

That light drizzle? Yeah, it became a steady rain

The southern side of Simplon Pass is quite dramatic

The rain lets up south of Domodossola 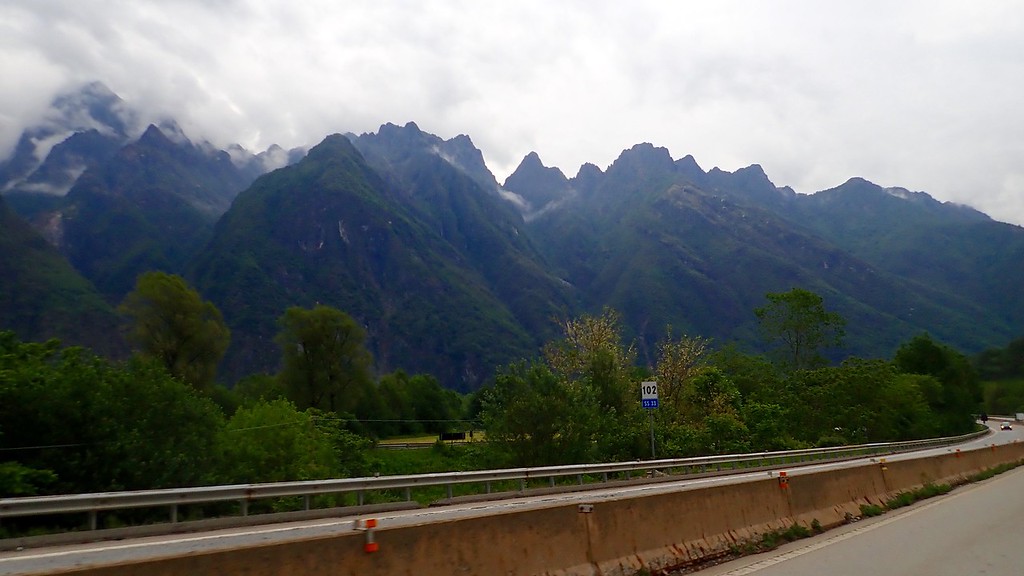 The road south of Simplon was slow with rain and traffic, but once we hit the main motorway the clouds lifted and the traffic thinned. We were on the home stretch for our first holiday stop.

A quick stop in Baveno to check directions

I had arranged to stay in the town of Stresa, Italy, on the shores of Lake Maggiore. This was another “bucket list” location that I had heard great things about and was excited to finally see. We parked the bikes at the waterfront while we looked for our hotel – I had reserved rooms at Hotel Elena, in the heart of the pedestrian zone.

I was checking out the area in Street View before we left home and found this: 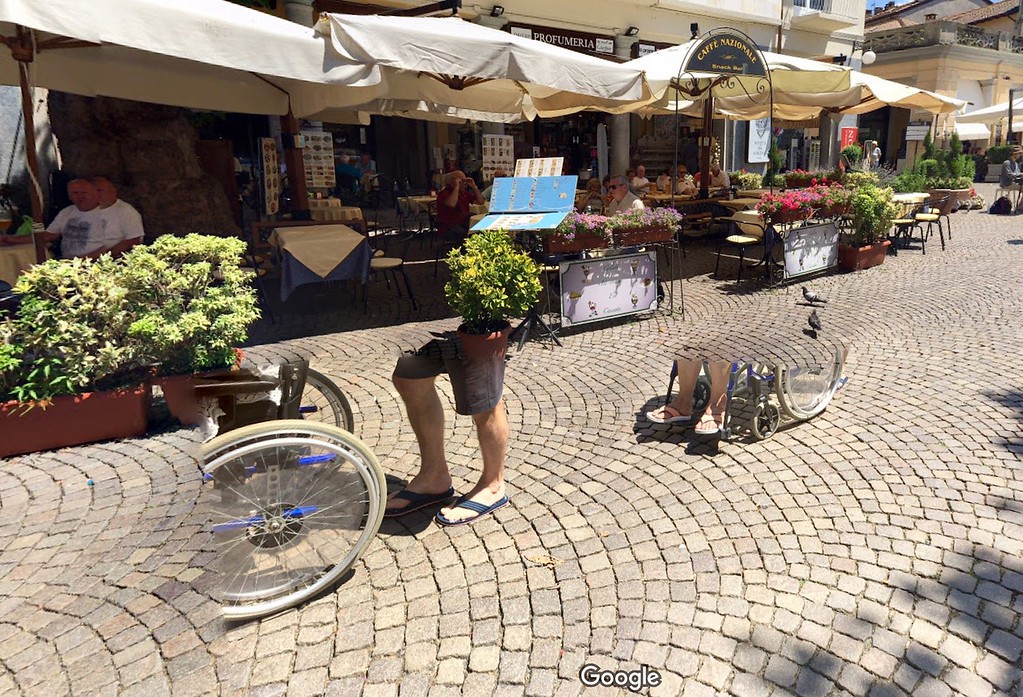 Our hotel was about as central as you could get, yet it was still quiet and comfortable – and affordable. We were able to park our motorcycles just behind the building and hauled our gear into the tiny elevator. Our room had a view over the piazza and one of the local churches. It was perfect for our needs.

Chiming bells from our hotel room 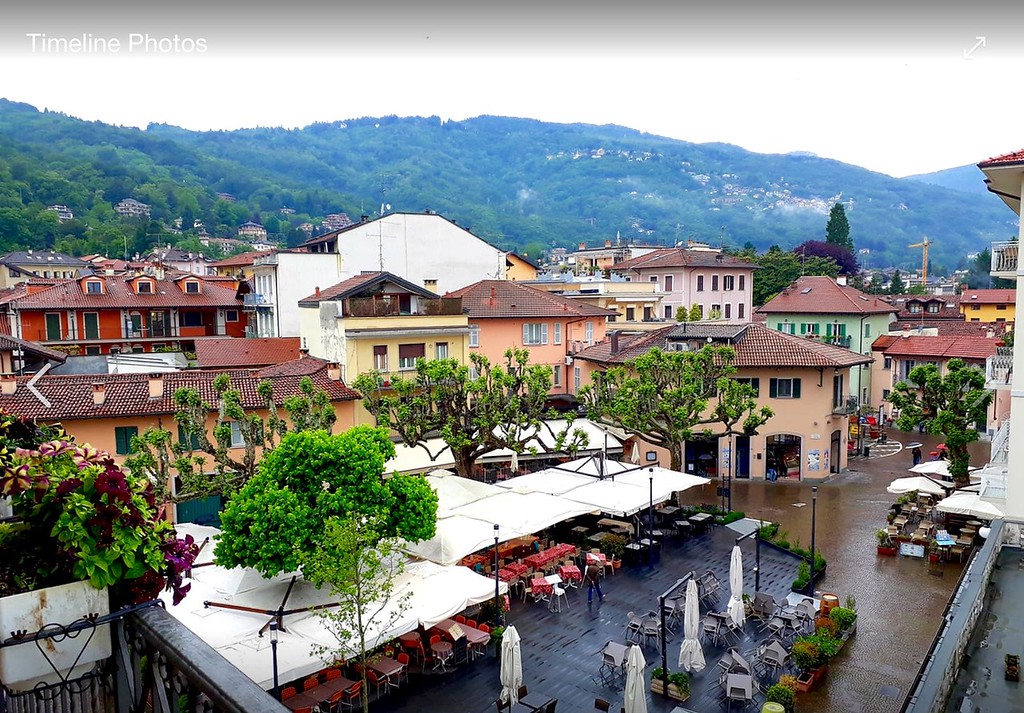 We changed and went out to explore the town for the few hours we had left in the day. It isn’t a big place by any stretch of the imagination so we poked our heads down every street and alley we came across. It was a lively, albeit touristy, place. I haven’t heard so many American accents since my last trip to the U.S.!

It really is “the White Store”

Market stalls near the lake’s edge

The damp evening didn’t lend well to much exploration along the waterfront, so we found something to eat and made our preparations for tomorrow: Isola Bella. 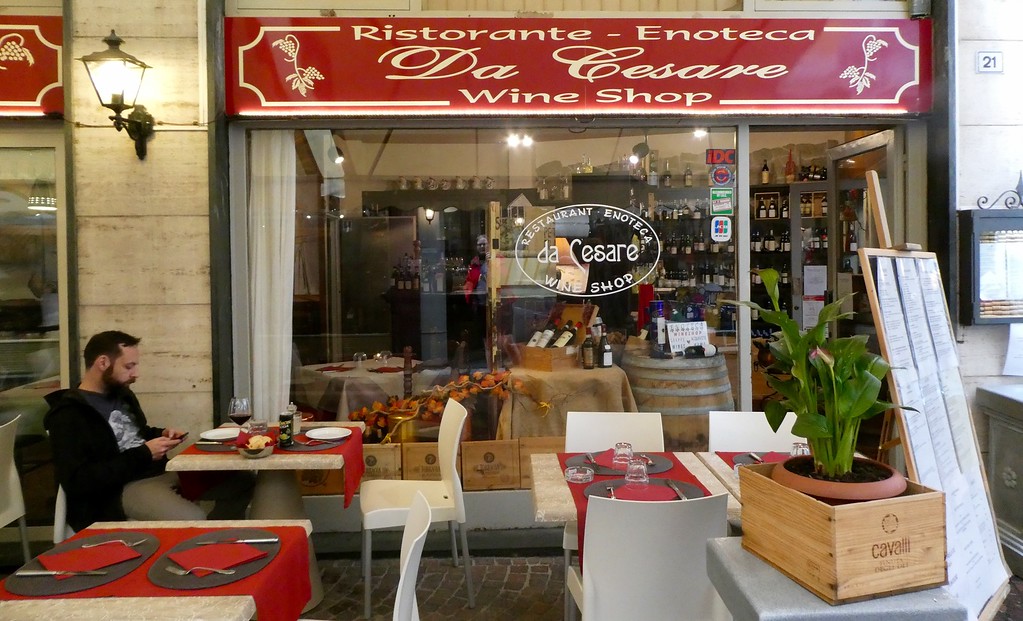