The sun shone brightly on our rain-washed bikes – it was time to explore! I had looked at a map of the region and, with a couple of recommendations of places to see, I made a general route for the day. I knew nothing about what we’d encounter, nor what kind of riding conditions we could expect. It would be an adventure!

We headed east along the Arno river – which appeared to be running very high. I suspect that Italy had had a lot of rain recently 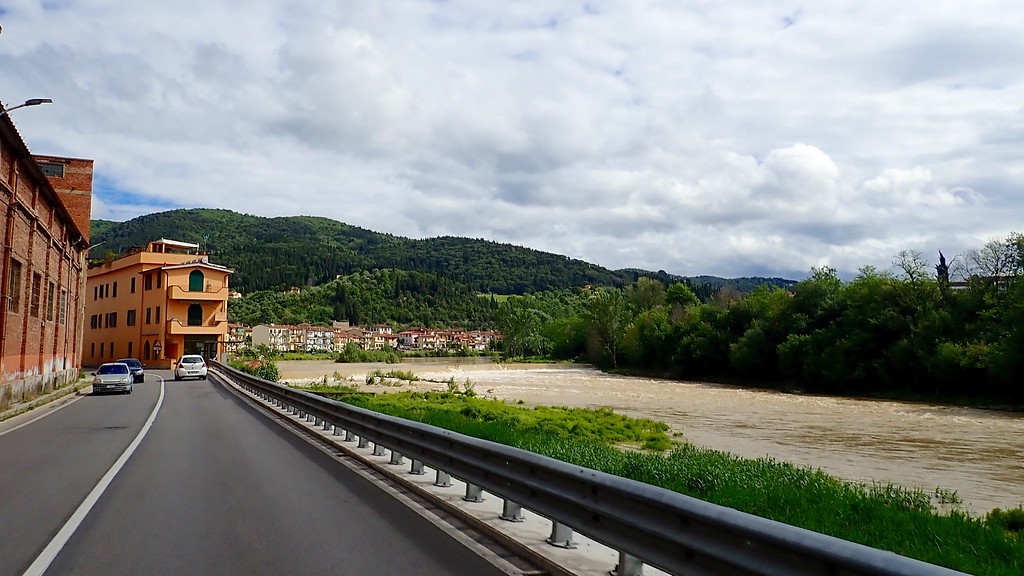 I admit that I did a little bit of snooping on the internet and found a village (Saltino, pop. 32) on a mountainside that looked like it would give a wonderful view across the valley. I always enjoy the perspective that being up high gives you, so I lead us up through a forest, the road curving tightly through the dark trees. We were in Riserva Naturale Statale Biogenetica di Vallombrosa, a large natural park. The temperatures dropped as we ascended – and we ascended for quite some time! Still, i was looking forward to surprising Dan with the overlook and we rode on through an increasing layer of mist. 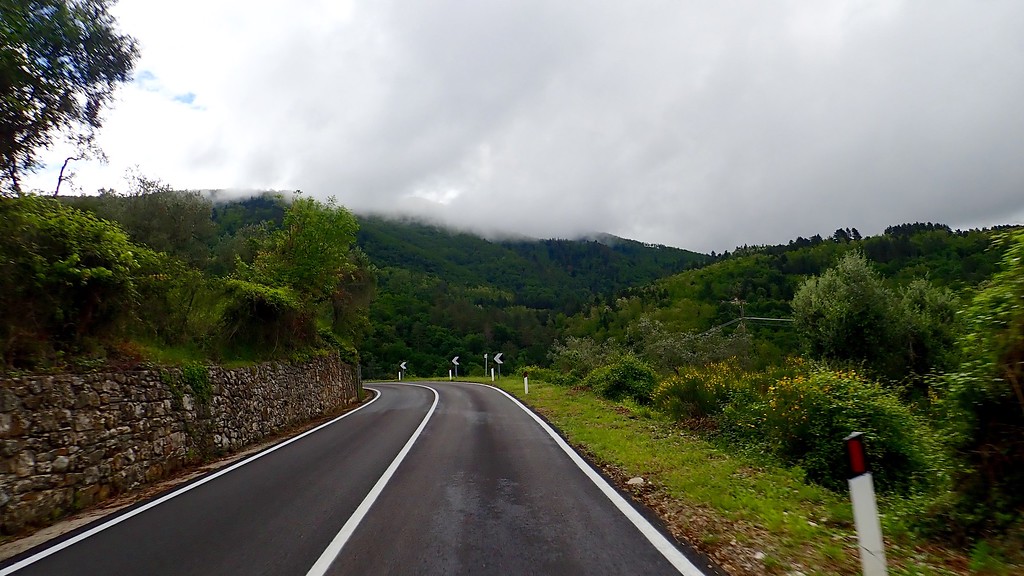 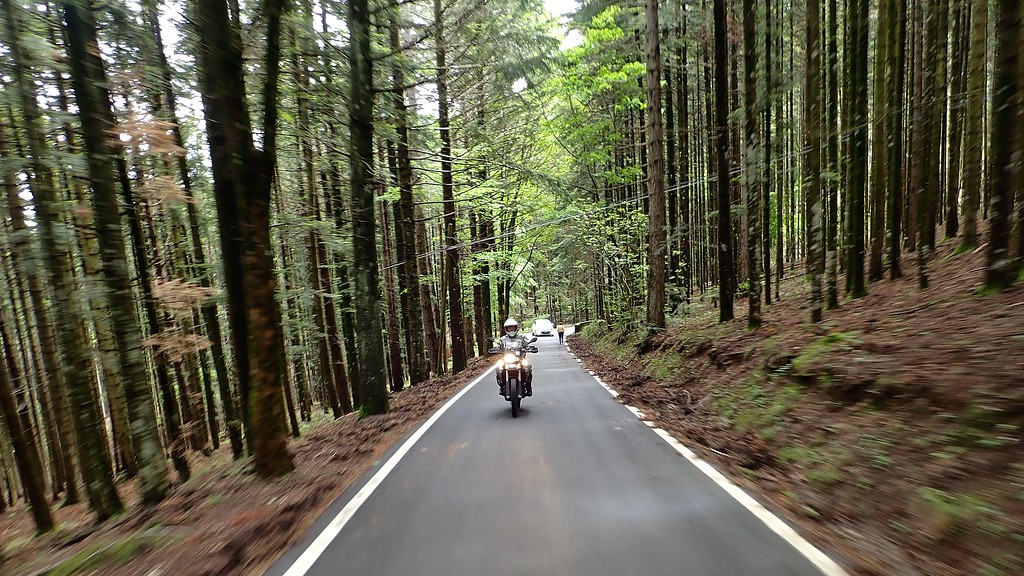 The view was not to be found. We had ridden high enough that we were now in the a layer of clouds the hid everything but the nearby trees from view. I could see, through thin pockets, that there was great potential for a view, but it wasn’t happening now. We got back on the bikes and rode back down the mountain. 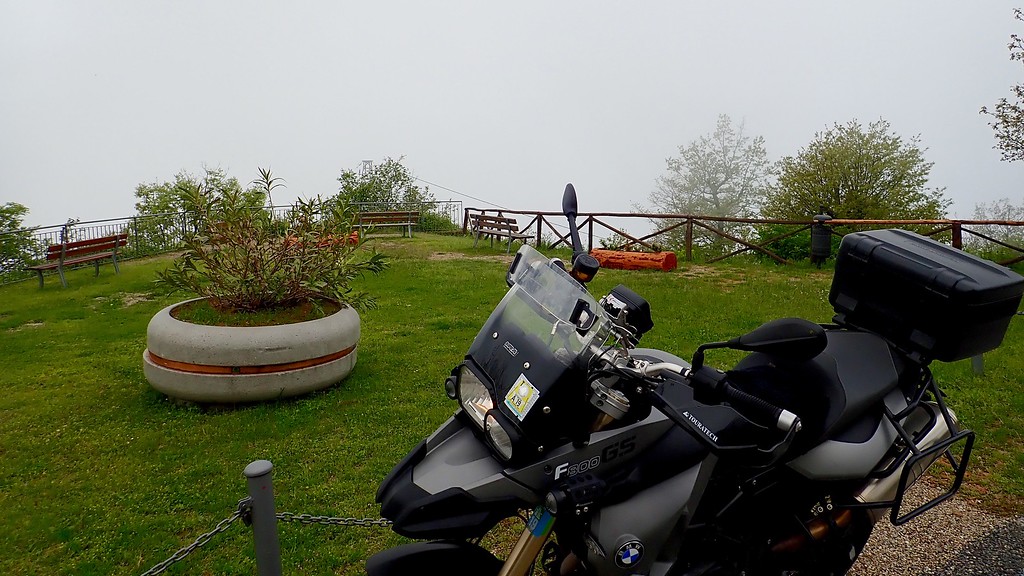 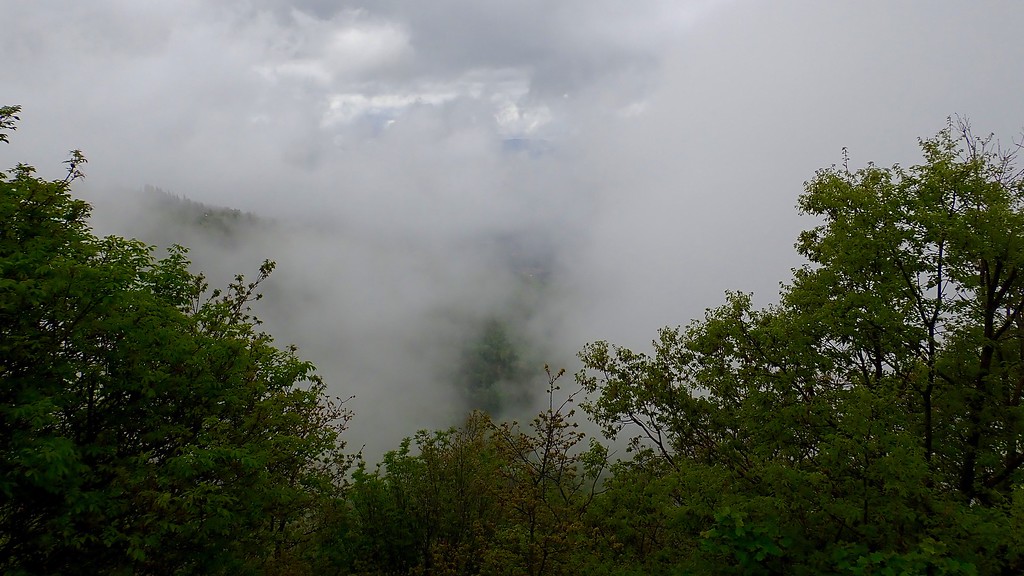 A couple of recommendations of “must-see!” towns were on our list, but because we wanted to be sure to have time to spend exploring, I had made a route that would not overload our time. We were heading for San Gimignano, after a slight detour through Greve in Chianti. Having no real idea what we’d find, I was sure that we would not be disappointed.

Vineyards and olive trees were the dominant sight for the next couple of hours. Large clusters of ancient stone buildings periodically graced the top of green hills. The road passed through sparse villages and the roads were mostly empty. 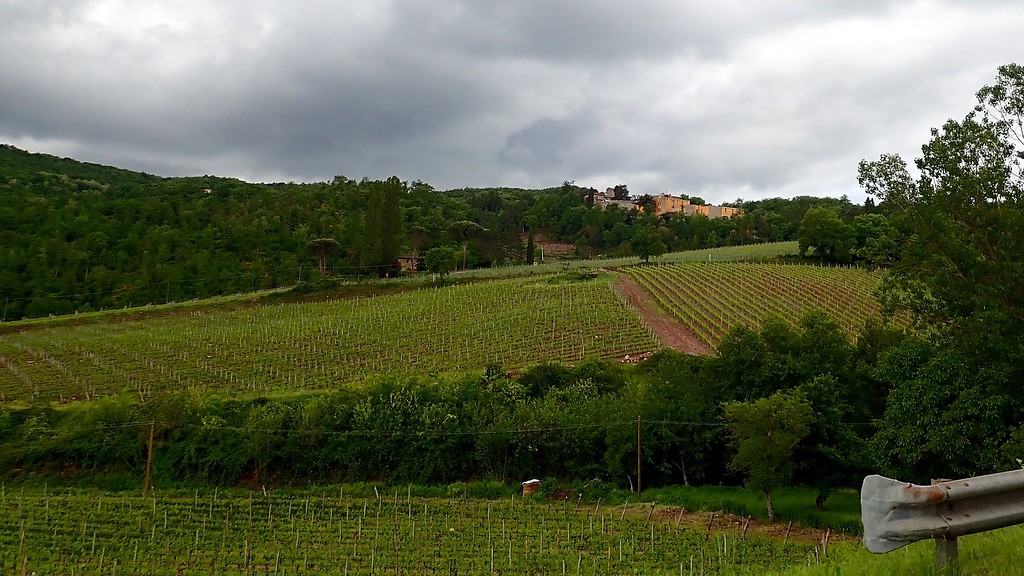 We took a saunter around Greve’s square 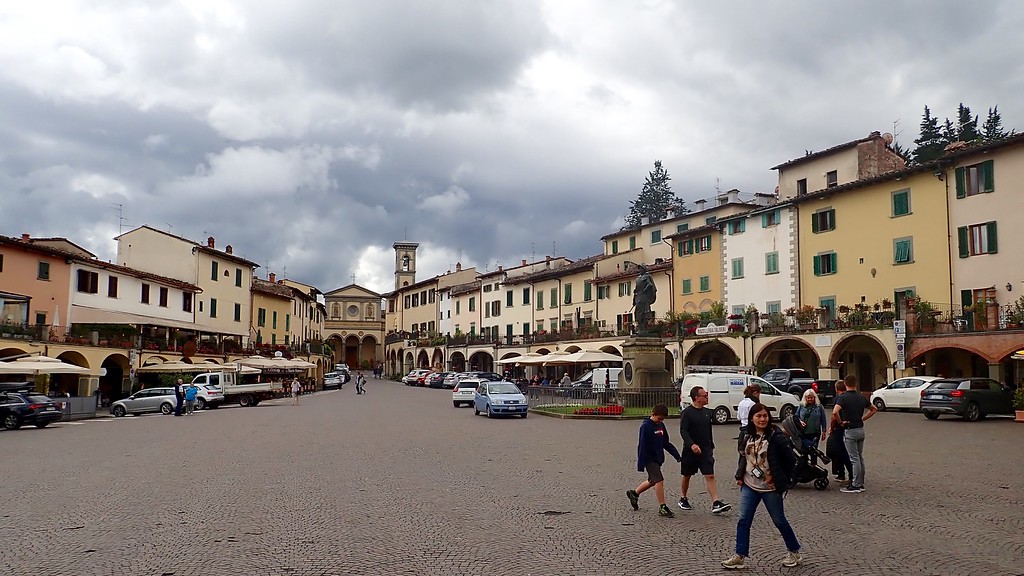 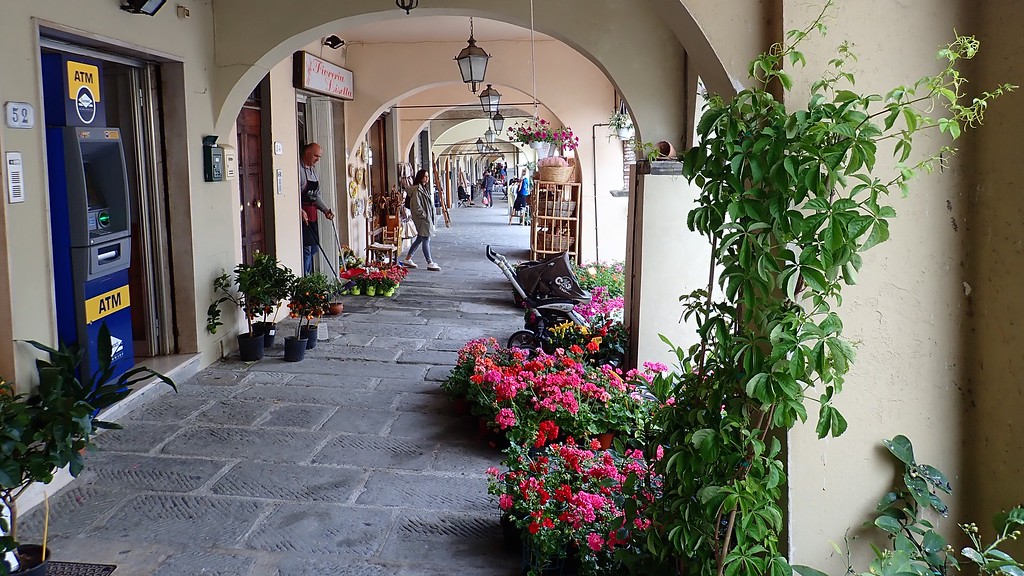 The roads after Greve became much more interesting, and the light rains we had encountered eventually cleared up to leave behind just a layer of clouds. 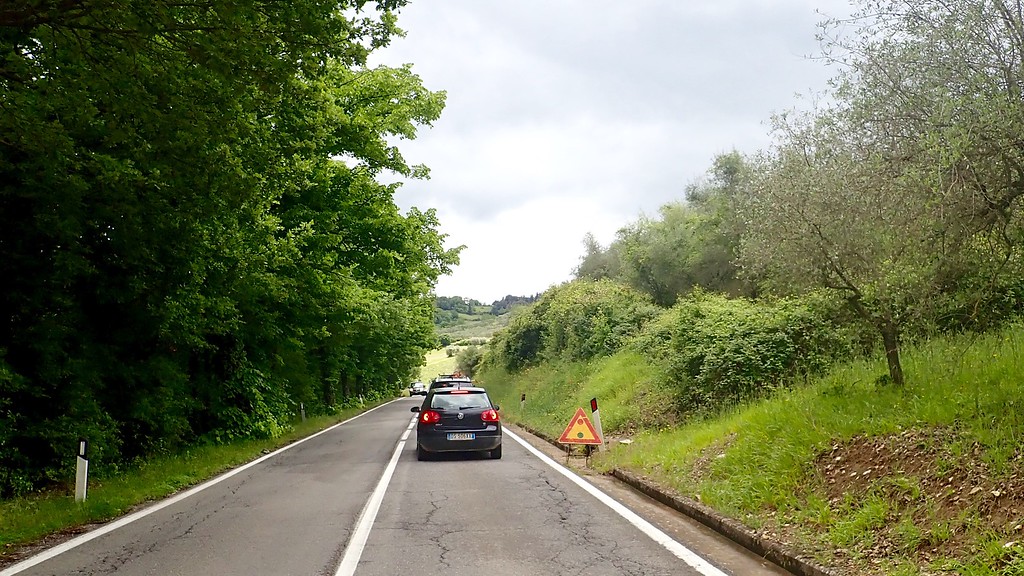 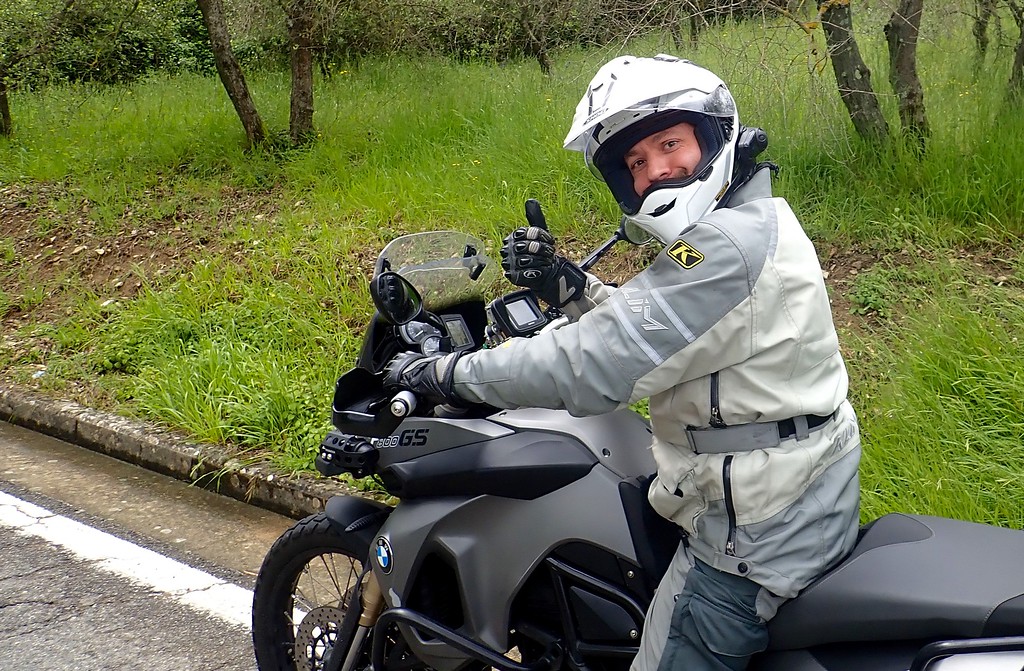 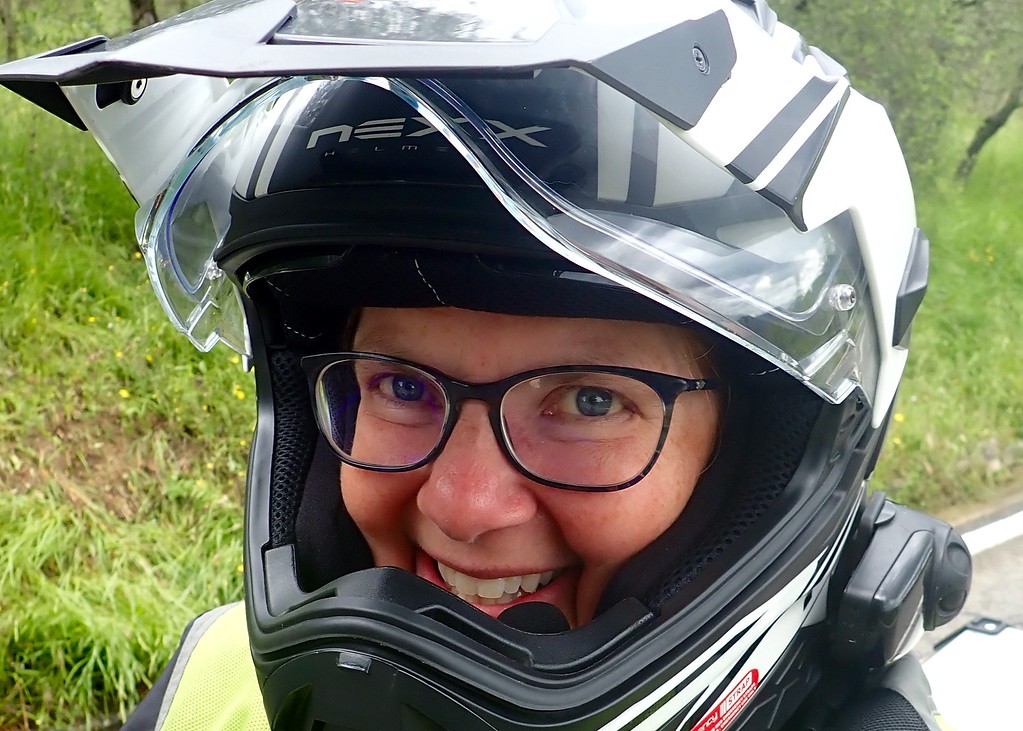 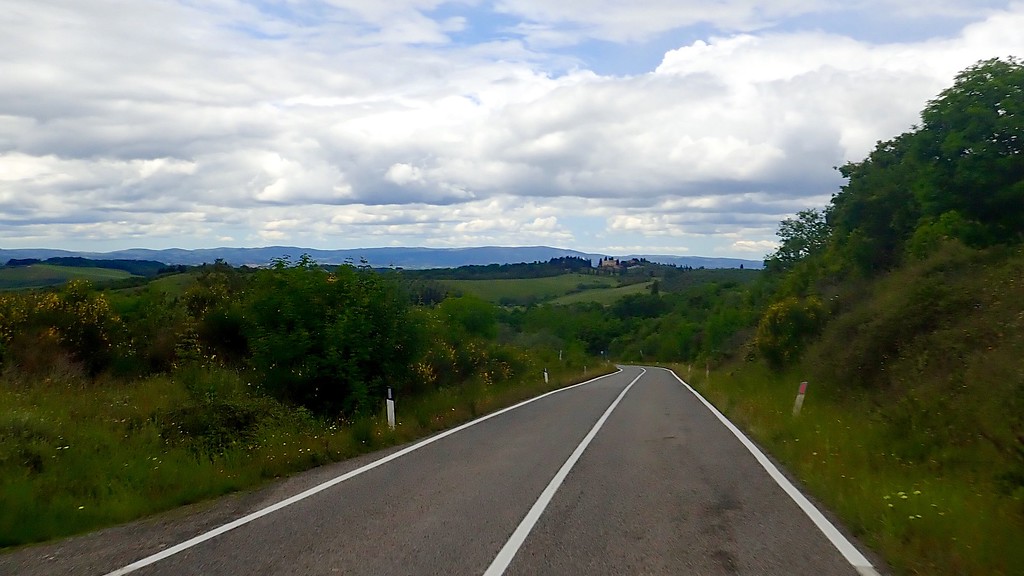 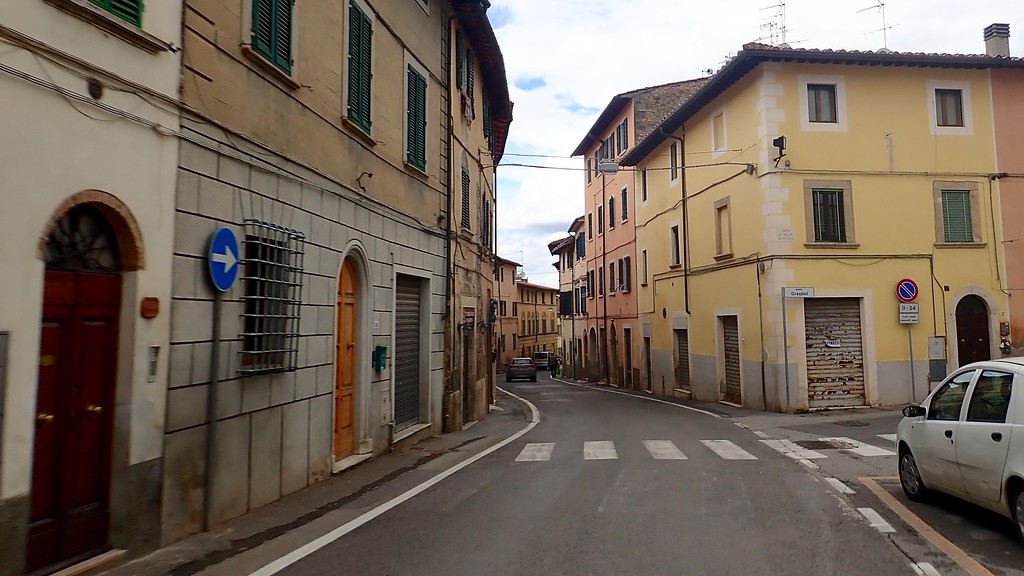 At San Gimignano, we found a place to park the bikes and headed into the ancient hilltop town to see what there was to see. It is known for its 13th century walls, and fourteen towers, and it was recommended by a friend that the best gelato was sold here, and we were ready to put this boast to the test.

Passing through one of the city’s gates

Standing in line for our gelato

Enjoying the tasty ice – and yes, it was good! 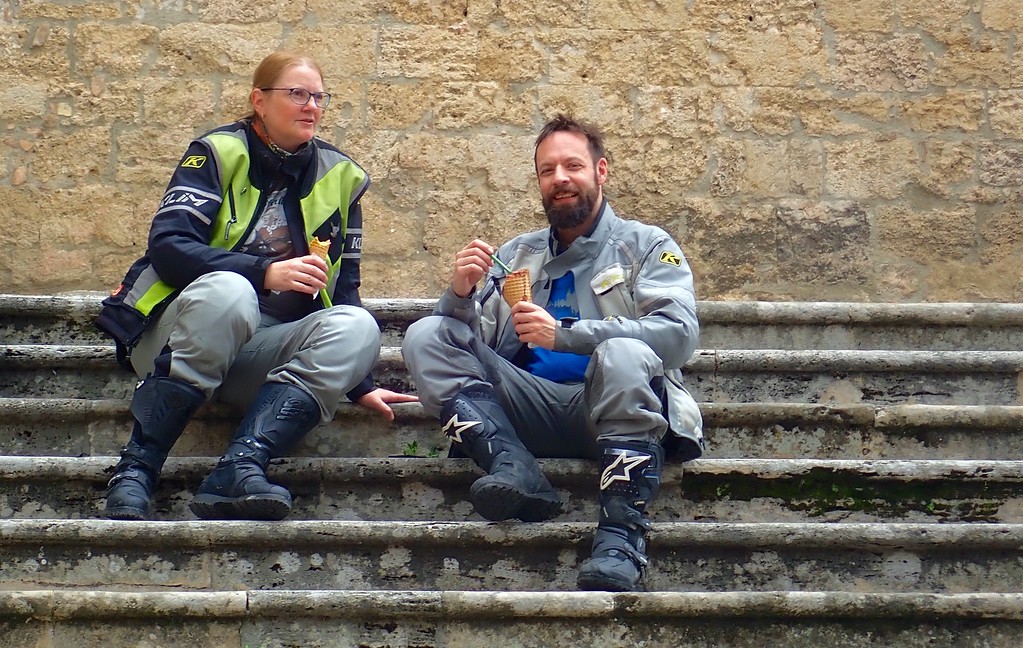 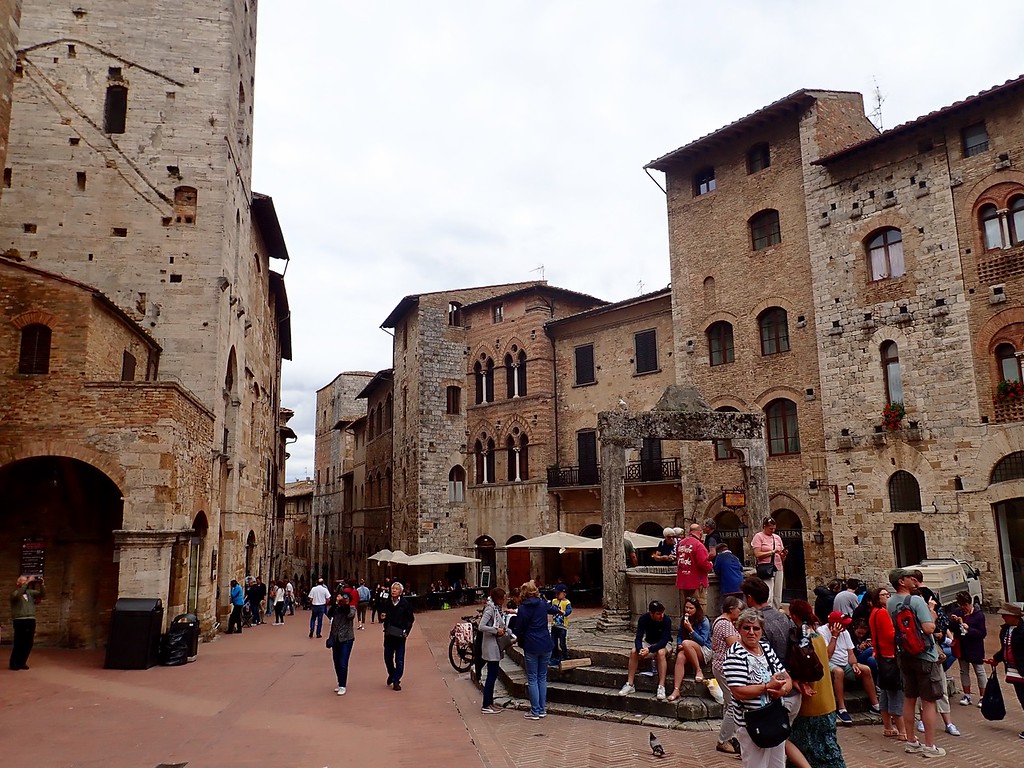 View from the city’s wall 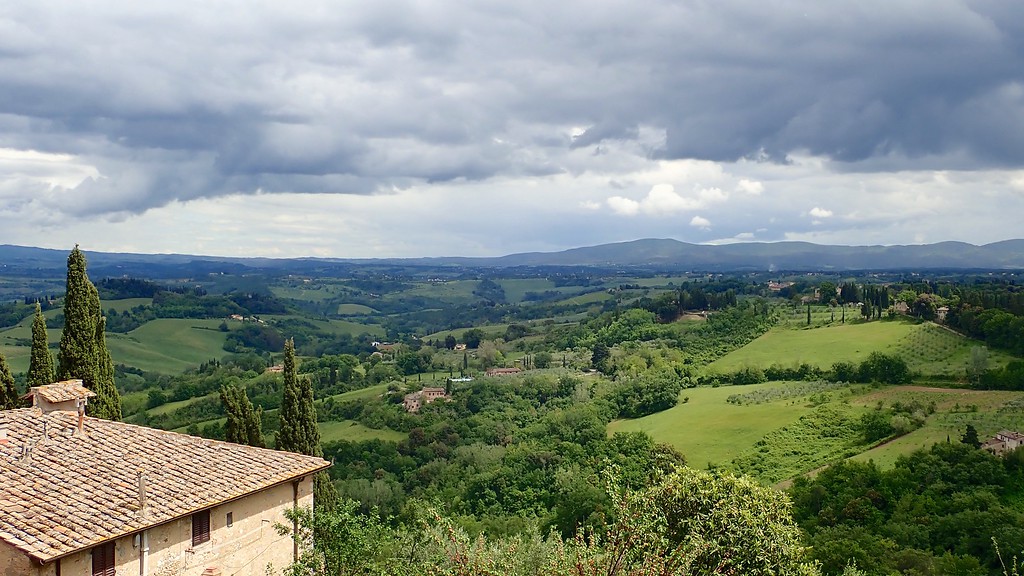 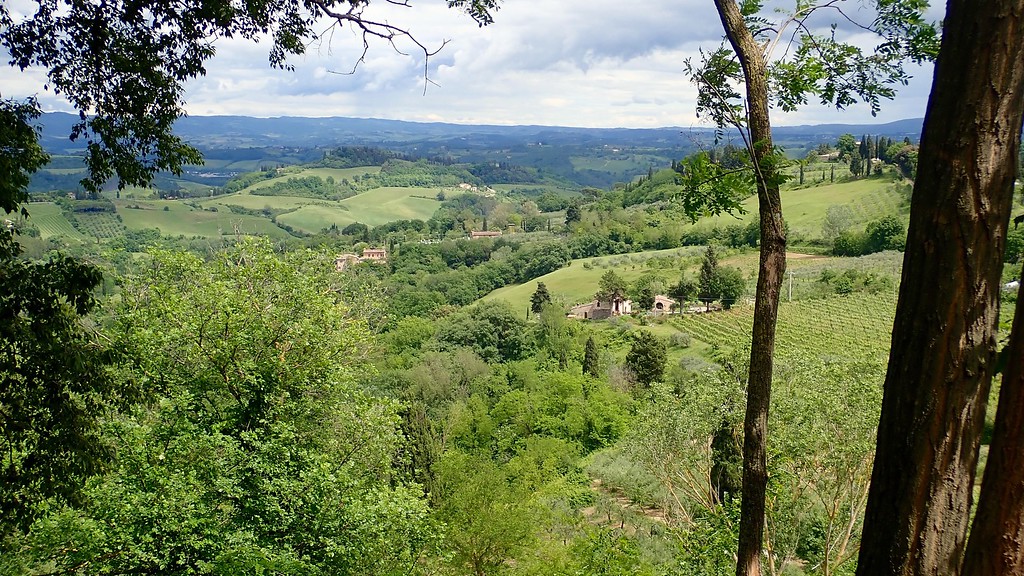 We had eaten our gelato, picked up some fresh products for tonight’s dinner extravaganza, and headed back to the bikes. It had been a relaxing day and now we were going to meander our way back to the apartment for our last night in Fiesole. 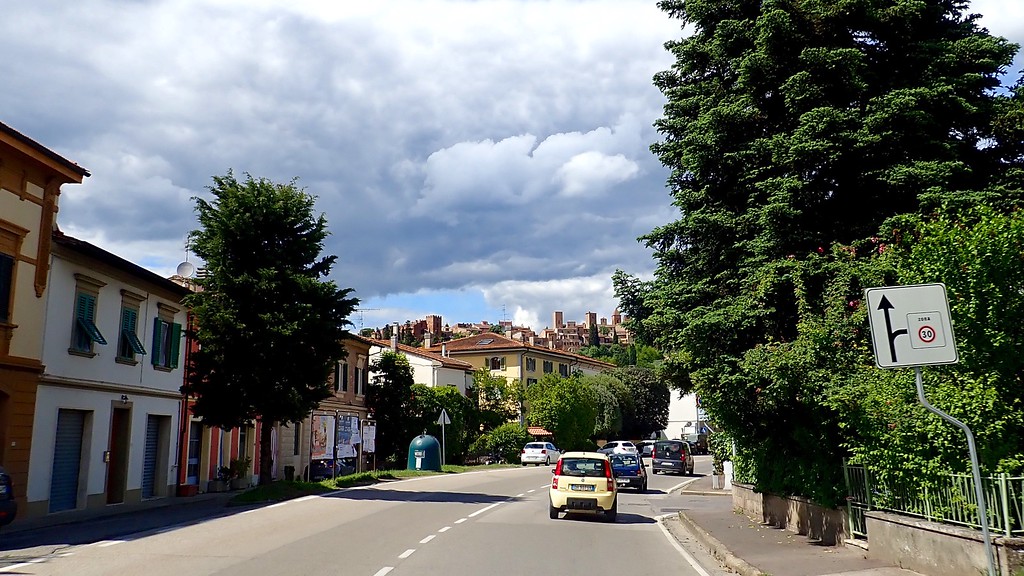 And the blue skies were appearing! 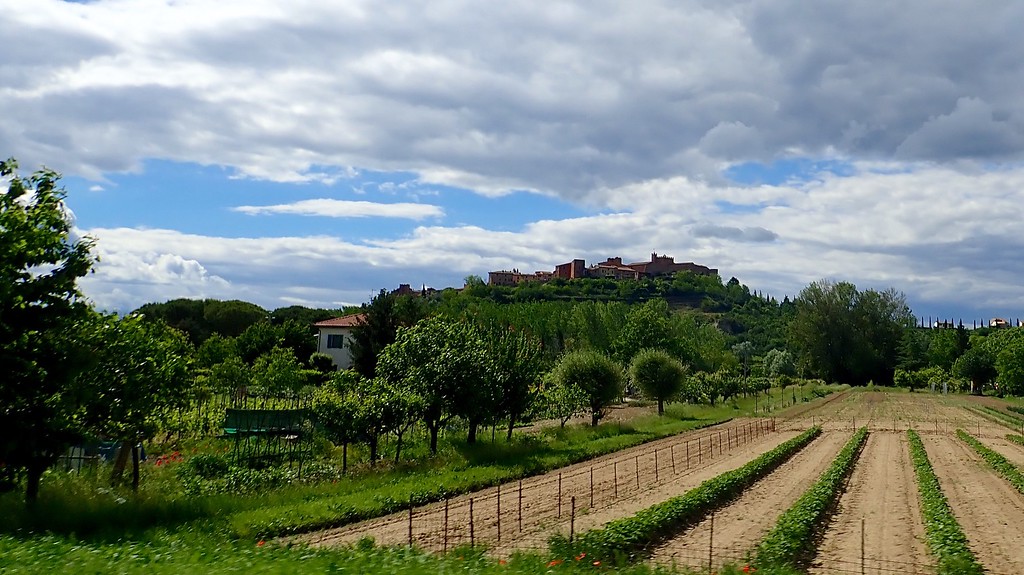 The roads back to Fiesole were nice, and by the time we reached our apartment it was fairly late in the day. It was nice to relax while Dan made another fine meal, and the sun lit up the remaining clouds. 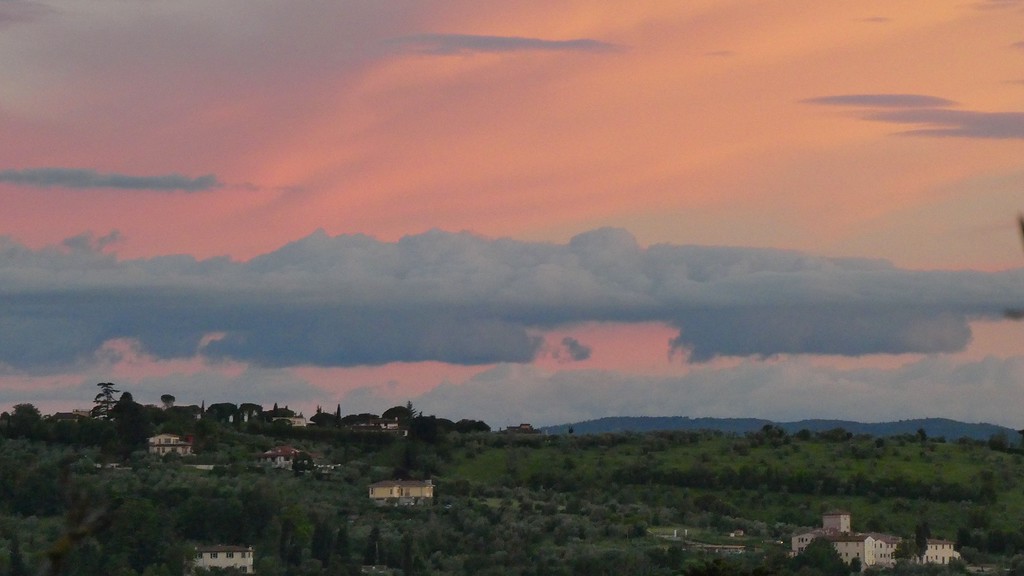 For as enjoyable as the hills of Tuscany were, they weren’t quite as I had imagined them. I can’t put my finger on what I thought I would see, but what I did see did not fit in with my preconceived ideas. Perhaps more rolling hills? More golden colors (autumn)? Clearly I’ll have to go back some day and try to figure this out!