We had seen a lot of Venice so far. Sure, there are always nooks and crannies that hadn’t been touched yet, but in looking at the Fish, there wasn’t much left to scale (hahah). It seemed like it was a good time to explore one of the “outer islands”. I think normally that people travel to Murano, famous for glass-blowing and lace-making. We had seen the crowds lined up for the boat for Murano the other day and I didn’t want any part of that. Instead we decided to visit one of the barrier islands, namely “Lido”.

Artwork near our hotel

Our water taxi was similar to all of the others we’d been on so far, although this one had more interior seating. We traveled up a canal that cut through the Fish’s head and then swung east to follow its back, all the way past the tail.

One thing that all water taxis had in common was the complete lack of finesse when it came to pulling up to a dock. Granted, I think that most of them tried to sidle up to the bumpers, but it was clear that “speed” took precedence over “accuracy”. There were many time when we hit pretty hard, and other times when the docking assistant had to act quick to get a secure rope around the cleats before the boat bounced too far. But never did we outright miss our dock, and never were the bumps enough to make me lose my footing.

Hospital and the ambulance shed 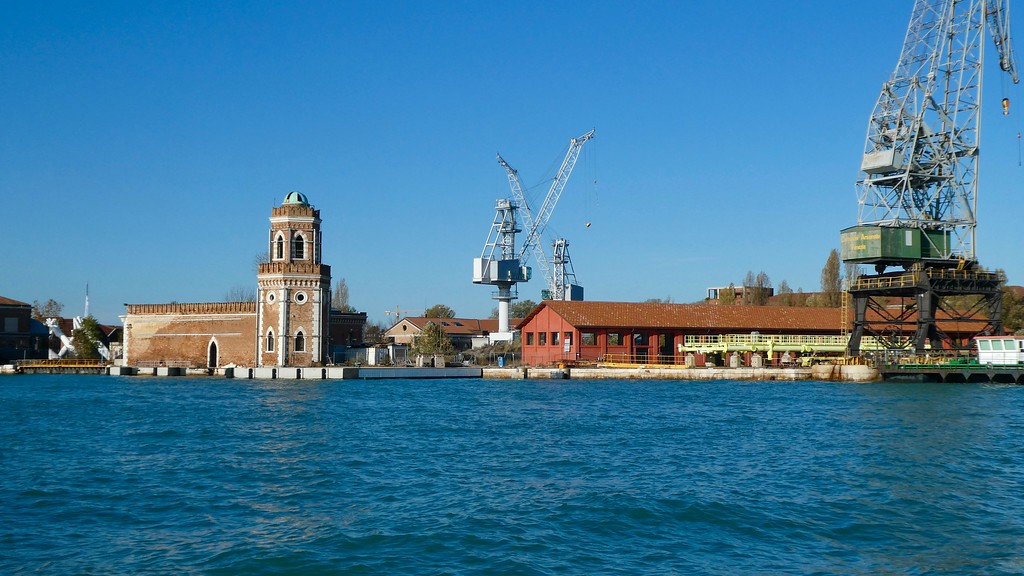 It was a smooth ride there with nothing remarkable to comment on. We docked at the main terminal at Lido and started walking. I had briefly scoped out the lay of the land and realized that if we started a clockwise route, it would show us a good cross section of the island. 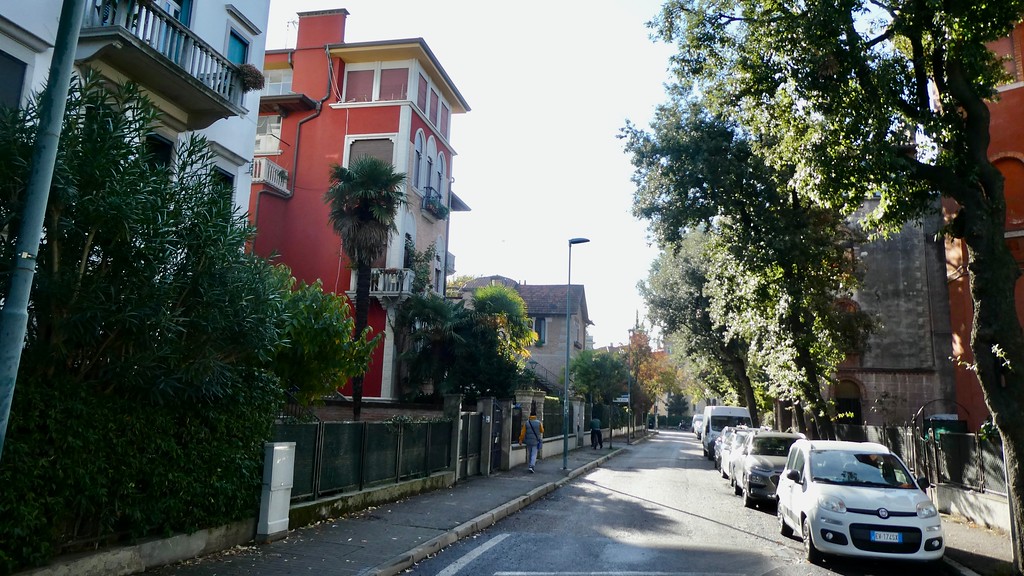 The island was long and narrow. We walked through the neighborhoods and came out on the other side, the side that faces the open water of the Mediterranean Sea. The quiet street that paralleled the waterfront was graced by tall pines and lower vegetation. It wasn’t “jungle lush”, but it was a welcome green compared to the austere nature (or “lack of nature”) in Venice.

Like many of the beaches I’ve seen on the Mediterranean, access to the sand was limited by numerous private reserves. Once you got past this block, there was full access to the water. But one had to get there first. No one was around on this lovely November day; this was obviously a summer playground. We found a narrow access path and made our way out to the sand.

Looking back at the Hotel des Bains (link in Italian) – not really abandoned, but close!

This hotel was massive – it was the first thing that caught our eye as we made our way along the beachfront. Most of the lower windows and doors were boarded up, but it didn’t look particularly abandoned. I could only find a wiki page in Italian, and this link, which has some photos and Very Small Text. One of the key bits in the wiki page that caught my eye was this:

“Right from the start, equipped with electric lighting, drinking water, iceboxes, telephones, lifts, private bathrooms and refrigerators, the complex was inaugurated with great pomp on July 5, 1900.”

All that in 1900! Talk about going First Class.

The beach was empty and wide. I believe that the tide was going out, and it left behind the debris that is unfortunately so common beaches around the world these days. 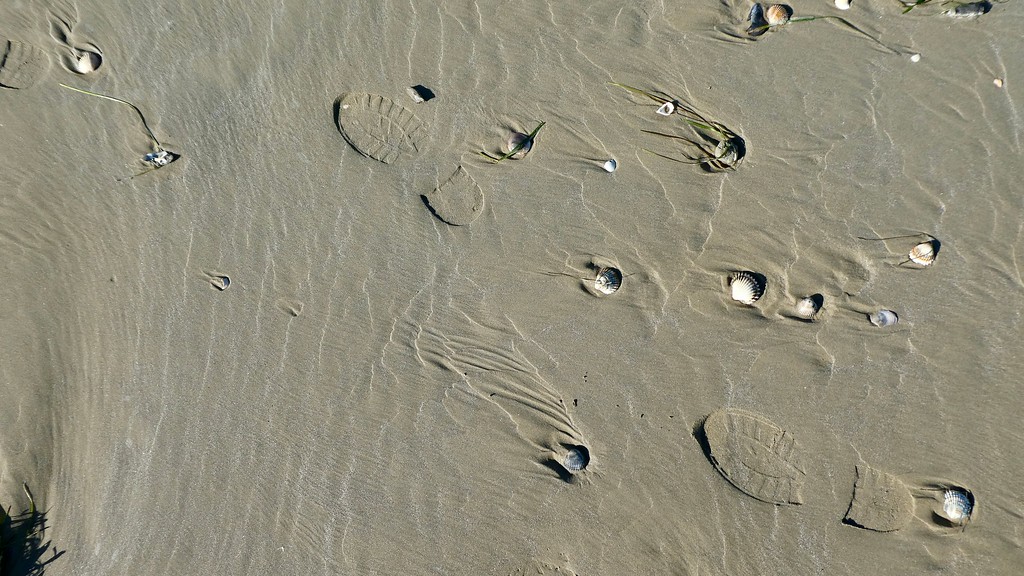 Don’t get caught here with the tide coming in!

Jetty with cargo ships on the horizon 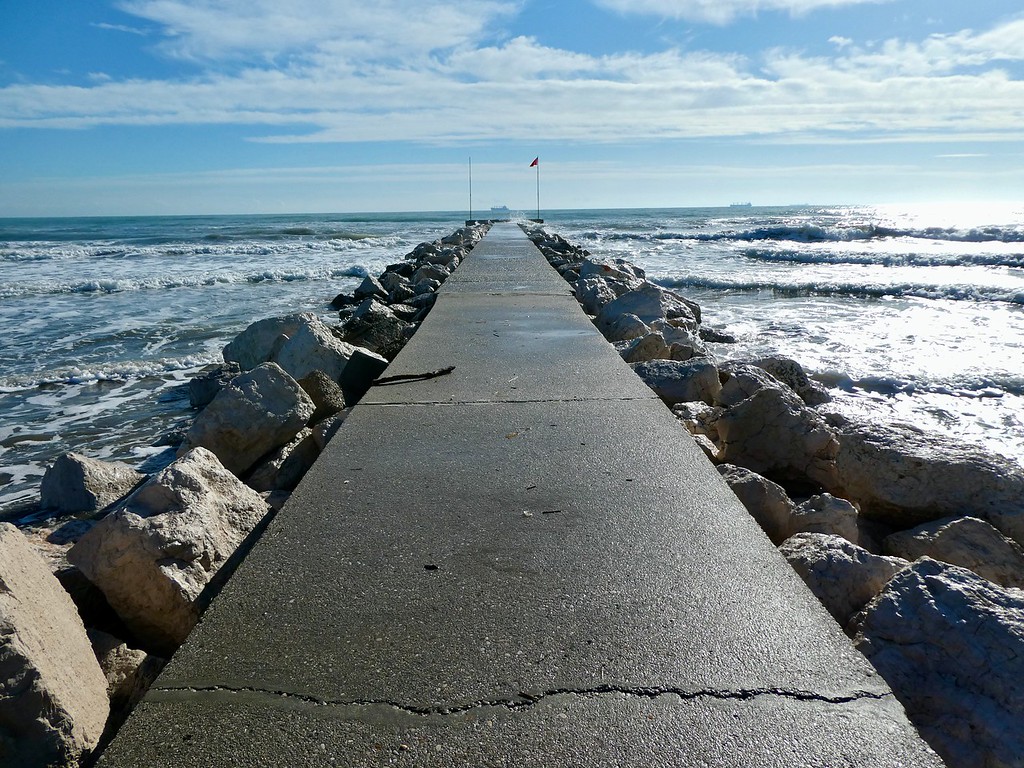 There were a few surf boarders bobbing on the incoming waves, but otherwise not much else was going on. It was pleasantly quiet and relaxing.

After a mile of walking along the beach it felt like it was far enough, considering that we still had to walk back to the dock to catch our boat back to Venice. We cut through the neighborhoods until we reached water again and then followed the path for our return.

The Venetian skyline – with great clouds!

The first fishermen I’d seen since our arrival 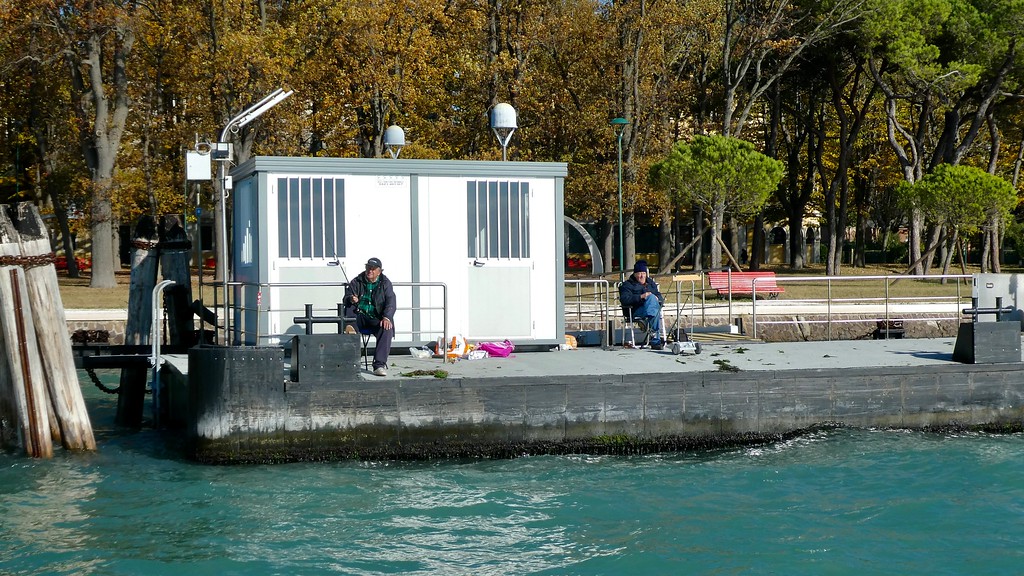 Our water taxi took us back and our next plan was to find lunch. But wait! What’s this? The park with the 3D printed bridge was open! We stopped by to have a closer look, now that we were allowed inside.

As we were leaving the park I saw a Dachshund. This wasn’t unusual. In fact, it was the opposite: we had noticed so many Dachshunds in Venice it almost seemed like it was the Official Dog Breed of the Venice. I joked that they were a useful breed because one could use them in front of the door to keep the tide waters out. Ha.

Another lovely day in Venice 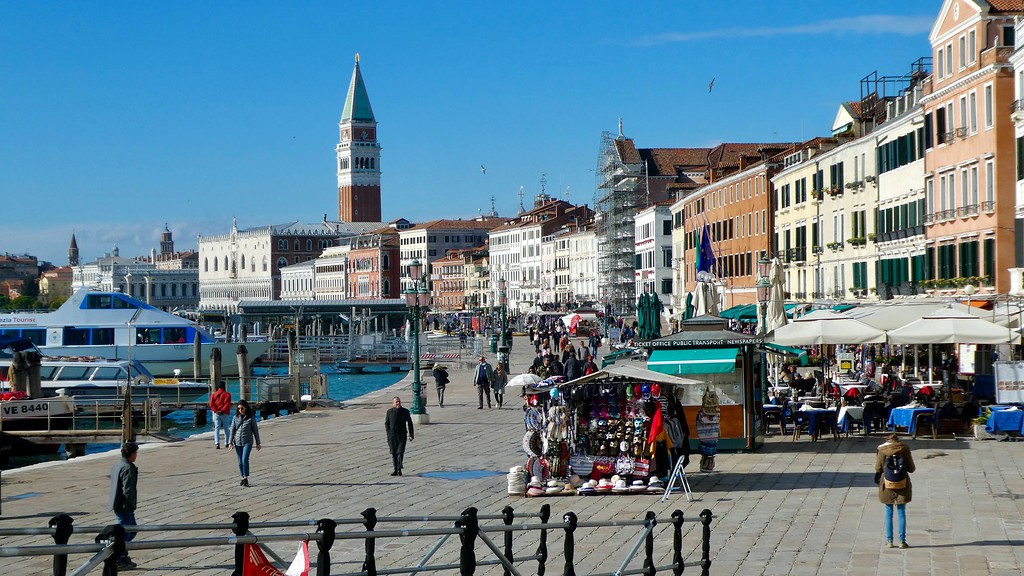 Ooooh! THAT looks nice! Maybe I should get one for home?

Pop quiz: what’s this for?

I need one of these on my front door

We were heading for a restaurant (Osteria Alle Testiere) that had been recommended by a friend. When we finally got there, we were informed that they had no seating available until 7 pm. We figured “What the heck!” and made dinner reservations. Meanwhile, we still needed to eat now and we had conveniently just passed a pizza shop that smelled amazing. We went back to it, popped into the tiny shop and ordered a couple squares of pizza. It tasted just as good as it smelled.

We did not eat here, but I love this kind of signage

Many people have asked me if the water in the canals was cleaner than usual. Since I have no reference of what the water used to look like, I can only say that it looked fine to me. I didn’t notice the bottom of any of the canals, but it also didn’t look sediment-laden or cloudy.

After I noticed the blown glass pendant light on the street, and saw a couple in restaurants, I was more and more curious about getting one. But where? I knew that I could probably get one from Murano, where they are made, but surely there are some available locally, and not some cheap reproduction. Then I saw this store:

And this was inside:

It was beautiful and I wanted it. But, being the practical person that I am (and Dan frowning at me from where he stood as I spoke to the owner), I realized that there would be a lot of complications if I bought this: I’d have to get it home (ok, that really wasn’t a problem), I’d have to arrange to get it wired up, as well as sort out how to best hang it from the ceiling. And most of all, I wasn’t 100% sure that it would “fit” in the space that I was considering hanging it. “When in doubt, don’t.” So I didn’t. But I have the shop’s information in case I ever change my mind!

This boat hadn’t had a haul out anytime recent!

We retreated to our hotel for another break and for a little catching up on the Internet. The day was chilly but bright and it was a good chance to check out our hotel’s roof top deck. The roof deck was an oddity here in Venice: so many buildings had what looked like a complete “after thought” deck tacked onto their roof. I suppose on a warm summer day they would be quite popular, but so far we hadn’t seen anyone on them.

View from our hotel, looking across at another roof deck

Funny story from our time on the roof: we brought up some snacks and drinks to enjoy while we were up there, but forgot a bottle opener. Dan thought he’d be clever and just leverage the cap off on the brick wall. Except that the brick kept crumbling! Yes, the bottle cap was stronger than the brick. No wonder the walls were disintegrating!

We looked at the Fish map again and scanned for regions that we hadn’t been to yet. The Fish’s jaw was unexplored territory – let’s go there! We tried to call the Osteria Alle Testiere to cancel our reservation, but no one answered – even after multiple tries. Dan found a vegan restaurant option and while neither of us are Vegan, it sounded like it would be a “light” option to our evening meal. It wasn’t quite sunset but it was getting late. We once again set our “meander this way” point and went off in search of something new. 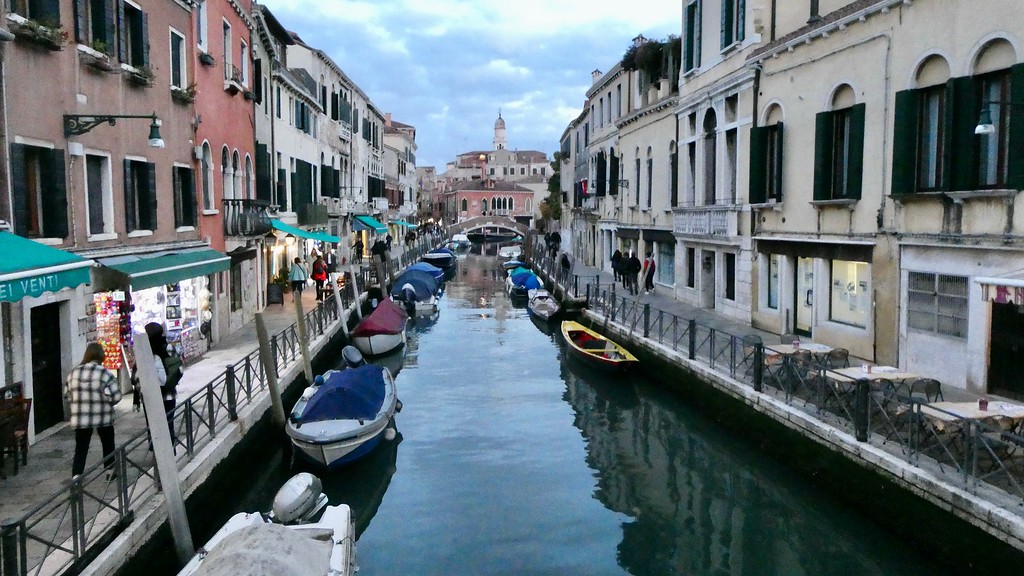 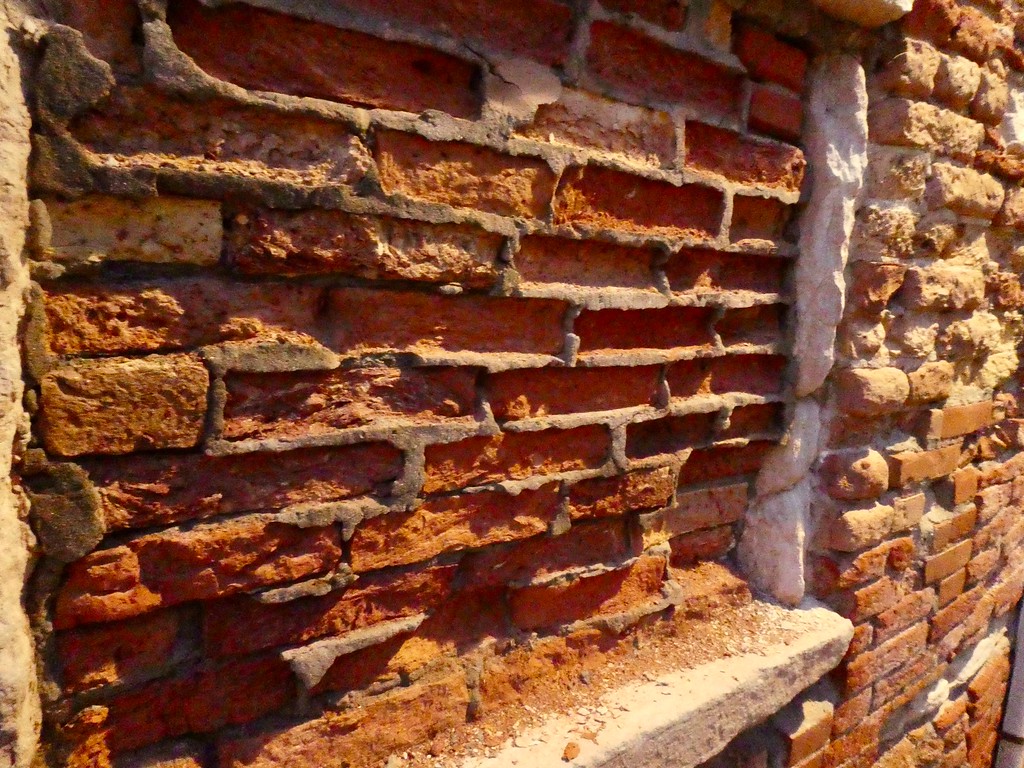 We had entered an area with a high density of universities and it was reflected in the number of student-aged people we saw on the streets, the boisterous groups of students hanging out at canal-side bars and the modern and slightly austere buildings.

We found the vegan restaurant, La Tecia Vegana, but it was closed. It was currently 5:30 pm and it didn’t open until 7:00 pm. What would we do for an hour and a half? Walk around, I guess.

We reached the industrial area of the Fish’s jaw and decided to retreat back towards the city center. Surprisingly we found the prison – “Casa Circondariale Santa Maria Maggiore Venezia“! I liked the design on the official vehicles.

Ready to nab any miscreants 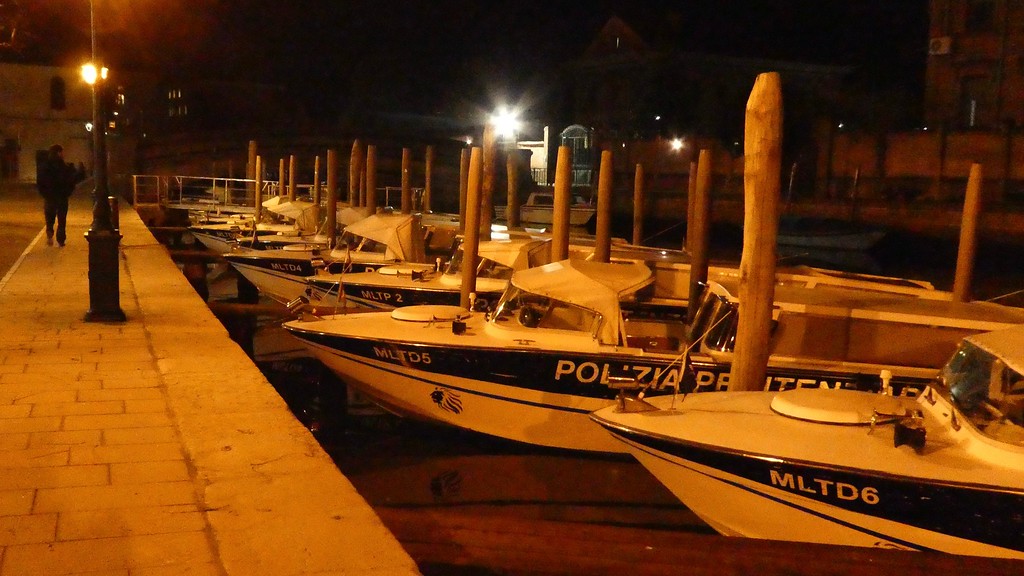 At this point we had given up on dinner. Dan wasn’t very hungry and neither was I, so we settled on a type of calzone from a street side vendor. It was ok – not nearly as cheesy as I was hoping, but it did the trick. From here we took a more-or-less direct path back to our hotel, detouring slightly when we ran across an LGBT protest surging through the narrow streets. 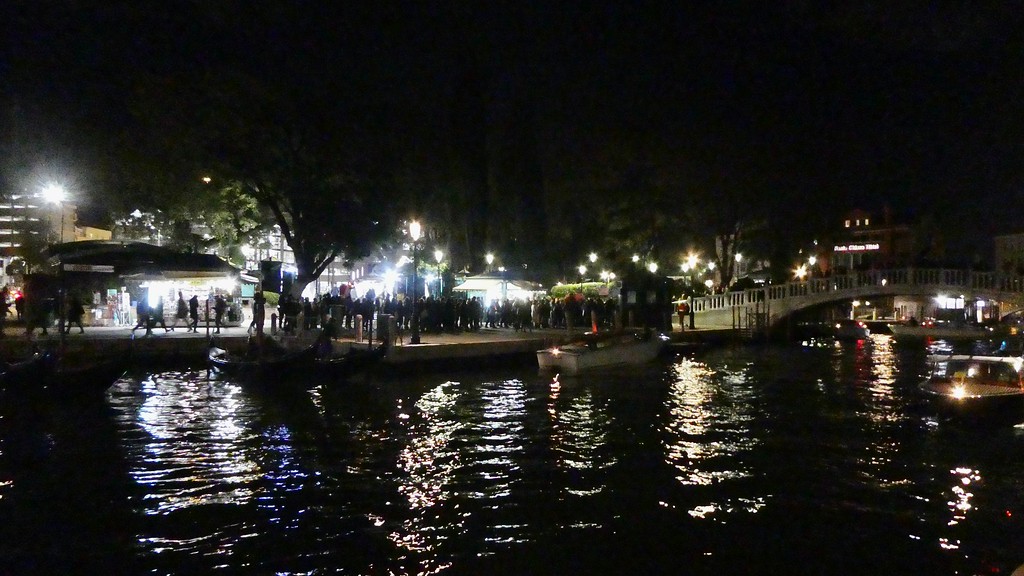 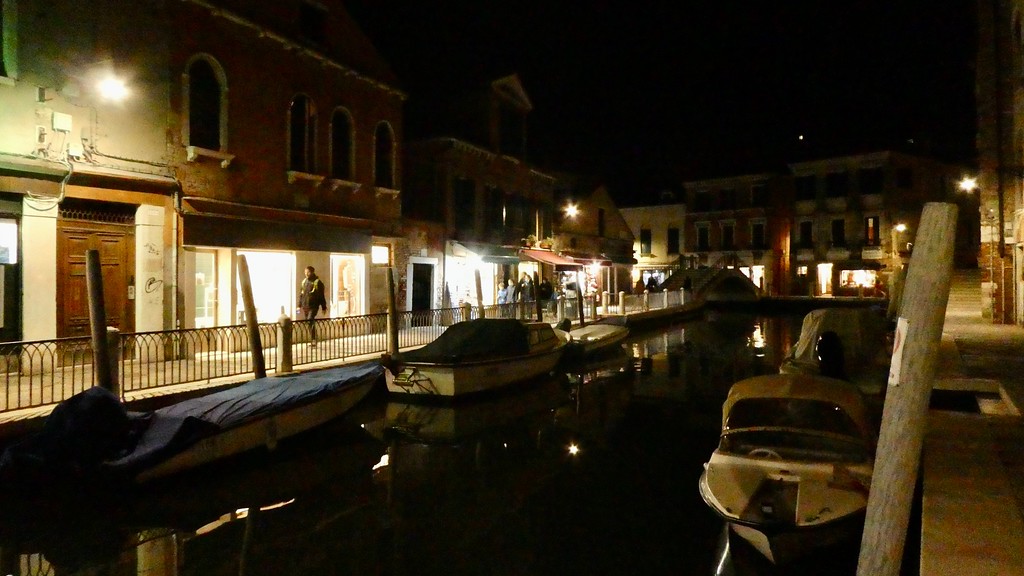