Our next stop was for lunch, which wasn’t so much “our” idea, as it was the planned tour’s idea. The Isole Pescatori was known for its plethora of shops and restaurants, and we had arrived at the perfect time.

Most of the boats used the same “dock”, so getting off and on had to be quick

Isole Pescatori used to be a small fishing village and, to some extent, it still was. But now it was predominantly overrun by tourists, and only about twenty five people now live there year around.

Looking back to Isola Madre

We had found lunch at Chez Marvel, which was surprisingly difficult. Neither of us really knew what we wanted to eat, and so many of the restaurants had people standing outside to entice us in (which usually puts us off), that we just kept walking around and around, until we finally gave up and just took a table. Despite the sign at the door, there was no view from our seats, and the food was “ok”. But at least the service was nice.

We decided to hurry up and catch the next boat instead of waiting an hour. We had seen pretty much all that we had wanted to see here, and I knew that we’d just get bored if we had to wait unnecessarily.

The main draw to the Borromean Islands (as these three islands are referred to) is Isola Bella. Here, the star of the show was the Palazzo, an immense Baroque structure, and its impressive Italiante gardens. Of course, I only knew that “one island was full of restaurants, and the other has nice formal gardens”. Let’s see just how much more there was to see!

As soon as we got off the ferry we headed for the Palazzo. We were excited to see the pinnacle attraction of this region!

Because we bought the fully comprehensive ticket, everything was included, meaning all the ferry boats and the entrance fees to the various establishments. This made things very relaxing, as we never had to consider if it was “worth it” when it came to entrance fees. It was also nice to just waltz right through the front door and enjoy the wonders on the other side.

So many paintings! In such big frames!

Detail along the top of the portraiture room

The rooms in the palace were scrumptious. Each one was lavishly decorated, with rich materials, colors and textures.

I would love to have more details about what I was looking at and what it all “meant”, but the little informational plaques were only on the walls, and not something I could take with me to reference later. So instead, I will “borrow” some information from the wiki page:

“The palace was built in the 13th century for the House of Borromeo. At the time, the Borromeo (originally from Florence) were quickly consolidating their influence in Milan and Northern Italy. The palace eventually became the centre of a sort of “Borromeo citadel” within the city proper. The Borromeo used the area for celebrations and events such as chivalrous tournaments. The palace was also renowned for housing a prestigious art collection.

The palace has a late Gothic architecture, which has nevertheless undergone several major modifications through the centuries (and most notably after being damaged by bombings in World War II).

The main feature of the facade is the large doorway, decorated with white and red marble. The inner courtyard is the part of the palace that is best preserved; some of the original frescoes are still visible, some representing the tourneys held by the Borromeo are found in one of the rooms of the palace, known as the “architecture study”; they are credited to painter Michelino da Besozzo. The palace is still the property of the Borromeo family.”

Hmmm. That was a lot of words, but not a lot of information. Let’s look at more pictures! 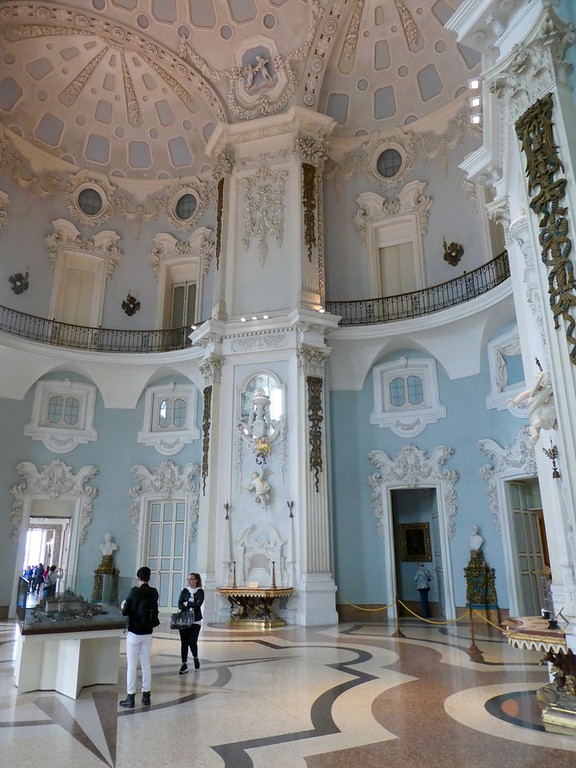 Looking north, back towards Isolo Pesactori

Detail of Trompe-l’œil on the ceiling

A number of the lower rooms were dedicated “grottos”. I couldn’t imagine what one would do with all of these rooms but hey! Those people partied in a whole different way hundreds of years ago!

So many little stones! 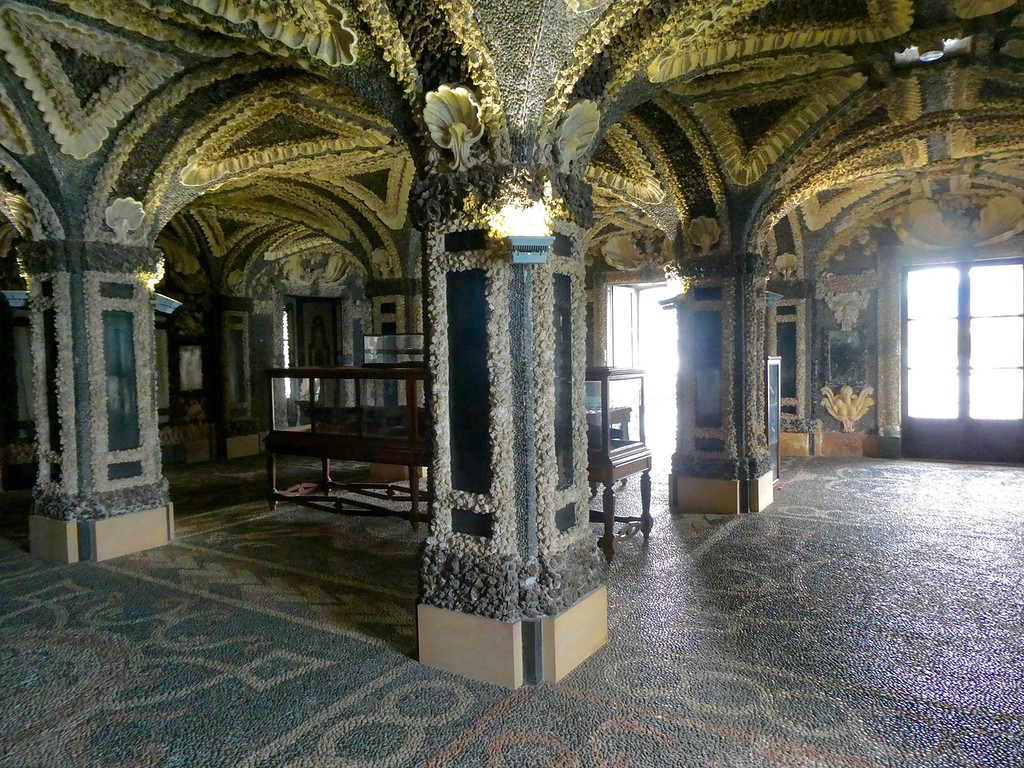 Carriage horse trappings perfectly preserved in one of the grottos

Awesome stair construction (we weren’t allowed up them)

We eventually resurfaced from the grottos and returned to the opulent ground floor rooms – namely, the Tapestry Hall.

We were suddenly outside. We had reached the famous gardens that the island was really known for. By now, the sun had started to shine and the day was looking bright.

The first thing we saw when we came outside

And this is what was behind it

It was grand! The scale of it was beyond anything I had expected. We scrambled up and around the pathways, taking in the views from various angles. It had turned into a glorious day for sightseeing.

The Palazzo is behind those trees

It had been a day well-spent. We had toured the palace and the grounds, and made a quick tour of the rest of the island while we waited for the next ferry to come and whisk us back to Stresa. 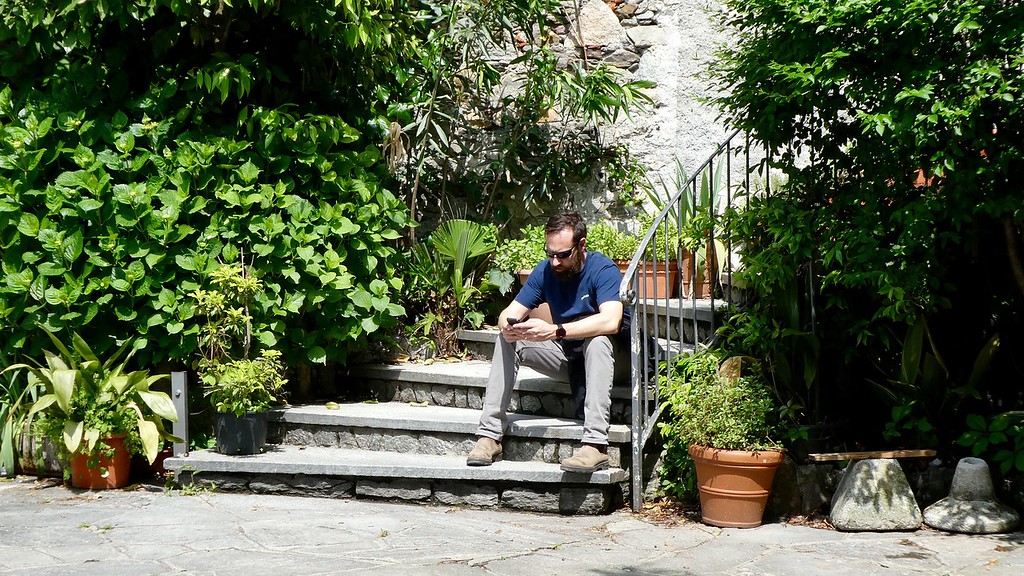 It was fairly late in the day, but not late enough to just pop out to dinner and finish off the evening. We still had some energy so decided to do some more local exploration.

People on their bikes, enjoying the day on two wheels instead of two feet 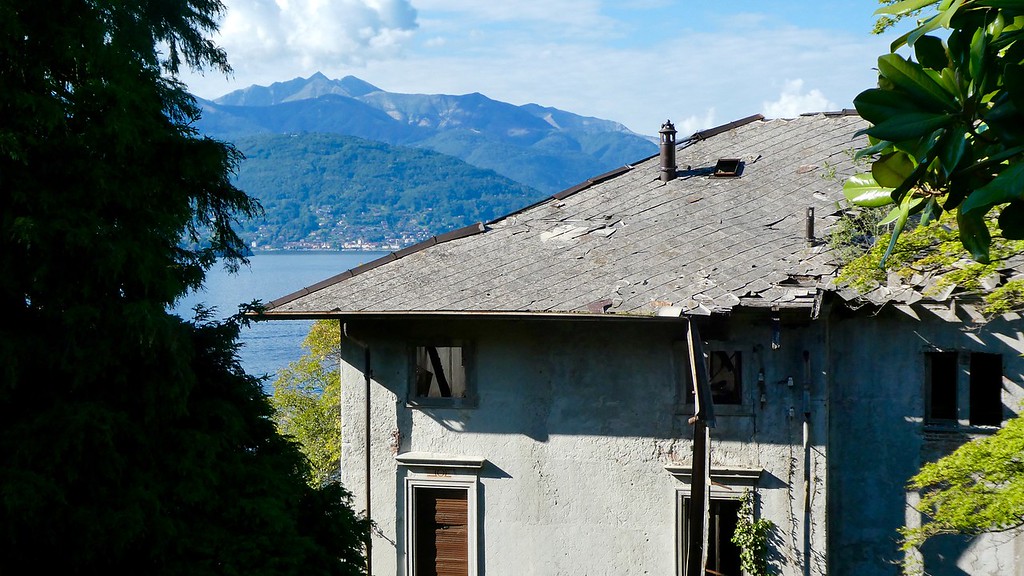 The road that we followed up the hill from town

Coming back down the hill through a nice neighborhood 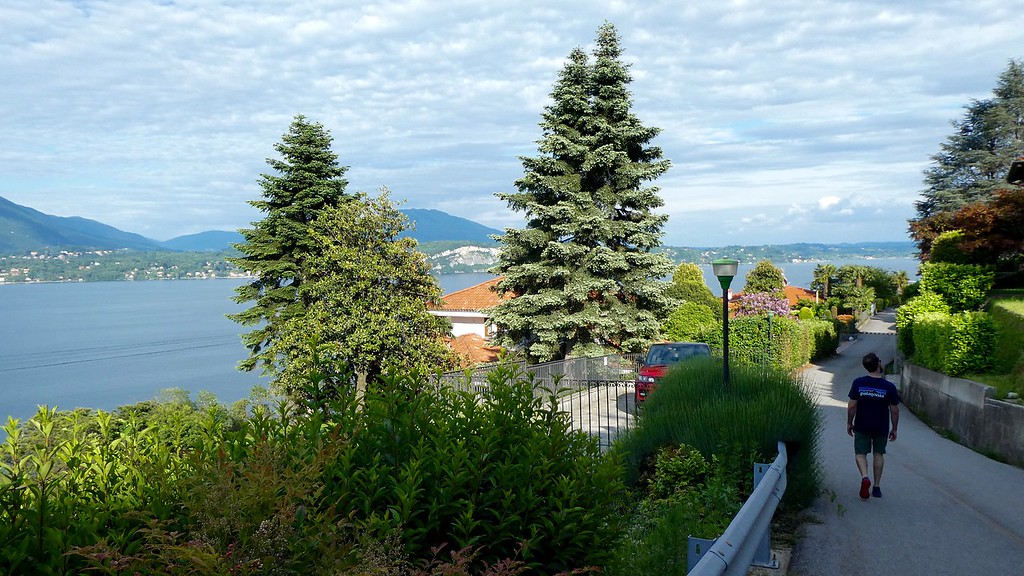 We came out to the main road along the lake, almost two kilometers south of town. The lakeside road was not set up for pedestrians, so we carefully made our way back, keeping back as buses and cars whizzed by.

Tomorrow’s photo, showing the stretch of road that we had walked up

We had a nice meal at Ristorante Trattoria “Stornello” (good food!) before returning to our room to pack in preparation for tomorrow’s departure. We still have a ways to go to reach Tuscany!