I had volunteered to drive, since I enjoy driving and Ron enjoyed the chance to look around. After a quick stop for coffee and breakfast pastries we picked up the car and headed out of town. It was another clear and beautiful day, albeit still chilly at this early hour of 8 am. Our goal was the town of Bubion, on the southern border of the Sierra Nevada Park, a huge mass of green on the map. It would be great to actually see this park up close, after having viewed the white peaks from Granada.

The wind industry is huge in Spain – and so is this turbine blade! 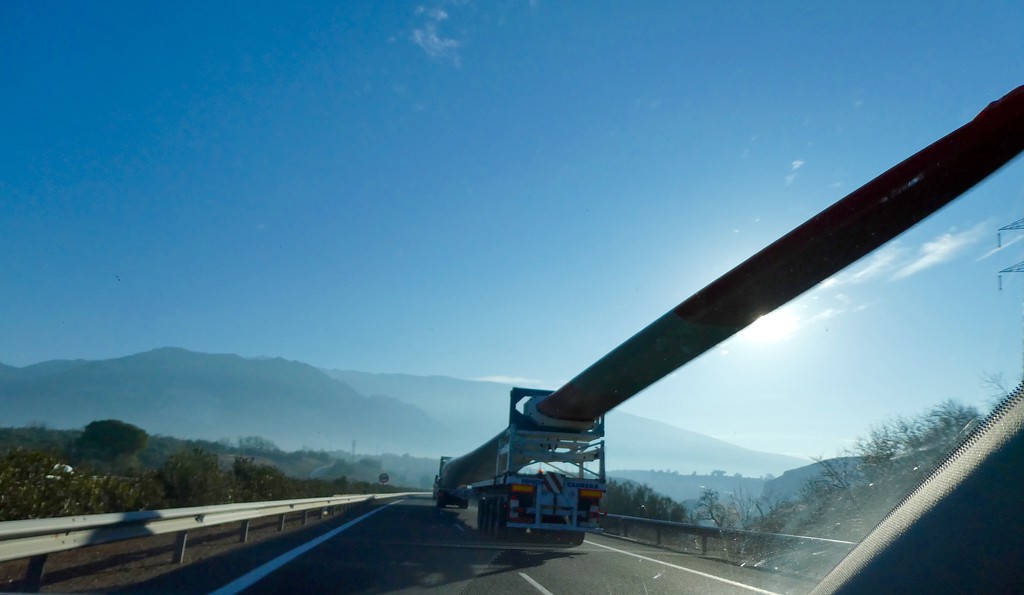 Stopping at a random cave on the way to Bubion 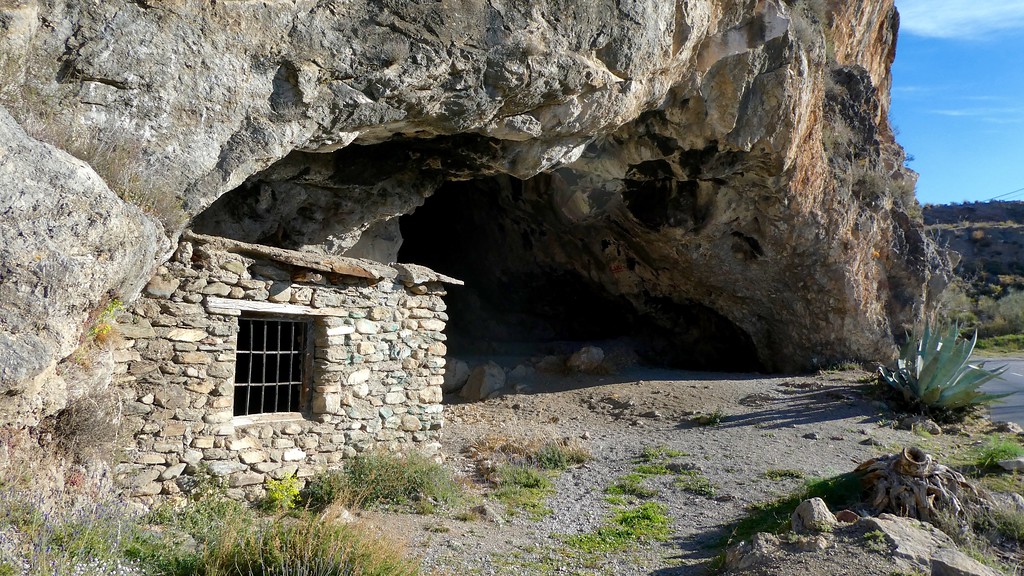 Once again I was disappointed to be in a car and not on the motorcycle. So many times I’d round a corner and wish that I had my little Canon handy to take a photo. Instead, I had to rely on Dan or just pull over. I pulled over at the cave, since it seemed like an interesting place to stop anyway.

The road we came up

The hills around the Sierra Nevada mountains are known for their “Pueblos Blancos”, or white villages. These little villages sit high up on the mountainsides, a dense grouping of stark white buildings contrasting to the green (or, in this case, winter brown) hillsides.

Bubion, from within the village streets 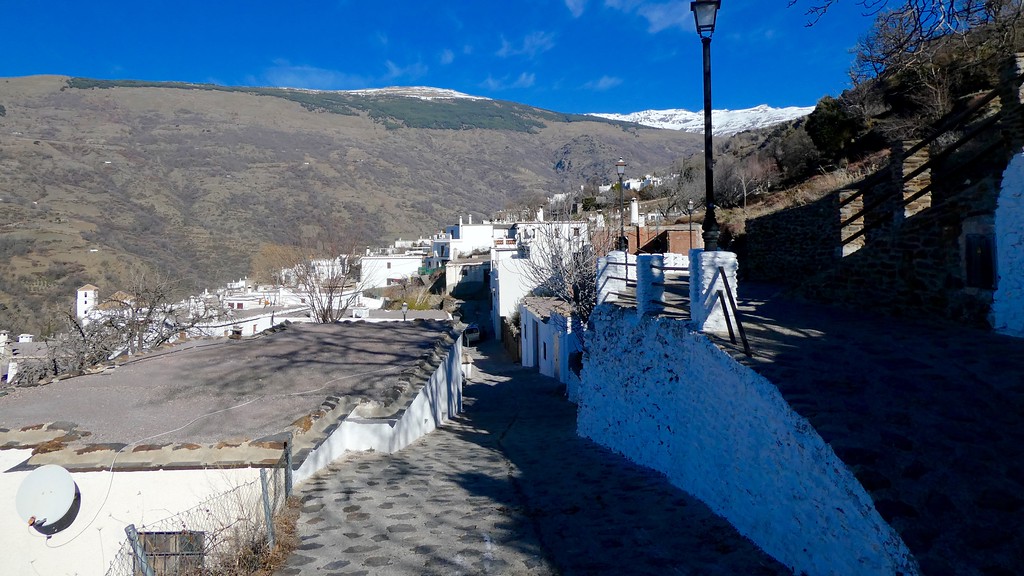 Horse Treks, the place where we were to embark on our adventure, was a little tricky to get to. The driveway was physically impossible to drive up due to a stone wall on one side and a drop off on the other. I parked the car further down the hill and we walked back up to the paddock area, which was bustling with activity.

We met with Rafael and his son Pablo, who would accompany us on today’s trek. A couple of other guys were working on preparing the horses, including lunging one in the paddock in quick, tight, circles. Rafael was a gregarious fellow and very easy going. He was pleased to talk about his company and his history, as well as checking with us regarding our expectations for the day.

A little time was spent on the horses in the paddock, getting to know our mounts and reassuring the mind of Rafael that we weren’t complete fools on horseback! There were just the three of us, with Rafael and Pablo taking the lead, as we left behind the gated enclosure and headed off into the mountains of the Sierra Nevadas!

The trail was technical – a lot more technical than I expected. I guess I anticipated some dirt trails that worked their way gently along the mountain sides. Instead, we were almost immediately trodding on a rock-strewn path that went up at a very steep rate. I hadn’t seen anything with hooves climb like this since our pack animals in Bhutan! But this time I was actually on the back and not just being urged along from behind.

We had stopped at a plateau for a quick break and re-grouping, as the next section was going to be “steep” – uh oh! Dan and I were hanging out near the back while the other three prepared to start the ascent. There was a burst of commotion as Ron’s horse suddenly kicked its hind legs back and raised up its head. Ron was taken completely by surprise by this manoeuvre and while he did his best, he soon found himself on the ground next to the horse. I wasn’t sure what I should do, if anything. Ron took a little longer than I was comfortable with before he stood up, and Pablo and Rafael made their way to him as quick as they could.

The scene of the crime

Ron’s injuries topped out at a cut lip which, while causing a disturbing amount of blood, was overall not terribly serious. He was game to get back on the horse and continue the ride, much to everyone else’s relief. We made it to another plateau and took another break, where I could finally pull out my camera comfortably and get some photos. Unfortunately for me, my horse did not like the sound of me opening the pouch where I was keeping the camera, so it did not come out as often as I would have liked. 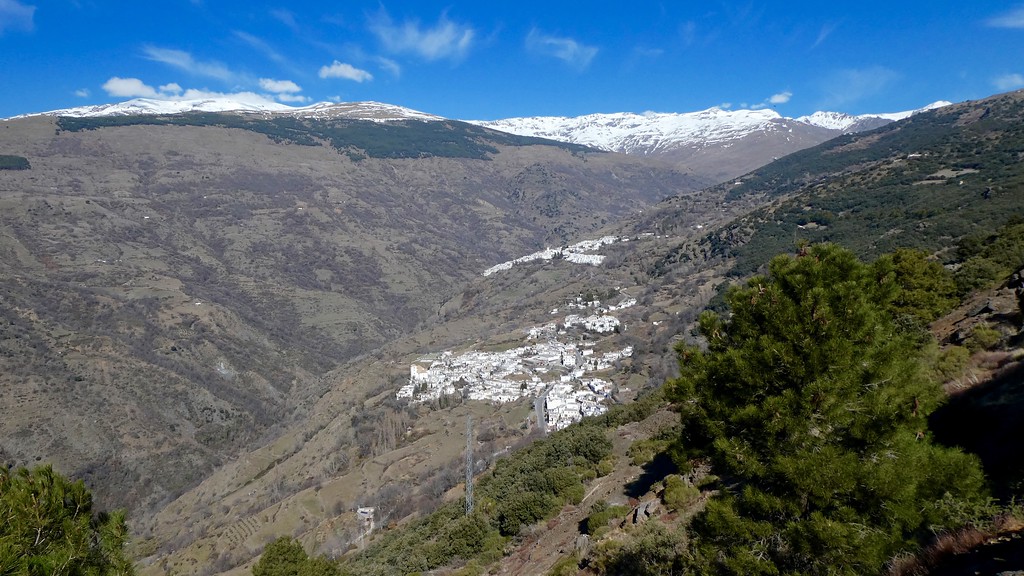 Dan is riding a headless horse

With Ron still mopping at his lip, the trail became much easier. Perhaps this was a coincidence or perhaps Rafael altered the route based on the morning’s excitement. Our route was an easy dirt road that followed a ridge, giving us great views no matter which way we looked. I had regained my comfort from so many years ago and was itching a bit for a trot, but knew that it probably wouldn’t be appreciated by everyone else.

The road turned and took us through a cool pine forest, the straight lines of trunks a sure indication of a plantation. The company’s dog also bounded along with us, startling the horses once in a while as it came crashing out of the underbrush and back onto the trail. Rafael, Pablo, and Ron were deep in conversation at the head of the line while Dan and I trailed behind. Dan’s horse was a bit lazier than mine, so I took up the rear just to encourage that things keep moving. 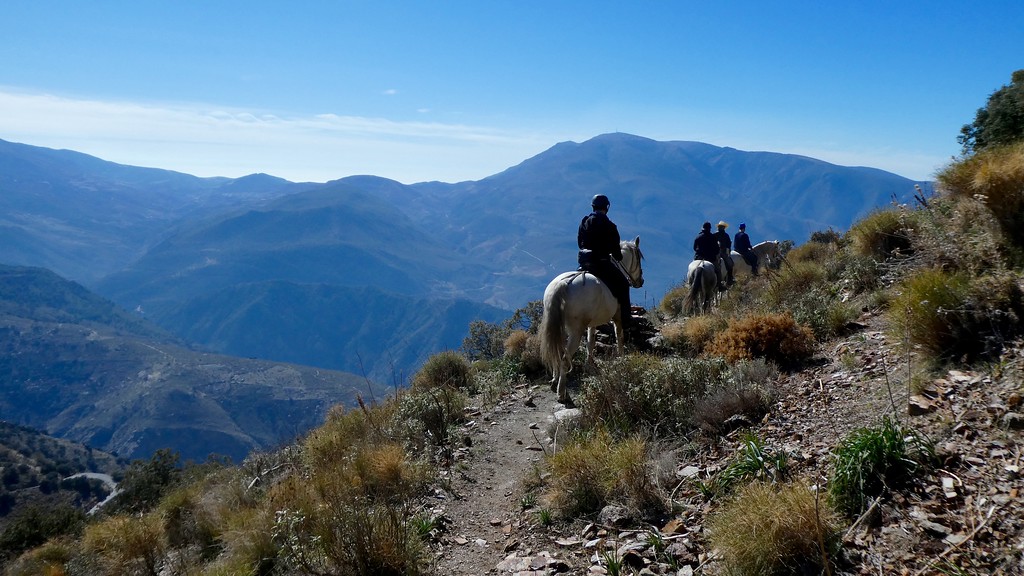 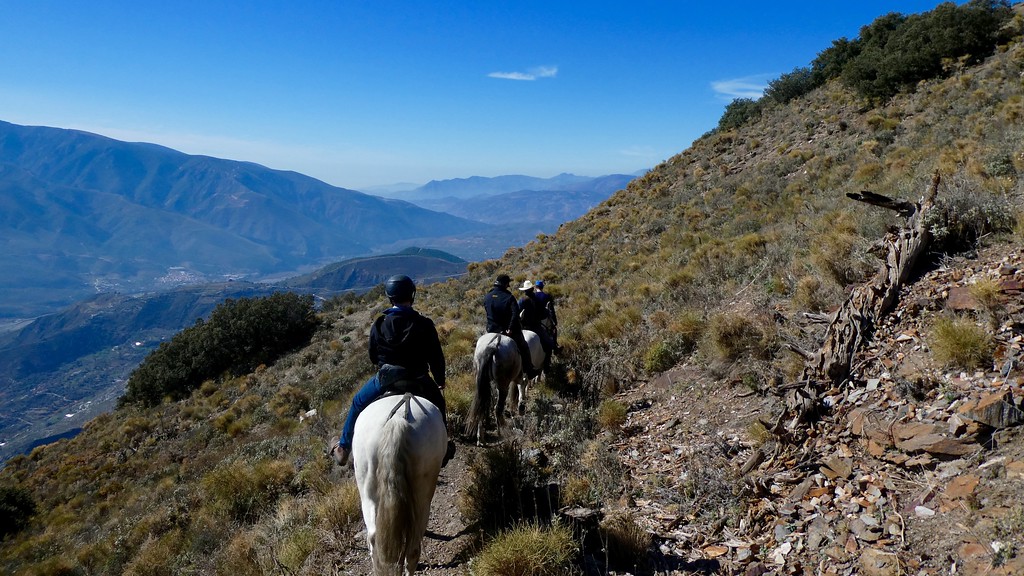 Our destination is just around the next corner!

We had been out for only an hour and a half, but for me it had been a good outing. The weather had been perfect for us and our hosts were more than accommodating. We spent quite a bit of time post-ride in discussing our riding histories, future plans and where we should go for lunch. 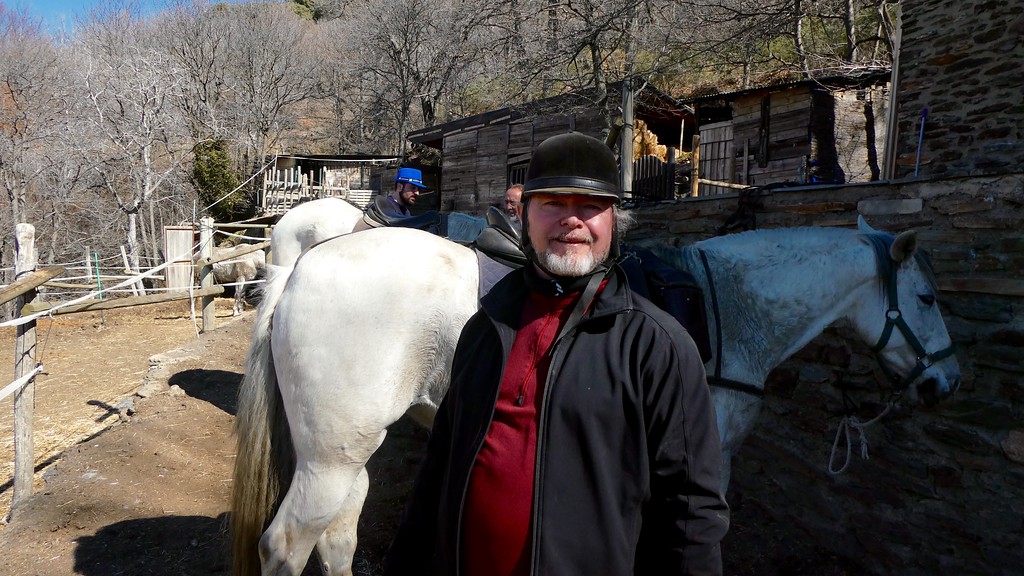 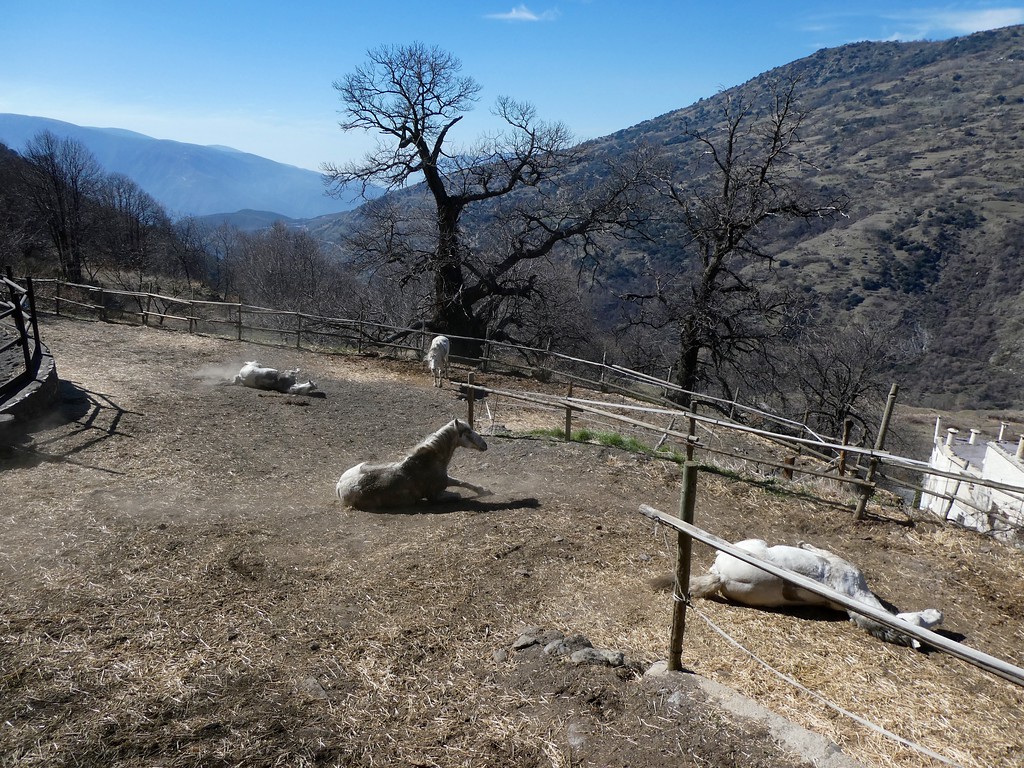 There wasn’t much to see or do in Bubion, but we were told that the next town, Pampaneira, would be a good place to stop. Based on the size of the parking lot (and additional “bus parking” lot), this was not a quiet village to visit during the high season. Thank goodness we had come when we did! 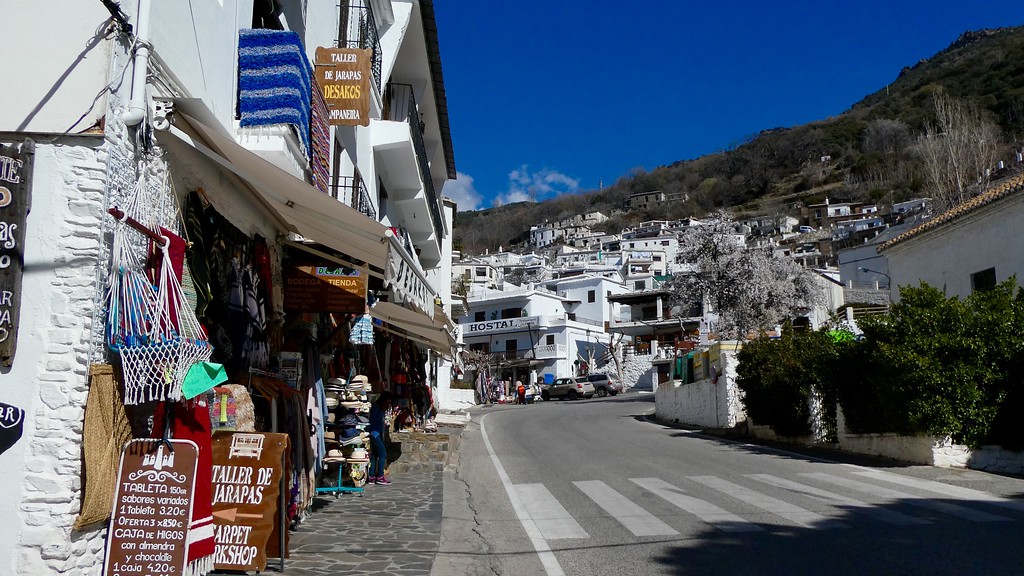 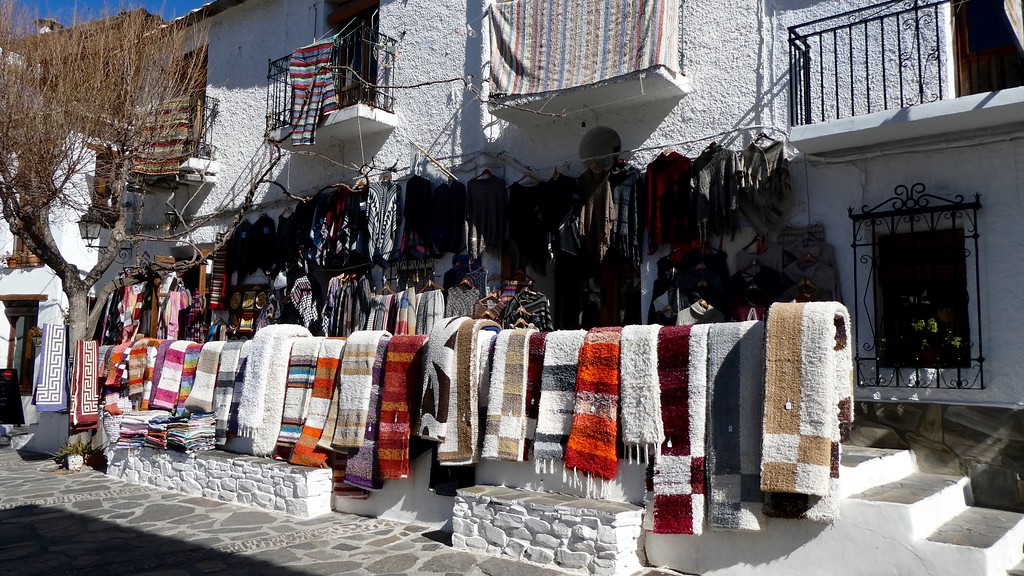 We sat outside in the sunshine for lunch, but none of us were very hungry. It was decided to order a sample platter that included a lot of local specialties. Split among the three of us, it turned out to be the perfect amount of food. It was relaxing to sit in the small plaza and watch the tourists and school kids walk by. 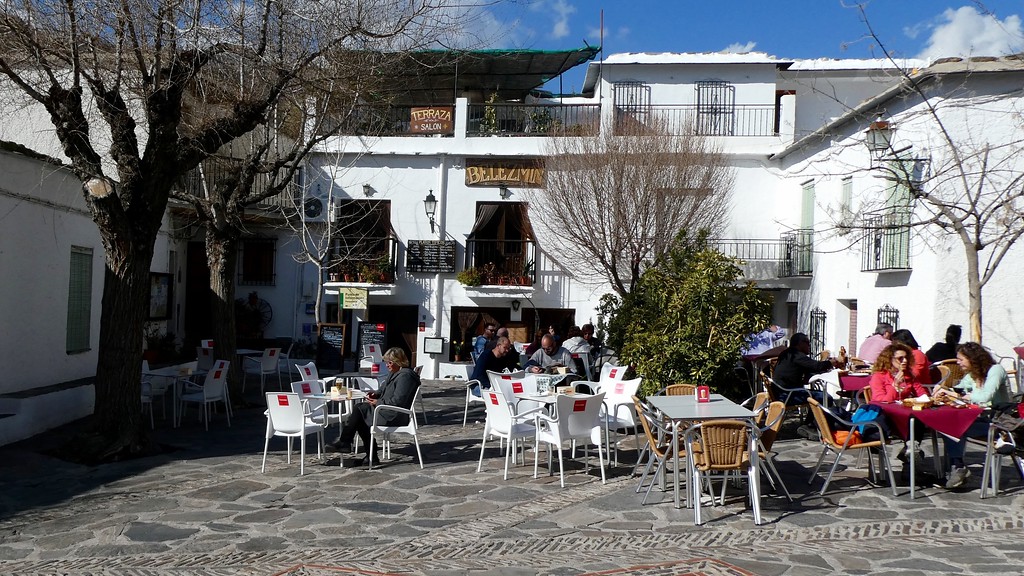 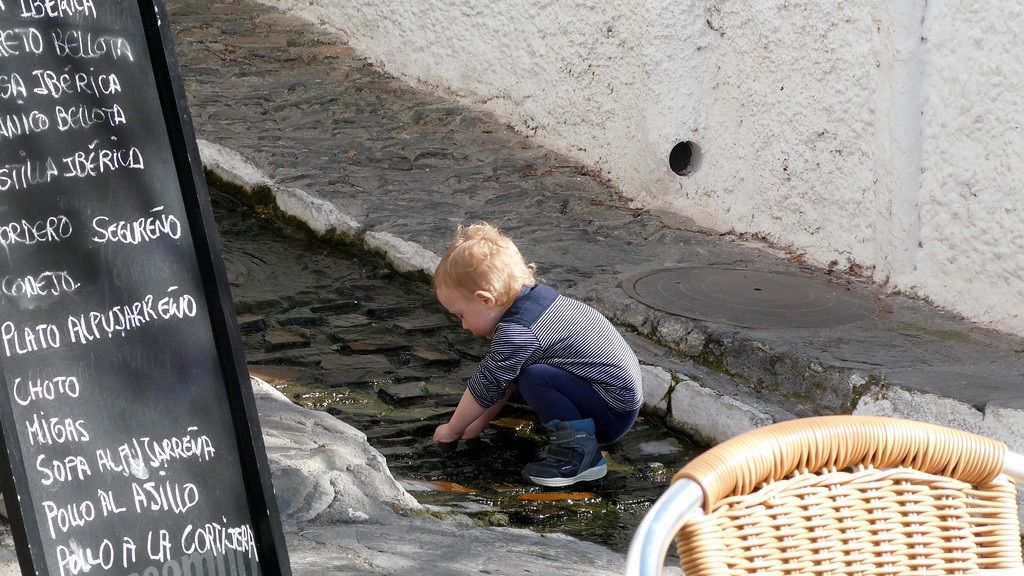 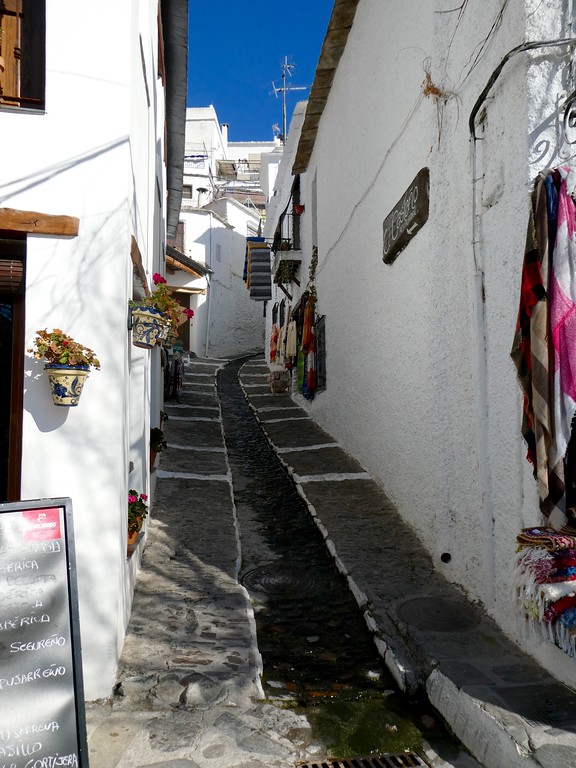 I was sorely tempted to pick up one of the heavenly soft blankets or ponchos that lined the shops here. They were so soft and the designs were quite pleasing! But upon closer inspection, I found the tag “Made in China”. I felt betrayed! I checked a few more items and they all sported Asian sources, so I gave up on finding something to take home from here. 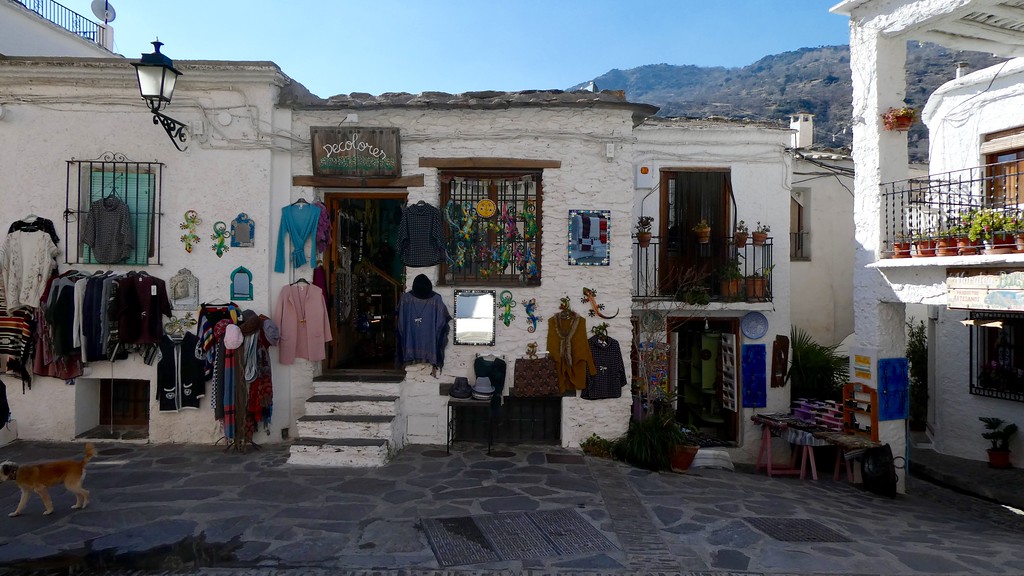 But wait! What’s this? A chocolate factory? 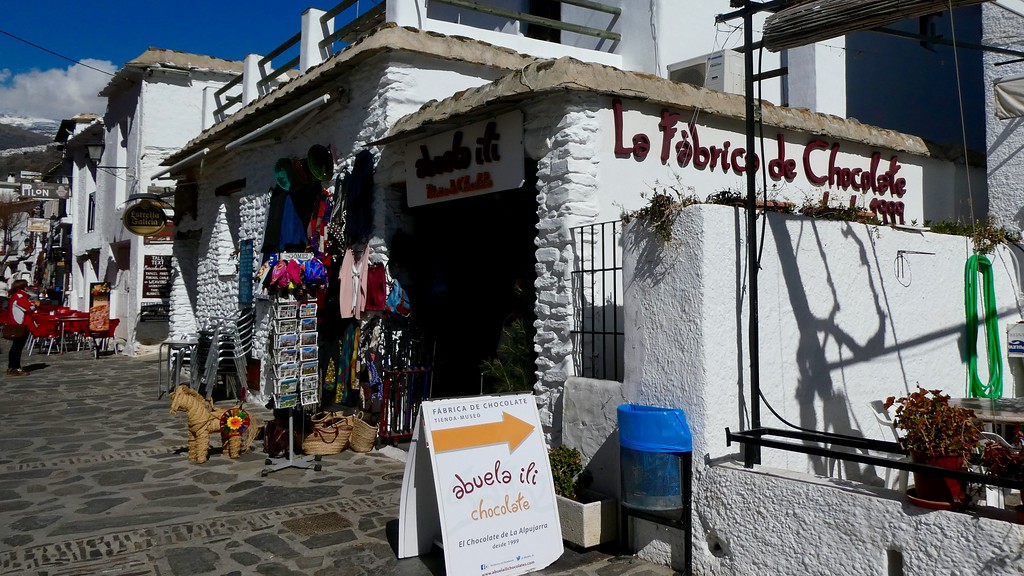 After lunch we returned to the car to make our way back to Granada. It had been a pleasant, although unexpectedly exciting, day so far but it was time to get back to the rest of the group. I was also hoping to avoid Friday afternoon rush hour. 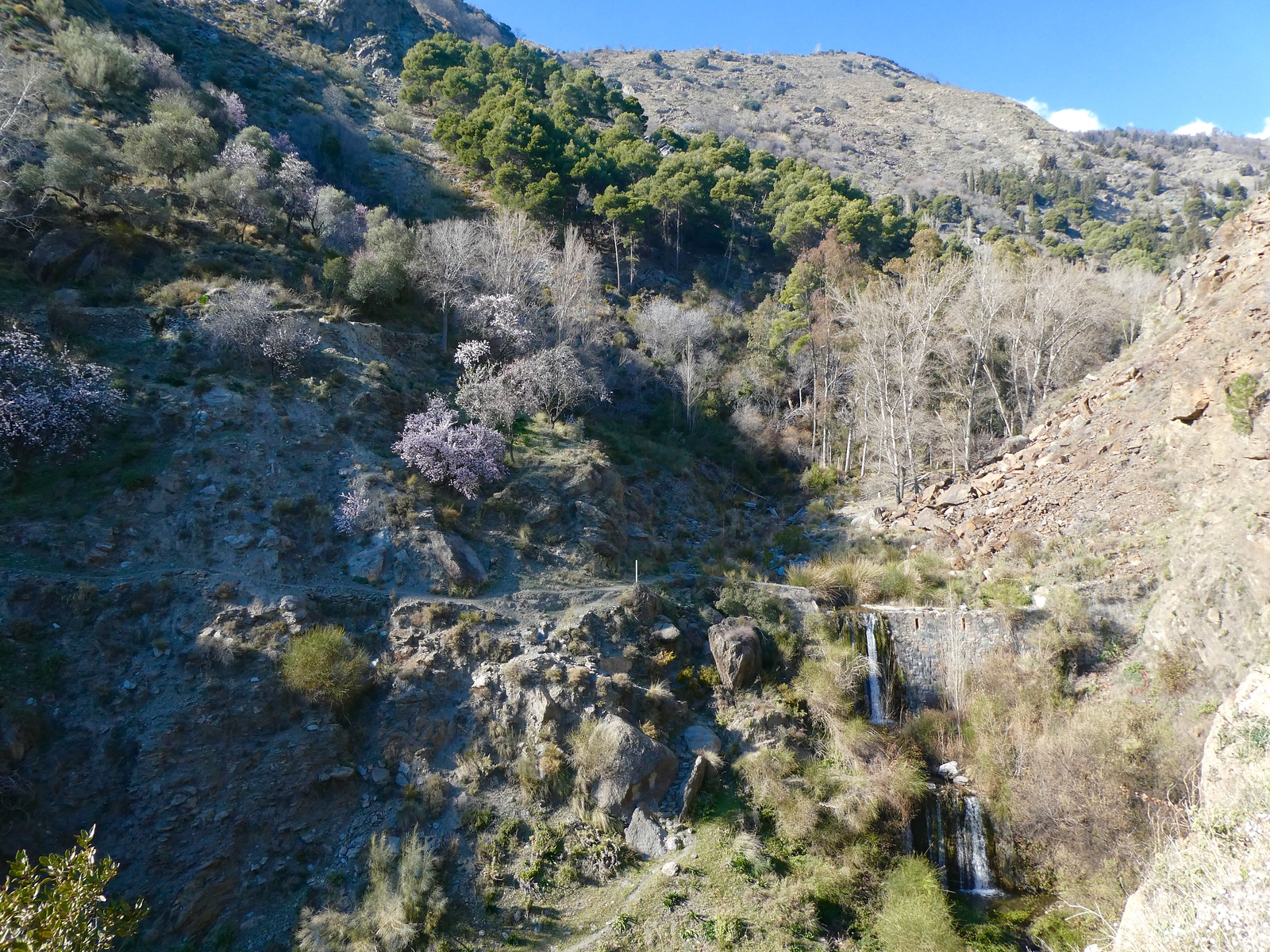 Goat herder on the way home 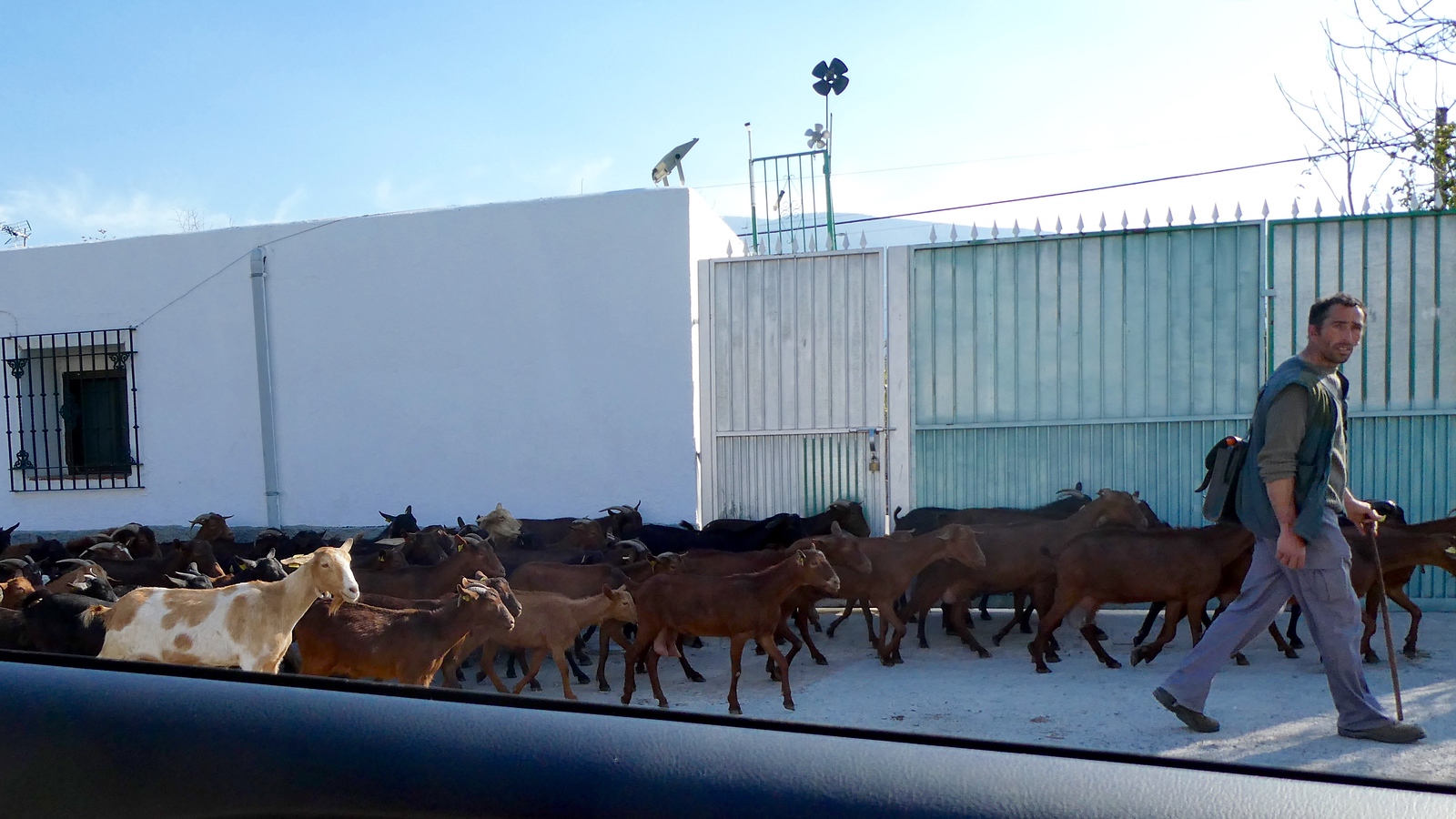 The rest of our day in Granada was rather low-key. Everyone had had a busy day and we weren’t looking for a lot of excitement tonight. Ron, Dan and I ended up just going across the street to an interesting place called La Tabernilla del Darro. We liked it not only because it had a great looking atmosphere, but because it was directly across the river from our hotel. Convenience is key!

And since we didn’t do much of interest other than eat, here are a couple of observations I had during our time in Spain so far:

– I watched a blind man walk by the windows while in the Barber of Seville. I am amazed that anyone can get around cities such as these without being able to see where they are going. The rough cobblestone streets, the uneven curbs, the varying surfaces found throughout – it is a special kind of skill to overcome such things!

– Many people were going table to table in the public spaces, trying to sell “Nike” and “Adidas” shoes. I can’t imagine how this could ever be a successful business venture.

– A lot of tourists that we saw appeared to be from Spain itself.

– Not nearly as many smokers as I expected. But then again, in Switzerland almost 50% of the population still smokes, so anything less than that number is appreciated.

– Our hotel’s Wi-fi was awful – unless you were sitting in the lobby. But trying to get a signal in our rooms was next to impossible. Wi-fi is important to today’s traveler, especially as evidenced when we were trying to research our plans for the next day.

It was our last night in Granada; we’d leave the next morning to return to where we had started: Màlaga. Tonight was the night to relax and prepare for a new adventure!