It was a lazy morning. Ron, Sue and their family left at 10:30 after a quick stop for pastries and coffee at the Berlin Cafe, located just around the corner from our apartment. I was initially considering how to spend our afternoon, since our flight wasn’t until that evening. Unfortunately I hadn’t considered the fact that we had to be out of our apartment by eleven o’clock. I hurriedly packed up our stuff, trying to make sure that the non-carry on items went into the appropriate suitcase. And because we had conveniently been able to park the car at a nearby garage after yesterday’s motorcycle adventure, it wasn’t out of the way to drop off the bags at the car so we could enjoy the rest of the day hands free.

Empty streets on a Monday morning 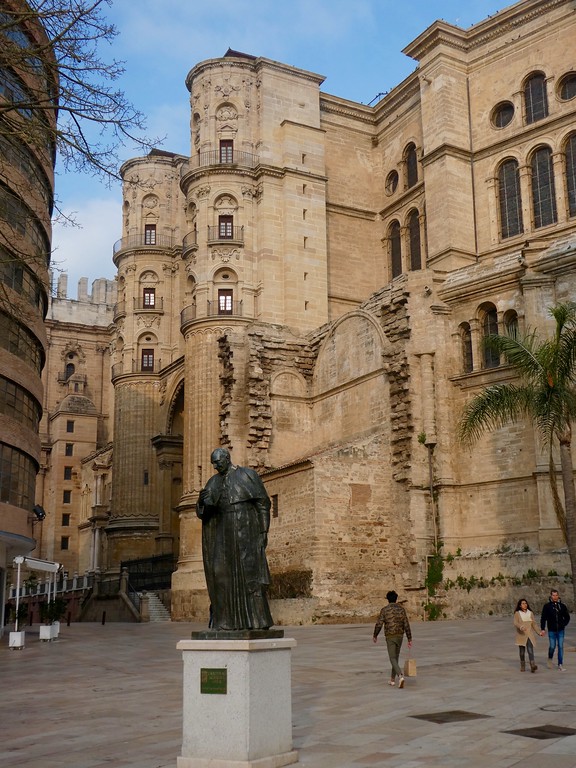 We decided to explore the parts of the city that we hadn’t seen yet, namely by starting at the top. The highest point is the Castillo Gibralfaro, so that’s where we headed.

The walk to the top was a lot steeper than it looked. Fortunately it was still cool out and I was once again happy to be visiting in the off season. Or, more precisely, the shoulder season.

The view from the almost-top

The bullring, with the marina and beaches in the background

When we reached the top I was surprised to see that there was a ticket booth to actually enter Castillo Gibralfaro. I hadn’t realized that there was any specific “thing” at the top and was expecting a simple pile of ruins to walk around. But since it was only 2.20€ to get in, we ponied up the coins and entered the gate, having no idea what we would find on the other side.

The highlight of Gibralfaro was the museum. It had some really great details on the history of the area, including models, costumes and artifacts. We spent some time looking at the information before heading back out into the sunshine to see what else there was to see. 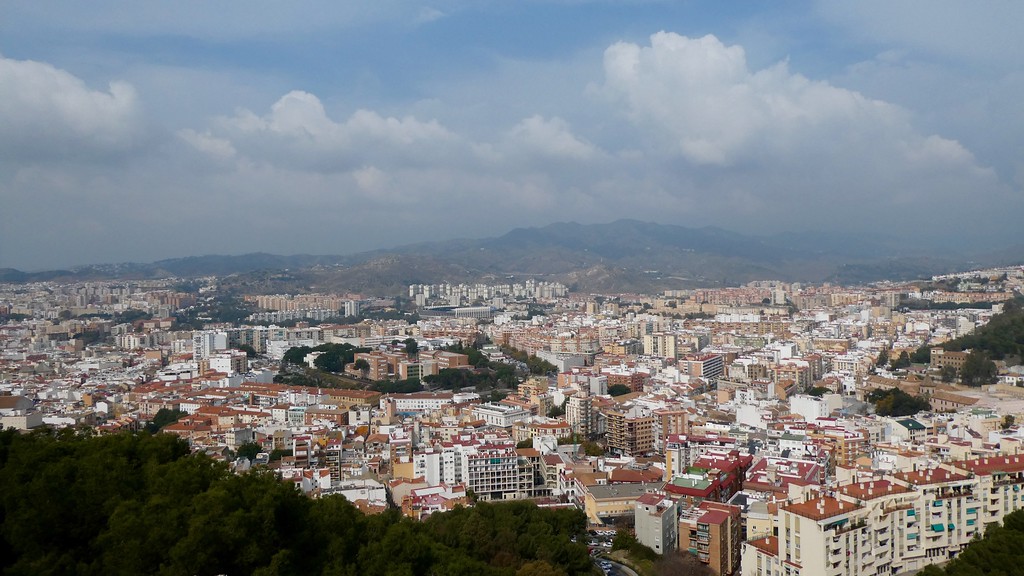 The grounds within Gibralfaro

The Alcazar and Cathedral in the distance

We retraced our steps back down the long ramp we had ascended earlier, commenting that the smooth slate surface would be dangerous if they got wet. As it was, we saw someone slip on the dry stones, they were so steep. We arrived back to the front of the Alcazar but chose not to go in. Sue, Ellen and Randy had visited it the previous day and said that there wasn’t much to see, so we did not feel as though we were missing out.

We did, however, stop to see the Roman amphitheatre that was being dug out since it was right there. 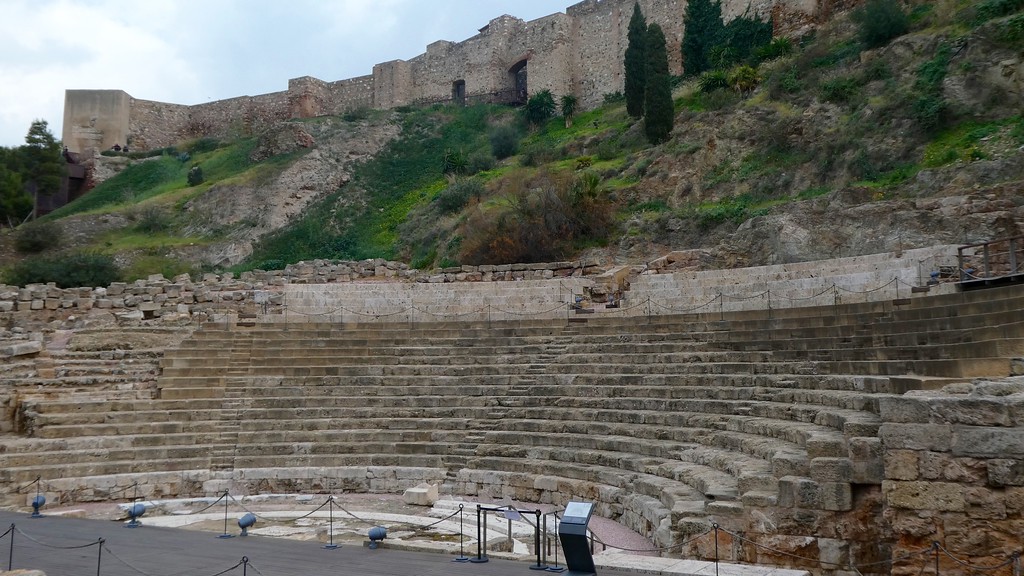 When Dan and I first arrived in Màlaga and had to park the car further away than intended, we ended up passing by a large market (the Mercado Central de Atarazanas). Now that we had “time to kill”, we wandered back over to that corner of the old town to check it out. It was beautiful! 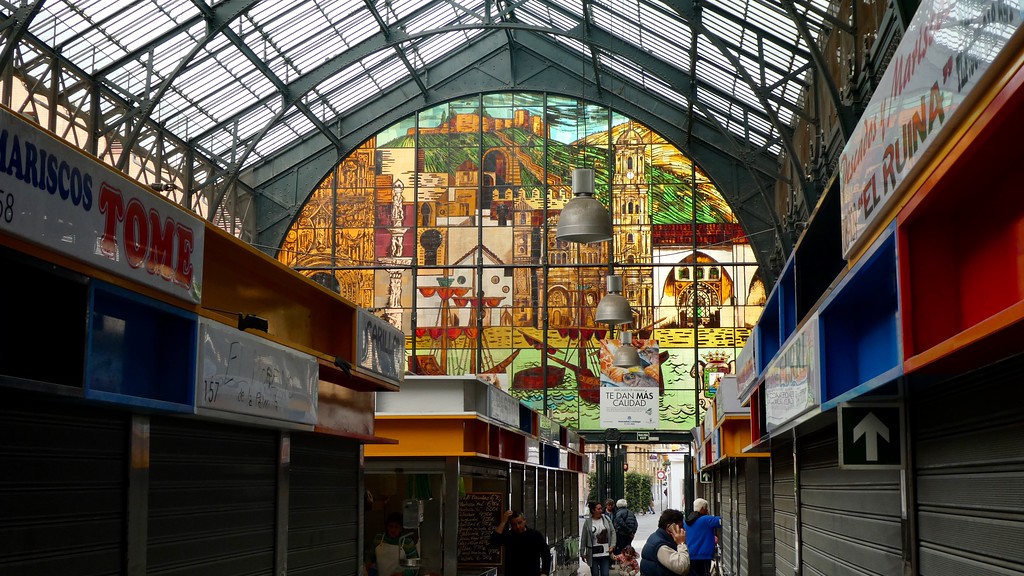 The interior was full of stalls, although on this quiet Monday morning a good number of them were empty. But the ones who were open displayed a beautiful selection of fruits, vegetables, meat and seafood. I wished that I needed something to cook! As it was, I promised my cat-sitting friends that I’d bring them back some fresh sheep cheese, so I made it a point to pick something special for them. 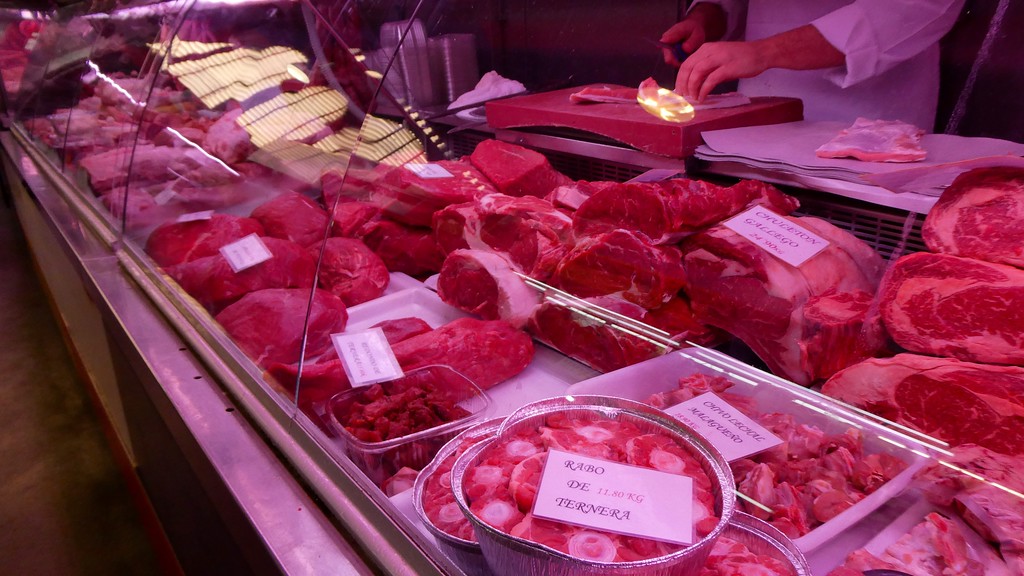 As we exited the market, a light rain began to fall. We took advantage of this to go find someplace for lunch, and luckily stumbled up on Tandoori Mexican, a tiny place that served a delightful combination of Mexican and Indian dishes. 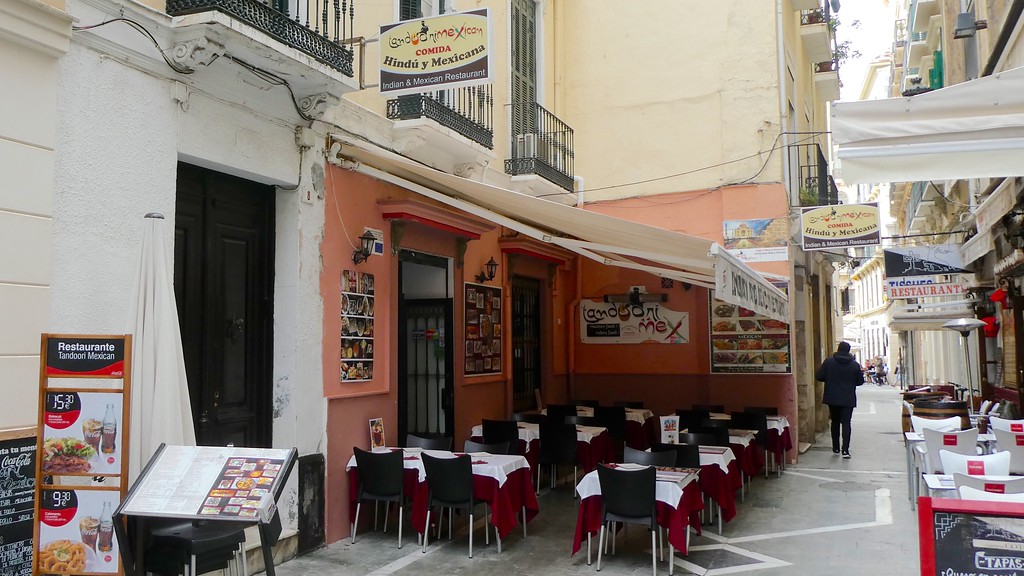 I finally had the burrito I had been craving for a while, and Dan had a good curry. Even though we ate particularly slow, and Dan sipped his beer, we were done long before we had to be anywhere else. The rain had picked up slightly and the idea of wandering around and getting wet was not very attractive. So instead we went into another food store and bought some treats to enjoy later. Mmmmm – good call!

We gave up on Màlaga. Our time left here was limited and with the rain, our choices were limited. I took some parting shots as we made our way back to the car. If nothing else, we could sit in the relative quiet of the car and relax a little bit before we had to get to the airport.

The “quiet time” in the parking garage didn’t happen, as some poor soul was fighting with his car alarm for a solid ten minutes. We finally gave up and drove off, returning the car early and finding a comfortable place to bed down in the terminal until our flight. I appreciate the fact that airports have become mini-malls, offering shops and restaurants that are at least a nice diversion, even if I don’t buy anything.

The flight was uneventful and we were home just before midnight, greeted at the door by some very sleepy kitties. Spain had once again proven to be a worthy vacation destination and we will not hesitate to return.