This was to be another busy day for Ron, Dan and I. We had made reservations for some dual sport riding in the mountains. It was a quick drive to LetsRide Spain, the headquarters of a good-size KTM off-road riding business. Kevin and Moira, the co-founders, were incredibly friendly and welcoming. It was clear that they had been in the business for a while, as they had the process down pat. The paperwork, gear, clothing, helmet, boots and even gloves were all passed out for us to put on.

A second group was getting geared up at the same time, but the three of us would be under the care of our own guide, James. We were led to our bikes for the day: KTM 350 EXC-Fs, and after a brief overview of the day, we started up our bikes and were soon off, following James along some very narrow paved roads.

It was weird to ride the KTM: it was a complete departure from my BMW F800. The most difficult thing to adjust to was the position of the rear brake pedal, as it was tucked in close to the engine. After finding it once or twice and locking up the rear wheel with it, I realized that its nearly inaccessible placement was on purpose.

The bikes were light and nimble and the suspension was amazing. James led us through open forests, following a dirt road as we gained elevation. The bike felt good under me and the weather was perfect. Summertime temperatures can easily reach 35° C, so having it sit around 16° C was perfect for me. I would have preferred a slightly clearer sky though, as I had been looking forward to some more mountain views. 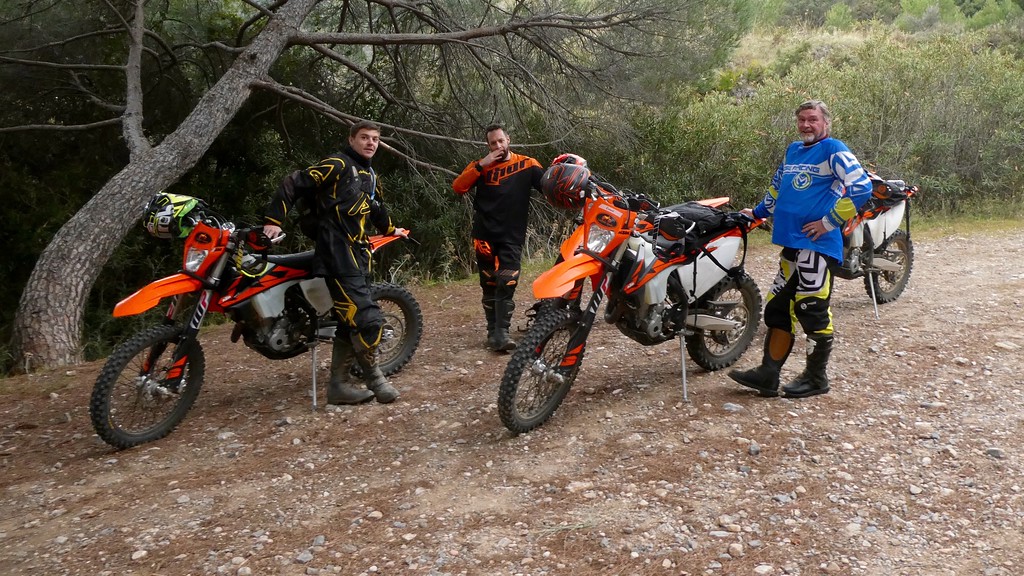 At this point James mentioned that we had a bit of “technical track” to cross in order to continue our ride. We were up for it! We had been given light backpacks back at the shop and in there we carried bottles of water and anything else that we wanted to carry. I carried my camera, but unfortunately because I could only carry it in the backpack, it didn’t come out very often. James tried to pick up the slack and took some photos of us at key points along the route. 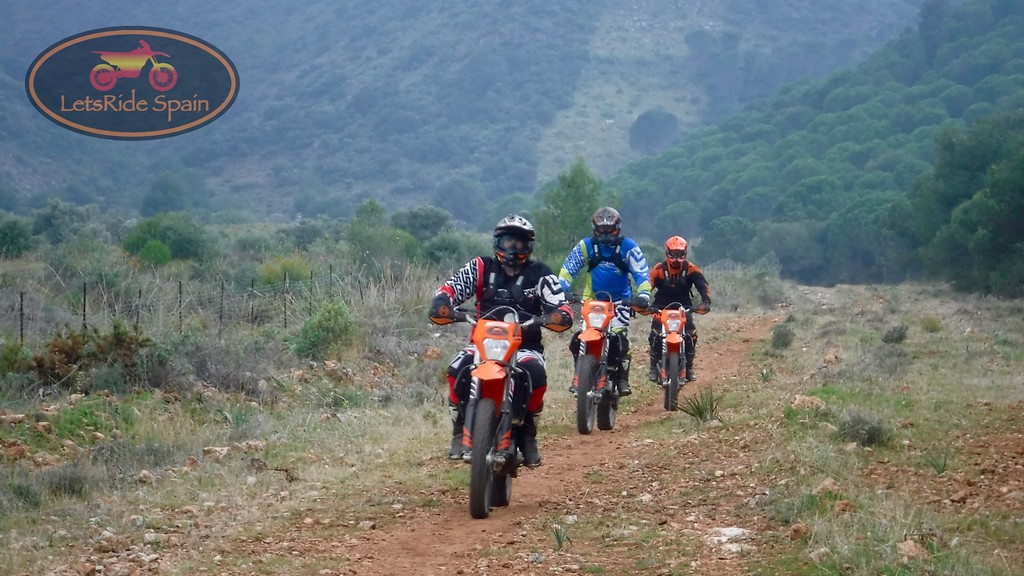 I am out of shape. It is so much easier to ride a bike like this standing up. You get better control of the bike, hitting the frequent rocks and ruts was more comfortable and the overall center of gravity is lower. But I couldn’t do it. Sure, I stood up for brief sections and really enjoyed my time on the pegs, but it didn’t take long before my thighs begged me to sit back down on the seat. Clearly, racing in the Dakar next year is out of the question.

A water break after a small water crossing 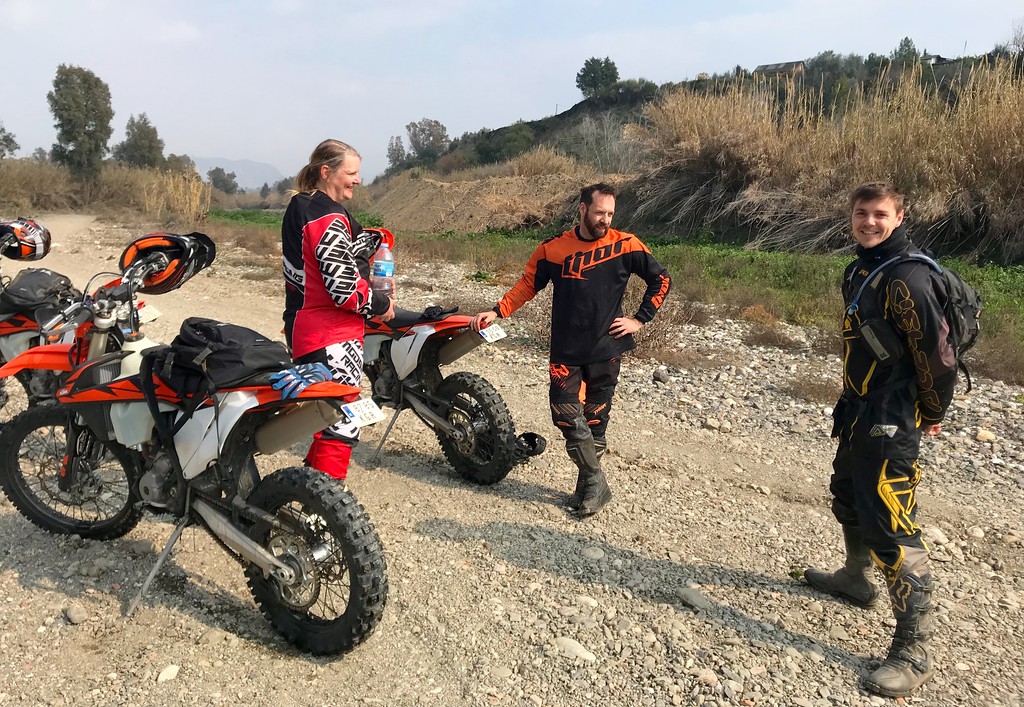 Here I am, not standing on the pegs

Ever since our first water break that morning, I had trouble with the fit of the helmet and goggles: I could not keep them “up” and out of my eyes. It felt like the goggles were constantly on the verge of slipping down over my eyes, and the helmet “bill” seemed to be too far down, limiting my view further down the trail. At each stop I tried to adjust things, but it became a constant source of irritation for me. Upon reflection, I wonder if having handle bar risers would have solved the helmet bill problem, as I would be naturally standing up straighter and therefore my line of sight would be higher. Oh well, it is what it is.

We descended back down the mountain into the lower valleys of the region. Our trail was often shared by others enjoying the day, but they were on horseback or foot and we passed them carefully so as not to cause any problems.

James took us along a riverbed, where we followed a trail that only James could see. Egrets and herons took flight at our approach but there wasn’t much else around to disturb. It was great that we had James as our guide. For one, he was very personable and outgoing and two, he knew where to go – most of the time. There were a couple of time that we had a very short backtrack to take a turn that he had overshot. He said that he hadn’t done this route in a while so there were a couple of spots that he overlooked. From my point of view, he did a great job, as there were so many numerous, otherwise unremarkable turns that I can see how it would be hard to keep track of them all. 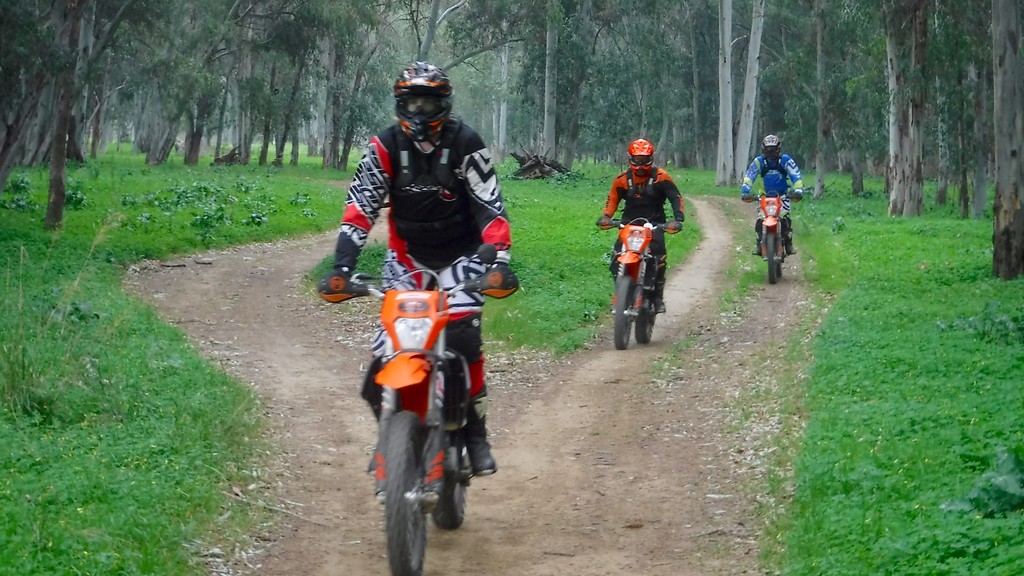 While I was reviewing the various companies to ride with in this corner of Spain, I noticed that LetsRide included “water and lunch” during the ride. I assumed that this meant a bottle of water and a pre-made sandwich to be brought out on the side of the road somewhere. I was wrong.

Instead, our route took us back to pavement (this is why we needed to have valid street licenses) and to a roadside restaurant. A real restaurant! A waiter came over and gave James a list of lunch options, which he then translated for us. We could have our choice of any of the offerings, as well as something to drink in addition to the water we already had with us.

After lunch I made a small request to James: could we take the pace down a notch? He is an excellent rider (of course), Ron has had many years on dirt bikes and Dan was having a blast. But I was getting tired. Not just physically, but mentally. I knew that I would end up pushing myself to keep up and then target-fixate on some big rock or something and crash. Sure, we had armor under our clothes, but that didn’t make the stones in the road look any softer. He seemed agreeable to it, but I’m not really sure if he remembered my request once we got back on the bikes.

Directly after lunch we went back to dirt roads and gained some elevation. I had also mentioned to James that I was a little disappointed not to be able to take more photos. He was kind enough to stop here, since I had specifically mentioned the blossoming tree-covered hillsides.

Dan, looking a little bored with my photo-taking 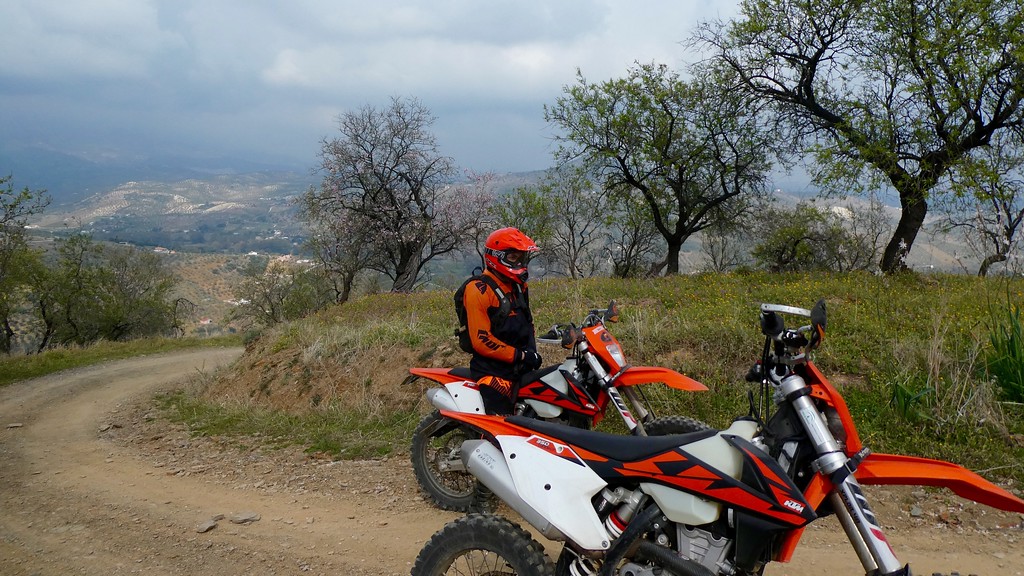 At this point I had mentally given up on any real dirt riding. The guys raced ahead, disappearing into the trees and around corners. I followed the dust and caught up to them when they had stopped to wait for me. I was still fighting with goggles, annoyed to the point that simply took them off and dealt with the dust without them – it wasn’t like I was right behind them anyway at this point.

I was also feeling my knee guards: the tops of the protective plastics were pressing into my kneecaps and causing a sharp discomfort. The transition from standing to sitting made this most noticeable, and I tried to shift them into a more comfortable position when I could. My efforts were futile, as the angry red marks were still visible two weeks later…

I gave up: no more standing

In the picture above, I pulled up to Dan and he indicated the steep trail cutting the corner. He excitedly said “We went down that!” “That’s nice” I replied in a desultory tone. I really was having none of it by this point.

James had promised that the rest of the route for the day was a long, easy descent. Judging by how far behind I was, it was easy for the guys. I rolled slowly down the dirt roads and cursed silently in my helmet. It was like hiking with Dan: the word “with” being an optional term.

The view from our last official water break

From there it was a fast ride back to LetsRide headquarters, with a quick stop to top off the bikes before we returned.

The second (more advanced) group returned when we did, so there was a flurry of activity as gear was shed and the bikes were rolled into the garage for a quick service. Everyone was in good spirits, as it had been a perfect day for riding.

Putting the bikes away 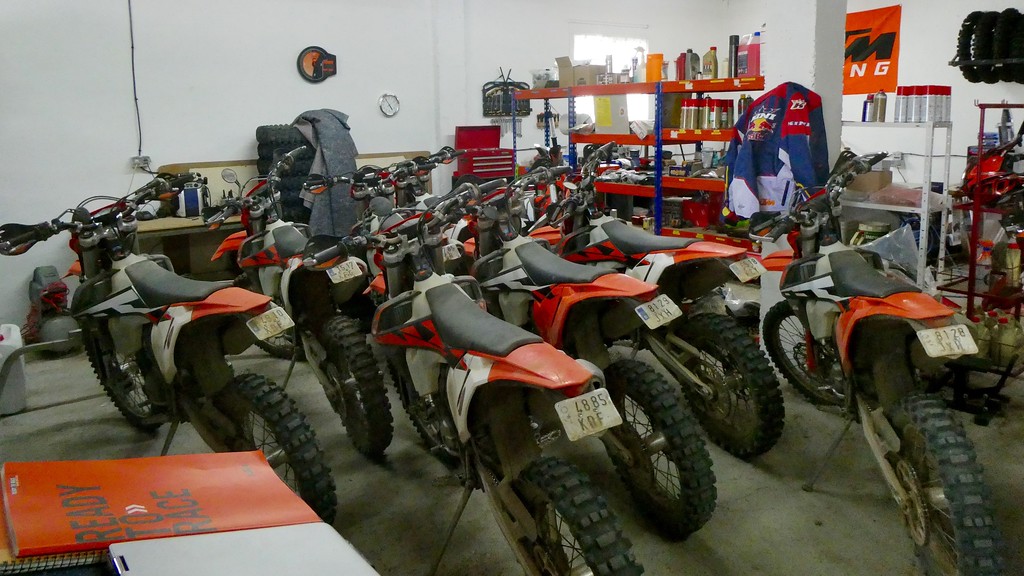 When we returned back to the apartment we spent the time kicking back and relaxing. Dan and I would be flying home tomorrow while Ron and Sue would be heading to Madrid and then to Seville. Since Dan and I had already been to Seville, we were able to help them find a good place to stay when they got there.

The continued search for dinner – checking out the menu

Another menu to check 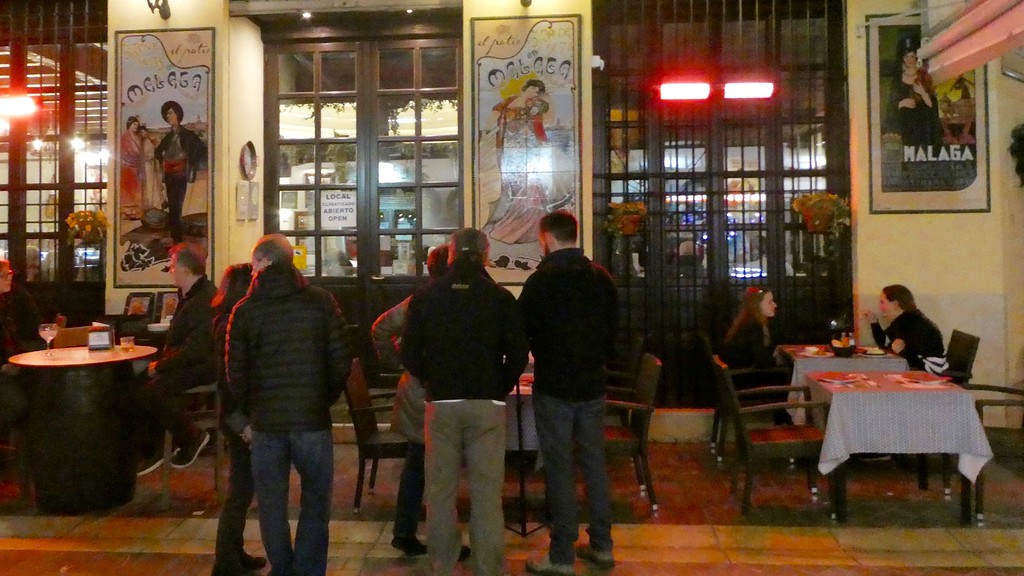 Finally! A decision is made!

Unfortunately, our choice for dinner (Central Beers) was a poor one. The food was ok, but our meals came out at such staggered times that half of us were finished before others were even served. Our waitress was pleasant but harried. We had to ask multiple times for items for the table and the staff stood in the doorway for their smoke breaks, letting the smoke filter into the restaurant and directly to our table. At least the beer was good and cheap.

We got out of there as soon as we could and spent a little more time in Màlaga’s brightly lit streets, but Màlaga closes down early on a Sunday night and once ten o’clock struck, there was little to see. It was time to go back to the apartment and get our stuff ready to pack in the morning.