Our friends Ron and Sue from Seattle were planning a two week holiday to southern Spain and invited us to join them for part (or all) of it. It had been a while since we’d seen each other and besides, the middle of February is generally cold and grey in Basel, so what better solution than to escape to a warmer climate? Also, we had already explored northern Spain and knew that southern Spain in the summer would be unbearable. Now was the time: let’s do it!

The trip started great with the pleasant surprise of exit row seating in the airplane. Bonus!

A mere two and a half hours later we landed in Màlaga, Spain. It had been a smooth flight and we were eager to get our rental car and begin our vacation in earnest. We wouldn’t be meeting up with our friends until Wednesday and it was only Sunday. I had planned out some things to do until we met up with them in Granada, but first we had to find our rental car. It took a bit of searching as the signage at the airport was less than helpful, but once we found the car I realized that I should have refused the unasked for upgrade: the Toyota Avensis was huge. Sure, it was quiet and had good power, but I would resent the size when it came time to park it in the tiny slots of the local parking garages.

It seemed to take a long time to escape the busy towns and roundabouts but we finally hit the countryside. And I knew we had reached that point when we saw a horse and rider dancing by the side of the road. Welcome to Spain! 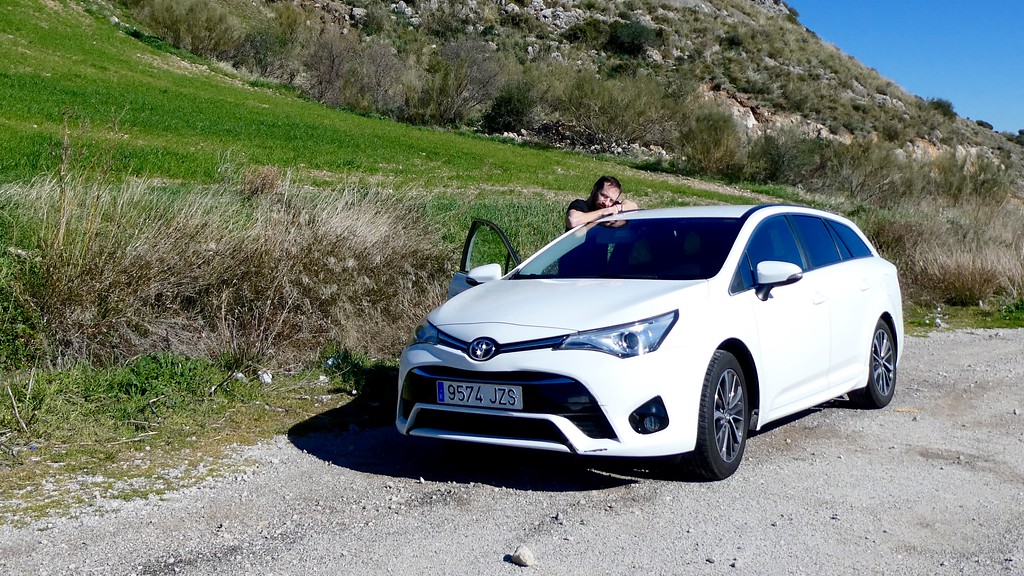 We made a quick stop for snacks and drinks and then drove deeper into Spanish countryside. It had been harder than expected to find a place that was open, since most business are closed on Sunday. Fortunately, gas stations generally don’t follow this trend, so chips and Monsters were readily available. Our goal was the beach town of Cadiz and we were taking the back way there, skirting the northern edge of Sierra de las Nieves Natural Park. It was a great route and we saw so many beautiful scenes along the way. A surprising number of bicyclists were on the road, but there was not much else. Along today’s route was the town of Ronda. In my research for this trip this name had come up as a worthy place to explore, so we found parking and checked it out.

Our first stop was a wine store, of course 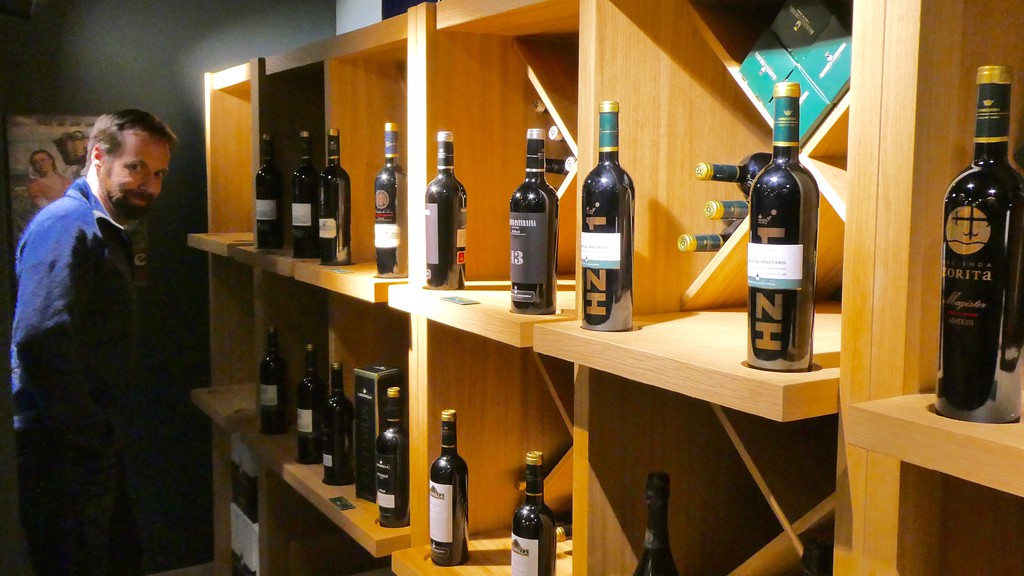 Where we also bought some fresh Iberian ham sandwiches for lunch

They had some great artwork on the walls, too

We had parked at one end of town and ended up walking a ways before we found the more touristy area, and the physical attributes of the town. It was worth the walk!

The town sits up on a high ridge

A ridge that is bisected by a river 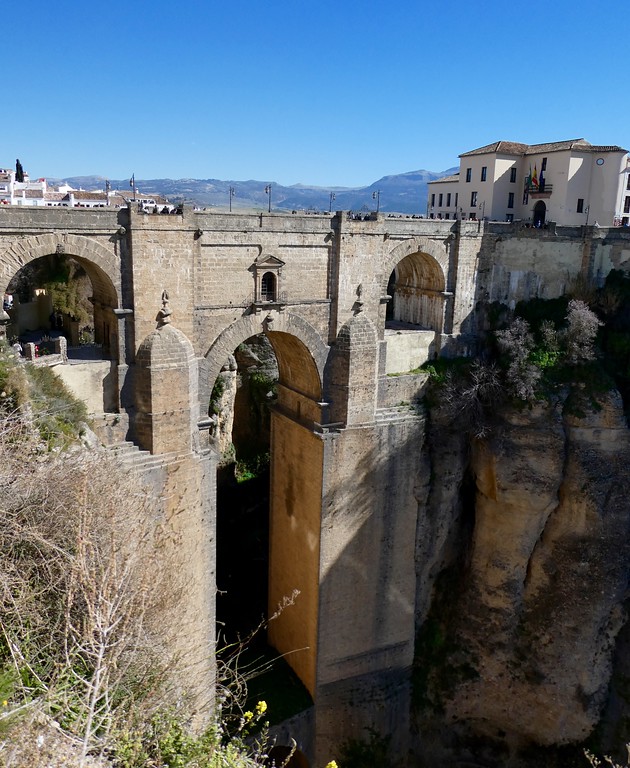 The river as it cuts through the other side 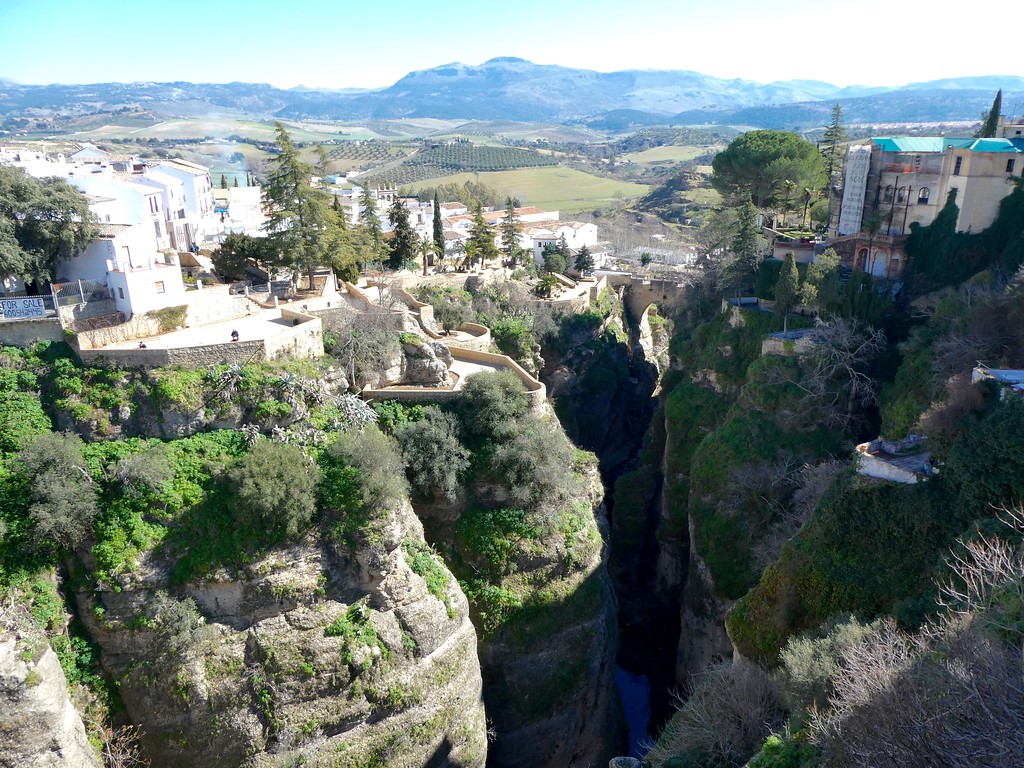 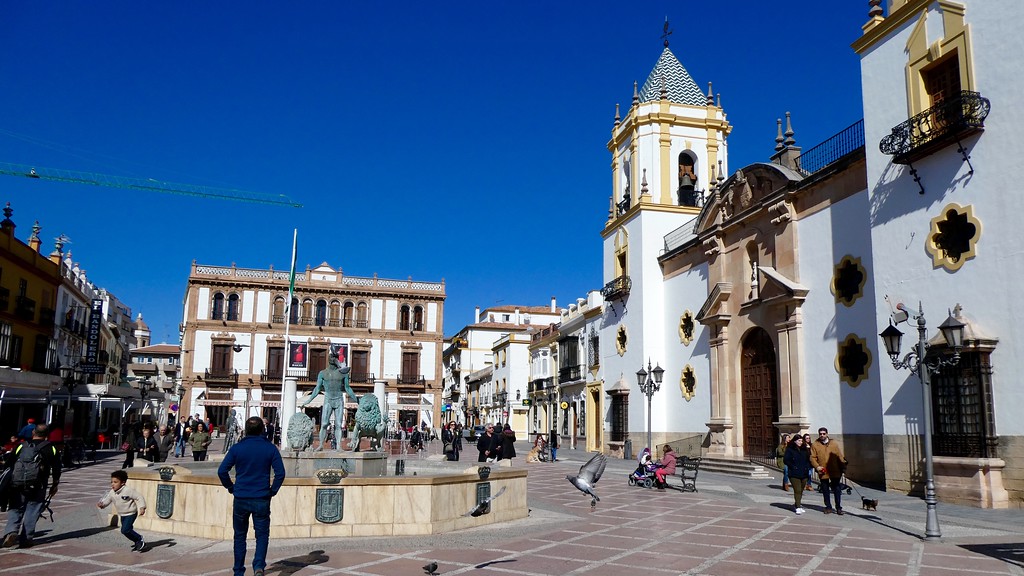 Outside the bull ring 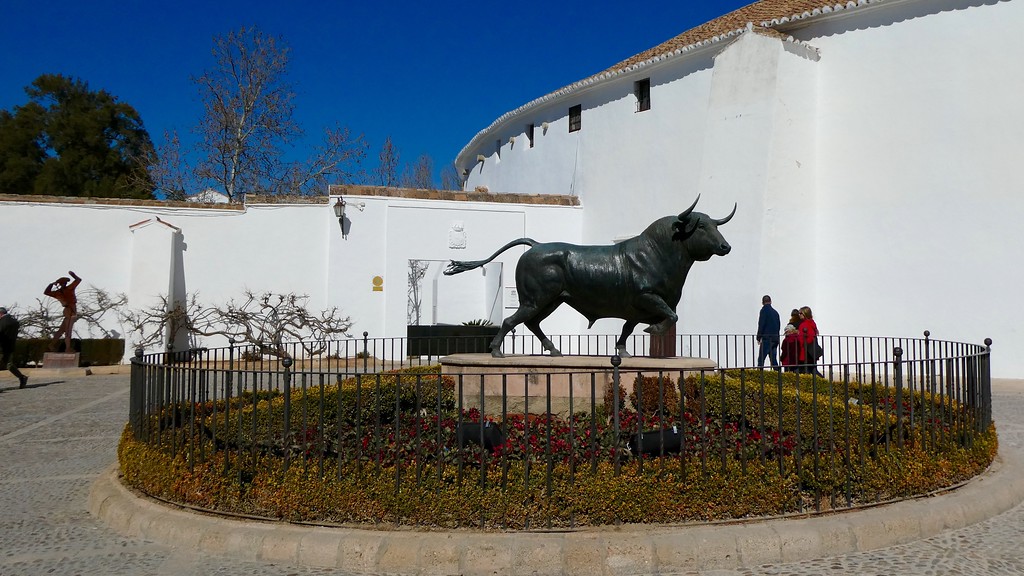 The town was crowded for its size, most of them tourists. I didn’t realize just how famous this town was until I was elbowed by a Chinese tourist. Typical. This also pushed my limits of tolerance and we headed back to the car to continue our journey.

It was taking longer than expected to travel the rest of the distance to Cadiz, but the scenery was so enjoyable that it didn’t really matter. The roads were fantastic, too, and very few other cars were on them. Wind turbines and solar panels were a common sight. Let’s go for some more pictures. 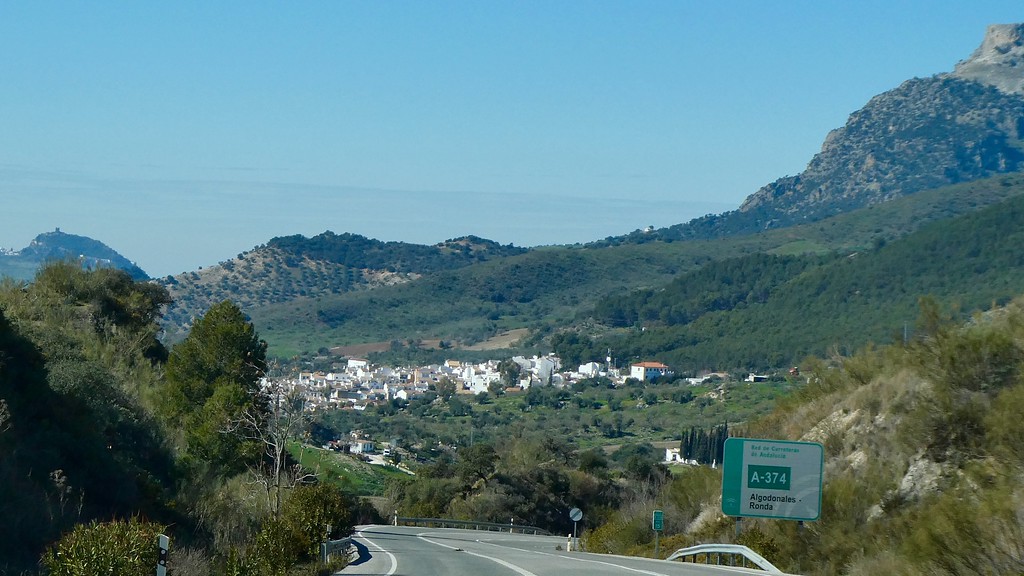 I saw a lot of intensely green fields and wondered what crop was growing. Dan, of course, had the answer: “Wallpapers“. Such a funny guy.

We were getting close to Cadiz. The city is actually an island and we crossed on the lesser-known of the two bridges. The GPS sent us on a couple of dead ends but we eventually found our way into town – and into chaos.

The cause of the chaos in Cadiz 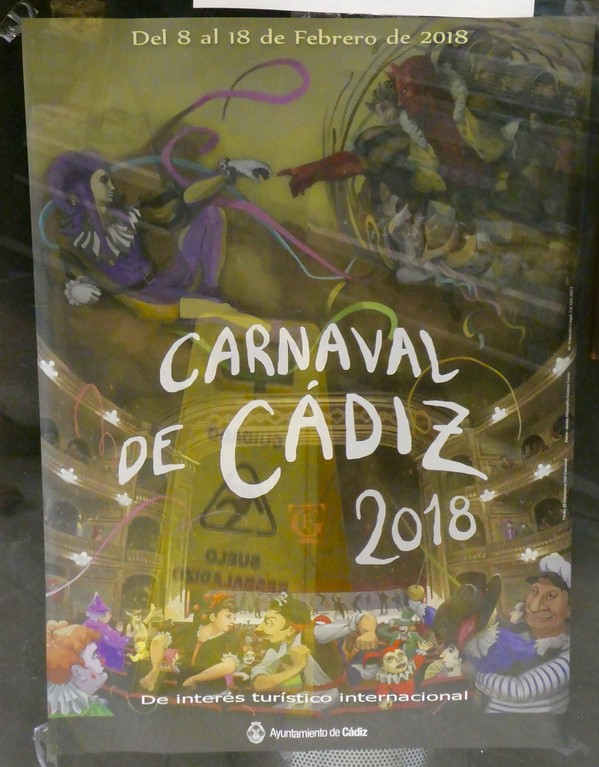 There were hundreds of tour buses, thousands of people and roads were blocked left and right. Our GPS tried in vain to get us to the parking garage nearest our hotel, but between the blocked roads, one way streets and crowds of people, it was an impossible task. We eventually gave up and drove to the far side of town and left the car in a different underground garage. It was a twenty minute walk back to our hotel, with bags in tow, but at least it was fun to see the people dressed up in their outfits and face paint.

Our receptionist at Hotel Monte Puertatierra was very pleasant and gave us some information about the carnival. Not all of it was accurate, but at least we had more of an idea of what to expect. We hurriedly took our bags to our room and went back out to enjoy the start of the parade that would pass right by our hotel.

We didn’t have long to wait. 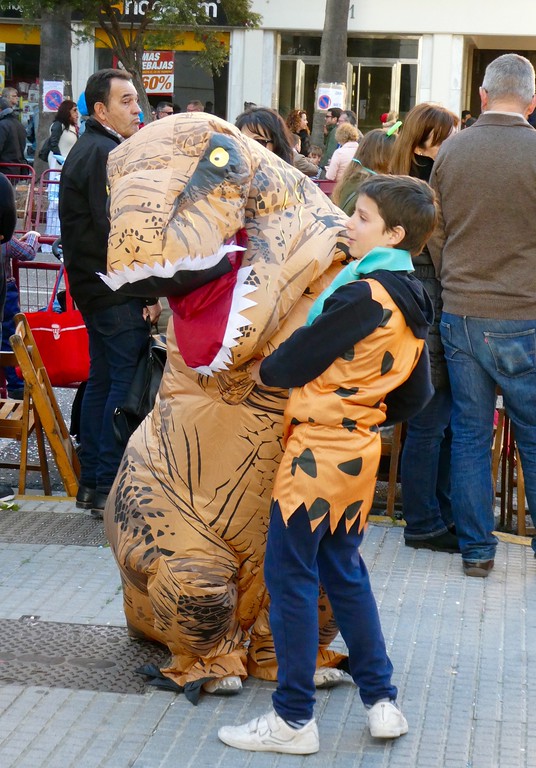 People line the streets in anticipation

There seemed to be no rules for this parade. Small and large groups marched by in their costumes. Some played music while others blared it from speakers on their motorized floats. Some of the floats were impressive, huge and loud. Some were merely children’s wagons being pulled along. It was a bizarre thing to watch. 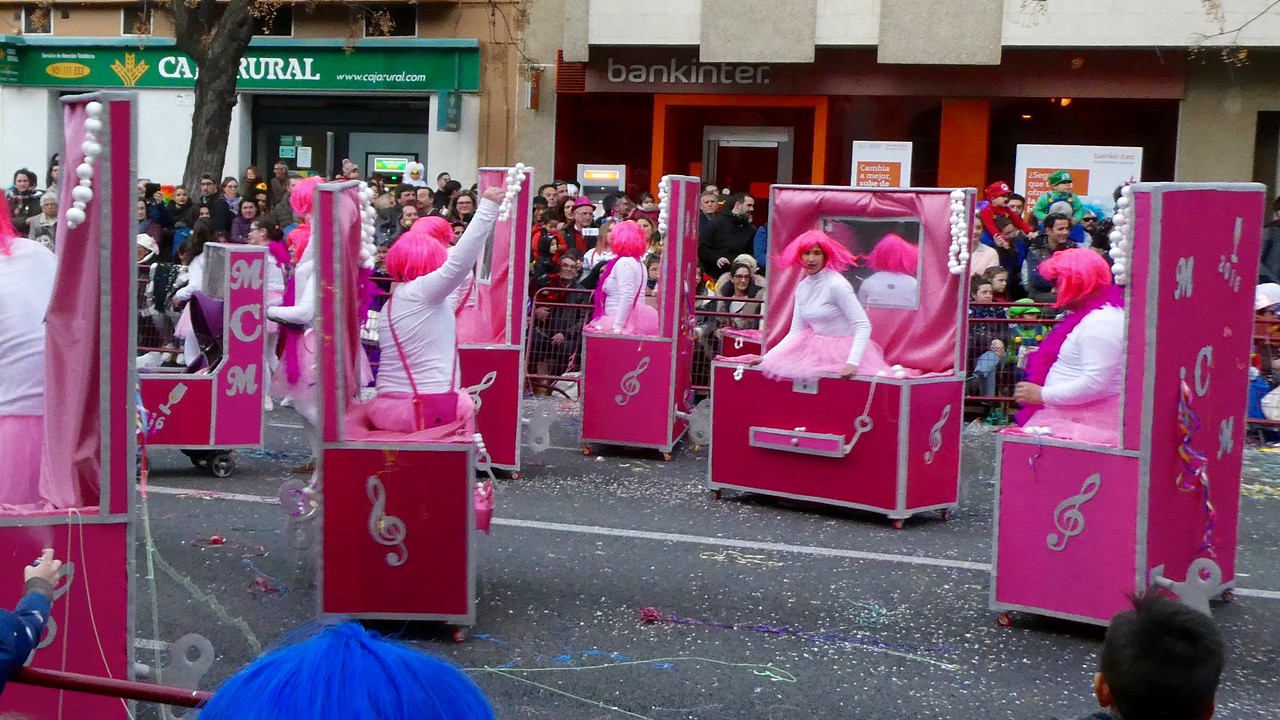 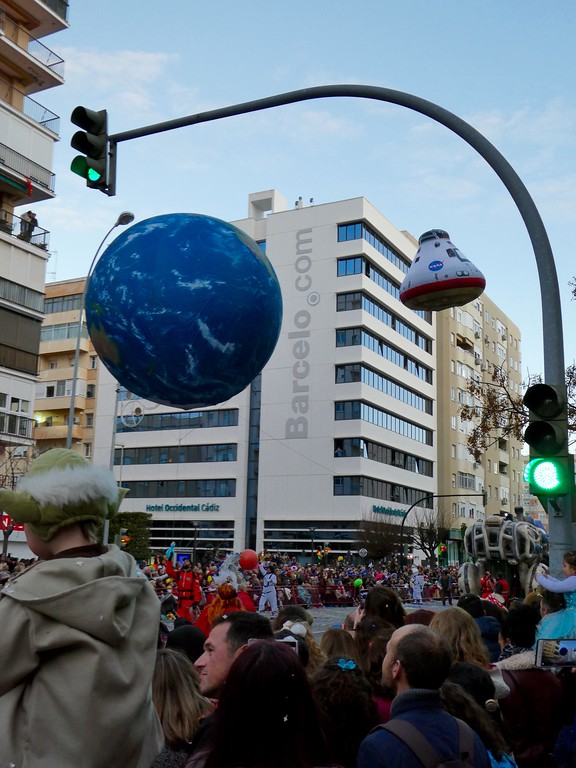 Everyone got into the act! 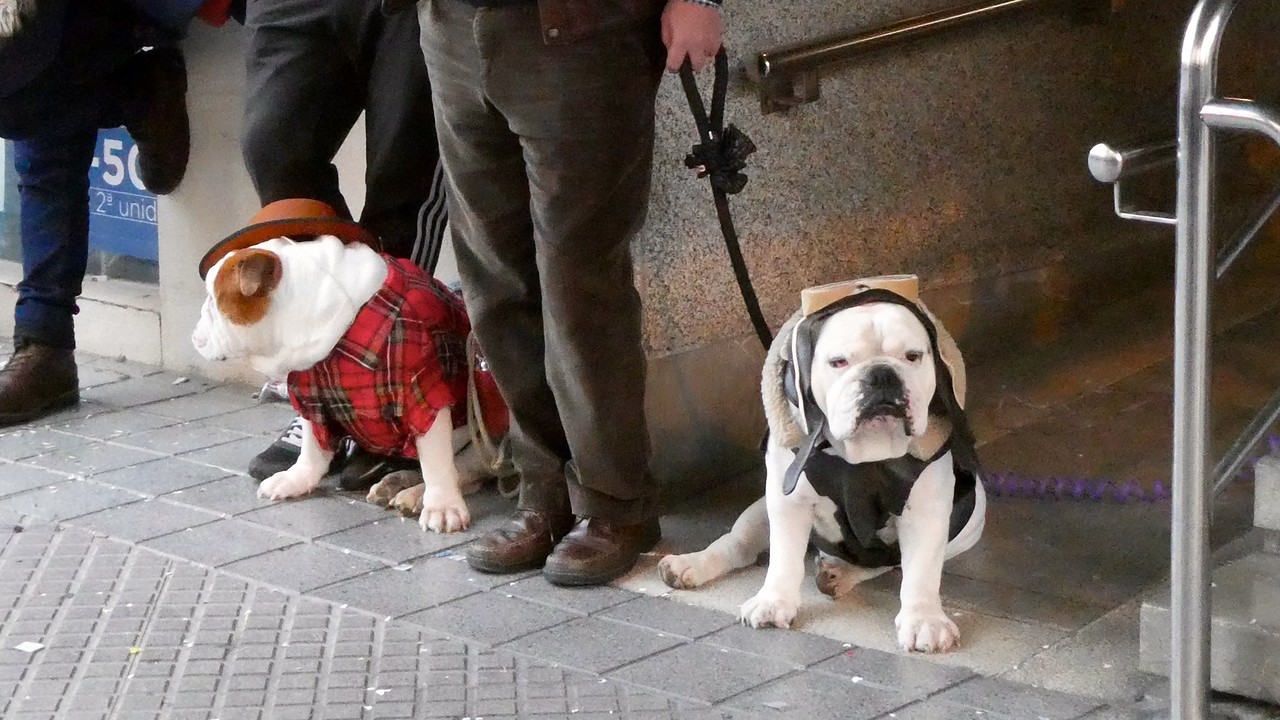 I was determined not to miss my only chance of a sunset on the Atlantic Ocean. I dragged Dan away from the parade and we walked the couple blocks to the beach. It was perfect timing, and we spent the next ten minutes watching the sun sink below the horizon. 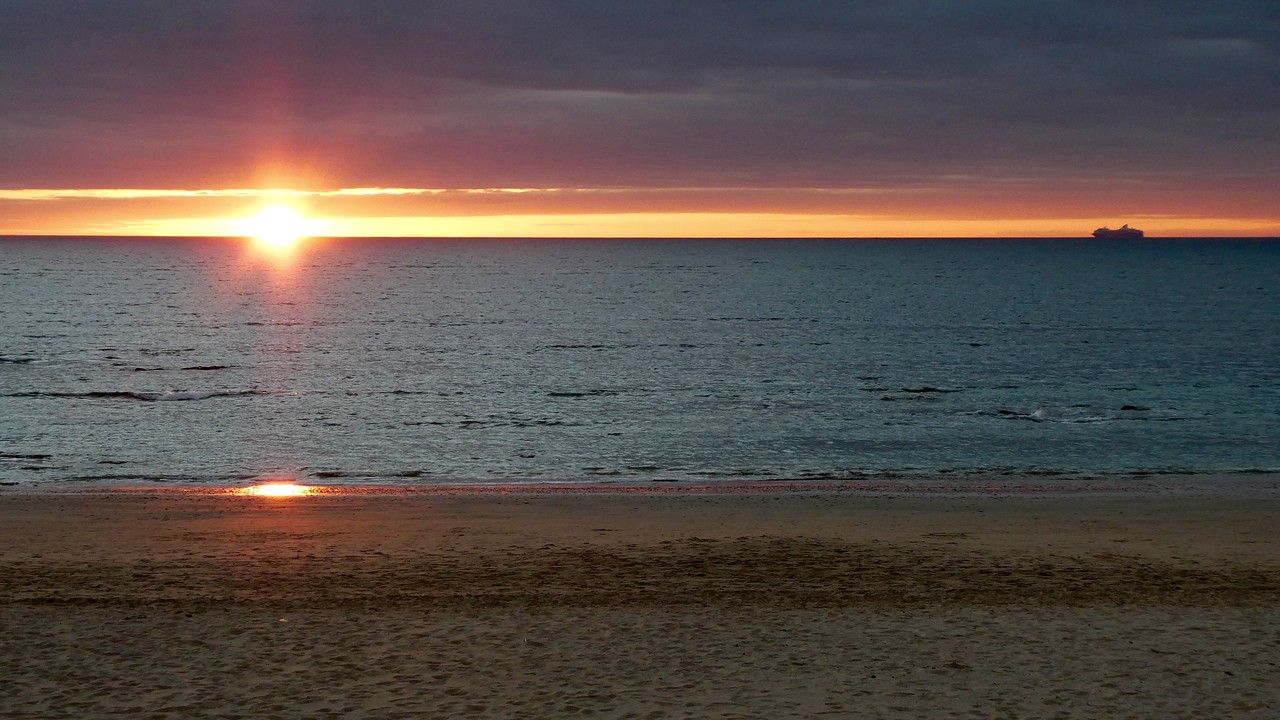 And then it was back to the parade! 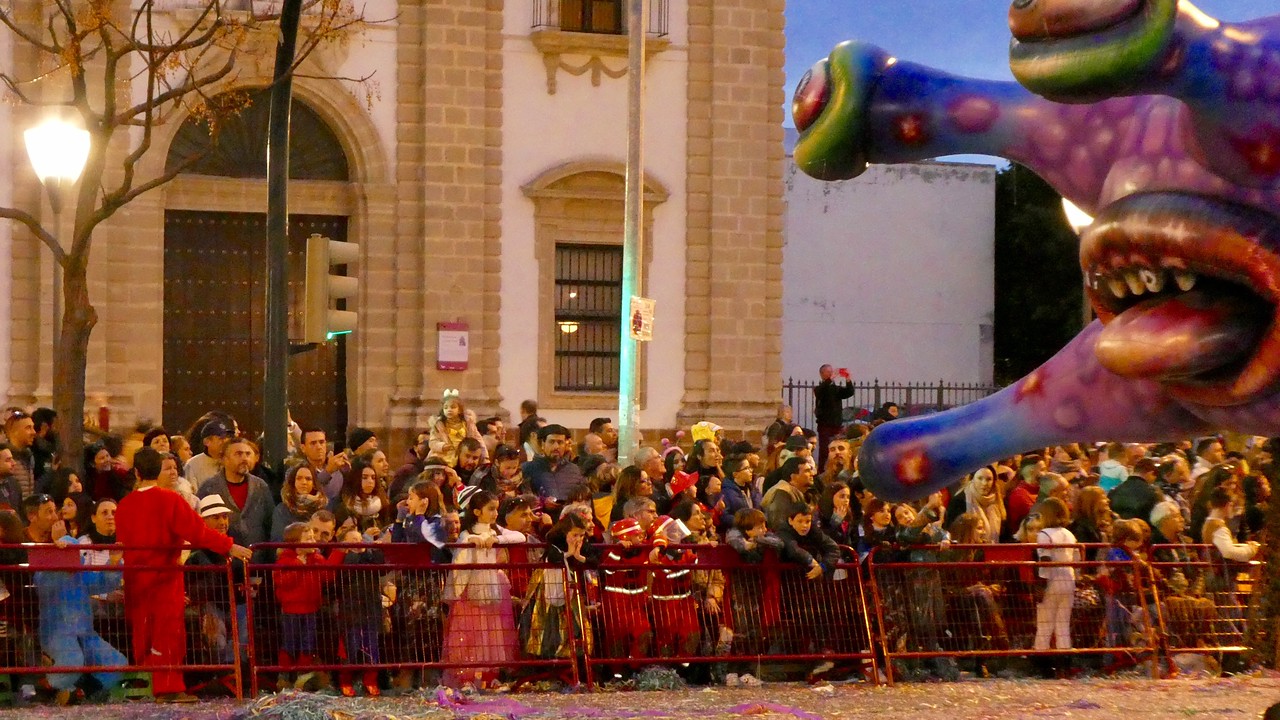 The parade was over. Dan and I were still mulling about the groups we had seen and just what it all meant. According to Wiki, the Carnival is quite famous (“one of the best known in the world”), so perhaps the parade was just a small part of the overall festivities. But now it meant that it was time to eat. Our hotel receptionist had recommended Restaurante La Despensa and since it was directly near our hotel, we gave it a try. We were seated next to the only other occupied table in the place, where a couple of women were talking. Or I should say, one woman was talking – and she continued to talk for the entire time we were there. She never stopped once. But while she told her stories, we enjoyed a nice meal and watched the carnival crowd pass by the window.