The plan was to leave Seville early. My chance to visit the cathedral was gone, as it didn’t open until 11 am (according to the website, but it also hand’t mention being closed on Tuesday, so….). Getting the car out of the parking garage was easier than getting it in and we were soon on our way to our next Spanish city: Granada!

It was only three hours to Granada but we had a deadline: we were to meet some friends at our next hotel at 1 pm. This meant that there wouldn’t be much time to explore along the way. But something caught our eye when we got close to Estepa. High on the hill was a prominent Alcazar (Alcazar Palacio del cerro de San Cristobal) and an even higher hill behind it. It was a good a time as any to take a break.

Dan navigated us through the town and up the hill. We decided to bypass the Alcazar and instead see what kind of views could be had from the end of the road. The pavement narrowed and wound its way around the backside of the mountain and then ended at a radio tower, guarded by a very energetic barking dog behind a fence. Dan and I retreated back down the road a bit in order to not antagonize the dog and parked the car. We took a short stroll around the area, enjoyed the views and then got back on the road. It had been a good detour.

Our view from the radio towers

Walking among the rocks

Blooming trees on the hillsides

Driving back to Estepa 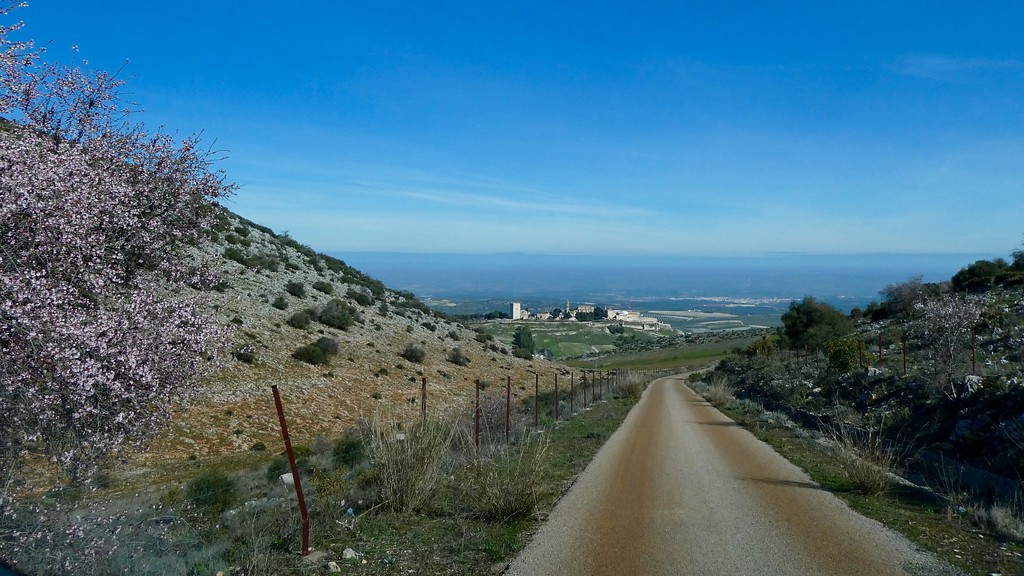 Back on the road again, we made the distance to Granada quickly. It was a clear day and we could see the snow-capped peaks of the Sierra Nevadas in the distance, when there wasn’t smoke or smog in the way. 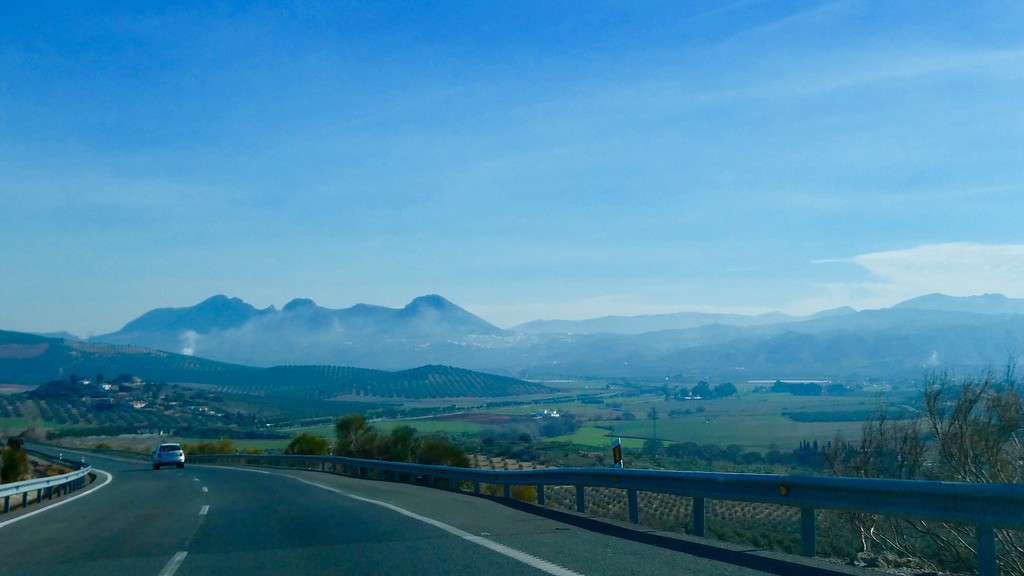 I had looked into Granada on Googlemaps, trying to determine the best garage to leave the car. The hotel was in the center of town but with all of the one way and limited access streets, I knew that it would be convoluted and I was right. The GPS did a fairly good job despite this and as we turned the corner to the garage entrance, Dan called out “I know that guy!” I was too busy driving to be able to look, but it turned out that he had seen our friend Ron walking down the sidewalk. It looked like we had some good timing!

The garage in Seville had been tight, but this one was even tighter! Fortunately Dan gave me some assistance and the car was tucked away for the next couple of days. Now it was time to haul our baggage to our hotel and find our friends.

The front of our hotel, Zaguán Del Darro

The interior of our hotel

There was a small bar on the ground floor of the hotel and that’s where we found Ron and Sue, as well as Sue’s sister and her husband. They had arrived fairly recently and since we couldn’t check in until after two o’clock, Dan and I sat down to join them.

Once we had checked in and sorted out our rooms, the six of us set out for an early exploration of the city. We meandered our way through some of the city’s streets, always heading “up” and ended up at one of the local landmarks, Mirador San Nicolás, a park near the Grand Mosque.

City wall up on the hill

The view of the Alhambra from Mirador San Nicolás

Ron and Dan on the cobblestone street 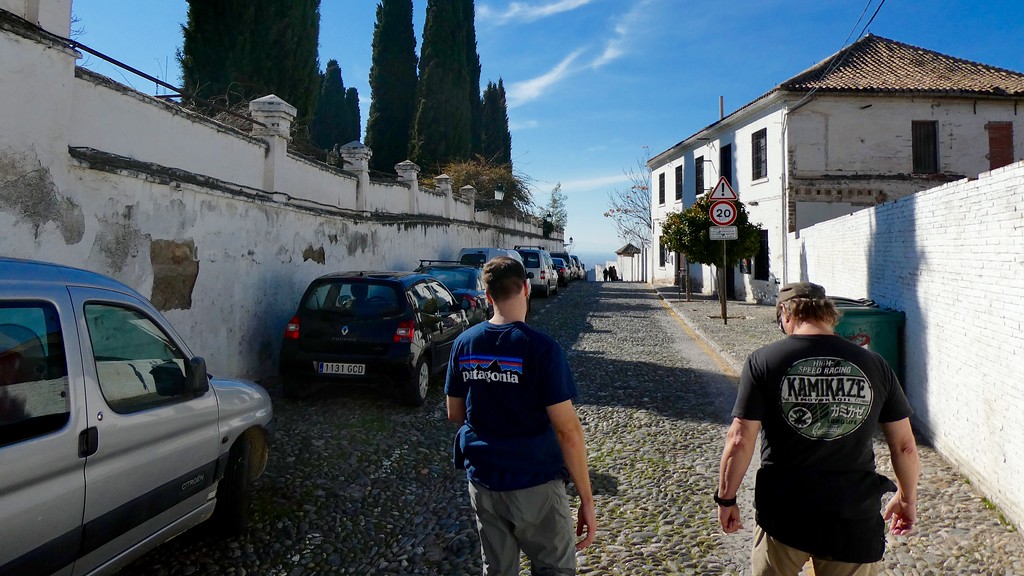 Still wandering around, we made our way downhill towards some of the city’s other well-known landmarks. Along the way we passed through some narrow alleys that were lined with colorful booths and fabrics.

Earlier, on our way to the parking garage, we were stuck at an awkward corner. A traffic light limited the traffic going to the left, whereas we were heading to the right. I didn’t pay much attention to the left-turning traffic, as I was busy navigating our “free upgrade!” car past a parked scooter near the curb and trying to ignore the honking car somewhere behind me. Only later that day, when we found ourselves walking past that same corner did I see what the commotion was about: a retractable bollard was set to block the left turn lane when the light was red. This became very evident when we saw that some poor sap had misjudged things and hit it with his car. Whoops.

Antifreeze all over the place!

On the tourist maps of the city there was a lot of support for the LGBT community. For some reason, this came as a surprise to me but it was great to see. I also saw a few businesses that openly posted their support. It is always nice to see when businesses come out for the community (yes, that pun was intended.)

It was tapas time! We found La Riviera, reputed to be a well-regarded place to eat and drink. Sadly, we were all fairly disappointed with the food, and the extensive beer selection was apparently (according to my beer- loving friends) not all that special. Our waiter was curt and hard to get a hold of once we had decided to order some additional items. I would have to say that it was most disappointing eating experience I had in Spain. 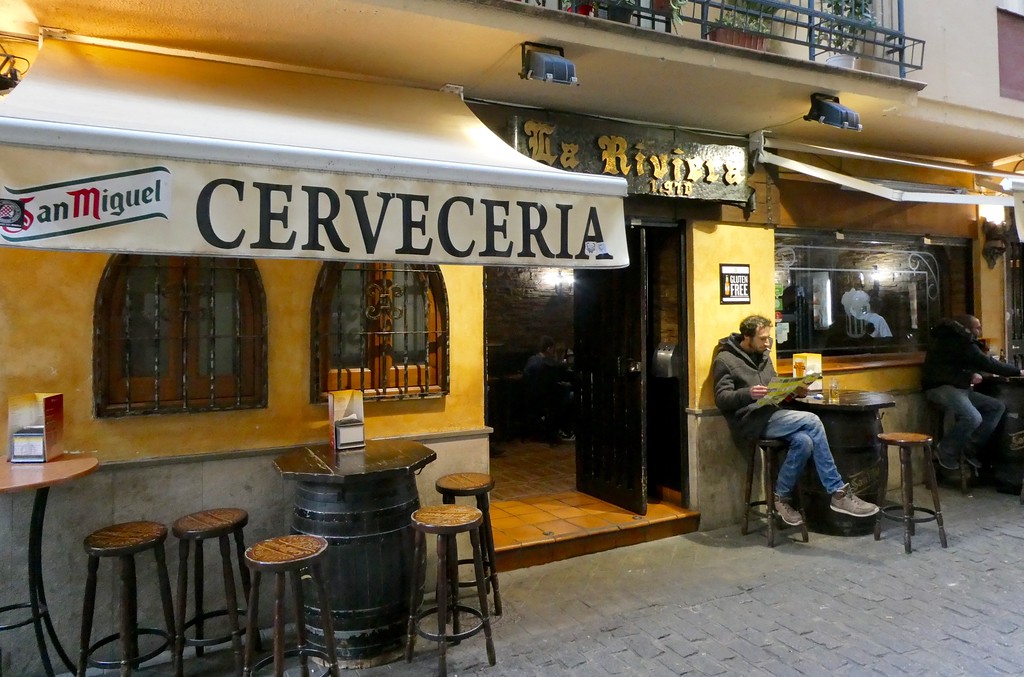 Walking back to the hotel

We retired back to our hotel for a bit of a break before heading out for yet more eating. This time when we went out, Dan took us on a “scenic walk” to our restaurant, not realizing that climbing up and down the hill across the river was not required to get there.

Taking the long way to dinner 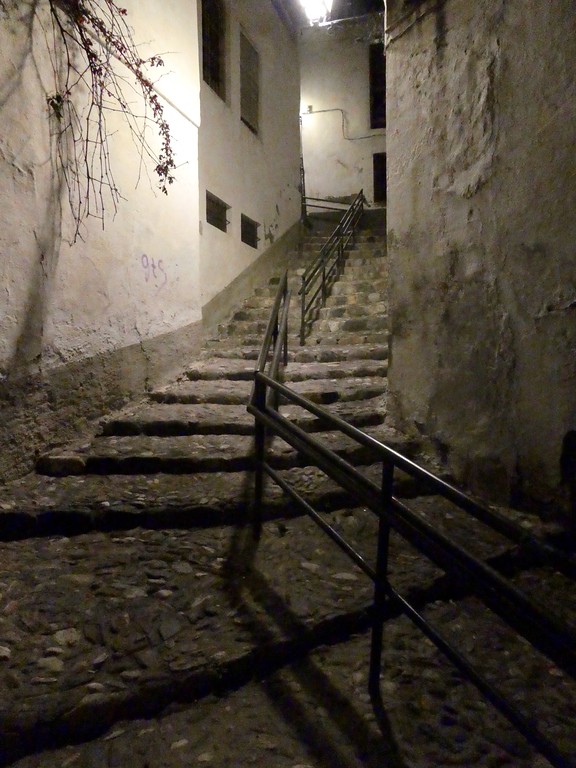 We found some very narrow pathways

Dinner was at Picoteca 3 Mananas and it was fantastic. Everyone enjoyed their meals and the service was fantastic. It more than made up for our late afternoon tapas stop. As we had head out late, we also got back to the hotel late. We had fallen into the Spanish trap of eating dinner at 10 pm.