Aosta was another Roman stronghold, and this time the evidence was much more obvious than in the other cities we had visited. According to wiki, they “founded the Roman colony of Augusta Praetoria Salassorum, housing 3,000 retired veterans.” The Romans had chosen a lovely setting for their retirement home. Here is a link to more information on the history of the region. There is so much evidence that the Romans left behind – and the following societies allowed to remain – that it makes walking around the a great pleasure.

One of the key reasons of choosing Mu was its location in the heart of the historic district. In fact, as we were searching around for the building itself, I inadvertently rode my motorcycle over this 2,000 year old Roman bridge. 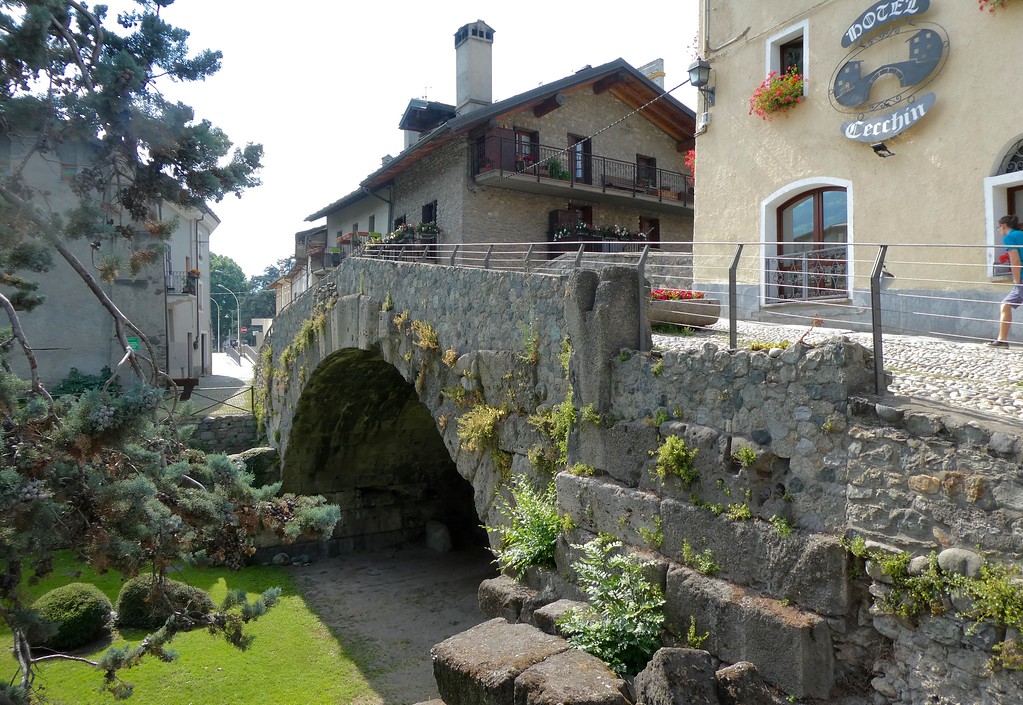 Our BnB (and one motorcycle) is barely visible on the right 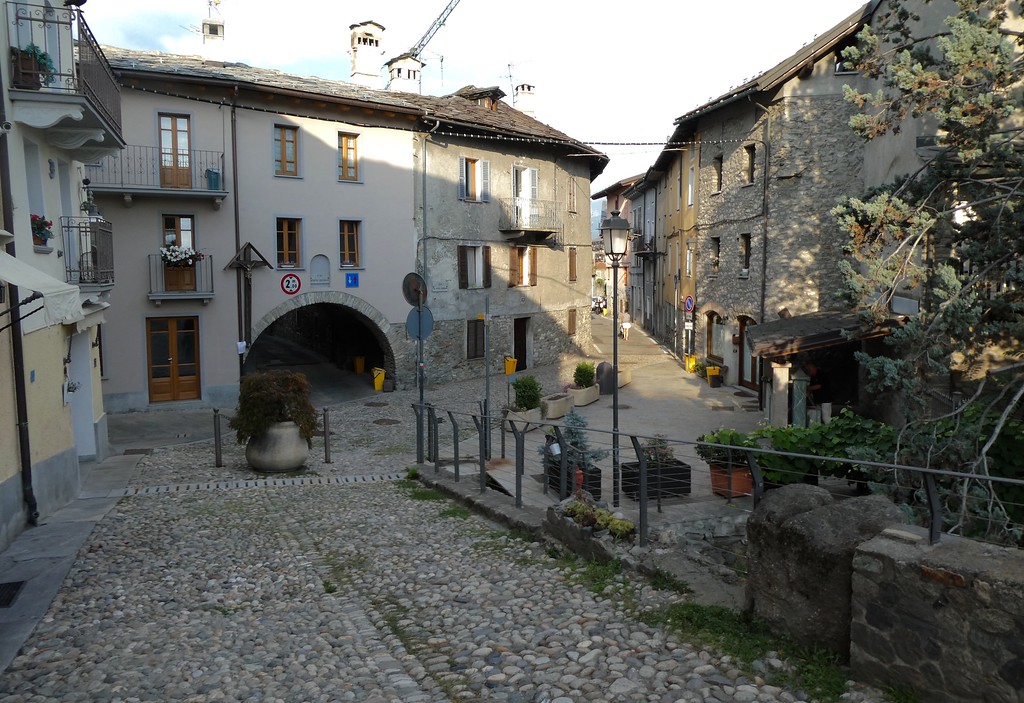 Washing board integrated into the fountain 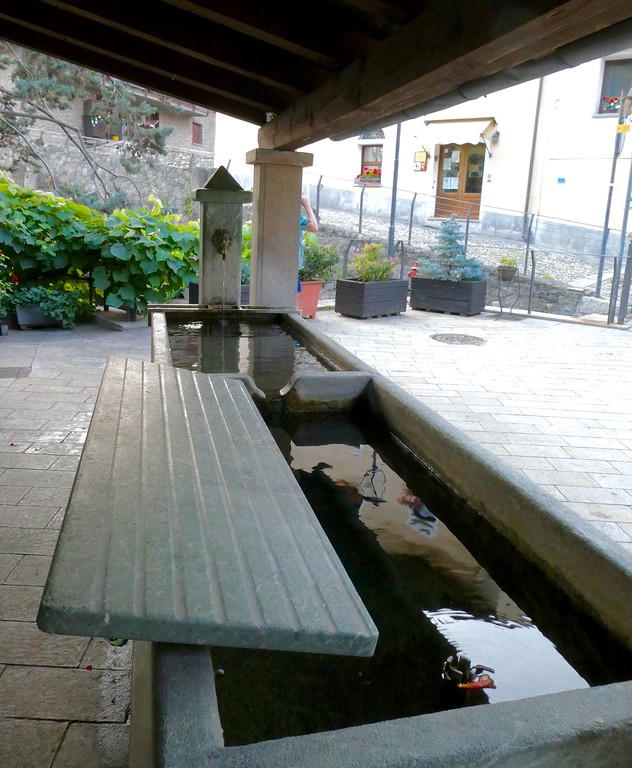 Pont de Pierre, with the Arch of Augustus visible in the background 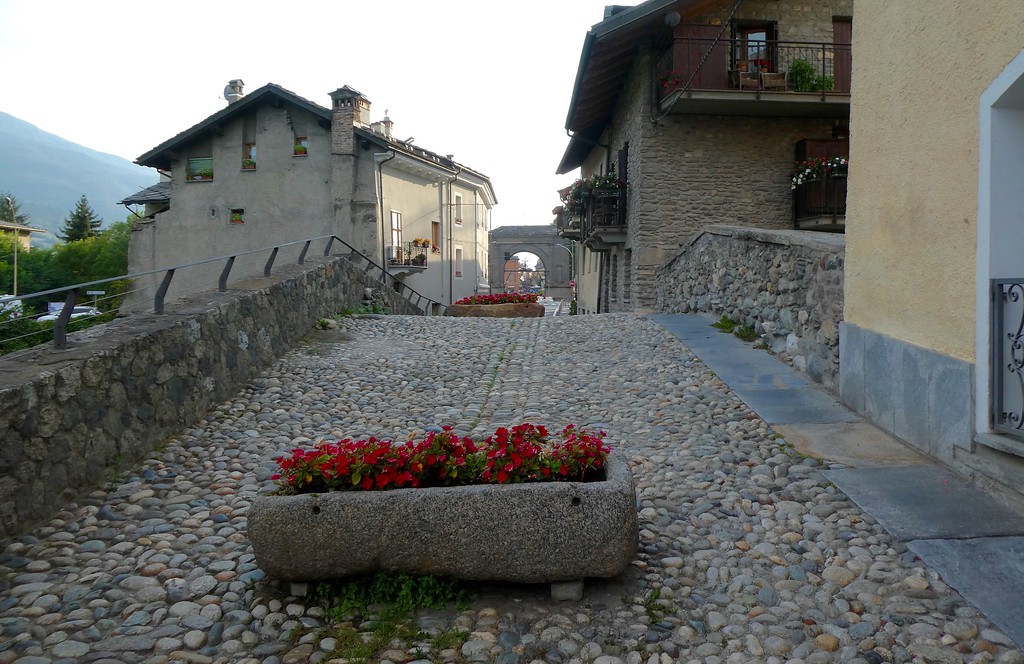 The above photo illustrates just how close we were to the city center. We had emptied our bikes, changed our clothes and headed out into the heat to make our own discoveries. 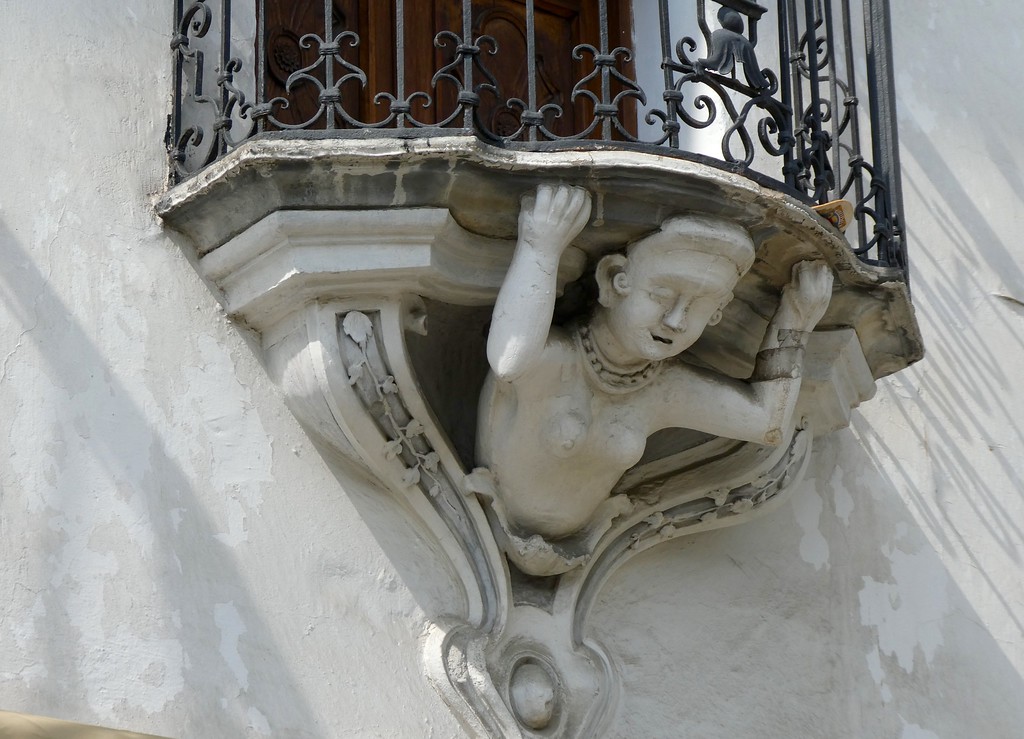 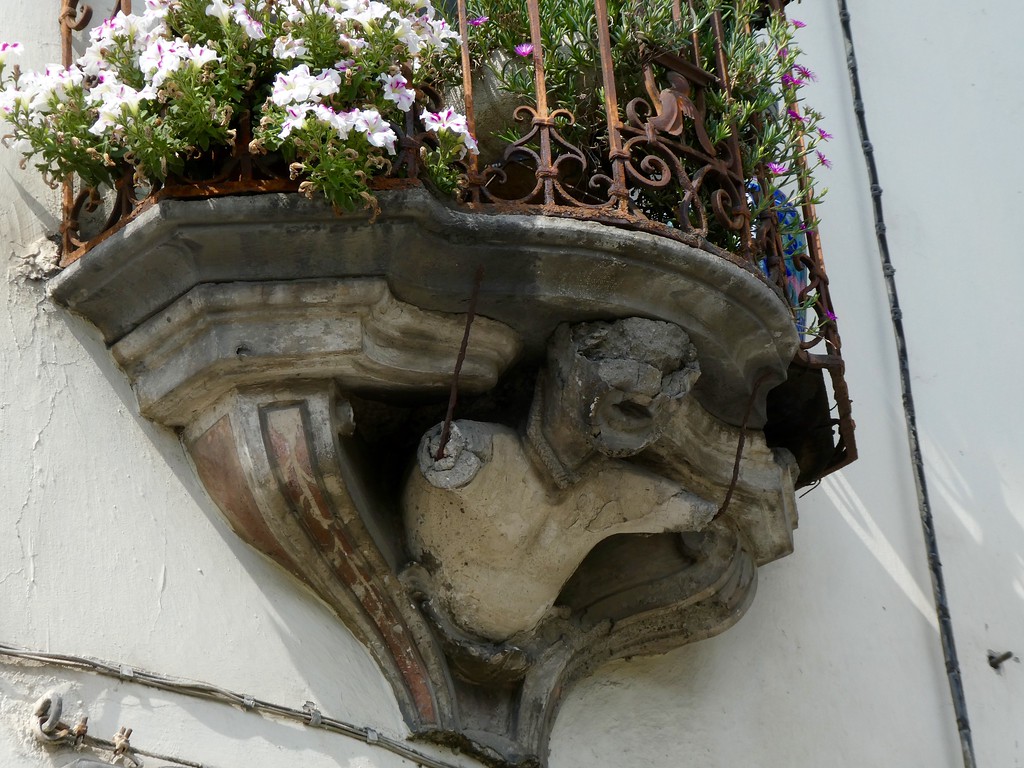 2,000 years old – I will never not be amazed at how well some things have survived the ages

The main streets of historic Aosta were wonderfully paved with smooth stone and stores lined the streets. There were lively clusters of people enjoying the warm weather, sitting in the park or licking ice cream cones.

The old and the new 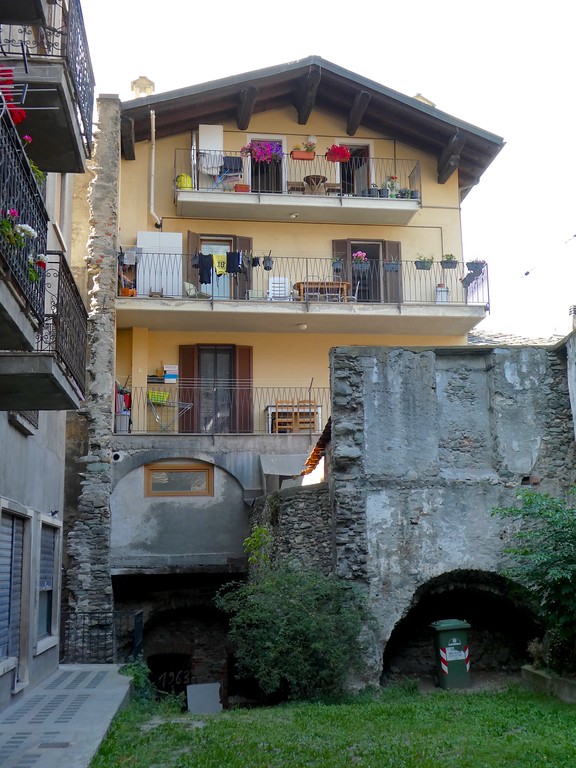 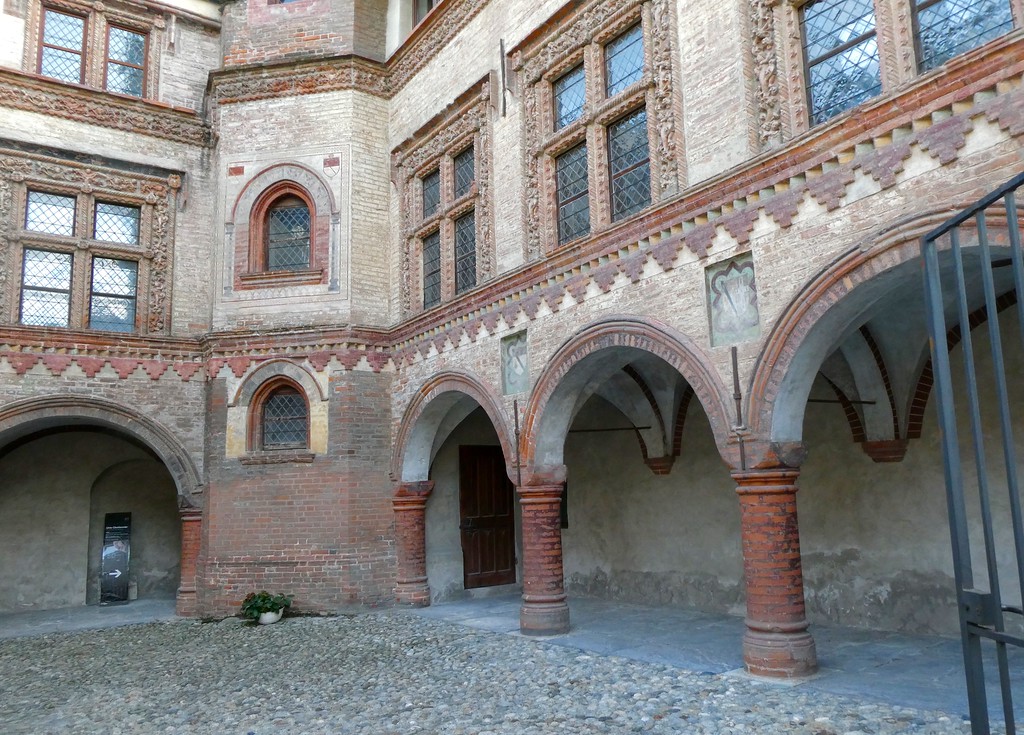 We returned to our room and we took advantage of the second key reason I choose Mu BnB: the sauna. I know! It sounds ridiculous to complain about the heat and humidity throughout the trip, but then purposefully put myself into a box that was designed purely for heat and humidity. But there is something cleansing about a sauna and we both felt greatly refreshed afterwards.

The owner of the BnB was fantastic. He had greeted us very warmly, gave us some advice on how to best visit the city and then arranged for the sauna to be ready for us that evening. The building was in fantastic repair – it was very obvious that he had put a lot of effort and attention to detail throughout. The sauna was in the basement and he managed to tuck it in nicely under the ancient stone walls. 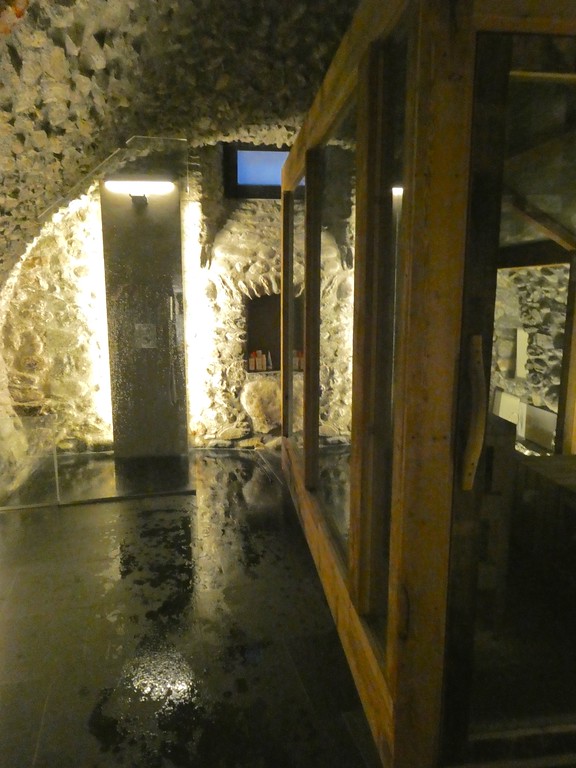 Refreshed, we dressed once again and went out for some dinner. When in Italy it is hard to resist a good pizza, and the take away restaurant Il Capriccio was the perfect answer. The sun was getting lower on the horizon, so we popped into a grocery store to pick up a couple of snacks for the room and retired for the evening. Tomorrow we’d be home!

A couple of years ago we had ridden through Aosta on our way home from Tuscany. We hadn’t stopped anywhere in the long Aosta valley, but what we could see from the motorway made it clear that this area had deserved more time. And still deserves more time. But today we were leaving for home. We could come back another time.

The weather was perfect, in my opinion: it was cool and overcast, even with a small chance of rain. I enjoyed our departure from Aosta as we quickly climbed up into the mountains and almost immediately came to Great St Bernard Pass. 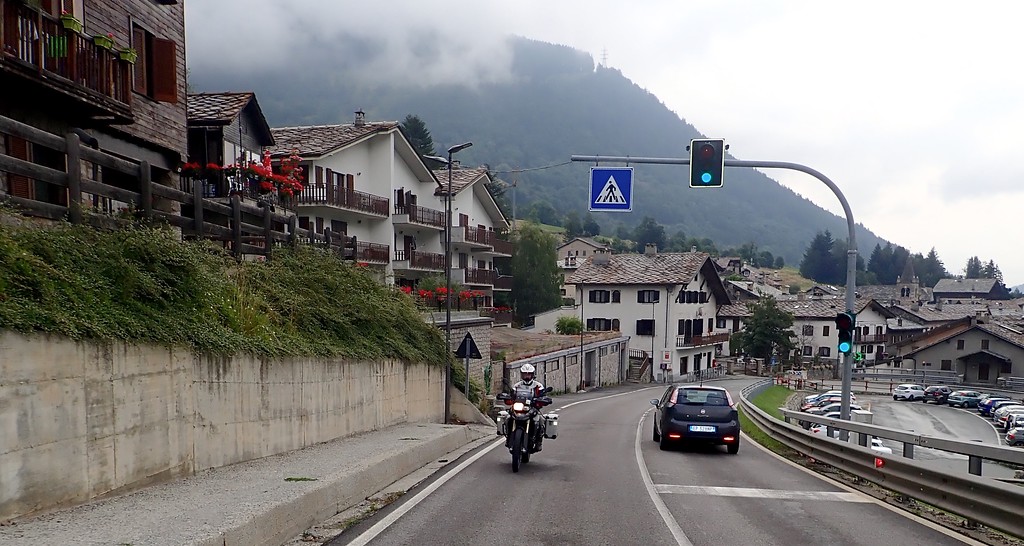 When we came through this was last time, it was too early in the season and the pass itself was closed. We took the tunnel instead, which was interesting once, but this time I was all too happy to be riding over instead of through the mountain. 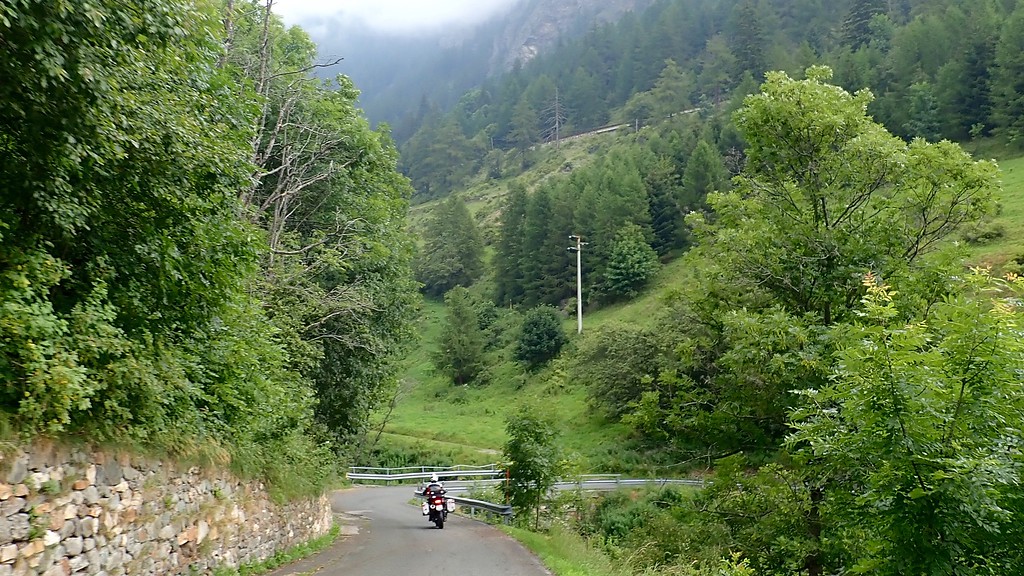 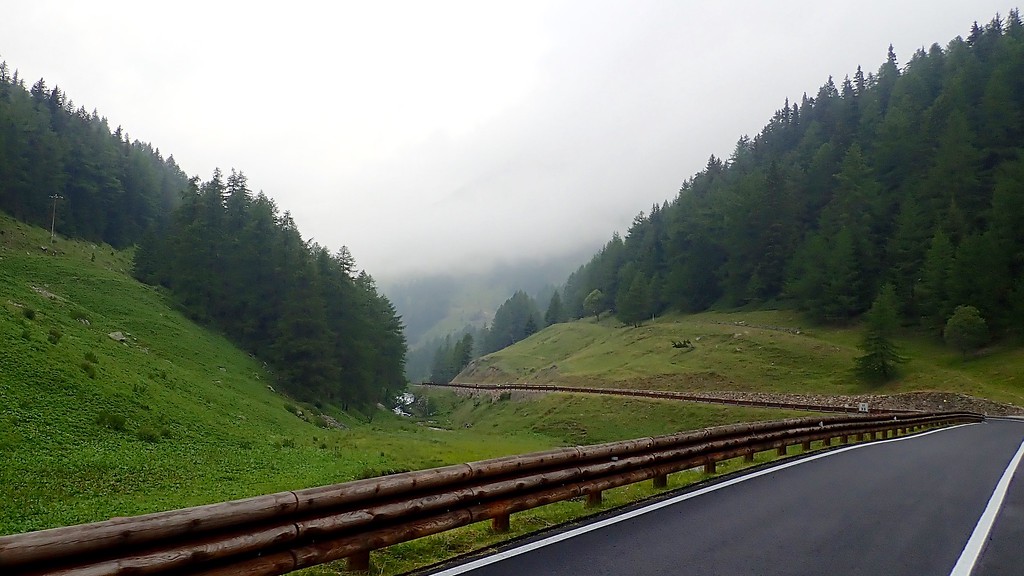 Not too much traffic this early in the morning! 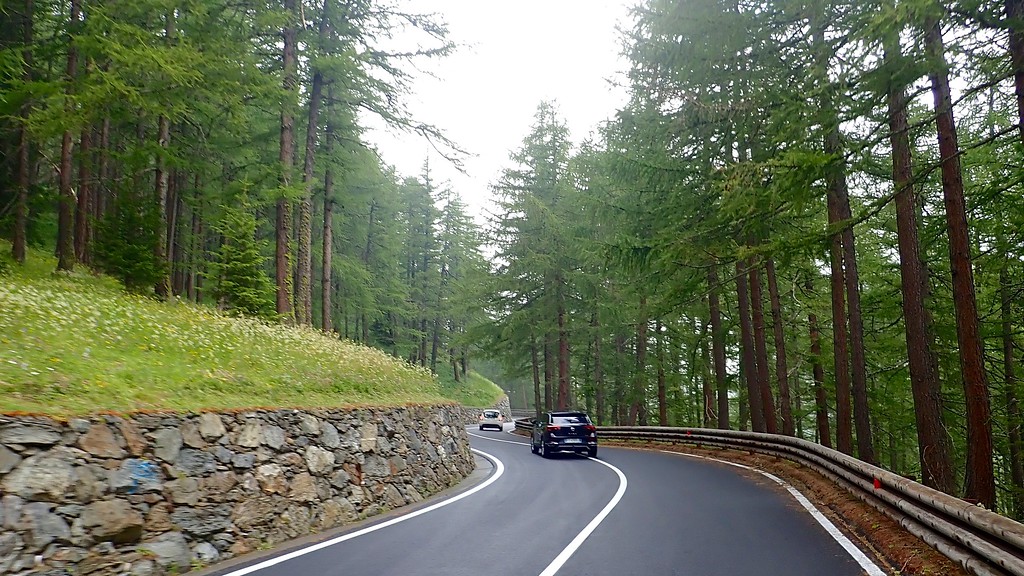 View of the gallery and tunnel infrastructure 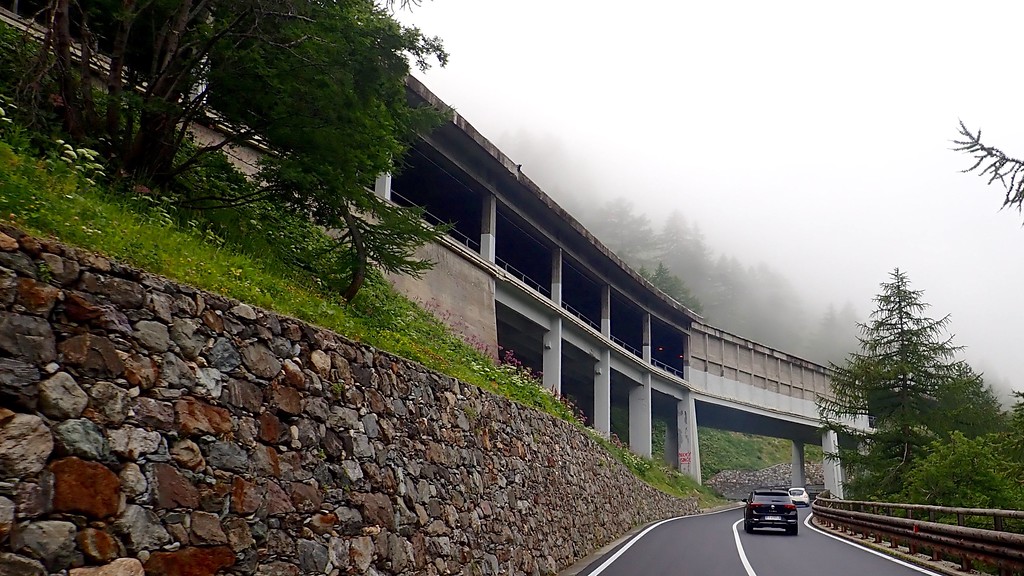 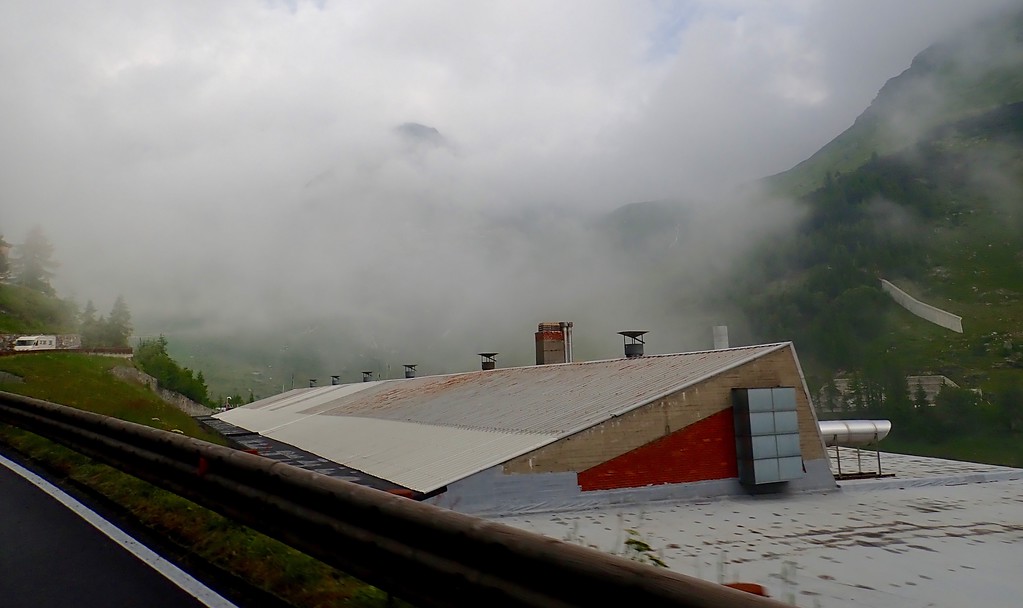 Not great views, but enjoyable nonetheless 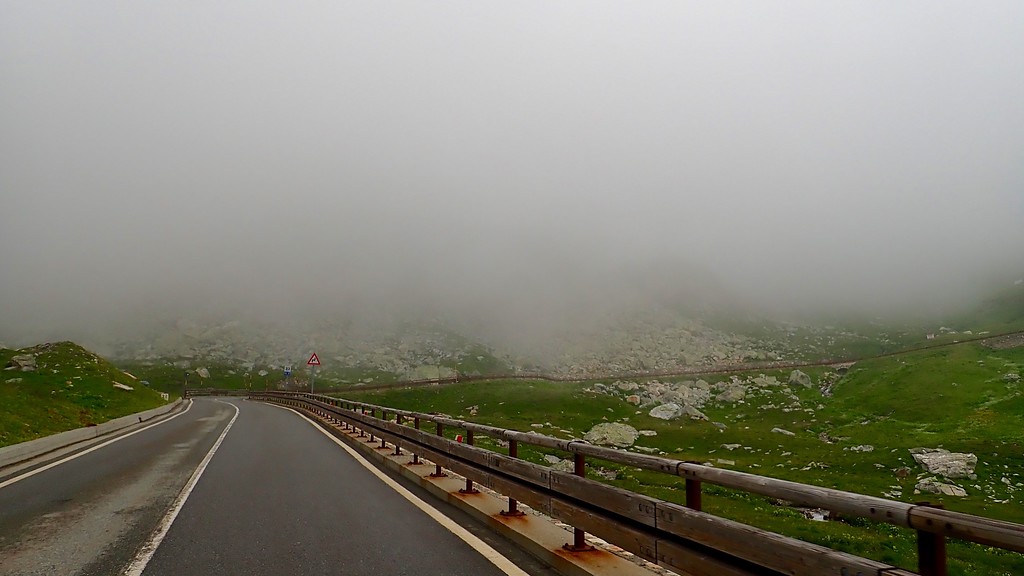 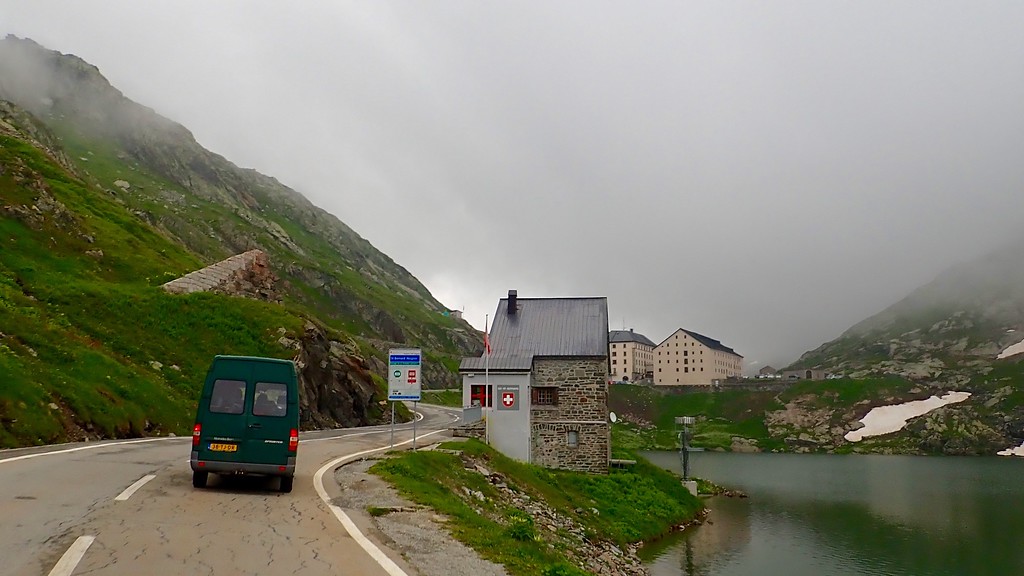 We stopped at the top of the pass and I was surprised just how little infrastructure there was. On the more popular Swiss passes (Grimsel, Furka, Gotthard) there are always busy restaurants and large parking areas for the best views. Here there were just a couple of buildings and a small flat area for a few cars and bikes. There was a souvenir shop and I picked up a small sticker for the motorcycle’s top case. I don’t do that often, but this one seemed special to me.

The road down the Swiss side of the pass was fantastic. We dropped out of the clouds, there was almost zero traffic and the lush meadows were a welcome sight.

Still riding above the tunnel 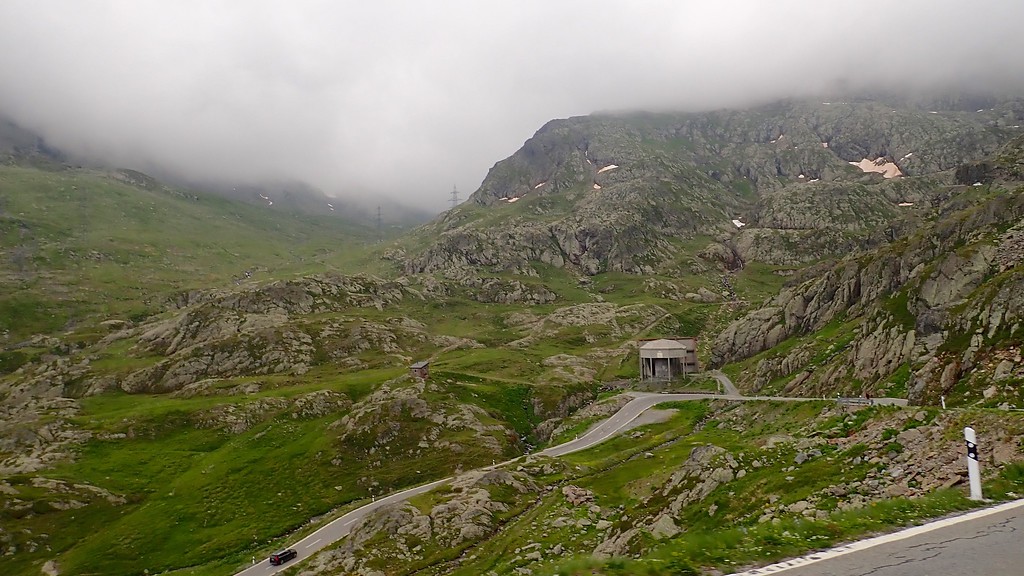 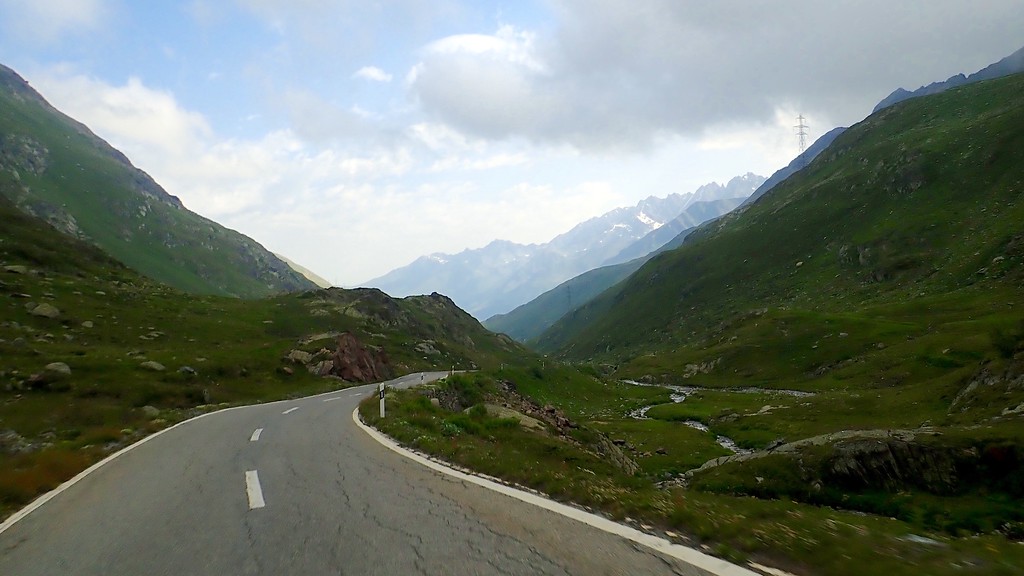 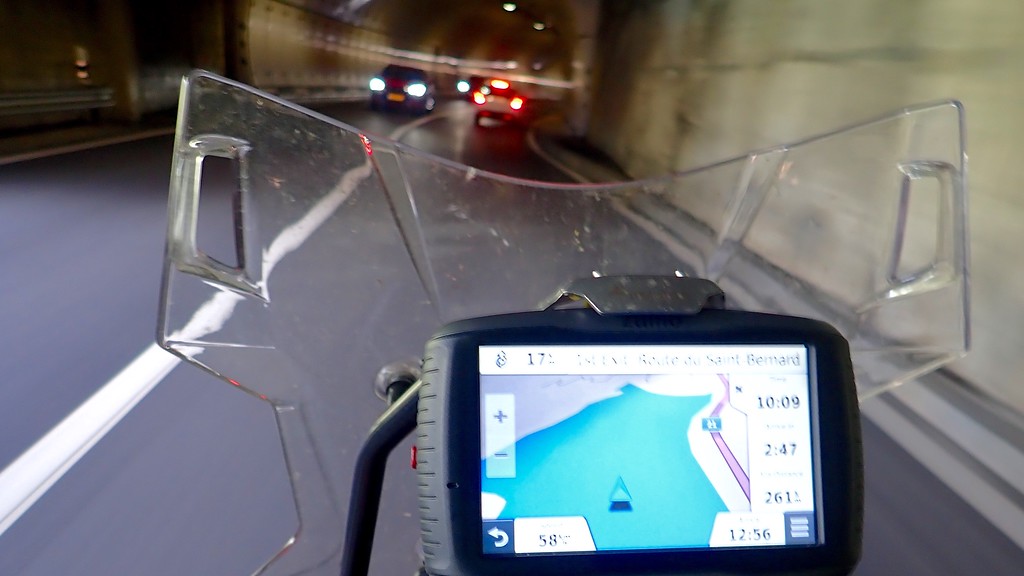 We joined up with the tunnel traffic and finished the descent to Martigny. From here on out there wouldn’t be much of interest. We would stick to the motorway for the couple of hours it would take to reach to Basel. 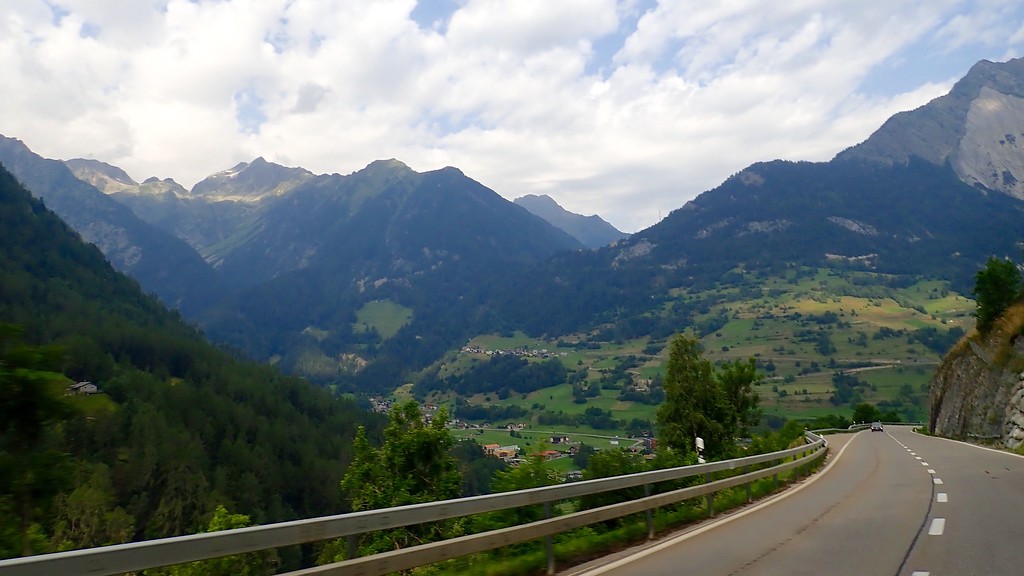 Chillon Castle on the shore of Lac Geneva

As we reached Montreux we hit traffic. There was an accident ahead and it was painfully slow going. I was again thankful for the overcast skies, as sitting in that much traffic under a full sun would have been intolerable. The heat was bad enough as it was! And of course, you can’t have a back up like ours without the corresponding back up in the other direction. 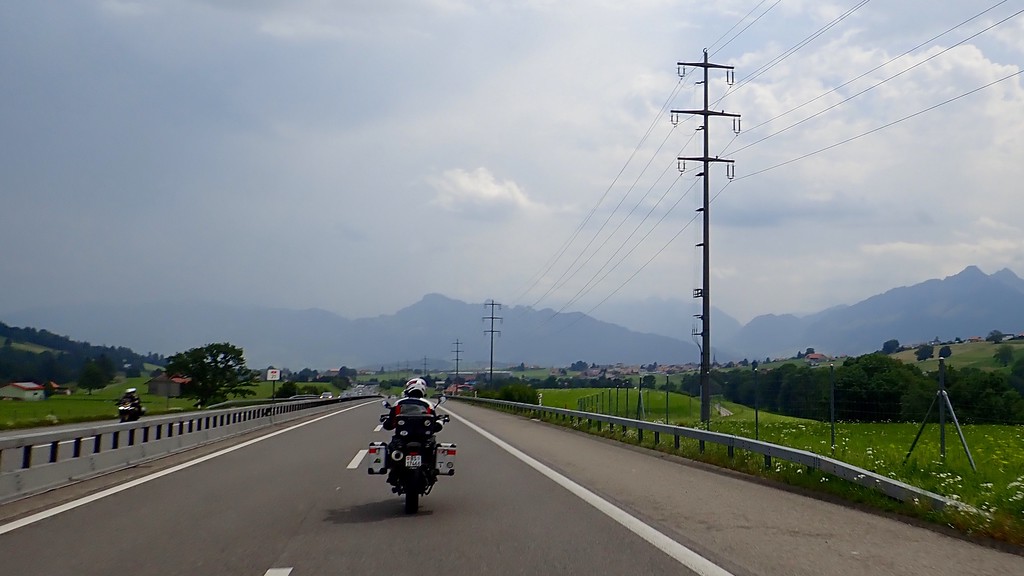 We reached Basel in the early afternoon, happy to put the bikes in the garage and give the kitties some well-deserved attention. Our cat sitters had to leave before we could get home and we found the apartment in great shape, almost cleaner than how we left it, I dare say! The cats were happy to have us home and we were happy to be home.