We were up early and ready to hit the road. In researching our next stop and the route to get there I mentioned to Dan what looked like the “easiest” route, which meant heading over the mountains into Italy and then skirting around Turin. I showed him the map and he pointed to the squiggly mountain roads: “Why don’t we go this way?” Was this really Dan talking? The guy who usually shied away from mountain switchbacks? Far be it for me to deny him what he wants! I planned accordingly.

Immediately outside of Briançon were a series of switchbacks that make make sure we were awake. Or wake us up if we weren’t already.

The fort of Briançon (and the switchbacks) behind us

We kept east through the mountains, passing through tunnels and towns as they came. The morning was bright and cool. I had debated on what to wear, as I assumed that it would just get colder as we gained altitude. But I’d much prefer the cold over the heat and was enjoying fresh air. 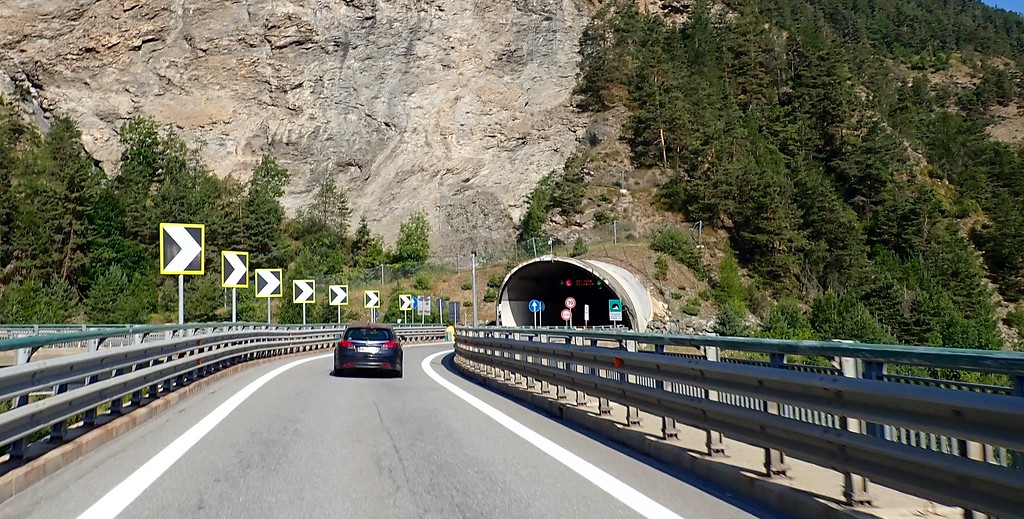 Someone has good taste in cars in Oulx, Italy – quite a few heads turned as it rolled by

Approaching the town of Susa

At Susa we veered north and enjoyed a quick ascent through the forest. It was a comfortable road and the view across the valley was hazy, but pleasant.

“The type of building shown above is called “casa cantoniera” and were supplied by the Italian government for the people that lived there and worked for ANAS (the road maintenance department). They were also warehouses for keeping tools, machines (snowplows etc.) and supplies such as salt for the winter. In the 70/80s the houses were abandoned because the road maintenance was outsourced and many road were given to local councils. The buildings that were in remote areas were just a cost so they were abandoned.”

The road to Mount Cenis, the border between Italy and France

Welcome (back) to France!

We had seen a surprising number of bicycles on this road and now we knew why: There was a race! It was apparently the Mont-Cenis Mountain Bike Ride, but now I can’t seem to find anything about it on the internet. Regardless, it was interesting to see the variety of bicycles on the road: mountain bikes, e-bikes, road bikes – and all ages were peddling them.

Lots of colorful wildflowers as well 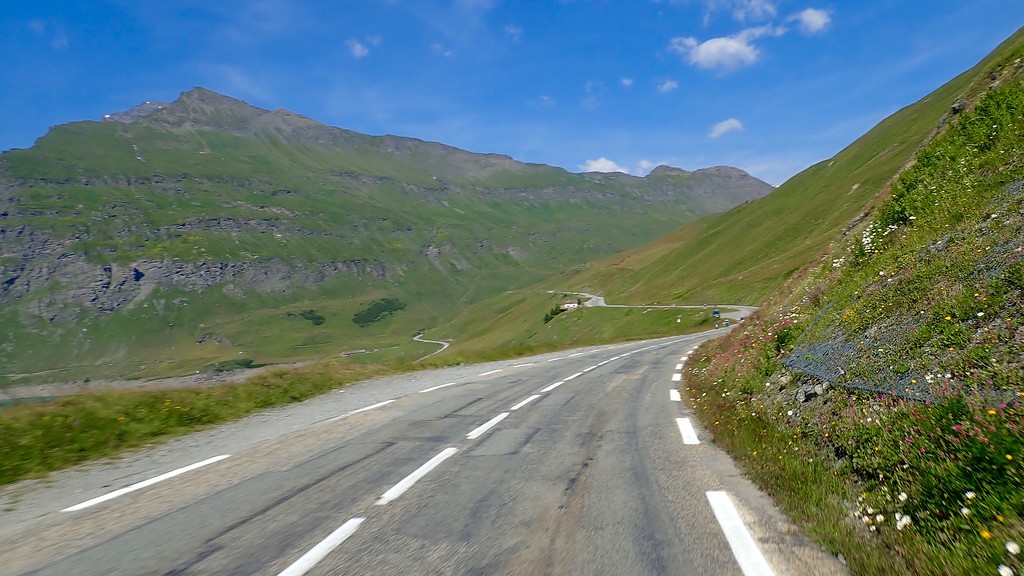 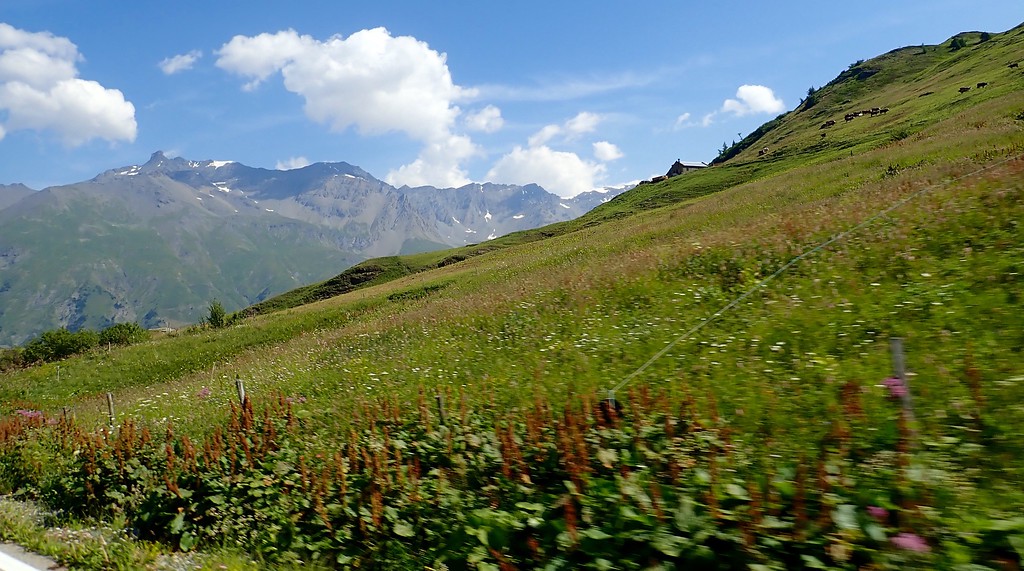 After we had passed the lake, the road descended into a wide valley. Bicycles continued to pass by, and ski lifts came into view.

The town of Bessans in the distance

Making hay while the sun shines 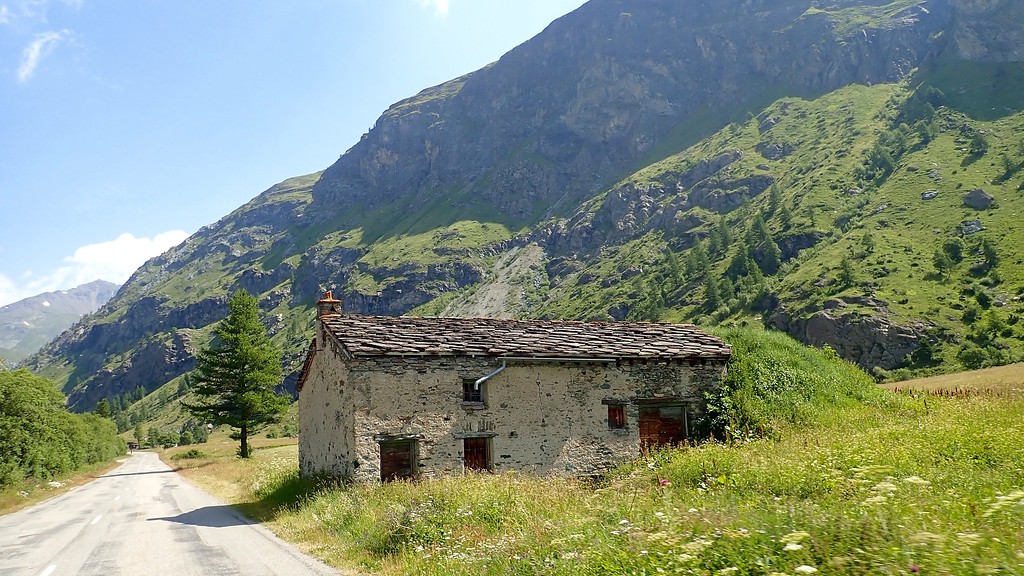 We had stumbled upon another fine mountain pass, the Col de l’Iseran. We climbed the steep side rapidly 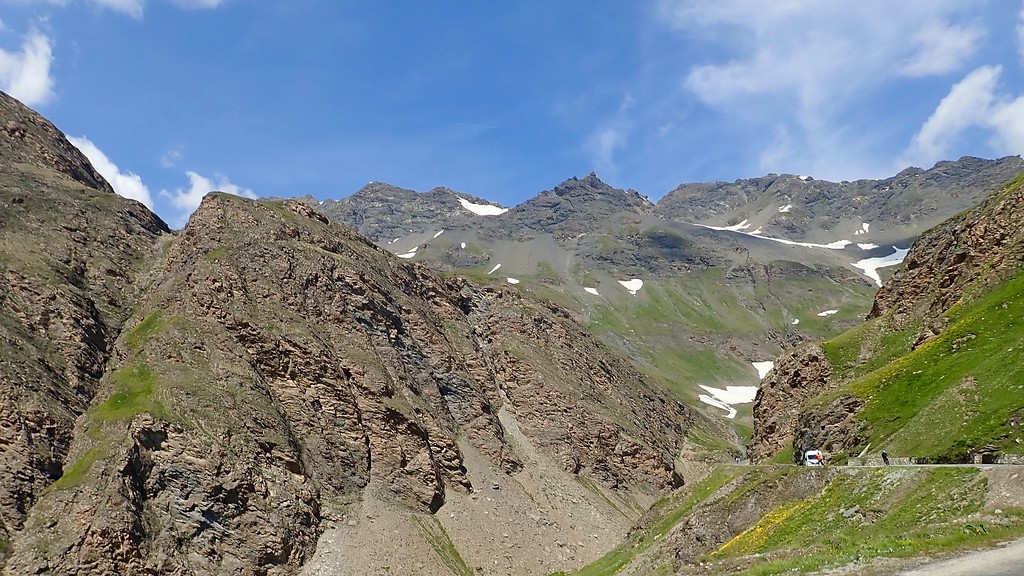 I’m not a fan of switchbacks, but the roads today were incredible. I enjoyed the open views, the open roads and the gentle sweeping curves. This made for a good day – one of the best days.

We found another enterprising photographer! 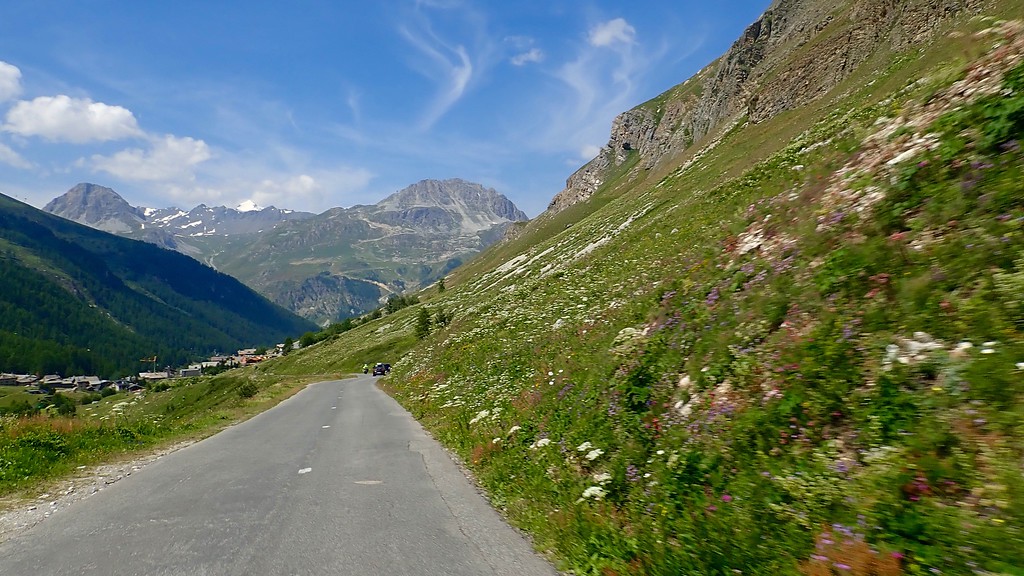 And a very popular ski destination as well

The village of Val-d’Isère was small but obviously it wouldn’t be so for long. There was an incredible amount of new construction at the north end of the region, called La Daille. Some of the new construction looked nice, and some of it looked…overwhelming.

We slipped between the narrow gorge, rode by Lac du Chevril and followed the narrow valley. It was hot and we didn’t want to stop. The breeze blowing through my jacket and helmet was the only thing that was keeping me comfortable.

The day had one more surprise for us: Col du Petite St Bernard

And then it was all downhill from here.

We were out of the mountains – well, sort of – and on our way to our night’s destination: Aosta 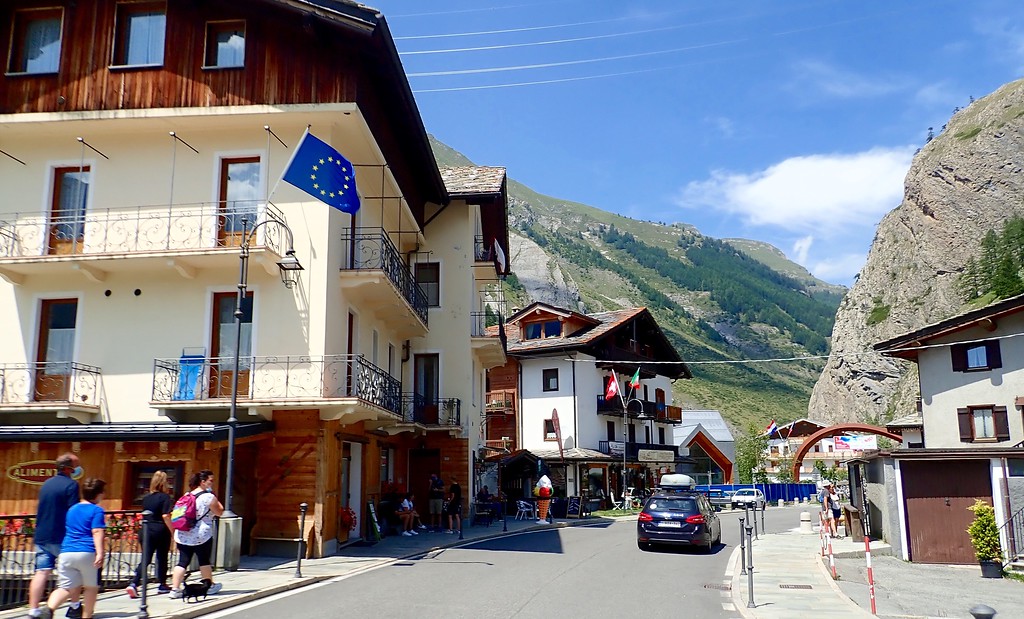 Lots of historic buildings were seen along this route

The toll booths of the motorway – and a castle!

It was a pleasant ride into Aosta, but it was hot. And there was considerable traffic. It was a Friday afternoon in the high summer: many people were out and about and it was a slow trek across the city to the far end, where our BnB was located. It was bearable mostly because we knew that we were almost there and would be out of our gear in just a short time.

This time was frustratingly extended, as the GPS had led us to the wrong location. We were so close, but as there was no proper signage, it took us much too long to find the door.

Our home for the evening, the, “Mu BnB”

As entry is already too long and with many, many photos, I’ll leave our evening in Aosta to tomorrow’s page. Enjoy!