Le Galinier de Lourmarin touts itself as a high end BnB and we could see that a lot of money had recently been put into the property. Here’s a quick tour of where we would call “home” for the next couple of days.

The entrance (but still well behind that locked gate) 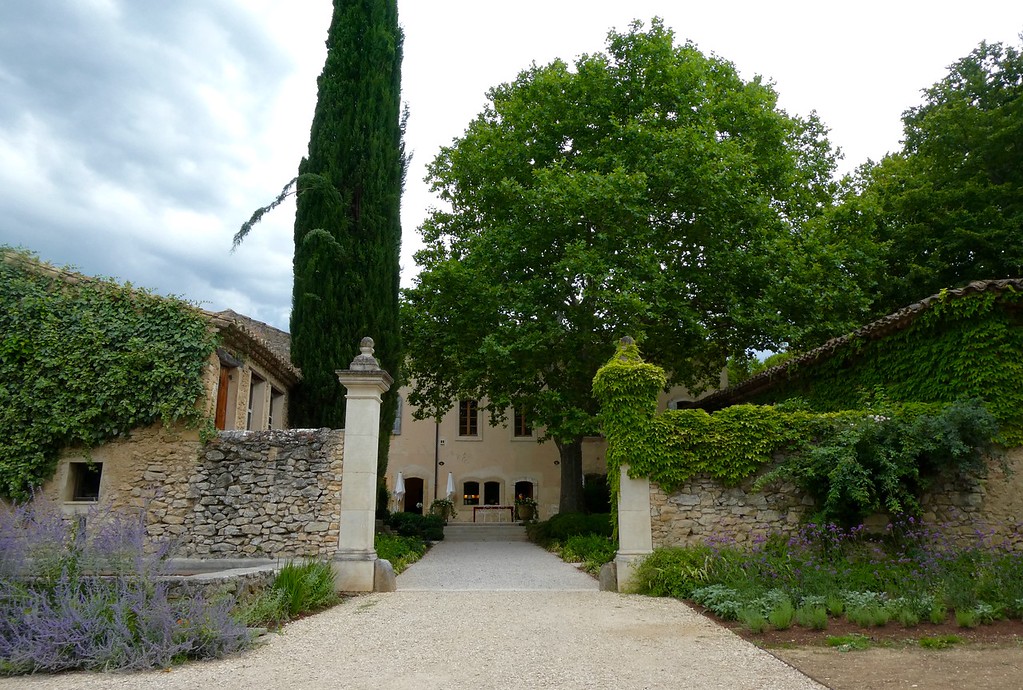 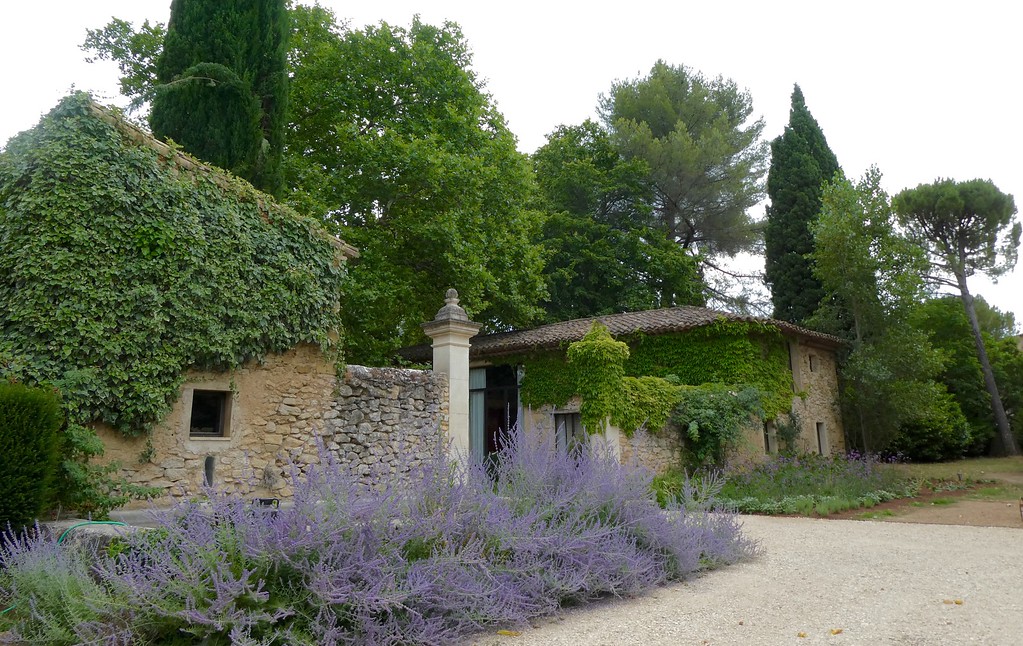 The awesome looking kitchen (not to be used by guests) 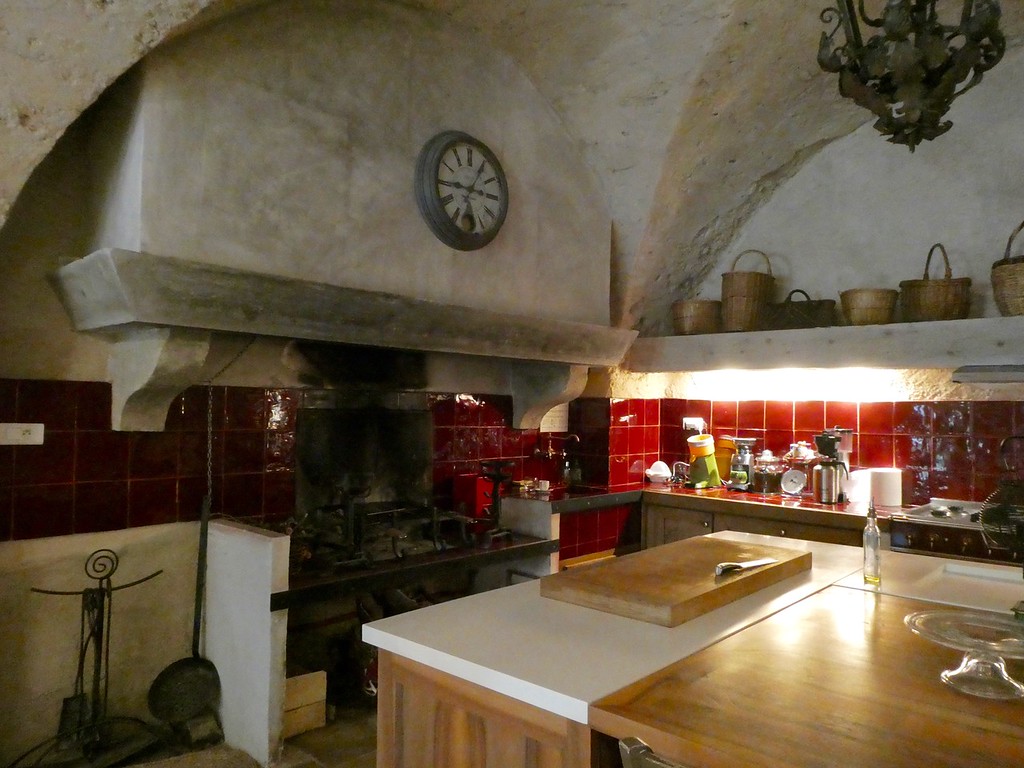 After we arrived last night we attempted to clean ourselves up before a quick visit to the village and find a proper dinner. Our room was charming and clean, and on one wall was the sink, toilet and a clawfoot tub. While the clawfoot bathtub looked really amazing, the fact that there was no way to shower was frustrating. But we managed to rinse off and put on some comfy walking clothes on for our first foray into Lourmarin.

No shower for you! 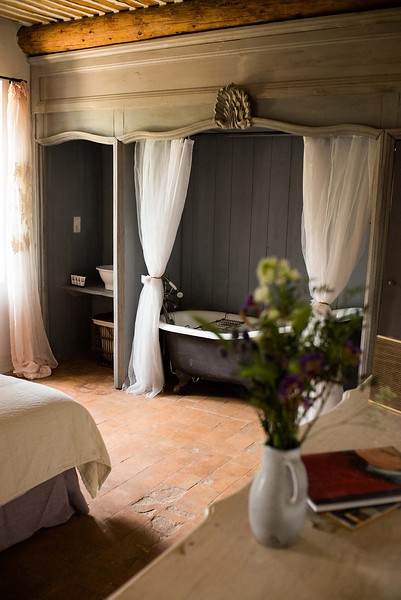 All of the fountains in Lourmarin were like this

There were a lot of cats in Lourmarin 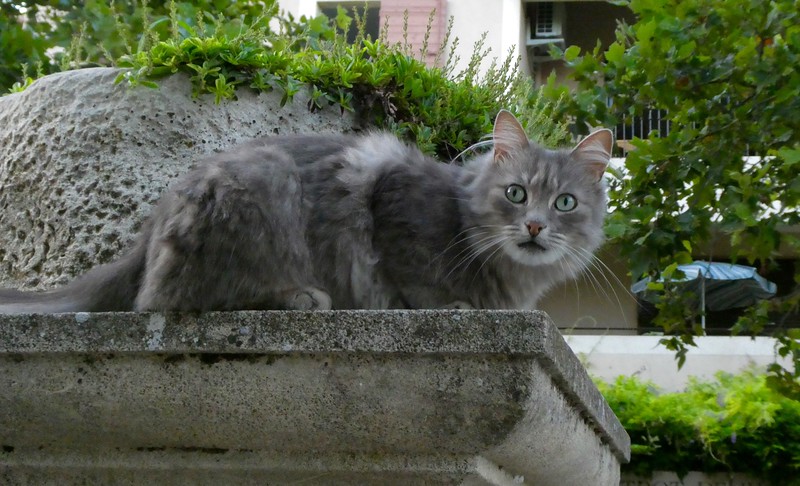 We eventually settled at Cafe Gaby for dinner. The restaurant had spread out from their own sidewalk to the sidewalk across the street and even around the corner. The waitstaff were amazing: they ran from table to table, always carrying a loaded tray and alert to what the patrons needed. The food we ordered was tasty and it was an enjoyable evening watching the crowds.

That evening as we lay in our comfortable bed we could hear someone talking. And not just hear them talking but understand every (American) word. It was the same guy who was in the lobby when we checked in, on the couch “talking business” on his cell phone. And now here he was in his own room, still “talking business” at midnight. We could hear him clearly through the wardrobe that constituted the wall between our rooms. I think that the idea of hearing him was more annoying than actually hearing him – it took me a while before I could fall asleep.

The next morning we started the day by riding the bikes to the nearest market (Super U!) in Puyvert. After yesterday’s arrival and heat, and the forecasted heat for our stay, we realized that day trips would not happen. The daily temperatures would be too hot, and we were getting closer to busier roads and more frequent towns.

Disinfectant gates at the Super U!

We returned to our room to drop off our goodies only to find that the request to “not make up the room” had been ignored. I suppose it was better that they erred on the side of caution, but still…it was now time for ice cream! We were going to get a cone last night after dinner, but dinner was just too filling. Instead, today we’d have a pre-lunch dessert.

While we licked our cones we headed “out of town”. Dan had found that the grave of Albert Camus was just down the road. While it may have been too warm to put on full gear and ride around, it wasn’t bad enough to keep us from exploring at least some of the area around us!

The grave of Albert Camus itself was not interesting at all. Fans had left a couple of appropriate tokens of appreciation (cigarettes, pen & paper, notes) but otherwise it was not much different than any other grave in the cemetery. But some of the other graves were quite interesting: the local practice was to add decorative momentos on top of the family stone, each one commemorating the loved one who was entombed within. It was actually a pretty nice idea 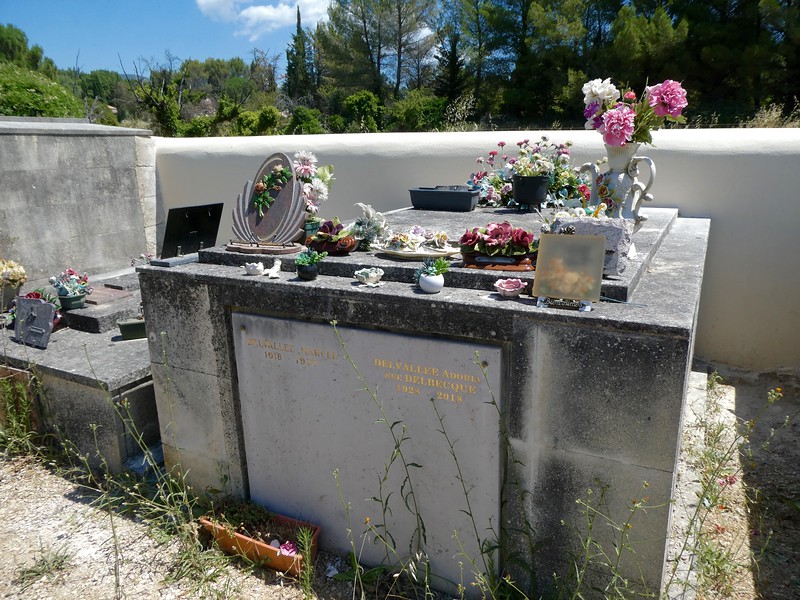 From the cemetery we continued down the road and looped back towards the village, passing by the Château de Lourmarin along the way. It was a fairly small castle, as far as castles go, but it was in excellent repair and appears to be well maintained inside as well. In fact, it is regularly used to host artists in residence during the summer, concerts, conferences, and exhibitions throughout the year. Nice to see it being used so often and for interesting events. 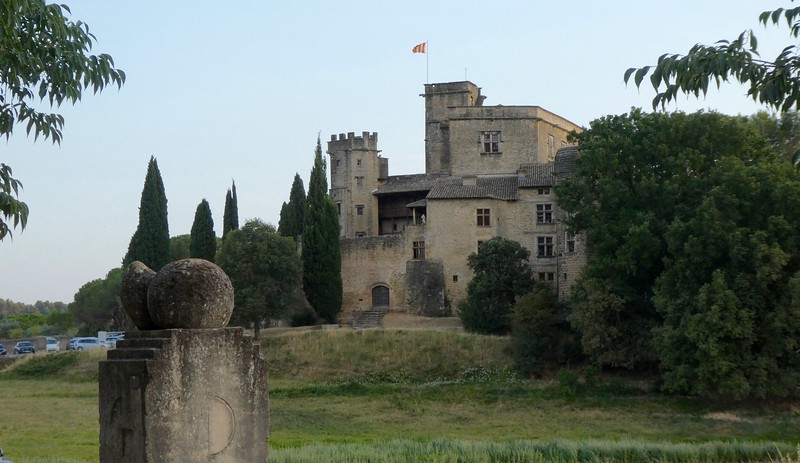 We returned to our room, changed into our bathing suits and took a long dip in the pool. I will say that the water temperature was perfect: just cool enough to give you a little “gasp!” as you jumped in, but then immediately comfortable and refreshing. We brought out our lunch goodies and had a little picnic in the shade. No one else was around at this time of day, presumably having gone off on day trips of their own.

We ended up going back into the village to wander around some more, checking out little tiny lanes that we had missed the first night. 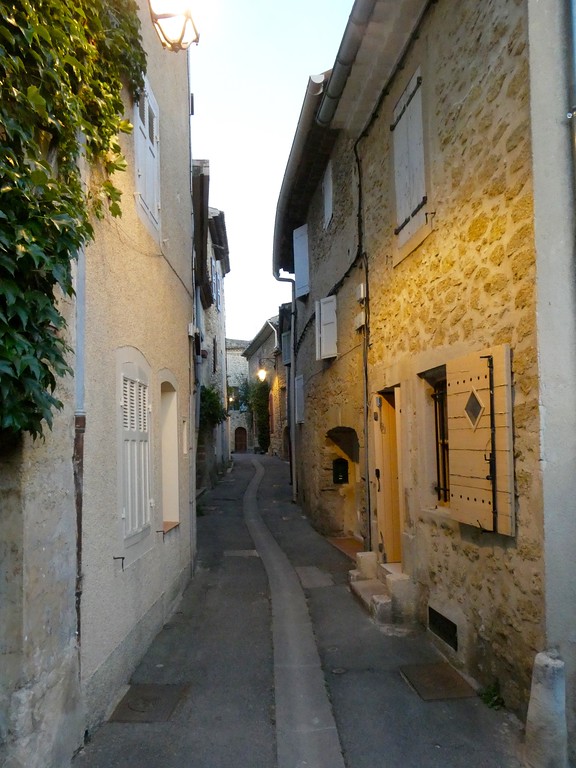 More than one garbage bag was hung like this, presumably to keep out pests 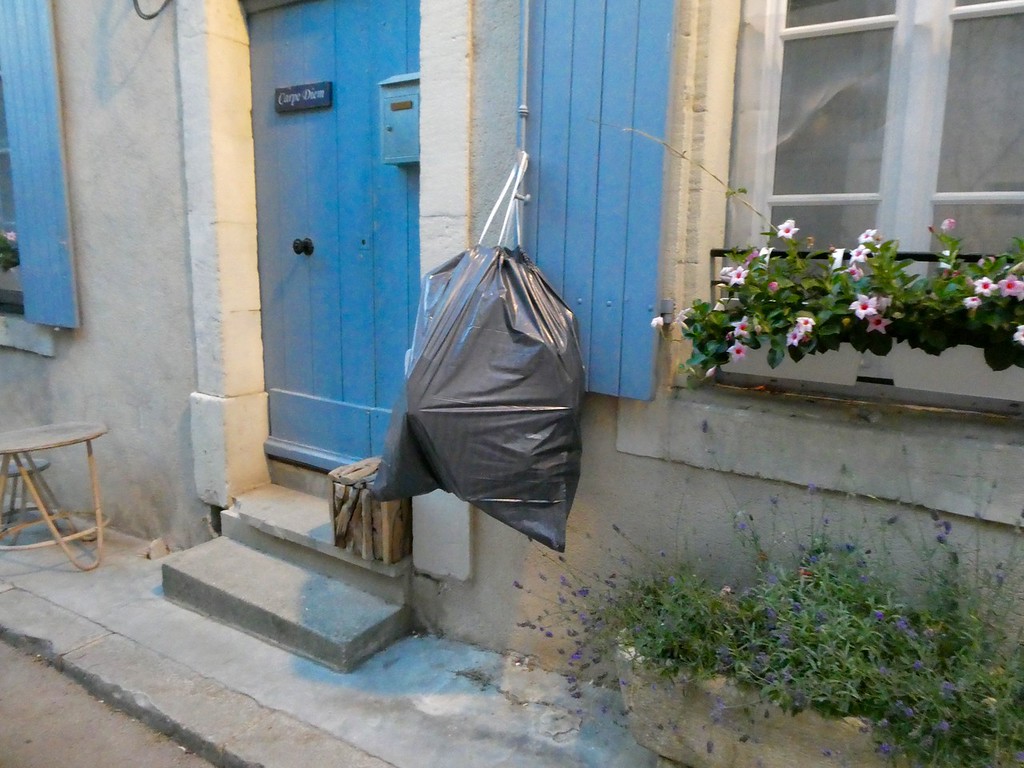 It was a relaxing evening – and much quieter as I think that our business neighbor took his business elsewhere that night. It was much too warm to sleep comfortably, however.