The goal for this trip was to “stop and smell the flowers” instead of the usual “how far can we get with our time off?” We took this to heart and planned to stay in Saint-Ferréol for two nights, thereby giving us a full day to explore the region. Since we had previously visited Annecy we set our sights (ok, I set my sights) on nearby Aix-les-Bains & Chambéry.

Looking at GoogleMaps I was pleased to see that there was a nice loop route that we could take that would give us a view of Lake Annecy on our way to Aix-les-Bains, and then Chambéry was in position to visit on the completion of the loop. Excellent!

The “problem” with Lake Annecy is that everyone else thinks it is beautiful which then makes the traffic terrible. Still, we enjoyed the views and the old buildings that were squished between the road and the shore. I imagine that when some of these homes were built there might have been less than a dozen people a day passing by. Not any more! We were in a parade a vehicles for miles, getting thicker and slower the closer we got to Annecy. In a fit of frustration I suggested that we move away from the lake and see if we could find a route that would get us into Aix-les-Bains via a “backdoor.” What a great decision that was! 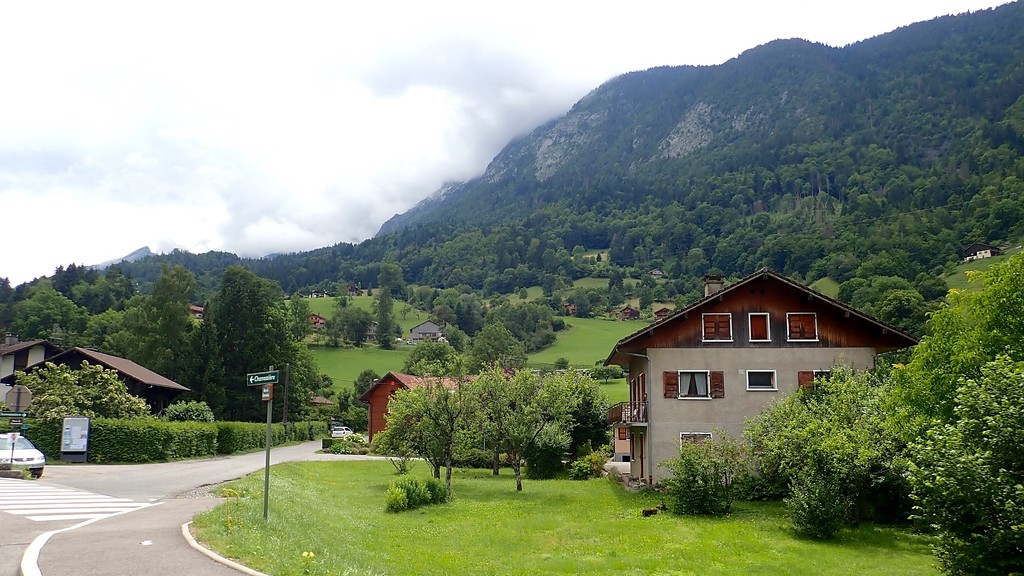 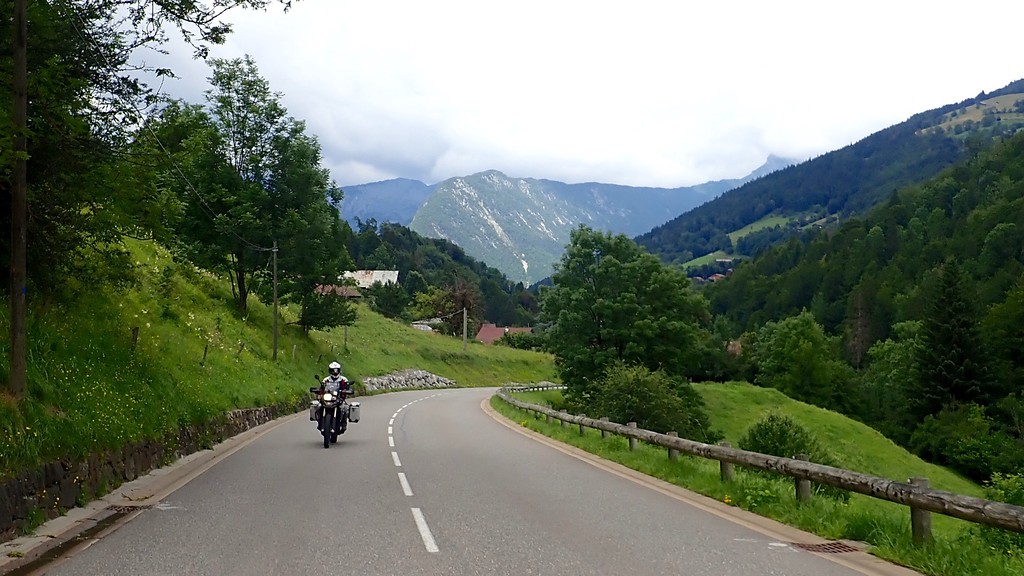 It wasn’t long before we had gained considerable elevation and could enjoy the peek-a-boo views of Lake Annecy in the valley below us. We were also starting to share the road with bicycles – more and more appeared the further up we went. Then I noticed the markers on the side of the road: we were on a major bicycling route, the Col du Marais.

Later, Dan was looking up the bicycle routes and found this cool website, useful for both bicycles and motorcycles: Cycling Cols/. I added it here in case anyone would like to reference it themselves (and so I can find it again later). 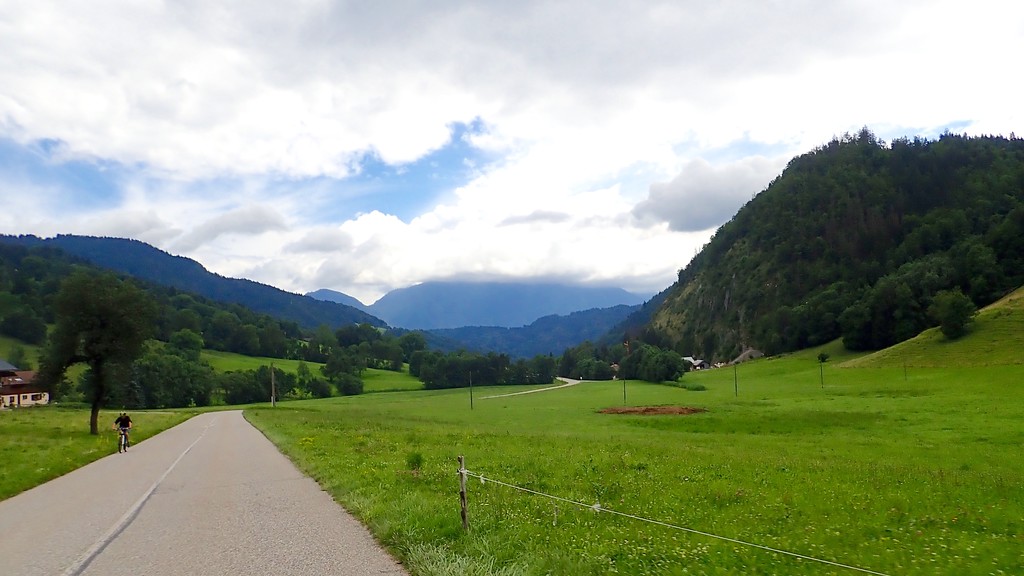 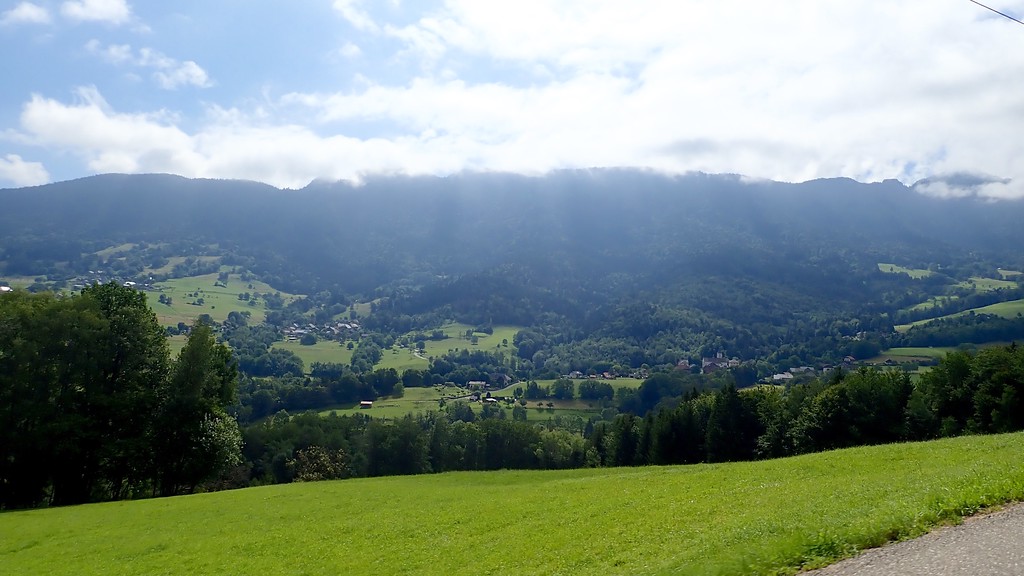 Oh my – look at that wiggly road! 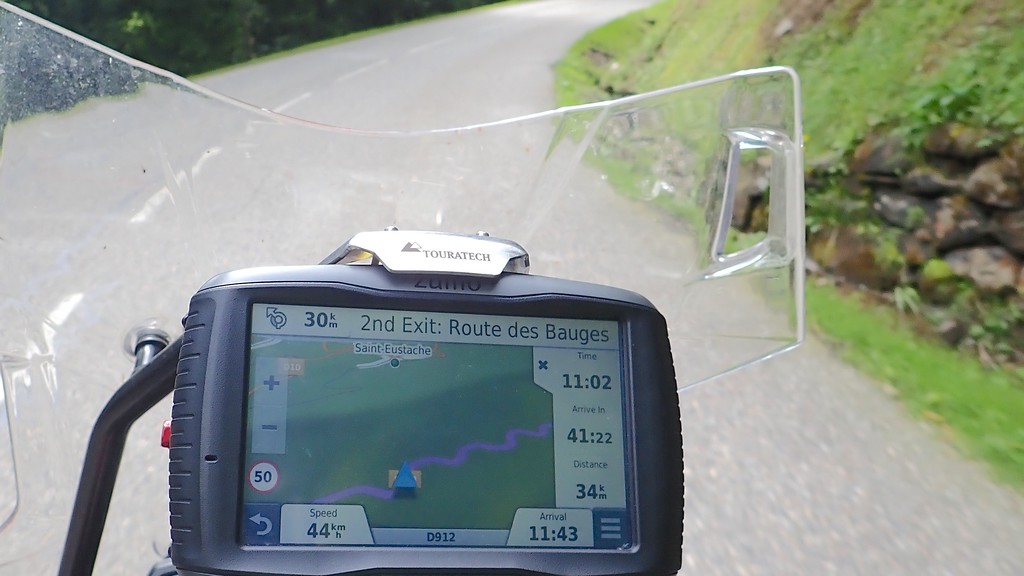 I was fascinated by the copper lanterns

We eventually left the bicycles and wide fields behind as we descended from what is apparently “Mont Revard.” The greenery crept in on both sides and the road twisted its way down. It had been a fun detour, and even more so because we had simply stumbled upon it.

The GPS dropped us right in the middle of the historic city center of Aix-les-Bains and we took the first available spot to leave the bikes. We had left the panniers on so that we could stuff our gear into them and walk around in our comfortable tourist clothes. The morning had been pleasantly cool, but I could tell that once the sun rose higher the temperatures would climb as well. It was going to be a hot day.

The streets of Aix-les-Bains were fairly quiet and empty. True, it was somewhat early on a Sunday, but I wondered how much the travel restrictions from other countries affected the number of tourists that would normally fill the narrow, historic pedestrian ways. 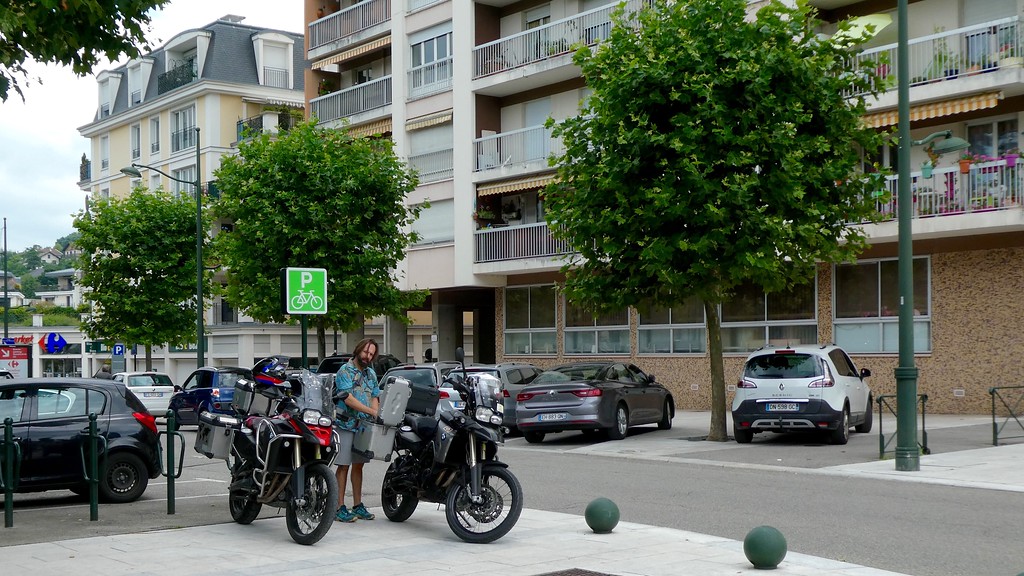 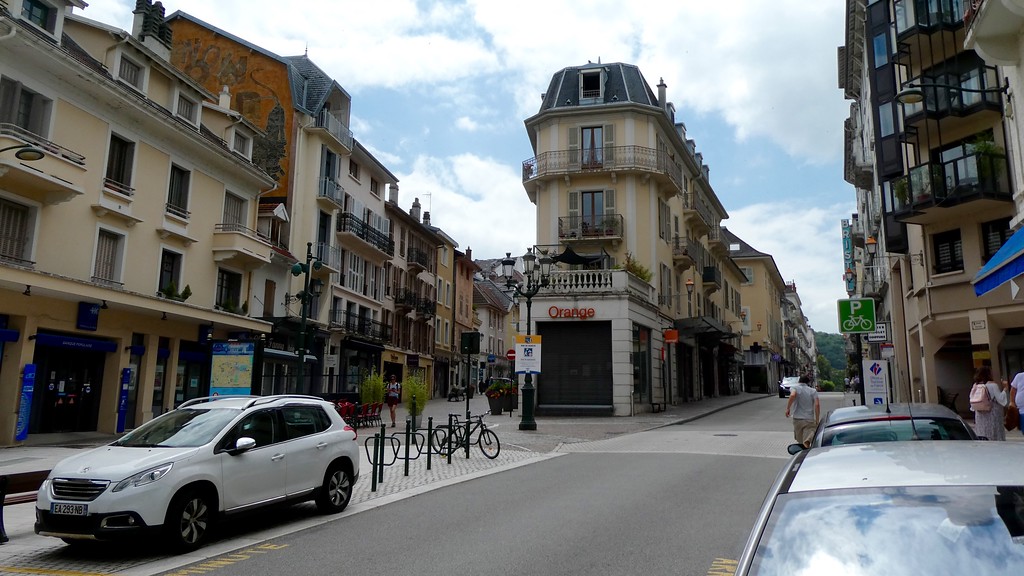 A famous mountain, “La Dent du Chat” (Cat’s Tooth) is nearby and the city has adopted the cat as their own mascot 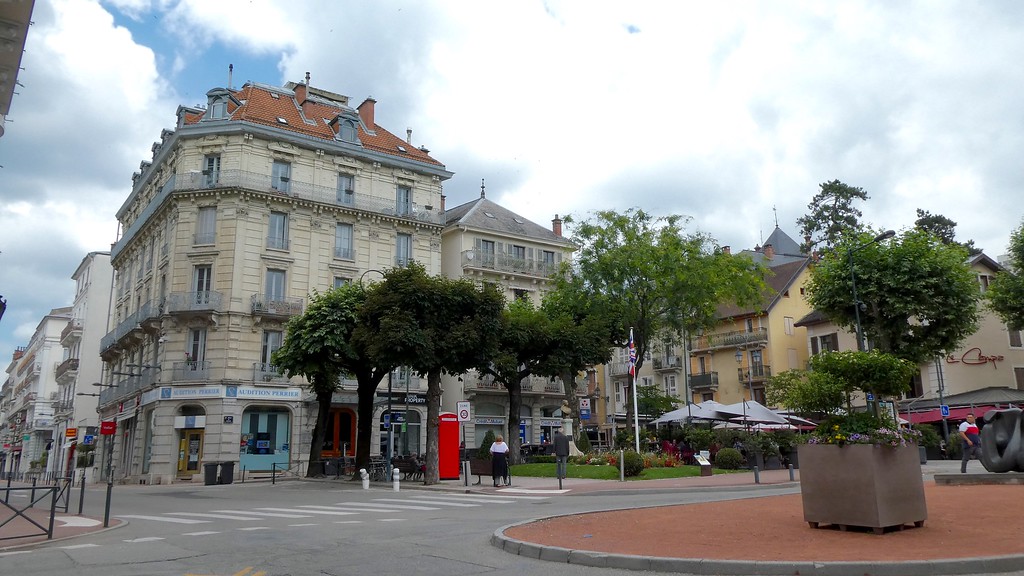 Lunch. I was ready to eat something and we scouted out our options. Again, it being a Sunday there weren’t a lot of choice. We circled back to Restaurant l’Ecuelle, which had a good amount of outdoor seating in the open plaza near their restaurant. We secured a seat in the shade of the awning, joining a few customers already seated and I perused the menu. BURGERS! I had been craving a good burger for months and I thought that this might be the chance. And even it wasn’t “good”, it surely wouldn’t be “bad”. I ordered a burger (with bacon, cheese and onions) while Dan ordered a bowl of mussels.

This was the best burger I have had in Europe. Juicy. Perfectly cooked. Good proportion of meat to bun. Generous coverage of bacon and cheese. Yes, this was a good burger. Oh, and Dan was happy with his bowl of mussels, too.

Our lunch spot – no photo of the burger 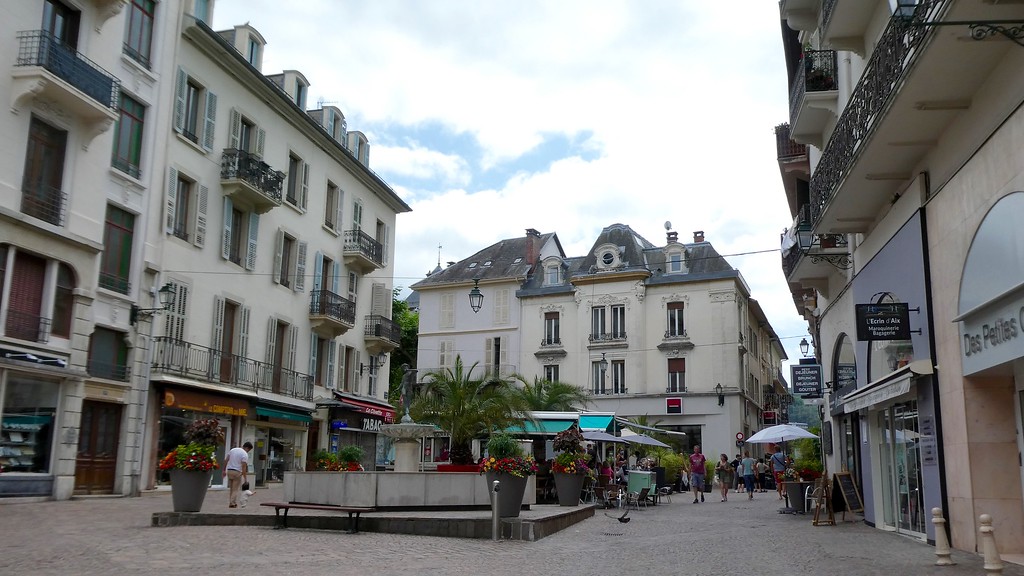 We walked around a bit more to settle lunch into our systems and then headed back to the bikes. We had another city to explore!

Leaving behind Aix-les-Bains, we almost immediately reached the shores of Lake du Bourget. Actually, we were both surprised that Aix-les-Bains wasn’t on the lake itself. It seemed like a reasonable thing do to, to build your town on the shored of a lake. Regardless, we were now heading south on a distractingly straight road. There was plenty to look at along the way, though, and the thick traffic kept us on our toes.

Dan was concerned that the heat was taking its toll and asked if we should just skip Chambéry. Nonsense I said! We’re here and we have nothing else planned. Besides, once we park the bikes and ditch our gear it was quite pleasant. The GPS once agin plopped us in the middle of the historic district of Chambéry and we chose to park next to another motorcycle. Safety in numbers, right?

The town was surprisingly large, even the historic city center. There was plenty of history to witness, since Chambéry was the capital of the Savoy region since the 13th century. Again, the streets seemed strangely empty considering the beautiful day in the height of summer and an obviously tourist-friendly place. This was fine by me, since many of my holiday destination choices revolve around “how can avoid most people?” As it was Sunday, not much was open and we amused ourselves by looking in windows and watching the few people that were out. 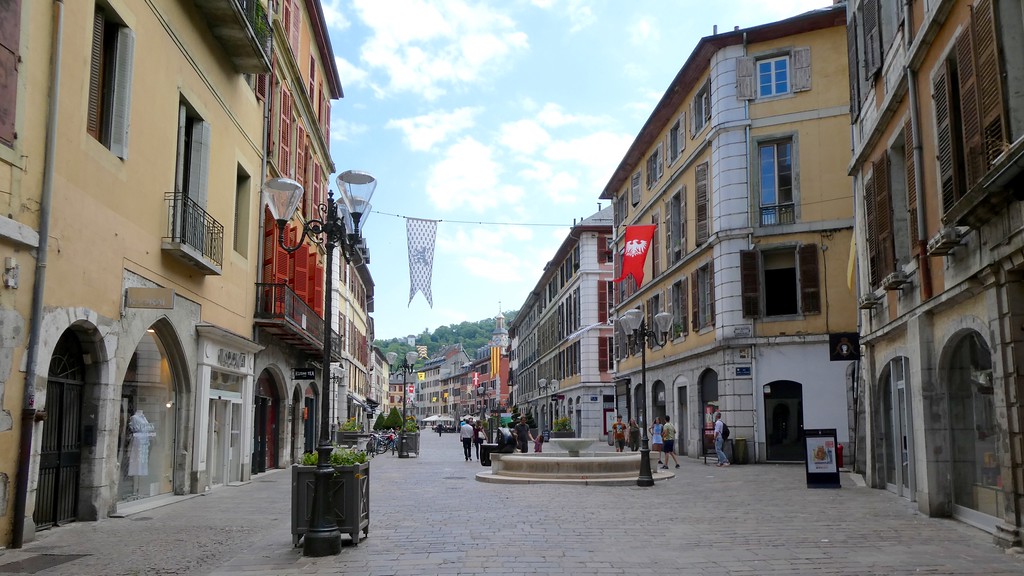 I joked that this was me: a long body and a tiny head 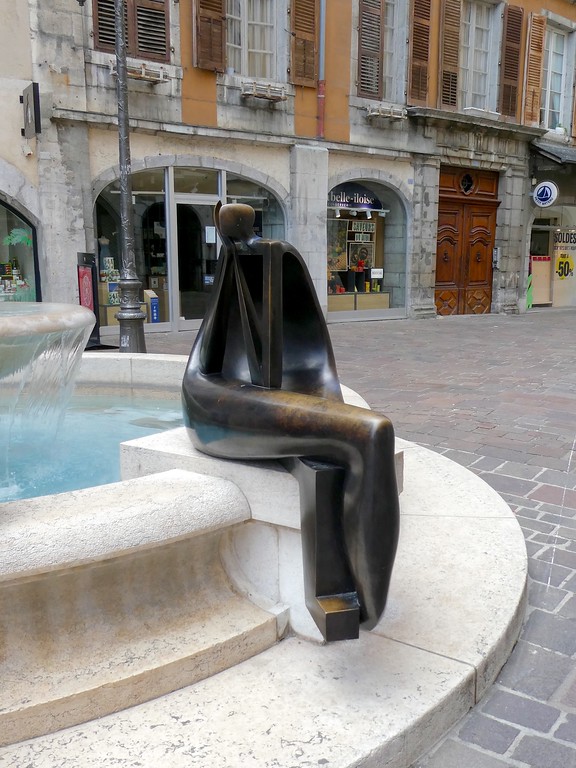 And the main reason I wanted to stop here was for something I hadn’t even known existed: an elephant statue. When Dan was surfing around on the internet the night before, he was looking up “things to do in Chambéry” and told me about it. Oh, that sounded awesome!

They were somewhat smaller in real life than I had imagined 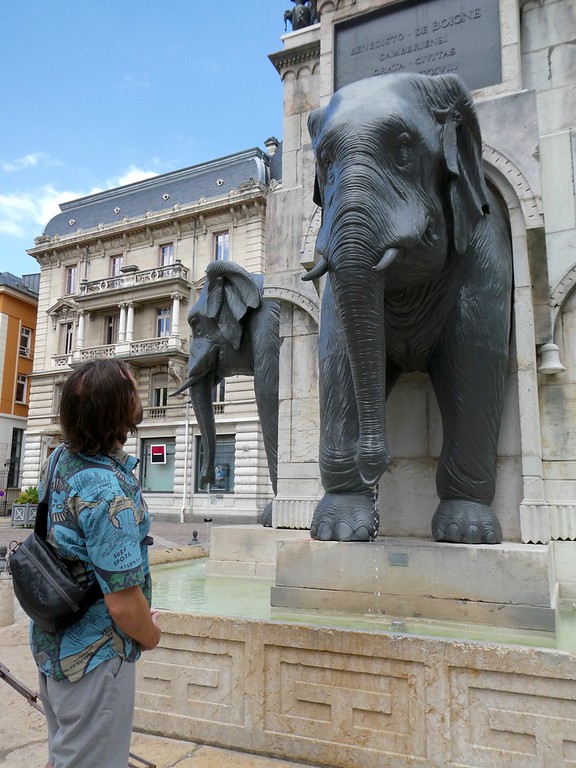 Built in 1838 to honour a local General’s feats when he was in India, the Fontaine des Éléphants (“Elephants Fountain”) is now the most famous landmark in Chambéry. I suppose having life-size elephants is probably better than having larger-than-life elephants, and certainly better than none at all. 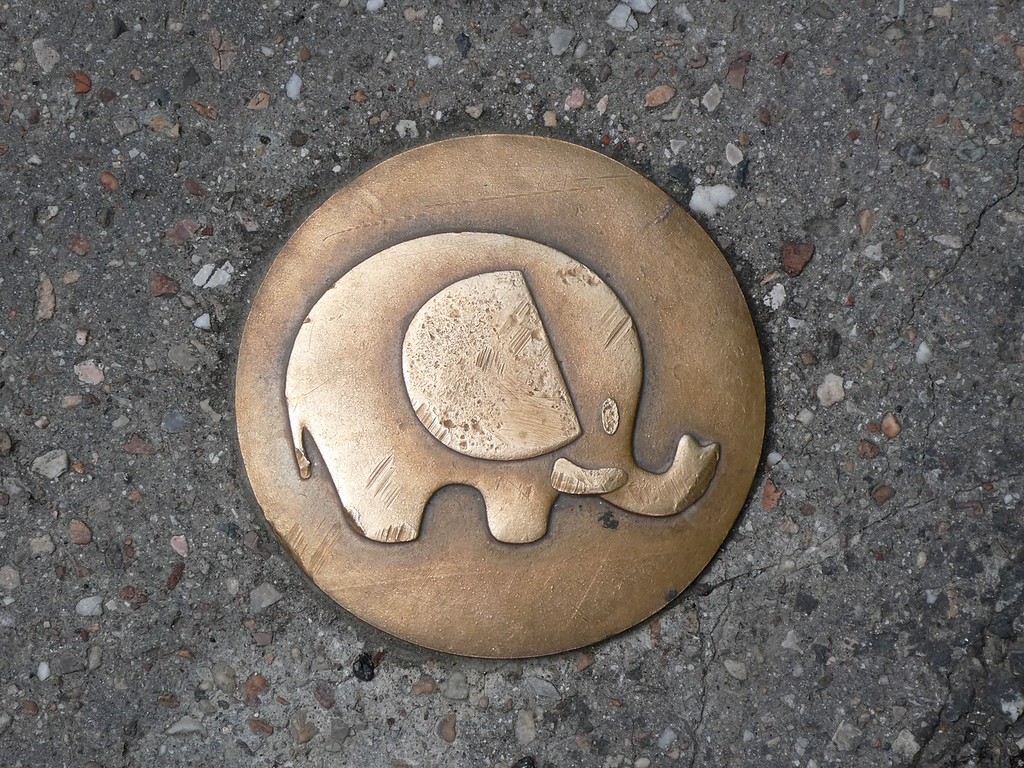 We managed not to get too lost, even though we found ourselves wandering outside of the historic district on our way back to the motorcycles. The city had been nice, but without getting deep into the architecture or history, we had reached our saturation point. Now it was time for a nice ride back to our hotel!

We had to thread our way out of the modern city sprawl that surrounded the peaceful historic center and avoid the motorway as much as possible, but eventually we were back on some peaceful “country” roads. Ah, it felt good to have the wind blow through my mesh jacket again!

The French love their colonnades – and so do I

We had another quiet night in our hotel room but were ready to keep heading south in the morning. There were new things to see and roads to ride!